Adding a nice series of missions, a beautiful jungle biome, and three new battlemech chassis to blow into tiny pieces, BATTLETECH: Flashpoint is a no-brainer for anyone who’s restored Lady Arano to the throne.

BATTLETECH: Flashpoint is the newest release from Harebrained Schemes, published by Paradox Interactive.

Flashpoint is the first planned DLC for BATTLETECH and I was lucky to get my hands on a pre-release version of it, so some points in this review may be a little bit out of date when the DLC is released. Flashpoint is focused mainly on end-game content, but don’t let that dissuade you if you haven’t finished the core game campaign yet; it adds a new game mode and many of the changes that come with it affect the campaign as well, so you’ll see them as you play regardless.

Presentation is much the same as the original game, though there have been a few additions and modifications. First is the new jungle biome, which looks even better than most of the game’s other biomes. Here you’ll find a small assortment of tropical flora, hilly terrain, and some great water features, including rain and waterfalls. It really does look excellent; different to the existing biomes, but consistent with them as well. I’m either going crazy or I saw a flock of birds fly past as my 100-ton Atlas tromped through their habitat, too! 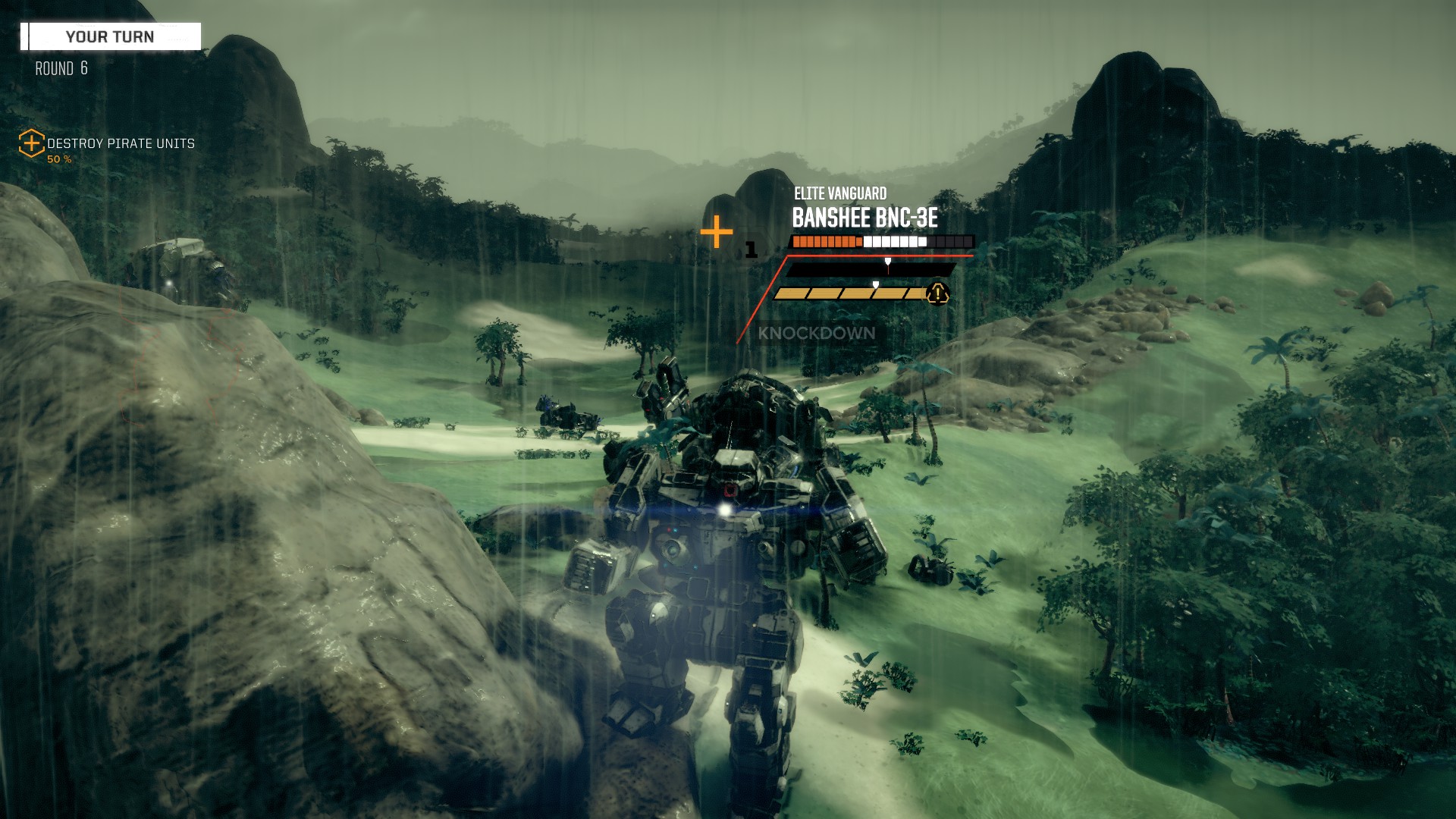 The game also adds three new Battlemechs, which all look great — especially the Cyclops; when it turns towards you it looks like it’s calculating whether it should shoot you or just squash you flat. 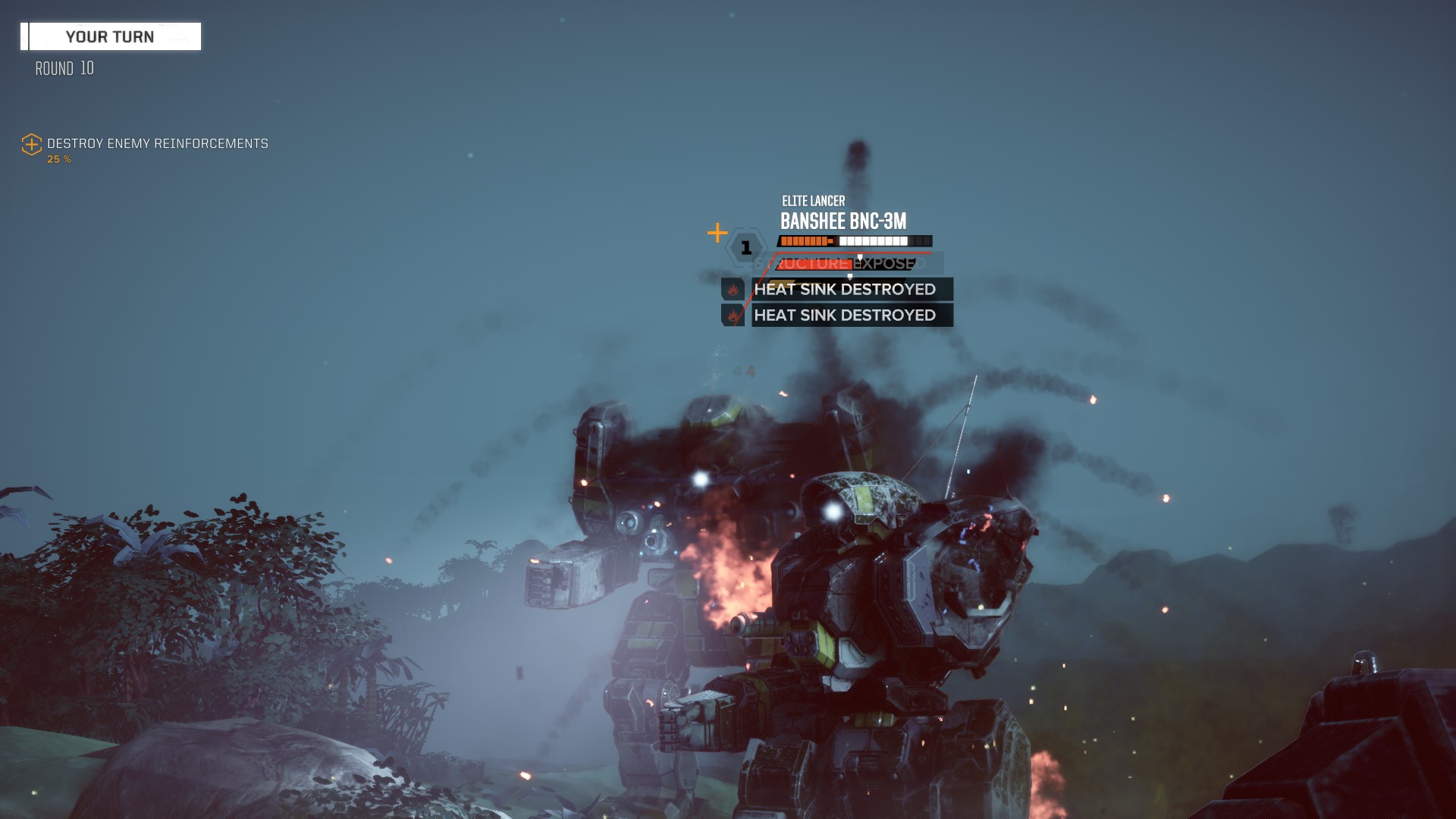 The combat user interface has changed a little, too, which, together with the core gameplay changes, threw me out a bit at first. There are a few more informational messages that show up when taking actions or attacking, such as “Cover (Bulwark)”, “Rear Attack”, and “Ignores Guarded”. These are a nice addition for anyone learning the mechanics, but also a good notification to an experienced player that one has actually done what one intended. Icons for some of the abilities have changed, too, which I found a little weird at first, but after an hour or two I was used to them; after much longer than that I can’t even remember how the old ones looked!

Out of combat there are fewer changes, the most noticeable probably being the addition of the hiring and target faction reputation gauges to the mission negotiation screens, showing how many points you’ll gain or lose for taking a mission, and with which faction.

I didn’t notice any sound or music changes. Voiced comments from some of your MechWarriors during combat are still hilarious. 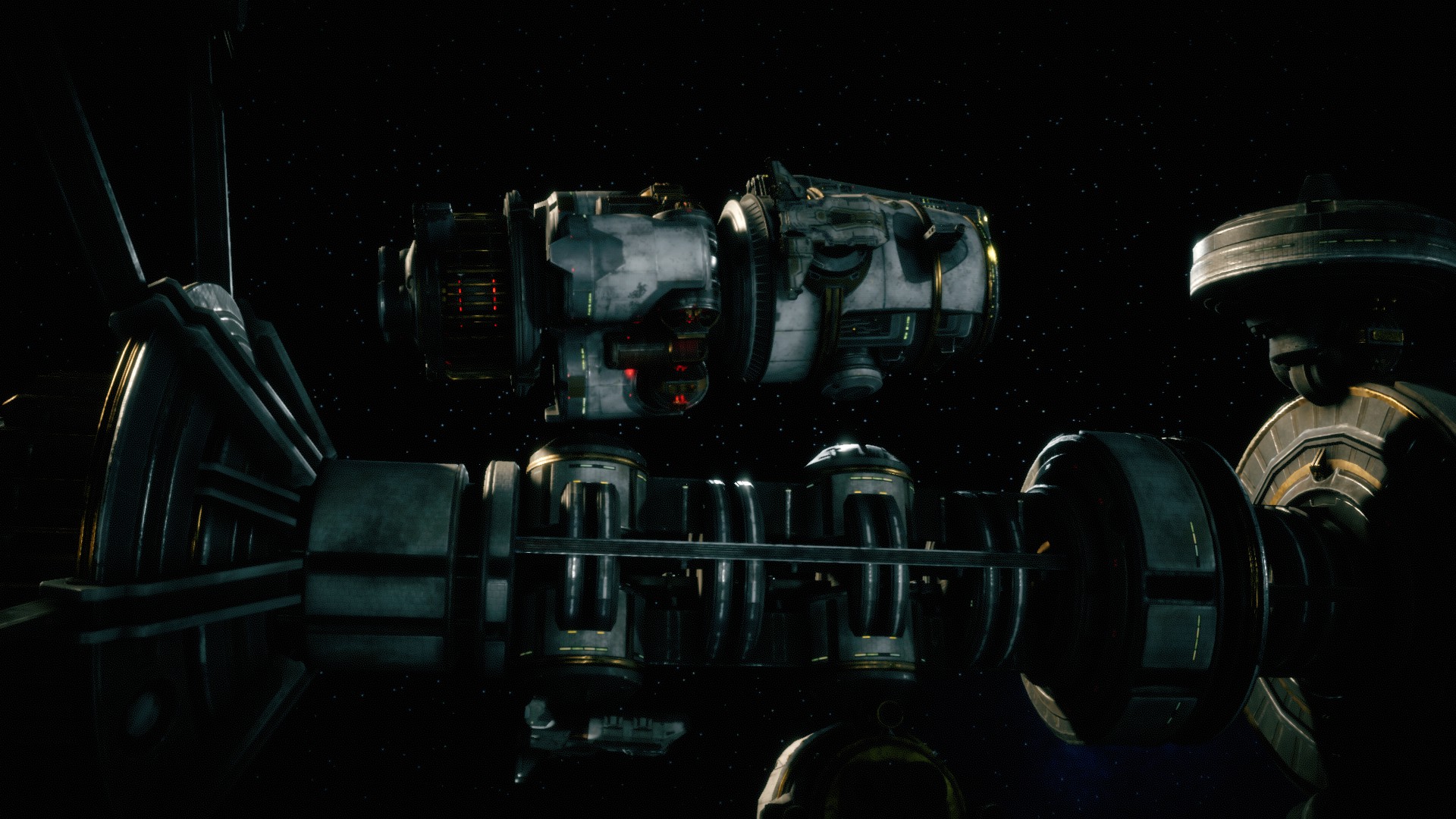 Overall the game still looks absolutely beautiful and still suffers from the same small presentation issues it had at the core game’s release, such as mechs occasionally clipping through terrain and a camera that can sometimes get stuck on the terrain when rotating and zooming. These are really minor, though, and after playing so much of the game I barely notice them anymore. It also still runs very hot, even with VSYNC on. (Maybe I need to get Yang to add another heatsink in the mechbay?)

BATTLETECH is a turn-based tactical combat game featuring huge bipedal war machines, each kitted out with tons of armour and weapons (literally). BATTLETECH: Flashpoint doesn’t change the core gameplay, but, coinciding with a major patch to the core game, it does make a few tweaks to a few rules here and there. More importantly, though, it adds a trio of new battlemechs, a new biome, new multi-part missions (Flashpoints), and a new game mode complete with a host of options to customise the gameplay to your liking.

I thought the new career mode would be the best of these changes, but I actually found it a little disappointing, mainly for roleplaying reasons. You see, you create a new character and your goal is to take your mercenary crew across the galaxy, fighting, earning C-bills, and increasing your Mercenary Review Board score as high as you can within 1200 days. But your mercenary crew turns out to be the same crew that featured in the campaign, and you find yourself on the Argo — the recovered high-tech cargo ship from the Restoration campaign. Even worse, the NPCs say the same stuff they said in the campaign, even when they’re talking about events that happened in the campaign — events that your new character didn’t experience. It simply doesn’t make any sense! So from a roleplaying point of view, it really fell flat. But it was still fun starting from scratch with a handful of light and medium mechs and some cash. 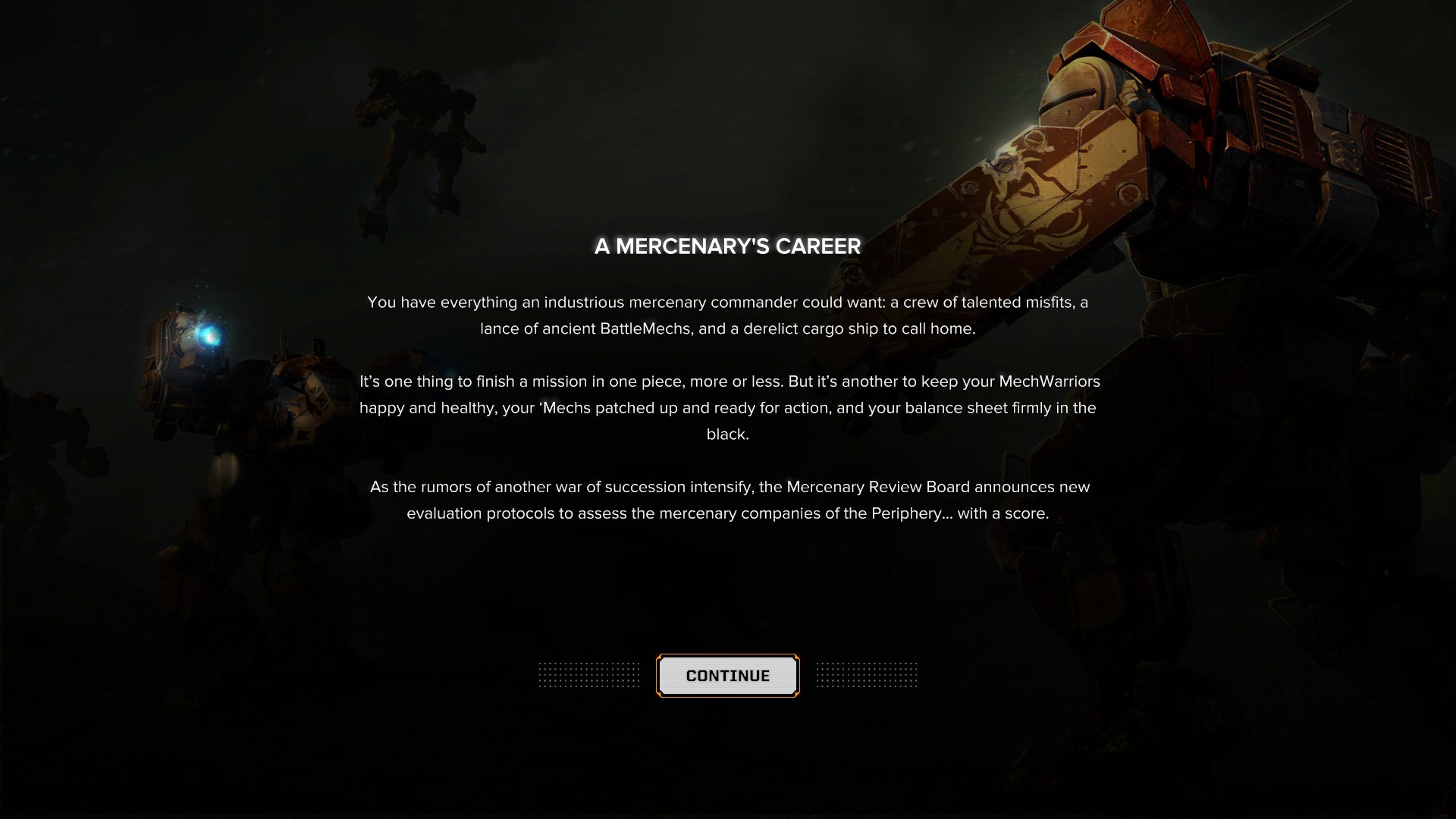 Discarding the career mode for the time being I instead loaded up my post-Restoration campaign mode save, complete with a handful of assault ‘mechs and a dozen or so heavies in storage, with highly skilled MechWarriors to pilot them. I was told I had to re-spec my MechWarriors, thanks to the major ability changes in the new version of the game. Juggernaut is gone, bulwark is … different … and there are some new names and icons. I restored their abilities as best I could remember, after reading the new descriptions, and then travelled to a new star system.

I found myself in a jungle mission against an assault lance, complete with a ‘mech I’d never seen before, but which looked rather scary: a Cyclops! The driving rain beat down around me as I crashed through the tropical trees, avoiding caustic spores and enjoying the extra cooling that the torrential rains provided. I made short work of the Cyclops and its kin. The ability changes took a bit to get used to, but I like them! They switch up combat a bit, making my previously lazy bulwark-ers earn their keep for a change! 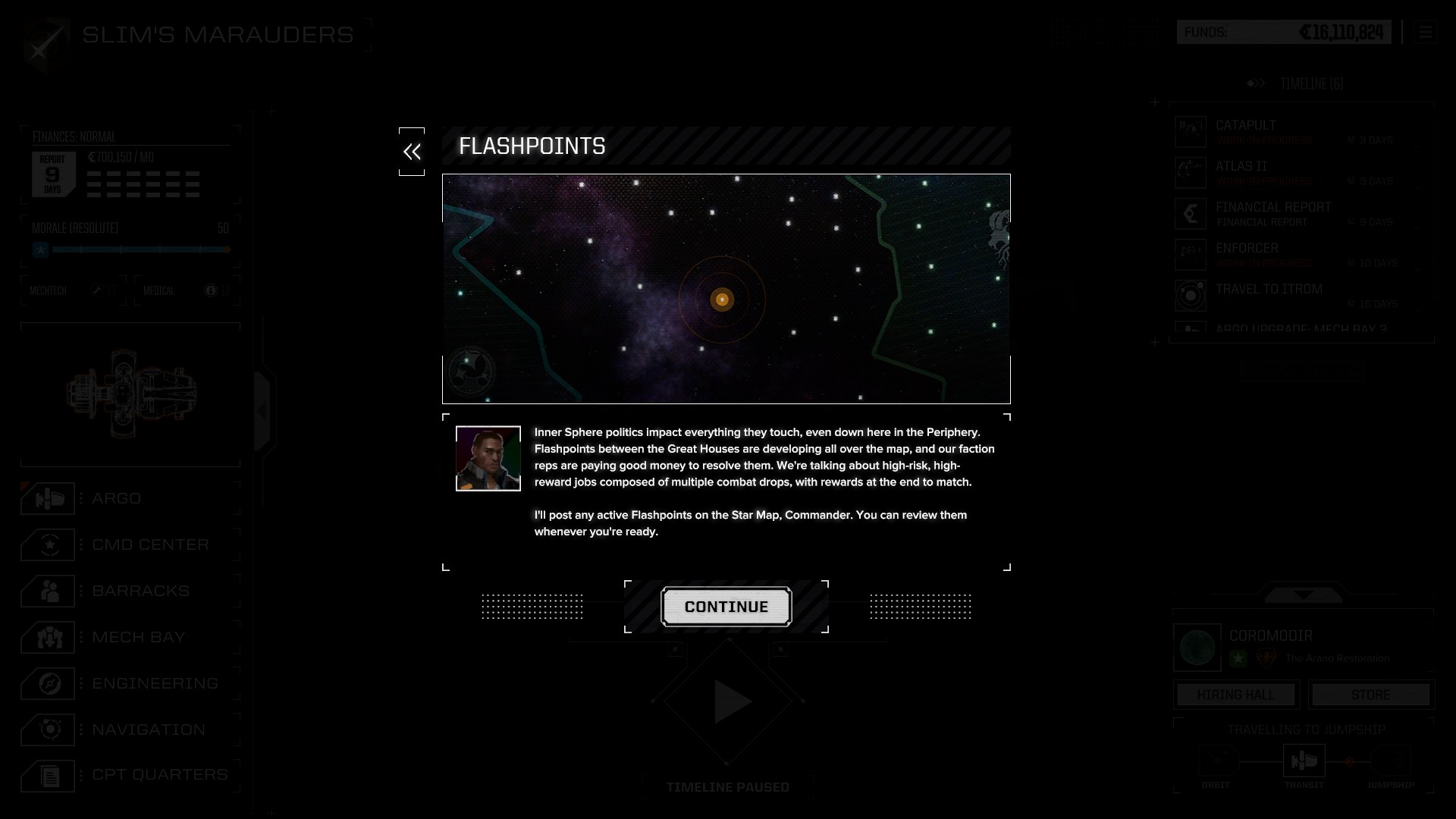 After enjoying my tropical holiday with the Cyclops, I found a Flashpoint awaiting me when I returned to the Argo. This is like a micro campaign: a little NPC-introduced short series of missions with a set goal, typically tied up in the ever-intriguing politics of the ruling Houses. I haven’t seen them all yet, but these seem to appear on the navigation map after a certain action or time passes, staying around for many months so you have time to travel to their host systems to undertake them. These are where the heart of the DLC lives: not quite a new campaign, but tied in well with the end-game campaign and new career modes, and offering a very welcome reprieve to the fun, but sometimes unfulfilling, endless stream of normal missions. Completing a Flashpoint awards you with plenty of experience points and C-bills, too, not to mention an assortment of very useful rare items. But as with the core campaign missions, Flashpoints don’t appear to scale difficulty; take them on too early and you’ll struggle, or too late and they’ll be a cakewalk. 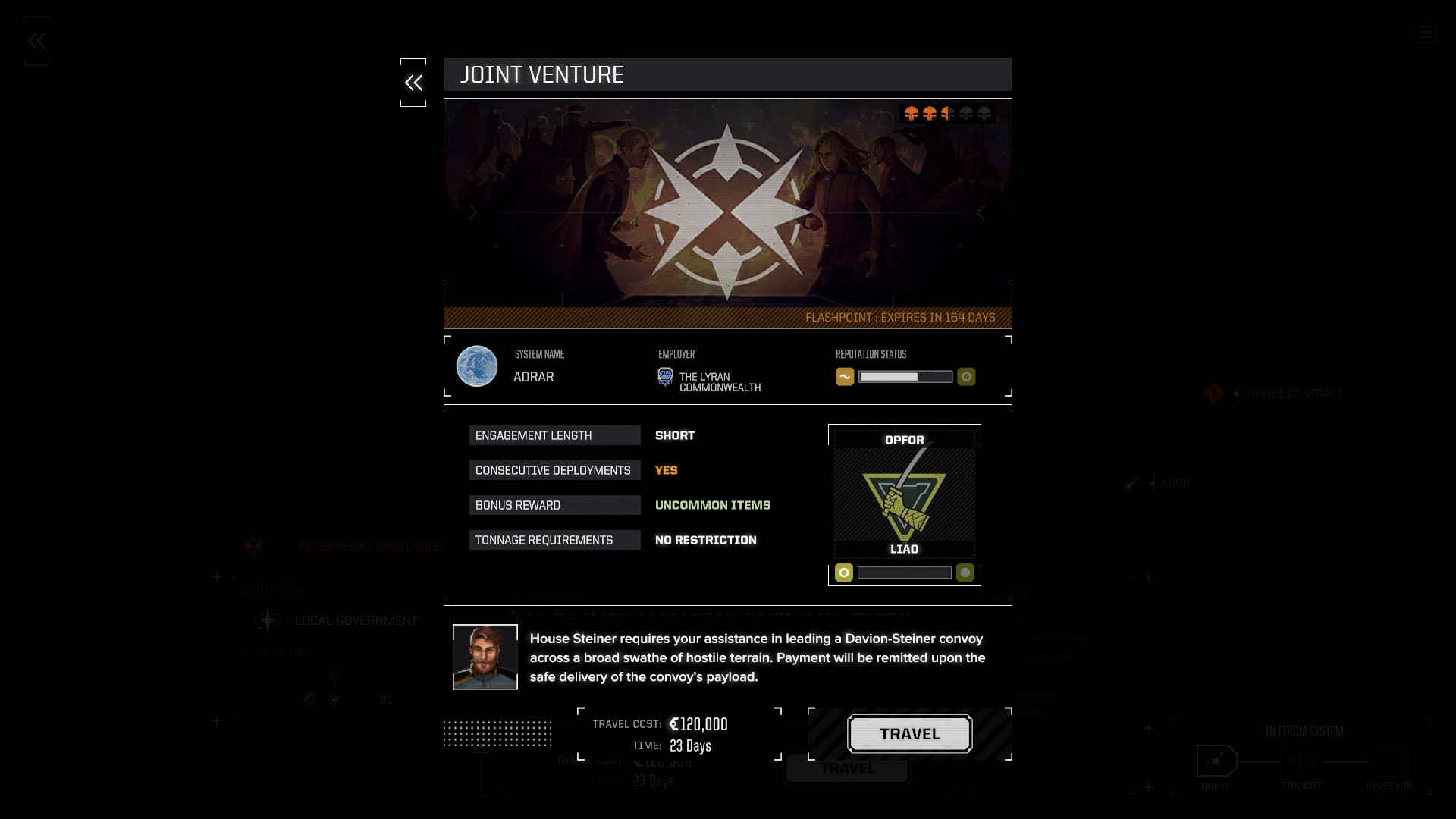 Other improvements are minor, but worthwhile, including the interface improvements mentioned earlier and the new, more detailed faction system. There’s a trade-off now between taking every mission you can, reputation be darned, and picking and choosing missions to direct your relationships. Take pirate missions in a system and the ruling governments will probably hate you, but you’ll gain cheap access to the new black-market shops in the system. Play off ruling Houses against each other and you may find yourself allied with one, unable to work for the opposing House or take any missions that would break your alliance. It’s not a particularly deep system, but it’s a nice addition nonetheless.

Enemy AI seems altered, too. I’m not sure if it’s more intelligent — it does some crazy things! — but it’s no longer quite so suicidal. Some of the Flashpoints limit drop tonnage, encouraging you to keep at least a couple of lighter ‘mechs about, but unfortunately the procedurally generated missions still don’t do this, so you’re always better off with greater tonnage. I’d love a bit more variation.

Related to that is the difficulty of missions. I still don’t understand why I can’t pick easy missions once I have assault mechs; if I want to spend my time squashing Locusts and kicking Commandos rather than facing off against Warhammers and Banshees then I should be able to, big money and salvage be damned! But minimum difficulty continues to increase as you play, locking you out of the easy pickings. 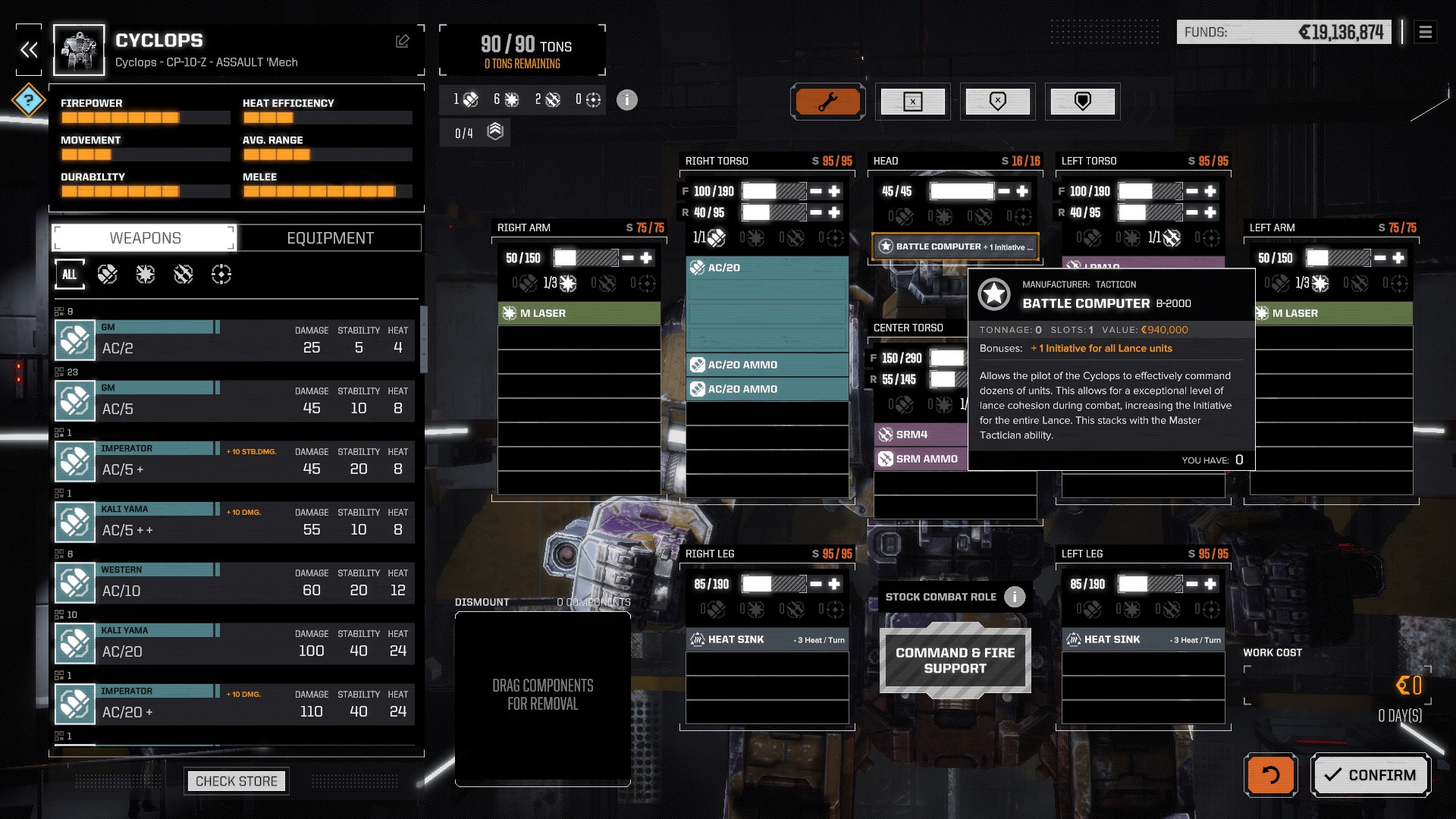 There are a few other minor issues that remain that still annoy me, too: loading times, of course; any combination of ‘mech head damage, torso destruction, and ammo explosion in a single attack will only do one point of damage, rather than up to three; and there’s no way to tell escorted vehicles to halt, making escort missions frustrating. A stop/go control on each escorted vehicle would be invaluable.

BATTLETECH: Flashpoint is not quite what I expected, but it’s still a great addition to the game.

Flashpoint adds a decent amount of new stuff: mechs, missions, and a biome. It evens out some of the gameplay, though these changes will be included in a core game patch as well anyway, and it provides a number of options to customise your game, but some minor issues from the core game remain. The new Flashpoints are very cool, as are the new biome and mechs (if a little overpowered in their specialities), but the career mode is disappointingly cribbed from the campaign; it would have been much better with a different ship and crew.

Flashpoint is an evolutionary improvement rather than a revolutionary one, but if you like BATTLETECH, you should definitely pick it up.