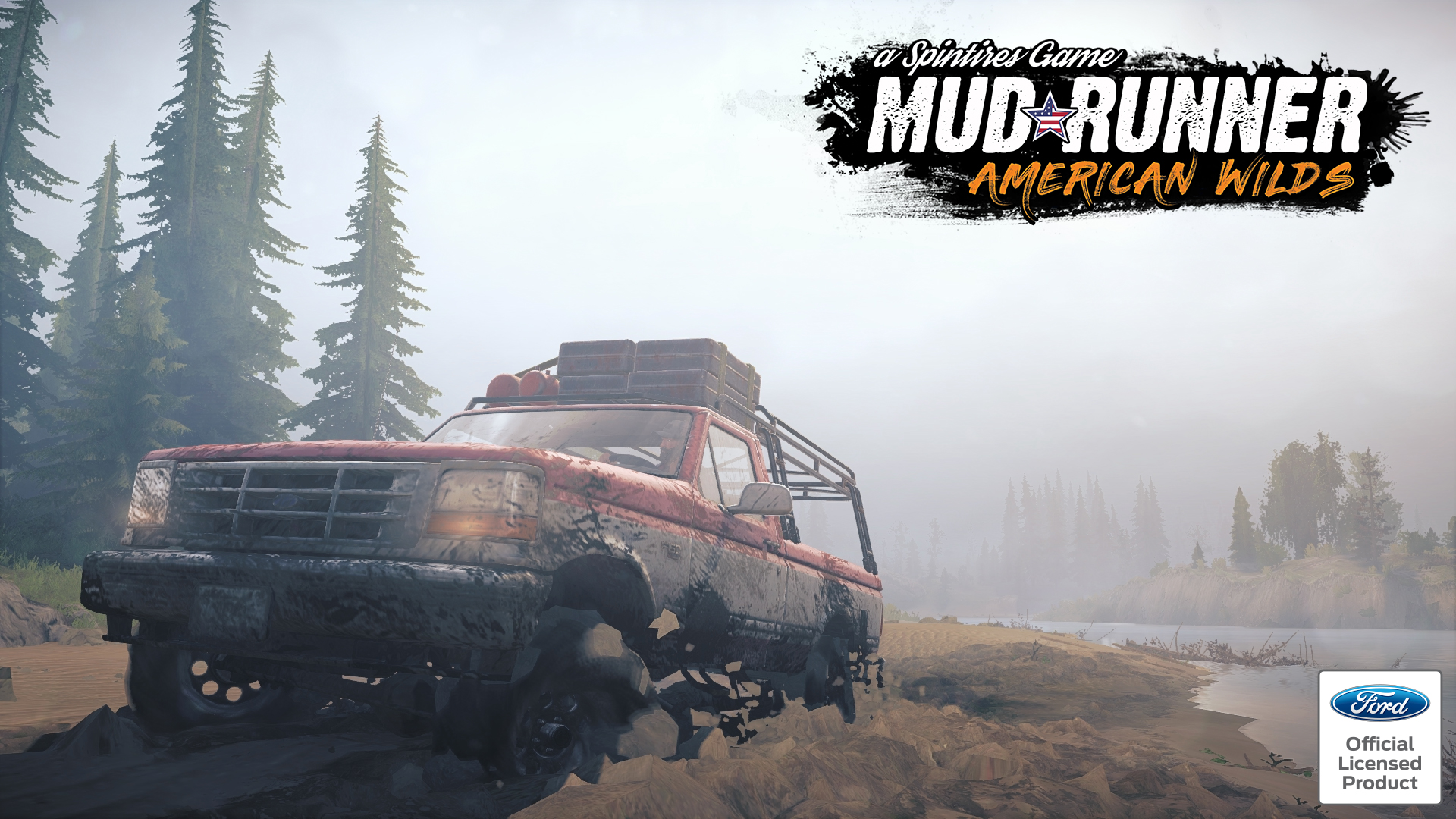 You wanted trucks! You got ’em. You want muck! we have it. Get deep down and dirty with the new MudRunner: American Wilds.

Upgrade your Spintires: MudRunner with the American Wilds Expansion.

Enjoy a slew of new additions, including 7 iconic US trucks from household brands like Ford, Hummer and Chevrolet, dozens of new vehicle add-ons.

For folk fresh to the franchise please check out my review of the base game. This details all the upgrades and gameplay basics from the original Spintires that was released back in 2014. Mudrunner has come along way since last years launch and rebranding. There have been numerous updates and extra features added. Two free DLC packs have added, new maps, and vehicles. Perhaps the most significant addition has been the implementation of Steam workshop support. This one feature is, in my opinion, the most important for the longevity of the whole series. The sheer amount of community made content available to all is staggering.

Included in the game is a handy dandy tutorial. This guides novices through the various camera controls and basic vehicle handling. It also illustrates how to engage the differential lock and all-wheel drive modes. Changing trucks and unloading logs is also covered. Its a basic introduction to all the main mechanics. It’s not stellar but does the job admirably.

The main menu and content selection haven’t been altered compared to the main game. You can select singleplayer (which gives you access to the 10 sandbox maps including the new American wilds ones), challenges, tutorial and multiplayer. 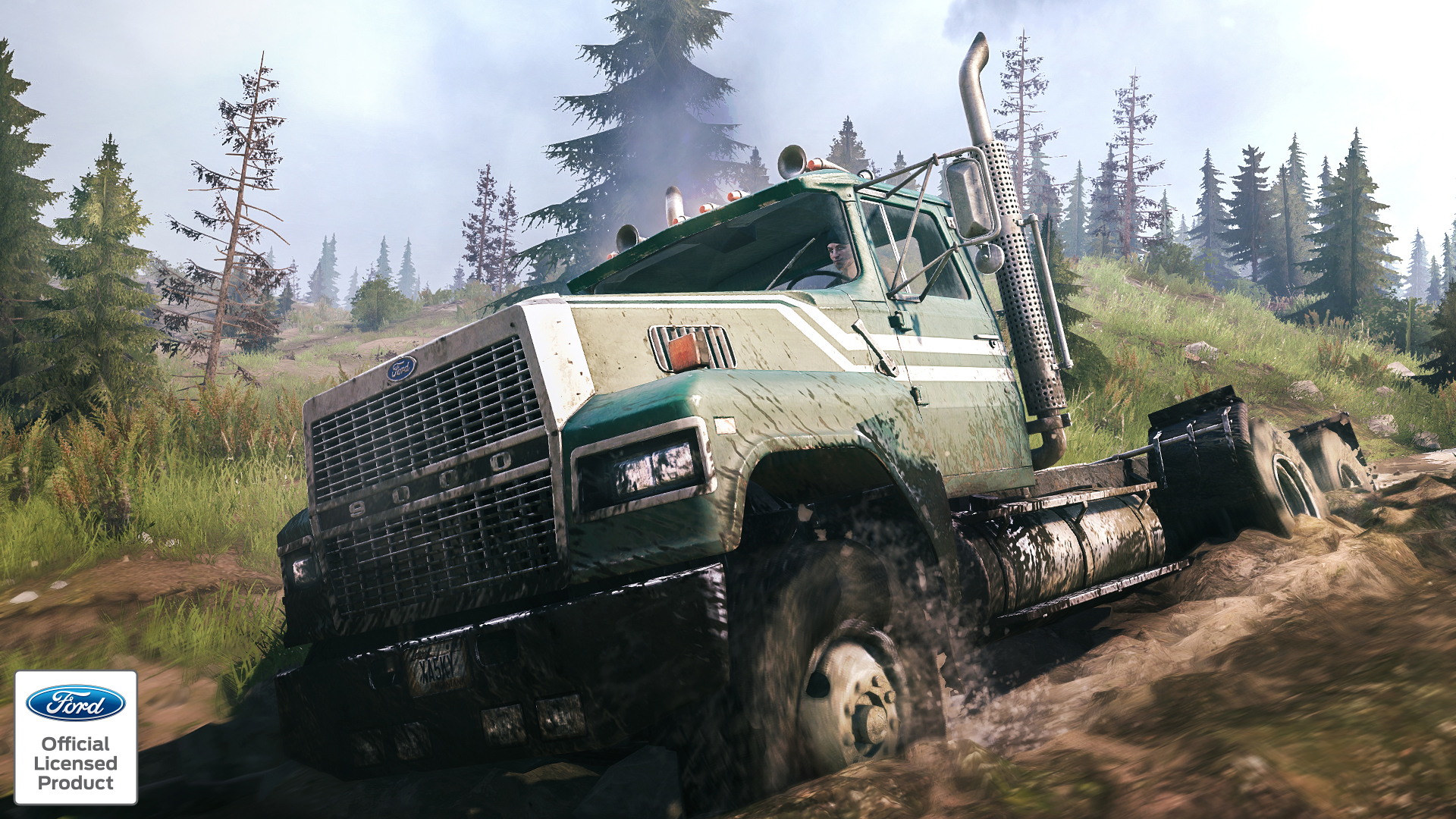 The community has been clamouring for American themed content for some time. The original game was steeped in Russian vehicles and the whole culture that surrounds them.
Sabre has duly obliged and delivered two new maps to explore. They have even gone the extra mile and sought out fully licensed trucks and off-roaders, a first for the series.

Now I’m no petrol head nor I am learned in American truck culture, so all these new vehicles are all completely fresh experiences for me. Whether they accurately simulate or portray their real-life counterparts is way beyond my level of expertise. I can only describe my time with them in this beautifully coded sandbox environment. 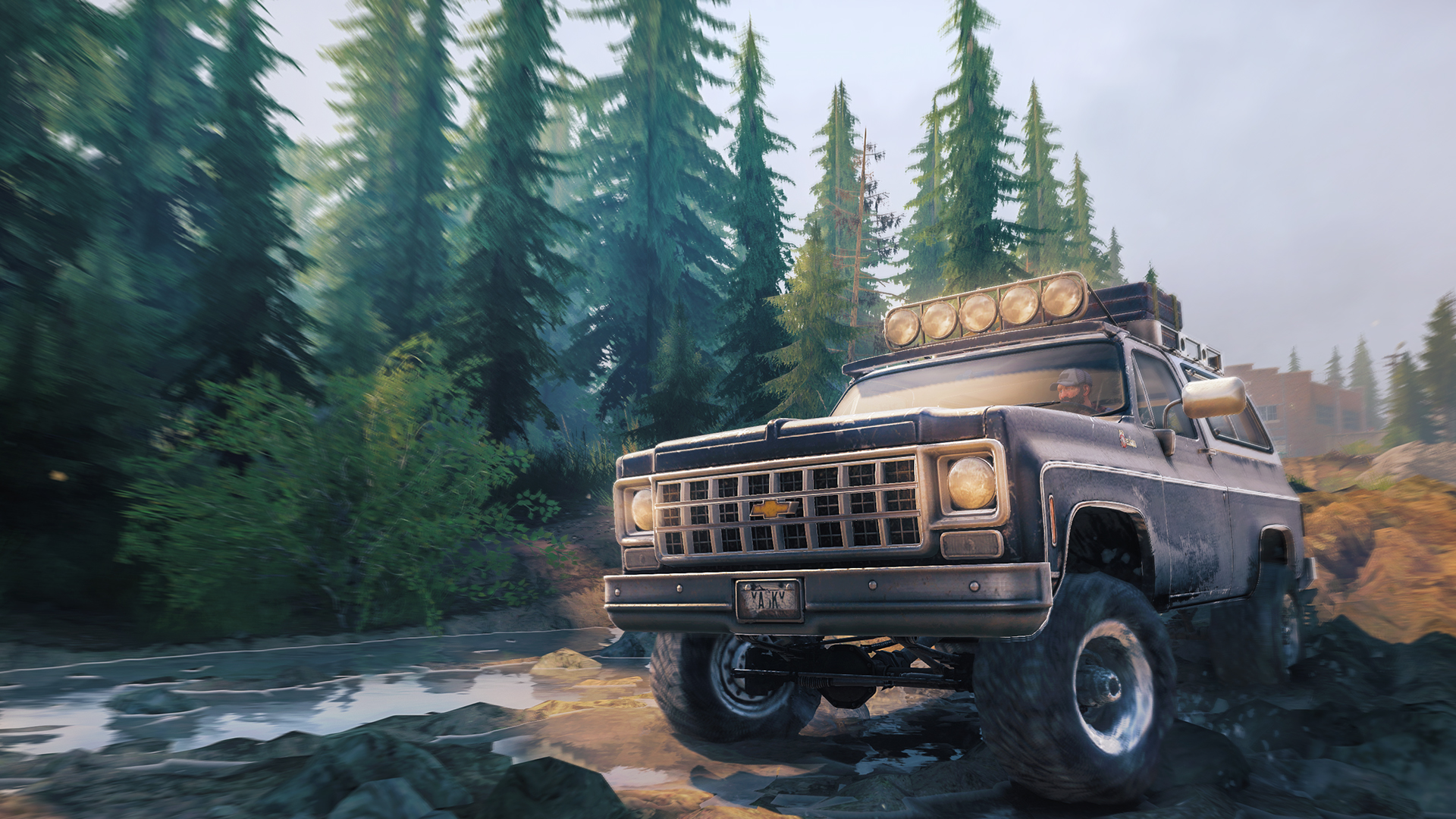 One of the new scout vehicles is the Chevrolet K5 Blazer, a classically styled pickup truck. This SUV packs a lot of grunt under the hood. It’s perfect for recon duties. I felt right at home as soon as I fired up this puppy. Even from my short time with it, it seems far more powerful and capable than my beloved UAZ-469 ( My “goto” scouting “jeep” from the main game garage). Sharp inclines and dense thicket are no match for this beast. The high ride helps to traverse small rivers and rocky trails. It’s a great addition to the massive fleet of trucks to choose from. More positives stem from the fact that it can carry quite a load of support kit. Bumpers, lightbar, roof trunk and spare wheel can all be attached at the local garage. These add-ons give you extra fuel and repair points. Great for long-range missions to the back of beyond.

My favourite from the new roster of vehicles is the K-8400 Skidder. This is based on a proper logging utility machine. Its primary task is to move fallen trees out of the forest and drag them close to roads/tracks so that they can be loaded onto transports. Due to its sheer power, it can also be used as a support vehicle to pull stricken trucks out of the mire. It can also pull a variety of trailers ranging from fuel tankers to repair units. This marvel of the modern age is a big boys power fantasy made real. The shiny red livery, massive tractor style wheels, and gleaming front blade are a joy to behold. It can plow through most terrain without blinking, leaving a trail of devastation in its wake. 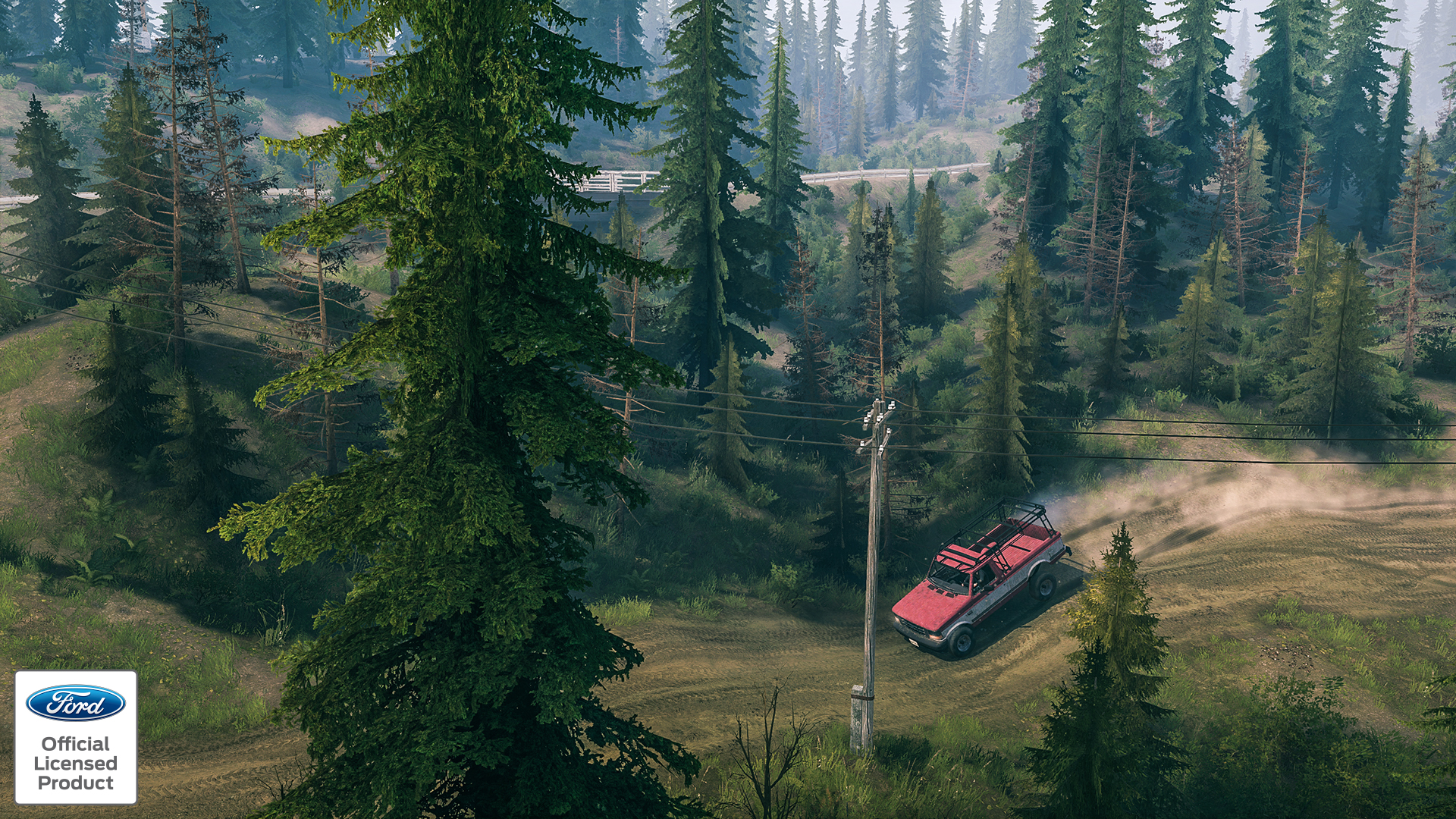 The creation of the two new areas to explore has been tempered with the knowledge that the new big rigs have no offroad capabilities. This has meant that both maps share much of the same design DNA. There’s a lot more standard tarmac than found in the Siberian based maps. This isn’t a deal breaker but limits the scope of environments to some degree. Given that the US probably has more road infrastructure than the depths of the Urals is not beyond the realms of reality. They are still vast and sprawling, with plenty of square miles of untamed wilderness to explore.

Mudrunner’s appeal is that it can be played in various ways. One path as a hardcore no-nonsense logging simulator. With the new Skidder addition, this is now feature complete. Every logistical step of the lumbermill process can now be re-enacted. Play on hardcore mode without vehicle respawning and it’s an almighty challenge. My preferred gamestyle is, on the other hand, far more casual. I love to simply explore the environment and try out all the various trucks. Getting stuck in the bogs /marshes is all part of the fun. Strange as it may seem I find the game relaxing, it’s my goto zen experience. No goals, no time restrictions, no penalties for playing the game the “wrong” way. 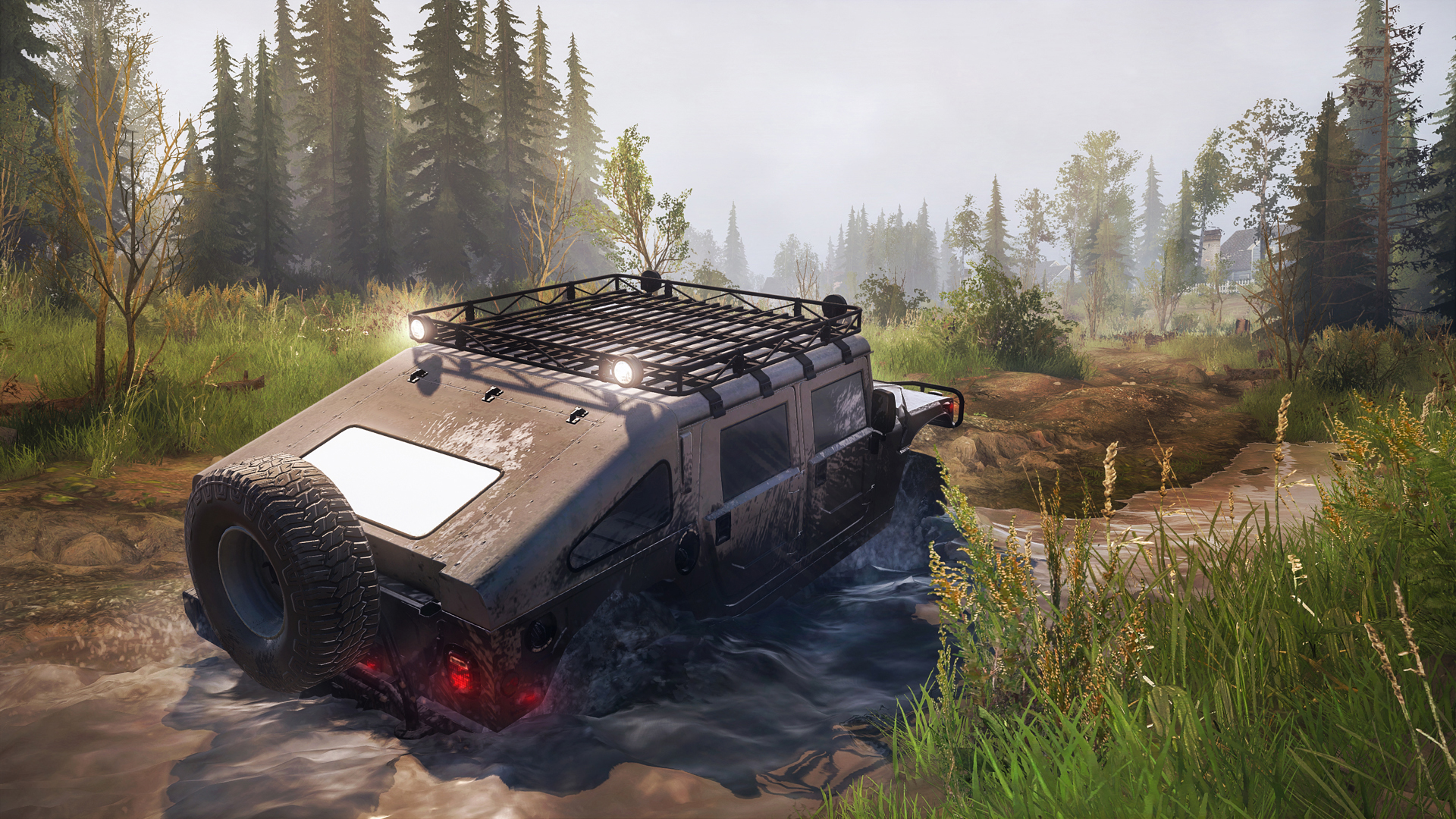 No major improvements to the graphics engine have been implemented over the past year. The same mud technology which makes the game so unique has not seen any significant upgrades. The one stand out facet is the lighter and more vibrant colour scheme used for the new US maps, compared to the murky and gloomy Siberian forests of the original game. This a breath of fresh air and gives the game a more welcoming aesthetic for folk new to the series.

Along with the fresher feel, Sabre has added a host of new building prefabs to enrich the maps. Dilapidated shacks have been replaced with homesteads, replete with white picket fences. Run down fuel stops have been upgraded to red brick gas stations, with period style pumps and forecourt awnings. Logging camps also get a new look. These are now sprawling lumberjack mills, with transport yards and wood stockpiles. Outside of the small townships which pocket the maps, the refresh has also been extended to the natural world. General foliage and forests are much more verdant and vibrant. The overall density of grass and shrubbery appears to have been increased. This lush vegetation adds a pleasant summer vibe to proceedings.

More detailing is to be found by the level of road signage. These pepper the ring roads that skirt the perimeter of the maps. Speed limit, water hazard and rock slide warnings are frequently scattered by the tarmac veins that bisect the wilderness. Even though this is a minor cosmetic addition, it adds greatly to the “environmental storytelling”. Also crashing through these signs is always good for letting off steam. A little bit of reckless behaviour in an offroad sim never did anyone any harm. 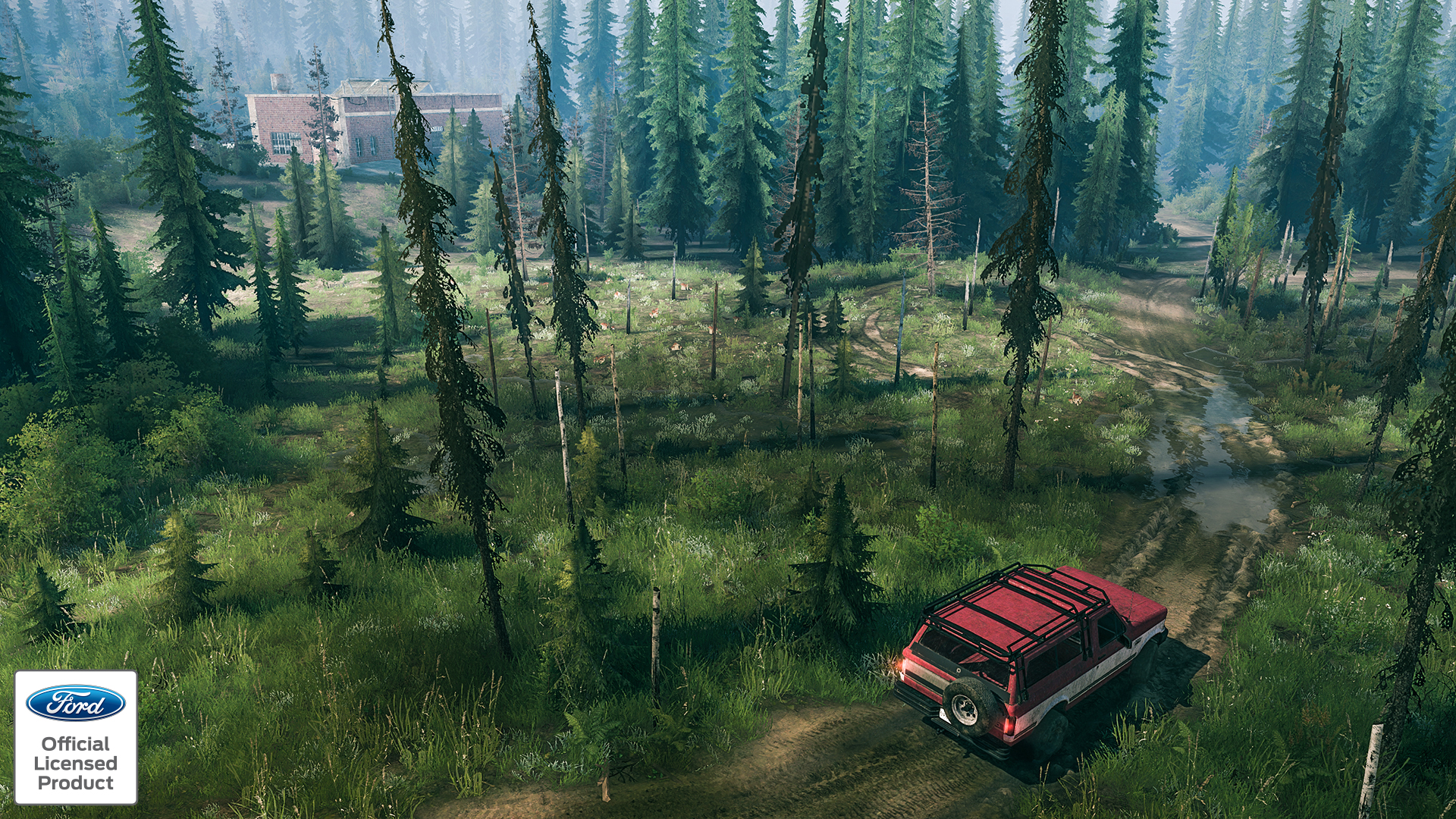 The sound design of the new trucks is splendid. Air brakes gasp, Diesel engines reverberate and rattle with a primaeval throb. The sense of powerful machinery at your fingertips is palpable. I defy any manchild not to get a warm glow of satisfaction from hearing a big rig roar into life. And that is what this game is all about. There is a timeless appeal of being let loose on natures wonder whilst encased inside these metal behemoths. The sonics add to the pleasure.

Such attention to detail hasn’t been carried over to a couple of the truck horns, however. These samples are the same as the stock game SUV’s. They sound weedy and anaemic when triggered by mighty rigs such as the Freightliner or Bison. This small point totally breaks the immersion of the game for a spell. It seems completely at odds with the sterling work spent on the engine noise recordings. 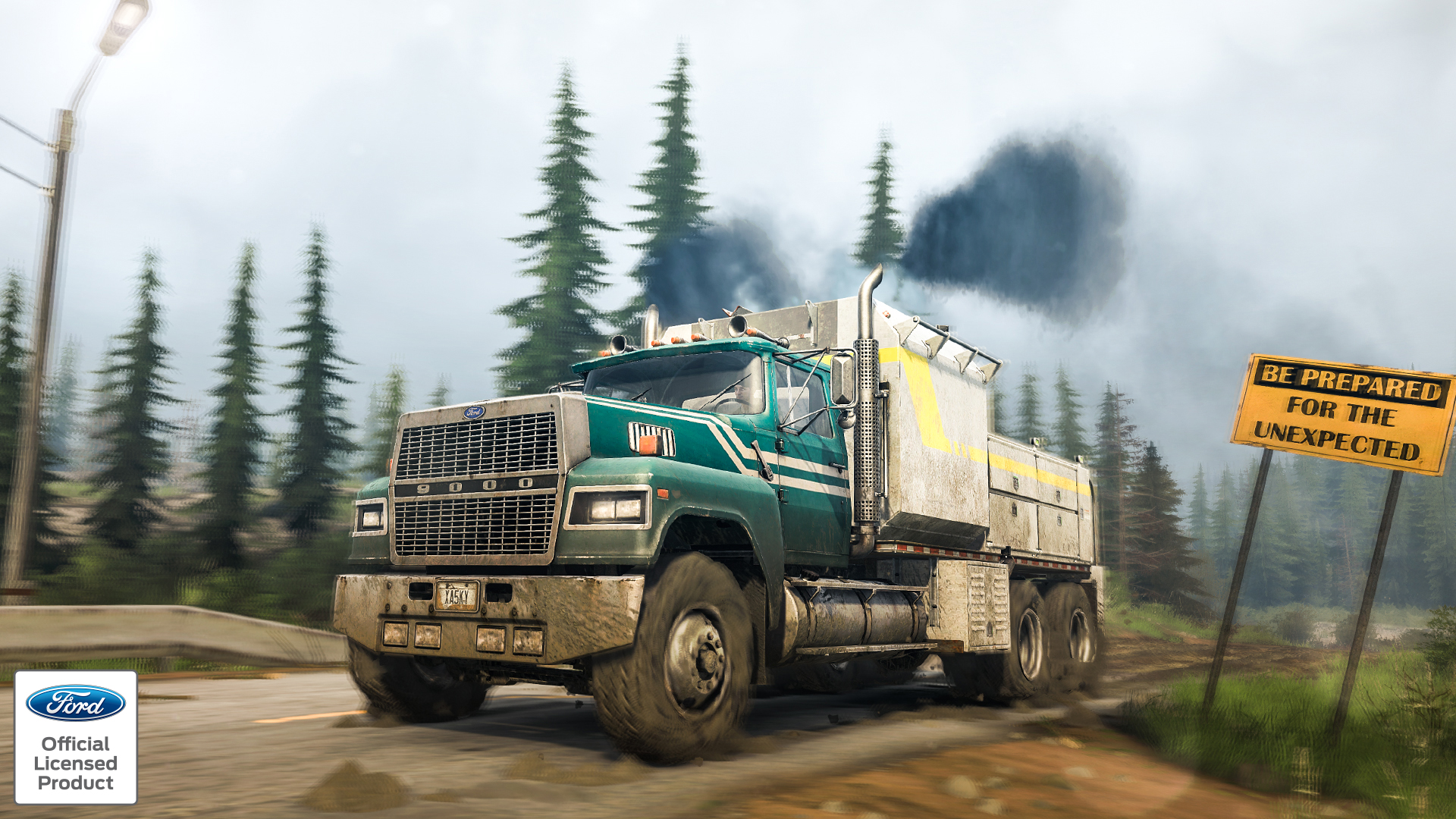 It would be remiss of me not to highlight some of the great user made content that has been created over the past year. Steam workshop support now enables both new maps and vehicles to be loaded into the game. The breadth, scope and the sheer number of these mods are mind-blowing. Here are a few of my favourites from the massive library of content available. All the following have been given a five-star rating by the community. 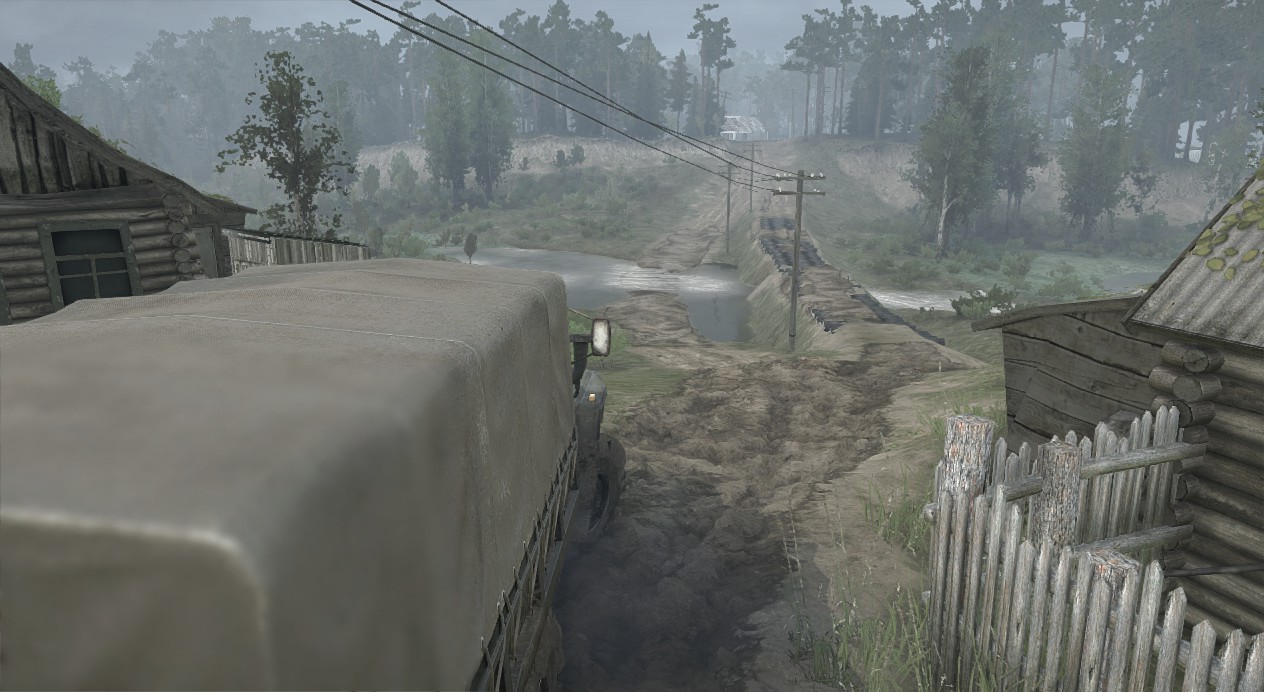 Crafted over five months by Shyrik Priyomko. A phenomenal achievement. This map is an absolute blast to discover and explore. A small village is surrounded by an incredibly well-implemented system of dams, dykes and watercourses. Rickety bridges span fast flowing rivers. There are steep hillside tracks to climb and conquer. This is professional level design and would not look out of place in the retail AAA game sphere. 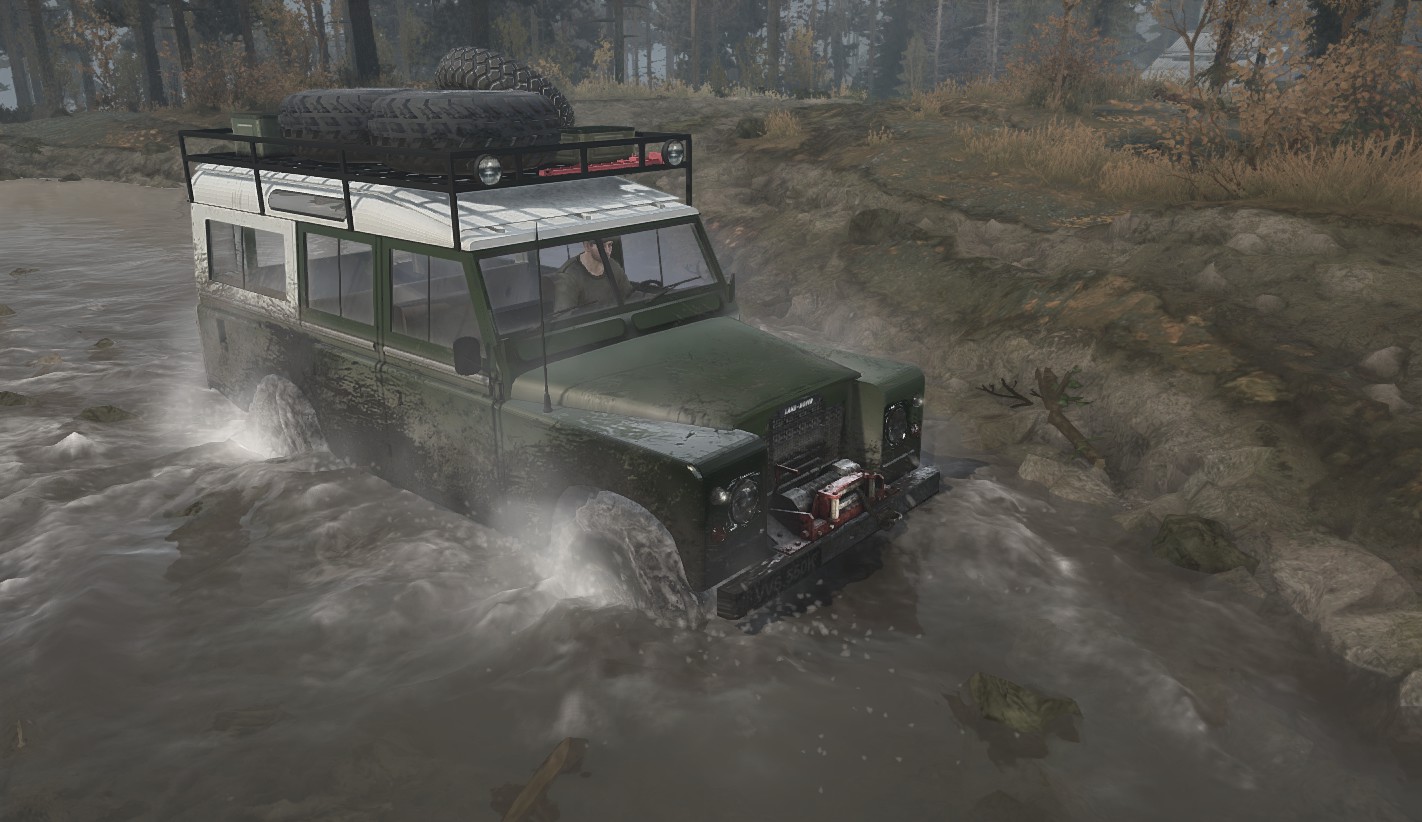 Exquisitely modelled by Zidon, this superb collection of authentic looking Land Rovers. We have a great selection of bodywork colours and cool texture work gives these vehicles a trail-run look. A handful of garage options let you customize the look and tailor their support abilities to fit your needs. 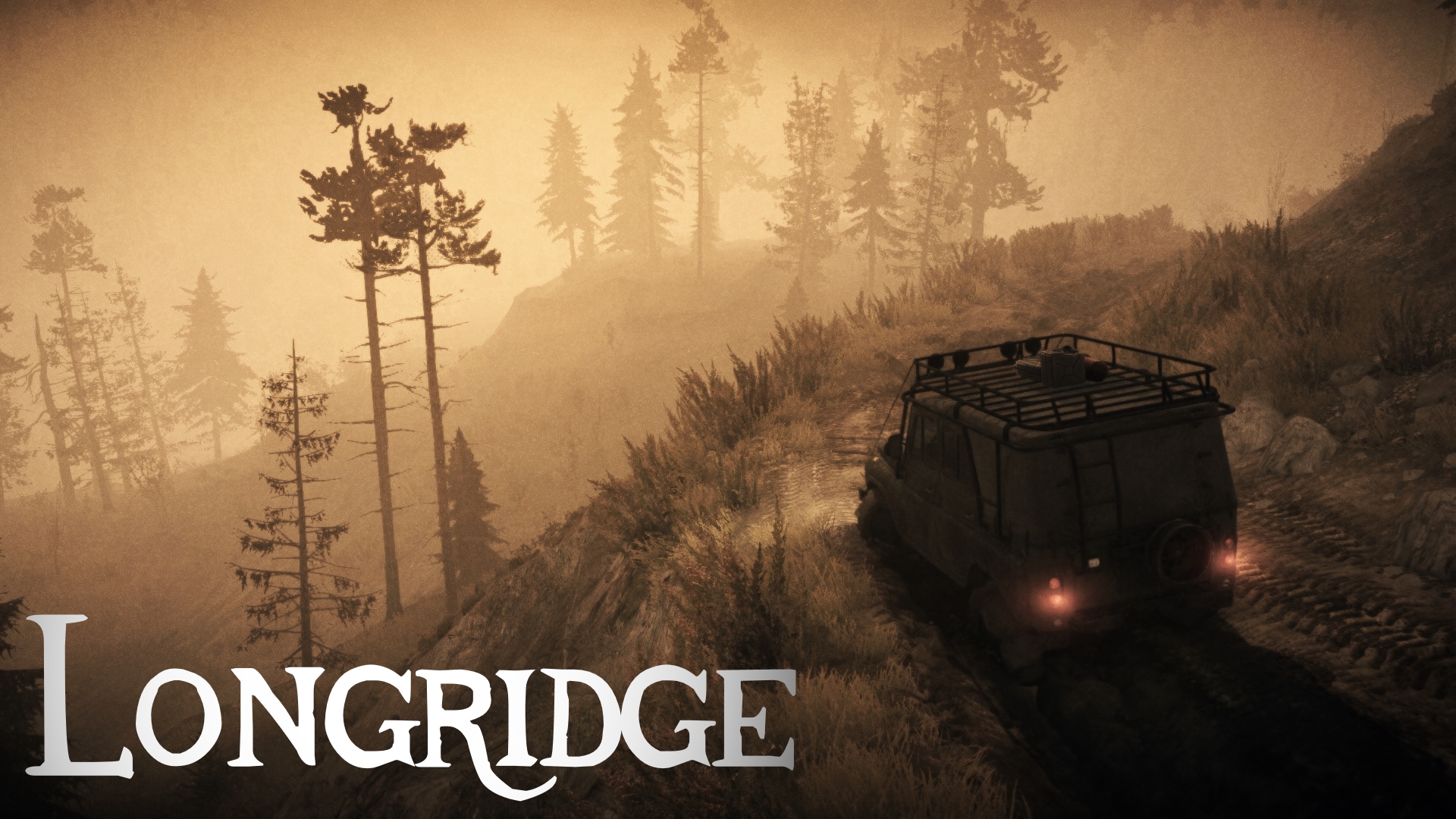 Longridge is a challenging logging map set within a large mountain range. Many fast flowing streams carve their way through the landscape, cutting canyons through the hills before eventually joining together to form two large rivers that divide the map. Longridge is all about the scenic views, mountain roads and steep terrain. 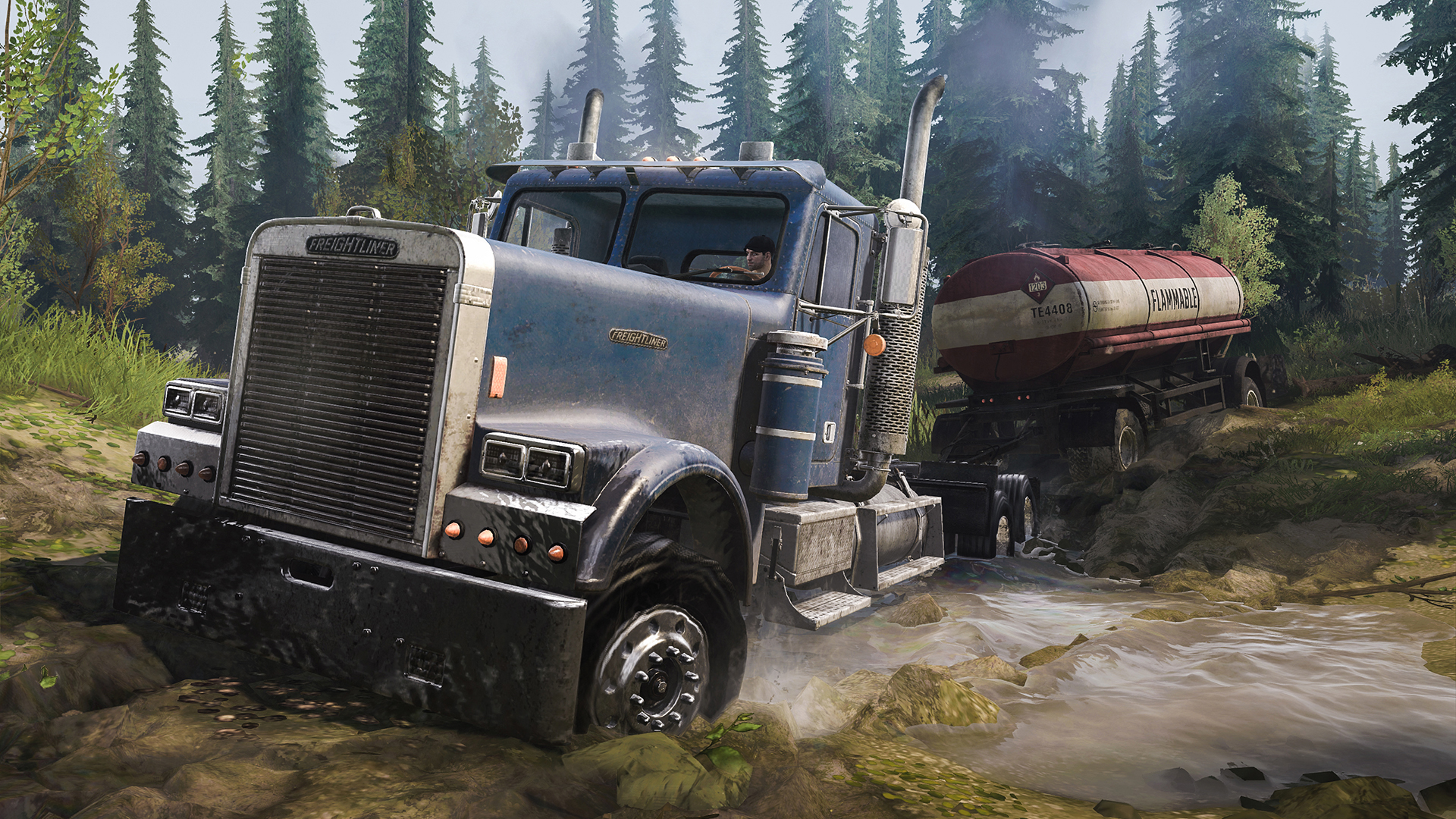 American Wilds is definitely preaching to the converted. Whether it can draw new folks into the muck and majesty of its open world is open to debate. Sabre has certainly pulled out all the stops by freshening up the look of the game. Adding well-known truck brands will obviously peak the interest of the curious petrol heads looking for something different from the usual racer or haulage simulators. I hope this DLC succeeds and widens the audience of the series. There’s a lot to dig into. So do yourself a favour and go hog wild into the mud.