Spintires: MudRunner is the ultimate version of the million-seller indie hit Spintires. Like Spintires before it, Spintires: MudRunner puts players in the driver seat and dares them to take charge of incredible all-terrain vehicles, venturing across extreme landscapes with only a map and compass as guides

Complete your objectives and deliveries by enduring perilous conditions across wild, untamed landscapes in extreme conditions with dynamic day-night cycles. Explore an immersive sandbox environment, enhanced by improved graphics. Overcome muddy terrain, raging rivers and other obstacles that all realistically react to the weight and movement of your vehicle powered by the game’s advanced physics engine.

Spintires has had a much troubled and storied history which I won’t dwell on too much. Suffice to say the community surrounding the game is hardcore and pretty volatile. This new update/reboot now has a different publisher but retains the original developer. So a fresh start for one of the most compelling and original games to come to Steam over the past 3 years.

There are six maps included in the base game and more to come if mod support is updated in a future patch. These have been reworked from the previous game and retitled. I’m no Spintires veteran so I can’t comment on any of the changes. On starting the game you only have access to the first single player map. Once you have completed a map, you gain a progress point which unlocks the next sandbox. Before you start blazing a trail through the forests of eastern Europe you can choose up to three initial vehicles. Each map has a balance rating denoted by stars. Each vehicle has a star or balance rating governed by its power. For example, the nippy UAZ “jeep” is only one star, whereas the 26 tonne E-7310 behemoth is four stars. 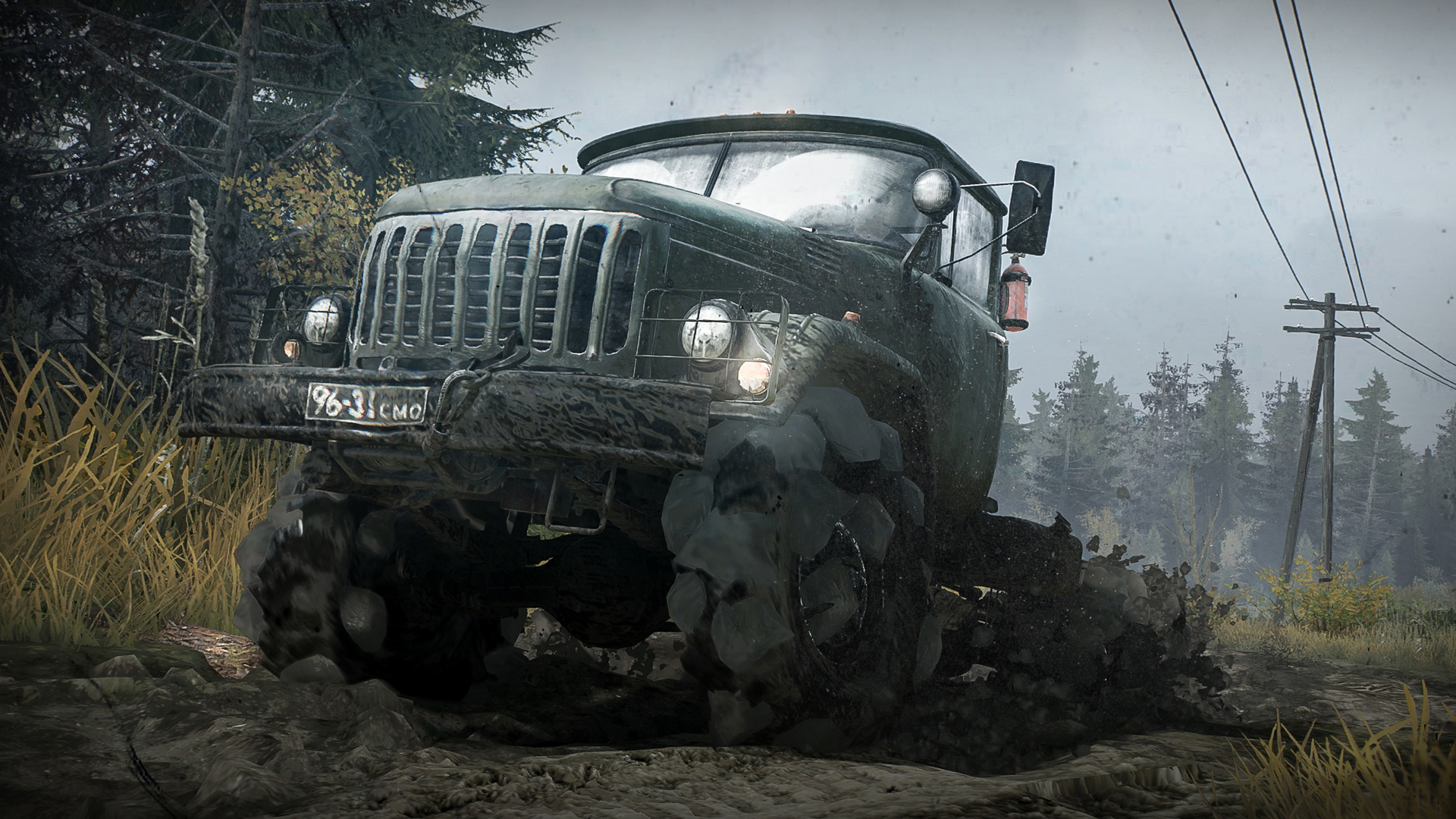 A new addition to Mud Runner’s previous outing is the inclusion of nine challenge maps. These task the player with a number of objectives from a tricky hill climb to a nighttime trailer rescue. An additional three stars can be earned by completing scenarios with further restraints. Challenge One is a perfect example of the limitations of the game as a full on truck simulation. To gain one of the stars you have to use cabin/interior view. This is almost like driving with blinkers on. You have no functioning wing mirrors or even a periscope rear view mirror.The end challenge is to reverse the tractor and trailer into a muddy yard. This is nigh on impossible in the interior view as you have no idea as to the orientation of the trailer in regards to the surrounding environment and your vehicle. To have this as an opener to the challenge mode is ridiculous and shows no regard for any kind of learning curve.

A far better opener to the game is to try the first single player map. This is entitled “the bog” and for good reason. Your goal is to deliver 8 points of lumber to the sawmill. Most of the map has been charted, except for the northeast section which has four watchpoints. By navigating to these points the black fog is removed revealing the local topology.

This is where the game began to shine for me. Free from my initial frustrations with the challenge mode, with its set structure and hard locked rewards. The simple task of collecting logs from two points on the map by any means allows the player to make their own choices and decisions. The positives from this are multiple. Slowly but surely you gain experience of not only the available vehicles but the environment itself. Knowing a truck’s limitations and reading the terrain, go hand in hand. 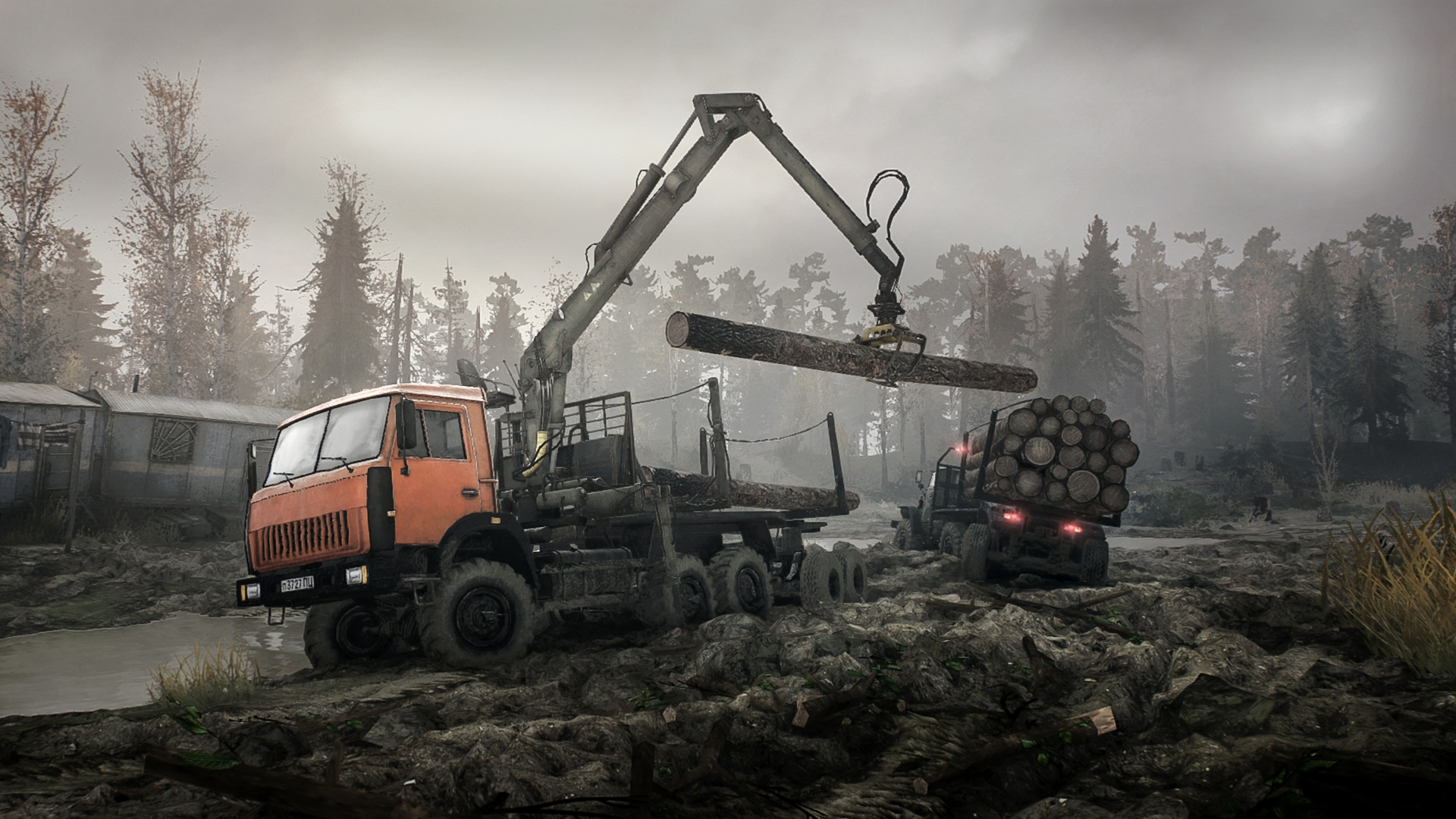 You really need to play this game with analog controls, especially when positioning trailers. Keyboard controls just doesn’t cut the mustard when fine adjustments are essential. A case in point is lining up wheels on your tracker unit when reversing into bays or picking up trailers. This requires finesse, therefore digital controls are virtually useless in this scenario.

Once I had switched over to my trusty battered Xbox 360 pad, things took a marked step upwards. I felt in control as I feathered the throttle and made slight adjustments to the steering wheel. To give yourself time to get familiar with all the controls, I’d definitely suggest new players check out the proving grounds test map. This is a small area for spawning all the vehicles and testing mods. A quick 30 minutes in your chosen diesel truck will do wonders for your confidence and coordination.

After a couple of hours, the gameplay becomes a ballet of continual controller tweaks, drive mode and camera flips. Skipping from tight cockpit view to exterior camera and then back again. Night time doubles downs on this. The headlights blow out the distance view to concentrate your focus on the near-field obstructions. I felt compelled to turn them off to get a better view of distance hazards, I could almost feel my retina dilate to adjust to the varying light intensities. After a while, this dance with the controls becomes second nature.

There are 19 vehicles included in the game, many more can be downloaded from the Steam workshop. During my playtest, I’ve attached a liking for two key vehicles. These are as follows:- 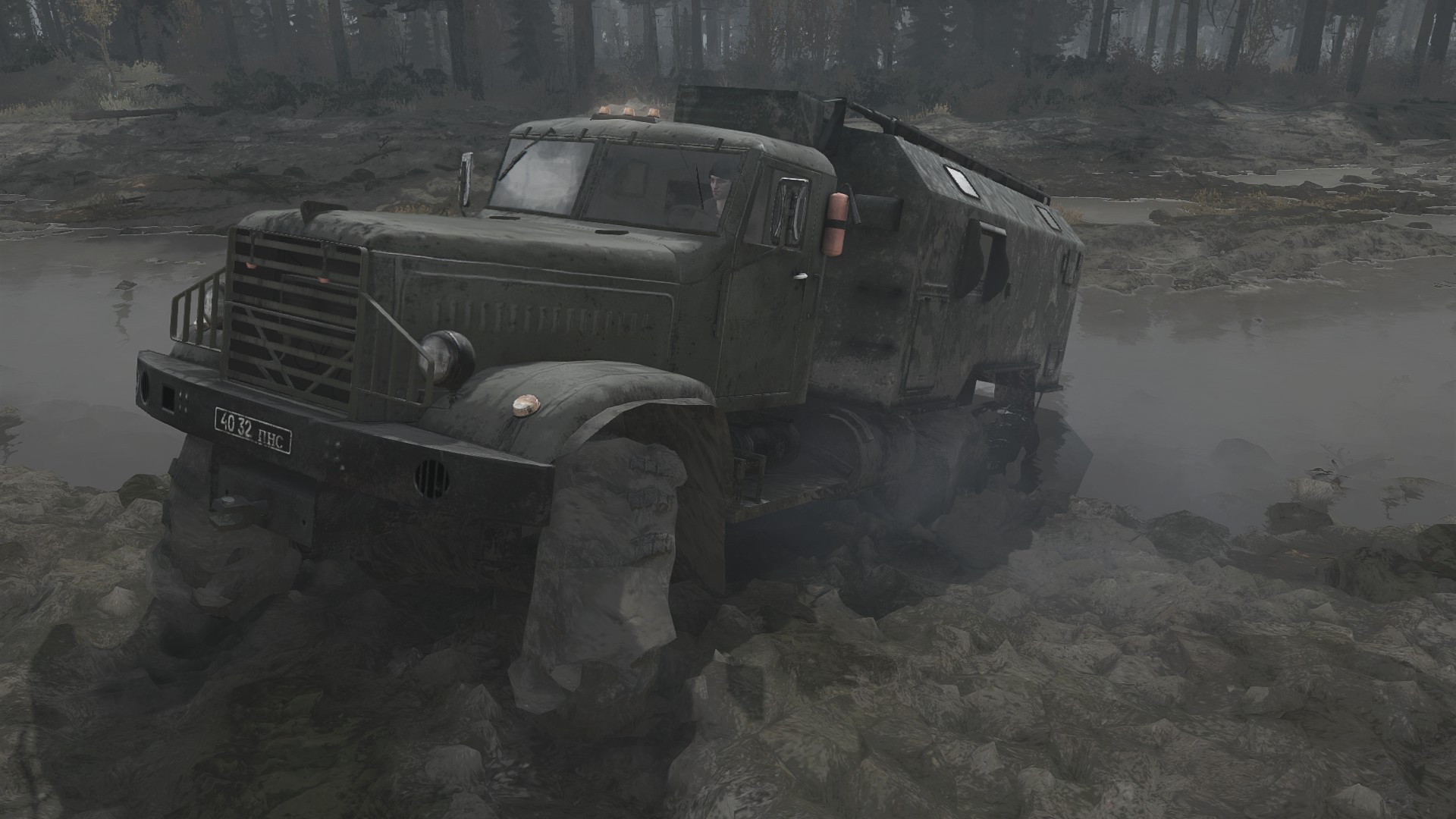 Based on the KRAZ 255, a Ukrainian built beast manufactured from the late 1960’s up to the 1990’s, the C-255 became my go-to utility vehicle/workhorse. Solid and dependable, it has six wheels for good traction on most terrains and can be fitted with all the major attachments, logging, repair, fuel, and garage trailers. It can also be fitted with a spare tire which gives it some vital repair points if you ding into a tree or hit a rock at speed. 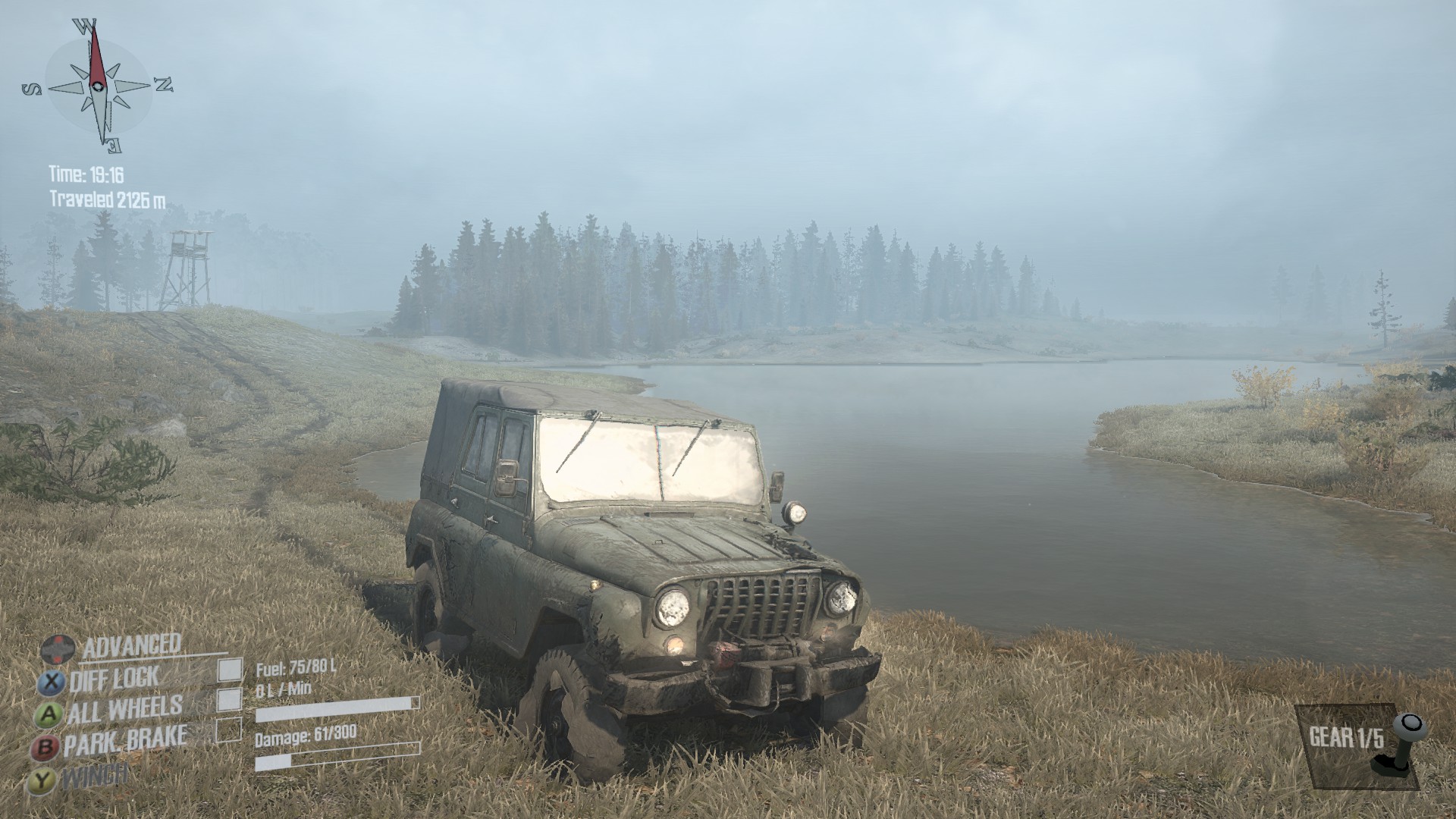 Based on the Russian UAZ-469. This was used by Soviet and other Warsaw Pact armed forces, as well as paramilitary units in the Eastern Bloc countries during the cold war. Due to its versatility and low running costs, it’s still in production today. A superb recon vehicle. Small and nippy. It can navigate hills and dense birch tree coppices with ease. Great for unlocking black flag watchpoints. A top tip is to equip it with a spare tire and truck (roof rack) this gives you additional fuel and repair points. A further bonus is the fact that you can recall it back to the garage or next to your current vehicle location at any time. As far as I know, this is the only vehicle that has this feature.

Once you have selected your chosen fleet of trucks you are warped into the game space outside of your home garage. Here you can equip your vehicles with all manner of add-ons and trailers. Along with the obvious Lumber carrying options, there are a number of support items that can be fitted including fuel tankers, utility, and garage options. The fuel option is self-explanatory. Utility add-ons act as a mobile repair shop. Garage trailers contain points that allow you to unlock other garages spread around the map. 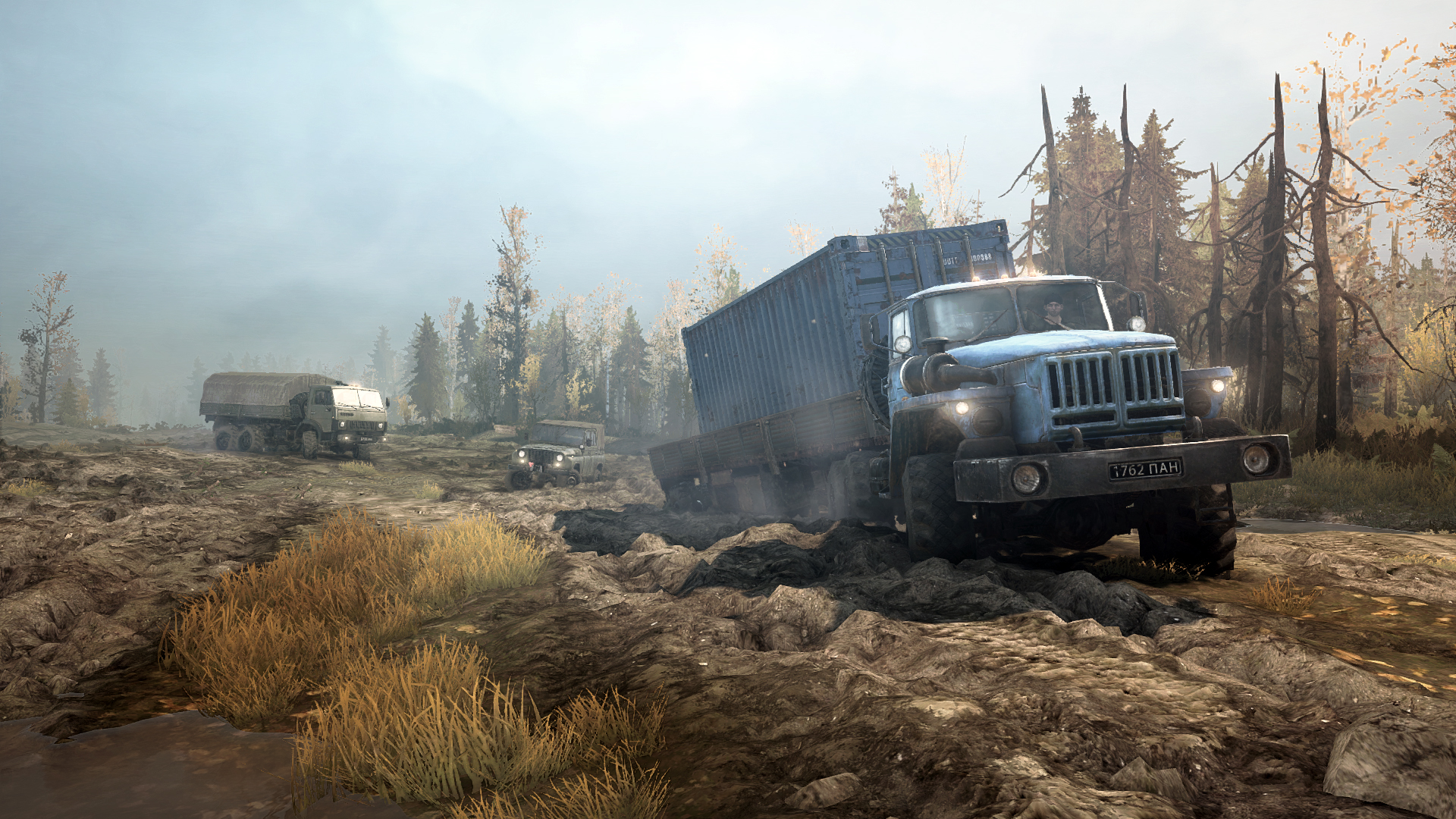 Before you set off blundering into the undergrowth, it pays to take a few minutes to study the map and plan your strategy. Using a recon vehicle to unlock black flags is a good starting point. These cover the map with a circular black “fog of war” noting where fuel, garage, and logging camps are situated and creating suitable routes.  I found this to be good forward thinking as you don’t want to have a scenario where a fully loaded logging truck runs out of juice halfway to a lumber mill.

A word has to be said about the map. It’s hardly ordnance survey level quality, merely a low poly 3D representation of the overall terrain. Straight roads are the only cast iron visual clue that they are navigable tarmac highways. Meandering and smaller paths could be anything from dried up water courses to huge rutted mud hellscapes. Only by first-hand recon can you unveil the real landscape.

Prepped, vehicle selected and basic strategy sorted. Right, it’s time to off-road. Let’s take a tour of the hud. Top left is your compass. This will also show the distance to the next node of your pre-planned route if you have created on in map mode. Directly below you have the time of day and a milometer. Bottom left shows differential lock, all-wheel drive, and winch modes. The next row is the fuel gauge, fuel usage per minute and damage counter. Bottom right shows the currently selected gear.

It would be remiss of me not to the highlight the main strength of Mud Runners, which of course is the Mud technology. In conjunction with the havoc physics engine, this is an incredible piece of programming by the game’s lead developer Pavel Zagrebelnyj. The deformable landscape is a sight to behold. Watching your fully laden lumber truck toil through the thick viscous ooze is an awesome sight. Clean tires become caked in this sticky omnipresent muck. Pristine bog lands and prairies soon become ploughed and rutted hellscapes as your vehicle’s paths leave trails that liken to some kind of massive buffalo migration route.

Everything in the game has a realistic heft and weight to it. Attach a winch to a fir tree, watch it flex, then hear it moan and creak convincingly as you reel your truck out of a tight spot. Not only is the Mud top tier, but the water physics are some of the best I’ve experienced in an open world title. Edging up to a fast flowing river for the first is an awesome and humbling sight. With clever use of parallax shaders, the graphics engine instantly conveys to the player variable speed currents. Traversing these water hazards results in a foaming, bubbling maelstrom that surrounds your vehicle, trying to envelop it. It is almost like a one to one fight with Poseidon himself. Truly immersive technology. 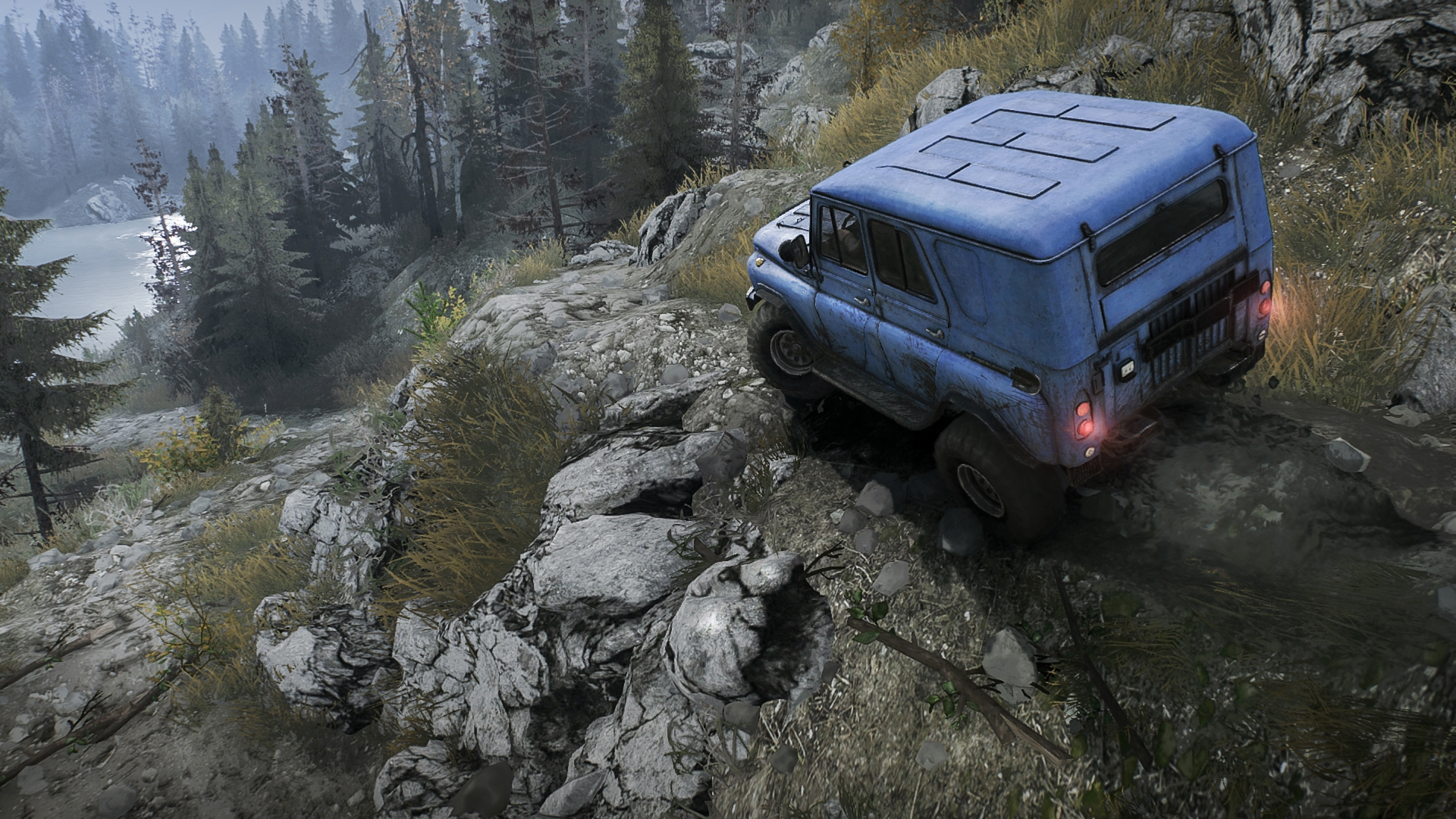 Why do developers use god awful third rate rawk music as soundtracks for games that have cars, trucks or bikes as their subject matter? Mudrunner is no different and almost instantly had me reaching for the mute button option. Once disabled, the difference was palpable. It allowed the game to breathe and be its own thing. The yin-yang between the superbly crafted environmental sounds and the dense guttural engines effects resulted in a truly unique sonic scape. For the first time in ages, I dusted down my turtle beach headphones, which have an EQ bias for low frequencies, so I could fully absorb and appreciate the roar and growl of ungoverned mechanisms.

Mudrunner is a unique game. It’s part lumber truck simulator, part physics sandbox and part environmental puzzler. It’s a slow burn title. In a niche of its own. Its obtuse control systems and the unwieldy camera will put off inpatient gamers looking for quick cheap thrills, but sticking with it and mastering all its shortcomings reaps huge rewards. The beauty and majesty of nature unhinged have been imperiously translated into a virtual playground of muck, river, coppice, bog, and forest. The suite of bestial diesel machines is a positive candy store from any gamers childhood toybox fantasy. The dark primal power of these carbon footprint munching trucks is both gripping and intoxicating.