Virtual Reality first person shooters are gaining a lot of ground, so lets see if we have a new contender for top gun.

Zero Killed is a VR title looking to compete with several other FPS VR shooters, many of which have begun to hone in on the VR FPS gun-play and game-play sweet spots. Can this new contender compete with games like Pavlov and onward?

Naturally, I’m skeptical of shooters by default, but I have been pleasantly surprised by a good many games of late, so lets dive right into it…

Virtual Reality gaming is a difficult medium to program for, and I understand that developers what feedback from their players to craft a better product, However, it feels like the majority of developers are using it as an alternative to creativity…

Too many games are getting produced to a barely playable state and then “sold” for a discount, forcing the player base to play what is essentially a foundation to a game, devoid of what gives it personality, letting the feedback they collect craft the future development. Polish is not something you should expect from an early access game, however, I think it is fair that it performs well enough that the bugs and technical annoyances are not going to get in the way of the goal; To have a good time. I also think a game should have a soul, or at least a solid development plan that includes what makes it original and fun, before asking players to essentially develop the fun for them.

During the review process for this title my editor reached out to the developer and offered them a chance to rebut/respond to my work in progress review. This is great as it offer an opportunity to our team to see if there is a chance that it is a particular build or hardware issue that is affecting the review process. They did reply and it turned out several of my complaints were due to be resolved in the next build or subsequent build thereafter.

As you read, anything in italic will determine that section was in the original review, prior to my replay.
I am leaving the comments made prior because lets be honest, if your expected to be part of the development process and put through the pain of beta testing, you will likely experience many of the same frustrations which I feel should also influence your buying decisions.

Many bugs and crashes for Zero Killed have been addressed, at least the extremely frustrating and game breaking ones.

While it may still be difficult to find people to play with as the servers are all but empty, it at least does not crash to desktop or lock up like it used to. It still does show as continuing to operate and make steam VR unusable for other games and requires a reboot.

Ignibit is working on AI bots to fight and if they’re programmer well enough it might be worth revisiting later when that happens, but for the time being they offer a calendar of “good times to join”

Click here for the Google schedule provided by the Developer

OLD REVIEW INFO:
Well, let’s start with what is likely going to be a coffin nail for most players right off the bat, Upon activation and installation of Zero Killed the first thing I noticed was that logging into the game crashed to desktop with Steam VR beta. I removed the beta and reconfigured for the stable build, ran through calibration and room setup, relaunched the game and logged in. I was greeted with surprisingly well made graphics, for a menu area. Selections for options are sparse, but it is still in Beta, so I’ll cut them some slack.

I clicked on the option to disable EU servers and the game proceeded to lock up. Steam crashes in a way that closing Steam VR and reopening it would normally reset for other titles, so it manages to not fix anything. Steam VR says the game is still “shutting down” and I am forced to fully reboot the whole system. After a system scan, new graphics drivers installed (post driver cleaning), and going through the game files as they are checked for integrity violations, it all comes back clean. My other games are fine and no issues with Steam.

I log back in, manage to get to the online game screen, and a few players load, all with their computer names as their names, including mine. Map selection happens and then we teleport… into the floor of the map, stuck, the game locks up and crashes to desktop and Steam will again not load any other titles and still reports the game is closing.

A few days go by, and each day I try to load the game to test, many times throughout. a total of 25or so attempts, all of which result in the same or similar behavior. At this point I reported to the Mods of SoQ that the game was un-reviewable, and get a new title to review.

The very next day (yesterday) it is reported that the servers were locked up and no one knew and reset them. the game was updated and now has a more reliable dedicated server list, and player names are now grabbed from your steam name rather than PC. I logged in and selected new game. I was the only player on my team, none on the other.. I managed to win the match! Go figure, this might be the best FPS I have ever played, I can win! Four matches later, it is still an empty room. However, on my fifth match two players manage to get logged in, its me versus the other two players. After getting slain for their amusement too many times for my liking, I decided to take a break and log off, to find the game is still reporting “its closing” after reloading Steam VR a few hours later. Rebooting… AGAIN! 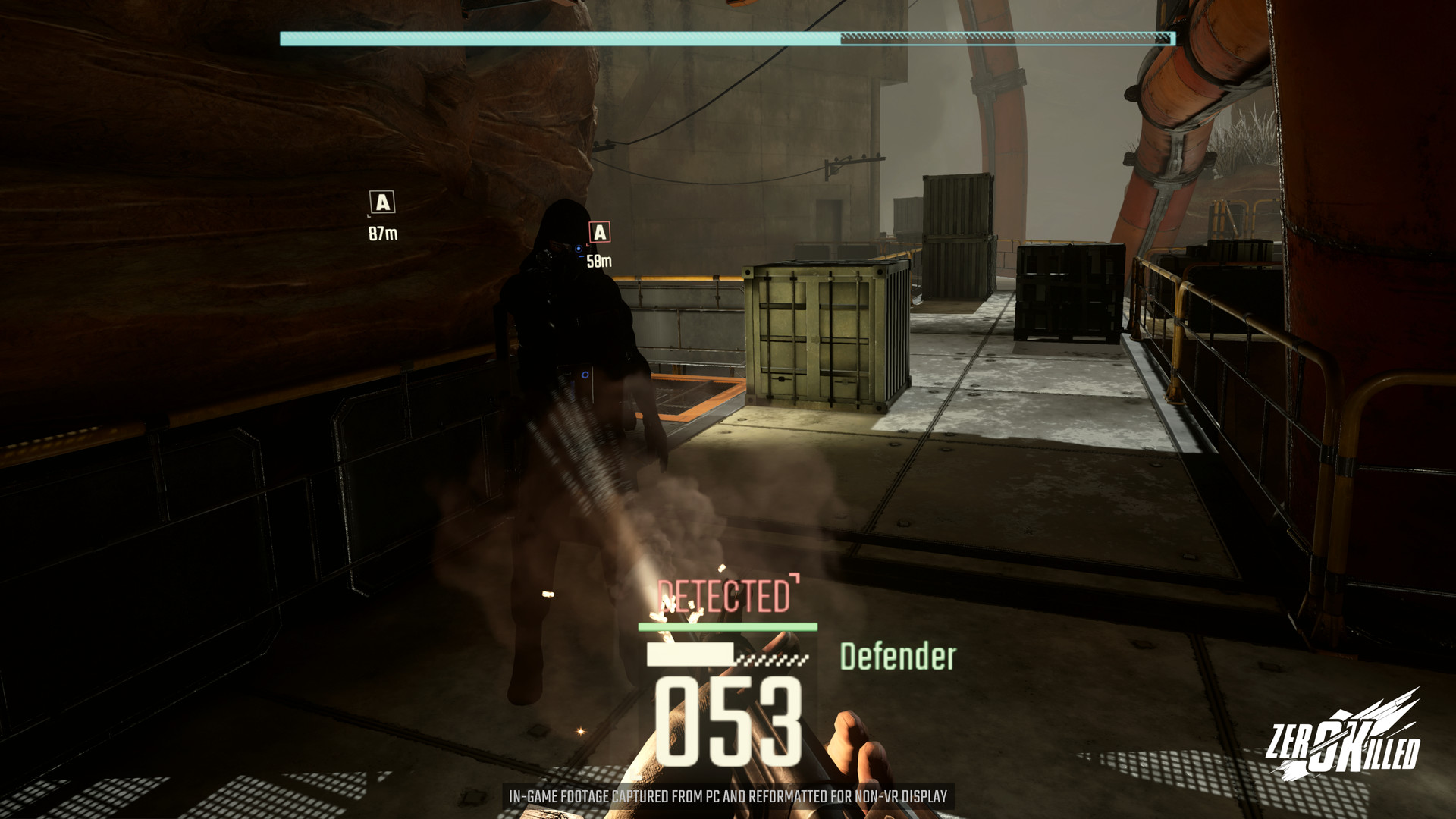 The graphics quality is currently a mixed bag as in game models for weapons and tools are great, but player models and static images are very generic and low quality. The animations are terrible, especially for the hand and player movements, they’re rigid and floaty. The outline created to denote where hand placement can be possible is akin to the model complexity and size of a job simulator in game hand.

I found that ricochet animations are well done, as are muzzle flashes and explosions, but the volumetric smoke is angled to the player along with reflections & shadows. So, rotation of your field of view makes object details pop in and out of existence in the shadows and reflections, and the pillars of smoke turn to match the angle of view.

All of the tools and weapons, UI elements, and current match statistics all float around you in some way either near your waist or just above it. Reaching for a particular item causes clipping and during battle makes selection difficult.

World textures are OK but reused a lot, and mute in the color palette, which makes for dull, boring, and forgettable locations. Objects are static and the maps are all laid out in peculiar ways. The audio is acceptable, one of the few things so unremarkable I cannot comment on its quality or lack thereof.

The Developer offered the following:

We are adding lighting scenarios for each map depending on the game mode
and this is planned for this week. So if you play Suburbs map on Data
Steal it will have other color palette and time of the day. It should
add a lot when it comes to graphical diversity. 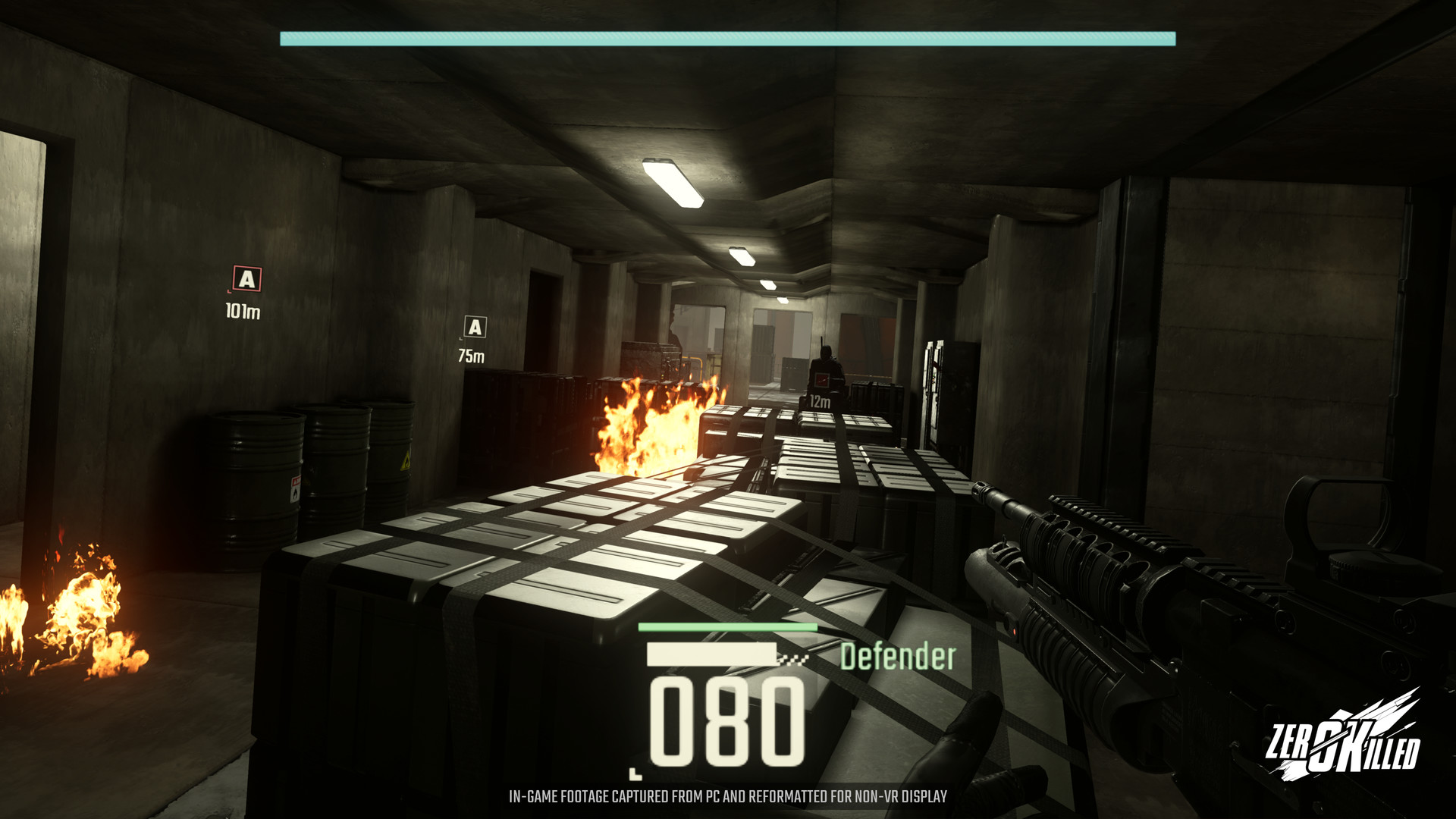 If you can manage to get into a match, and it is actually populated with enough players to get into combat… The gameplay is not terrible. Gun-play is relatively straightforward as there is no cocking or reloading sequences, which can be a positive or negative depending on your preferance for reality.

There is a fairly diverse selection of weapons and tools to choose from. Each have their advantages and downfalls.

The rifle and other scoped guns can be rather difficult to use if you do not know that if you grab an item by holding it, then you have to hold it, but if you click grab button then it will be held until grab button is clicked again. This was a huge point of contention for me prior to learning this as I was holding the side triggers all the time to hold weapons.

Movement only has a singular option, placing a thumb on the directional pad moves you in the direction of your thumb and tilting the left wand in a direction will have you run in that direction. The option to move with your head rather than wand direction in in the works.

Climbing ladders requires you to put away your weapon and manually climb the ladder one rung at a time, meaning that letting go will force you to drop to the ground, making dismounting a ladder a little awkward and difficult. During myy review, ladder climbing was patched to lower the collision box for easier climbing, but it is still not an intuitive process and will likely result in your finding an alternative route with stairs.

There are NOW three modes of play as of this writing:

There are currently 3 game modes available on 3 maps: Data Steal
Nuclear, Domination Nuclear, Tournament Nuclear, Data Steal Suburbs,
Domination Suburbs and Data Steal Sewers. We are increasing available
game modes with each patch. Btw you don’t have to stay in the circle to
accumulate points. We are adding contextual goals to HUD so players know
what game modes are all about.

OLD REVIEW INFO:
At the time I played the only option to play was “base or position holding” where points A, B, & C are visible on the map and if you are within the circle you accumulate points until you win. If you play 2 vs 1, the other team can get to the point goal twice as fast and it is difficult to defend or secure more than a single point against multiple enemies. 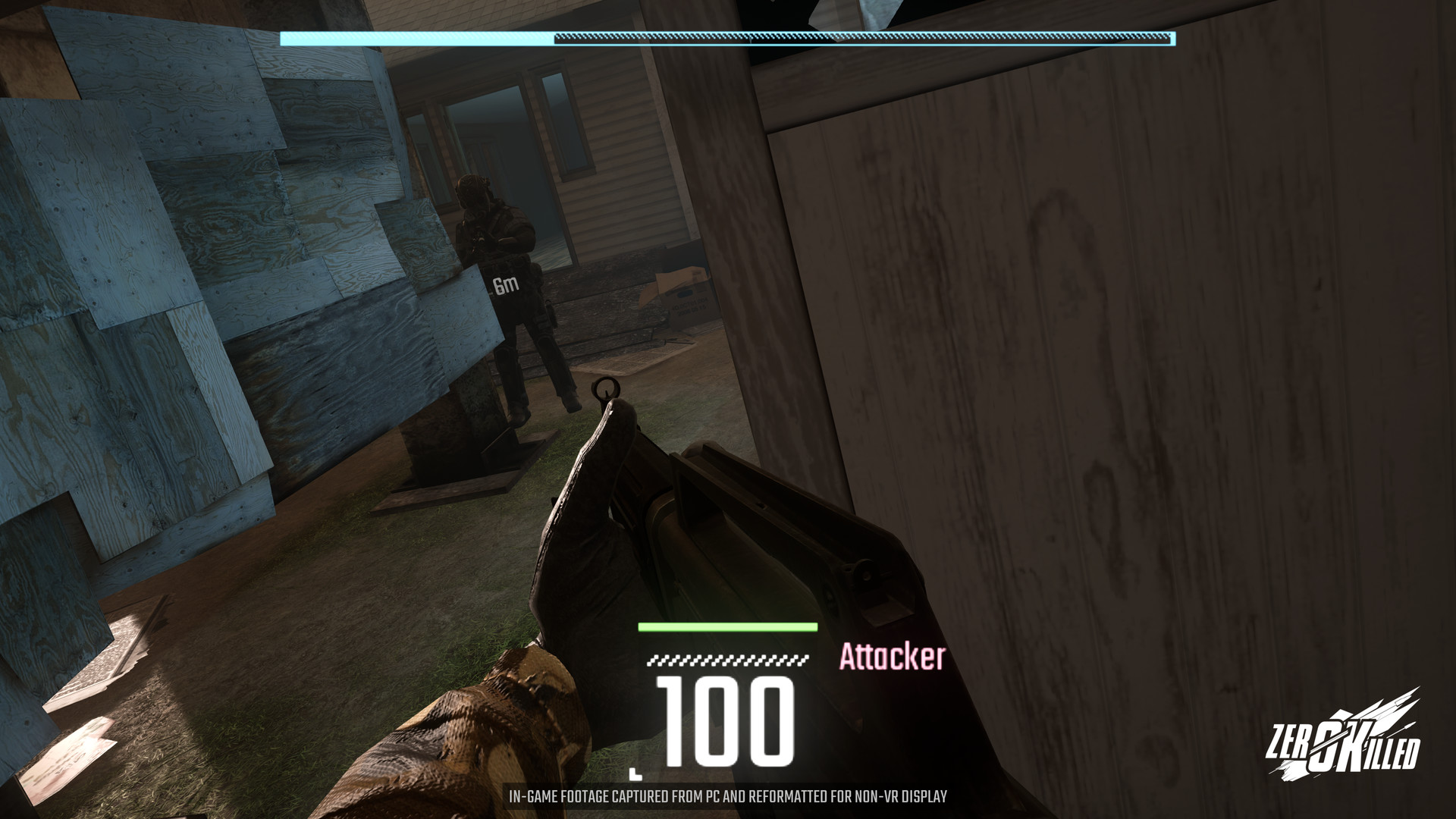 Zero Killed in its current developmental stage should be considered in late Alpha, or early Beta, if you like being part of the development process then it can be enjoyed.

Ignabit seems devoted and passionate, which is a great thing, and influenced my review considerably. I can see a lot of potential in a lot of different areas, and with the right amount of time and effort it is likely they will find a niche and polish the game to target that group, but right now it lacks cohesiveness and feels disjointed and unfocused.

Give this title more time to mature before you pick it up, or you can help pay for development and…