Shortest Trip to Earth is a valiant effort to improve upon a great game, but at the moment it falls a bit flat. One to watch, but it’s not quite there yet.

Shortest Trip to Earth is the latest in the not-quite-genre that I like to call “FTL-like games”, which if you’ve played the excellent FTL, should be fairly self explanatory. This one is from new development studio, Interactive Fate, and published by Iceberg Interactive, and it’s only recently entered Early Access on Steam.

The game puts you in control of the crew of a small spaceship that suffered a warp drive malfunction and ended up in deep space, far from Earth. Your task is to get these poor souls back to Earth, by traveling through a series of 10 sectors of space — only five of which have currently been implemented, with two or three more due during Early Access and the rest after that — each joined to the next by a powerful warp gate.

Graphics are interesting, with nice-looking starscapes in ship view backgrounds and colourful, though sometimes confusing to comprehend, ship interiors. Crew are displayed from the top-down in the ship view and mostly look like different coloured replicas of each other within each race, though the different races look dissimilar enough to at least recognise them. Intruders can be hard to see. Solar system map graphics look a bit strange, mostly in monochrome and appearing rather pixelated and plain at times, but they work well enough. 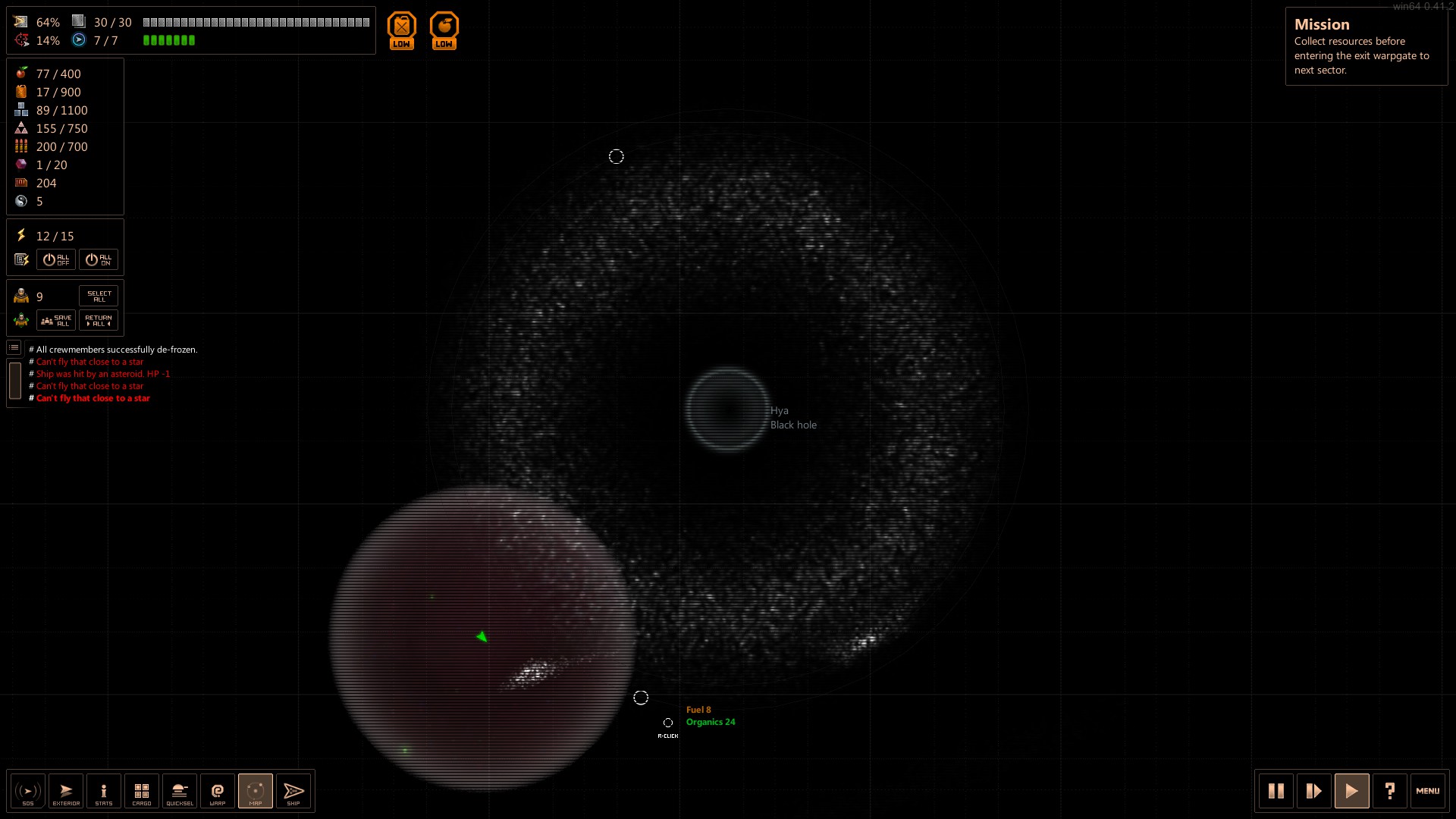 The user interface is a bit of a mess overall and definitely adds to the difficulty curve to get into the game. Tooltips only work sometimes, the help and tutorial are lacking in key information, and the crew refusing to do what you tell them on occasion leaves you wondering whether you’ve misunderstood the interface further. It’s all a bit overwhelming to begin with, at least.

The music is great: a sort of ambient space sound track that also reminds me of FTL, as well as many other space exploration games. Many of the sound effects, too, could probably have been lifted from that game without sounding too different to what’s here, but they’re pretty solid and do the job well, the physics of sounds traveling in the near-vacuum of space notwithstanding.

There are a few graphics options, but the game worked without any noticeable stuttering or performance with everything turned on on my GTX1070-based gaming laptop. 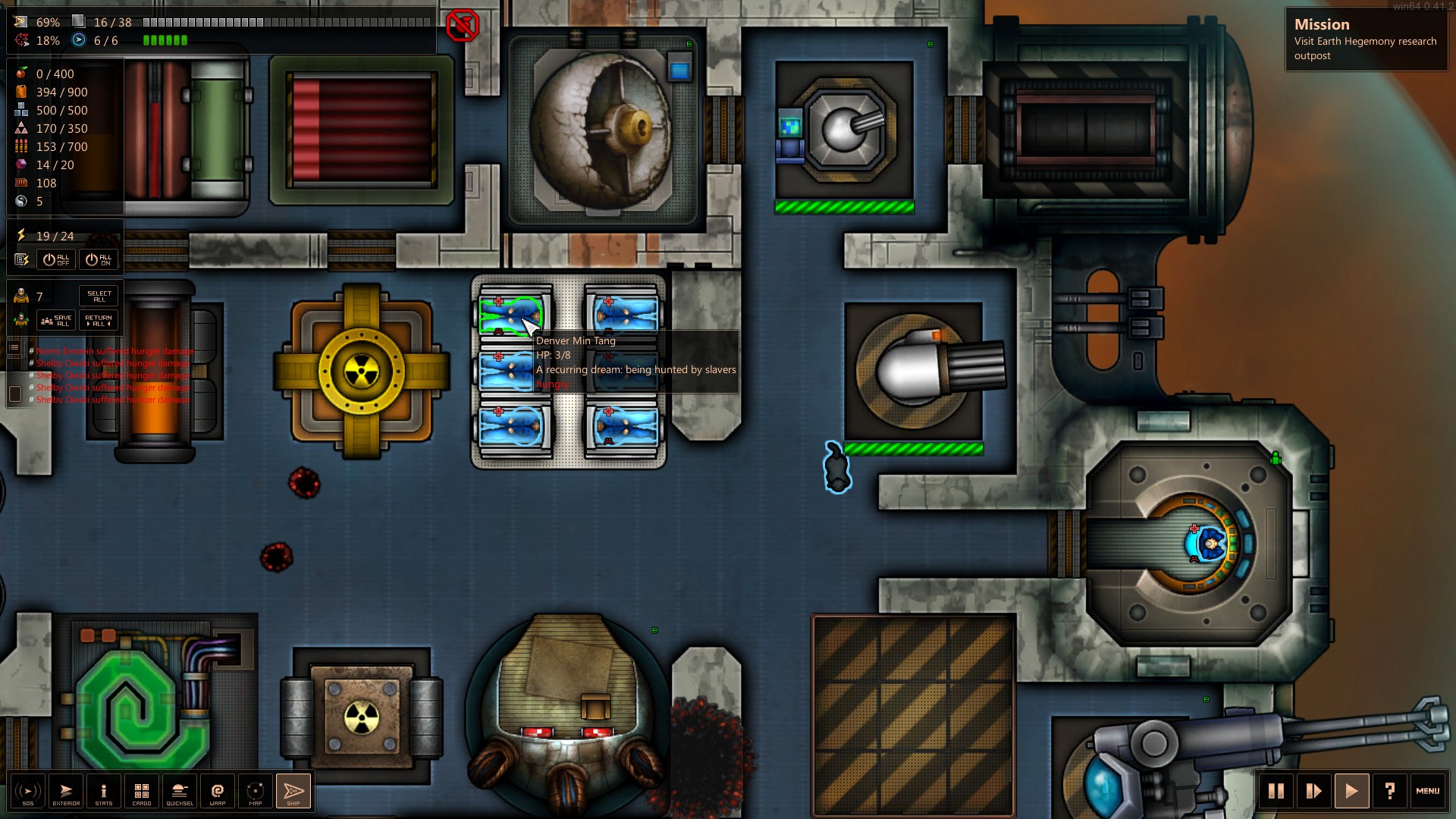 Shortest Trip to Earth plays like a slightly more real-time version of FTL, with a whole lot of confusing stuff added that makes it much harder to understand. I know, that sounds a bit harsh, so I’ll try to explain. 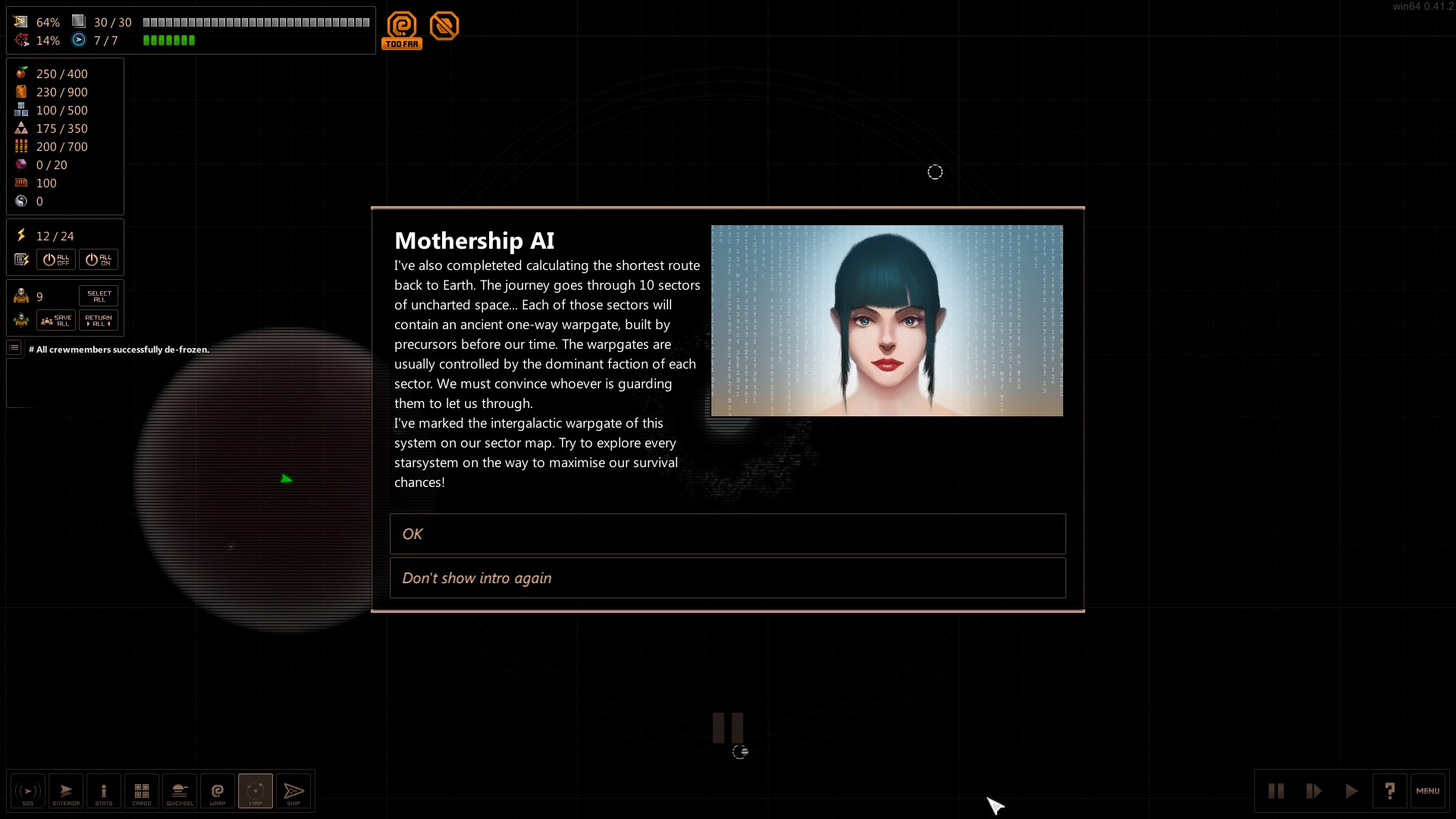 From what I’ve seen, almost anyone can pick up FTL and learn to play it in a few minutes. It’s simple, it’s easily and well explained, and mostly it does what you expect it to. When I first started up this game it seemed to be basically the opposite of all of those things. Even now after playing for a handful of hours and completing over half of the current content I still don’t understand some of it. Like what do those damage ratings mean: 4×1, 3×2? And what exactly does having a person manning each module achieve? I’m confused, and not much seems to be explained in the fairly minimal tutorial or in-game help.

Both games have rogue-like elements, such as perma-death and procedural generation, and both games include elements of what some of my colleagues might refer to as ‘rogue-lite’ elements, such as meta-progression, allowing you to gradually improve your chances between plays through Fate. Both games have real-time combat, though for some reason in this case the developers chose to only let you slow down the action, rather than pausing it entirely. And both games have a similar core gameplay loop: explore an area of space where each planet or space station is a random encounter or event, balancing consumption as best you can, and try to upgrade your ship wherever possible so that you don’t die in the next combat. In fact, in spite of the differences, Shortest Trip to Earth is probably the most FTL-like game I’ve played — apart from FTL itself, obviously. 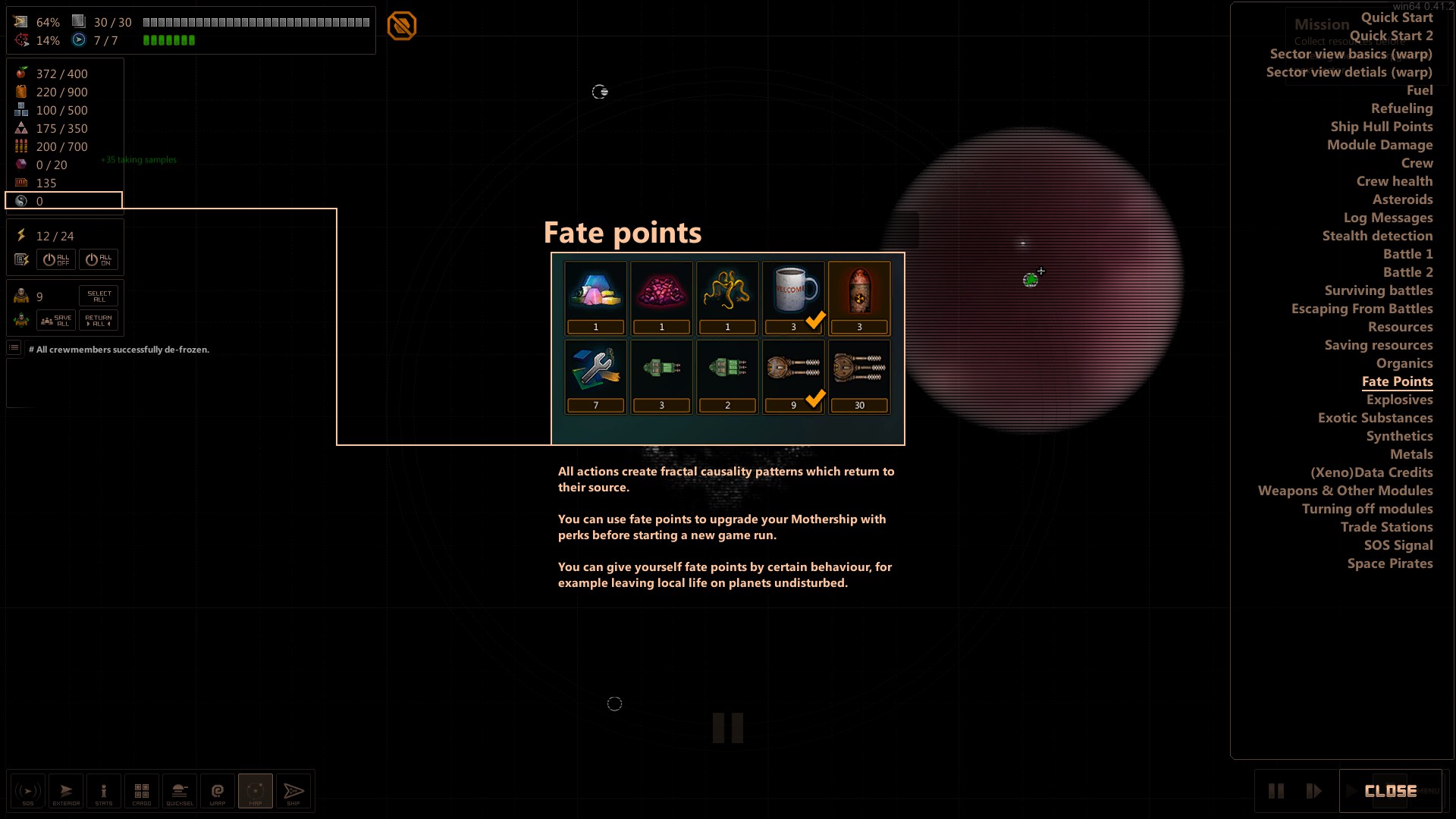 There are a number of resources, items, and values of which you must keep track, some of which are tradeable and some not, though exactly why that is I’m not sure; if I can buy damaged modules from a station why can’t I sell them my own? Like FTL, your ship has different installable and powerable modules that add functionality or firepower; as well as a hull rating (repairable) and shields (rechargeable). Unlike FTL, you also need to keep track of stocks of multiple resources that are used simply to survive: food for the crew, fuel for the ship, and metals, synthetics, and explosives for weapons, repairs, and other uses as well. But ultimately this is a game of resource attrition: ever-decreasing resources that you must try to keep topped up through exploration, combat, and luck. 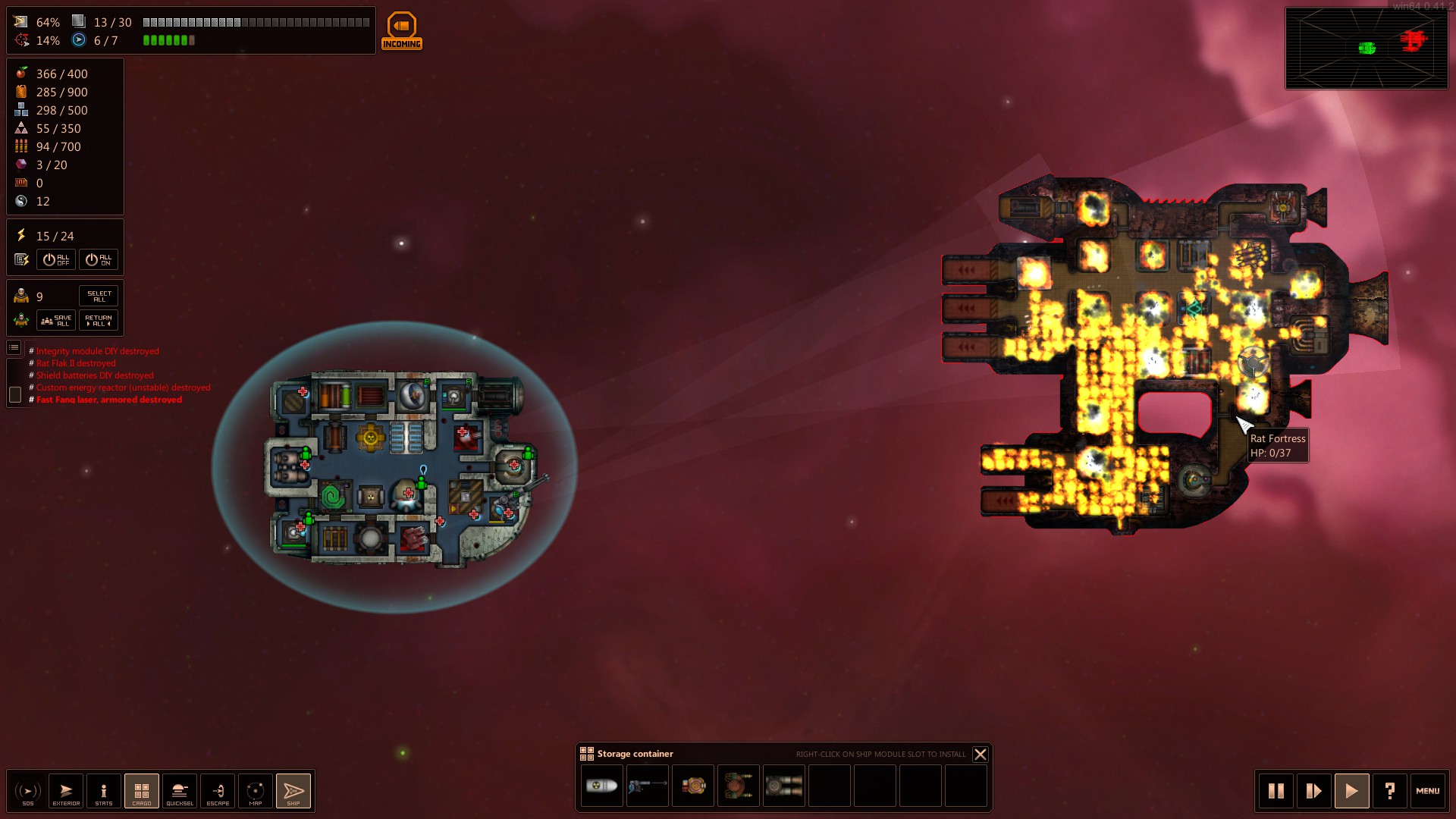 Unfortunately, though, it’s also a game of micromanagement, and most of that is not much fun. Partly it’s due to the countless bugs, which make you manually control every little detail of your crew’s actions, but even accounting for that, the resource management side of the game just seems a bit unbalanced. Exploration tends to be punished by savage RNG-based variation that can all but wipe you out from one unlucky encounter, so that often it feels like you’re better off just ignoring everything and making a bee-line for the exit gate. The small cargo sizes compared to how much of your resources you burn through just flying about further exacerbate this issue.

The game also seems a bit limited, though I hope that will improve dramatically as it moves through Early Access. For example, there are only seven ships and three of them are available right from the start. Hand-held weapons on your crew are interesting, but there seems to be no way to swap them between crew members or change their equipment. And the ship modules just seem like the same things over and over again, sometimes with ever-so-slightly different numbers or different graphics. The sense of adventure I felt when I first started up the game dissipated far too quickly, leaving confusion and frustration in its place. 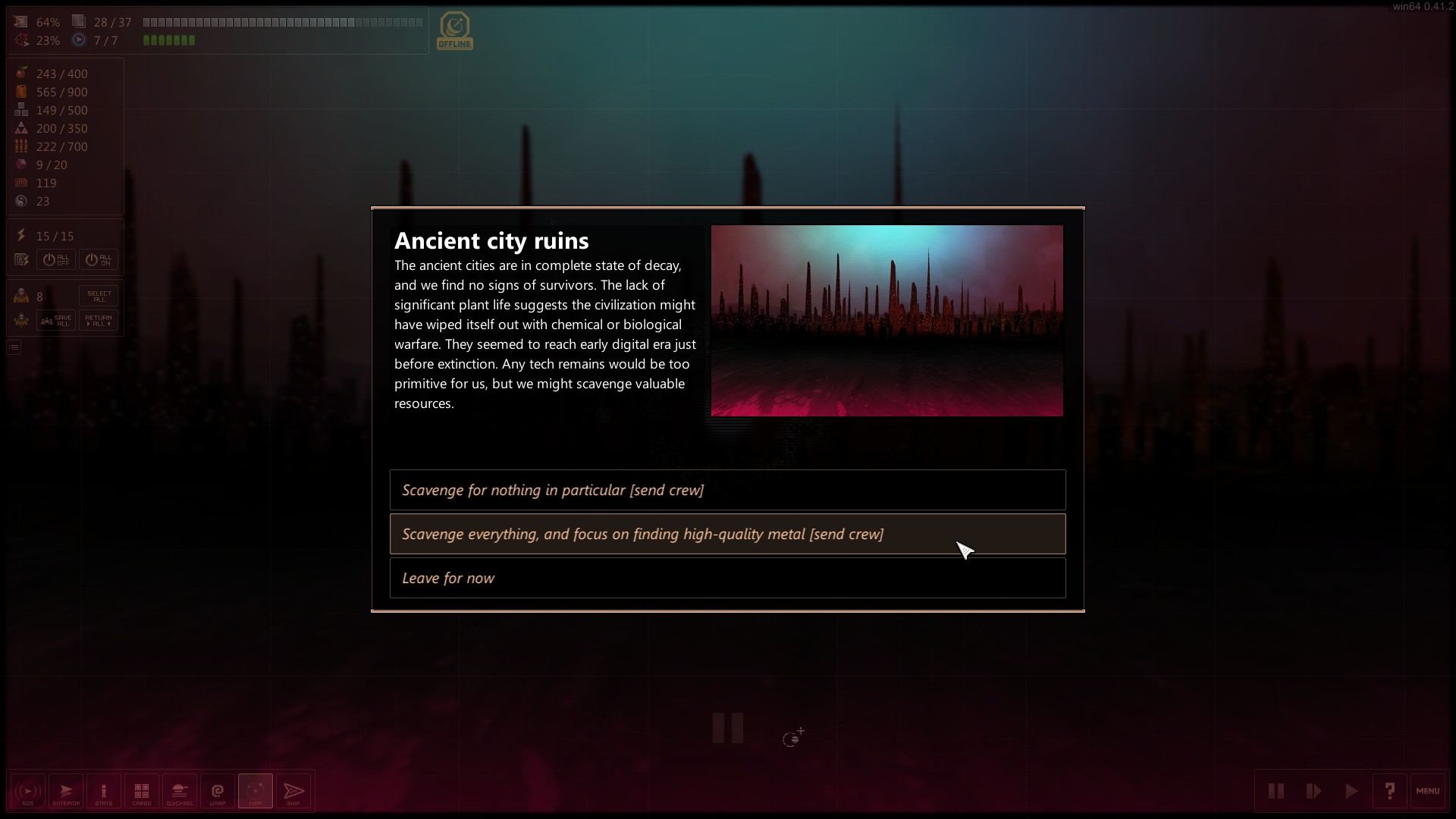 Finally, you might expect an Early Access game to have a few bugs, and this one definitely won’t disappoint on that count! From game-breakers such as endless dialog-box loops that destroy your progress, through major annoyances such as the absolutely woeful crew AI, down to minor inconveniences such as crew in cryosleep still suffering hunger damage and the biological ship not being able to move when you have no fuel, if you play Shortest Trip to Earth, you’ll encounter many, MANY bugs. There are also some pretty terrible spelling errors, but to be fair the developers do mention this in the Early Access disclaimer dialog that’s displayed when you first start the game. 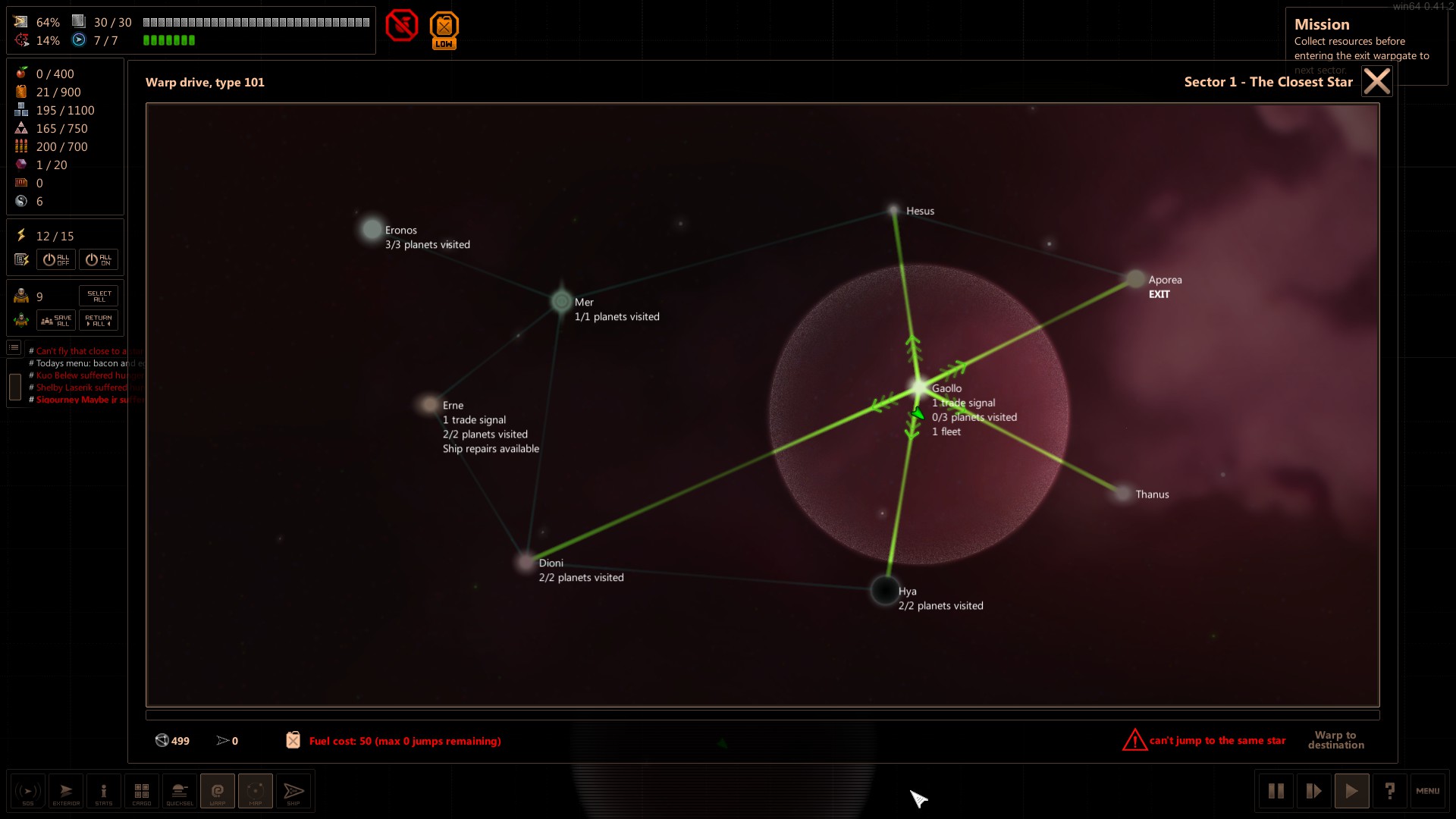 Where FTL succeeds at least in part by its simplicity and immediate accessibility, Shortest Trip to Earth seems to be trying to add too much to the formula, and ends up all but drowning the player in micromanagement, confusion, and lack of control, while somehow also seeming to provide less variation and interest. I think it won’t be a bad game after rebalancing, and once much more content has been added and the many bugs have been fixed — in particular the atrocious crew AI — but so far it’s left me feeling a little disappointed. Most telling, I suppose, is that I haven’t actually enjoyed playing it that much.

I’m hesitant to recommend it at this stage, especially given the asking price.