Can our brave young dinosaur boy fulfill his dream of becoming a soccer goalkeeper? Enlisting the help of a fairy, he wishes for bigger hands in exchange of completing challenges for the fairy.

Borti, our T-rex teen, has his species’ most famous feature, little hands that unfortunately make playing his favorite sport a bit hard. He has dreams of being a goalkeeper and the village elders hinted about a magical fairy that can make wishes come true. Borti agrees in helping this fairy by collecting crystal shards for her across multiple different themed levels in true platforming fashion in the hopes of her making his wish come true.

Overall, the look of the game is quite colorful and there isn’t anything that really looks threatening in the world Even the enemies are furry (I’m looking at you cat-alien hands in the outer dimension!) and mostly there are only innocent looking creatures roaming about even though they are still extremely deadly. Upon experiencing them firsthand I feel they are actually more deadly than they look. Sometimes I jumped right on top of the enemy and the enemy would die, but kill me along with it. Moments like this came frequently, mostly right after jumps where the enemy was on a small platform and I didn’t have a ranged weapon to shoot at it. Thankfully, in those instances where the enemy actually died it would stay dead after I spawned at the checkpoint. Things would have been worse if the enemy also spawned back to life. There are a few demonstrations of this in the gameplay video. 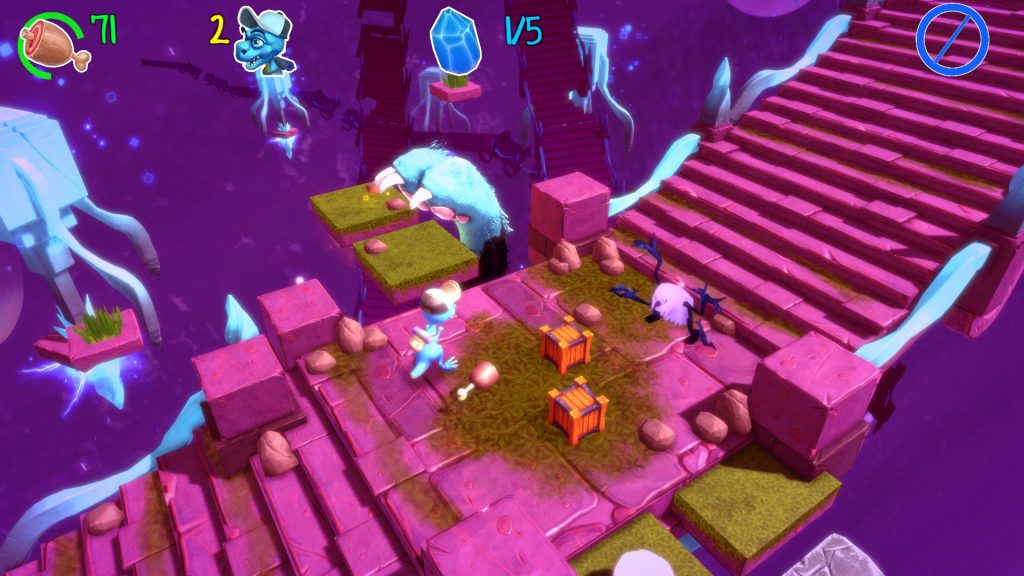 The game started interestingly, with the first two levels being great and showing a lot of promise as I played on. Of note was the lighthouse-level where I climbed and jumped up a tall lighthouse. After that, the levels were mostly just the same thing over and over again. There are a few different themed, and one positive surprise was the 2d-level, but nothing that really caught my attention or felt especially interesting. The platforming element is far and between. Most levels seemed to compromise of jogging and casually hopping over a few obstacles. There are four skills that are unlocked after beating the bosses, but they don’t do much. The drill, for example, unearths a buried treasure while mechanical arms let me hop over bigger distances at pre-determined places. They never really were utilized properly among the levels. 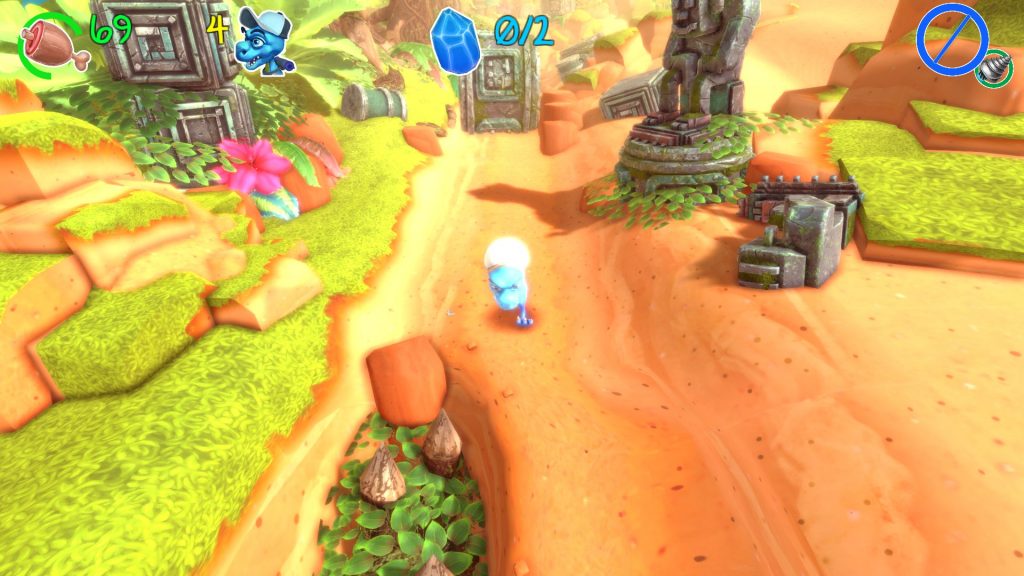 POV problems and something positive

Along with some weird hitboxes, the camera is not adjustable by the player, sometimes putting me in a bad spot. On one level I was running towards the camera and boom, there was an enemy, completely invisible to me until I ran into it. Other than enemies, the jumping was sometimes deadly because of the camera movement. I knew I should jump, but to where and how far? Usually, I found this out by trial and error and it’s an apparent problem in the last 2D level where there are a couple of big jumps. In another level, I could see the top of the diamond as I jumped to it and immediately fell into some spikes (I should have jumped in front of it, how was I supposed to know?). Then there was jump where there was a frog and the jump had to be aimed just right blindly (read: by luck) or I died there at the frog. These are just a few examples of the problems this game has with its enemy placement and camera angles. 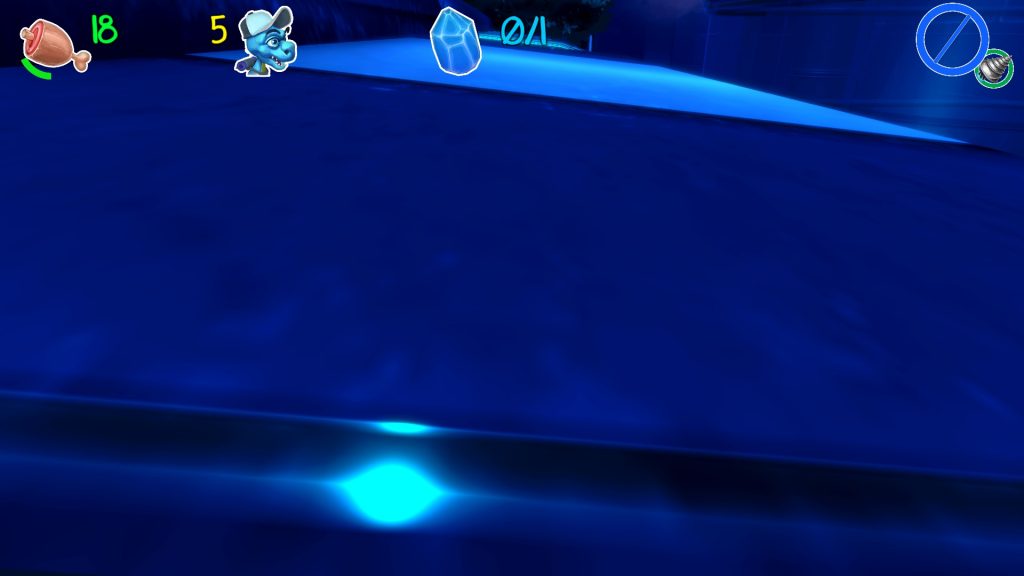 Those things are crucial to get right in a platformer and it’s a shame since otherwise, this is a decent game. I really liked the sympathetic main character and some of the levels were really nice with the lighthouse level being a highlight. There is also a chance to unlock a harder version of the level by collecting all the different colored crystals scattered across the levels, although, sadly this isn’t utilized properly either. There’s so much that could have been done with the placement of the crystals to expand the levels and make them more complicated and challenging. I’ve completed a few of the harder versions, and I wouldn’t call them hard, but definitely more interesting than their counterpart. 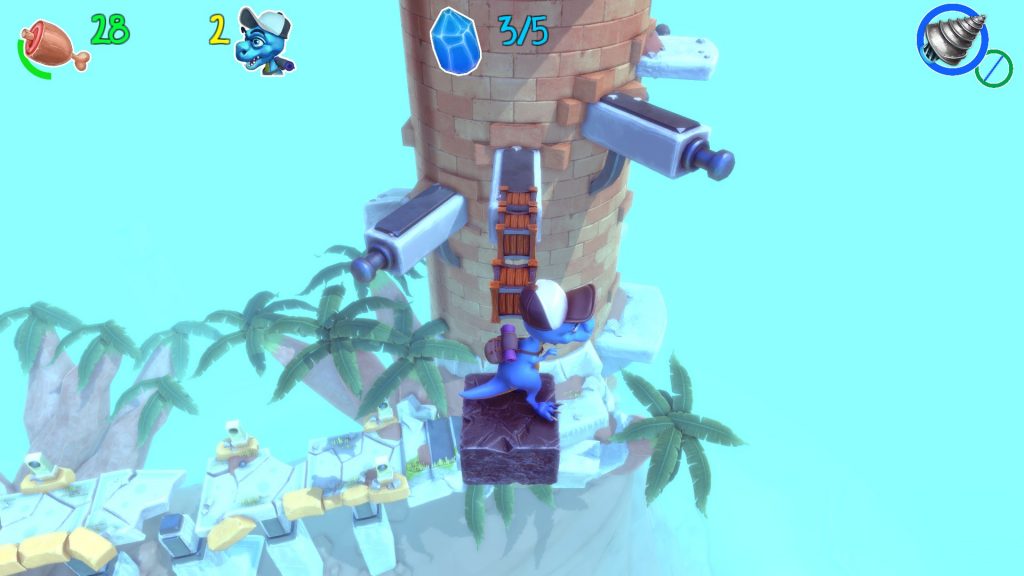 With a sympathetic main character, positive vibes from the music, and an art style doesn’t compensate for the big design flaws with the enemy placement and camera angles, this game falls a bit short of my expectations. It’s a shame since I really liked Borti, our little dinosaur hero who just wants to play football. The game is easy, even most of the hard levels are pretty easy to run through, but I didn’t mind. I had fun when the camera angles or the bad enemy placement didn’t ruin my gaming session, it was nice no-brainer gaming. I can see children liking this game, it has a positive and optimistic story, very colorful art-style and a happy feeling written all over it, but even for the fans of the platforming genre, I don’t see that this offers much for the players and for kids playing this, they may get really frustrated in areas when they shouldn’t be. Perhaps a patch can fix the issues, but for now it’s potential as a casual platformer is marred by technical issues.