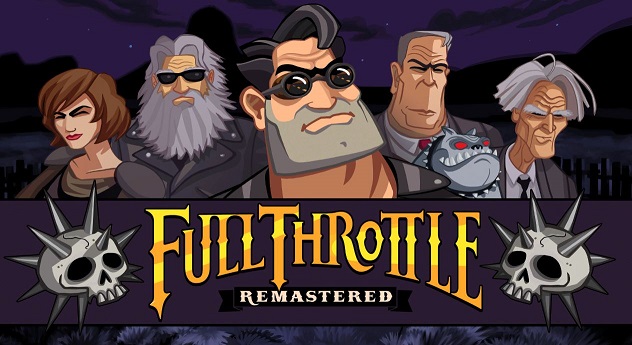 Full Throttle is a classic video game. It is from a bygone age of Point and Click Adventure games appealingly brought back to life in a spiffy new Remastered package. It even sports fine leather jackets to add a touch of unexpected sophistication!

Way back in the day there was a store, I’m sure many of you have heard of, bearing the unusual name of Blockbuster. The store rented games and VHS tapes… and eventually DVDs too. One time, I was in one of those stores when I saw a bin full of bundles of games on compact disc. I spotted some Star Wars ones and started flipping through to see what they had. They all had 2-3 Star Wars games and some random “junk game(s)”, so I eventually gave up and bought one that had all three of the Star Wars titles I was after bundled with some “trash game” called Monkey Island 4.

Monkey Island 4 sat on my shelf for quite some time just collecting dust. Due to being in the pre-Steam era and having a limited selection of PC games available to me, I decided to eventually play it for the simple reason that I had it… and that was how I was introduced to what I consider the greatest series of games of all times… the Monkey Island series. Many fans of the series will say that Monkey Island 4 was the worst of the series, yet I still enjoyed it enough that I bought Monkey Island 3, and eventually Monkey Island 1 and 2 and played them all. Those were glorious days in all their horrible pixelly glory. Nowadays, Monkey Island 1 and 2 might look kind of bad, but back then it didn’t matter if things were lifelike or not, or if the characters had eyelashes. The only thing that mattered back then was if games were fun. 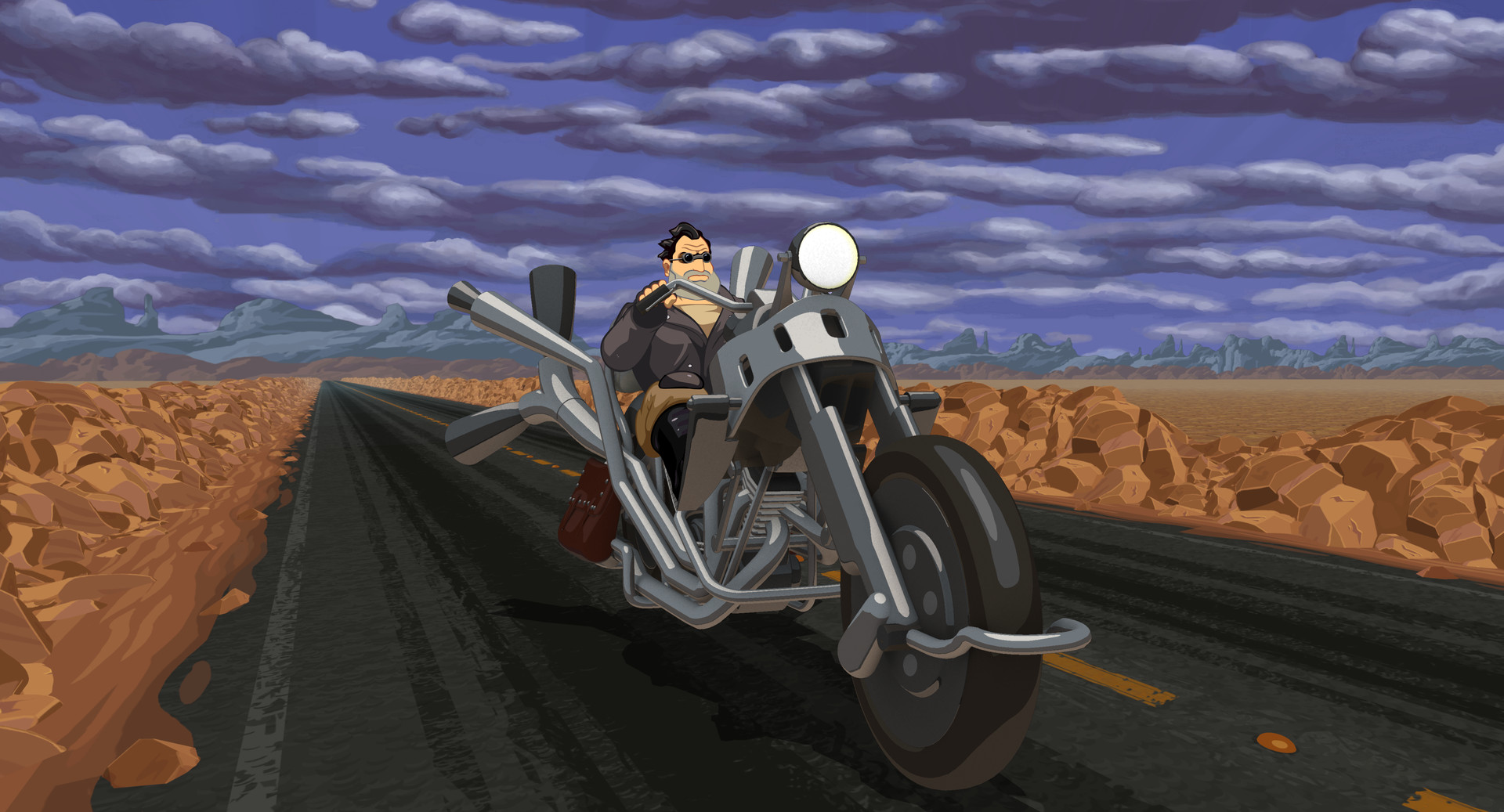 Now you might be asking why I dedicated a paragraph to Blockbuster and Monkey Island for a game called Full Throttle Remastered… Well, I get paid by the letter… and… wait… I am just being informed by the Editor that I am not being paid at all… well righty-o then. The real reason is that Full Throttle Remastered is basically like Monkey Island but without the Island or the monkeys… or anything related to that series other than the selling of fine leather jackets joke that Monkey Island had borrowed from the Indiana Jones games. Anyway, the point is, these are all LucasArts titles and LucasArts’ Point and Click Adventure games are some of the best Point and Click Adventure games available anywhere to date. When the opportunity arose to review one of them, I quickly and enthusiastically jumped at the chance, so that I would have something to do while my ankles healed. 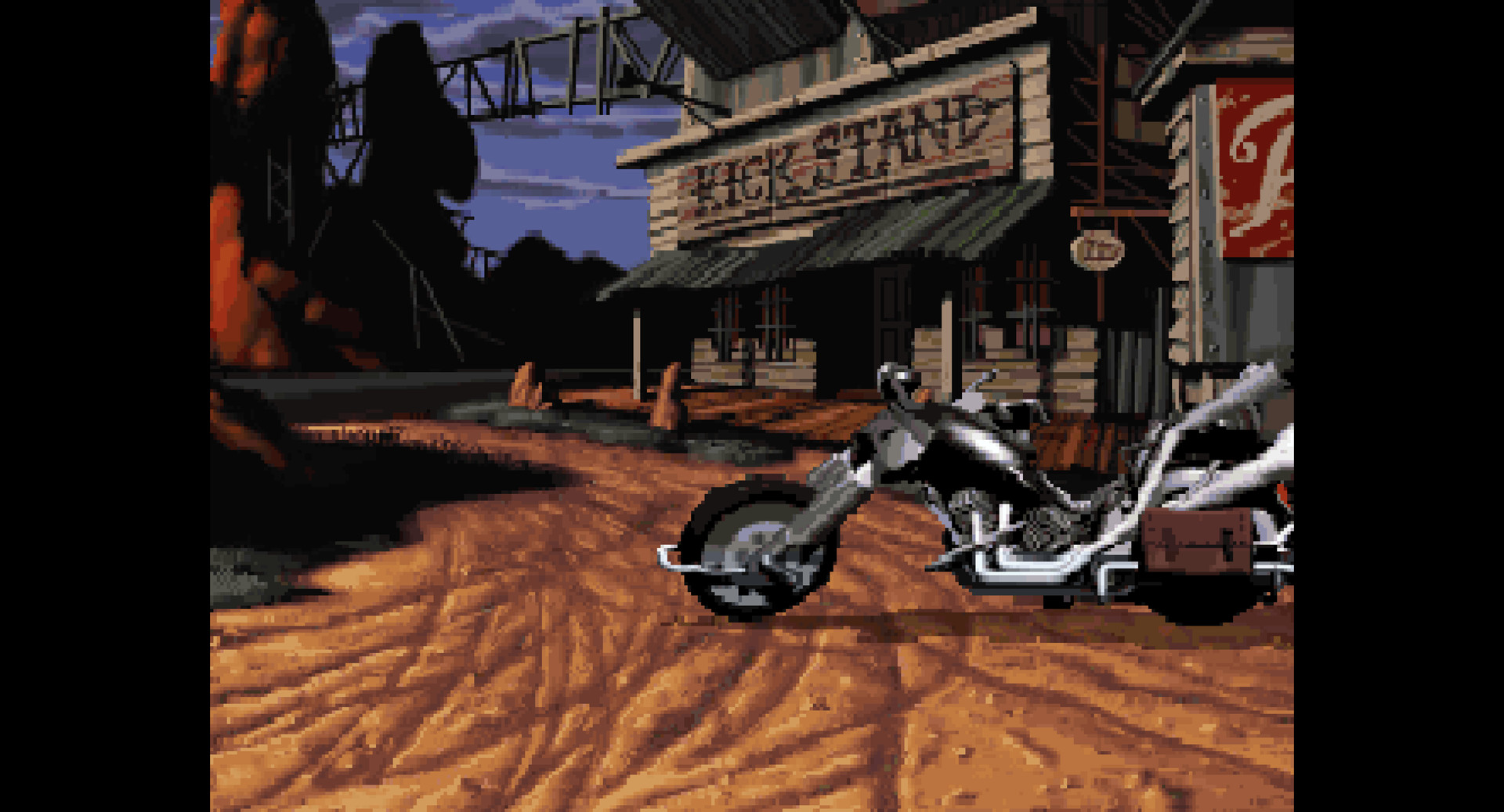 Now you are likely to be even more confused since I talked about Monkey Island and LucasArts and sang the praises of both when this is clearly a Double Fine game. It says so right on the loading screen “Double Fine”, and in that handy Save or Quit info box above. Clearly, someone wasn’t paying attention when this review was being written. Au contraire mon ami, Tim Schafer was working at LucasArts at the time Full Throttle was made, and also assisted in the creation of the Monkey Island series. So technically the classic version of the game is a LucasArts title, and the remaster was published by Double Fine (because LucasArts is mostly dead now… Thanks a lot Disney). So that previous paragraph was technically correct, the best kind of correct.

Now getting back to the topic at hand, the secret of Monkey Island is that the story isn’t 100% serious, it’s both funny and fun to play around in. It has an end goal and it is a series of random nonsensical things that transpire between the time you start and the time you reach the end of the game. The exact same thing can be said for Full Throttle, and subsequently the Full Throttle Remaster. The story has a plot, but as you work your way through it, absurd things occur to make the game far more enjoyable than if it had taken itself seriously. I can’t tell you too much without spoiling the puzzles in the game or the general events of the game, but I can give you a few hints and a clue or two. If you are looking for a game that lets you march an army of robotic bunnies into a minefield while the sounds of Wagner’s The Ride of the Valkyries dramatically but amusingly accompanies their progress, then this game is for you! Much like the Monkey Island games, the game is focused on exploring the various environments and solving puzzles. The story is driven through dialogue that you can have with the various characters in the game as well as cutscenes. There is also the ability to ride around on a motorcycle and beat up other bikers as well. (Note: Not advised in real life situations.) 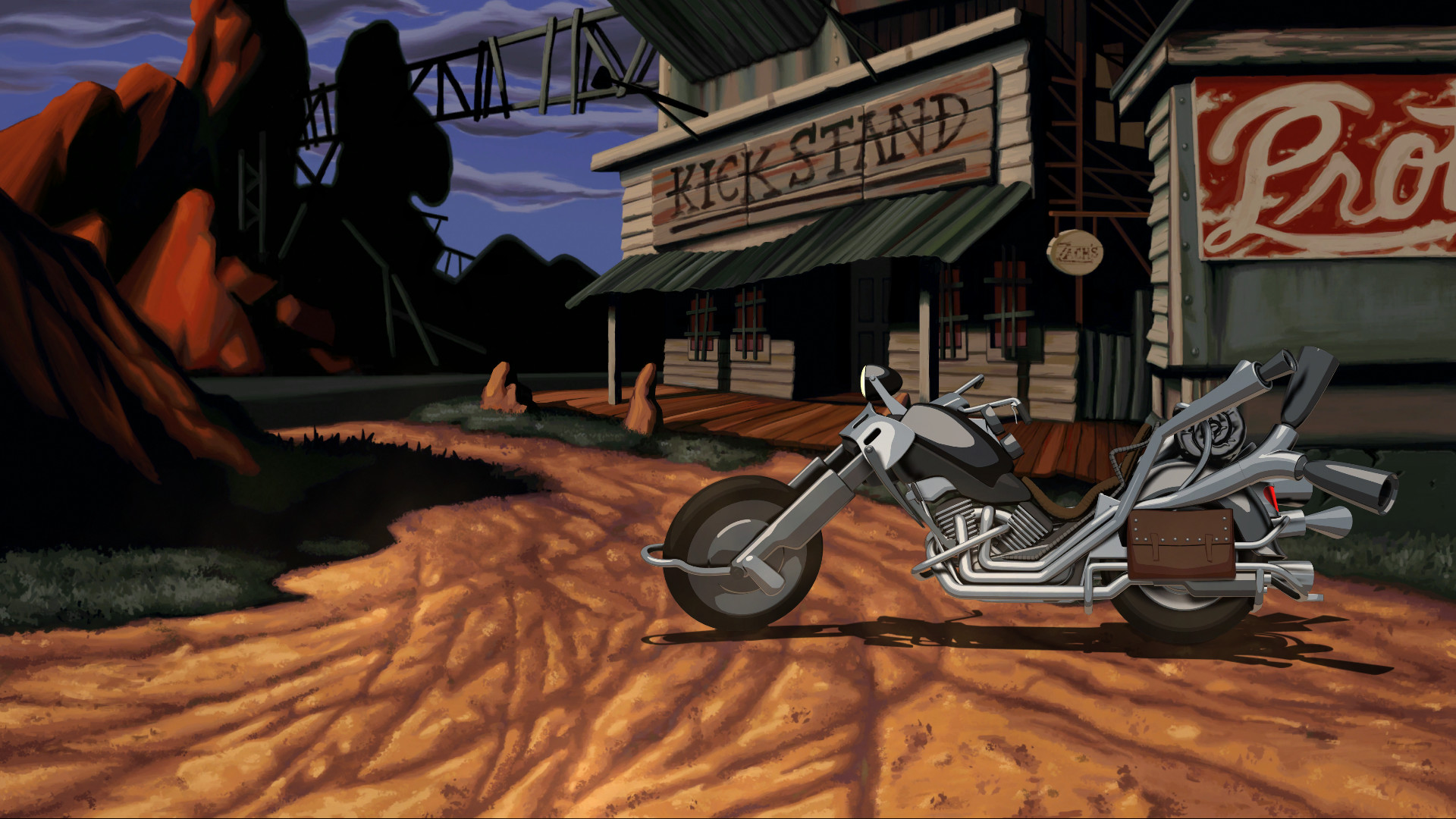 Full Throttle Remastered goes through only a handful of acts before the game finishes, but there is enough content there, despite it being short, that it still gives the player an enjoyable experience. The puzzles themselves are not especially all that challenging. One of them, in fact, is admittedly a wee bit annoying but overall the spirit of the genre is alive and well within it. You have to use your wits to solve some of the puzzles as the answers are generally not entirely obvious. A good example is in the junkyard. The most obvious solution is to distract the junkyard dog with some meat or a bone or something, but you don’t have either of those. You do encounter some meat while completing another puzzle. The solution isn’t to just give that dog the meat though, that would never work! You need to figure out the best way to give the dog the meat in such a way it will give you time to steal the item you need and get out of there. In fact, before you even get to that point you need to figure out how to get into the junkyard in the first place! 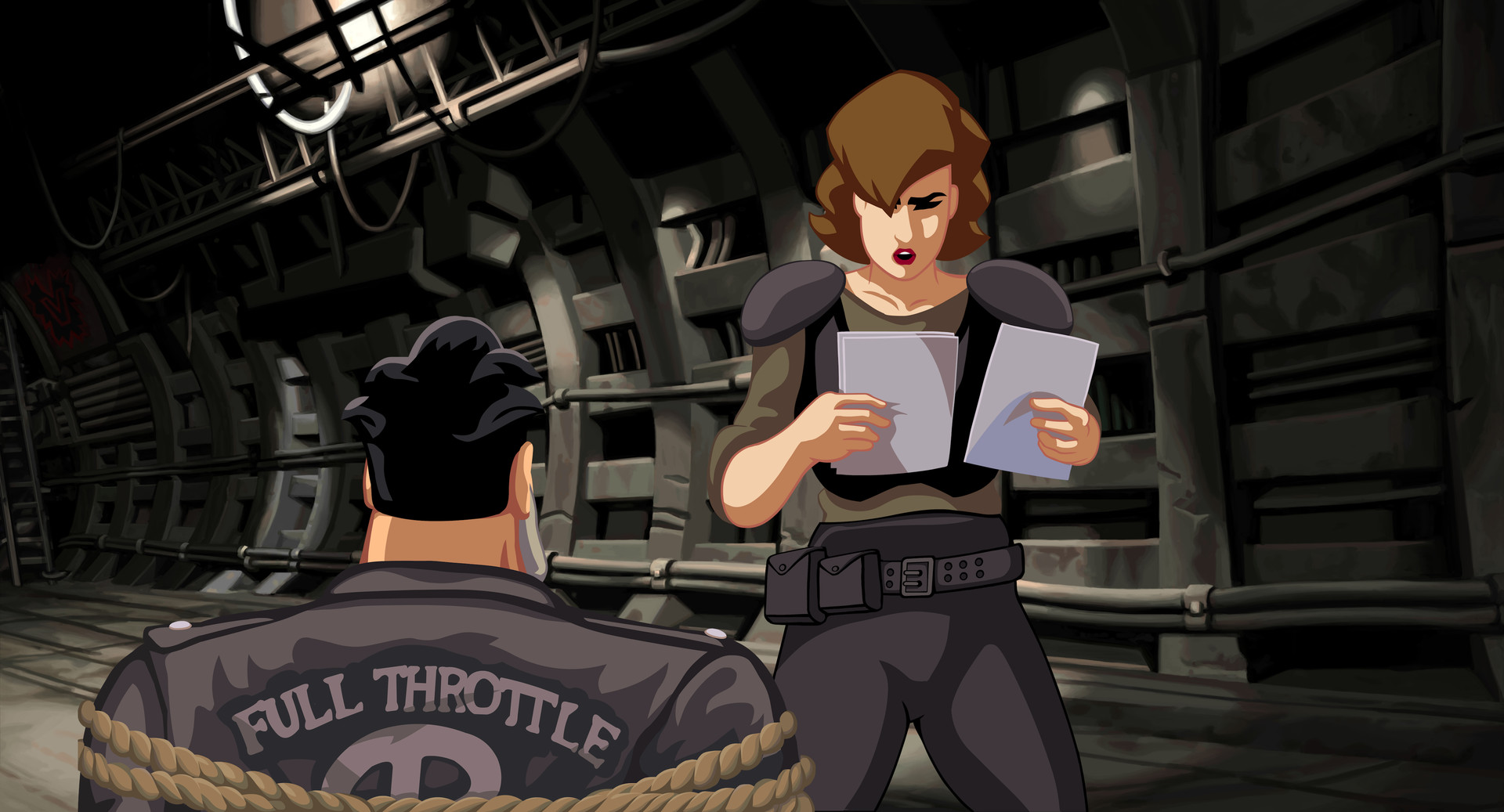 Graphically is where this discussion will get interesting. For those of you who must have pretty graphics, you can play the game in remastered mode (default) and see the game with a fresh coat of paint and its makeup done up nice. For those of us who played the game back in the day and thought the NES and then SNES looked amazing, the classic Full Throttle experience is also available. Since the game is unfortunately rather short, I actually played through both versions. The remastered version, which is admittedly a lot better looking, and the classic version which gave me nostalgia enough to write a long opening paragraph about how I got into LucasArts Point and Click Adventure games in the first place. With that said, I have to point out that the game felt a lot easier in the remastered version than the classic version. The cleaned-up visuals make things stand out far easier than they do in the classic style. I’d say play it in classic first if you want a harder mode, and in remaster mode if you want it to be easier and prettier. You have the ability to switch between the two modes any time you want, so if you are playing on classic and get stumped, you could always switch to remastered and then back again. 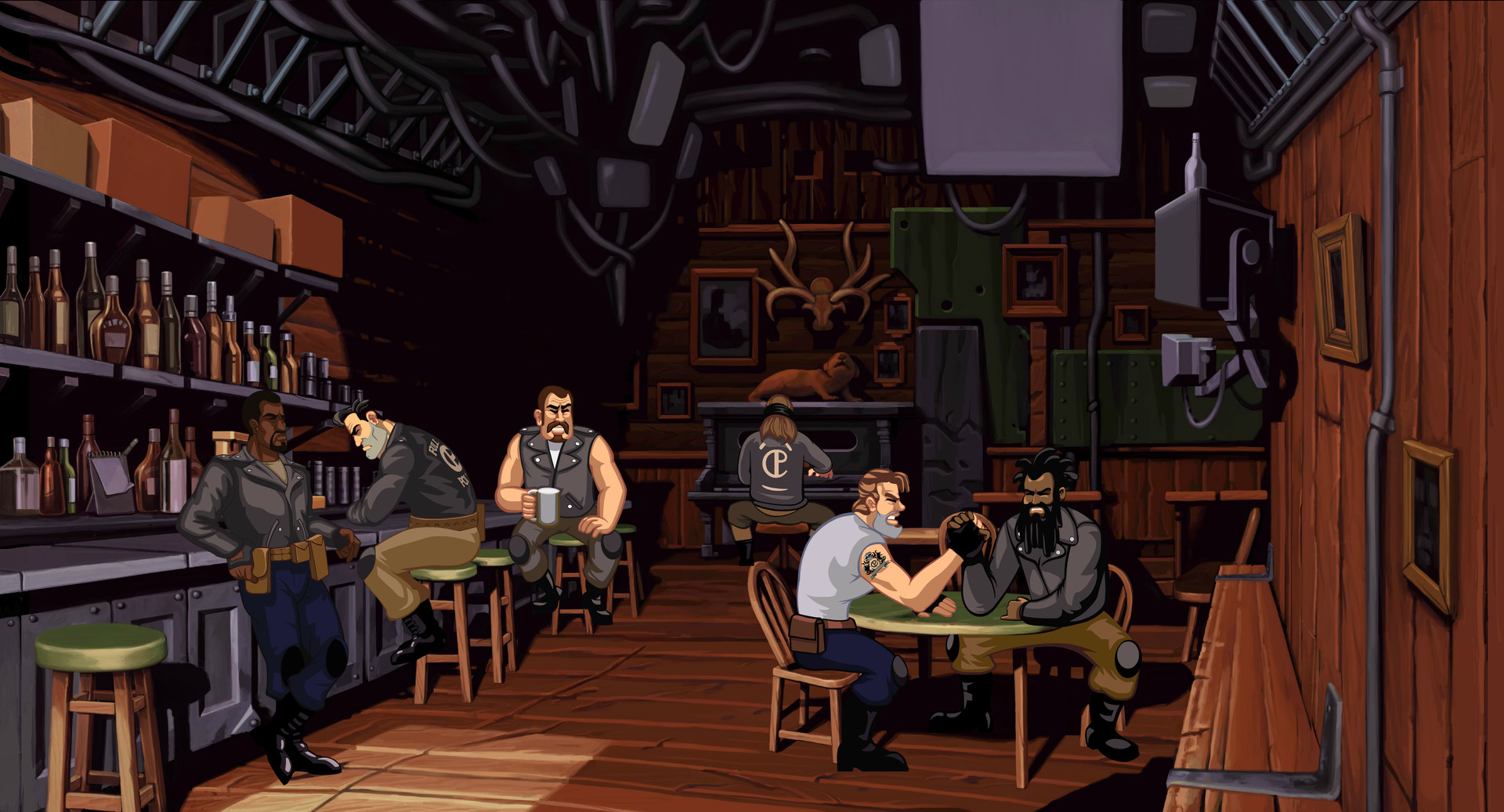 Full Throttle Remastered also features some pretty well-known actors voicing the various characters in the game. Such as Mark Hamill, Tress MacNeille, Jack Angel, Steve Blum, and Maurice LaMarche, just to name a few. Fully voice acted games back in the day were quite the novelty which was just another sign of the quality of the old LucasArts games. I know when I first heard Maurice LaMarche’s “Orson Wells” voice, aka “The Brain’s” voice from Pinky and the Brain, I knew I was in for a treat in this game. The sound effects, however, were all pretty basic, but they actually suited the game quite well. 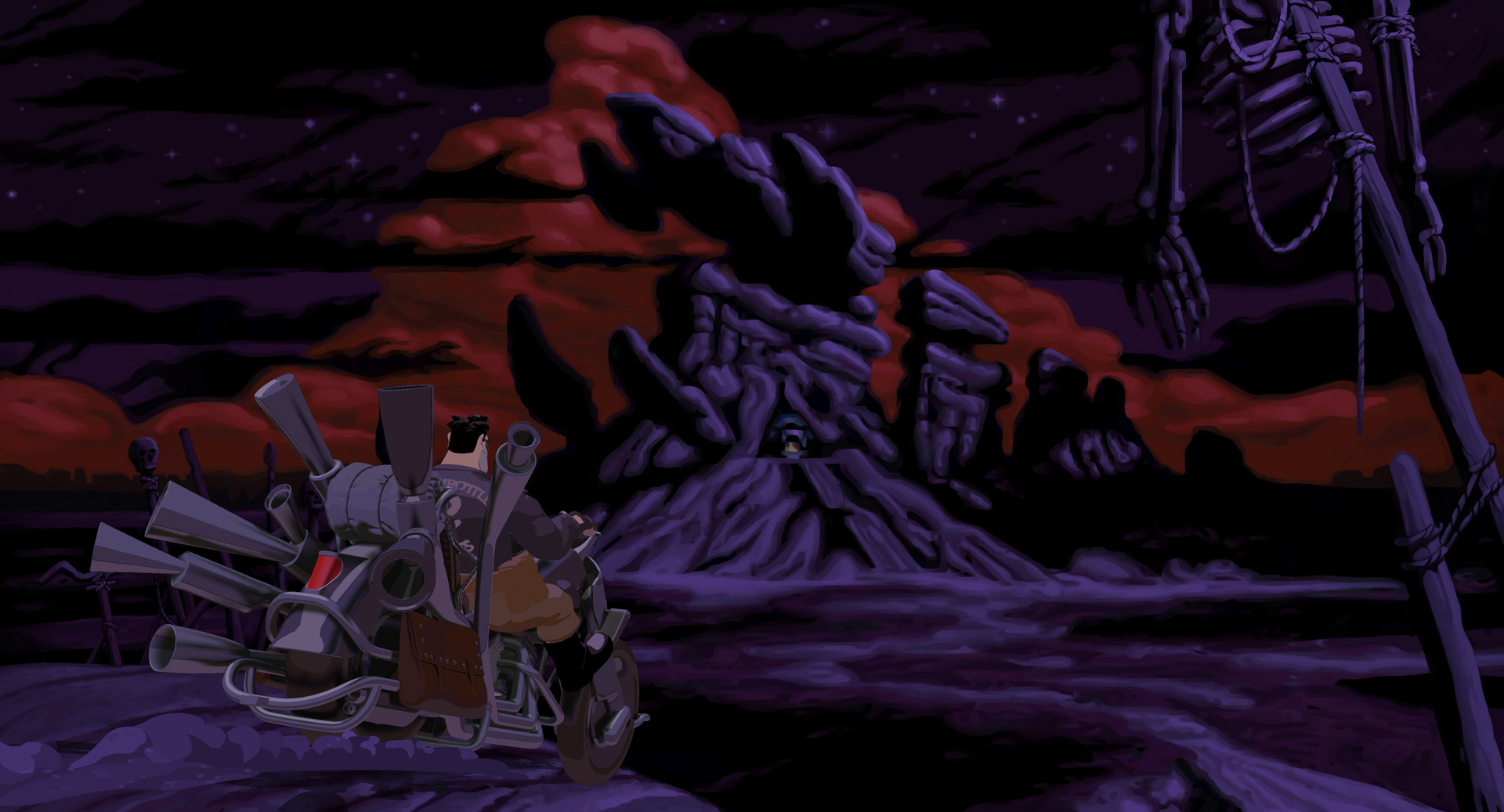 The controls in this game work very well and are very simple. The majority, if not the entirety of the game, can be played with the mouse alone. The default location for the peak feature is on the keyboard, and all that does is highlight objects of interest, something any self-respecting point and click adventure puzzler player would never do anyway. Sure controlling the bike is a little awkward with the mouse, and I did admittedly crash a few times because of that, but once you get the hang of it, it is actually fairly decent and intuitive as really all you are doing is moving left or right based on the road curvature and other objects on the road. 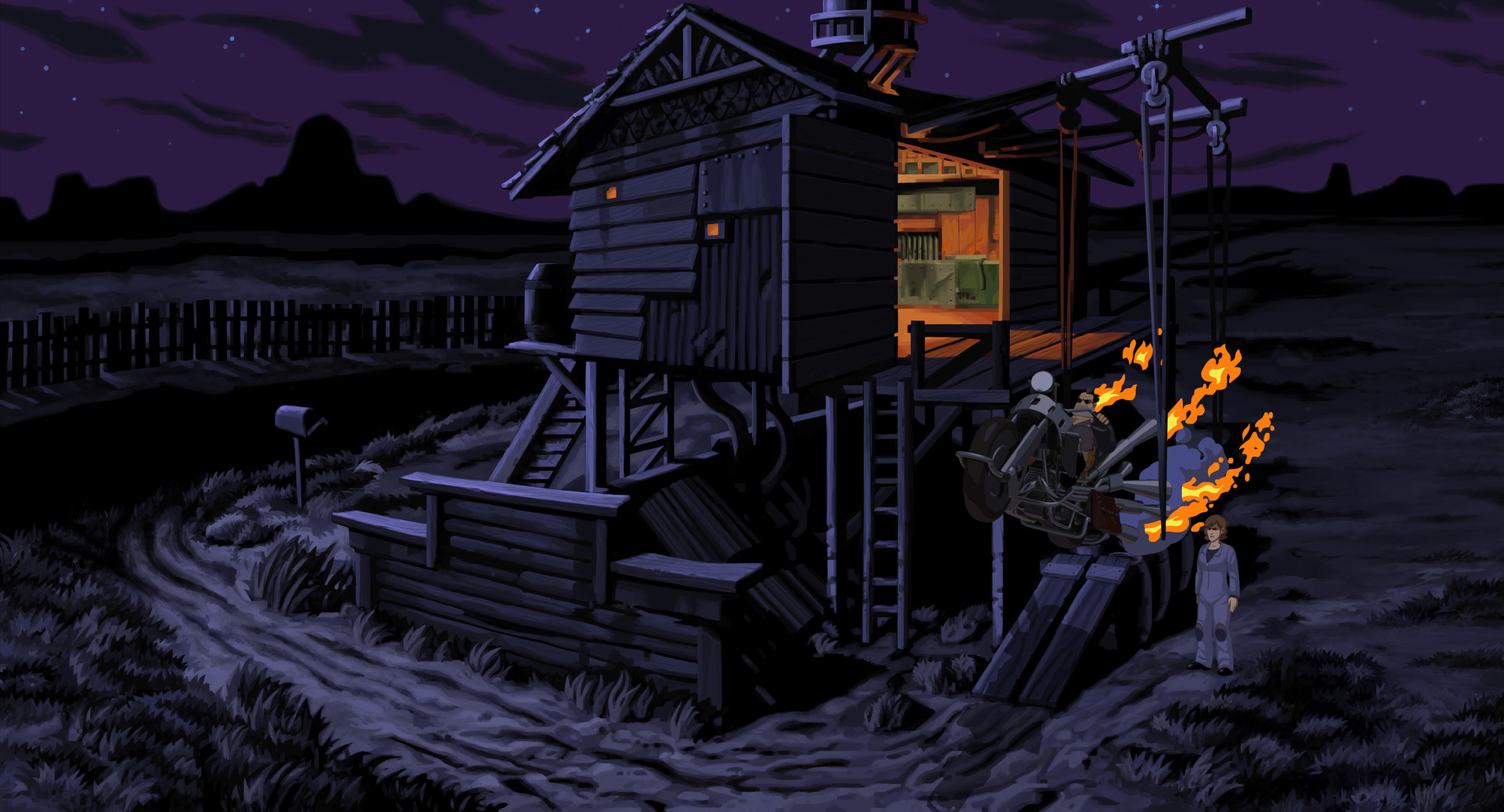 So, should you get Full Throttle Remastered? If you are a fan of point and click adventures then you would be doing yourself a favor to check out Full Throttle Remastered. If you are like me and long for the bygone days of when games were about the experience and fun, rather than true to life realistic graphics with gameplay as an afterthought, then you will want to check out Full Throttle Remastered. The characters in the game all have their own quirky and enjoyable personalities. The puzzles have the feel of the ones found in Monkey Island, although there is no improvised homemade voodoo root beer, insult sword fights, or rubber chickens with pullies on them, there are improvised rocket motorbikes, bike fights, and the aforementioned mechanical bunnies. I won’t be putting Full Throttle Remastered on the same pedestal as Monkey Island, but it is still a great game and one that I am definitely glad I had the chance to experience.