Play a science fiction door-to-door salesman whose space ship crash lands on a dangerous planet. Can you survive long enough to build another ship and escape?

Dig or Die is an open-world side-on 2D game that is a hybrid of genres. To me it seems part action platformer, part crafting, and part tower defence.

You take control of an unnamed salesperson for Craft & Co corporation. Your job is to travel the galaxy selling auto-builders — fancy machines that take raw resources and instantly produce fully fabricated machines, building materials, weapons, … , basically anything the user fancies. But you crash land on a vibrant and hostile world, inhabited by all manner of creatures that seem to only ignore each other, but set upon you with a vengeance.

Armed with only a few small tools (exactly what depends on your chosen difficulty) and your ship’s AI, still stuck in the crashed ship for now, for intelligent company, you need to craft a new ship to escape the planet.

The game is two-dimensional, played from a side view. The developers chose the popular “pixel graphic” look, but everything is detailed enough that it looks pretty good even at full HD resolutions. 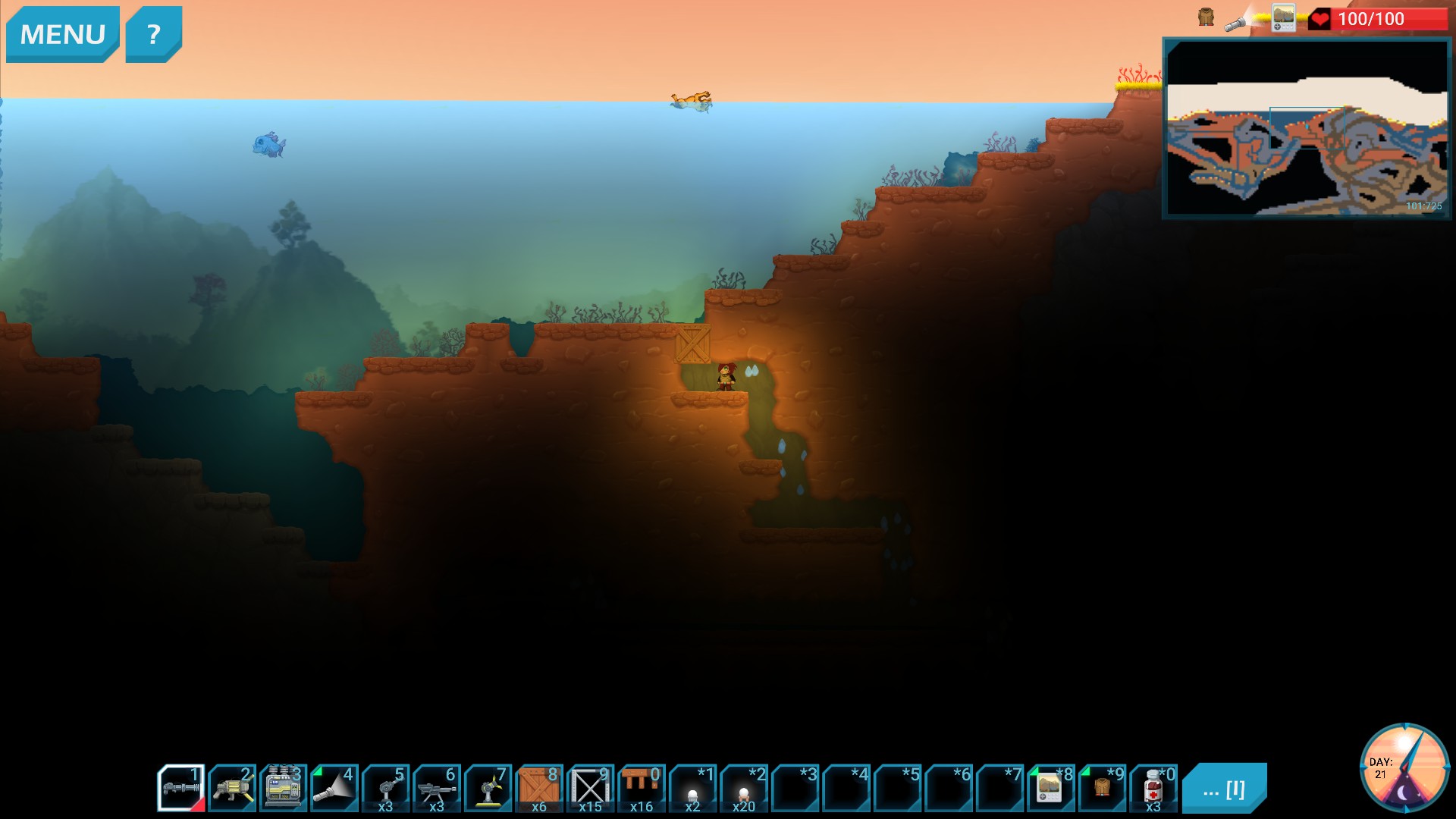 From what I’ve seen there’s not a huge range of enemy types, which is a bit disappointing. Each base enemy type seems to be reused multiple times to make more powerful enemies, so while the number of enemies is quite high, they fall into only a small number of base groups. The enemies that are here are reasonable well drawn and animated — with the possible exception of the hounds, which seems to animate very coarsely — but I would have liked to see a few more interesting enemy types appear as I progressed.

The world looks nice, with backgrounds and lighting that change with the day/night cycle, multiple block/tile types to dig, harvest, and build, and an array of flora to be harvested. Water plays a special role in the game and must have a special liquid physics implementation in the game. It fills up tunnels and soaks through certain block types, and looks rather nice. A few dirty particles and bubbles here and there wouldn’t have gone astray, but maybe wouldn’t have fit that well with the pixel-graphic look. 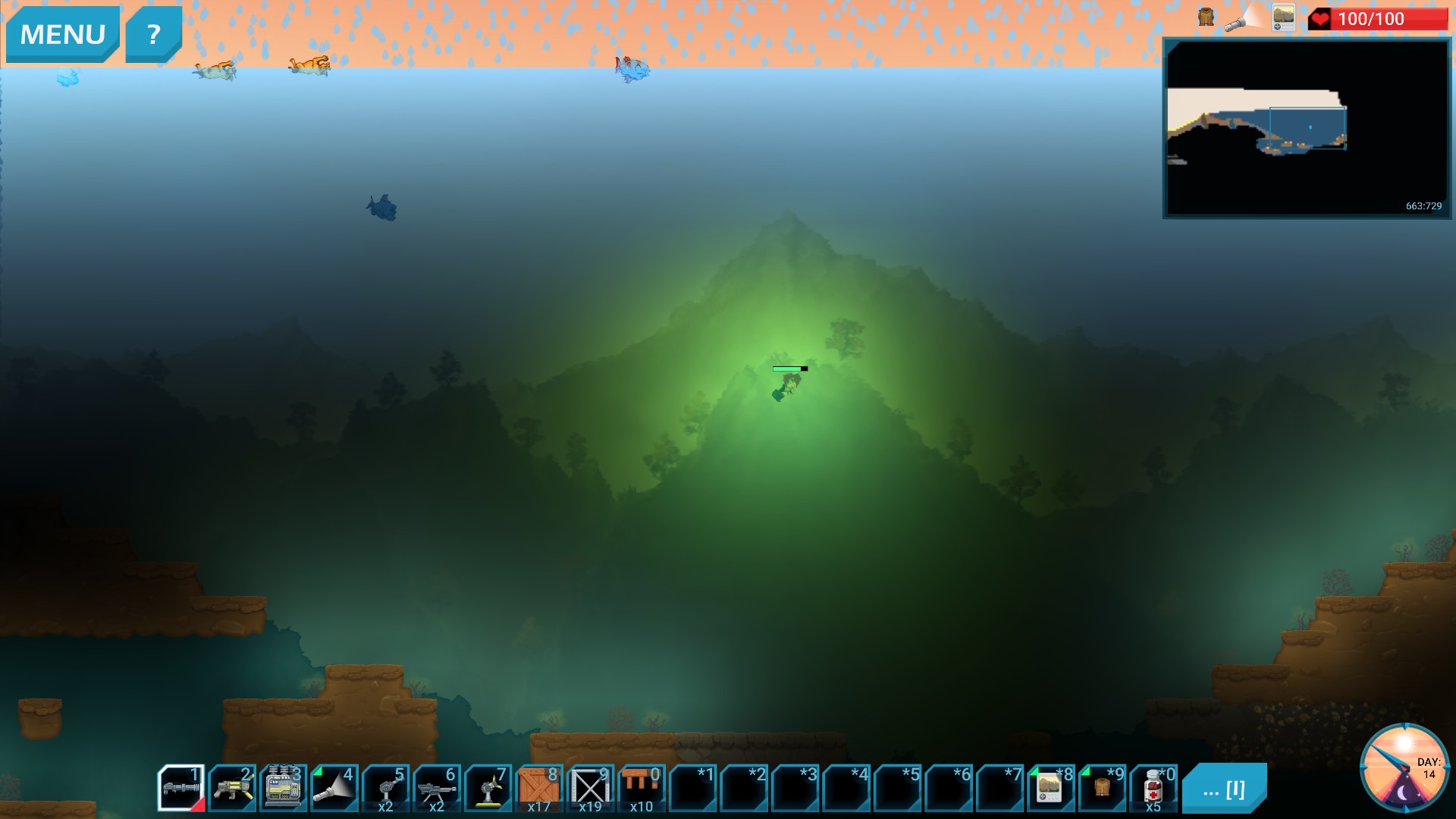 The protagonist’s appearance can be chosen by piecing together a number of different selectable body part styles, which is a nice touch. I like the way the character sprite changes based on weapons and equipment in use. Character animations are good and weapon and special effects are great; the dynamic lighting from weapon shots both looks good and is very useful in the game. Dynamic lighting in general is really good. 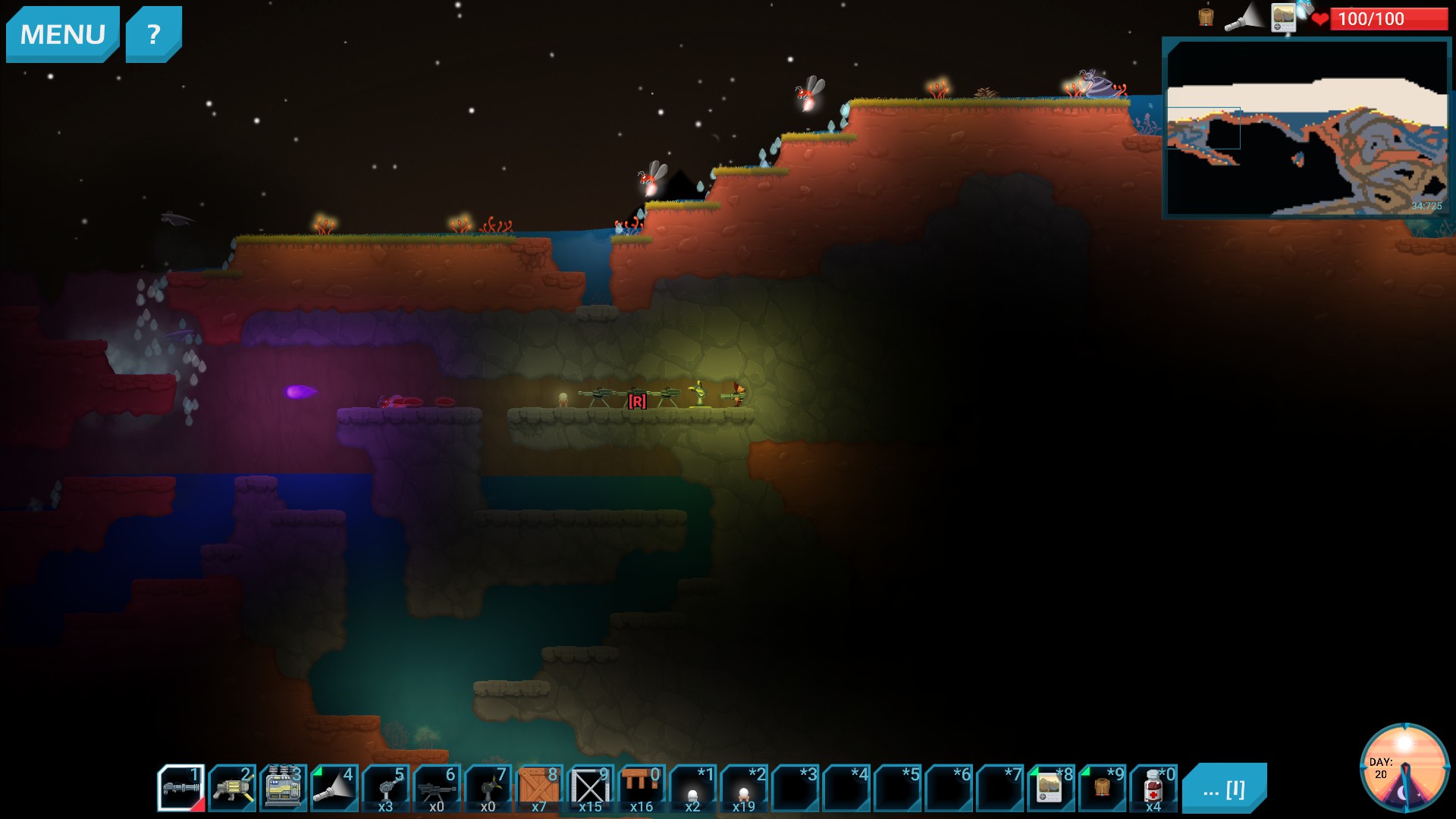 I found the interface took a little getting used to — it’s very sparse to begin with, but even once you’ve unlocked a couple of useful tools it still seems like it’s missing something — but it works well and ultimately does everything you need. The very long hot bar at the bottom is useful for having quick access to many tools, but after the first 10 I wasn’t sure how to get a one-key use of the others, so I reverted to the mouse.

The music is mostly excellent, with the soft melodic electronic tones of the day-time tracks feeling soothing and the high-tempo, loud beats and riffs of the night-time tracks instantly putting me on edge, prepared for a battle. One night-time track I didn’t much like, though, sounding like little more than loud electric guitars and noise. Sound effects are fine, but nothing to write home about. A few more animalistic noises and some sloshing water sounds would have been a nice addition, but it’s fine without them. There are no voices. Basic gameplay involves exploring the 2D world — mostly below the surface — using your handy miniaturizer to dig dirt, rocks, and different ores and convert them into useable components in your inventory, as well as to collect and harvest plants and trees. While you’re doing this you’re being attacked by the hostile fauna, which you can attempt to avoid or kill with your trusty unlimited-ammo plasma weapons, collecting any resources they drop.

When each day is almost done you’re warned of the imminent onset of darkness. This is important because angry creatures of all the species that you’ve killed begin to spawn near you at night, intent on your demise. The warning gives you time to set up a temporary camp, complete with defensive turrets, lamps, and the like — or to make haste back to your more permanent base, if you’ve built one.

I love 7 Days to Die and found the idea of “massive attacks” each night interesting. I love the way 7 Days to Die makes really worry about surviving another night and I was hoping for a similar thing here. While the basic gameplay is the same as a 7 Days to Die blood moon night — a mix of base building and tower defence against angry psychic enemies — the sense of danger is simply not present here. I think it’s due to both the less immersive presentation and the option to reload your last saved game when you die; the only penalty for failure is having to try again. But it is still good fun! 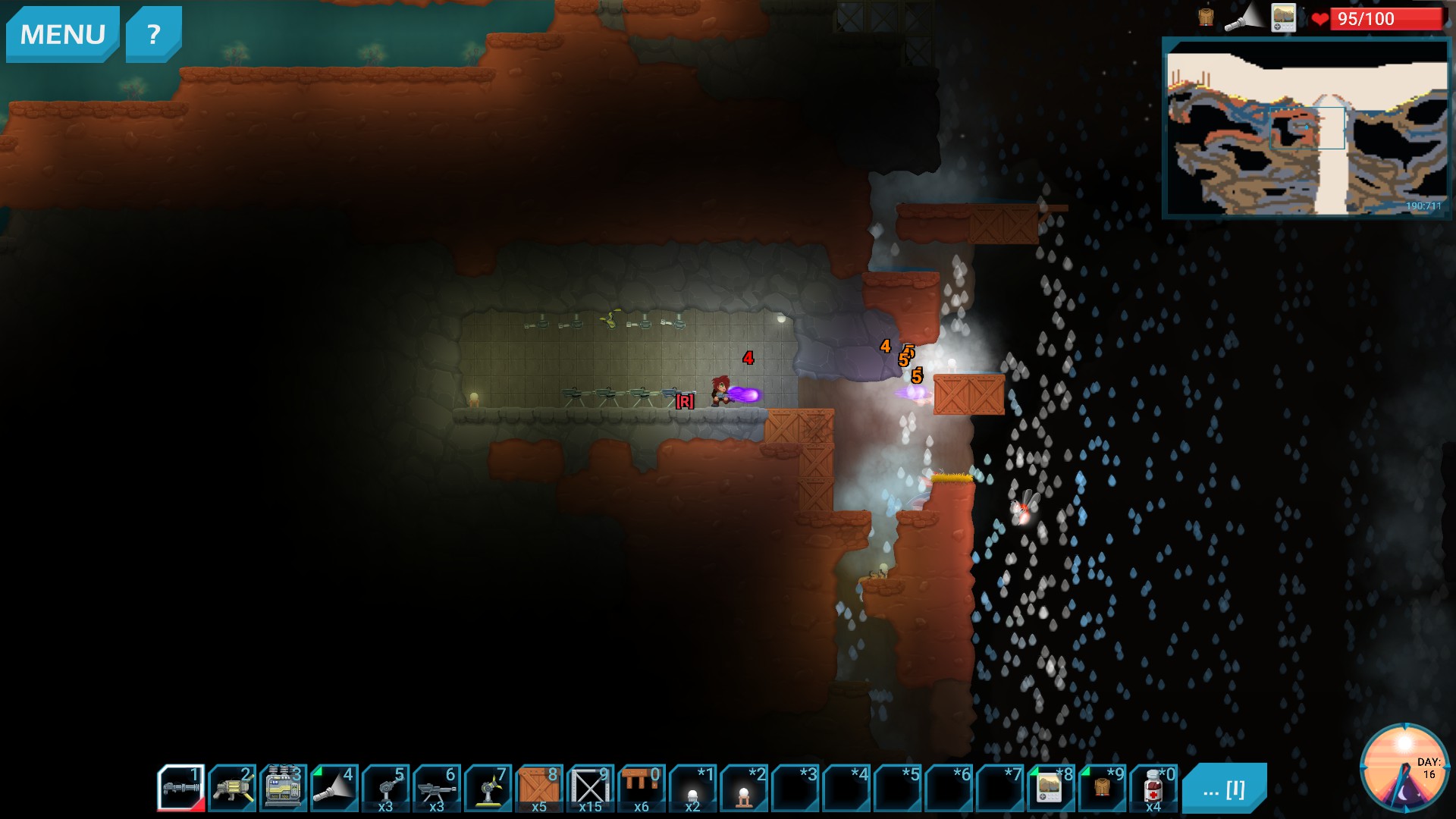 Crafting and building are sort-of level-based, in that the recipes available are only based on the level of the auto-builder; upgrading that unlocks a new set of recipes and upgrades. Tied into this is the miniaturizer, which needs to be upgraded with each level of auto-builder in order to be able to harvest new resource types, which are then required to build most newly unlocked recipes. So reaching the end goal — creating a rocket ship to escape — is really made up of repeatedly crafting new auto-builder/miniaturizer pairs, which usually require travel to a new area or killing a new enemy type. 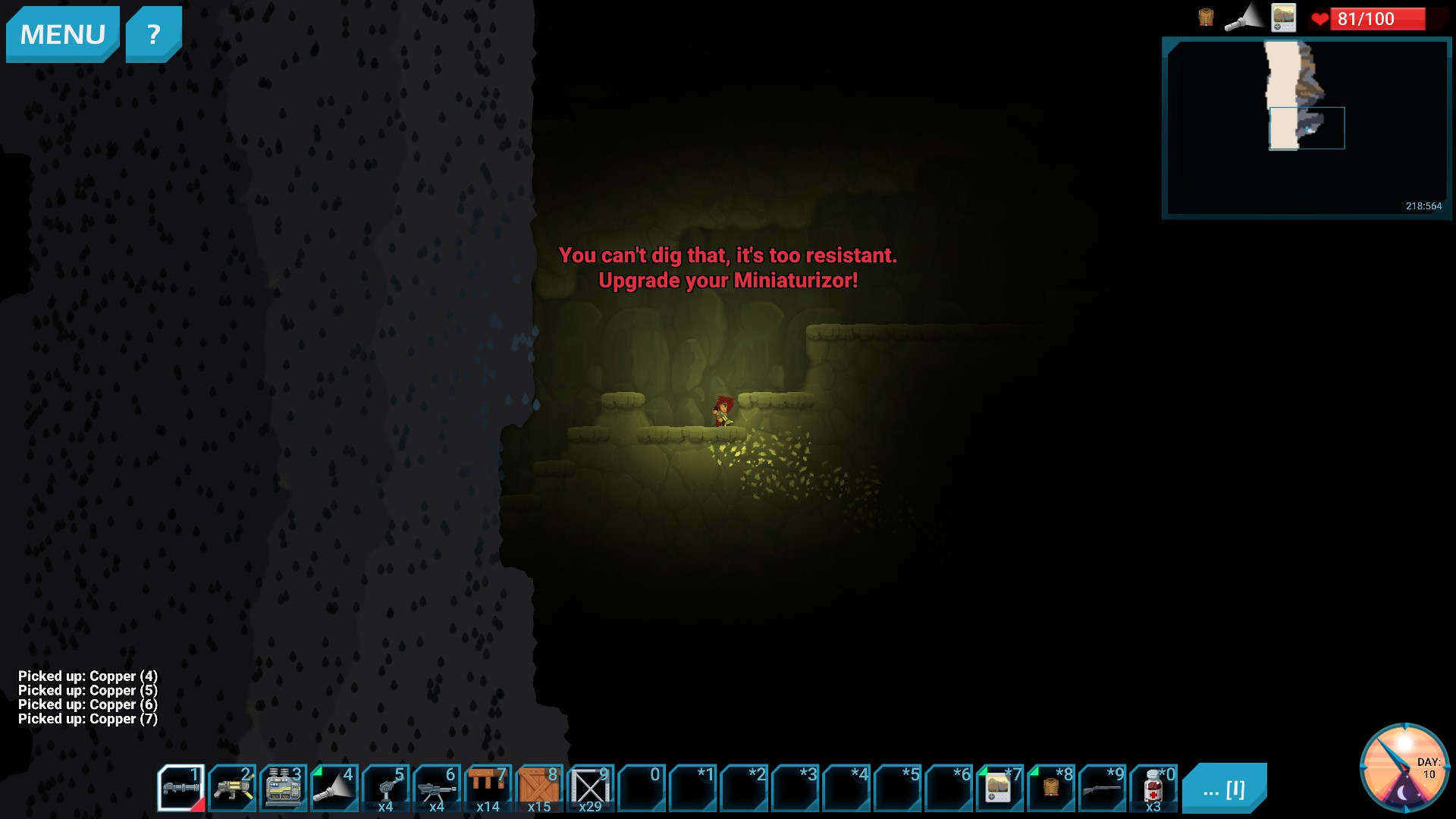 There’s a lot to craft along the way, though: weapons, turrets, building components, etc. You can also build electricity networks based on solar or hydro power, and unlock some useful tools, such as a minimap or a metal detector. The goal of all of this is to survive the increasingly dangerous nights. 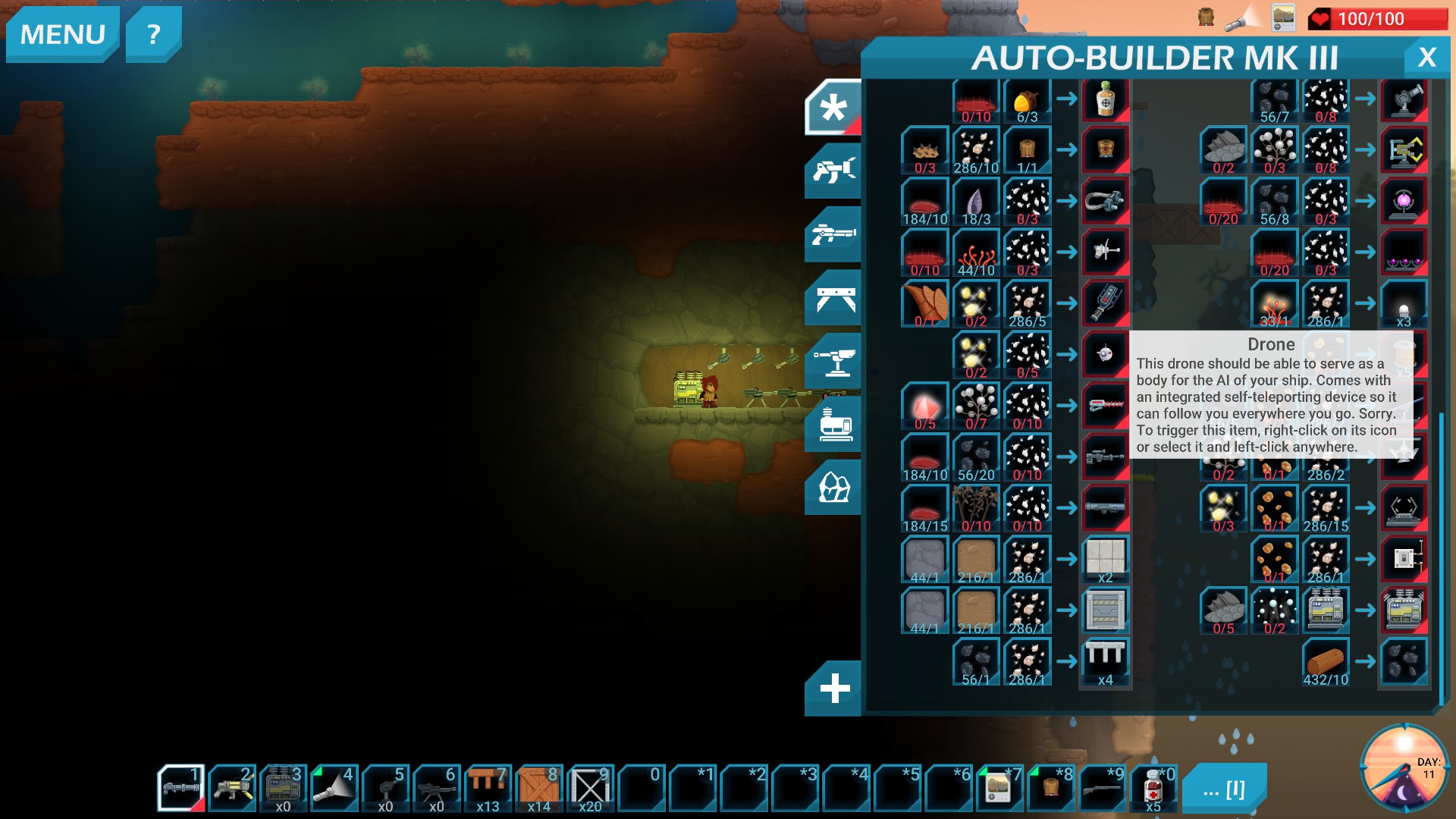 I’m not yet near to escaping the planet; in my best game I almost have what I need for the Mark IV auto-builder. While admittedly the game is fairly repetitive, it’s also interesting in places, and addictive. Increasing the replayability is procedural generation of the world, which seems to retain some basic landmarks — a chasm to the West, a mountain to the East, etc. — but gives you a different distribution of tunnels, rocks, etc. There are also multiple difficulty levels, which both toughen up your enemies increase your numbers, and change your starting equipment.

To me the game falls short in a few minor ways: invisible walls at the edge of the world, no bestiary, no zoomable map with waypoints, and slippery controls that sometimes don’t work when you first fall into water. I didn’t see any bugs that I noticed, but the large pauses when saving are distracting. Also, ground creatures often drop from the sky, but it could be that they’re falling from a higher platform.

Survival-crafting fans may take issue with the “survival” tag. The only survival here is not getting killed, which could be said of any action game. I tend to agree that it’s misused here, but I don’t think it detracts from the game; it should simply be removed from the store page.

The game has multi-player, too, but I don’t know how it works; I couldn’t find a game. 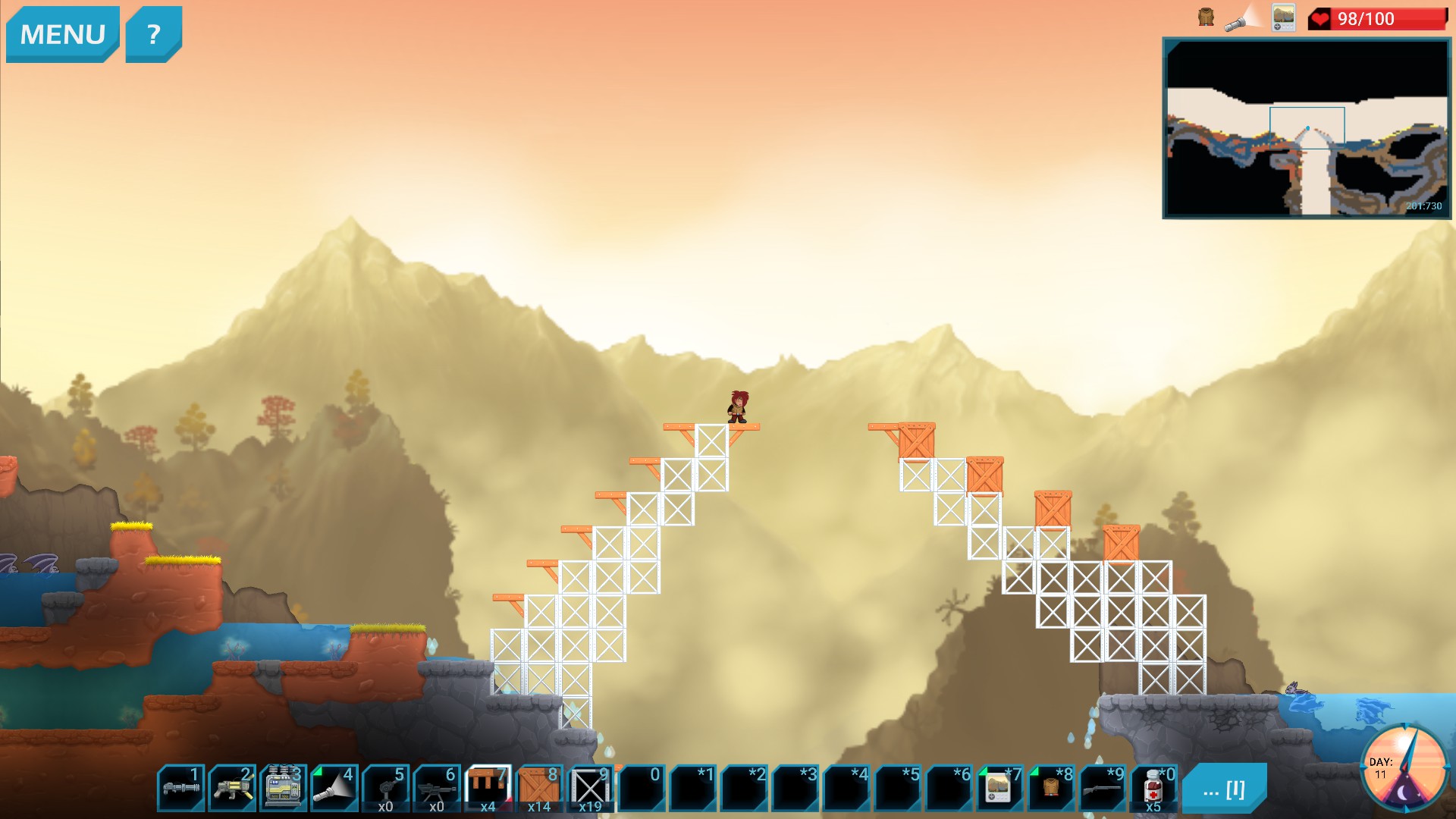 I haven’t played anywhere near as much Dig or Die as I’d like to, which alone is probably enough to recommend it.

It has a fun and addictive gameplay loop, pretty graphics, nice music, and a large open world to explore, along with lots of stuff to build. There’s a lot here to like.