Some interesting resource management isn’t enough to save this tower-defence title from monotony.

Battle of Kings is a tower-defence game set on three islands that comprise two kingdoms, one ruled over by you and one by your cousin Marcus. I’m not sure where the original boundaries lie — was each island split in half, or did you each have one-and-a-half islands? — but ultimately it doesn’t matter, since Marcus has turned out to be an ambitious sort, forming an alliance with the dark wizard Arfael, and is now set on taking over everything. Typical!

Ultimately, though, the story doesn’t matter. You don’t meet your cousin or the dark wizard; they’re just excuses for the action. But I am rather interested to see what sort of crazy weather they must have in the kingdoms, what with the three islands having completely different climates.

(Aside: I know; I’m being picky. But it just seems so silly! Why islands? Why bother with the three different climates when they don’t make any difference to the gameplay? And if the developers really wanted the variation, since they’ve already involved these magical portals for teleporting troops around, why not just have the kingdoms separated by a more realistic distance? It just doesn’t make any sense! *sigh*)

The graphics in Battle of Kings are relatively simple, looking reminiscent of a mobile game. They’re bright and colourful, but with relatively simple textures and very wooden-looking animations for the troops. Towers mostly look nice and are easily distinguished, with good effects for the ‘spray’ effects (acid and fire) and the puffs of smoke from the cannon towers.

The game appears to be full 3D, but it has disappointing camera controls. The camera is fixed in rotation; you can pan it about with WASD and you can sort-of zoom with the mouse wheel, which moves the camera along a path nearer to ground level and closer to the battlefield. But there’s no manual rotation about any axis, so even when you’re zoomed in all the way you rarely have a good view of the action. 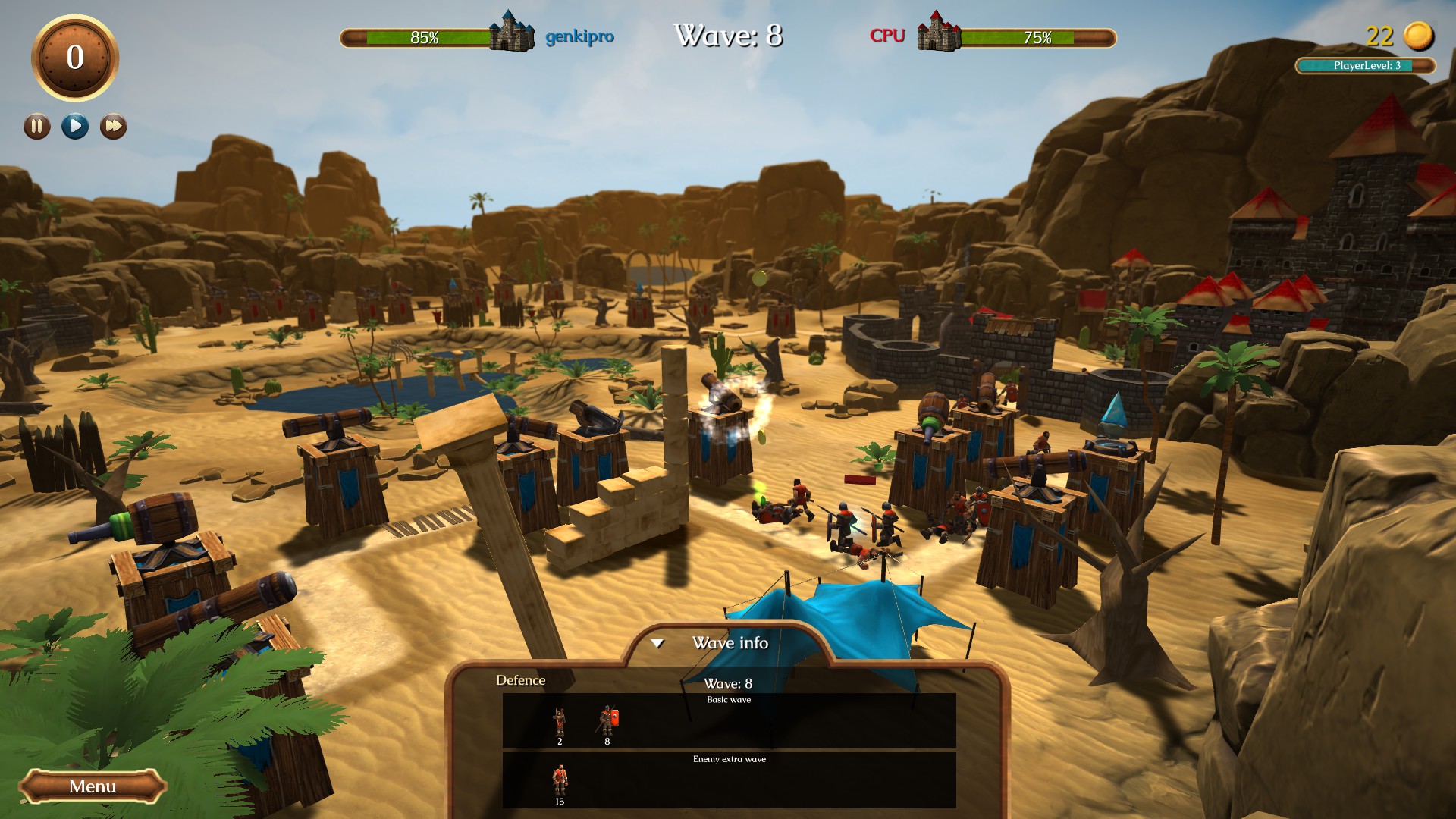 Sound effects are good, with each tower having its own sound effect and the death cries of your opponent’s troops forming a nice counterpoint to the boom of cannon fire, even if each soldier does sound the same. Sounds are localised around their sources, meaning that the further away you are the lower the volume. Music is okay: a bit drum heavy with some dramatic melodies. It’s pretty repetitive, making me suspect there’s only one or two tracks, though I confess I didn’t pay too much attention. It just sort of blends in. The game’s narrator, Cedric, seems to be voiced professionally, which is a nice touch, but not really necessary.

I noticed a couple of grammatical errors, which is a bit of a shame for a game with so little text, but it’s not terrible. Settings-wise, there’s a single graphical detail setting with three options: Low, High, and Ultra. Other than that there’s a resolution setting, but no options for full screen / windowed mode, and no vsync. The game really needs vsync; I can feel my GTX 1070 melting under my fingers. 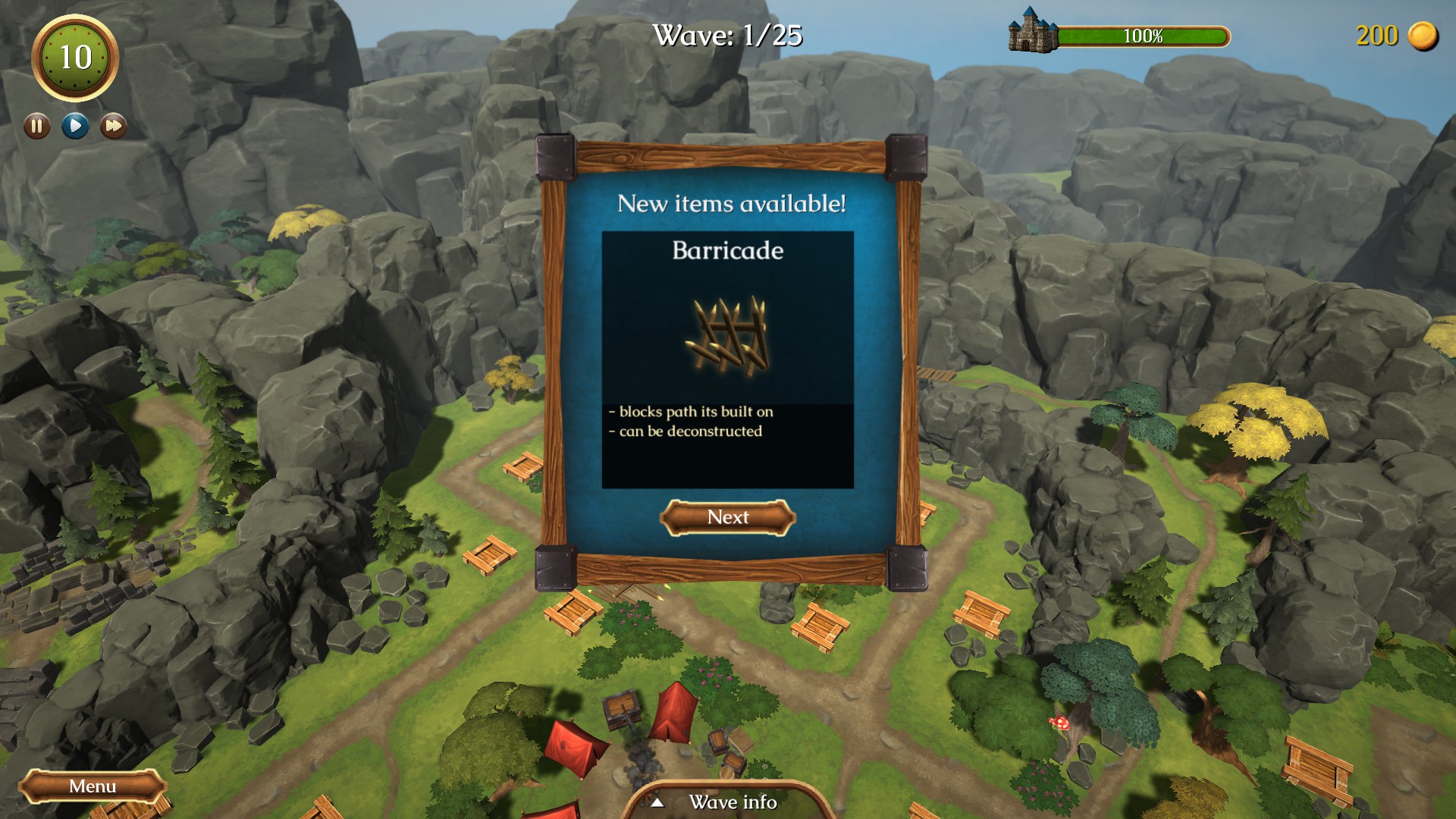 The campaign mode in Battle of Kings is very short and repetitive, with the only challenge coming from the developers artificially beefing up the enemy’s resources in the final battle (i.e. cheating). The campaign is set over three islands — grassland, ice, and desert (original, hey?) — each with five battles. The first four battles on each island are typical tower defence. With only six tower types (one of which should really be an upgrade of another), and upgrades that simply increase damage, range, etc, and some levels with over 25 waves of enemies, you’ll be forgiven for drifting off every now and then. The small and uninteresting range of enemy units only makes it worse.

The fifth battle is far more interesting, though, like PVP tower defence. Here each opponent has a base with 20 hit points (each troop that gets past does 5% of total damage), and each wave you’re provided with slowly increasing base units with which to attack. In your preparation phase you spend your gold — the amount of which you receive is primarily determined by your mine level — on both towers to defend against your opponent’s attack and extra units to add to your base attack wave. Each extra unit you purchase also adds an amount to your player level bar; once this fills you gain a new level, unlocking characteristic improvements to units and, most importantly, an extra gold mine level, which you can purchase the following round. 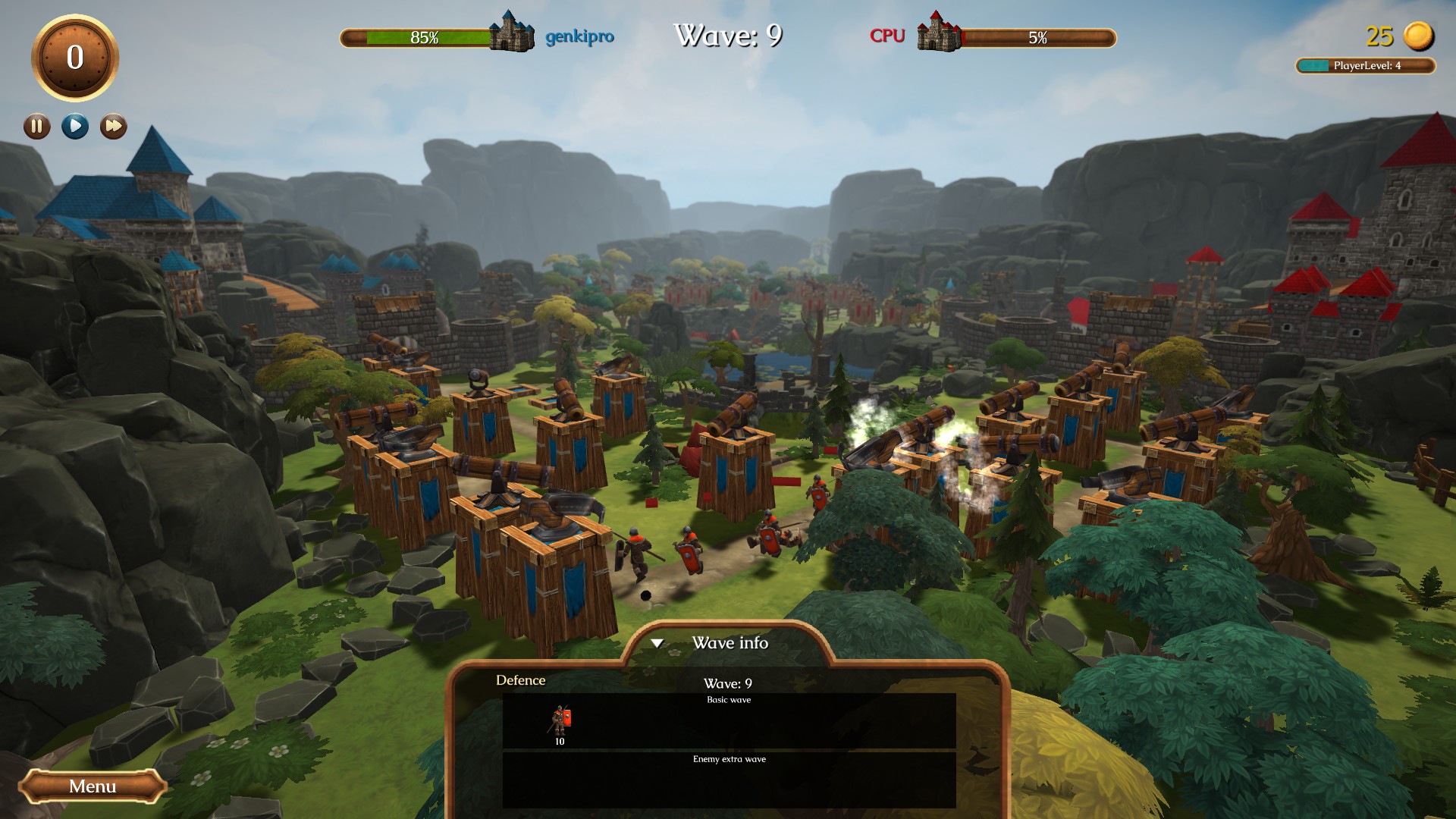 Unfortunately you can’t control the order or grouping of units and you can only buy up to 15 extra units in total in a round, but it does provide a bit of variation in what would otherwise be a rather short and banal campaign mode. After spending about three hours racing through most of the campaign and then over an hour repeating the final battle I finally gave up in disgust after my opponent sent more gold’s worth of extra troops at me than I had in total, three waves in a row. I’m sure it can be beaten, but I simply can’t be bothered wasting any more time on it.

So after the campaign, what else is there?

Well this is where the longevity of the title is really tested. You can play the versus battle mode over and over on any of the three terrains against CPU players of three difficulty levels — I’m assuming the awful final campaign battle must be “heroic” — but honestly it gets pretty boring after only one or two goes. There are so few towers, troops, and upgrades for both that once you’ve played the campaign or a couple of battles you’ve seen all the game has to offer. But, if you can find human opponents online — I couldn’t, but I was playing a pre-release version so that’s probably why — then you can also play this mode against them, which I imagine would be far more interesting. 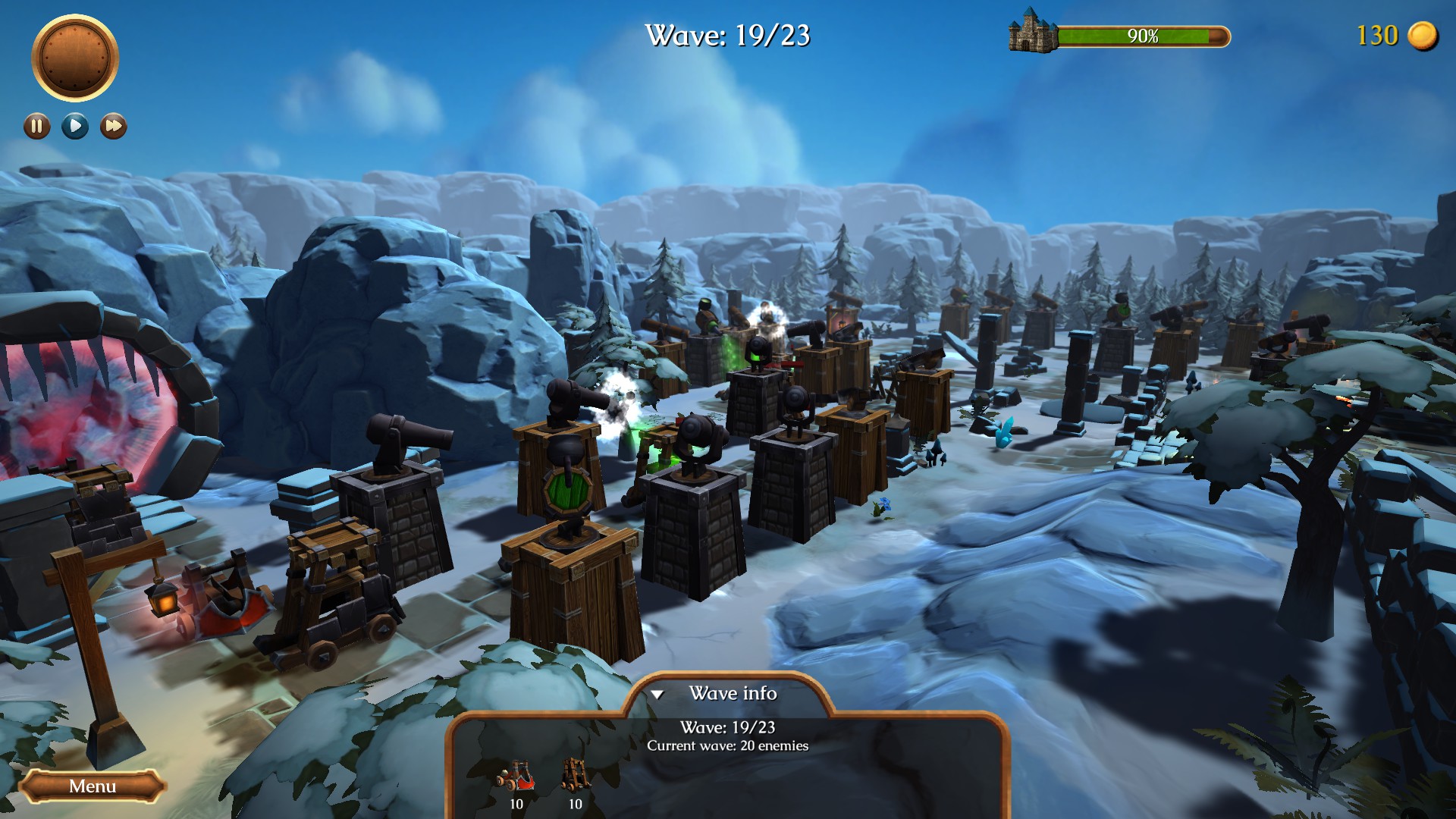 Other than the lack of multi-player opponents and the rather lacklustre array of towers, troops, and upgrades, I also noticed that towers don’t always hit — especially cannons. I’m not sure if this is a bug or a feature, but I thought it was worth mentioning. Other issues are the unlock alerts when unlocking new towers are wrong in one instance (booster towers / flamethrower towers should be swapped), and the tower balance is pretty bad in the campaign; apart from the last battle you can get through the whole thing easily using only three tower types. 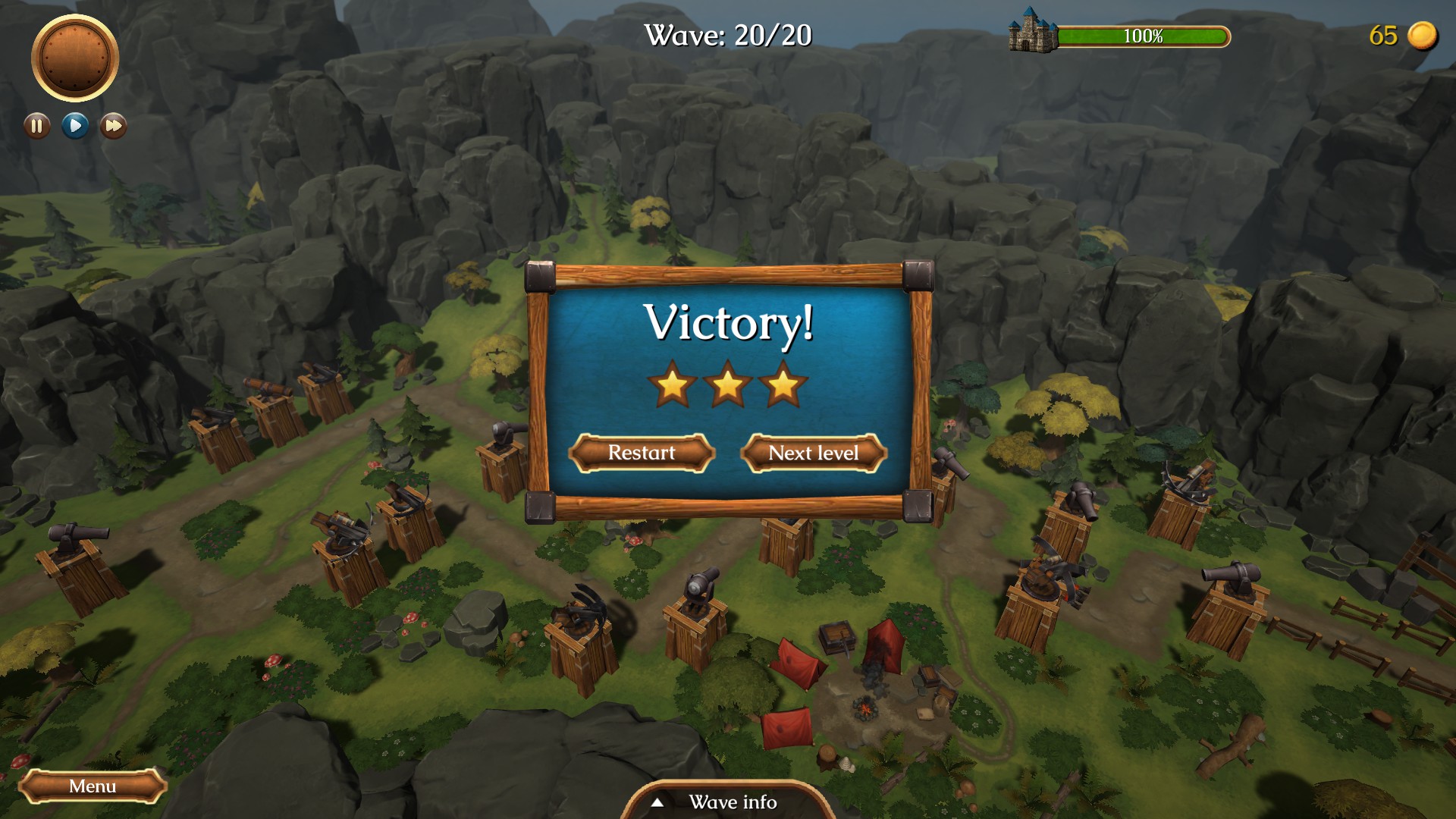 I’m rather disappointed in the short campaign and cheap-shot final battle, and the rather repetitive single-player battle mode. I imagine the game would be more fun multi-player, if you have any friends who play, but with the small range of towers, troops, and upgrades, I just can’t see it having much longevity even then.