It’s just another day at the office. Oh, excuse me while I beat a vacuum cleaner to death with my briefcase. There, much better.

Paper cuts and pencil dart fights aren’t the only deadly things going on at the office, Assault Spy is one of the oddest ideas for a DMC-type game I’ve ever seen. You are a corporate spy with a mission to steal secrets from the famed security company Negabot, but a bad dude named Mr. Showtime has bought the company and now all their robots are out to hurt people. At least, that is what happened the first time I played it. After the newest update I had to replay the game and Mr. Showtime’s introduction was altered and replaced with his secretary. In any case, Negabot security robots have gone all WestWorld on everyone and you’ve got to kill them all with your trusty briefcase and business cards instead of a sword. Yep, not kidding, a briefcase and business cards. It’s like Dante’s long lost cousin twice removed has an office job, and a cool one at that. As for the game itself, it’s Early Access so everything is still rough around the edges, yet the core parts of the game really come off pretty well. 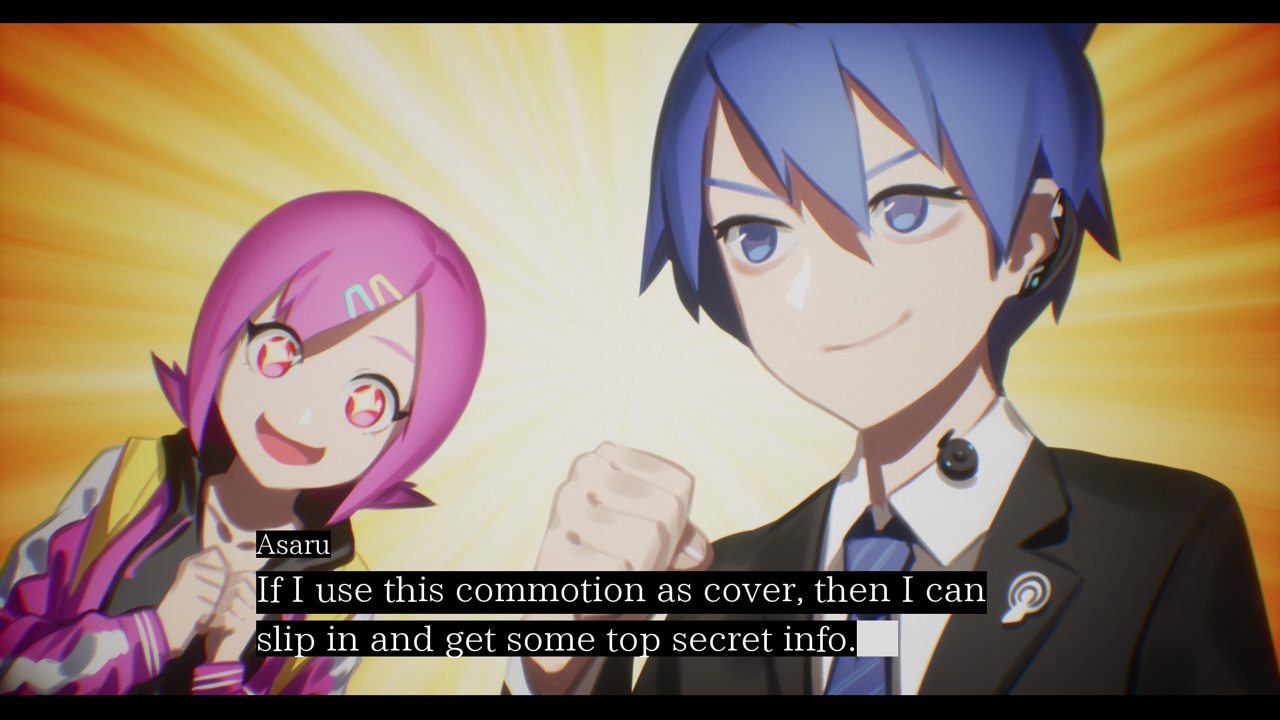 The action is the core component of this game and it takes a lot from DMC, so DMC vets will be quite at home. I do recommend playing this with a controller, as it’s just built for that type of action unless you are adept at using KB&M for action combat. The briefcase has fast and heavy attacks with combos galore. There is also a jump with an unlockable double jump and an evade dash. These are very standard issue DMC controls and they feel good except for a few things. Mostly, although it is a quick paced game, it has some shortcomings. When I am attacking with combos, even though I lock on an enemy my character will sort of spaz out with a combo that doesn’t always connect if I’m just a hair too far in one direction. I think they need to widen the hitbox or something because it happened quite a bit or I’m just comboing way too often. It happened the most with the levels before the diamond robot boss and also during that fight. Additionally, the geometry can often get in the way such as when I am attacking an enemy on top of a box next to a column, my attacks may suddenly leave me frozen by the column until I dash out of it somehow. So, either fix the hitbox or fix the lock-on, because somehow I’m getting combos doing nothing even when I’m locked on and right next to an enemy. 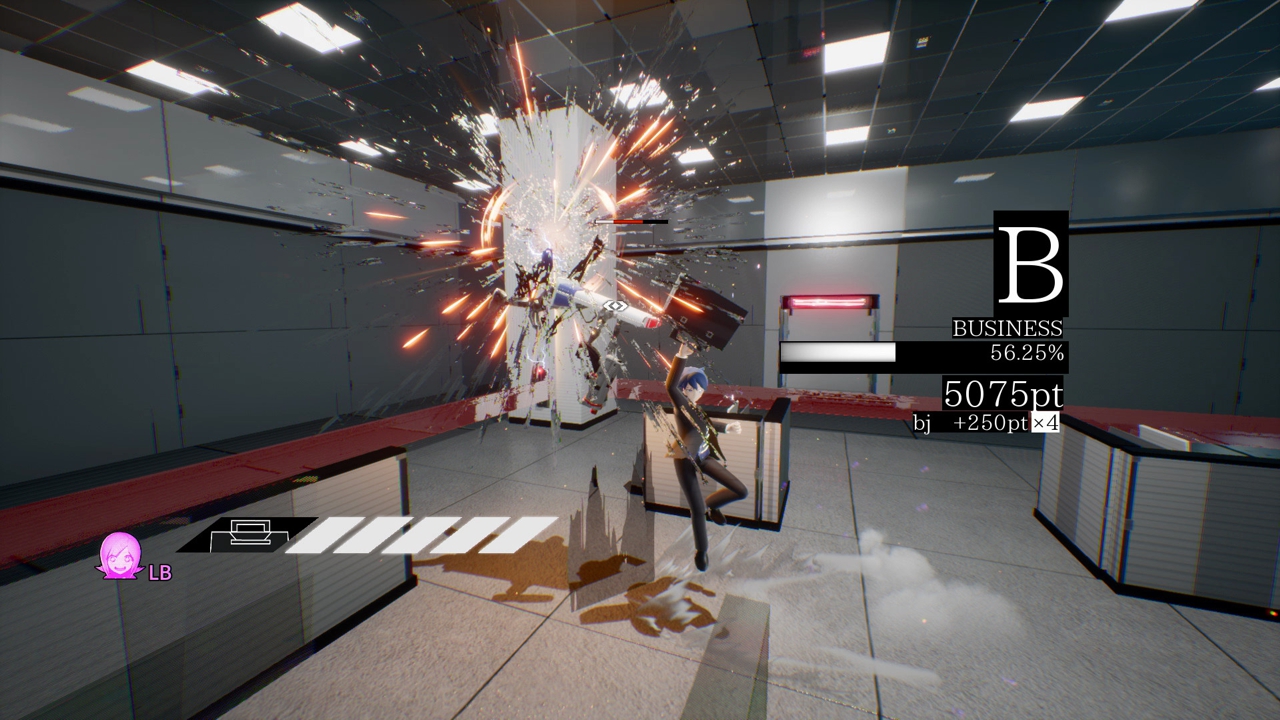 The pacing seems fine, with some good variety for layouts as you progress but just keep in mind that this is a office space environment, so it’s going to look really barren and often like a scene from the Stanley Parable. The basic enemies are very basic for now, so that will need to be addressed although there are harder enemies as you progress through the game such as drones and these weird looking robots that actually evade you. The security bots look a bit like smartphones, but I kind of like that. You’ll also see some of them with both shields and bazookas, which makes it harder to kill, but only because you have to deal with those upgrades they have. My favorite are the automated vacuum cleaners that attack with razor blades. Nothing feels worse than being killed by a vacuum cleaner.

As you play, you can upgrade your combo moves for your body, briefcase, business cards, and Kanoko, as she acts as your co-op buddy for brief periods of time. Kanoko is sort of a weird aspect of the game. I used her all the time, but very seldom did a boss or enemy actually get distracted by her. I wish she had more effect on the gameplay. You can also unlock some new powers during combat, but that will likely evolve as the game develops. 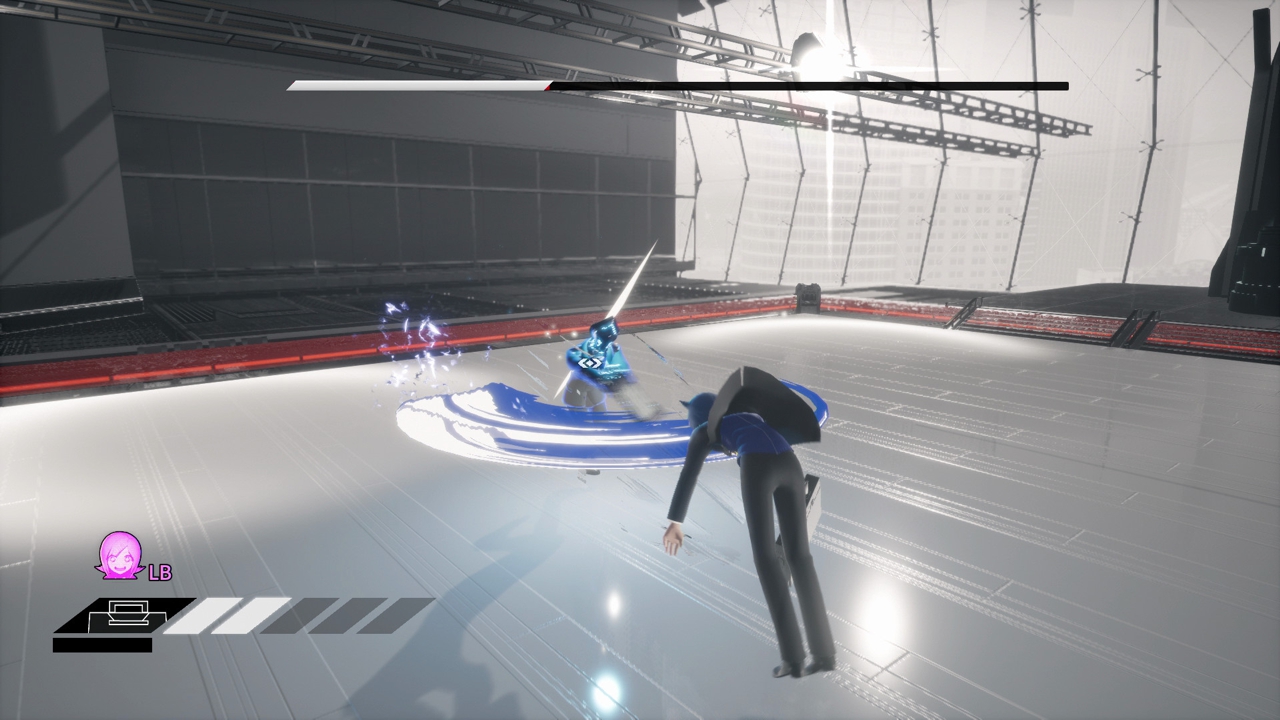 Getting around the office space is a bit hit or miss as it’s an arena style battle with laser fences around them. Make sure not to run into the lasers! You will get damage, but it’s a nice method to knock an enemy backward into a laser and kill them. Glass doors between the cubicles work as a means to block laser guided shots coming from the security bots, but you can smash them and there goes your cover. Jumping is fairly straight forward, yet could use a wee bit more control as I’d often try to jump to a desk and just outright miss unless I jumped and targeted an enemy with a heavy blow. I did find this worked better with an Xbox 360 controller compared to my Steam controller.

The Camera was something I had to fight a bit as it would pan around a little too quickly, making it a somewhat dizzying to play. It’s like it can’t quite decide the angle to view. Sometimes I had to try to pan upwards so I could get a grasp of where the enemies were. It could be really hard to figure out where the enemy was at times, so it would be nice that if you are trying to lock-on to the enemy, the camera should quickly adjust to where you can view them immediately and run over to attack, yet with a wide enough angle so that it doesn’t completely block the rest of the scene. There are markers that illustrate where the enemies are in proximity, and those are helpful, but fine tuning the camera is a must. 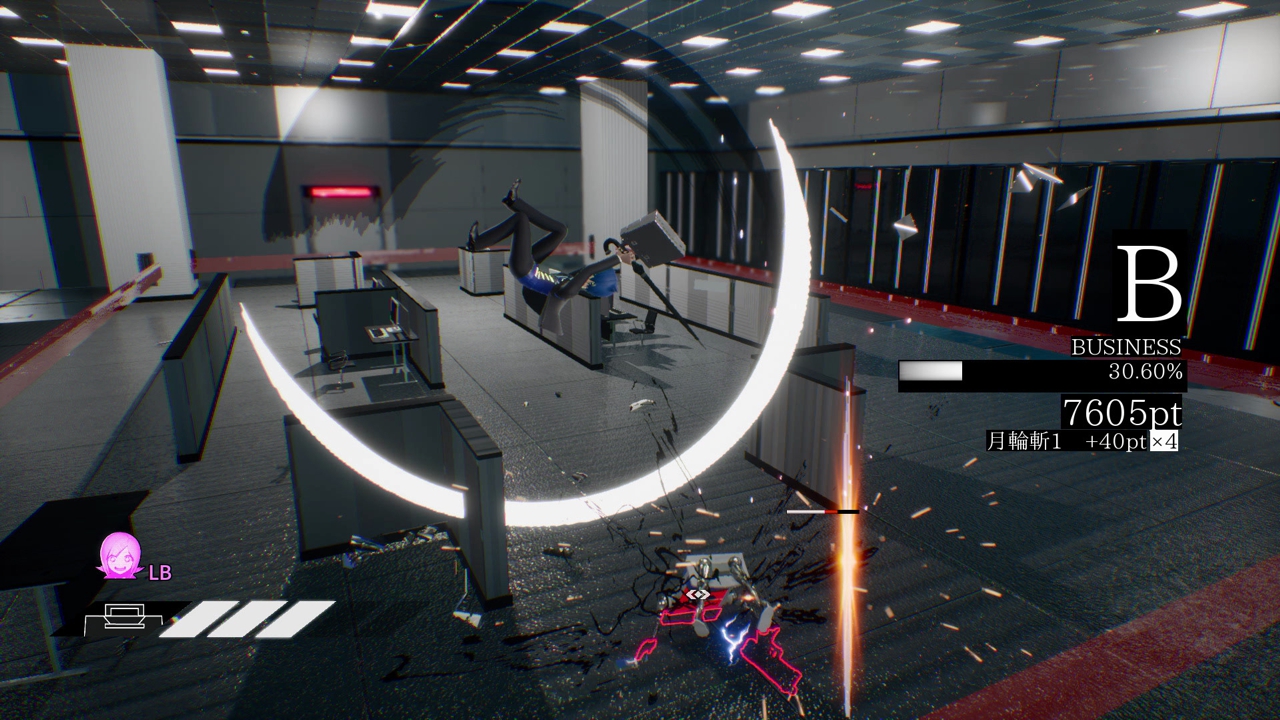 I rather enjoyed the story, but it’s a little jarring at the beginning as you suddenly jump right into the characters interacting without much in the way of knowing what they are doing. The banter is charming and well voiced acted. If you enjoy anime and a sort of visual novel method of telling the story, you’ll enjoy it. It’s nowhere near as verbose as a visual novel, though, so expect moderately short voice-acted scenes with some silly jokes thrown in. I’ll avoid spoilers, but for now assume that you are a failing spy named Asaru who has to prove his worth to his Boss and meets a small cast of characters along the way.

The translations were adequate and I never felt like there were glaring typos or inaccuracies. There was one scene where I thought the jokes fell flat, but otherwise the game’s funny aspects don’t beat you over the head with jokes. You could hear the emotion and subtleties of the voice actors as they spoke. It’s in Japanese, so if you don’t like sub-titles then you may not like that aspect. I do like how you can skip past the story if you want, which is especially nice when re-playing a battle, though a button prompt for this would be nice. 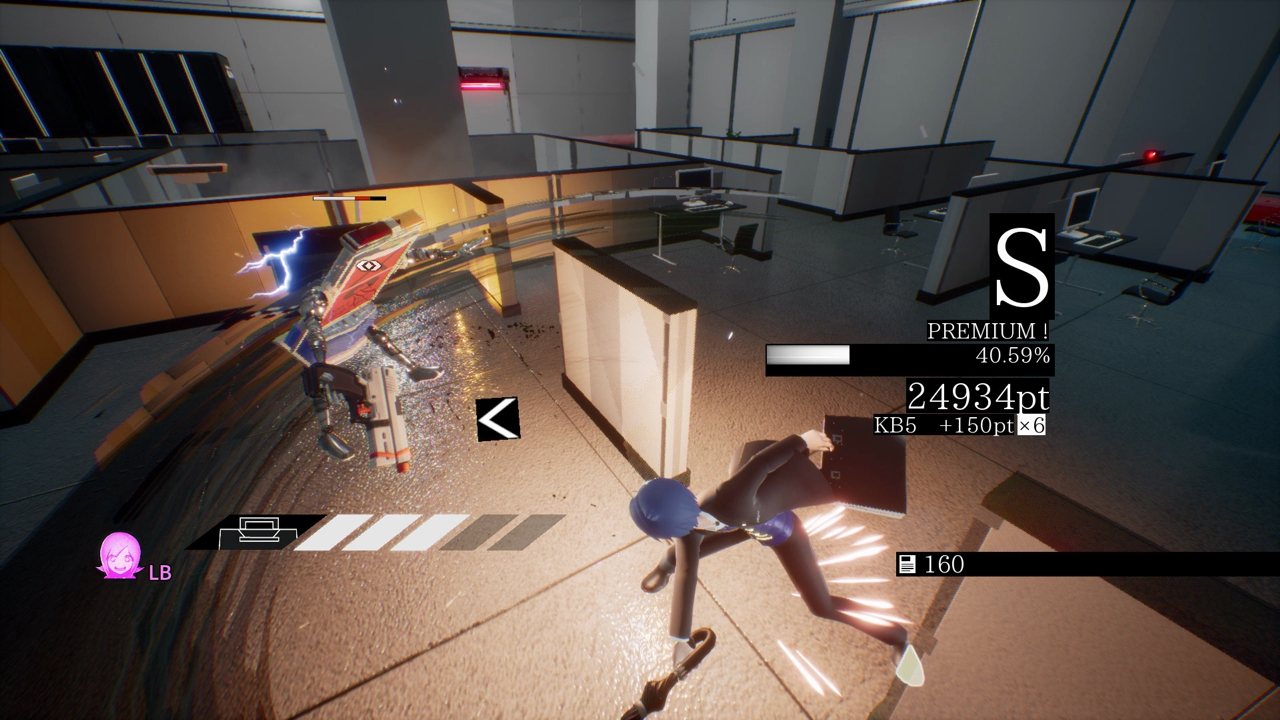 As I mentioned before, the game world is a bit cold and barren due to the environment of an office building. There are some changes later on with trees and underground lots, but don’t expect anything along the lines of a DMC world. What I did see was pleasant and ran smoothly at 60FPS displaying at 1080P on a mid-level PC. It even streamed well with a Steam Link. When battles start, I thought the effects on the movement when dashing look great as well as jumping. Actual attacks have a well defined amount of sparks and action oriented slashing effects, often fairly nice compared to Tekken 7 which I’ve been playing lately. It’s not as fancy, but there is a good deal of explosive emphasis without over-blowing the screen with effects. I think the weirdest bits were just an EA thing such as Kanoko dangling her legs over an invisible box and such. 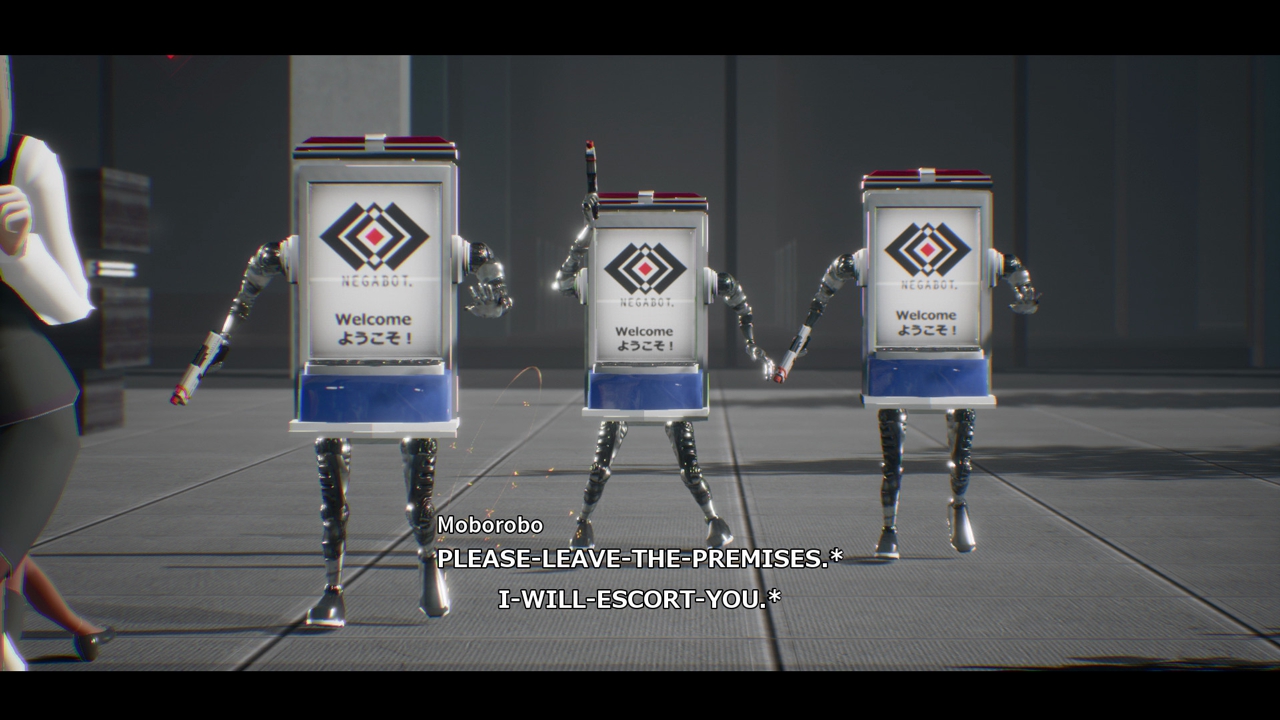 Okay, I wasn’t expecting this to be stable, but the game has crashed multiple times every time I try to play. I say try because I’ve yet to get very far without something bad happening. Sometimes I even begin a level running in place, which can only be avoided by dashing. Here were a few notes from ONE NIGHT of playing:

My biggest gripe with Assault Spy was the lack of information on new abilities or items. For example, when the stopwatch shows up there is a tiny LT to show how to use it with a controller and there is no explanation that it can be recharged or even how to effectively use it. You have no idea how long I went before I knew it could be recharged. Also, there was an umbrella and then nothing showing what to do with it or how to use it. It just showed up and that was that. What is needed is to freeze the screen, give some quick illustrated lesson on how to use the new ability/item and then a way to unpause it after learning how to use it. That is sorely missing. 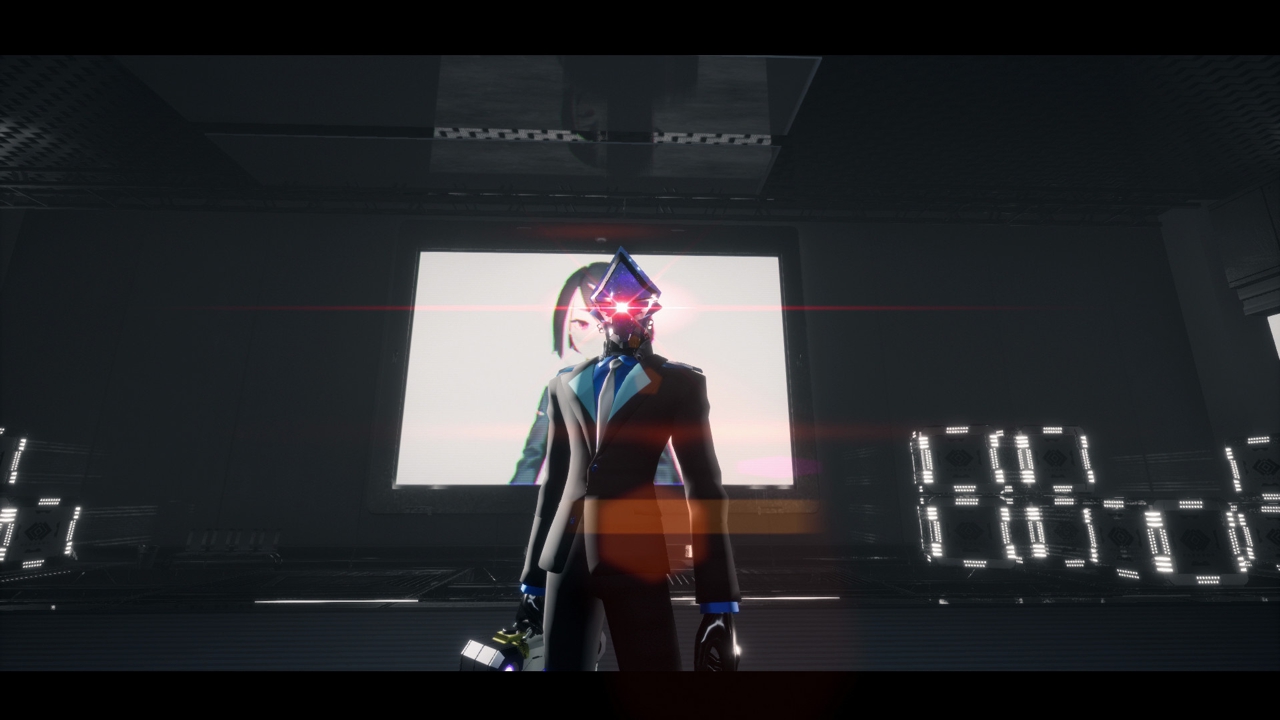 For an Early Access title, Assault Spy shows a ton of promise. While it’s still a buggy mess, I at least enjoyed the quick fighting style and general feel of combat. The premise is rather silly, fighting with a briefcase, and the game treats it with tongue in cheek comedy, but I think it’s a good little niche of an idea for DMC fans. Keep an eye on it when it finally releases. There should be another storyline with a female CIA agent who uses a gun and I’m looking forward to it as that should double the content it currently has.