We only have books here. Totally don’t have secret spy stuff hahaha

If you can’t become a spy, why not be the one that manages them and keep the safe house in top notch condition? Just keep the funding up, re-purpose empty rooms, train recruits, and help with some tasks here and there. Easy peasy. Did you find yourself in the middle of a political conflict in Kazataire to take down their leader? Well, what did you call me in for other than success!

When you first start out, you only have three pre-built rooms with all the others empty and gathering dust. As you get started, you find out that one is your office and the other two hold “tasks” that allow you to earn money if you succeed at it. You’ll also have goals to complete before you can progress in the story mode, which revolves around you having enough money for the most part. These goals can either be buying a room a room you need or have you complete a mission where you have to hire someone to work for you. So, what happens if you fail a task? Failing a task will take away the money you have in the bank, put it in the enemy’s hands, and get you closer to receiving a penalty (which can be less money from tasks, for example). If you don’t want set backs, it’s best to not fail the tasks as otherwise it will take longer to complete a goal, especially in the beginning when the tasks reward little money. 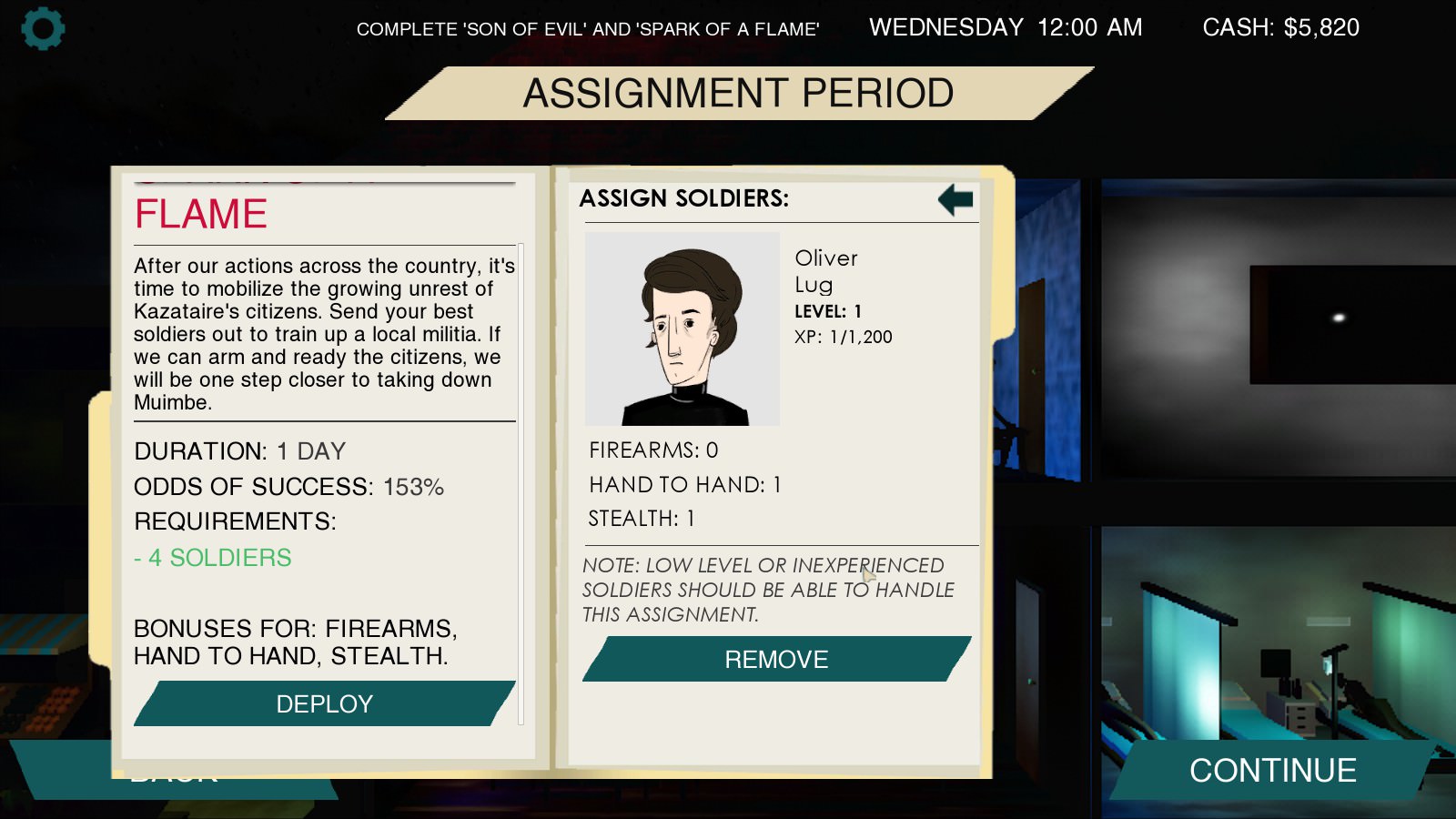 Once you’re ready to construct your first room, you’ll be introduced to the different phases: construction, assignment, and regular tasking hours. Construction lets you build a room you don’t have in an empty room or upgrade an existing room. Though upgrading rooms, and by extension the rooms that only give a small boost, doesn’t seem worth it when comparing the cost for the low boost it gives. Once you build the Spy Lounge and Black Ops Barracks, the assignment phase can be used as you can recruit agents (costing money of course), upgrade their skills once they level up, and assign them to missions. You’ll have story related missions and side missions that you don’t have to do but will help level them up. However, despite being told to train your recruits with the side missions, you will only get that one paired with the story related mission. So if you fail the side mission, you lost your only chance to level up a recruit before the story mission. All you can do is keep trying the story mission hoping the low chance of success percentage works in your favor or keep doing it till it becomes a more favorable one by itself. There are also blank mission buttons that show up occasionally that do nothing, which can be what the system should be doing with the side missions, but I’m not sure. 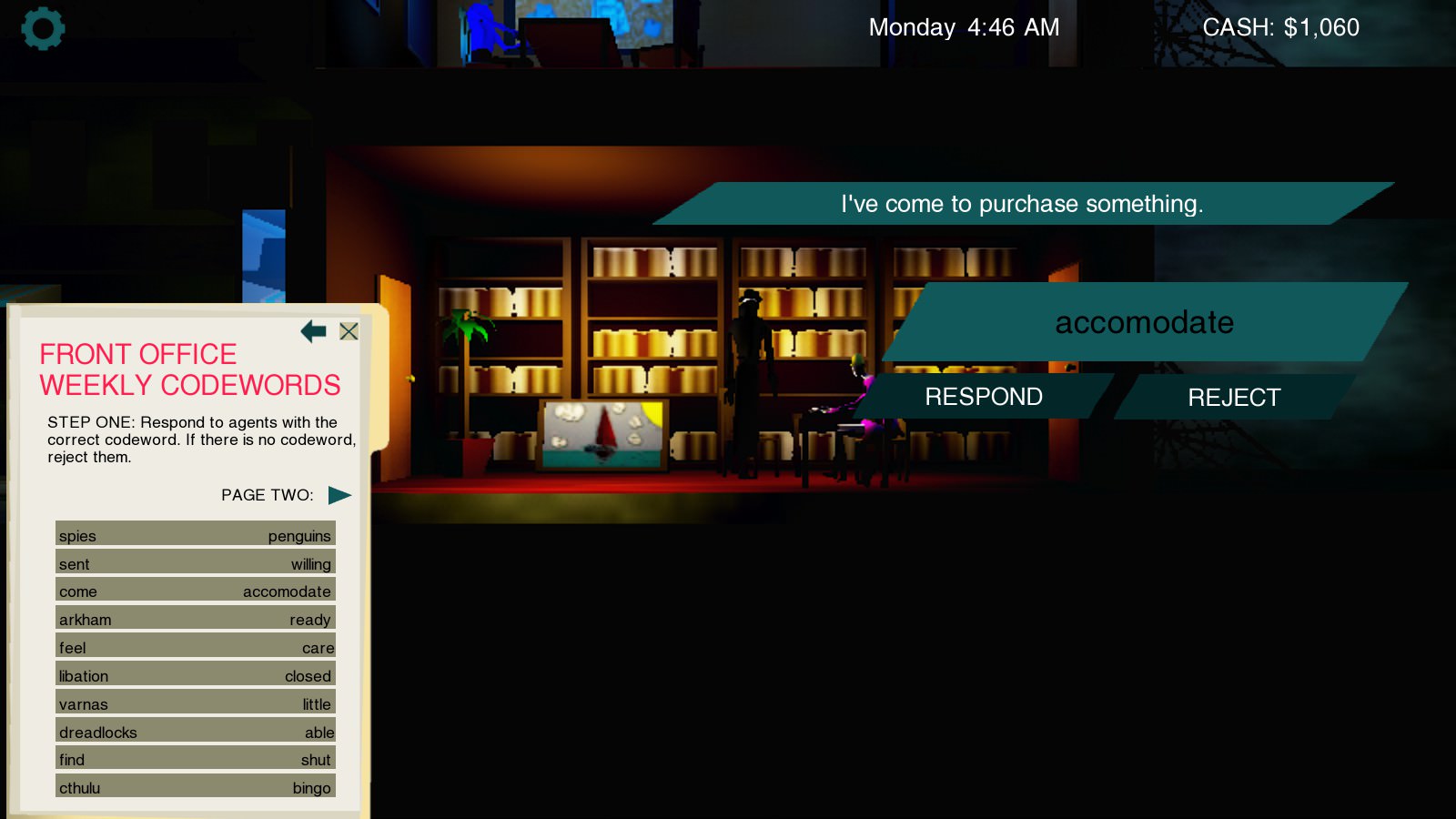 Lastly, and most importantly, is the time you’ll be doing your tasks. You just have to wait till a room gets a task, signaled by the room being highlighted, click on it and the task will be displayed on the screen. Depending on which room it is, the amount of time spent can vary. You can get tasks that are generally quick and easy: checking if a label matches up with what’s on the list (Loading Bay), checking if a name is on a list of people to question (Interrogation Room), or a spy said an acceptable code word in which you say one back and see if they respond with the right one (Front Office). You can also get ones that take more time: unscrambling a phrase by figuring out if you need to go up or down a certain amount on the alphabet (Cryptology), forge a passport (Forgery), make sure you give an agent the right blood bag and medicine for their ailment that they are not allergic to (Infirmary), or making three bombs that go along with the requirements (Bomb Workshop). What makes some of these harder is that many ingredients, codes, or words will be spelled almost similarly (e.g. Hemolene and Hemolyne). All the items you need to know plus how to work with them is explained in your dossier (or cheat sheet). Since there are tasks in which the list changes daily, make sure to use it all throughout, though it does seem weird that only one task is available with the next one taking a while for it to show up (you can even sit on a task for a whole day and it won’t progress till you do it). 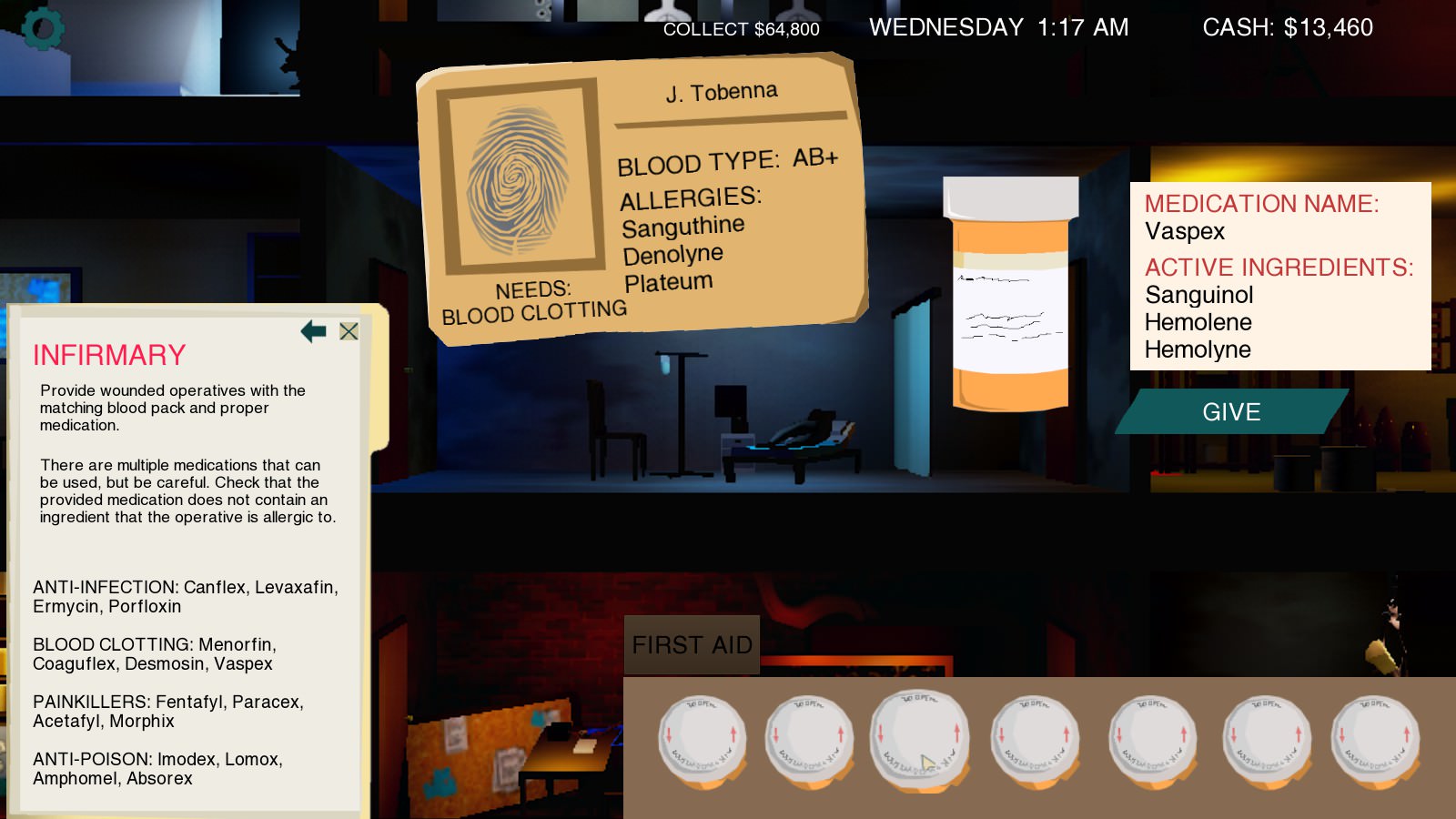 I do wish that all the rooms you can build would have some kind of task tied to them. It seems pretty weird that you don’t have any tasks that would pop up for missions that could perhaps increase their chances of succeeding rather than only having a percentage to go off of. This could also be added to the extra two rooms that would house the boost rooms, giving it a task that is related and succeeding would keep it running, and thus give you the boost (like making propaganda for the Propaganda Office).

Along with that, the camera needs to be looked at as well. When you click on a room to do its task, it zooms in but it doesn’t zoom all the way out when finished. This makes you zoom out and possibly scroll to the side every time. It would be nice if it either zoomed out all the way and centered when you get out of the task itself or gave you a choice whether or not you want the game to zoom into rooms when you act.

With multiple phases, I do wish there was a way to test new rooms out even if you can only do it once. That way you don’t waste a whole day or money trying to figure it out to do a task correctly. Another idea would be a window that shows up for all the rooms on how to do that room’s task when first building it. Weirdly enough, you do get a rundown of the first three rooms when you initially build them but not for the others. If those rooms were explained like that, then all of them should.

There is also the problem with the interface that deals with all the mouse interactions and the shortcut to open the cheat sheet. When I first started, the shortcut did nothing and double clicking was the only way to get the room’s task to activate. After a couple of sessions, the shortcut finally did work and single clicks finally registered, however sometime that did work. It’s a toss up whether a single click will register or not, so I (and I’m sure many) will just double click as that trust is gone. If you’re really unlucky, the room will register the first click and the second click will click a button to reject/accept a code, making you fail the task without it even showing. The shortcut to open the cheat sheet also seems to not work on the first day, but works afterwards, despite being told that it should. 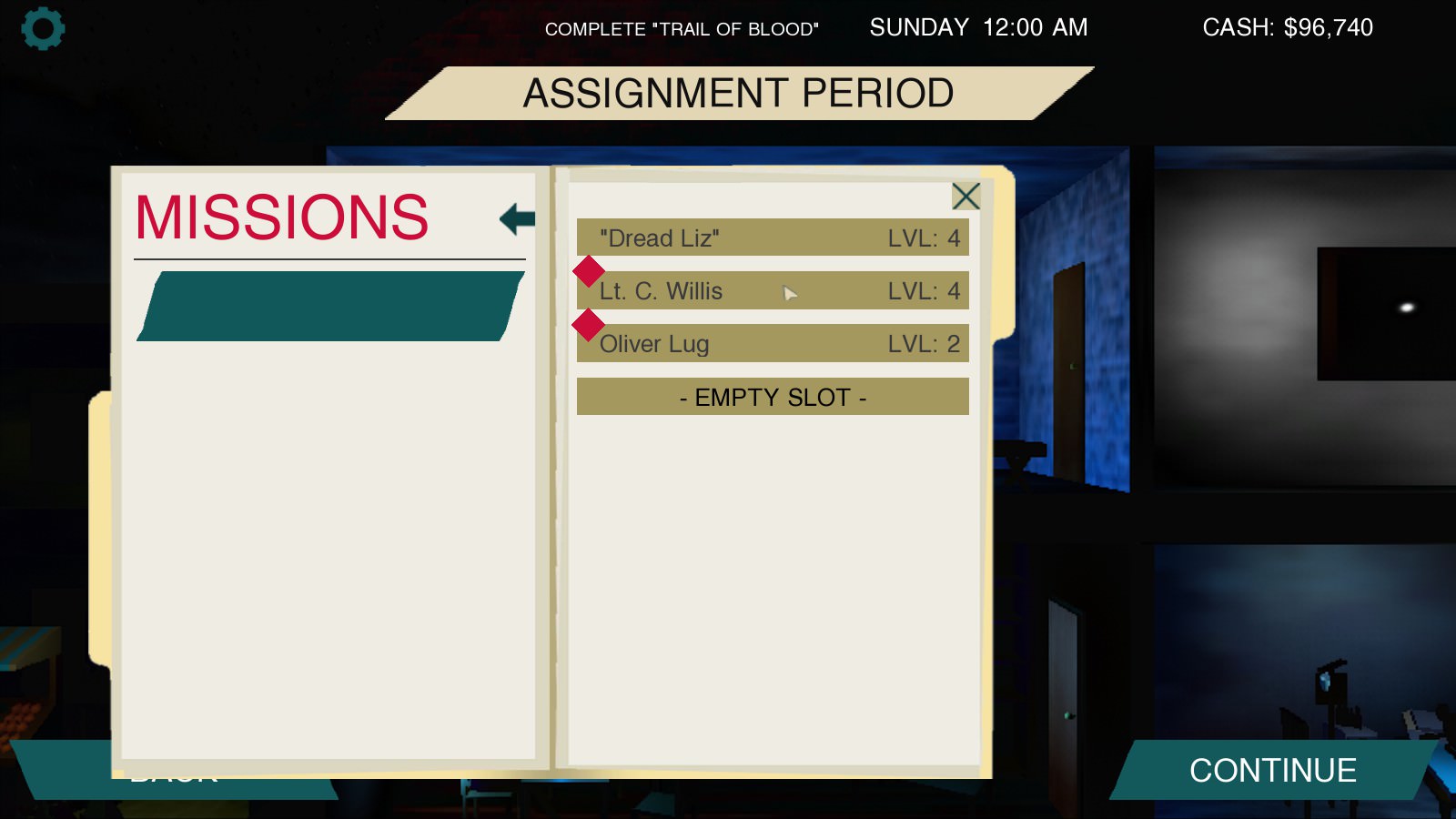 Sadly, that is not all in the buggy department. I also had an occasional bug with the submit button in the Bomb Workshop where it would not work. Thus, forcing me to either take the penalty as this is the only task you can abandon midway or start the day over. The last bug I encountered a lot is regarding the spies and soldiers. I constantly had trouble with the button to upgrade a skill to actually register and had to go for another skill or, at worst, not be able to register for any of them. I also noticed occasionally that a skill would have 0 points in it despite each spy and soldier starting out with 1 in each.

I didn’t delve much into endless mode, going through story mode multiple times to get all three endings was enough for me, but if you want more Safe House you can go there. From the looks of it, you start out just like you would in Story Mode with the first three rooms pre-placed, just without the story popping up.

Safe House really teeters between a game that I would recommend and a game I wouldn’t. It’s a decent task manager game, but the foundation is a little rocky and needs to be roughed out. If all the bugs are dealt with, more improvements were made, and more variety put in Safe House can be a better game. Hopefully more updates are being planned but for now, pick this up only if you can deal with the shortcomings.