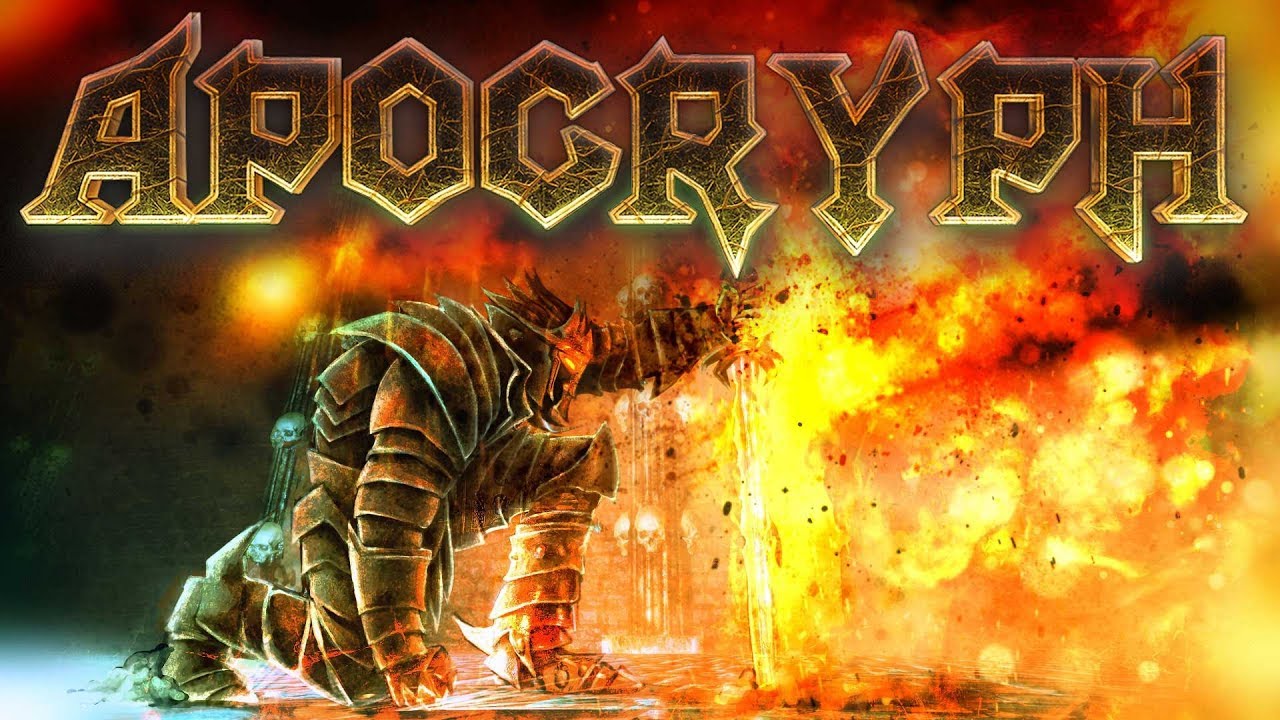 If Painkiller and Hexen sound like honey to your ears, maybe you will be interested in what Apocryph is trying to achieve.

We are currently living through a generous revival of old-school FPS games inspired by classics like Doom and Quake. Apocryph and its gothic visuals remind me of Painkiller, but with magic weapons like Hexen. Usually, wands don’t convey the power of gunshots very effectively, but let’s see what we have here.

I will start with Apocryph’s original and most interesting feature, there is a box to tick in the options menu and voilà, the graphics are all pixelated. Looks like a 300×400 resolution, and the rendering is true to what old-school was like back when computers were potatoes. I must admit though; this effect was painful to the eyes with all the flickering, and I preferred how Devil Daggers, Dusk and Amid Evil looked retro with a resolution from the 21st century. Apocryph goes even farther with the ability to fracture the animations. It means that only some of the frames are visible, not the whole movements, and the resulting effect is as if 3D models had become 2D sprites. Pretty cool, although in a way it can be a shame because Apocryph has surprisingly good visuals for an indie game. It’s not Far Cry or Battlefield, but there is a chunky amount of gore and dead enemies sometimes seem to lose their skin and leave behind their fleshy skinned remains. Tasty! 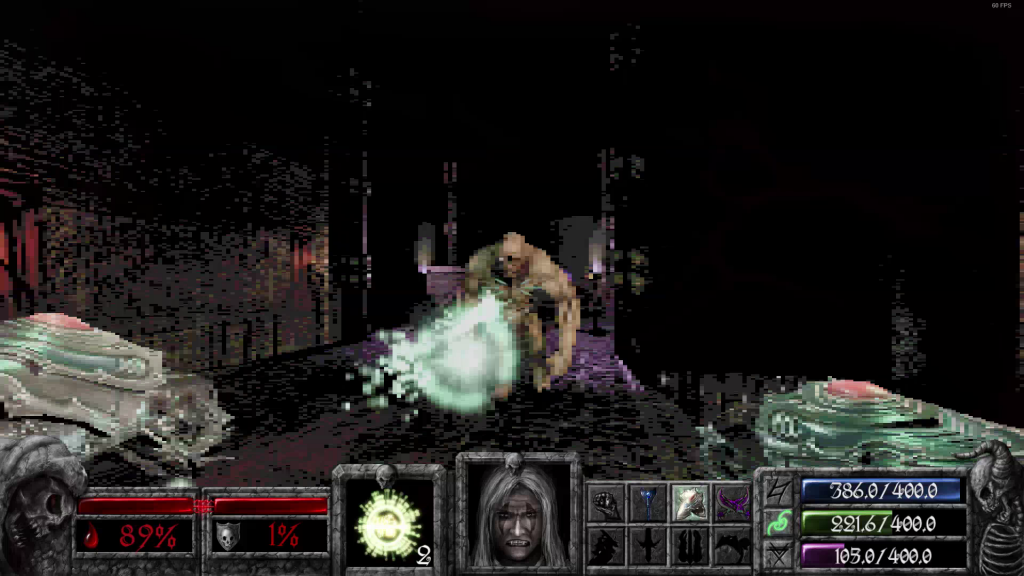 Don’t bring a wand to a gunfight

Combat in Apocryph is not very good. The problem is, gunfights are the heart of this genre of games, and if the foundation is not good then the rest falls like a pile of cards. I will start with melee combat since the game made a point of only giving the first weapon after a few fights. Punching seems to sway the screen left and right, and there was no setting in the options menu to prevent motion sickness (as a note, the FOV can be changed). 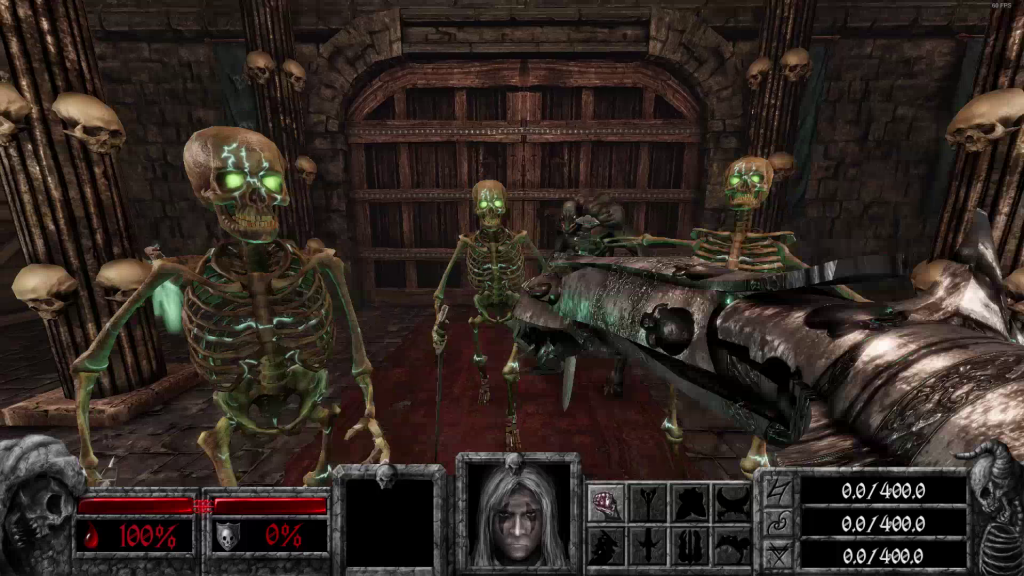 Then there are the enemies. Their projectiles are fast and hard to dodge, deal too much damage, and are hard to avoid in all these tight corridors as movements are too slow. It’s a recipe for disaster. Before someone points out that there are hitscan enemies in Doom who can instantly shoot at the player, those enemies are usually small fry and the priority target to dispatch within a few seconds while dodging slow projectiles from bigger enemies. In Apocryph, the player’s weapons don’t kill very quickly. And they shoot projectiles which are not as fast as bullets, thanks to being magic wands. Harry Potter versus an M16? He would be dead before uttering the end of his incantation. Well here, the wands shoot some harmless fireworks, it’s not focused enough to be dangerous from a distance and the enemies do not stagger enough when shot to help manage crowd control. 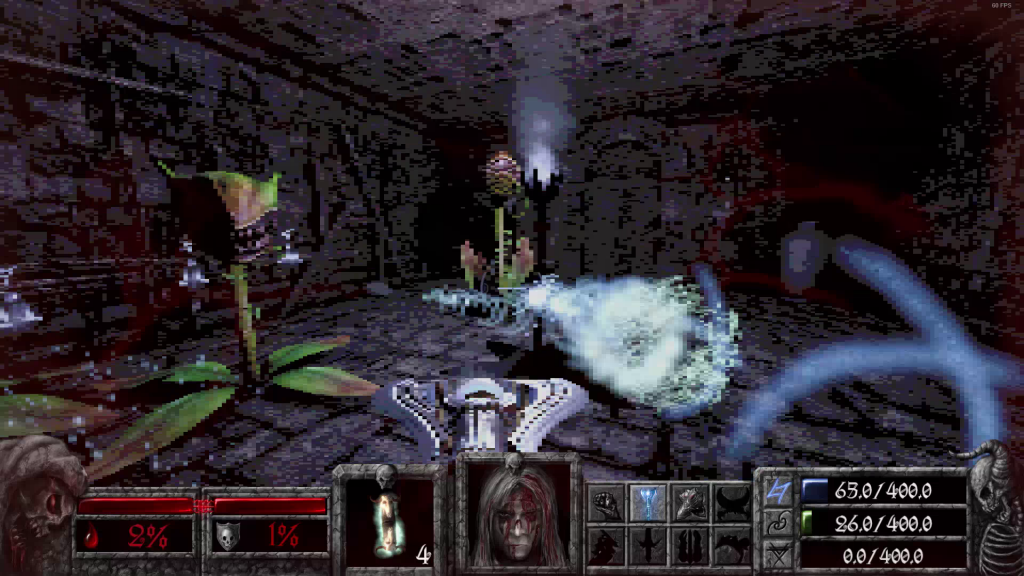 It’s not my jam

Level design is inspired by old-school shooters with keys to find, but the layout of the levels is not very clear and I sometimes had to try multiple paths with locked doors after walking for a while until I could find the right location, which hinders the flow with too much backtracking. Doom and Quake had a better sense of subtly pushing the player in the right direction. Sometimes, there are arenas and waves of enemies to spice things up. They do a good job of surprising the player, and it might be necessary to use the slow-motion power to survive. Slow-motion makes everything red and hard to see. The same occurs whenever the player gets hit, too much jam on the screen hinders visibility. 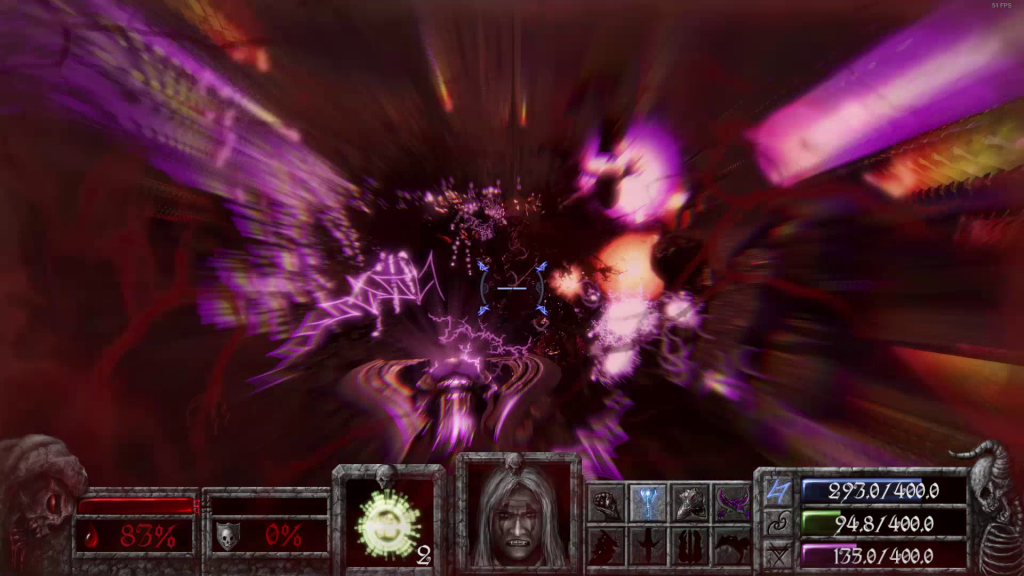 Apocryph is an honest attempt at an old-school FPS game, but despite its great effort on the graphics the combat falls short and I did not take pleasure in clearing its levels. At least it is rightfully faithful to its old-school roots, and there are a lot of enemies to kill.