Dive naked into the Exiled Lands. Chop up your own dead body and eat it, then beat on your enemies with your own severed leg.

You play a poor wretch who has been cast out from civilisation to the Exiled Lands, left to die naked and alone, hanging on your crucifix. With your last moments ebbing away, Conan himself appears before you and cuts you down from the “corpse tree”, giving you some water and a few harsh words of advice. With the bracelet on your wrist marking you as an exile you have no choice but to venture into the forbidding desert before you, and try to survive as long as you can. 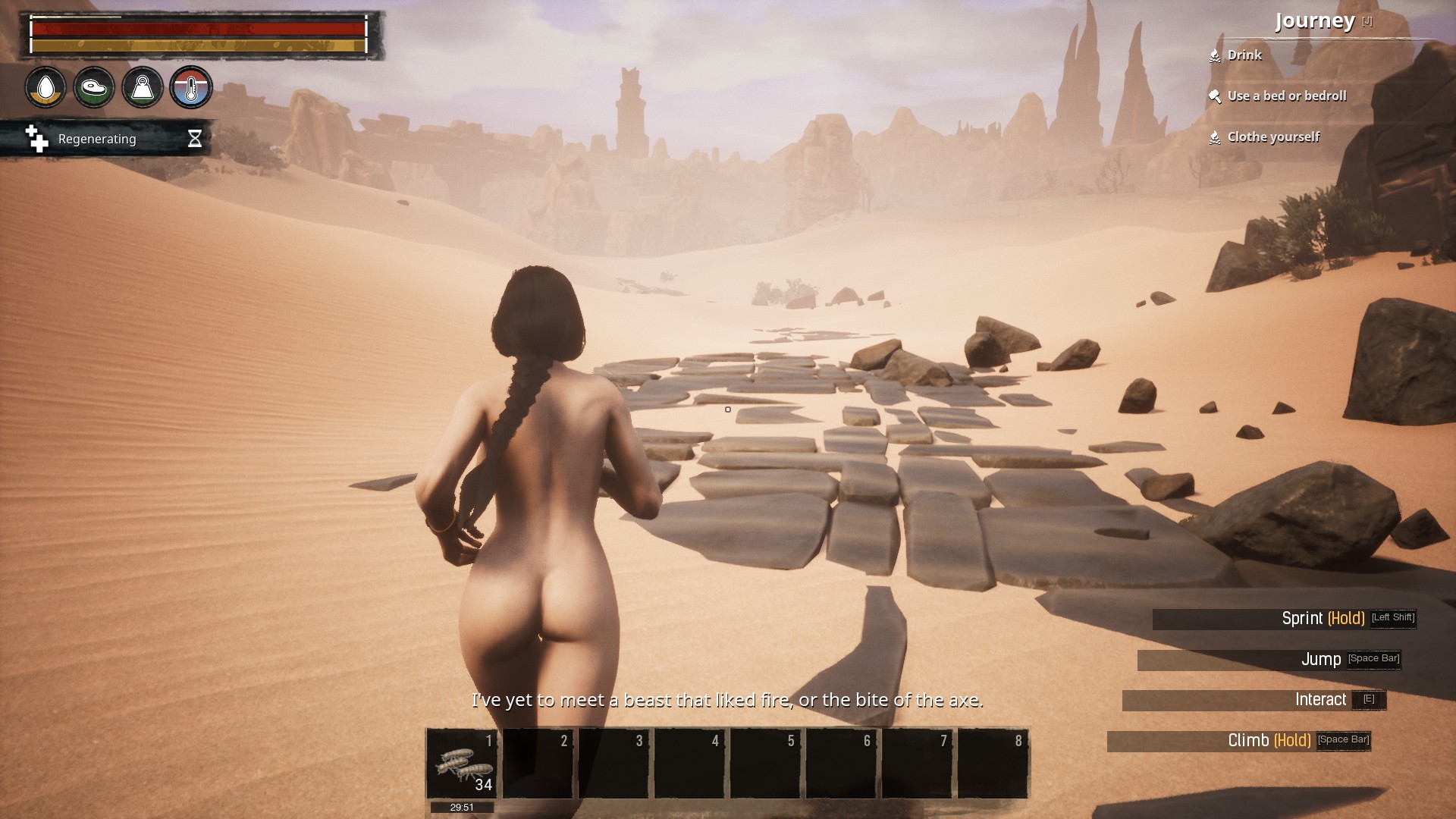 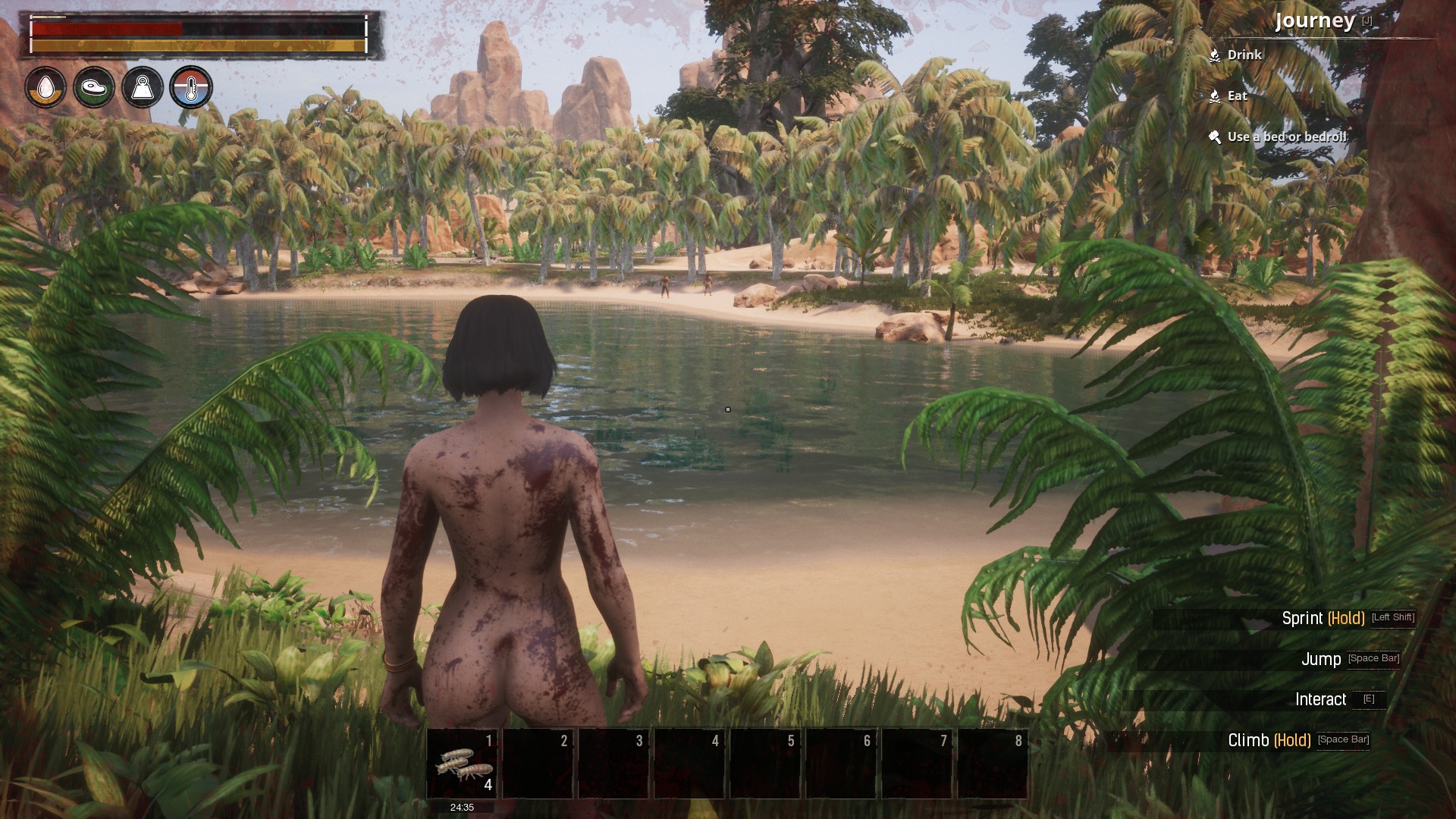 Character models and textures are beautiful. Non-humans look and move very well, too, with all manner of scary and not-so-scary creatures to encounter. The game world features different biomes that, from what I’ve seen so far, blend convincingly into each other, and the atmosphere of each one is spot on. By default the game is played from a freely rotatable and zoomable third-person camera, but you can use a first-person view in most cases instead. Combat is suitably gory for the setting.

The character creator gives you a reasonable range of choices for creating your character — including no, partial (topless), or full nudity — and it’s hard to make an ugly or unnatural-looking character. It’s a shame there aren’t more options — striking hair colours, tattoos, body hair shaping, etc. — and also there’s no way to manually zoom or rotate the camera during character creation, making for a bit of guesswork at times. But you can adjust breast and penis size across a large range, so there’s that! But while a willy wobbles about with great enthusiasm, there’s only relatively limited breast jiggle, which I’m embarrassed to say I found slightly disappointing. (This is adjustable using a number of Steam Workshop mods. Yay!) 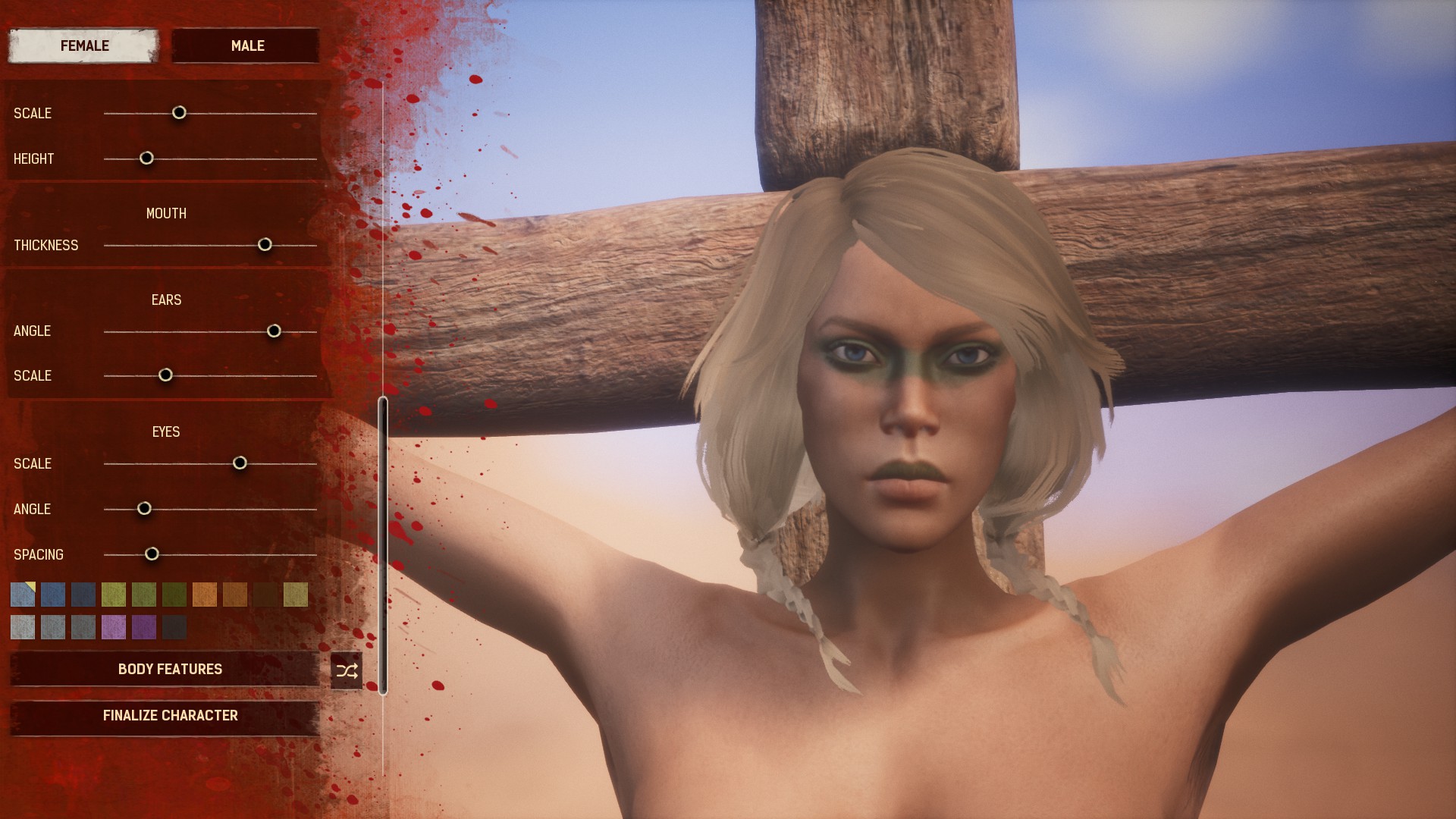 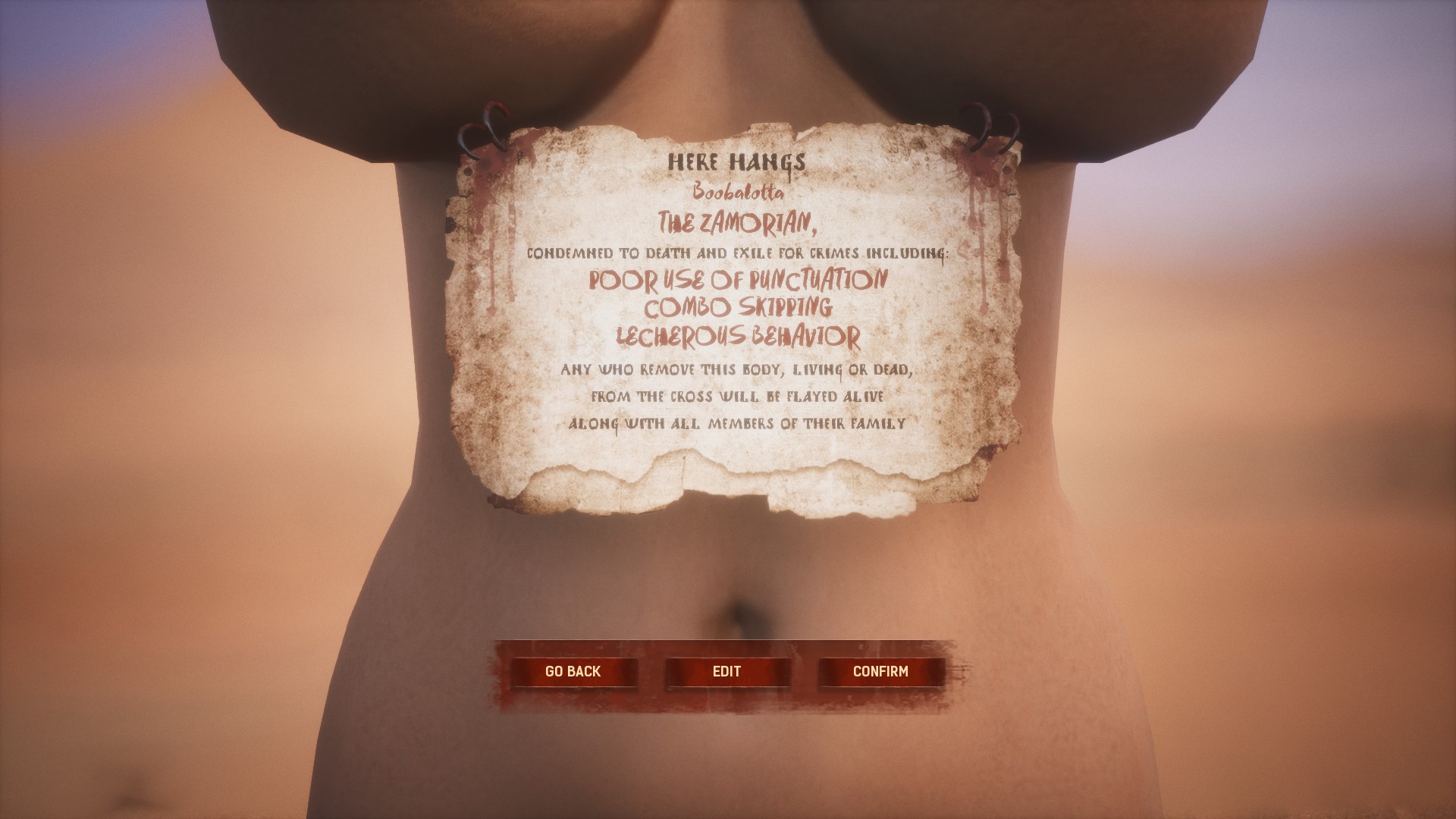 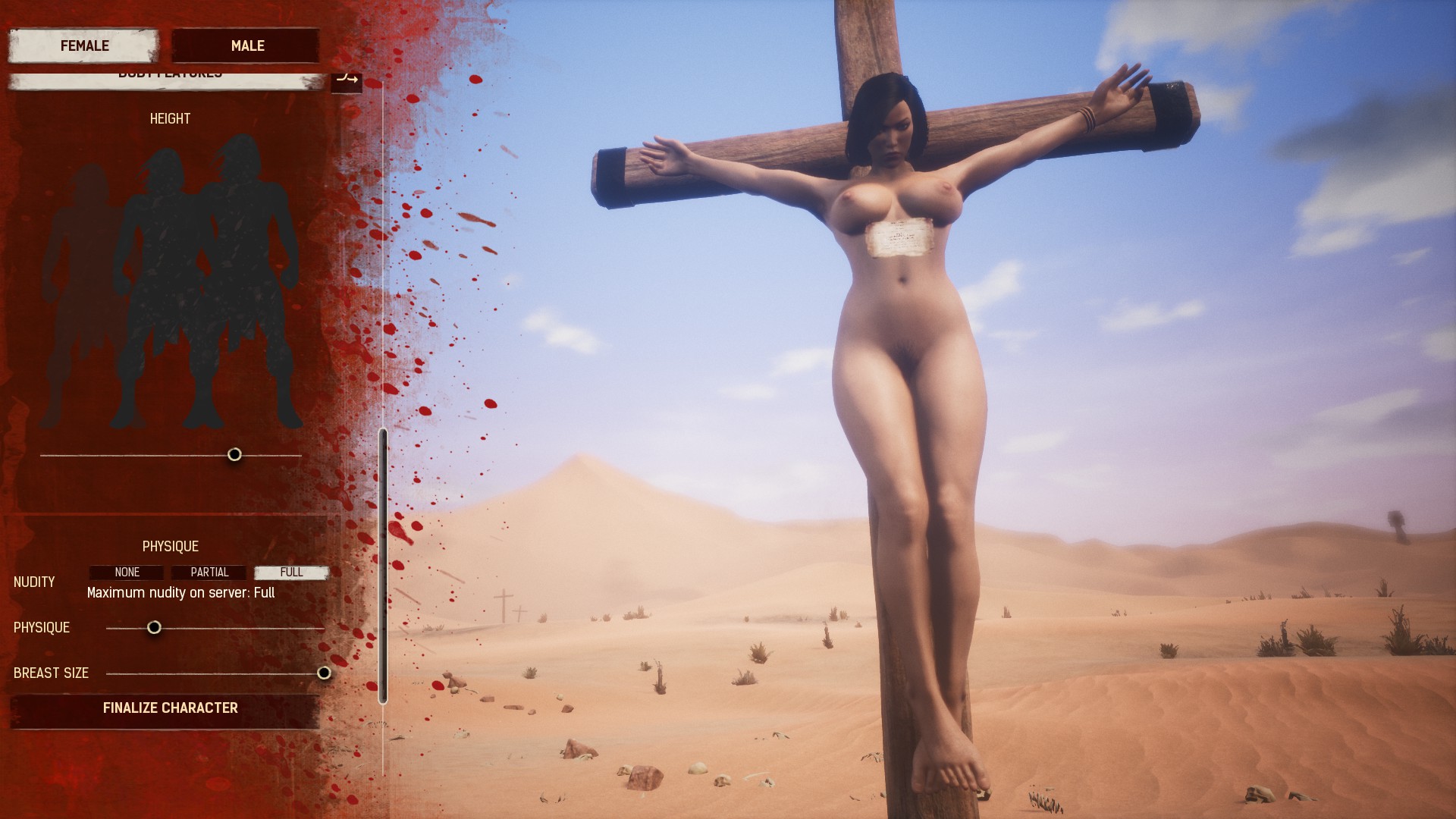 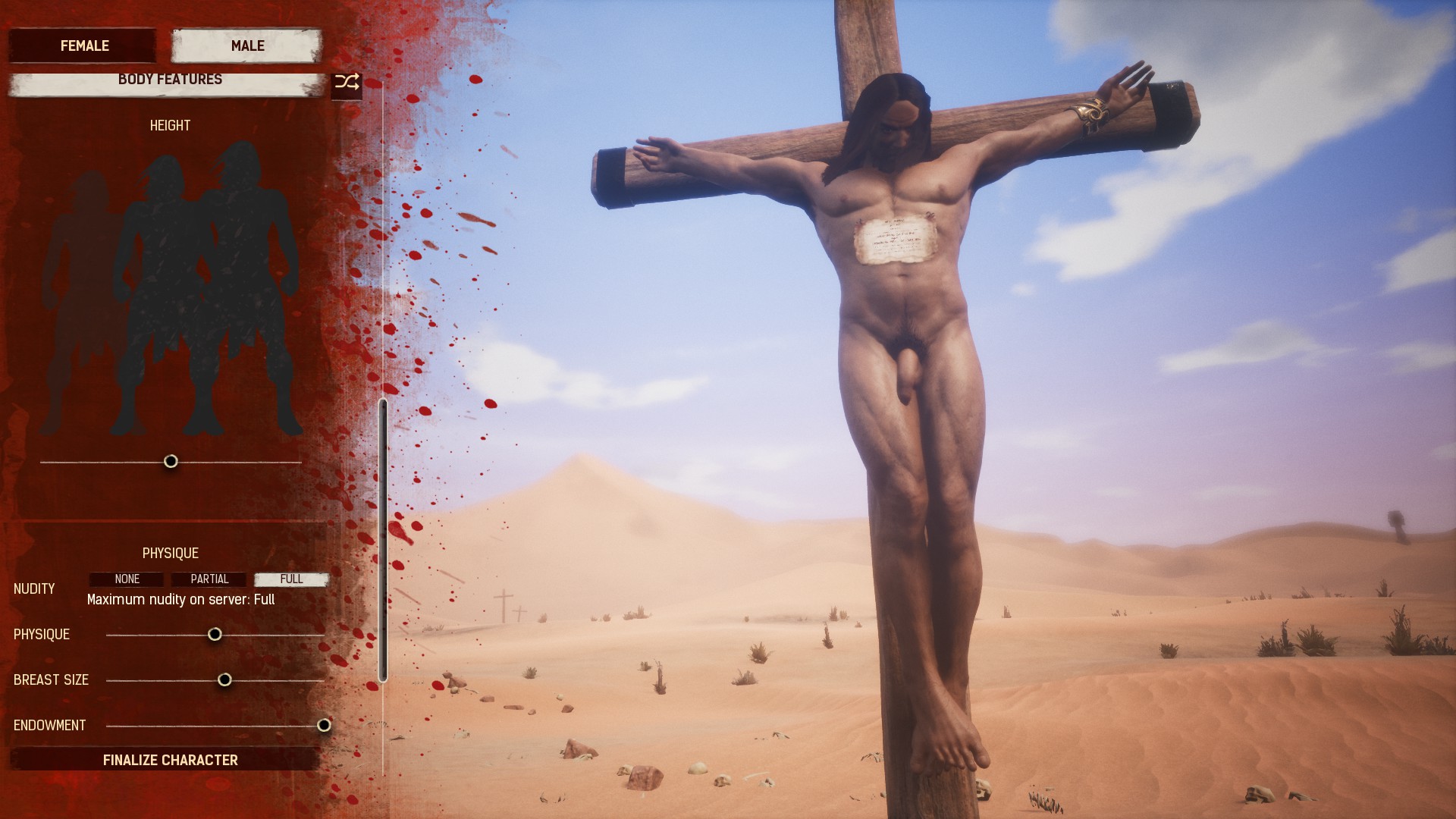 Given the attention to detail, it’s odd that some of the character animations — jumping in particular — are poorly blended and look so rigid, while others, such as the female character’s run or sensual hip-wiggling walk, or the attack animations, are near perfect. The draw distance is a little limiting, too; even on a bright, clear day, everything in the middle distance and beyond looks increasingly hazy and fog typically obscures the details of all but the largest distant terrain features. Given the range and field of view, and the only very limited pop-in of objects, though, it’s an understandable trade-off. There are a few other very minor graphical issues, such as some weird glowing effects around dawn and dusk that look a bit unnatural, and a number of clipping issues (particularly with hair and breasts).

The interface is simple, intuitive, and mostly works very well.

Sound, music, and voice acting are all excellent as well. The soundtrack is what you’d expect from an AAA title with a big fantasy setting, all orchestral drama and explorative melodies, while sound effects are perfectly normalised and fit the game to a tee. Voice acting is enthusiastic and professional.

There’s a bevy of graphical settings, too. I play with everything at maximum on my GTX 1070 and it rarely skips a beat. It does run a little warm on occasion, though. 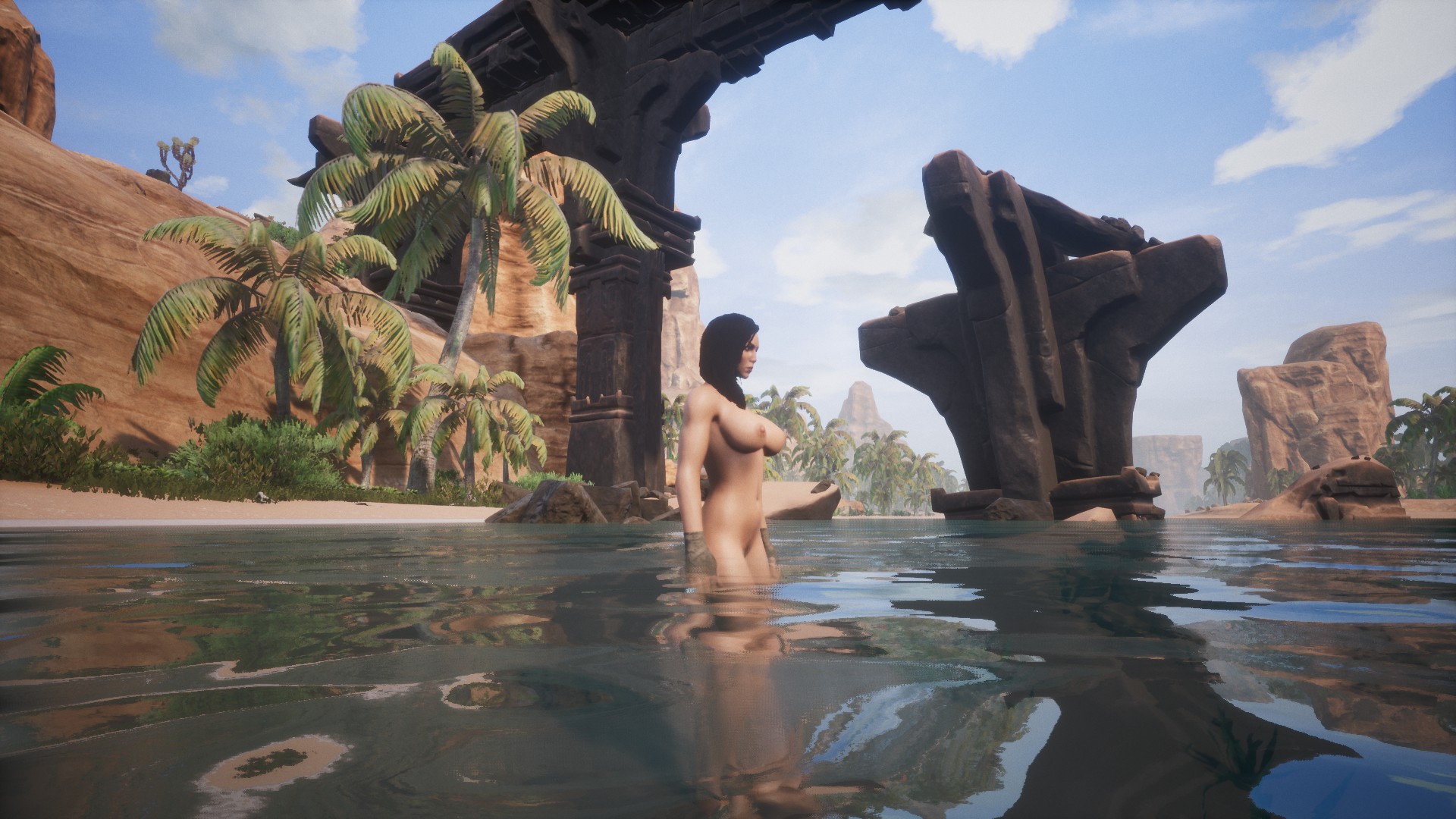 If you’ve played any recent survival-crafting game then you’ll be familiar with the basics of Conan. You need food and water for survival, but these can be acquired without too much effort. The world is inhabited by nasty people and creatures, though, and most are hostile towards a naked newcomer, so you must craft clothing, armour, weapons, and infrastructure to advance. Basic resources are include plants, wood, stone, iron, hide, and a number of more exotic substances, such as demon’s blood or soul essence, the latter of which you can use in prayers to your chosen god. 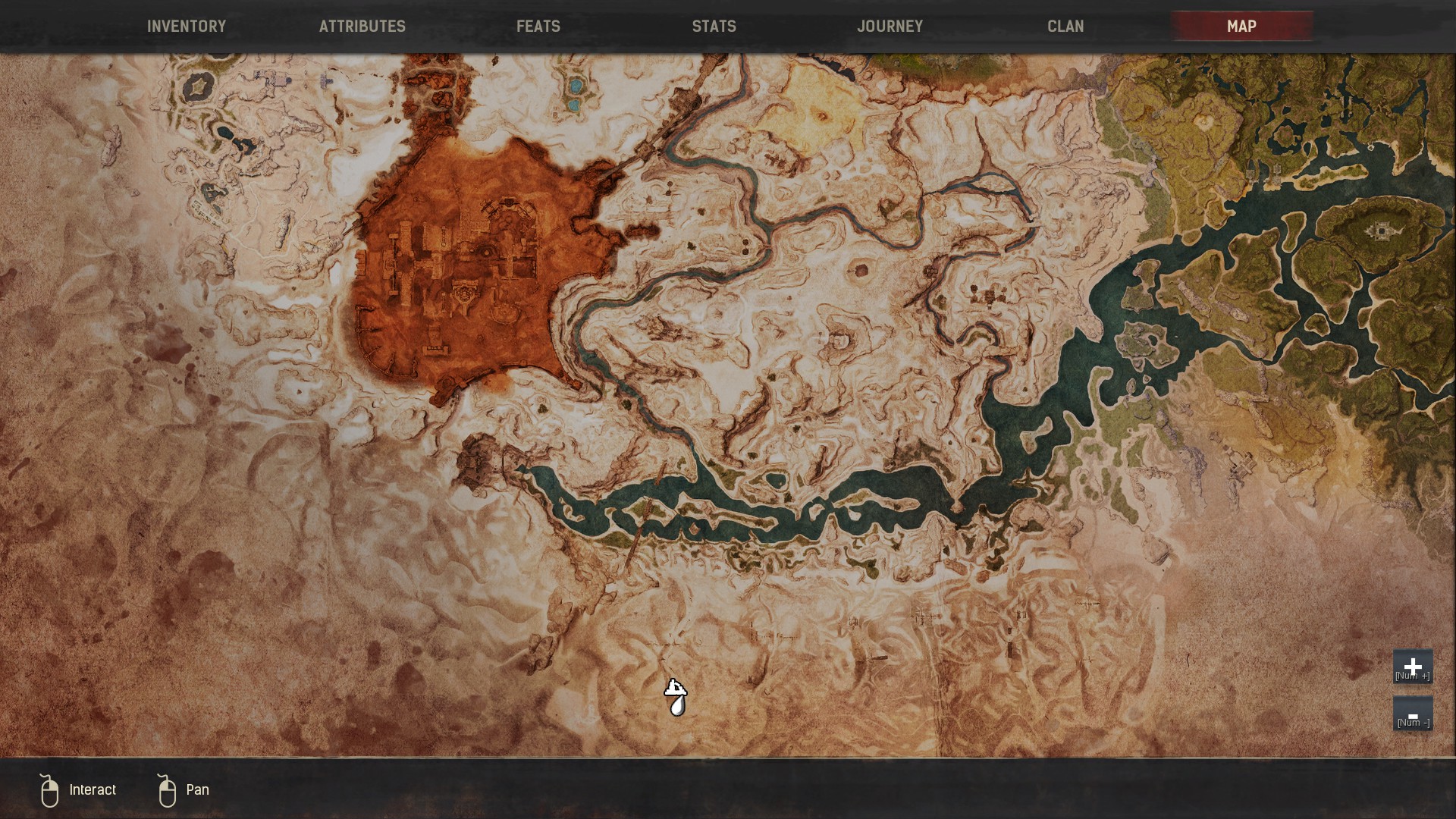 Building and crafting are core concepts, implemented with typical gameplay mechanics: build low-tier tools to harvest basic resources and combine these to make blocks for building structures and higher-tier tools for creating higher-tier resources. It’s all pretty standard stuff, but there’s a huge number of recipes unlocked with points earned each time you level up, allowing you to control how your character develops and what to create. Unfortunately, the feat screen only shows you what recipes are available; to find out what resources are required you have to purchase the feats first, and to find out what an item actually does, you have to craft it. It’s a bit of a disappointment in an otherwise excellent system and is frustrating for the new player. 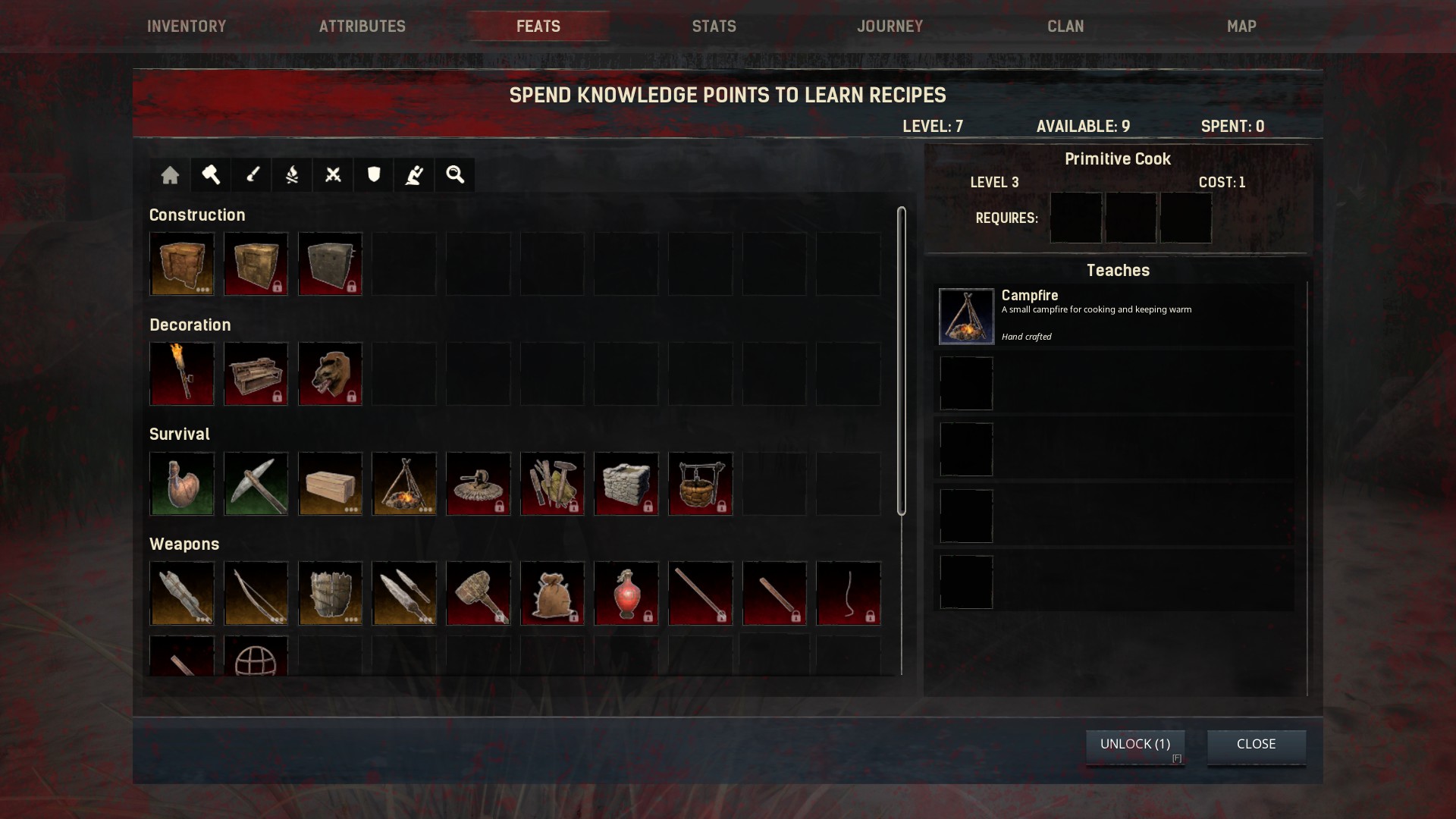 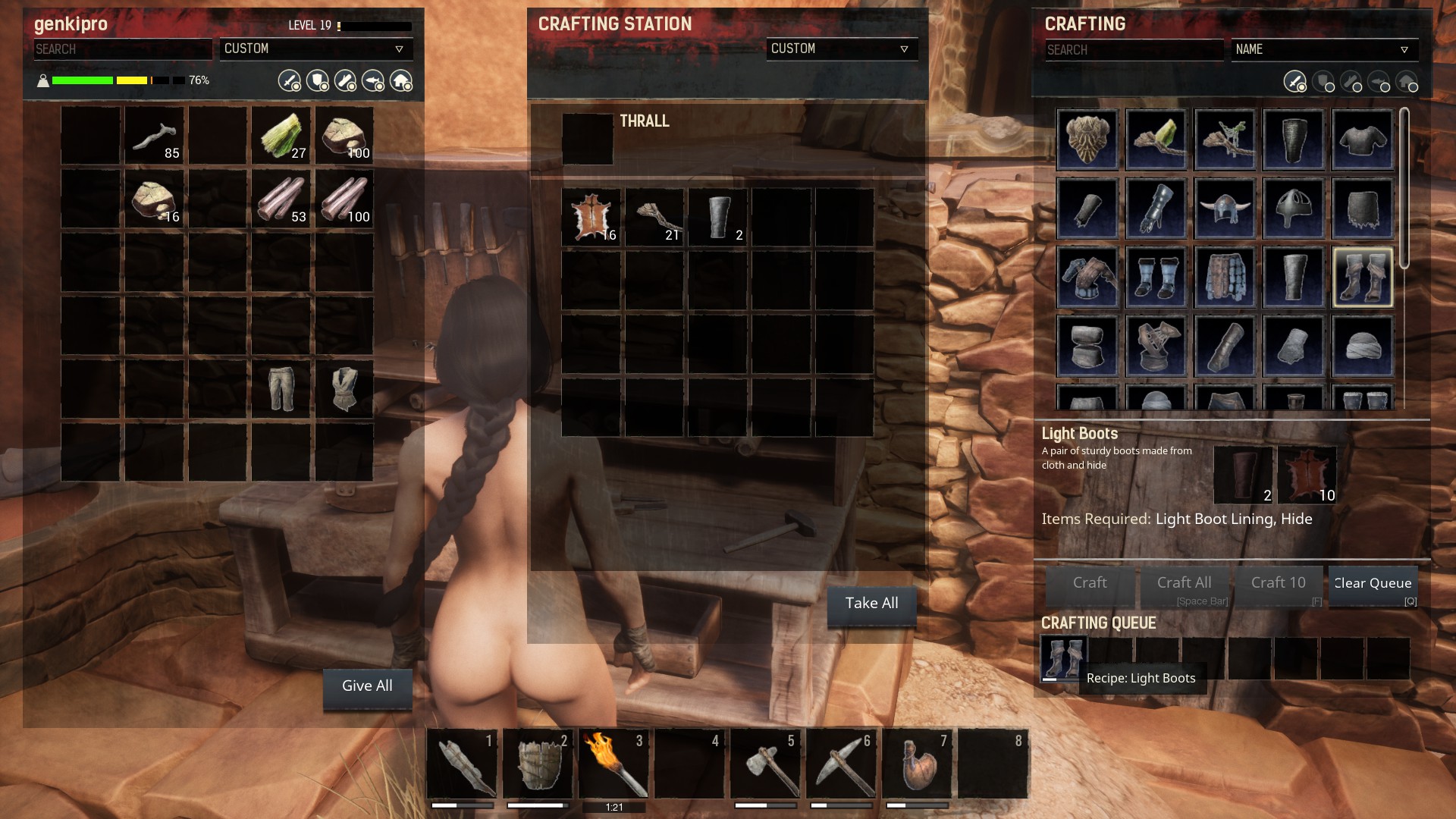 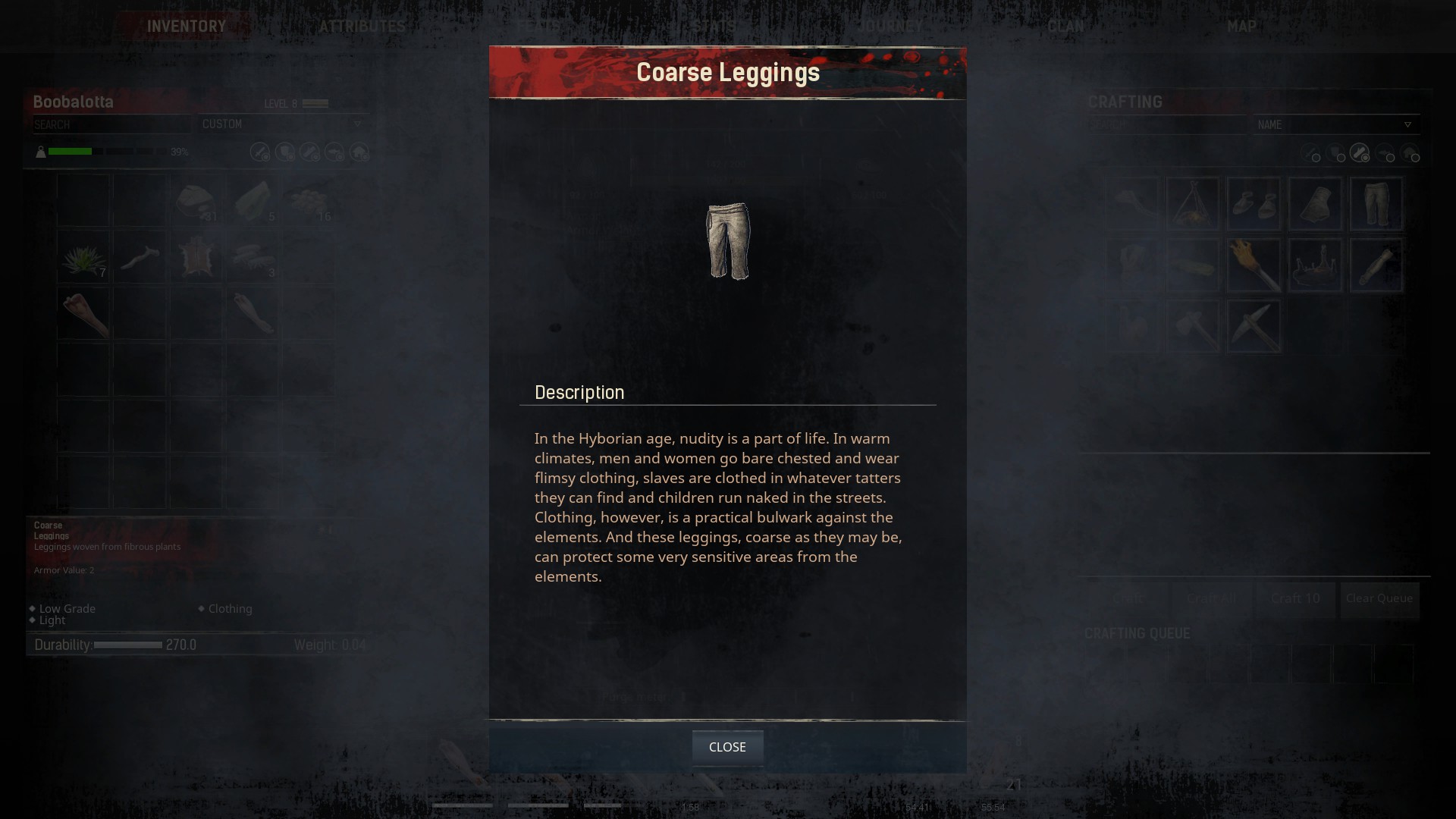 Building rules are hard to work out for the beginner, too. After hours of play I still don’t really understand how the supports and foundations work; sometimes I can build what I expect and other times I can’t place the part where I want. In the end I built my sprawling, cliff-hugging house using roof pieces for floors. Sometimes fitting a piece is hard, too, requiring you to find just the right angle and mouse placement to fill a gap. I hate to say it, but I think 7 Days to Die does building better. 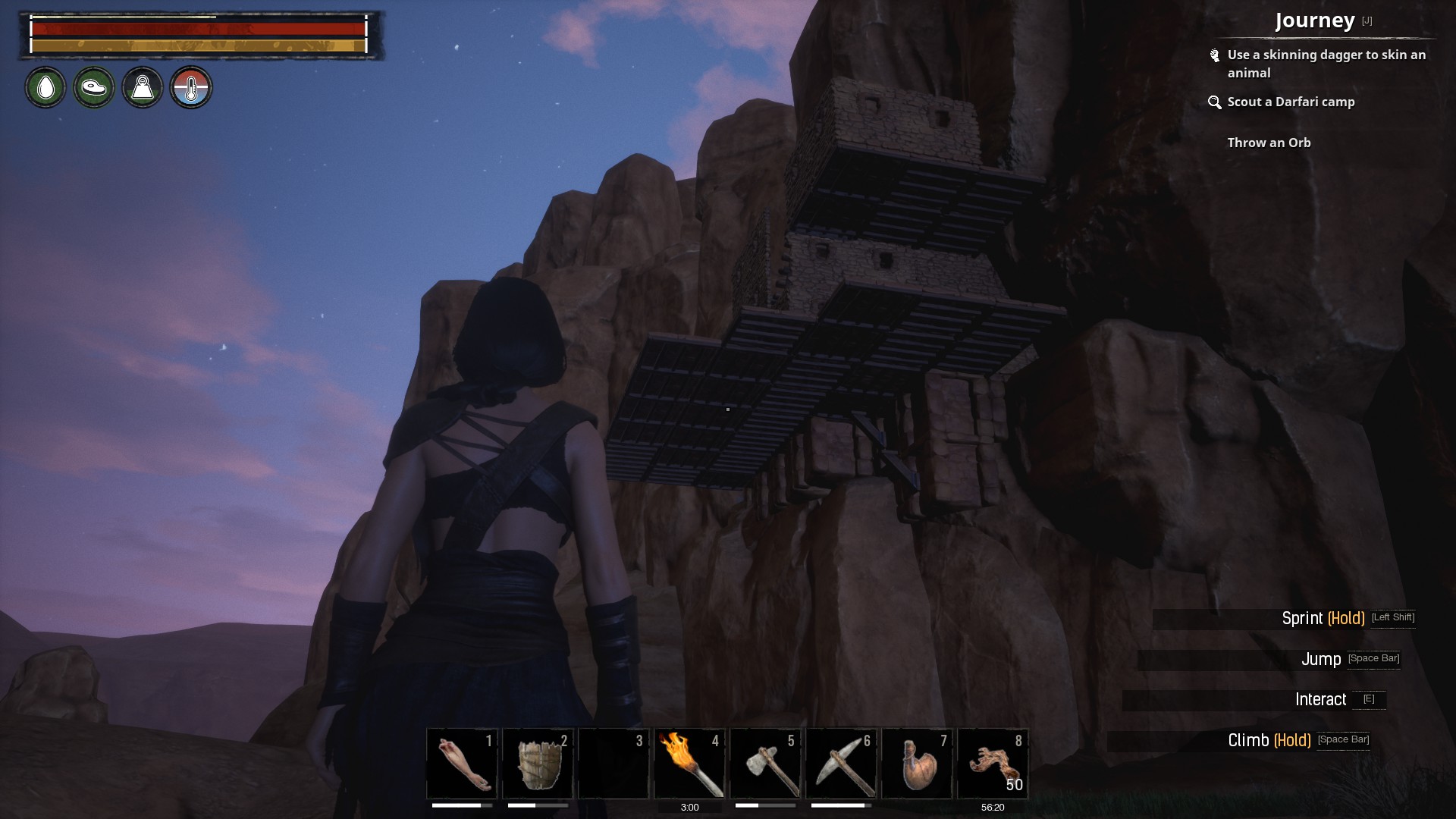 The rest of the game is all about exploration of the impressive world and combat with its denizens. This is great fun, but very dangerous, especially if you don’t watch your stamina usage. In my first hour I’d already died more times in Conan than any other game in the genre. But respawning is fast and easy, and running off naked to recover your fallen belongings is a challenge all of its own. It’s a nice bonus, too, that when you do find your body you can cut it up and eat it, and use your own dismembered limbs as weapons. Did I mention it’s a bit gory? 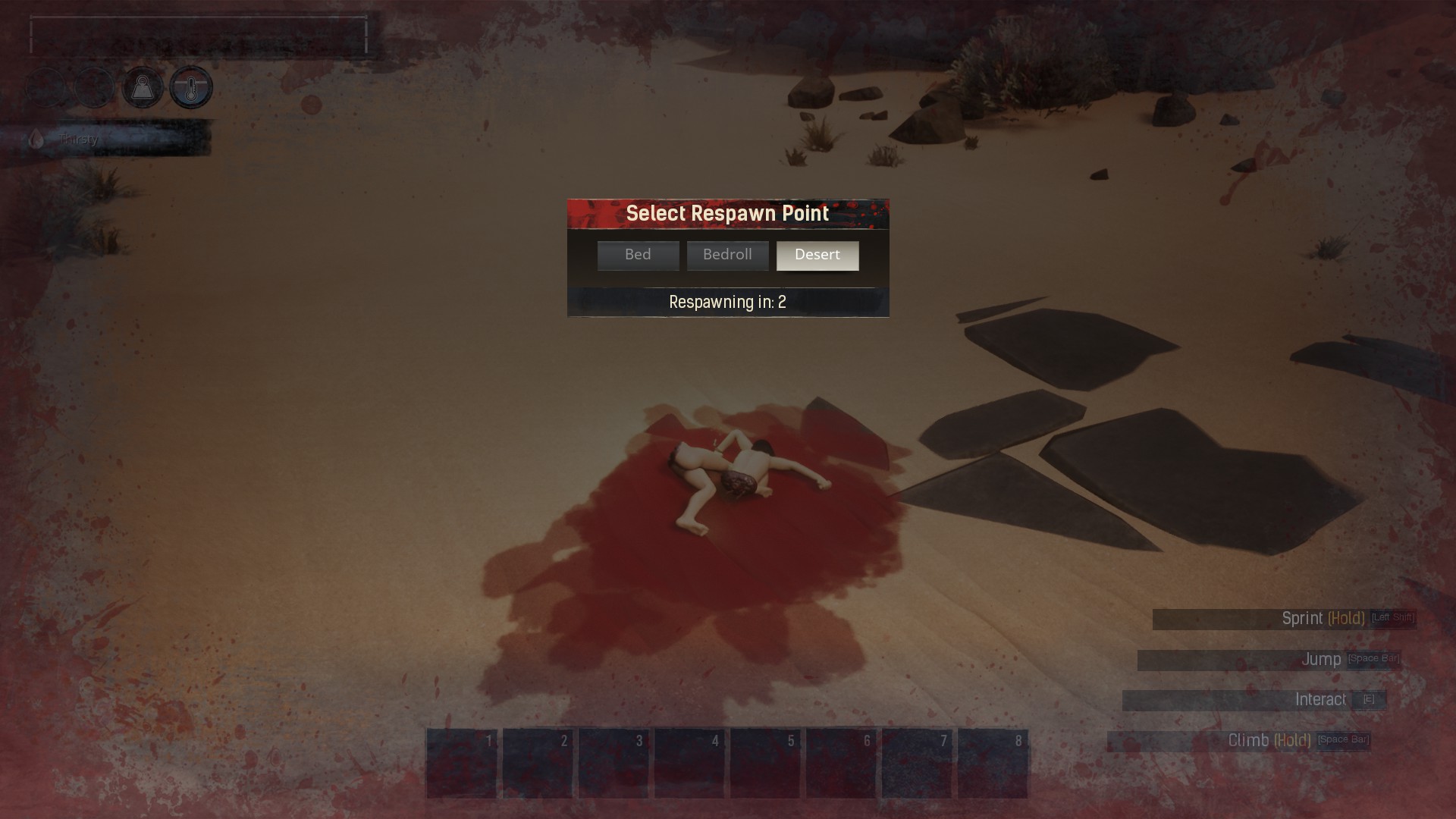 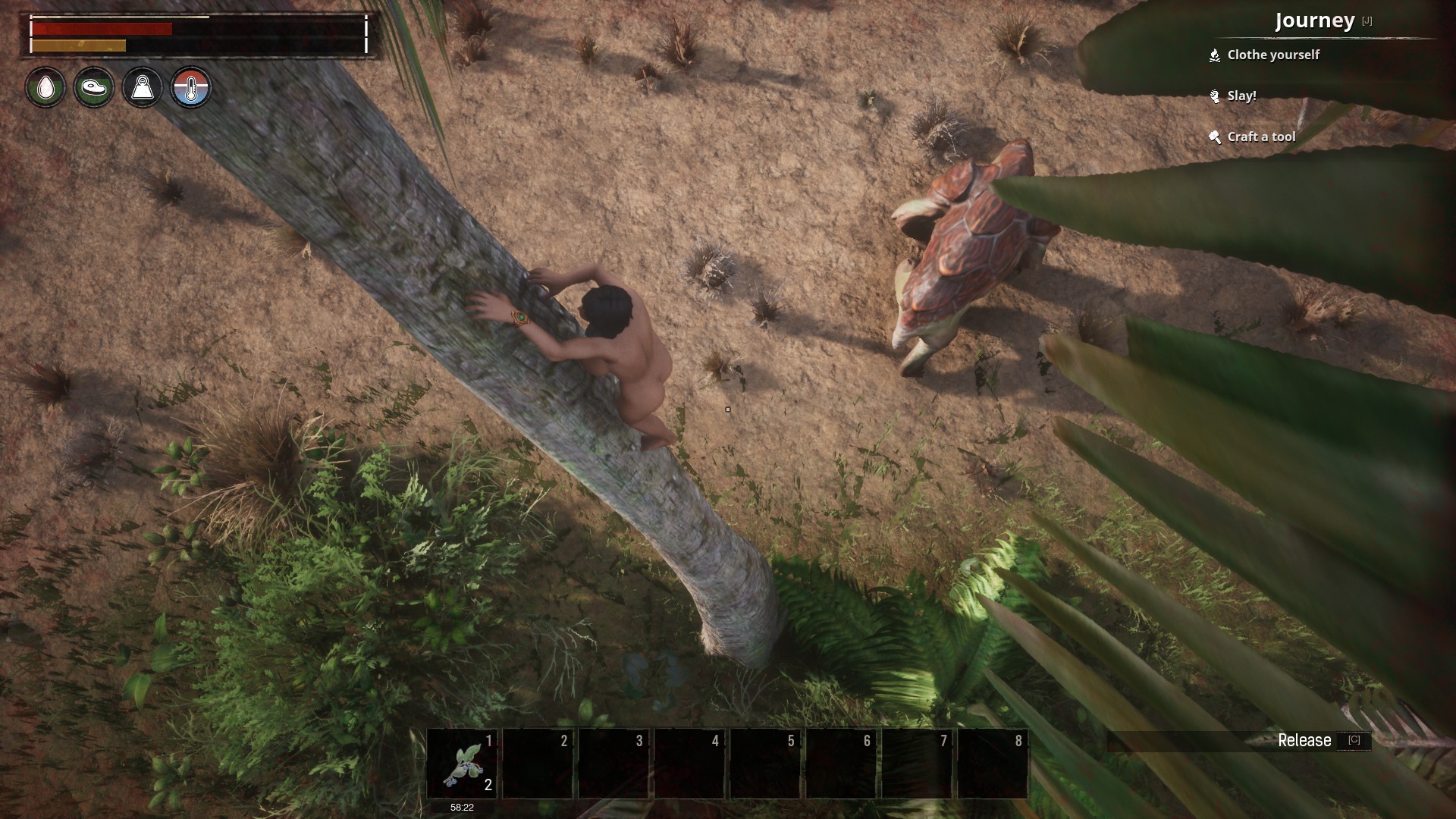 Another nifty feature is the thrall system, by which you can subdue and break the will of NPCs, turning them into your slaves or bodyguards. Religion also features prominently and provides some spell-like effects in the otherwise relatively low-magic world.

There’s a captivating single-player campaign of sorts, with a sort of story to find and follow and a structured list of tasks to complete: The Journey. It also provides PVE, PVP, or a mixture of both on any of the hundreds of active public servers, both official and player-hosted. This works exceptionally well, even with moderate pings, though I guess I should expect that from Funcom. Add the Steam Workshop for mods and there’s a great replayability here; I’ve barely scratched the surface. 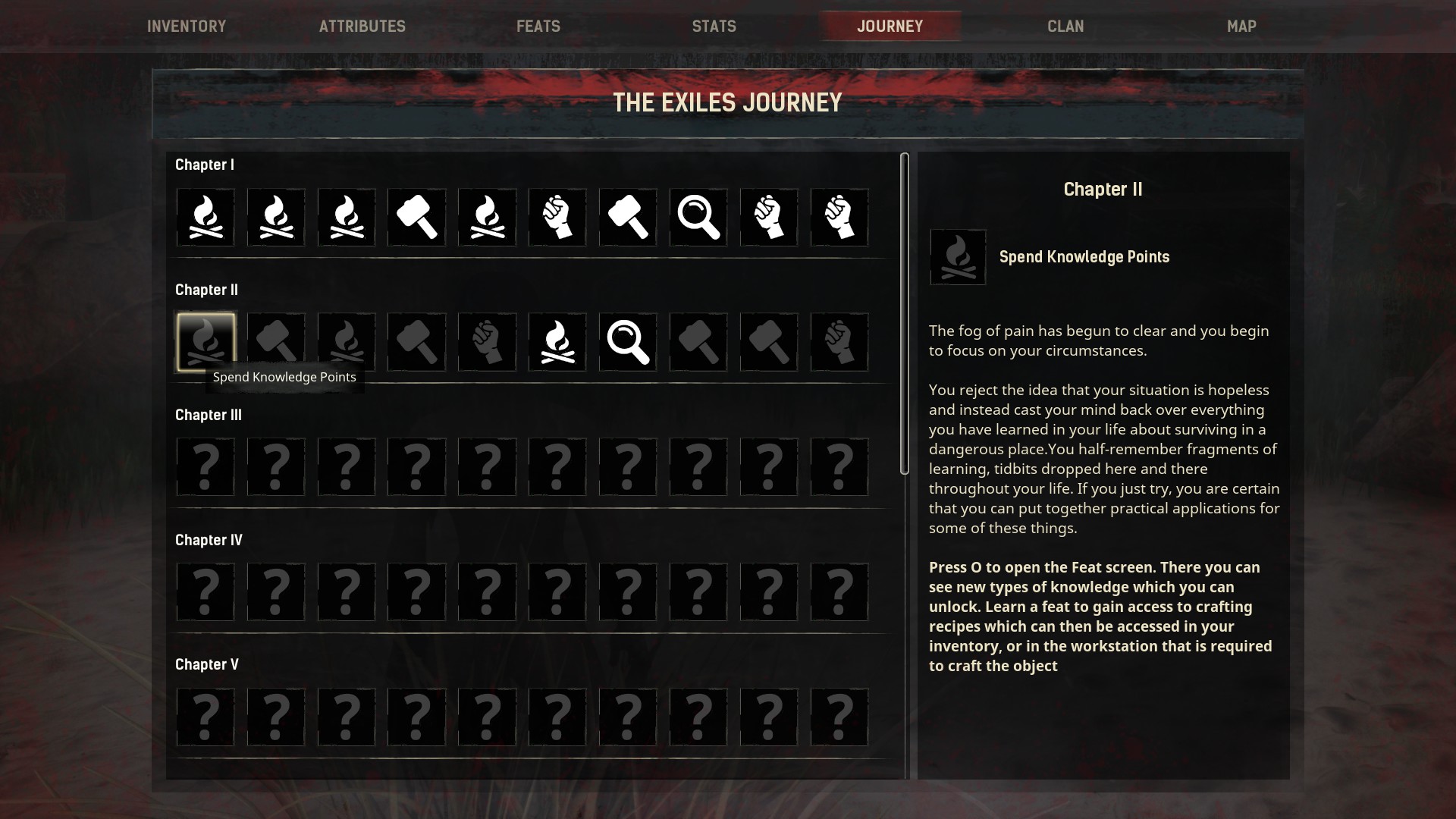 I’m a tad disappointed that the world is the same each game, even down to the placement of trees and rocks, but it’s beautiful and logically designed, which are aspects that are hard to get right otherwise. Given the choice between a desolate, nonsensical procedural world and the hand-crafted wonder that is the Exiled Lands, I’d definitely pick the latter. Still, I hope that there will be expansions set on another map or adventures across procedurally generated landscapes available in the future. 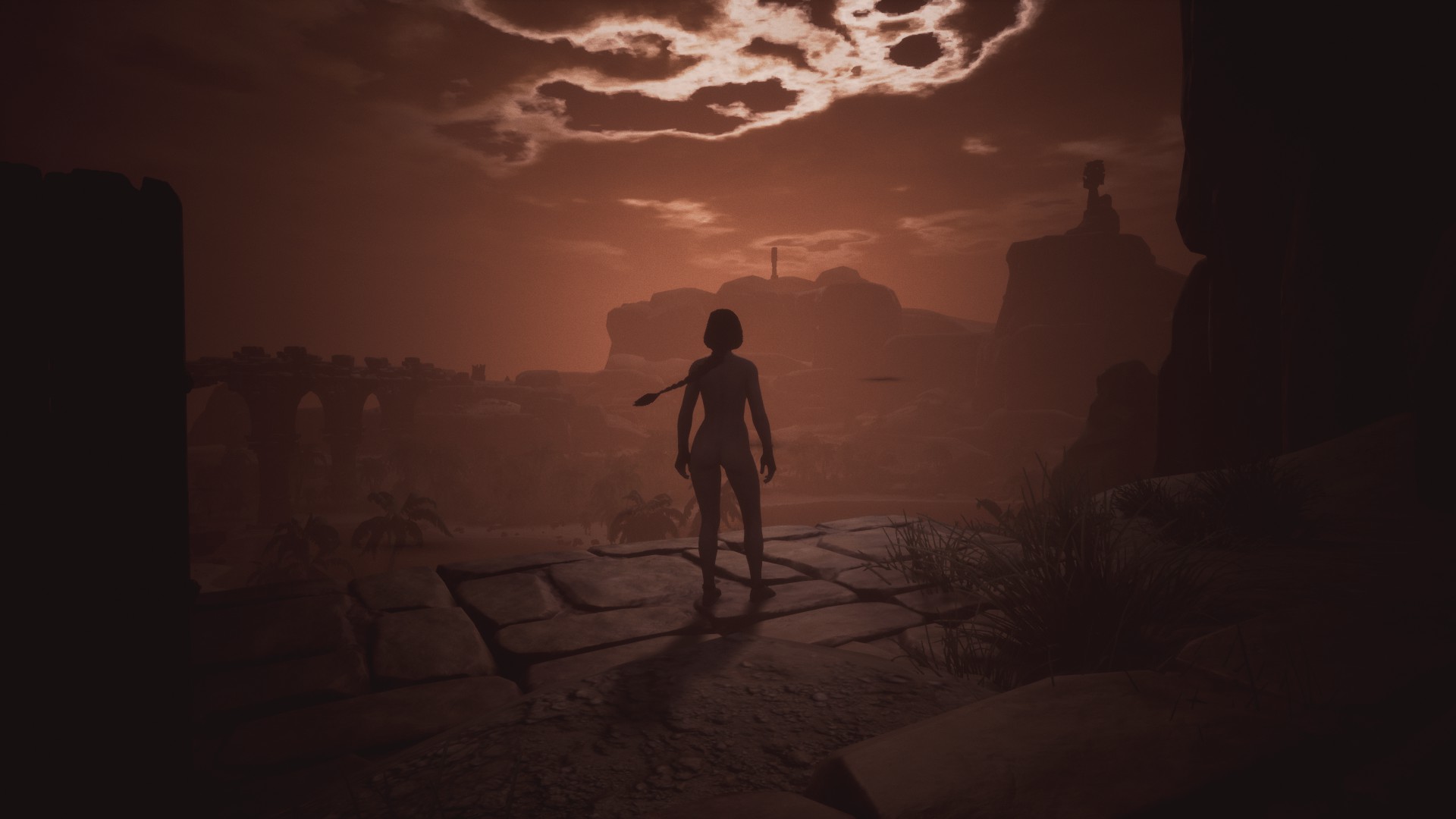 Conan Exiles is in my top two survival games. The graphics are brilliant and I confess I find the nudity very appealing, but I wish there were more character variation. But the game itself offers so much and is so well made. The world is vast and interesting, crafting and building are excellent, if a little hard to use at first, and the dual nature of the game — very competent MMO and compelling single-player experience — are hard to discount.

If there’s anything about the game that interests you then I urge you to pick it up. There are a few niggles here and there, but whether you’re into solo or small-group play, or larger multi-player PVE or PVP competition, Conan Exiles is a truly wonderful game.