BATTLETECH allows you to take command of a company of mercenary Mech Warriors, fight your way to riches, and esteem to piloting great hulking bipedal war machines armed with exotic weaponry. Oh, and just maybe take down a conniving despot while you’re at it.

BATTLETECH is the latest game from Harebrained Schemes (HBS), published by Paradox Interactive.

Based on Jordan Weisman’s tabletop war game from long ago, BATTLETECH transports the player to the year 3025, when humanity has spread across the galaxy, colonizing countless star systems. But it’s still the same old humanity: greedy, selfish, and prone to war. As a result, human space is split into different areas, each governed by its own ruling body. The pinnacle of defence research is the BattleMech: a massive bipedal exoskeleton weighing 20 to 100 tons, powered by a nuclear reactor, with huge weapons with unparalleled mobility and flexibility, and piloted by Mech Warriors.

The game begins in Cormordir, the capital of the Aurigan Reach: a sector of rimward space of relatively little import to the Inner Sphere. The head of the ruling family, Lord Tamati Arano II, has died and his daughter, Lady Kamea Arano is set to take his place. But her uncle, Lord Santiago Espinosa, betrays her and takes the Reach.

You play a Mech Warrior escorting Kamea to her coronation. Thanks to you and Ragu, your friend and trainer, Kamea survives the initial attack. But her dropship is destroyed, your ‘Mech is sabotaged, and Ragu is brought down. You are rescued by a mercenary company, and thus begins your life as a mercenary Mech Warrior.

BATTLETECH has exceptionally high production values. Everything in the game looks and sounds wonderful.

The hand-drawn animated introductory video is beautiful: a brief overview of humanity’s leap into space and subsequent fall into chaos, and the rise and fall of the Star League. The title screen looks fantastic, too.

In-game graphics are excellent. Inter-mission sections are set in your dropship, presented as a series of rooms seen from fixed cameras, with your crew represented by nicely textured and animated 3D models. The different backdrops set the scene well, presenting a believable environment. Missions are full 3D with a slightly erratic, but flexible, manual camera. Terrain, lighting, and weather effects all look lovely and are influenced by biome and time of day. ‘Mech models are well animated and move about the terrain blowing up each other convincingly, with different texture paint jobs and destructible parts. 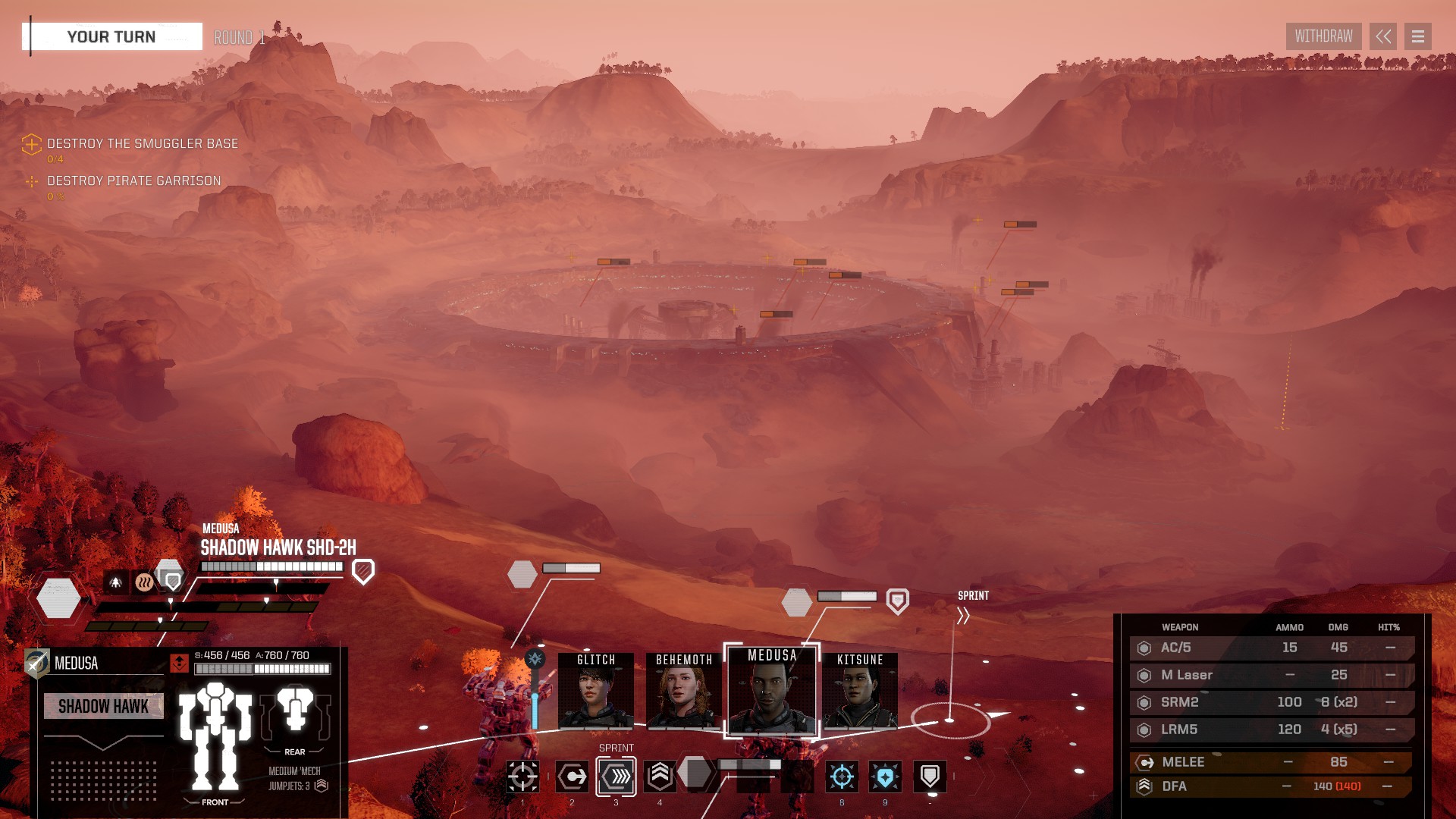 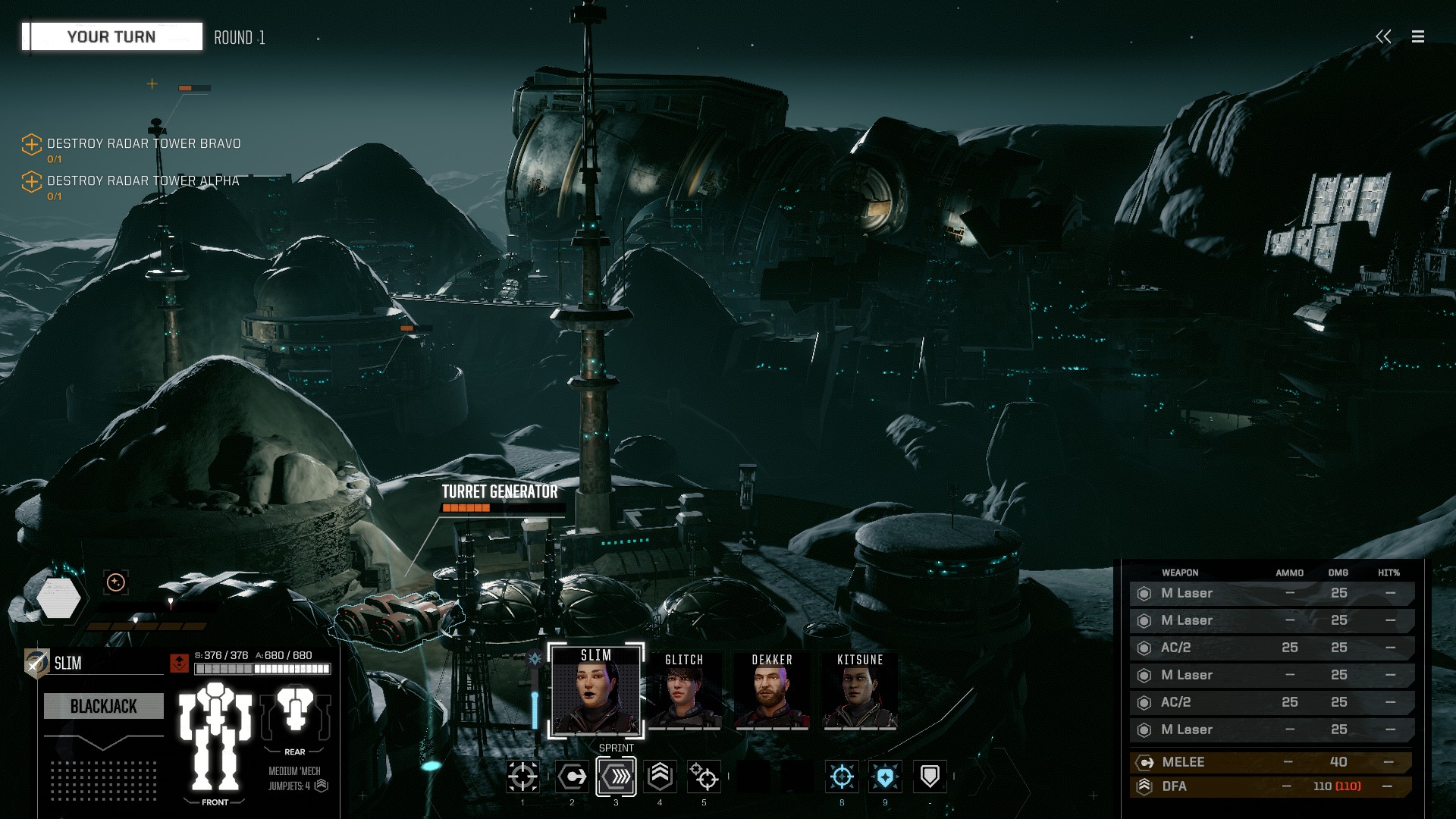 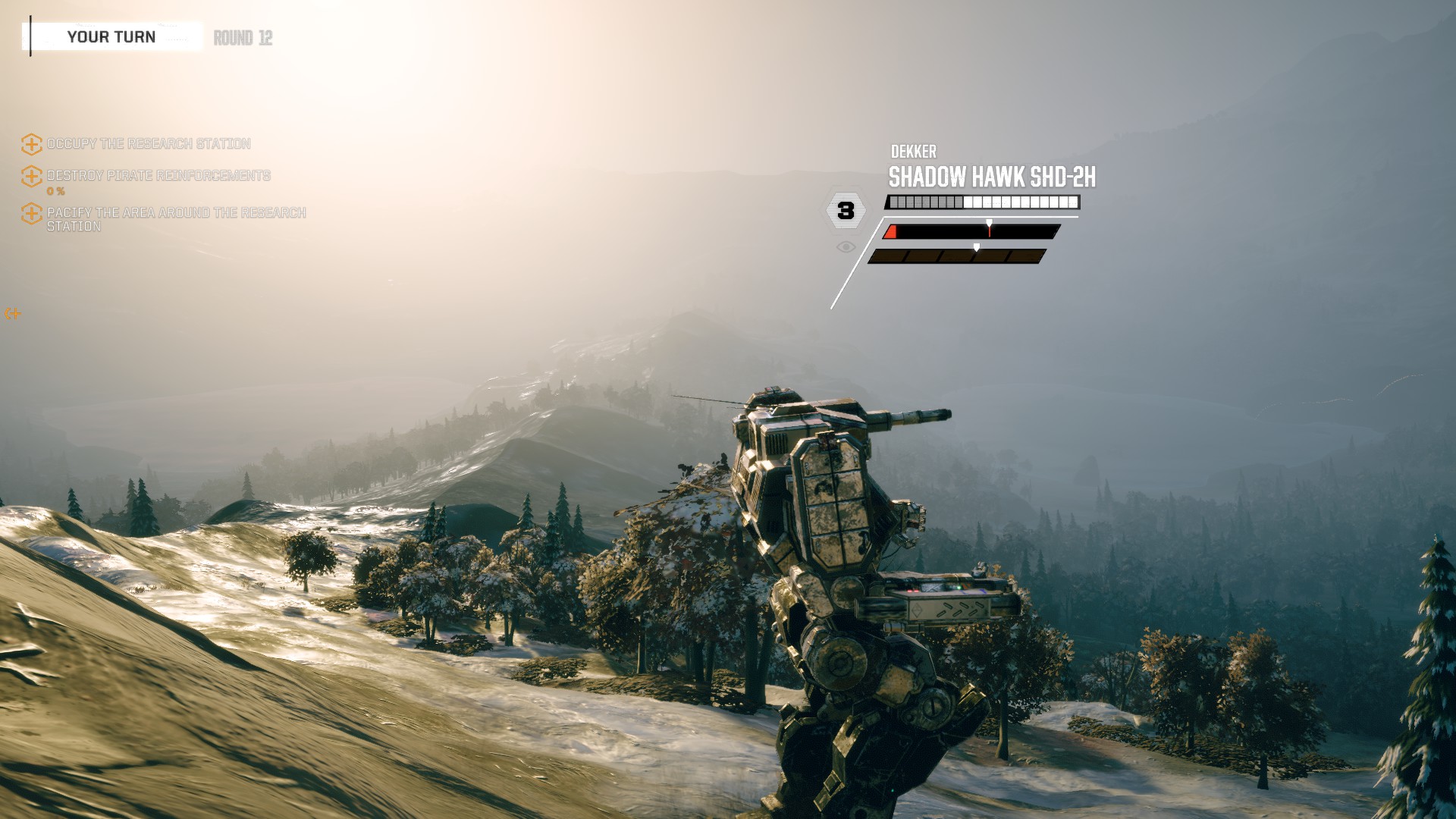 There are some clipping issues, but they don’t detract from the experience significantly. The automatic action camera is a great idea, but often terrain or other objects block the action, and any damage to your ‘Mech is hidden when the camera focuses on an enemy.

Weapon effects are great! It’s extremely satisfying to pound an enemy with an alpha strike or stomp on a fallen opponent, laughing with glee as bits of ‘Mech fly into the air. Particle effects look great, too, but buildings aren’t as impressive; though they’re destructible the parts don’t look that convincing.

The UI is all clean lines and consistent presentation and fits the game perfectly. There’s a lot of information, but tooltips are used extensively for presenting lore and game information such as damage and targeting numbers, and it’s quick to learn. 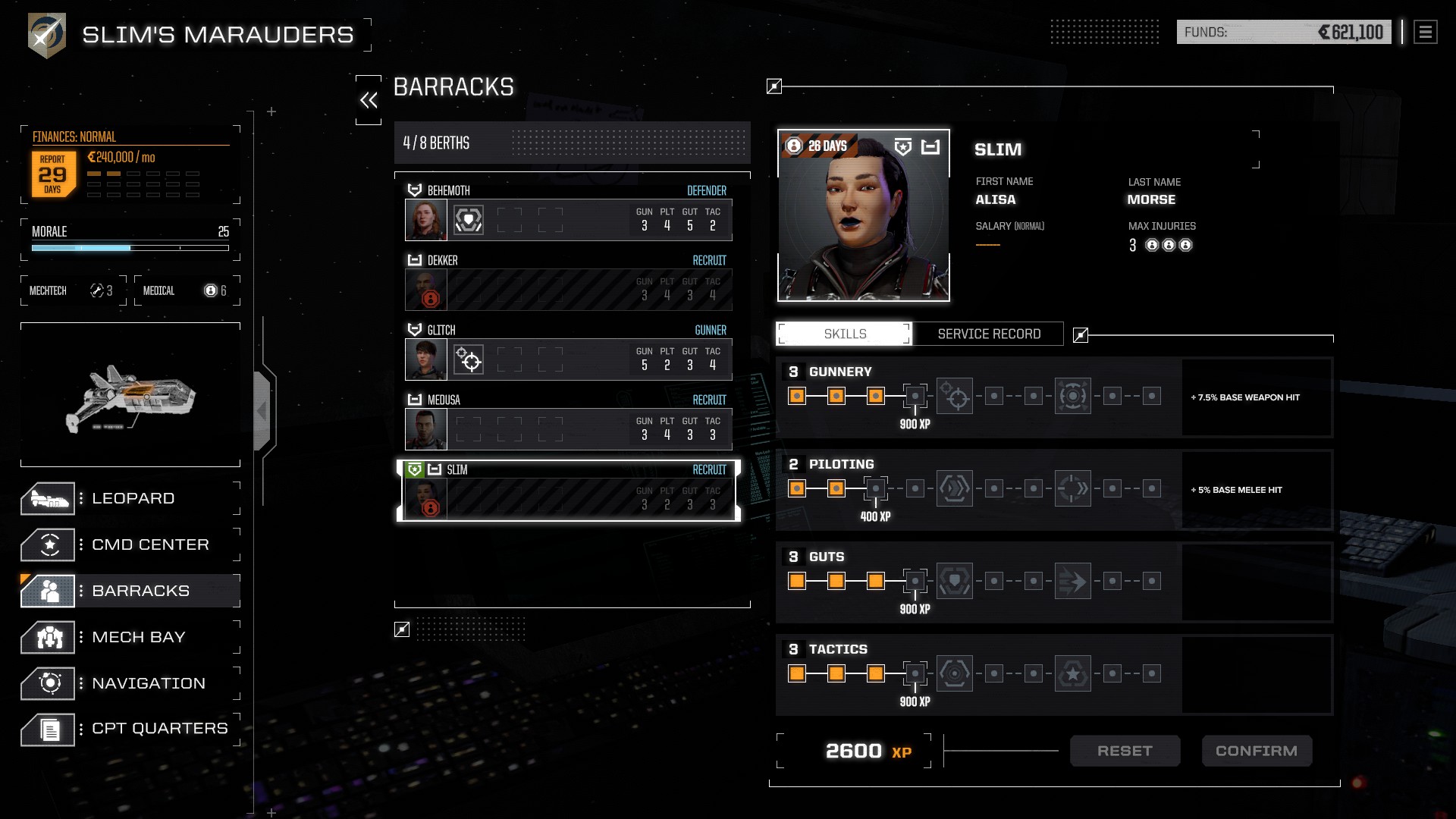 Music is from Jon Everist, who worked on HBS’s Shadowrun games. Tracks range from big, bold battle tracks to quiet introspectives that fade in and out of the background. It’s like a classic space opera and fits the game perfectly. Sound effects are good, but footfalls of the larger ‘Mechs could use a bit more bass. Weapons and explosions sound terrific. There’s also a fair amount of professional voice acting in the game, but it’s not quite fully voiced.

There are graphics, sound, and gameplay options galore. I’ve had rare stuttering when rotating the camera rapidly need the edge of a map, but no other issues running with everything on full on my GTX 1070 laptop. 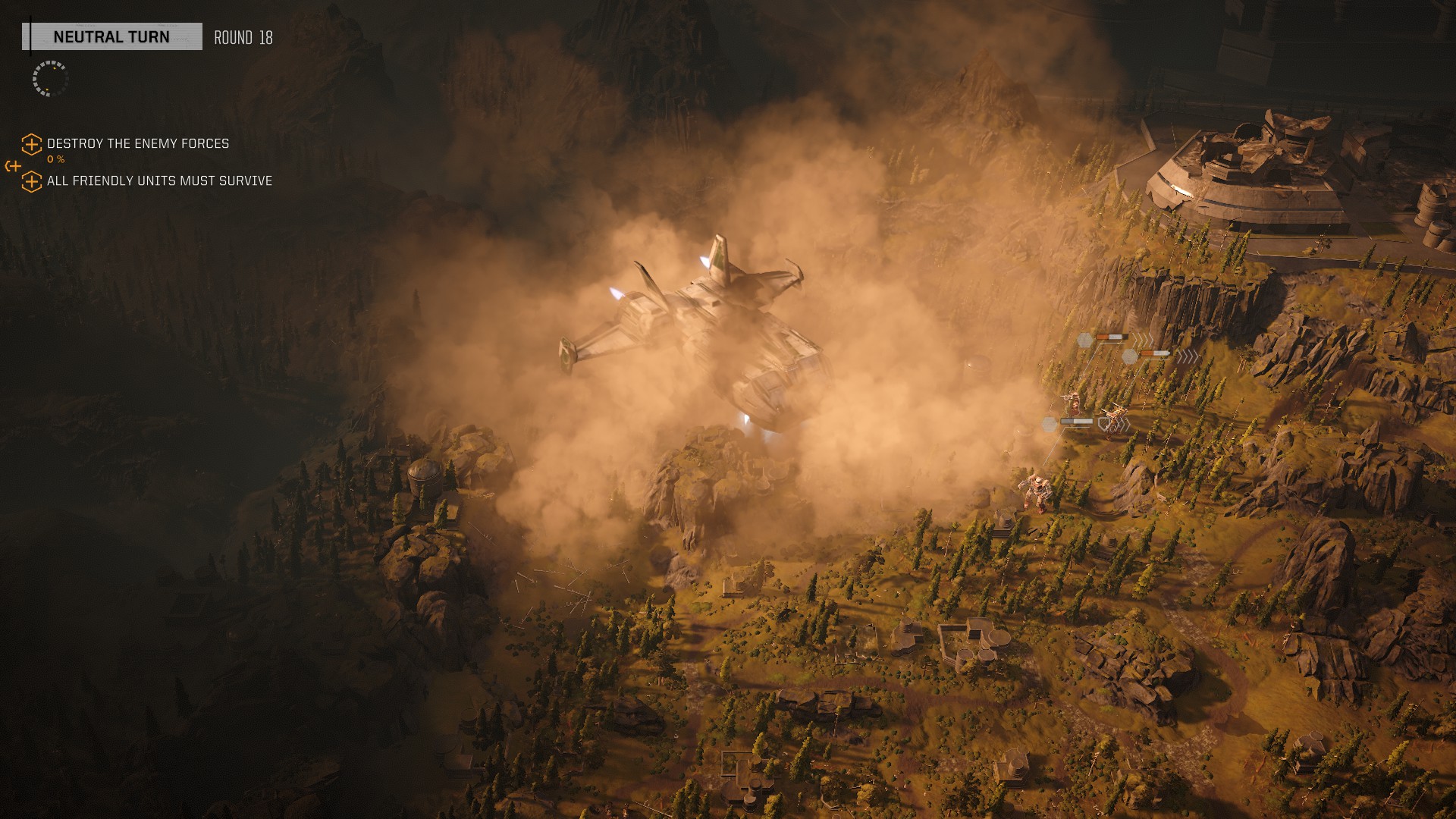 It’s BattleTech. Anyone familiar with the previous game should be able to pick it up within a few minutes.

For anyone else, it’s a turn-based war game where you control BattleMechs of four weight categories: light, medium, heavy, and assault. Each round of a mission each unit has one turn in an order based mainly on the category. The unit can move and either attack or use a special ability. Each mission usually continues until there’s only one side left standing, but some do have objectives that aren’t simple destruction. Each ‘Mech chassis has the same basic parts — legs, arms, torso, and head — but a distinct shape and hard points for different weapons and devices. ‘Mechs can continue to fight after having some parts destroyed, but some are critical, such as the head. There are many trade-offs to be made in customizing individual Mechs and choosing which to deploy on a mission. 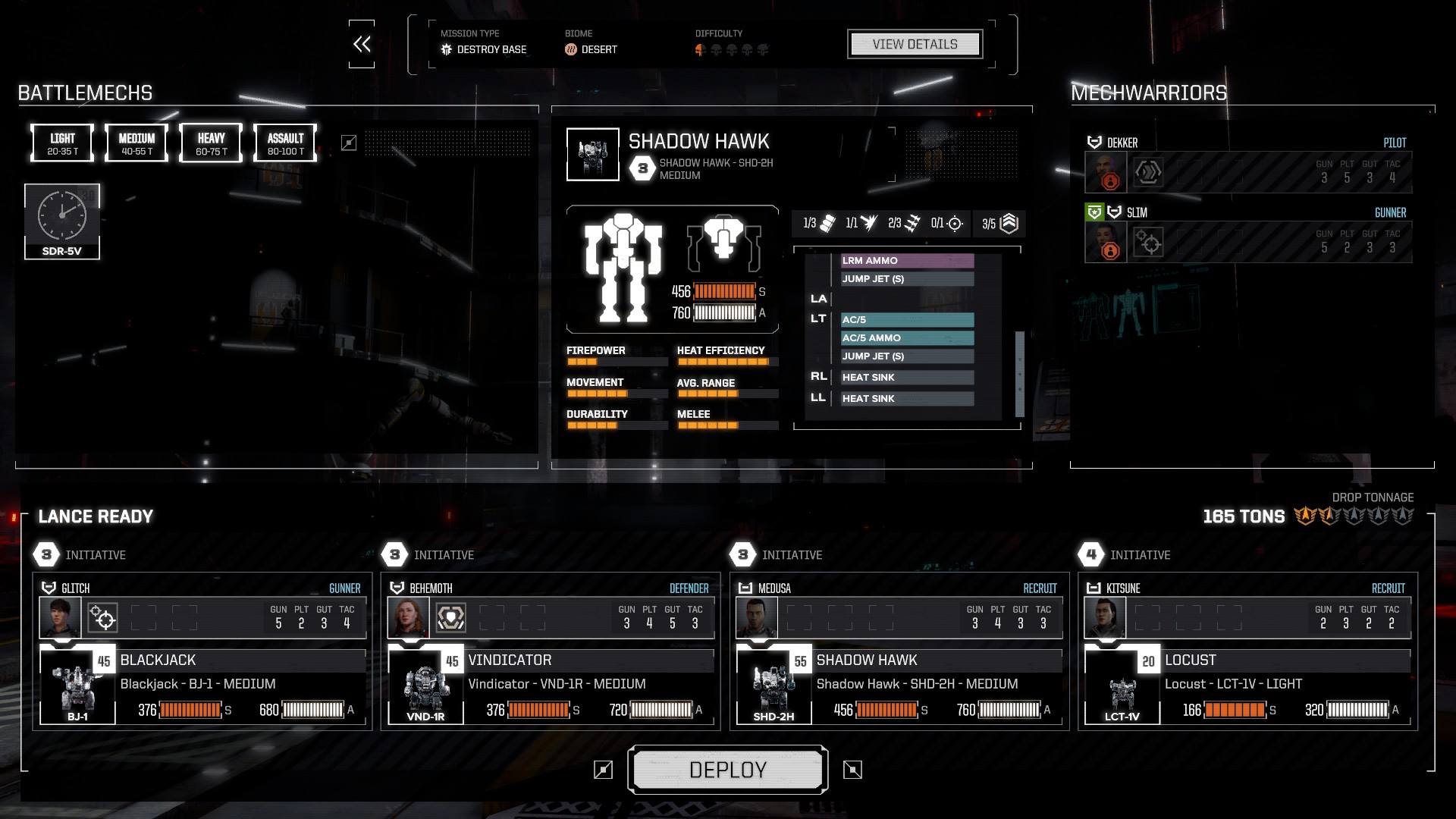 Though I’m no longer intimately familiar with BattleTech — it’s been many years since I played it — I think HBS have done an excellent job. Some numbers and balance seem a bit different, but that could just be my memory failing me.

The game has two modes: campaign and skirmish. From what I’ve seen, the campaign is a far-reaching story with a good variety of missions, along with an opportunity for grinding of non-story missions to extend your play as you desire. The story is well told, with only very few grammar errors and plot inconsistencies. You have your own drop ship, so you can travel around picking up side missions, but monthly upkeep and travel expenses are high, so it can be risky. 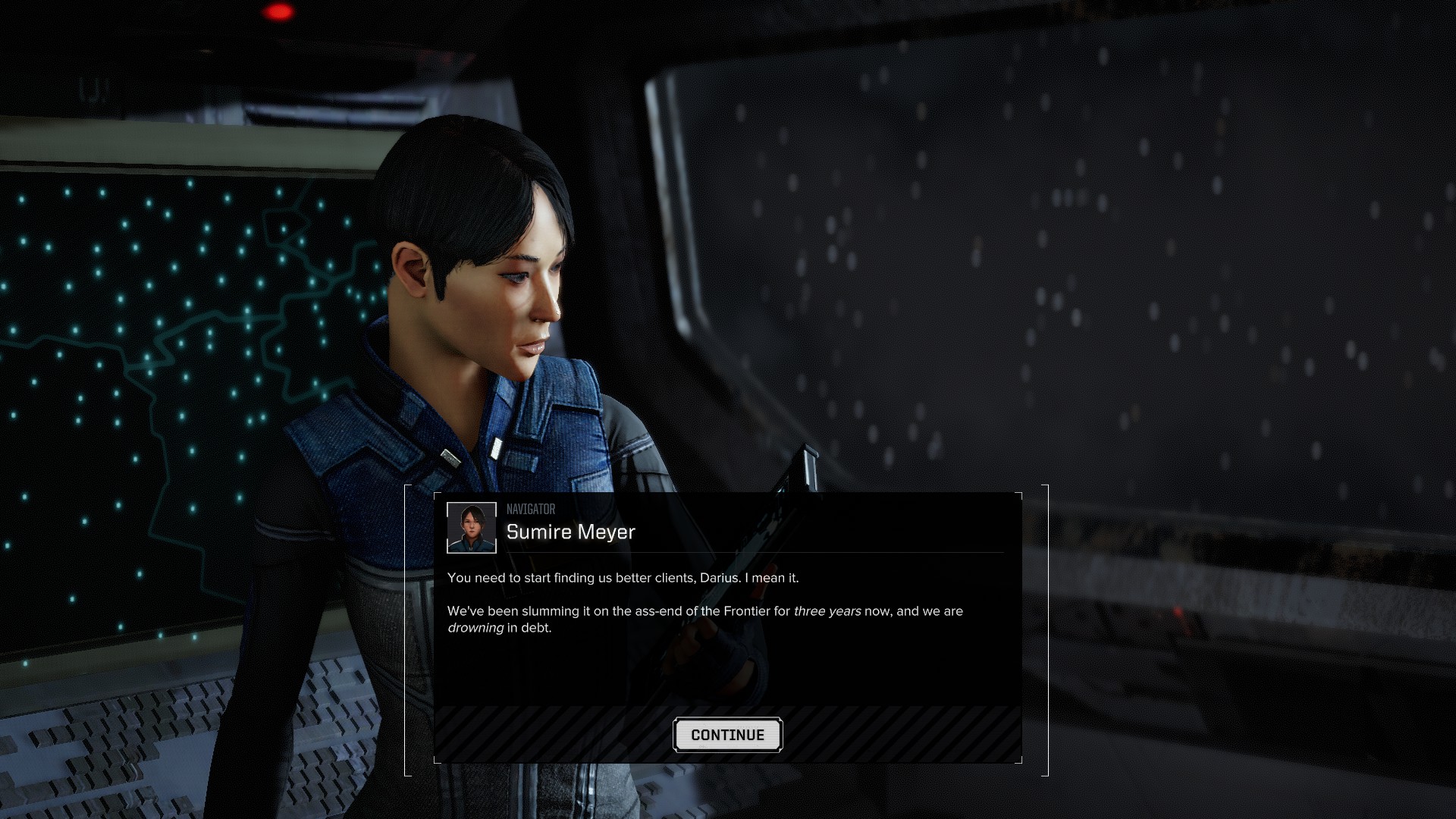 Though the core of the game to me is the campaign mode, skirmish can be fun, too. Here you choose your map, money, and lance of up to four ‘Mechs, and have at it against an opponent. As well as the many provided standard loadouts, you can customize ‘Mechs in the ‘Mech Lab. You, too, can create a lance of peace-loving hippy Locusts with no weapons. Hooray! 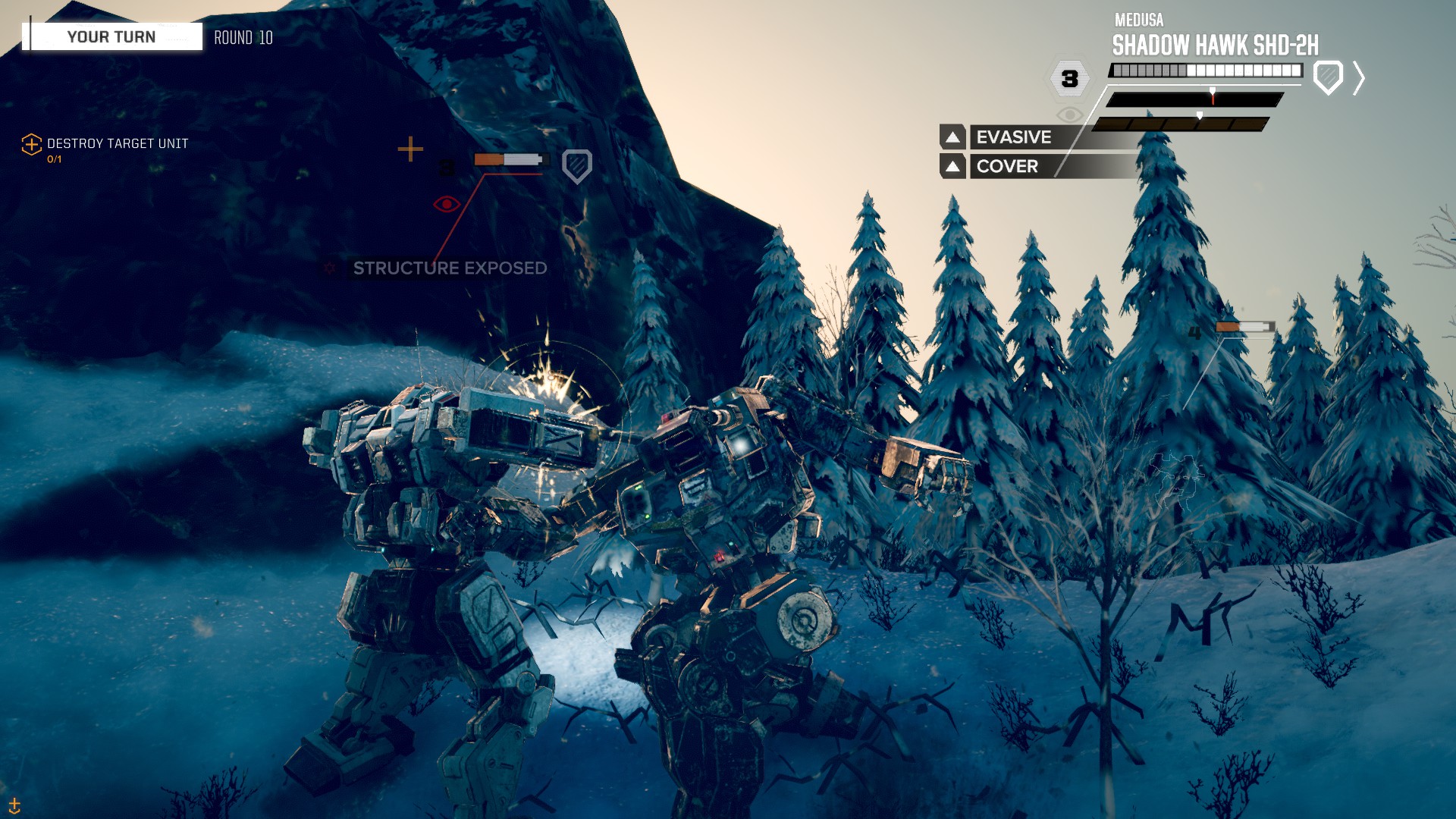 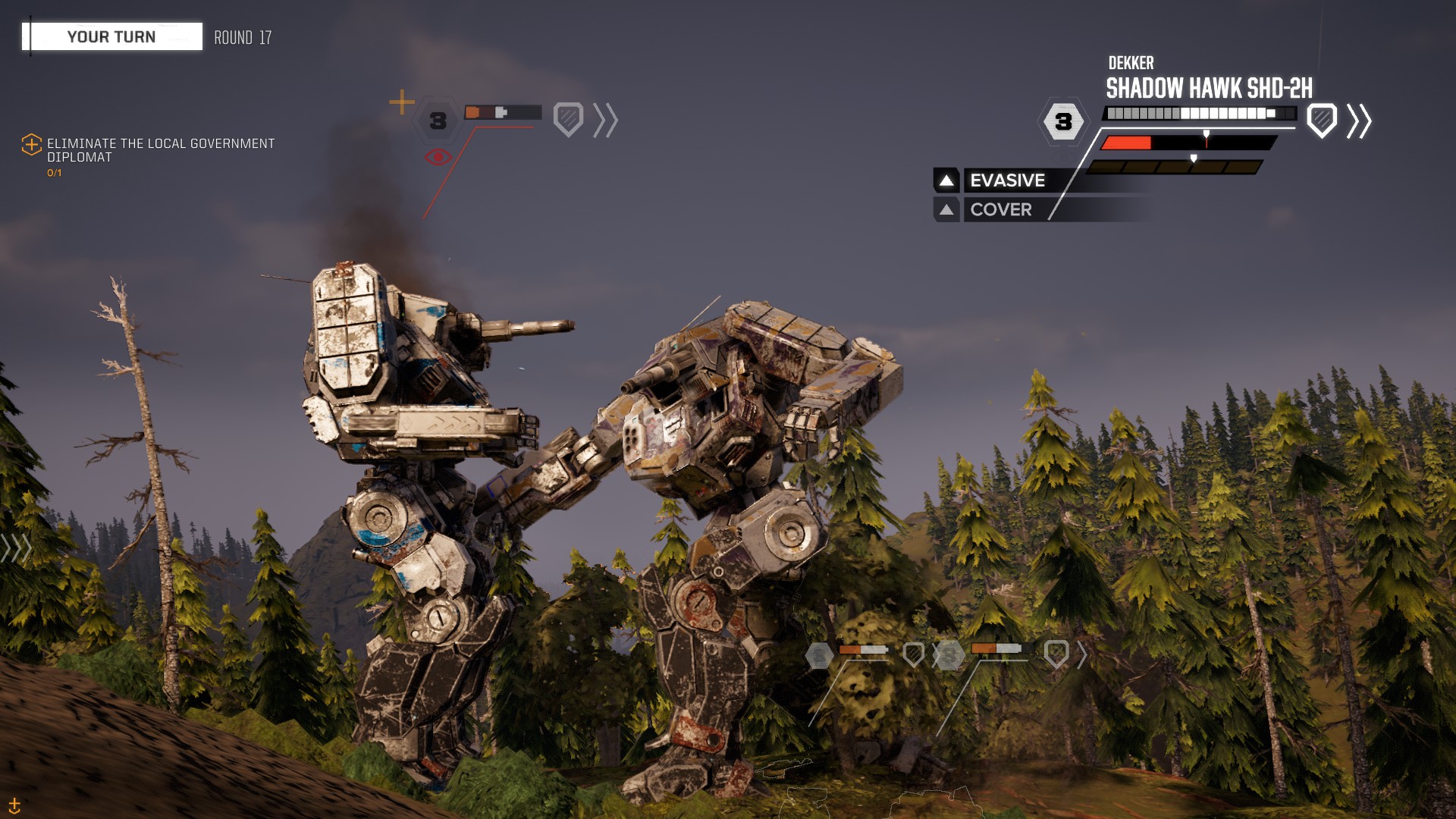 Skirmishes are single player against the computer or PVP against a human opponent. I was unable to find anyone in the multiplayer lobby, but that’s probably because game hadn’t yet been released. It has huge potential, though at the moment it appears to be limited to only a single lance (four ‘Mechs) per player and only two players, which is a shame. I’d love to play a battle with a dozen light ‘Mechs taking on a lance of heavier opponents, or a three-way battle for supremacy. A mission designed would be great, too!

I encountered a few niggles. First, loading times are very long: not quite as bad as GTA Online, but worse than HBS’s Shadowrun games, which were long. Other smaller niggles I found were that it’s very easy to move by accident when you’re planning on standing still and attacking; the right-click display doesn’t work while targeting; escorted units don’t always do what they should; reputation increases remove the ability to do easier missions; and Paradox account integration is finicky. Oh, and why are sale prices so abysmal!? Salvage is completely unprofitable. 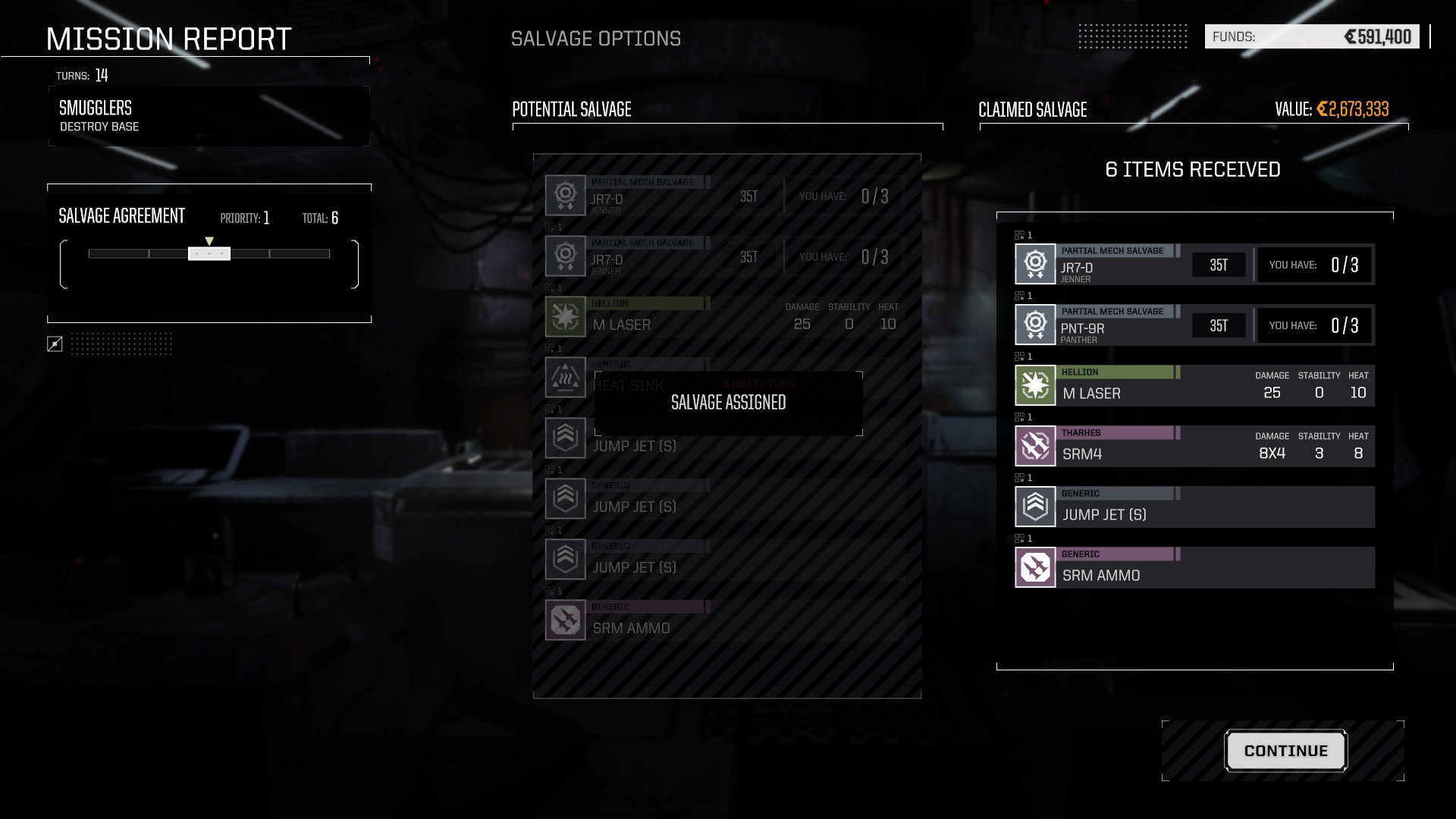 BATTLETECH does what HBS’s previous games did for Shadowrun, and it’s every bit as good. Quite simply, I love it.

If you’re a long-term fan then pick it up and return to a life of heat sinks, LRMs, and Death from Above. If you’re not already a fan, then why not pick it up anyway?

Note: I reviewed a pre-release version of the game; some content may have changed.