Far Space VR is a short action game with some great VR concepts. It’s just a shame about the shooty bits.

Far Space / Far Space VR is a short Virtual Reality – compatible title from prolific indie developer, Alexey Glinskiy. The title can apparently be played in both VR and non-VR modes; this review is of the VR version.

In Far Space you play one of a team of three astronauts repairing a space station that’s orbiting Earth and under attack by aggressive, insect-like aliens. The rest of your team are killed, leaving you to escape the station and make your way back to Earth any way you can.

Graphics here are really pretty quite good. The space station internal sections look nice, and the little alien dude that attaches to the protagonist’s arm is well animated for an overall enjoyable experience overall. Special effects and lighting are great, too, though the flames look a little wonky up close. The star scape around you is quite nice, too, though not very detailed. 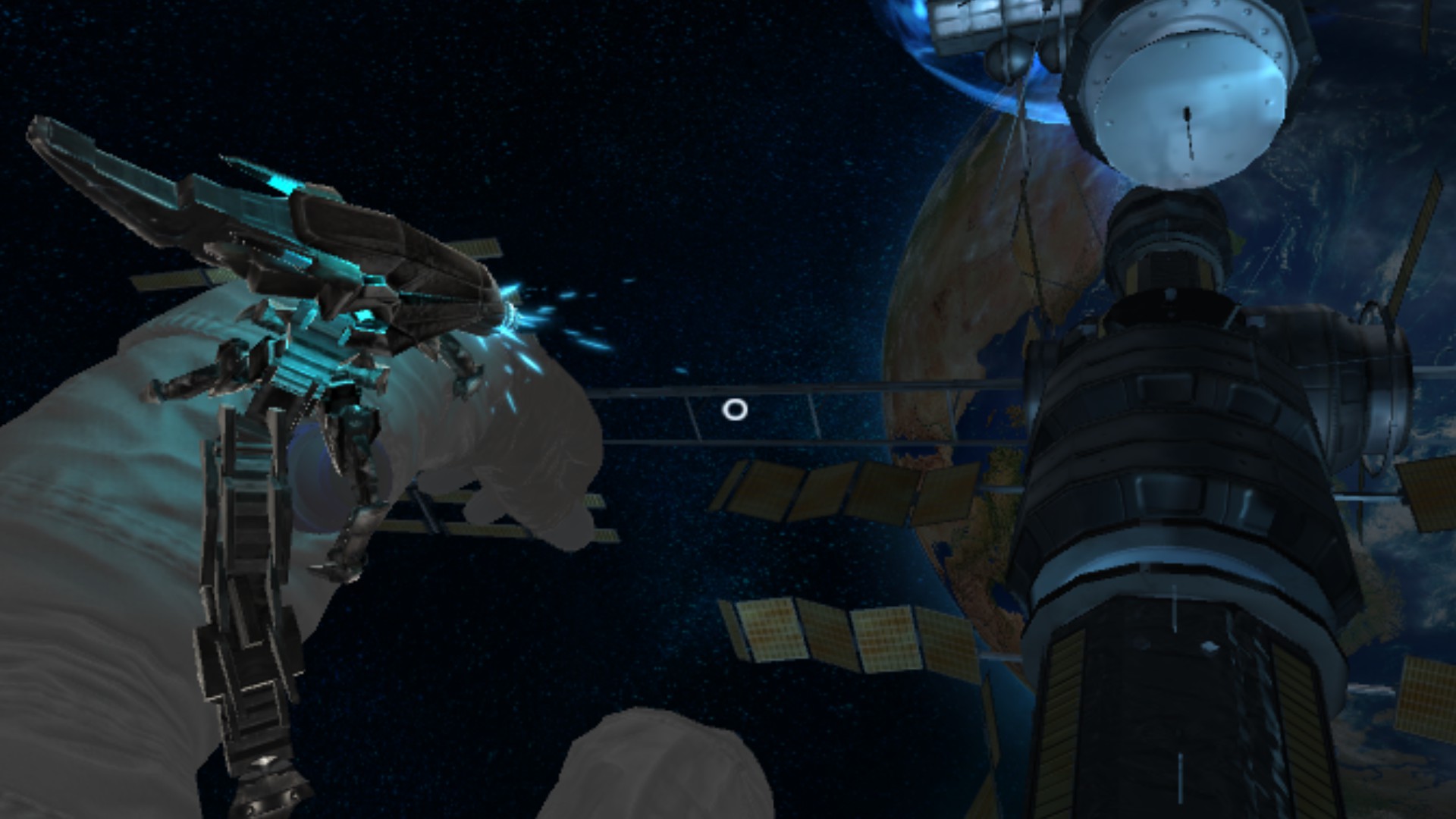 Earth looks lovely, but unimaginative. There’s no night/day divider, which means that the sun must be behind you through the whole game, but nothing else is really lit to look that way, so it seems a little odd. The ‘portal’ looks pretty dodgy and doesn’t really make much sense, and the graphics in the brief end sequence don’t keep up the same quality as the rest of the game. 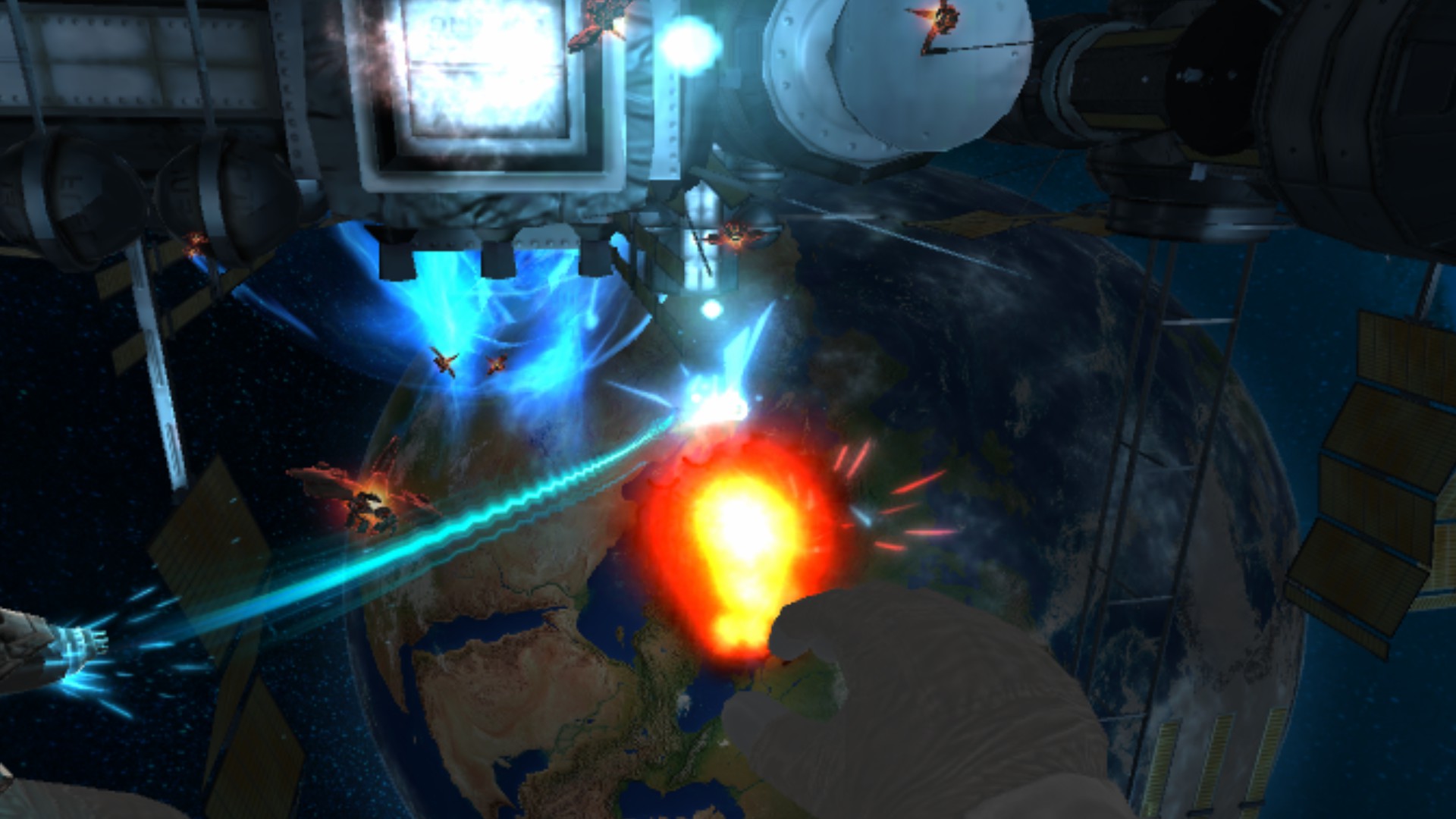 The interface is simple and well done; it works very well using only head tracking. I really like the arm-mounted button to access it, too. 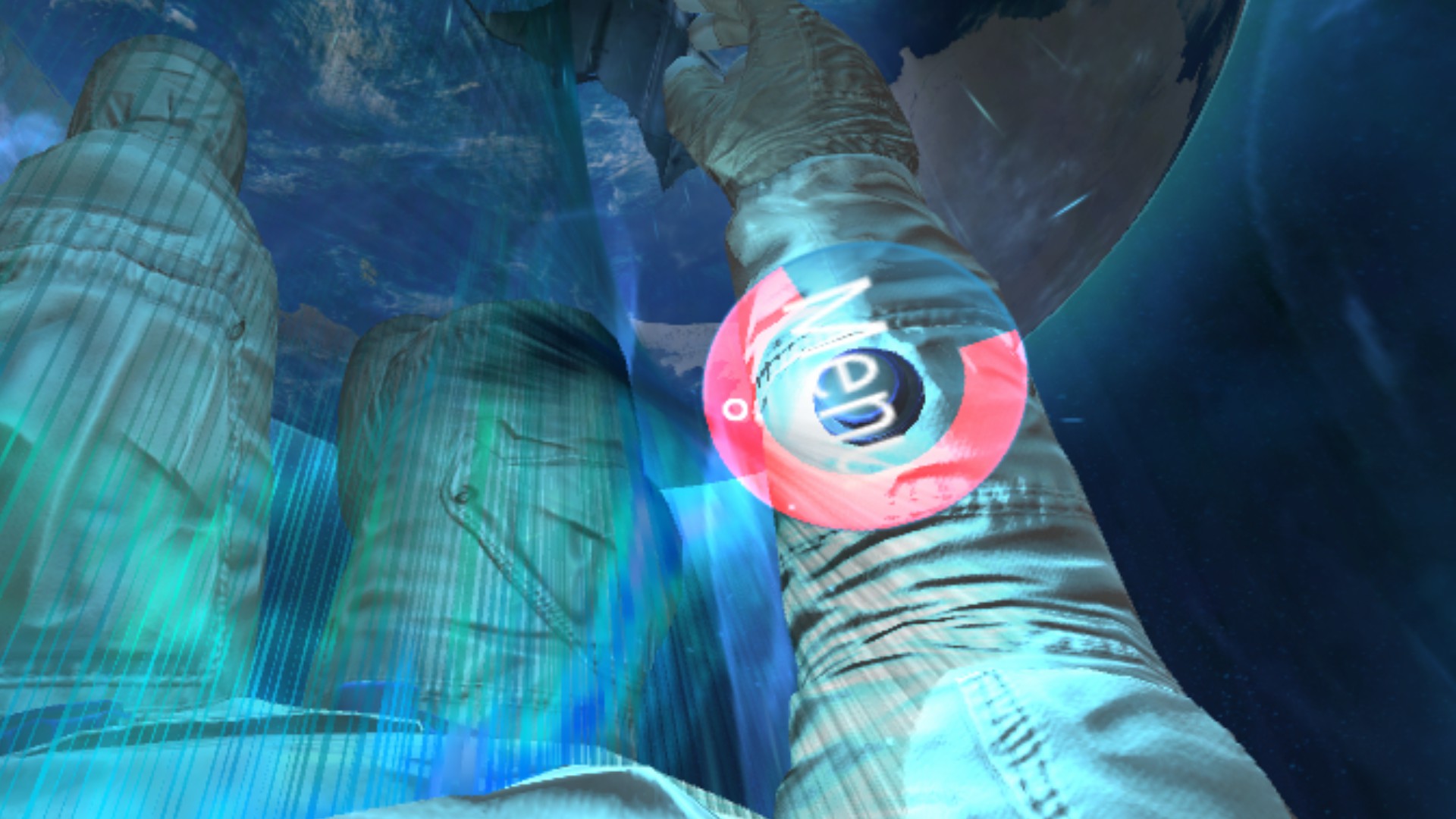 There are a few action-oriented music tracks that are repetitive, but very well made. The game is short enough that they don’t become annoying, and the music does fit the game perfectly, with a sort of dramatic action feel. Sound effects are suitable and not overdone, though one could argue that there shouldn’t be any other than what the protagonist would hear inside his space suit. The voice acting falls into the “so bad it’s good” category. Really. It’s some of the worst I’ve ever heard.

There are two graphics toggle settings: lighter/darker and Quality good/fantastic. I didn’t change the lighter-darker setting and I’m not sure if the quality makes much difference; the graphics look pretty good with both. I didn’t encounter any performance issues on a GTX1070 running with the fantastic setting. 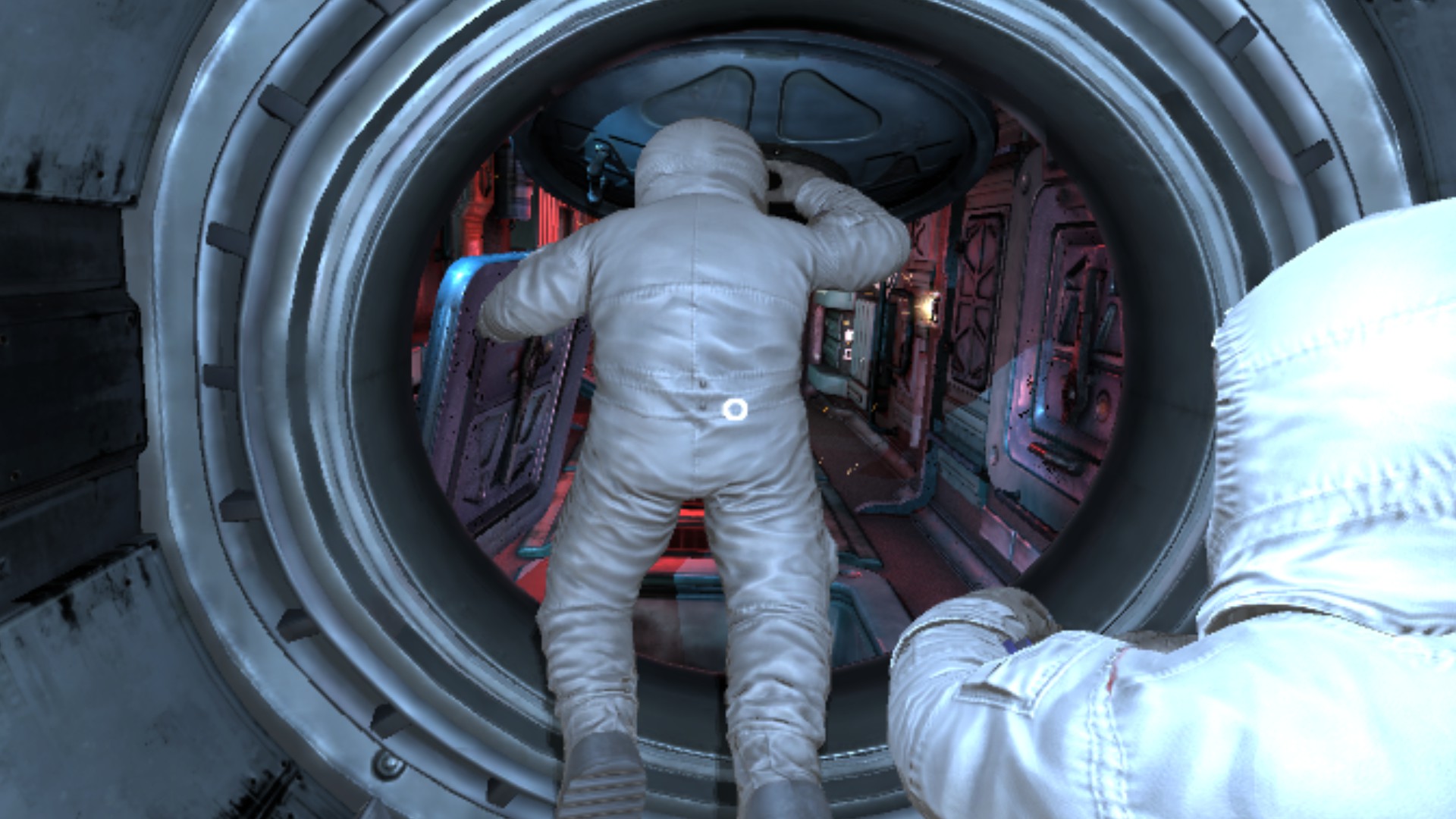 The game is split roughly in half into interactive-movie sections and shooter sections.

In the movie sections, you freely control the protagonist’s head rotation and pitch with your VR headset, but you’re unable to move his body or limbs directly. The only interactivity is in the form of selecting options from a small number of choices to move the story along: STAND UP, JUMP, MOVE FORWARD, etc. When you select a choice the camera moves the protagonist on a set path towards the next choice, and the camera position follows along, though you’re still able to rotate or pitch it about freely to examine your surroundings. Though there’s not really any choice here — the ‘wrong’ selection invariably gets you killed and respawned back at the decision point again — these sections are quite fun and show what a modern-day VR Space Ace or Dragon’s Lair – like title could do. 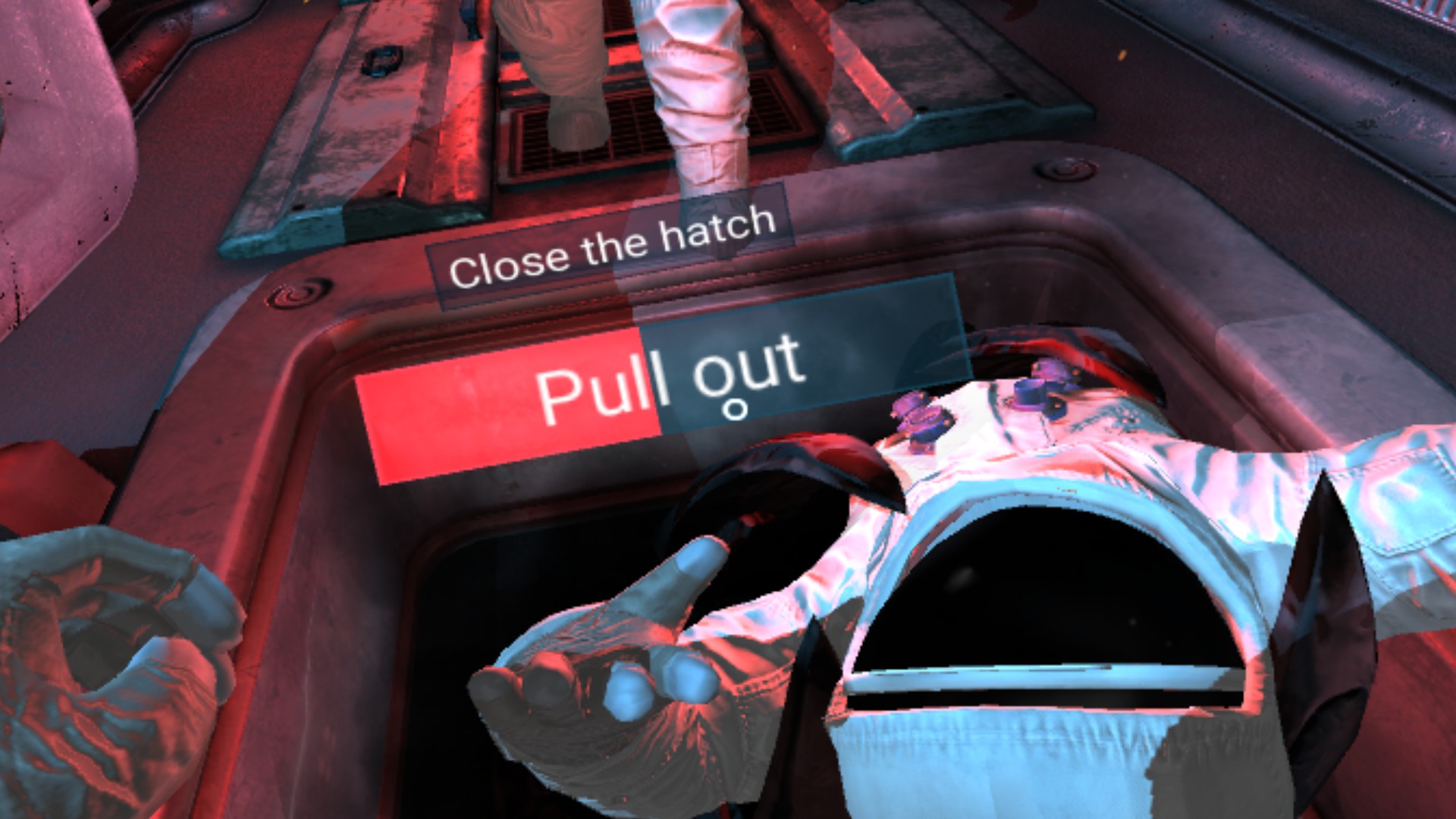 In the shooter sections you control a little robot-scorpion-like alien who obviously has some sort of beef with the invaders. You spew a bright blue laser from your face and use it to chase down and destroy the red aliens before they get close enough to damage you. Laser tracking is a bit slow and follows the headset cursor, and honestly, after the first minute or so I’d had enough. There’s only one type of enemy and each one spawns and charges straight for you. It’s not very interesting or exciting, and there are absolutely no tactics involved: just point your head where the aliens are. 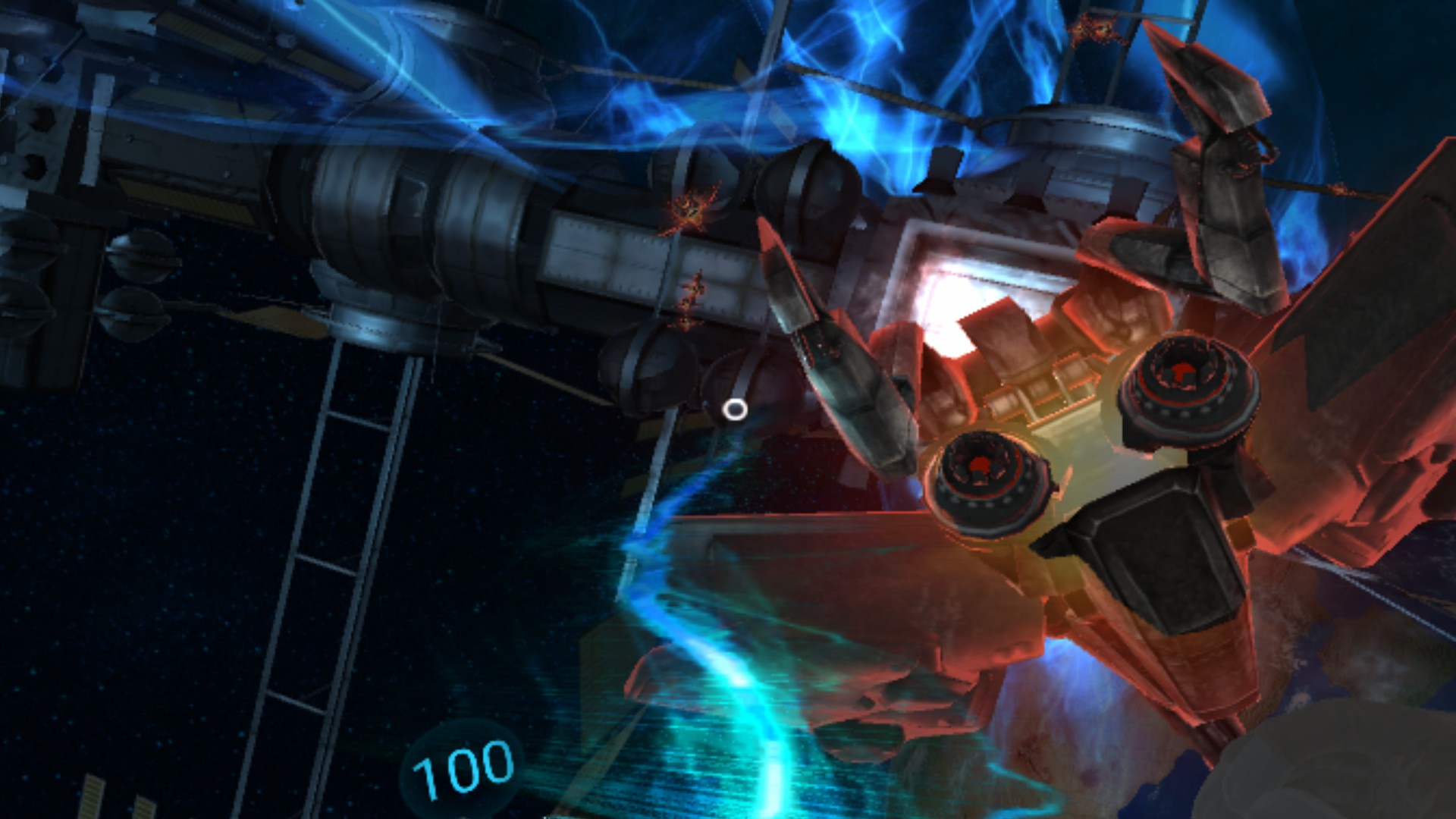 There are only five levels and, assuming you make it through the shooty bits, you can be done with the game in about half an hour. If you want the achievements and trading cards, however, you’ll need to leave it idling for about another two hours, which is a bit crazy. I don’t know if the developer originally intended for the game to be longer or just wanted to make sure that people would be outside of the two-hour Steam refund play-time window, but I’m guessing it’s the latter.

The store page lists Keyboard/Mouse as an input device supported by the VR implementation, but I couldn’t get them to do anything; my guess is that they’re actually not supported in the VR version at all. I also couldn’t get my opentrack-mapped XBox controller to do anything useful, so perhaps there is no input other than head tracking to aim. It’s also possible it’s a side effect of my weird VR setup. In any case, I was able to play through the whole game using only head tracking.

Far Space VR is a fun, but very short introduction to VR. On the one hand, the interactive movie parts are very nicely made and, I think, work really well, but on the other, the shooter parts are long and boring and not much fun at all. Given the price, though, it’s easy to recommend Far Space VR to anyone just starting out with Steam VR.

Note: I played this game using VRidge / Riftcat and an Android phone with Google Cardboard headset.