Accompanied by your mobster pal in CO-OP, indiscriminately mow down hordes of enemies.

It’s always Nazis or Zombies, why not both?

Guns Gore & Cannoli is a run & gun.There are platforms and you can double jump, but most importantly it is a frenetic action shooter in the vein of Metal Slug. Guns Gore & Cannoli 2 proposes to play as a mobster who opens fire on everything that breaths, or used to, such as Zombies. There are a huge variety of enemies, ranging from Zombies and the mafia to the German army in the midst of WWII. There is even a great scene with the landing on Normandy. It will take more than an army to stop our protagonist Vinnie Cannoli!

Just like the first game in the series Guns Gore & Cannoli 2 is playable in cooperative. But beware, there is a major difference between the two titles. The first one only allows local play on a single computer; the second title can be played locally with controllers, but also online with Steam! This changed the direction of the gameplay, as both players can now use their mouse. Thus, in the first game aiming is only horizontal. You were shooting right or left from the character. In the second game, you can aim everywhere around you, 360° of freedom. In turn, fights from the second game feature a lot of verticality. Platforming is required a lot more across the levels, as well as shooting enemies positioned at various angles on the screen. 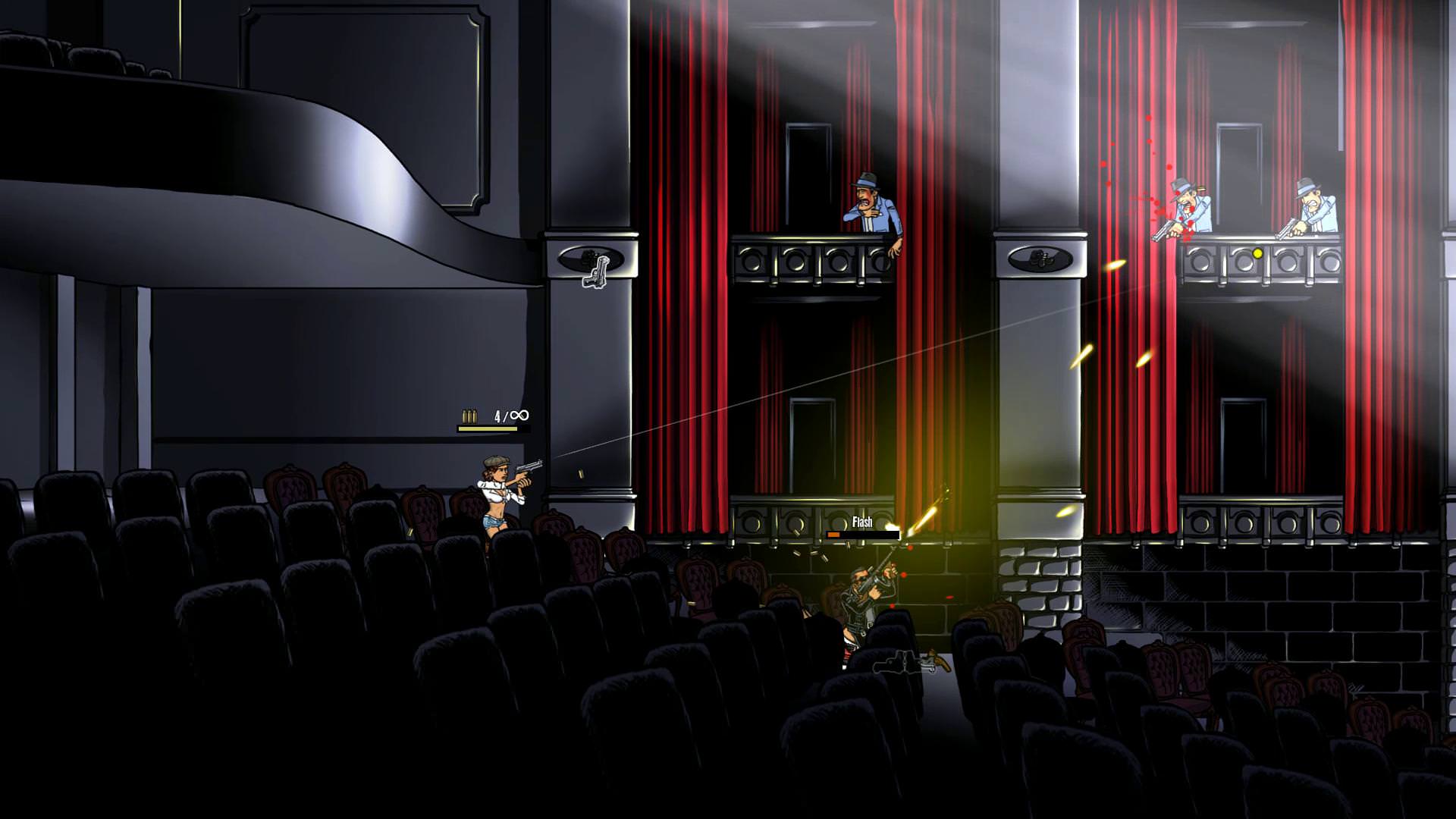 Overall, the weapons are all quite efficient and give a great feedback of destruction, mayhem, and gore, exploding the opposition into small chunks. Sadly, I just find it a bit less sadistic than the first game. There are a lot of different styles of enemies and backgrounds, which helps avoiding boredom to settle and player interest is constantly renewed. This game perfectly fulfills its mission as a violent and fun shooter. For a reason that I cannot fathom, grenades were present in the first title but are missing from the second one. If there is a third game in this series (I hope there will be!), I hope it will keep going in crazy territories with aliens and such. 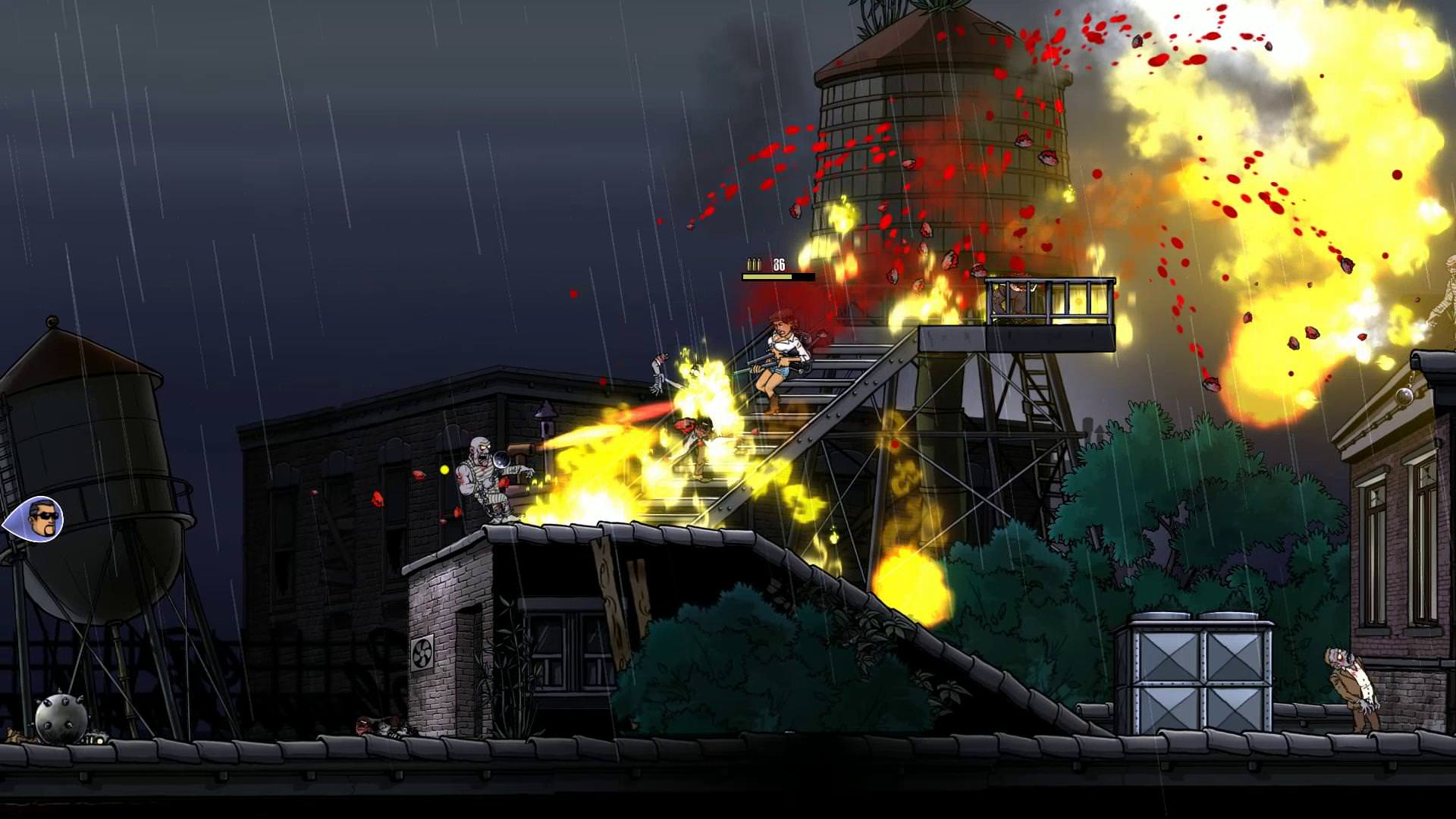 Enemy types and interaction can also vary, there are enemies that rush you, those that shoot from afar, those with shields, those with grenades, and so on. Thus, there are small tactical variations to spice up the gunfights, but although there is almost anything that a player can ask, it is still not exactly perfect. Indeed, the game is lacking a little something that Metal Slug had, and it’s a better management of pace and gameplay diversity. In Guns Gore & Cannoli, it’s always the same sort of similar gunfights even though they are intense and there are small variations. Entire sections follow a similar pattern, whereas Metal Slug was building each screen as an entirely different experience, and the titular vehicles were momentarily changing the feel of the gameplay. 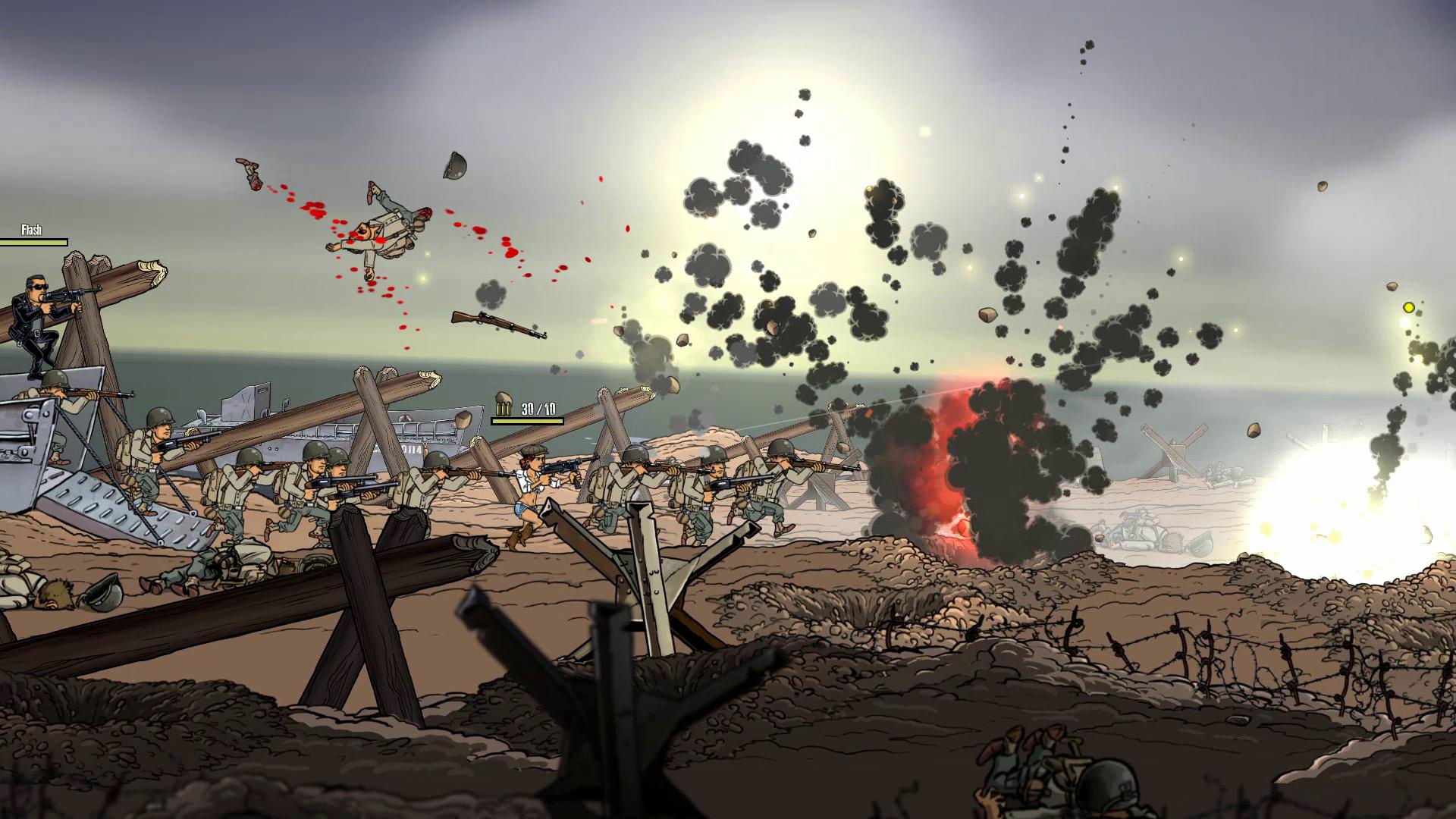 You have probably noticed from the screenshots or the video, but the graphics are great and very polished. It feels like playing inside comic books. The rest of the technical aspects are perfect and complete, there is everything we need, including rebindable keys. The only issue I encountered was when the person playing with me could not use the left click of the mouse in the menus, but it worked well once inside a game. The music did not impress me, I know it’s in tune with the era but it sounded like elevator music and did not support the action too well. 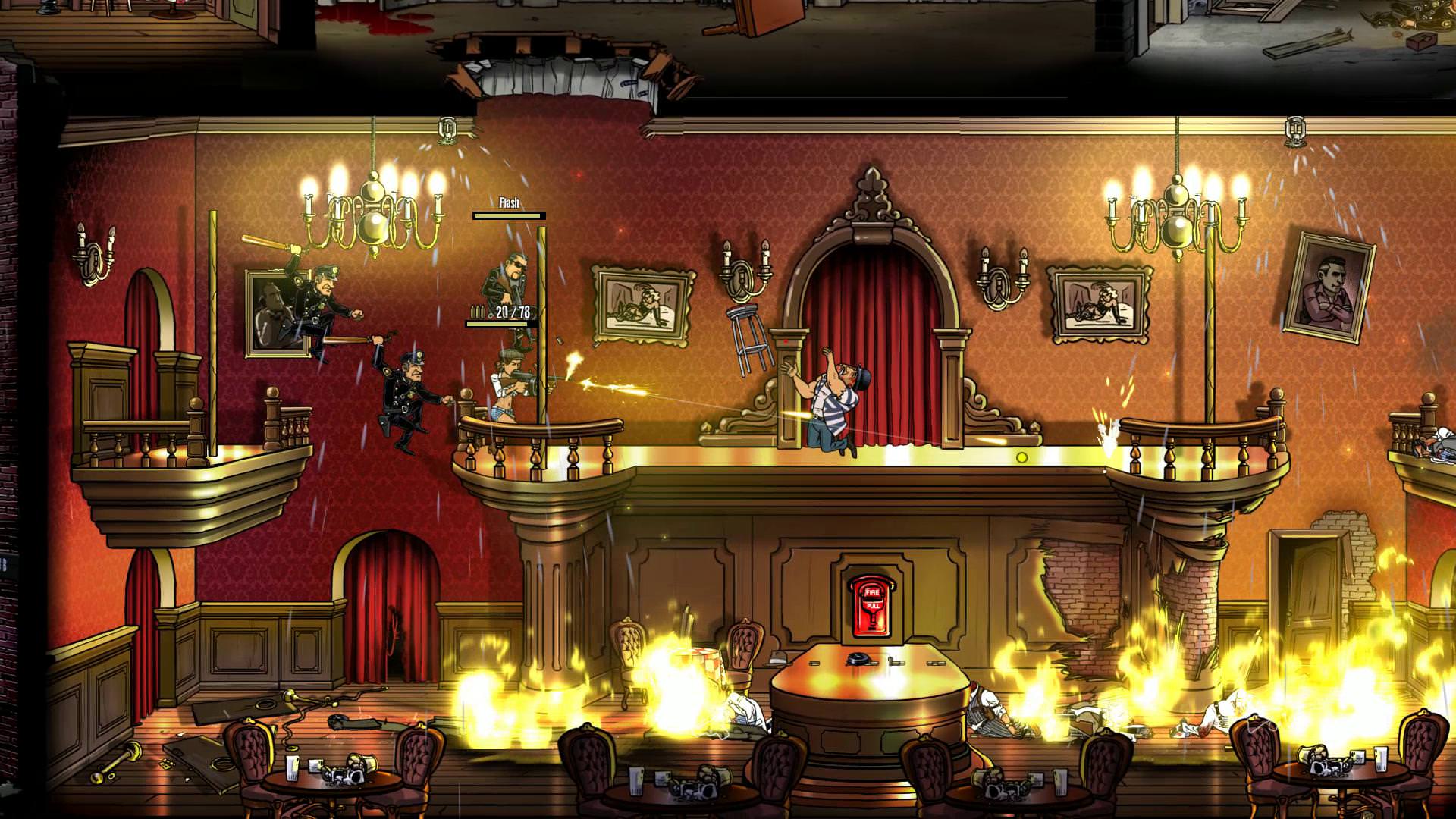 Since I mentioned playing with someone else, the game is largely directed towards action, and there are loads of checkpoints. It’s very accessible to casual players. Although, the boss fights can be too difficult since their life is doubled. I still had some trouble in the second game, when one of the players dies and respawns, the survivor loses half their health. Which meant that after dying over and over against a boss, my second player dropped my own life down to nothing. It was so low that a stray bullet was enough to kill me and trigger a restart of the whole fight. Thankfully, it is possible to disconnect a player, succeed in the fight then reconnect the player. Despite my difficulties I must admit that I liked that health points were shared between the players, it pushed us to care more about protecting each other. 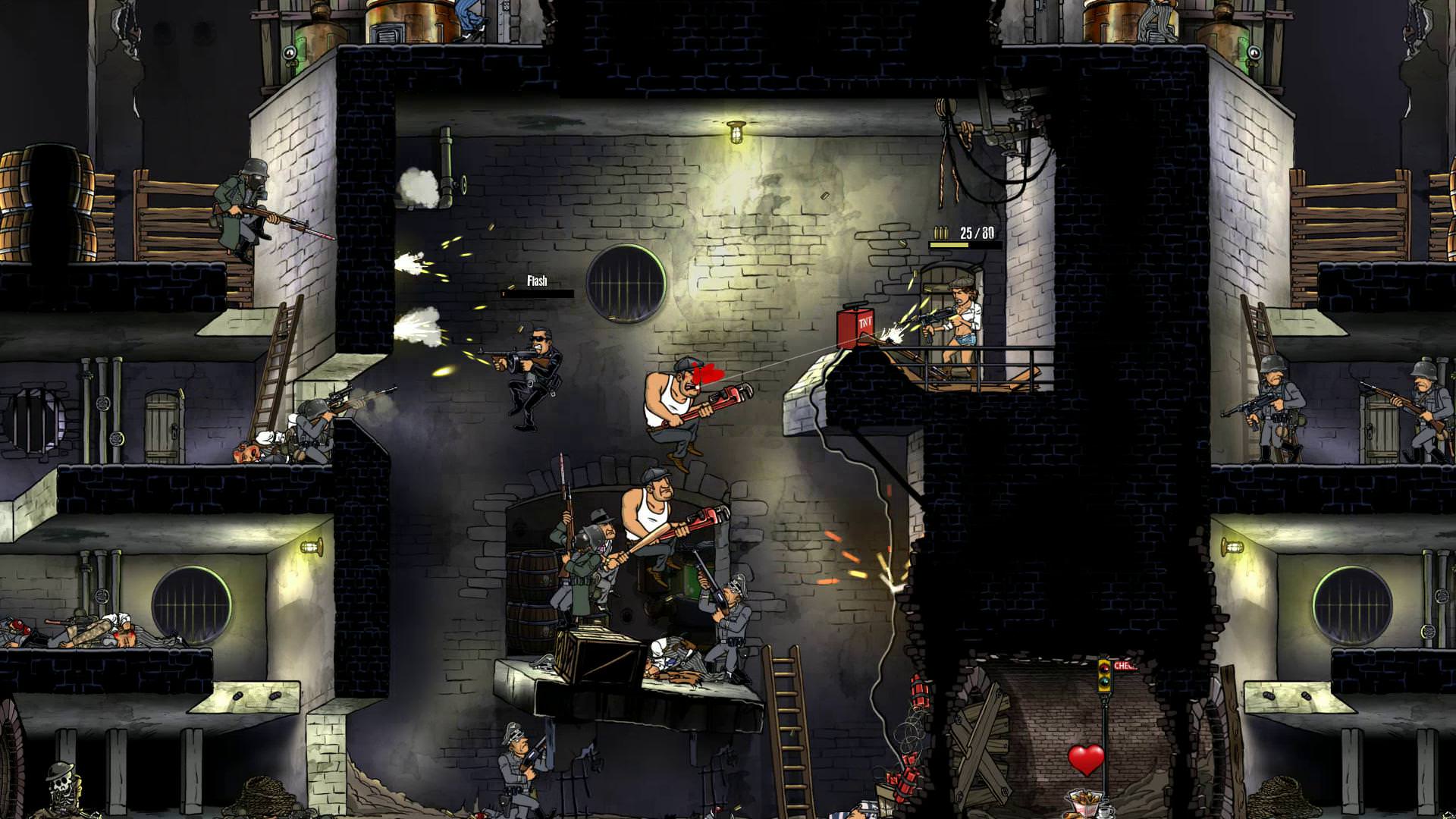 Overall, Guns Gore & Cannoli 2 is an excellent cooperative shooter, bringing online play and verticality to the series. It’s violent, it’s fun, and it’s very well done. Along with the first game, it is a must have for anyone enjoying side-scrolling action and cooperative play.