My Lovely Daughter introduces an amnesiac alchemist and his dead daughter, and piles of dead homunculi, betrayed by the father that they thought loved them.

My Lovely Daughter is the third Steam title from GameChanger Studio, published by Toge Productions and Another Indie.

In My Lovely Daughter you assume the role of Faust, an amnesiac alchemist who wakes in a somewhat dilapidated mansion / castle not far from the village of Salach, a haven for criminals, outcasts, and other unsavoury types.

Exploring the large house you soon discover the recently dead body of a girl. You remember she is your daughter, Arhea, though you’ve no idea how she died. You also discover what you know to be her disembodied soul in a special container nearby, along with some brief research notes on soul removal and insertion, and the raising of alchemical homunculi.

Determined to save your daughter before she decays and you lose her forever, you set about raising and sacrificing all manner of homunculi in an effort to restore her soul to its former state, and thence to her body.

The game is presented very simply, but quite beautifully, with hand-drawn graphics in a consistent style from a rather small, but appropriate mostly neutral colour palette. The whole game is played on only a few screens, with a number of pop-up dialogs used to allow choices and control and to present information to the player. 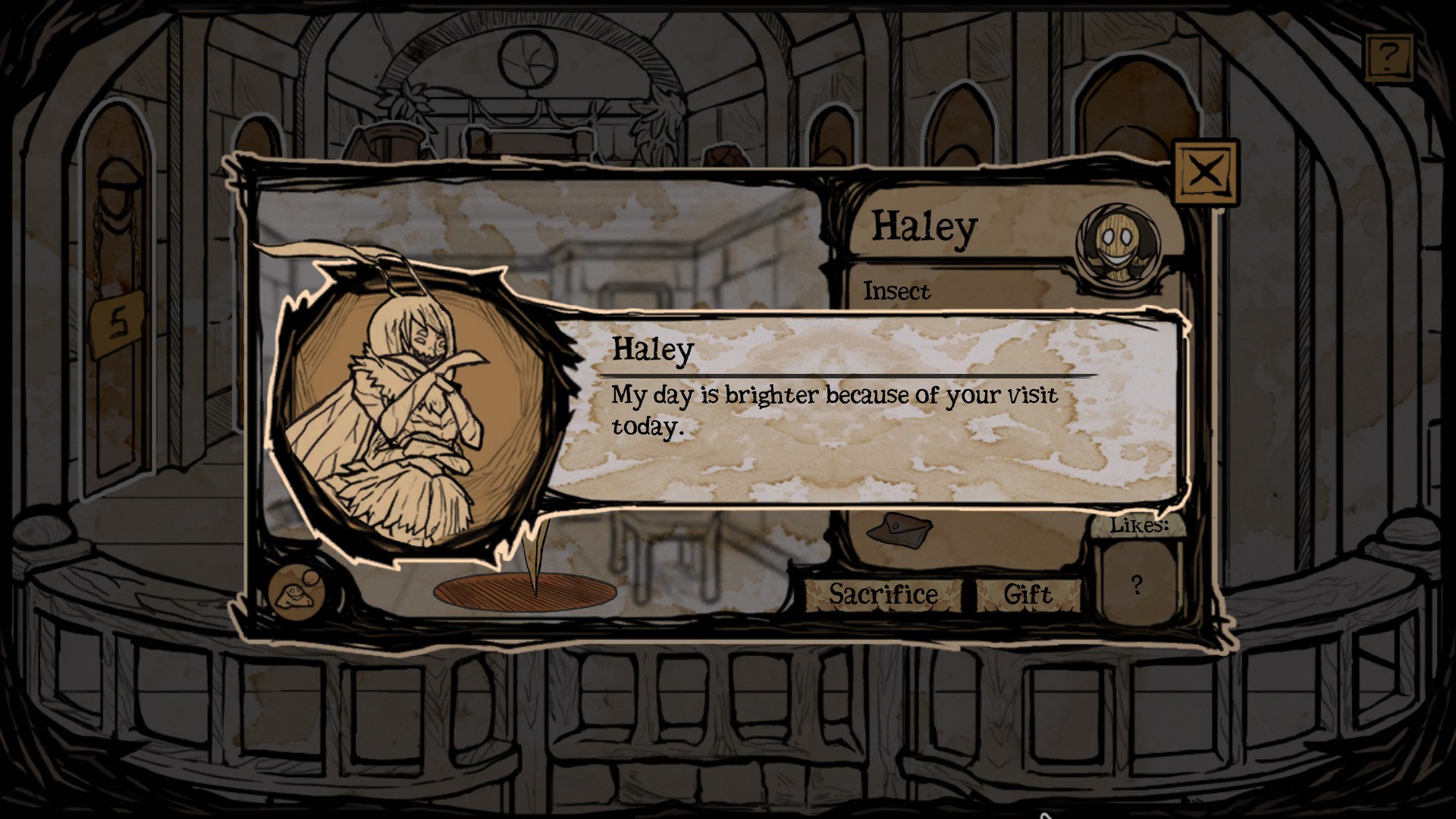 Background graphics portray the rooms of Faust’s mansion and the map of the nearby village in a simple sketched style using minimal colours. Some flavour animations are included to help set the scene and these add a nice touch of extra atmosphere to the game.

Each basic homunculus type has a unique personality that comes across well in the scripted dialog and letters they write to you, as well as in their sketched, cartoon-like character art. It’s hard to not become attached to some of them as they learn and grow through their few short weeks of life before you cruelly butcher them for resources and soul affinities. The script is very well written, both thematically and grammatically. 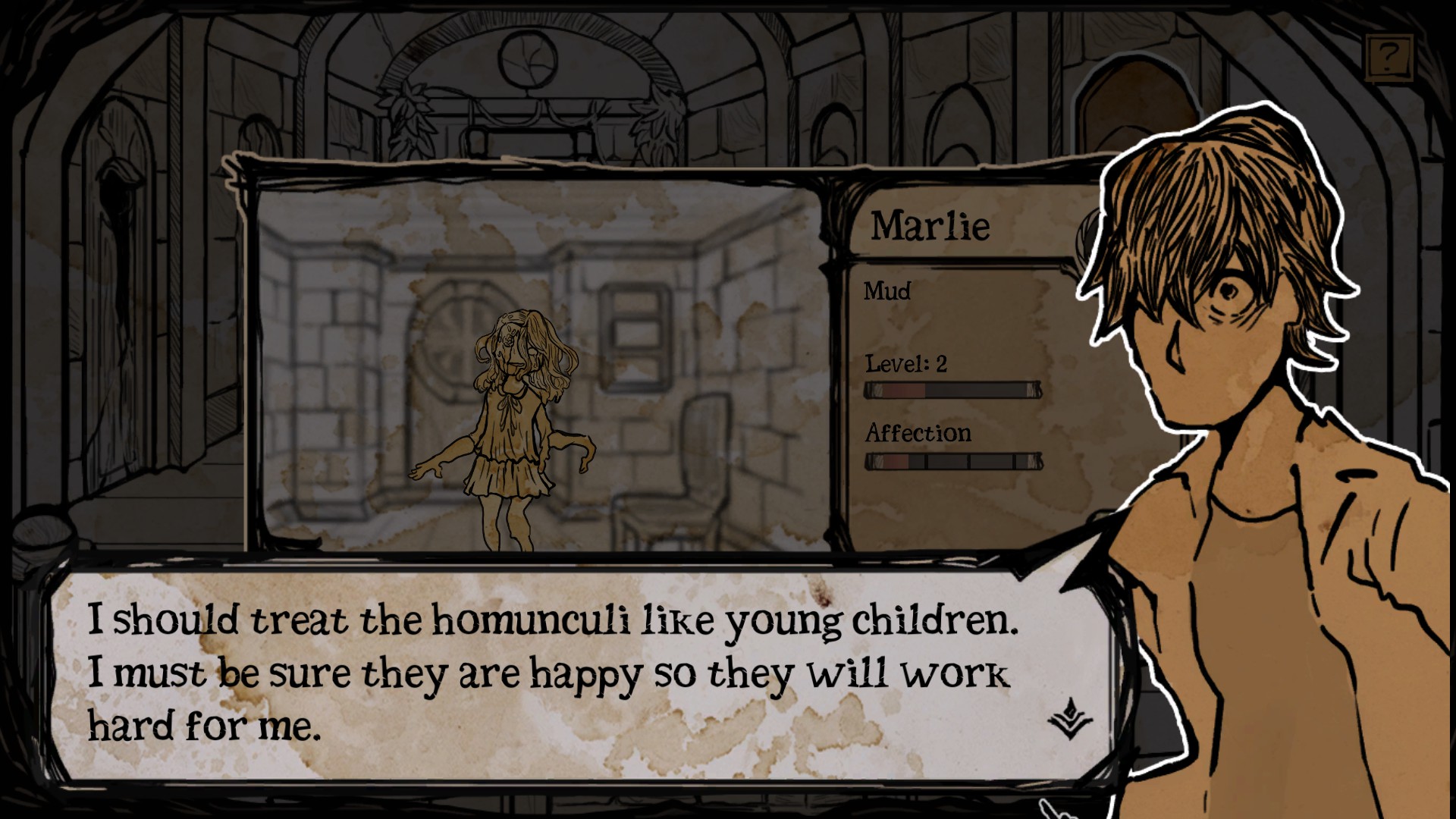 The interface is very easy to use. The game includes a brief guided tutorial section when you first begin, as well as on-screen help available for most dialogs and screens. The village interface could use a couple of tweaks to reduce pointless clicking, though: displaying available homunculus portraits (with affinity tooltips) in the job selection dialogs would prevent needing to swap back to the homunculus screen over and over, and similarly displaying available resources and those already assigned to contracts on the contract selection screen would prevent needing to swap back to the inventory screen all the time to evaluate contracts. But these are only minor issues.

Music is haunting and lovely, though can be repetitive with only a few tracks available. Sound effects are few and far between, too, but are appropriate for the game. There are no voices, but the crying and screaming when you murder one of your girls is truly horrifying … and heart breaking. 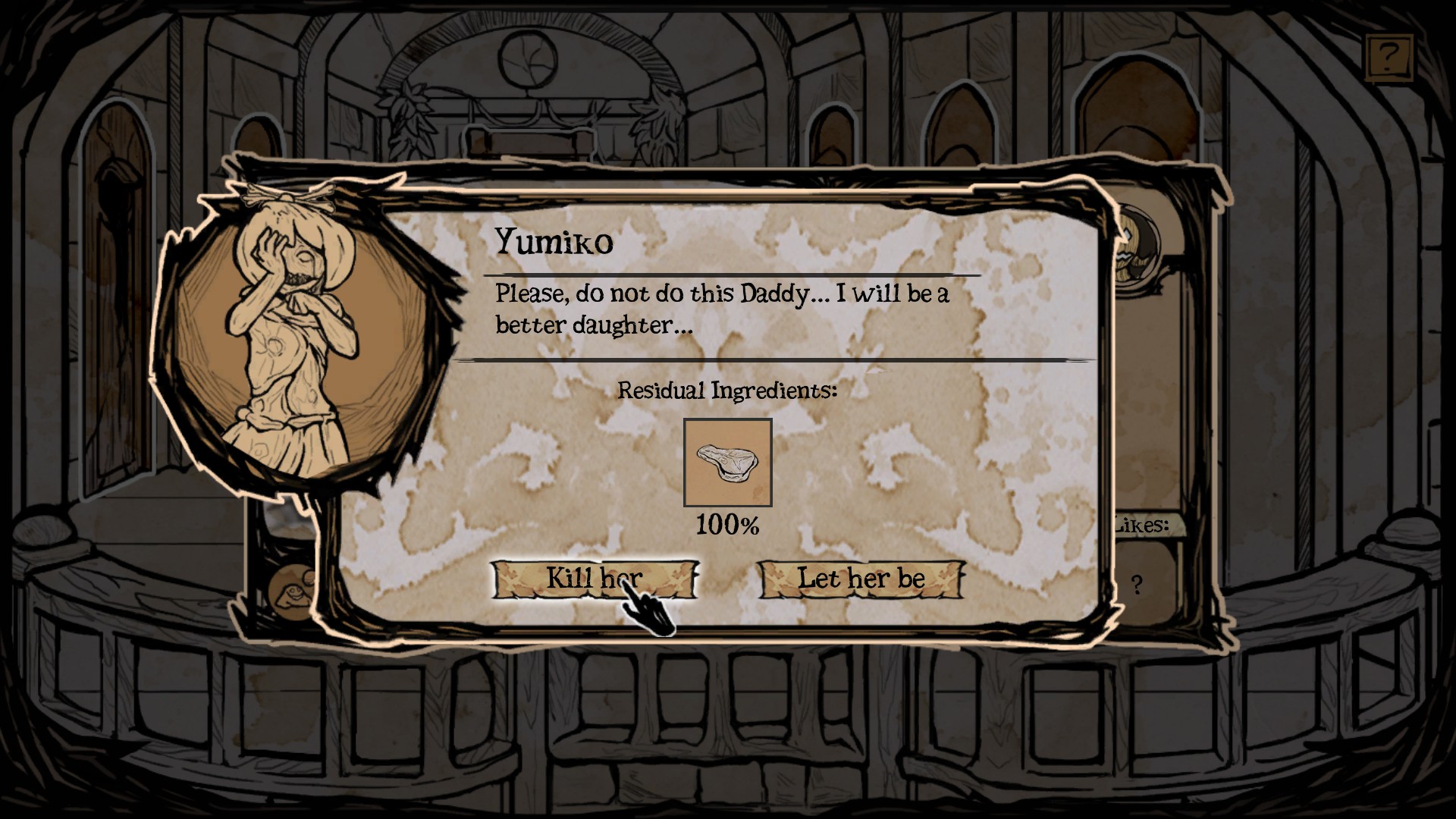 The core gameplay loop in My Lovely Daughter is exceptionally simple. You begin each week in your castle, where you can create, sacrifice, or interact with your homunculi; consult your experimental notes and journal; and talk to your dead daughter and examine her soul. Then you head into Salach for the rest of the week. 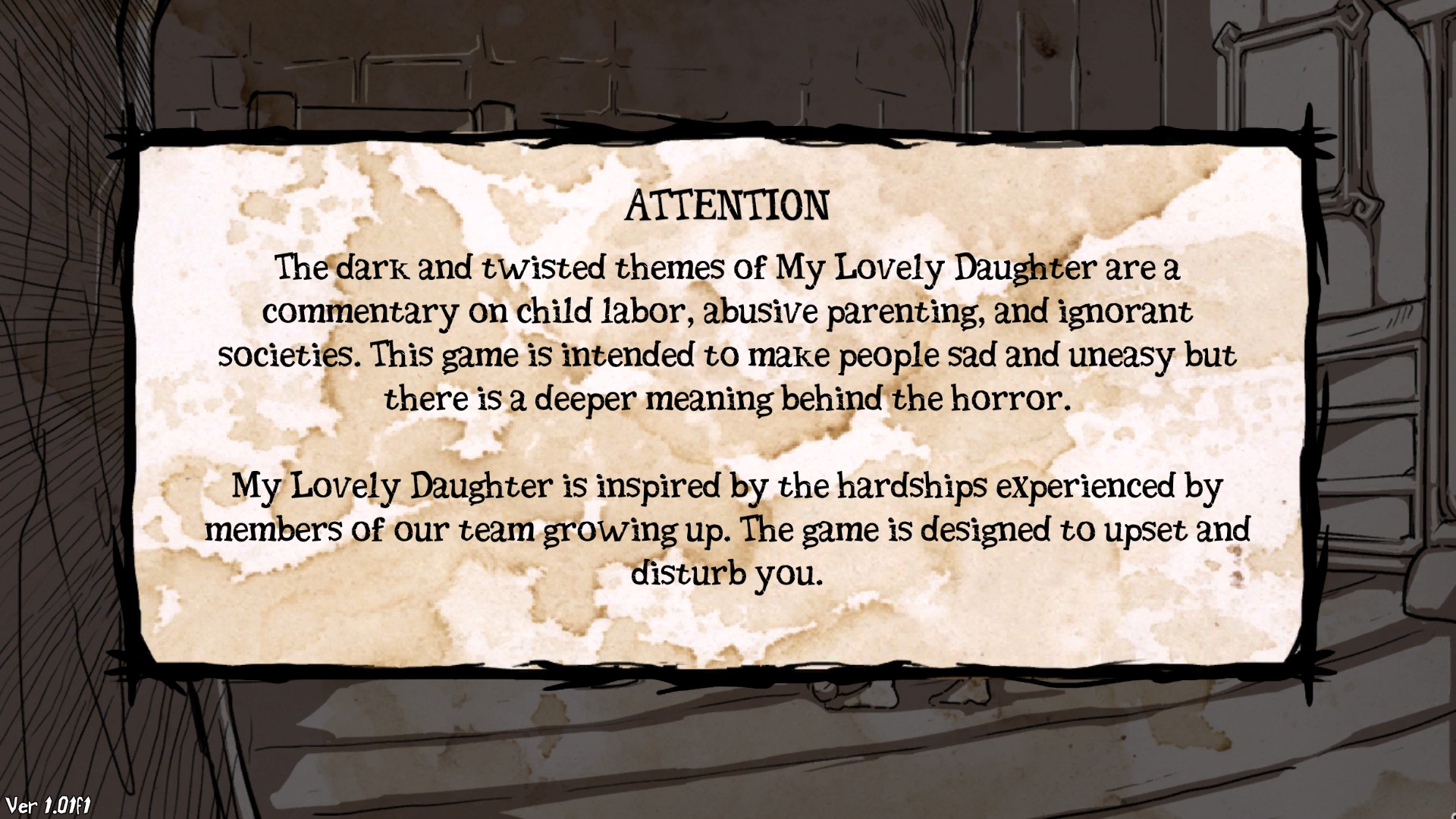 In the village you click on locations on the map to buy basic homunculi materials, gifts, and a few special upgrade items from the local shop; talk to the locals; negotiate contracts to deliver higher-tier materials; and, most importantly, send your homunculi out to do jobs for the villagers. Then you return back home for the next week.

These jobs provide you with income in the form of gold and also increase the homunculis’ experience, while usually also decreasing their intimacy with you (they don’t like being treated like slaves). Each job is also geared towards one of the four affinities which a homunculus may have: anger, sadness, fear, and joy. Give a homunculus a job that matches her affinity and she’ll do better and dislike you less; give her one that opposes it and she’ll do poorly and hate you more. 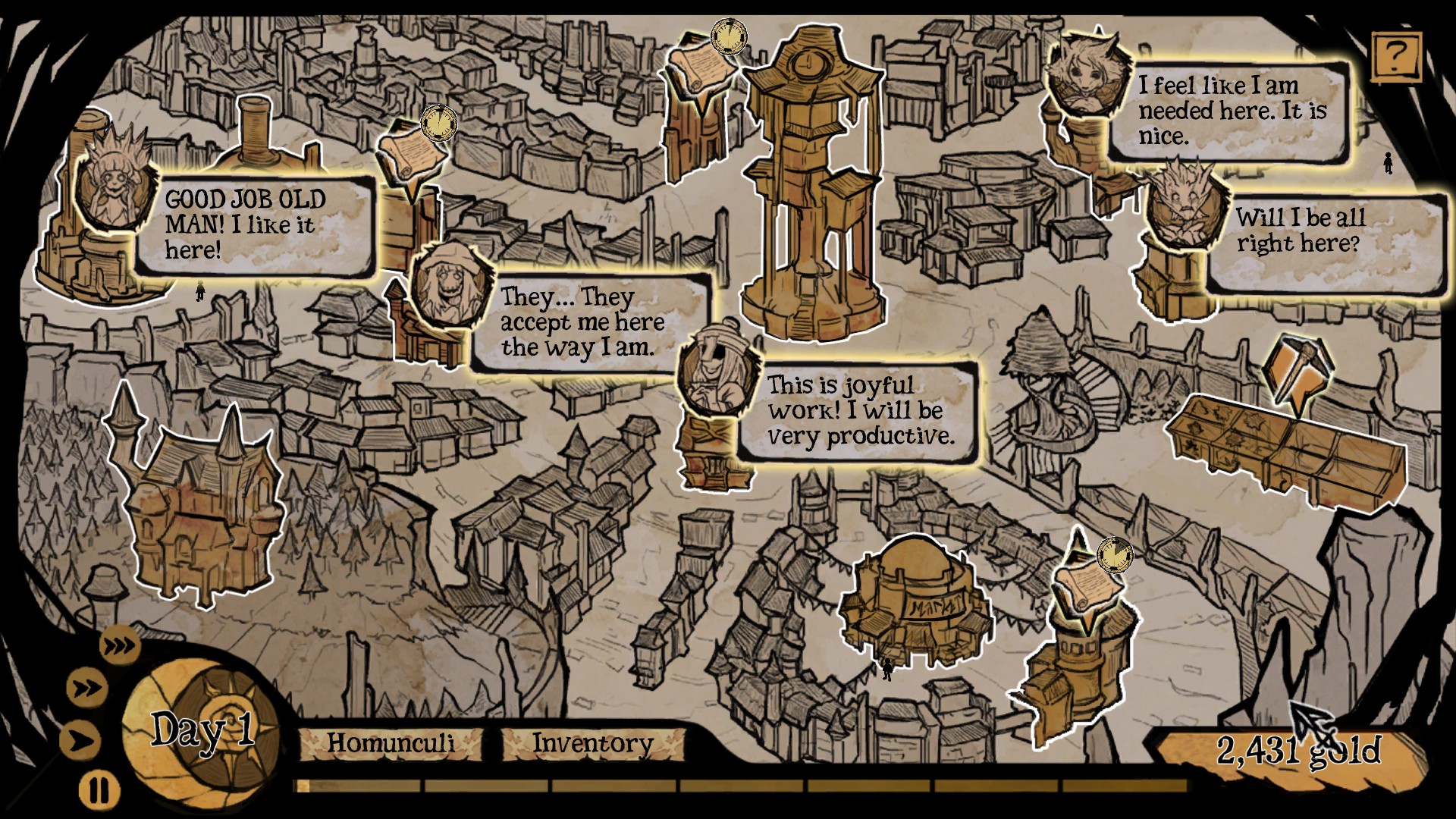 Every fourth week there is a full moon, which allows you to perform the magical ritual that may restore your daughter’s soul. In order for this to have a chance of success, however, you must sacrifice your hard-working, and sometimes even loving, homunculi to imbue Arhea’s soul with their affinities. If you get the right affinity balance then your daughter is returned to you and it’s game over. Otherwise your poor homunculi died for nothing more than a narrowing down of the affinity ranges for your next attempt; Arhea’s soul is once more stripped of all affinities and you start the next month from scratch.

Sacrificing a homunculus not only imbues your daughter’s soul with the homunculus’s affinity, it also provides a chance to receive higher tier materials, which you can then use either to fulfil contracts with the villagers or to create other homunculi. A higher-level homunculus not only provides more affinity points to Arhea’s soul when sacrificed, but also has a greater chance of dropping higher-tier materials. 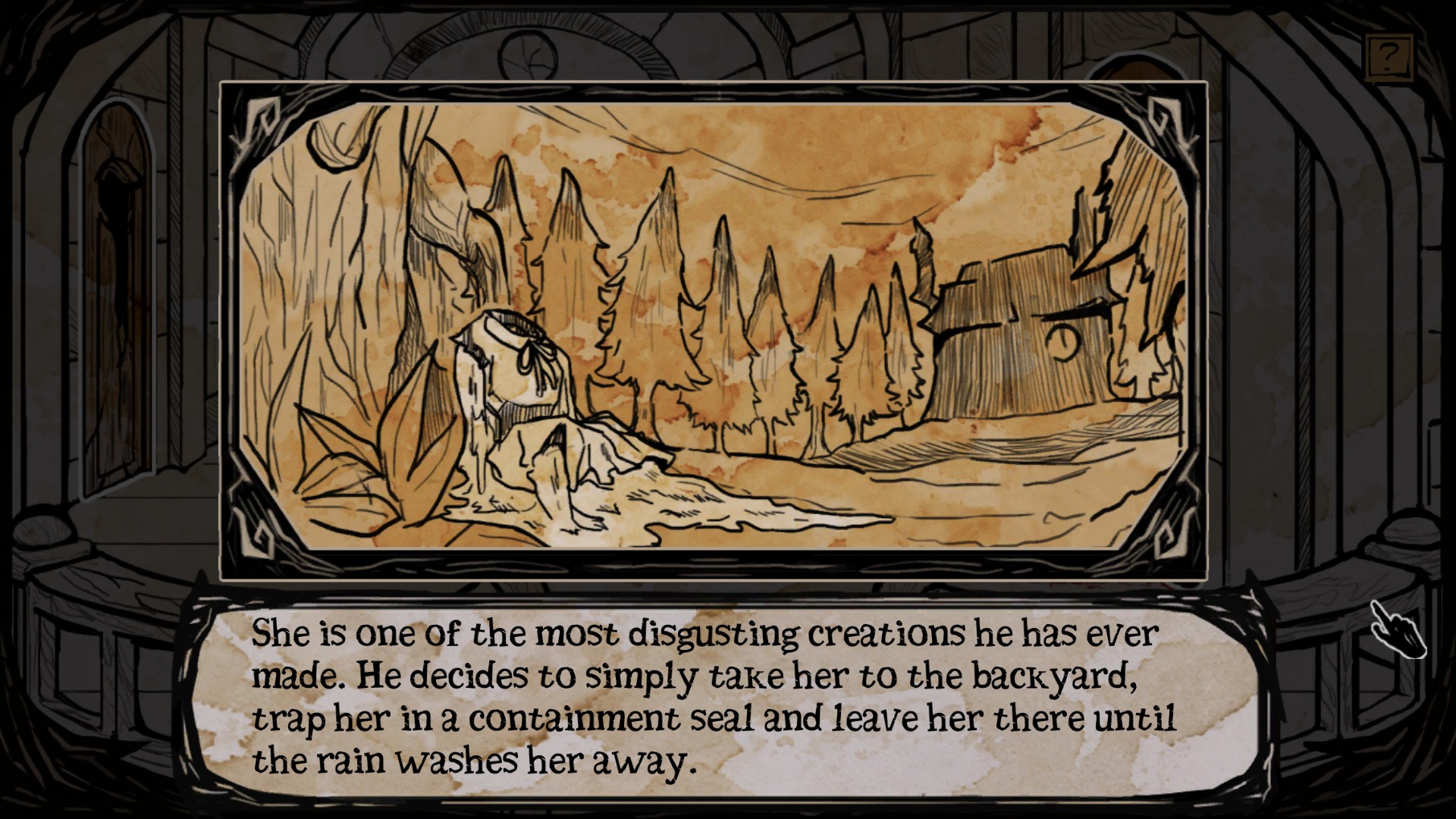 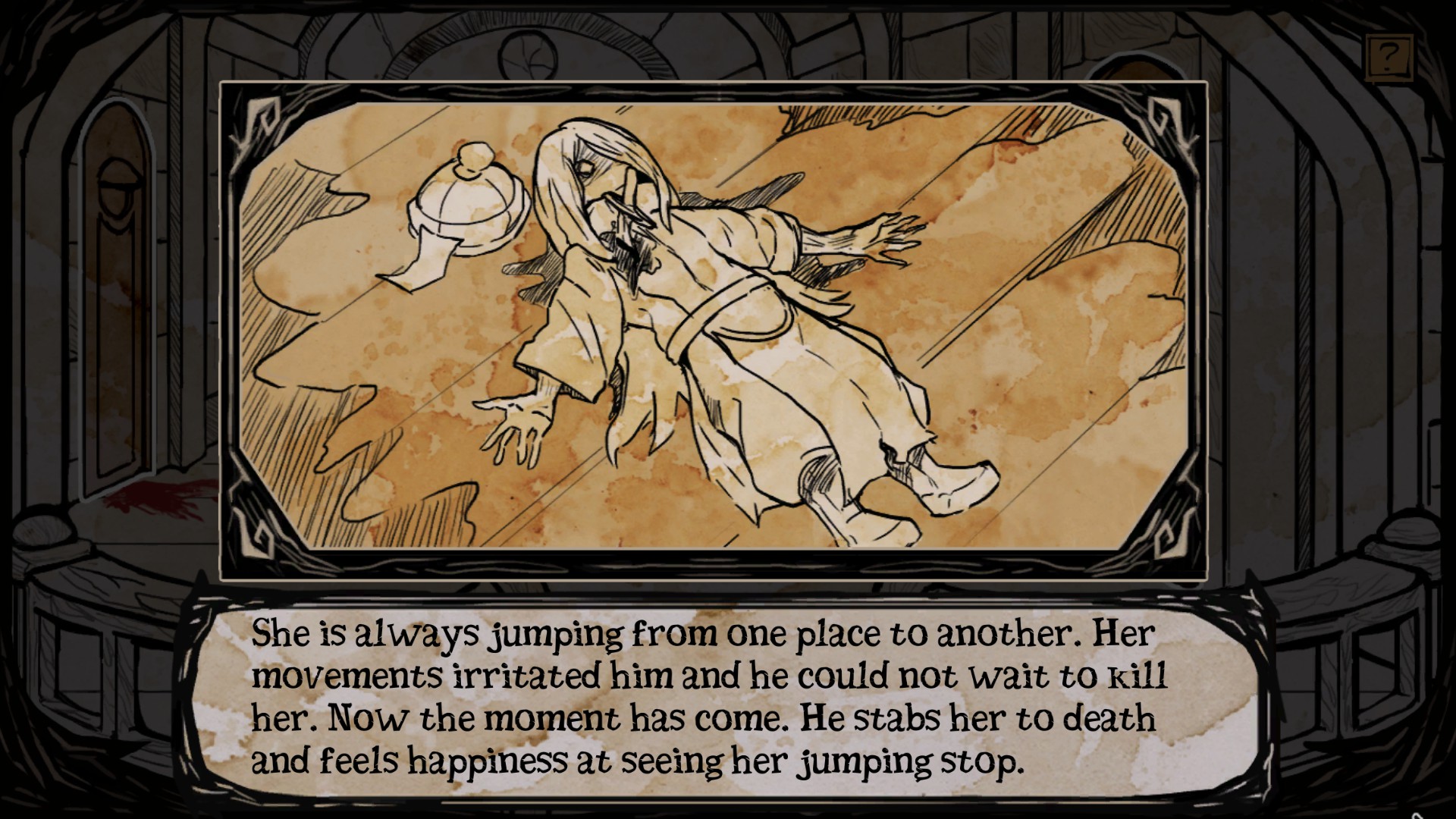 There are something like 30 different homunculus types, but if you look at it from a purely practical point of view, then you really only care about their affinities, of which there are only four.

And that’s it. The task of balancing income against the costs of homunculus creation and intimacy maintenance is an easy one, particularly as the game appears to have no time limit — which is a very good thing. The mechanics are very simple, but the story and characters bring the game to a weird sort of life, and they do an excellent job of it.

The game’s challenge isn’t so much a gameplay challenge as an emotional one. While it may be easy to cast off your grumpy failed Enmity homunculus to free up her room and scavenge what meagre resources you can from her corpse, it’s much less pleasant to do the same to a beautiful, sweet Titanium homunculus who’s been writing you letters and whom you’ve been talking to every week and showering with gifts, especially when she pleads for her life and starts crying. 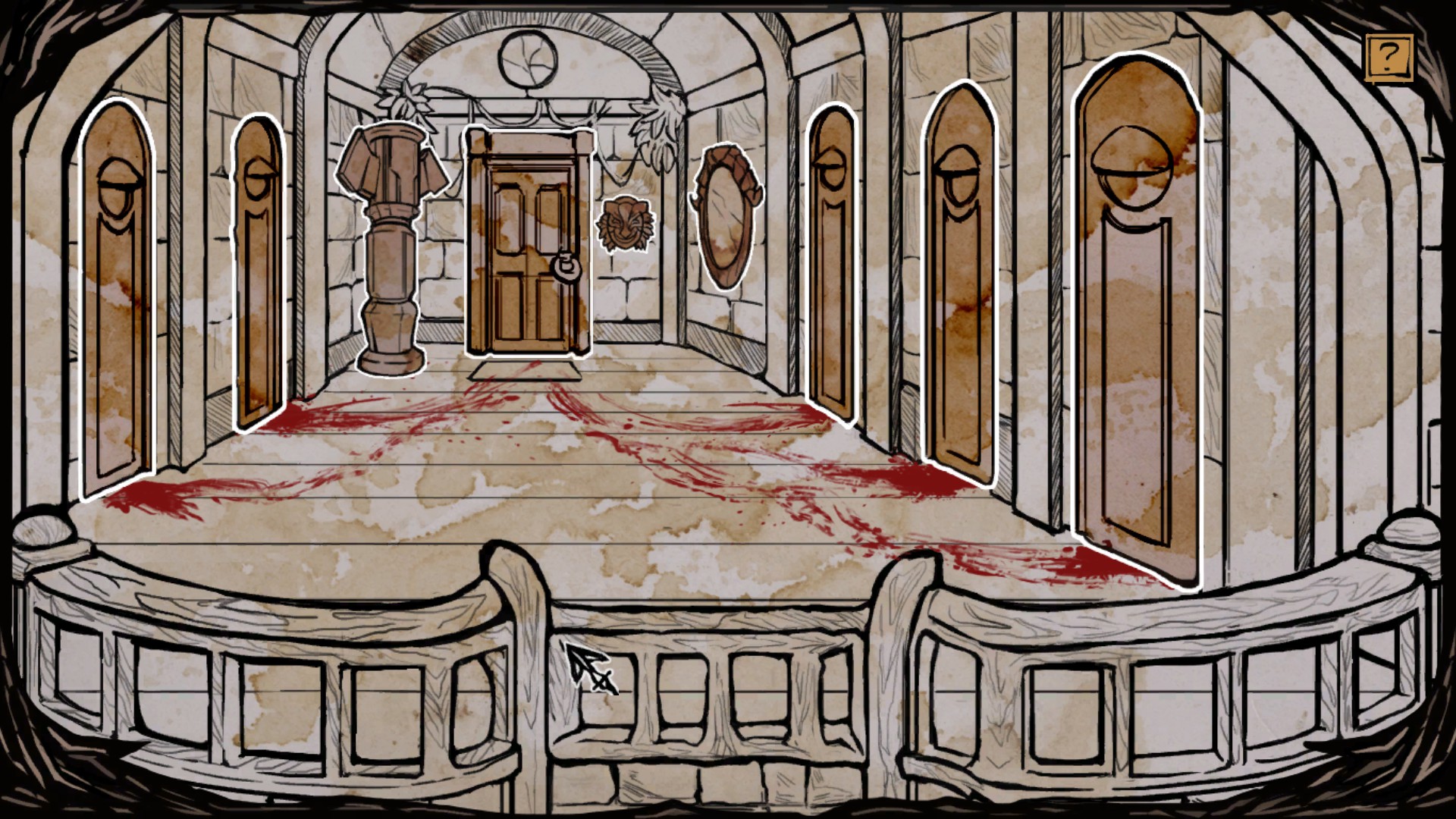 The life of an alchemist is a tough one, indeed.

When you begin My Lovely Daughter you’re greeted with a screen explaining that, though it is a work of fiction, it is dark and depressing, and may make you think and feel certain things. The gameplay is extremely simple and becomes repetitive quickly, but the story and characters carry the game through to its bittersweet end.

My Lovely Daughter is a very simple game that only takes a handful of hours to complete, but will haunt you for much, much longer.