Soulblight shows a lot of promise, but ultimately it becomes a chore.

Soulblight is the debut Steam title from developer, My Next Games, published by Movie Games S.A..

Soulblight tells a typical fantasy quest-to-save-the-world story — albeit with some interesting, but ultimately irrelevant technology — in a very disjointed and confusing manner. I’m not sure if something’s been lost in translation or if it’s intended to be mysterious, but I found it frustrating and pretentious, to the point where I lost interest in what the game was telling me.

From what I can gather, you play some sort of unique hero-type character, fated by the crystal attached to your arm to be the one to remove the blight that has infected the Soul Tree: the source of all life in the world. There’s some weird sort of religious group that resurrects you when you die and transports you to a nearby sanctuary, as well as providing you with mysterious messages about your quest, too.

Anyway, you enter the great citadel that was originally created to protect the Soul Tree, but which has now become its dank prison, then hack your way through countless enemies and try to reach the Tree before it’s too late for everyone. Or something like that.

The game has quite pretty world graphics, but they often get in the way. You play from a top-down camera over which you have no control; it pans, zooms, and rotates of its own accord, keeping your character in the centre of a view that’s usually zoomed in too far to get a good picture of what’s around you. But the levels do look interesting and colourful, with nice lighting and special effects. 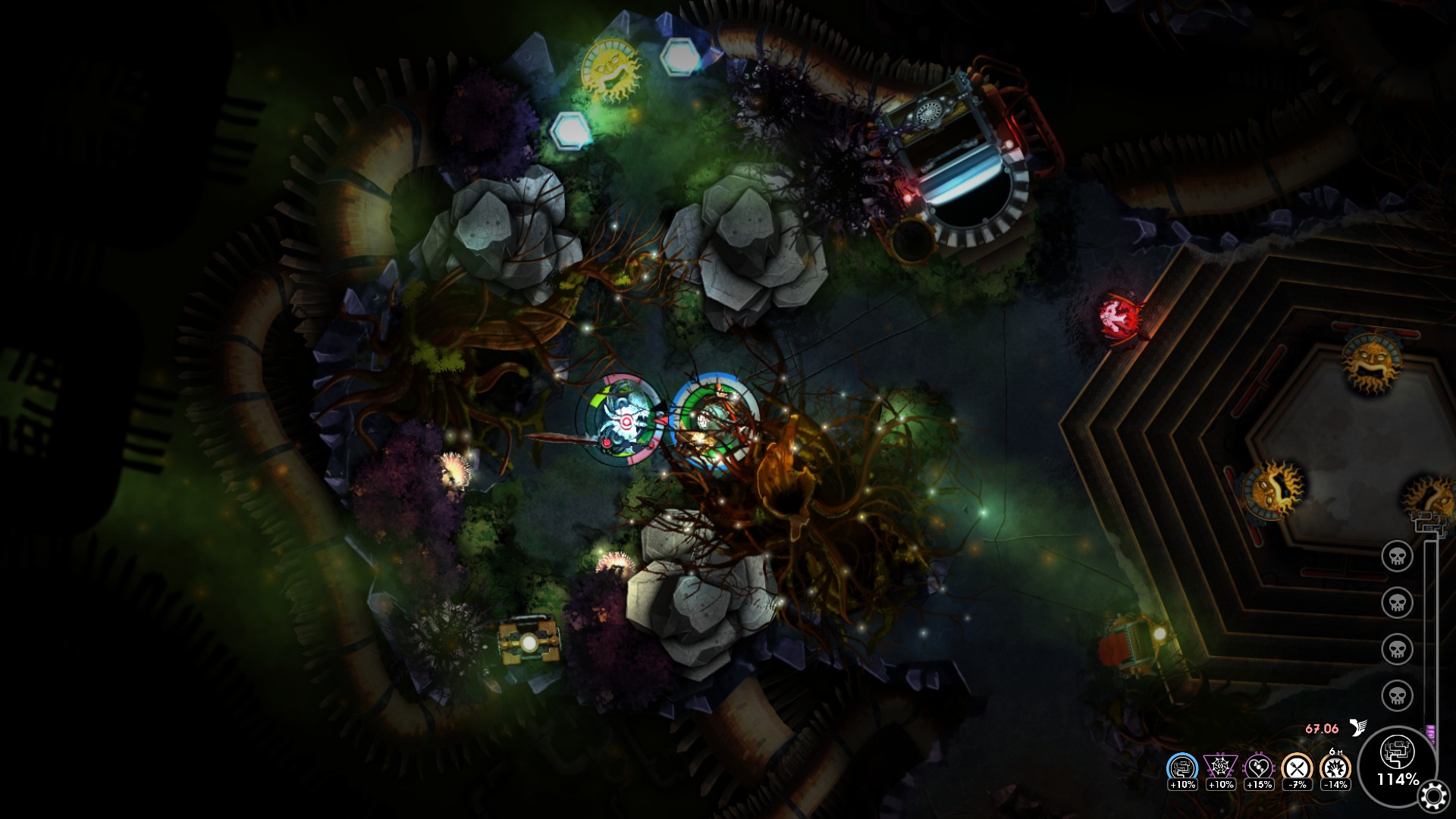 It’s hard to make characters in a top-down recognisable and it’s unfortunate that the artists haven’t done a great job here. Characters look like blobs that are mostly indistinguishable from each other. Animations are okay, but nothing spectacular. The character graphics are poor enough that you need a little triangle showing which way you’re facing, but even then with enemies sometimes you can’t tell unless you go into sneak mode to see their vision cones.

The in-game interface is unique, but not in a good way. In my first review draft I called it ‘terrible’, but I’ve grown more used to it since then; now it’s merely annoying. The lack of explanation about what most of it does and the weird inconsistencies where sometimes you have to press a button, sometimes hold it down, and sometimes hold it down while moving something else or pressing another button, make it hard to get used to. But it’s functional once you’ve worked it out. 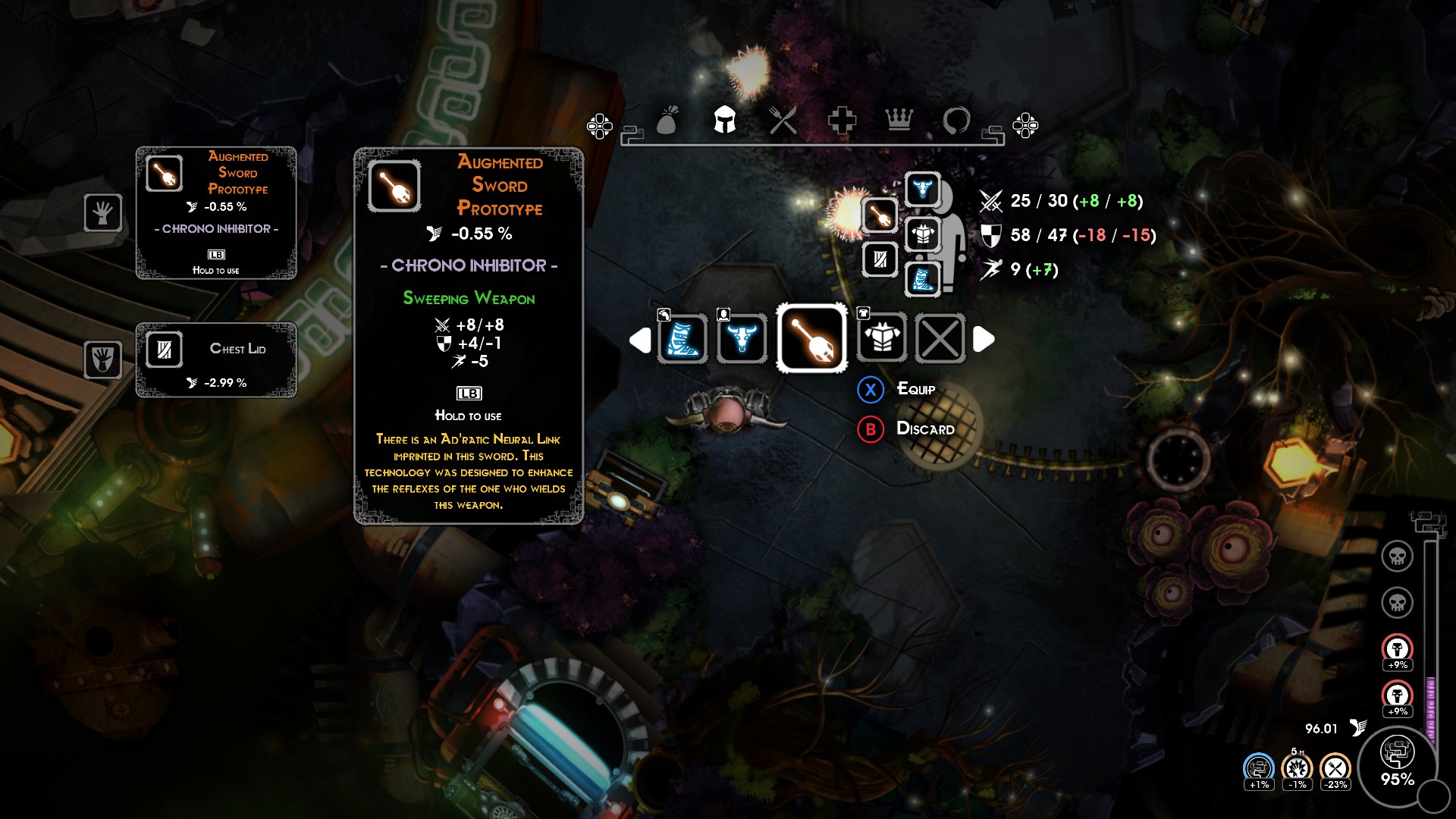 Sound effects are great, with melee combat bashes, clangs, and crashes sounding convincing, though a few more grunts or cries of pain wouldn’t go astray. Music, too, is very good: dramatic fantasy tracks that fit the environment perfectly. There are no voices in the game, but there’s a lengthy spoken introductory video with speech over two-dimensional hand-drawn art that explains the background, however, the speaker has an accent and mumbles strongly, and with no subtitles it can be quite hard to work out what she’s saying.

The script is mostly well written from a grammar point of view, with only a few more advanced errors and some slightly oddly worded lines here and there. 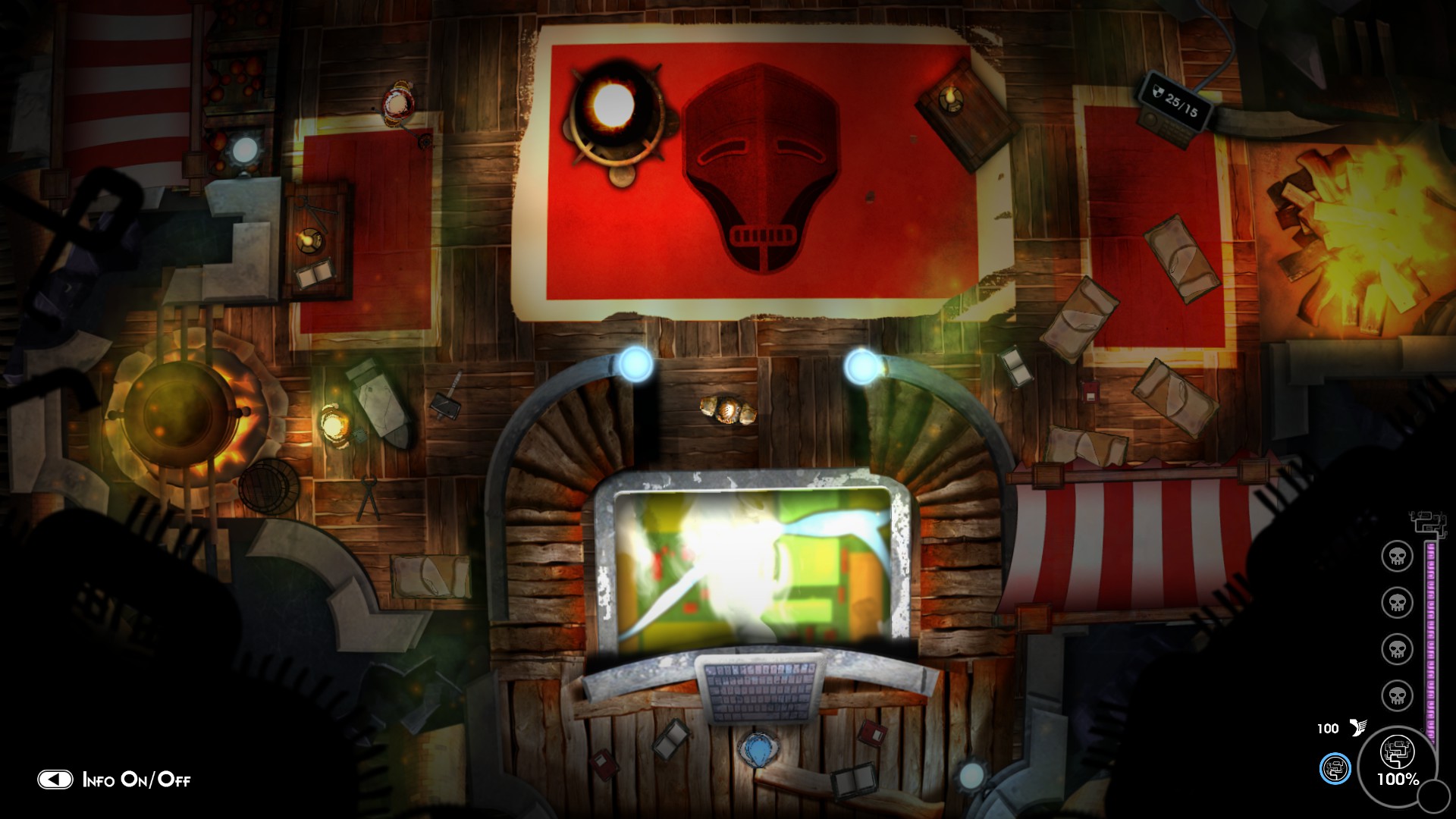 First of all, the game’s first loading screen says “Best played with a controller”. Pay attention to this! Mouse and keyboard controls are absolutely woeful. After my first abortive attempt I plugged in my controller and restarted the game (it didn’t pick it up until a restart) and was relieved that controls were somewhat better, but still disappointed at the clunkiness of it all. There’s also no way to remap controls.

From the screenshots you’d be forgiven for thinking that Soulblight is a twin-stick shooter. It’s not. Rather, it’s a single-stick brawler with rogue-like elements, including procedural generation of levels, loot, enemies, etc, but not, unfortunately, bosses or ‘taint’ selections. Given that the core of the gameplay is wandering about and beating up on enemies, then, it’s a shame that combat is just so … awful.

The game has this weird concept of ‘grip’, which you use to entrap your enemy. Every armour and weapon has two ratings, one for normal attacks and one for grip attacks, the latter usually being the higher, for weapons at least. That’s all fine and mildly interesting, if a bit odd, but it’s just implemented so badly that combat becomes a chore: something to avoid, rather than to relish. 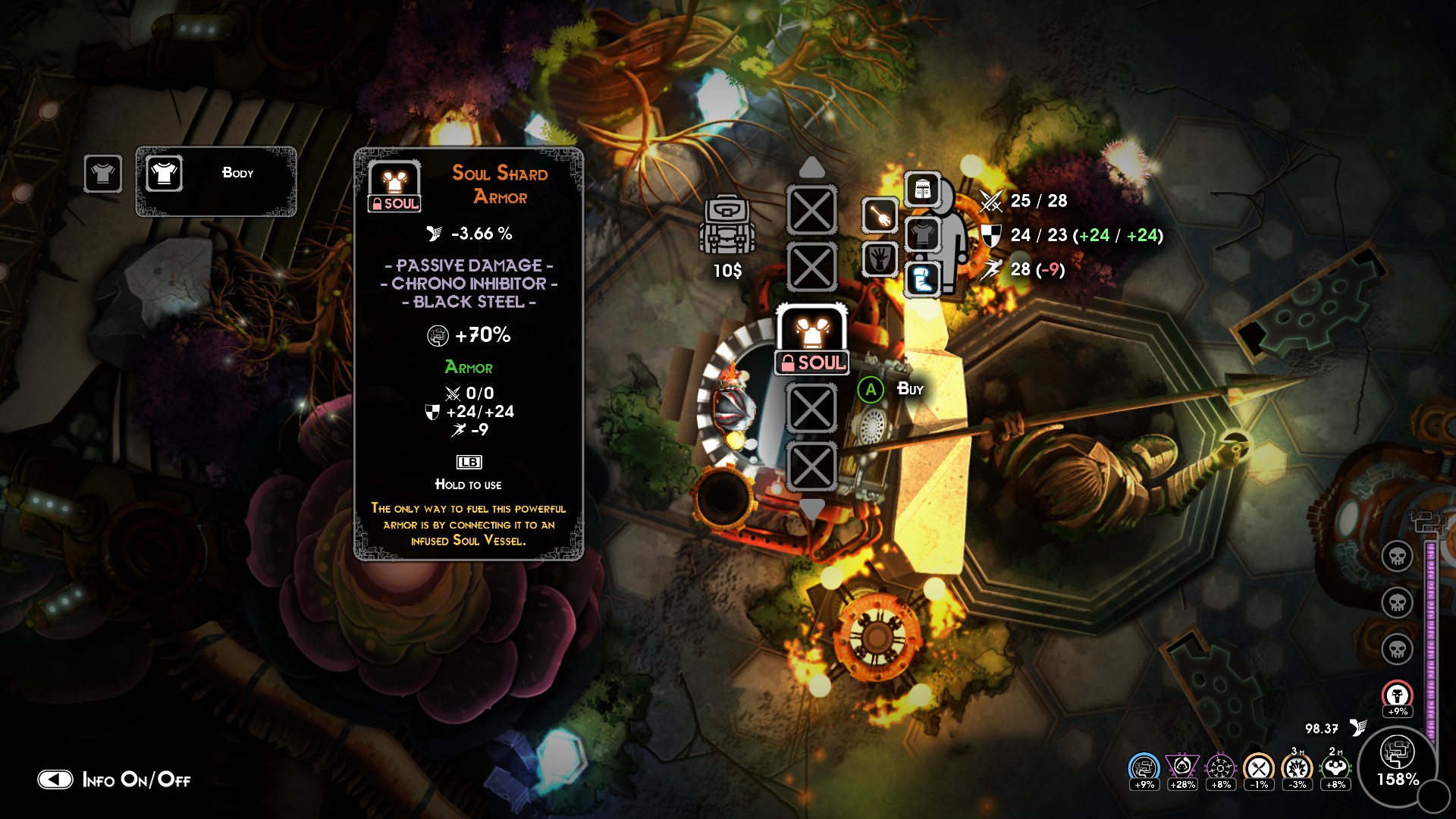 Your character reacts like an invalid, turning and moving at a pace that even your slowest enemy can easily catch you. You also have very limited stamina, so after a few swings of even the lightest weapon you’re left defenceless. You can dash away or block, but these are useless against all but the weakest enemies, making the touted tactical combat degrade into a roshambo encounter. Against one or even two enemies this is winnable, but come up against a larger group, or any of the game’s bosses, and it’s game over before you can say, “Oh, my knee!”

To help (or hinder) you in this frustrating combat are various bonuses and penalties. Hunger, remorse, taint bonuses or penalties, and injuries, among other things, all contribute to your overall modifier, which determines how much damage you inflict and take. These modifiers aren’t explained well, if at all, but unlike the story, it’s quite fun learning what they do. 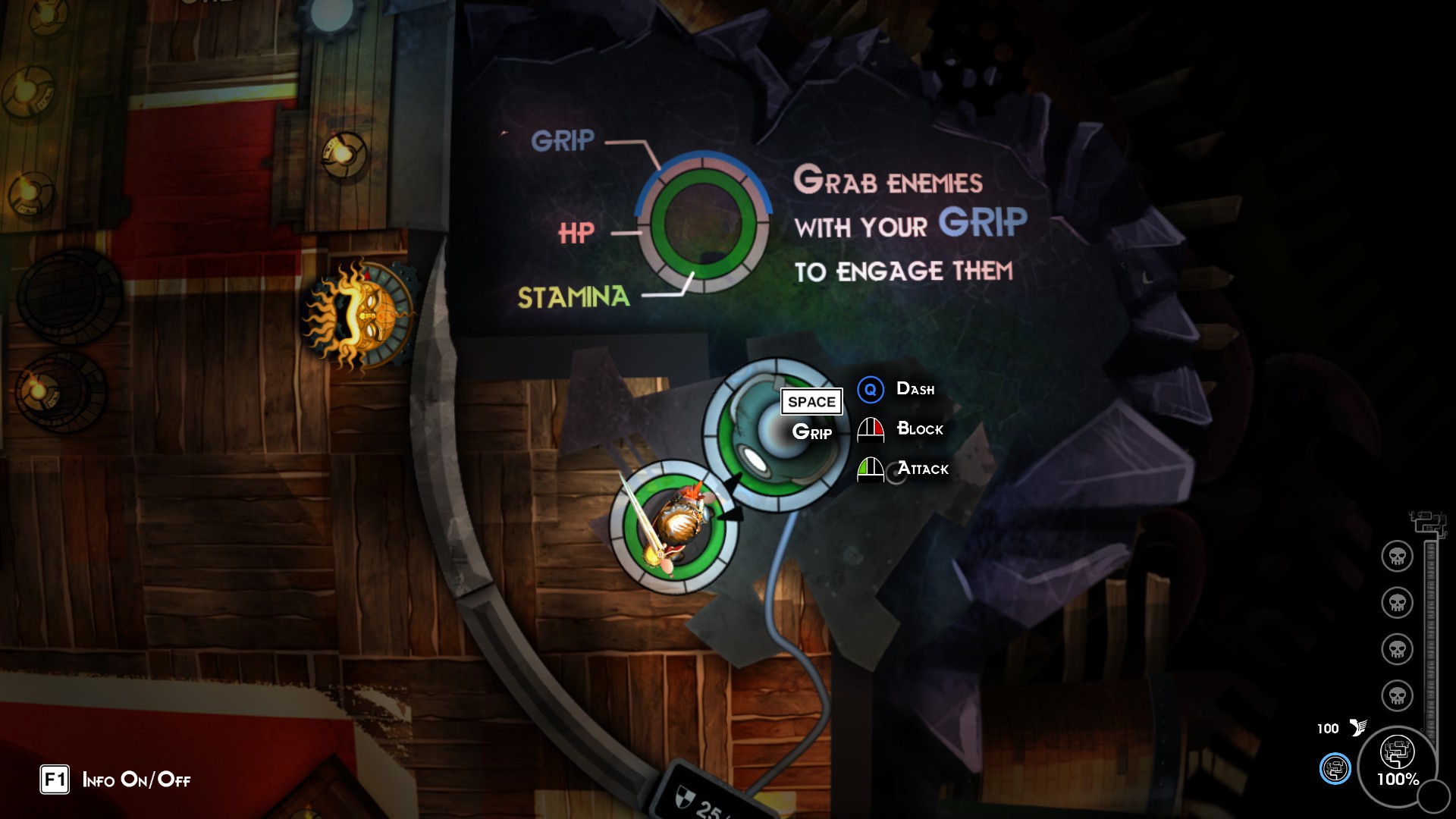 I’m a huge fan of rogue-like games and others with rogue-like elements, but in Soulblight‘s case, it’s basically irrelevant. Sure, each level is different from the last, but with the limited level components, enemies, and loot, and the static boss and taint selection, the differences are only skin deep. The rogue-lite ‘meta-improvement’ concept is implemented by way of some minor bonuses received from fulfilling side-quests for NPCs in the sanctuary, as well as through storage of limited items in the storage chest, for use by your next character. Neither is revolutionary, but they’re not bad either.

I’ve mentioned taint a few times. I was hoping this would be a game-changer: the game adapts based on how you play it. But it’s a bit of a let down. You pick one of four taints — gluttonous, fierce, conniving, etc — every few levels throughout the game, and each one applies modifiers based on various attributes, such as how much food you’ve eaten, enemies you engage, or chests you open]. It’s a reasonable enough mechanic, but it’s the same every time, and hardly game changing. 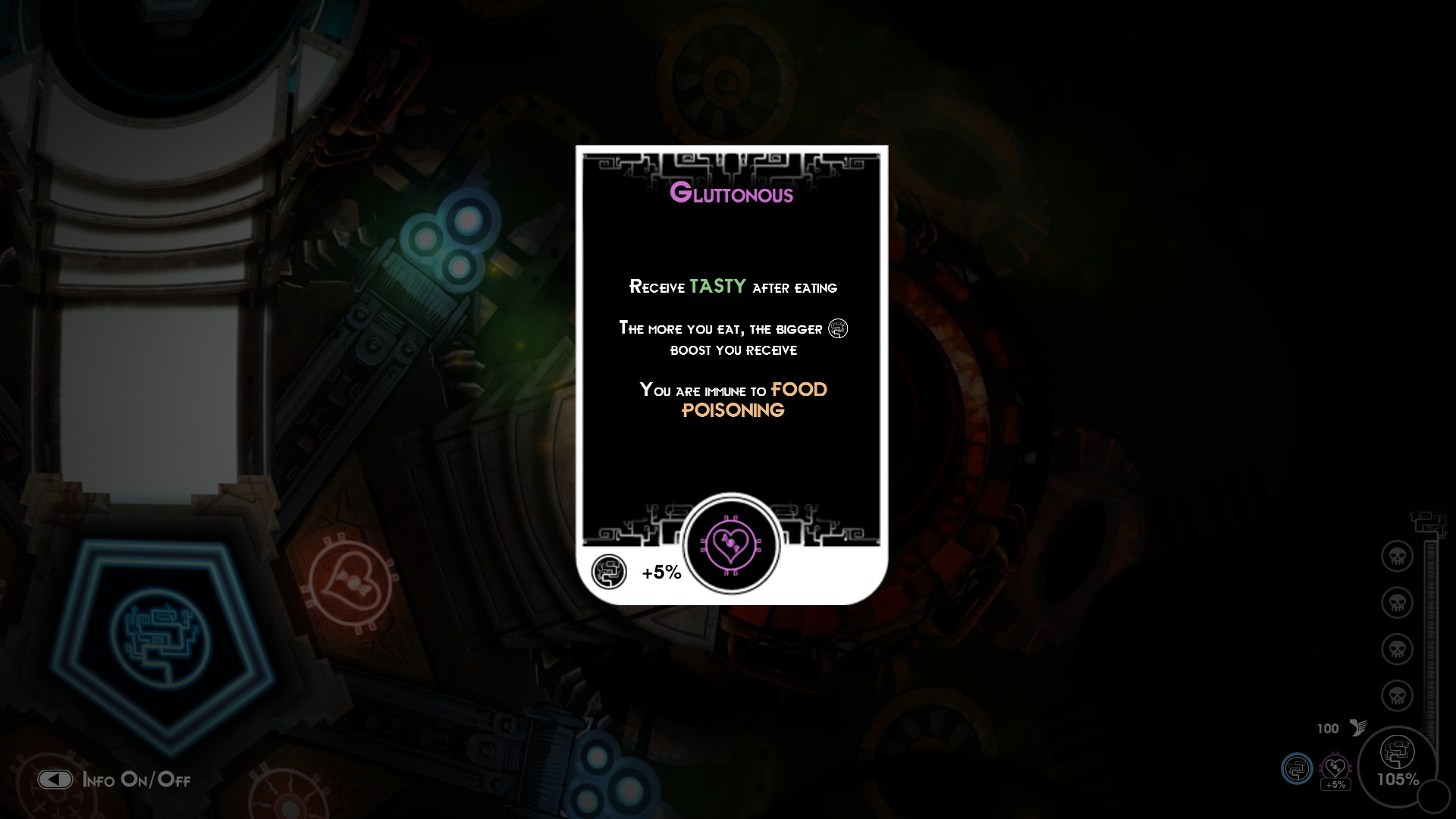 The game also uses a number of fancy-looking screens that function just to break up levels. Whether they’re hidden loading screens, I’m not sure, but they don’t serve any obvious purpose other than to slow you down and give the developers a chance to say, “Look at this; isn’t it cool?” To be fair, it was cool the first time I saw it, but taking a minute every time I finish a level is just a waste of my time. 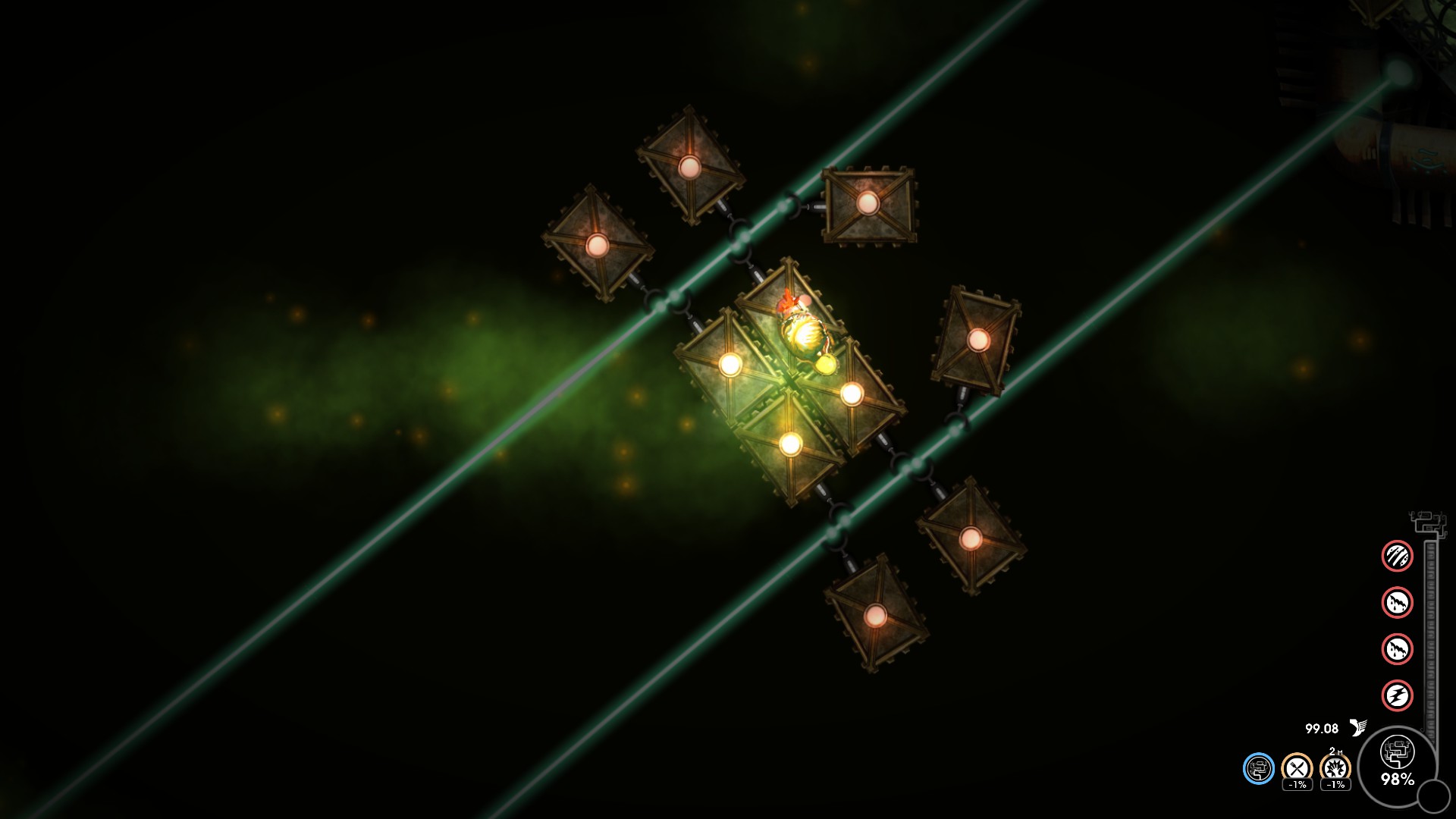 As a work of art, Soulblight is not bad. The setting and graphics are quirky and do a reasonable job of making the somewhat stereotypical fantasy story seem more interesting. As a game, however, Soulblight falls in a bit of a heap. It’s difficult, but more due to the pretentiousness of its presentation — poor controls, hiding gameplay information, not explaining any of the controls or game concepts beyond some barely understandable lore, and making combat difficult through poor visibility and graphical contrast — than any inherent difficulty in the game itself.

I was hoping my initial impressions would give way to a more favourable feeling about the game after a few hours’ play, but I still feel that it’s a bit of a wasted opportunity.