While this superhero themed brawler is fun, it definitely has some issues that hold it back quite a bit.

With Deadbeat Heroes being a game with a superhero theme to it, your goal is pretty much what you’d expect:  punch your way through hordes of evil minions and save civilians on your path to confronting various super-villains.  The catch:  You aren’t exactly a natural superhero and have no real powers of your own at all.  Instead, you use a special rocket-powered gauntlet which allows you to dash all over the place and punch the bad guys with the force of a collapsing star.  And, for whatever reason, it also allows you to temporarily copy special powers used by some enemies if you punch it out of them first.  Equipped with this technical marvel, you’ll do battle with the forces of evil in a series of many short missions and you’ll be graded for your performance in each.

Like most brawlers, Deadbeat Heroes is the sort of game that honestly doesn’t tend to require too much explanation.  You go through each level and keep clobbering the bad guys with more complicated and dangerous foes being introduced to you as your adventure continues.  The basic gameplay loop is very simple, perhaps even too simple.  Choose a mission, reach the end of a rather linear, short level, and then head back to your base for a bit more dialogue and story before popping out to the next mission.  There are rarely any dull moments here.  Not only are levels very compact and totally focused on action, but the between-mission segments are short and sweet.  This works out well for a brawler, as typically in this type of game you just want to get in there and deliver some pain to bad guys.  The game does a good job of teaching you the ropes with both the interface and the camera never getting in the way.  The bright, somewhat chunky visuals always make sure that you can see every important thing during combat.  You’re not going to have any “what hit me?” moments here.   And the colorful graphics overall do look nice, even if they are a bit lacking in detail.   So, we’re off to a good start here. 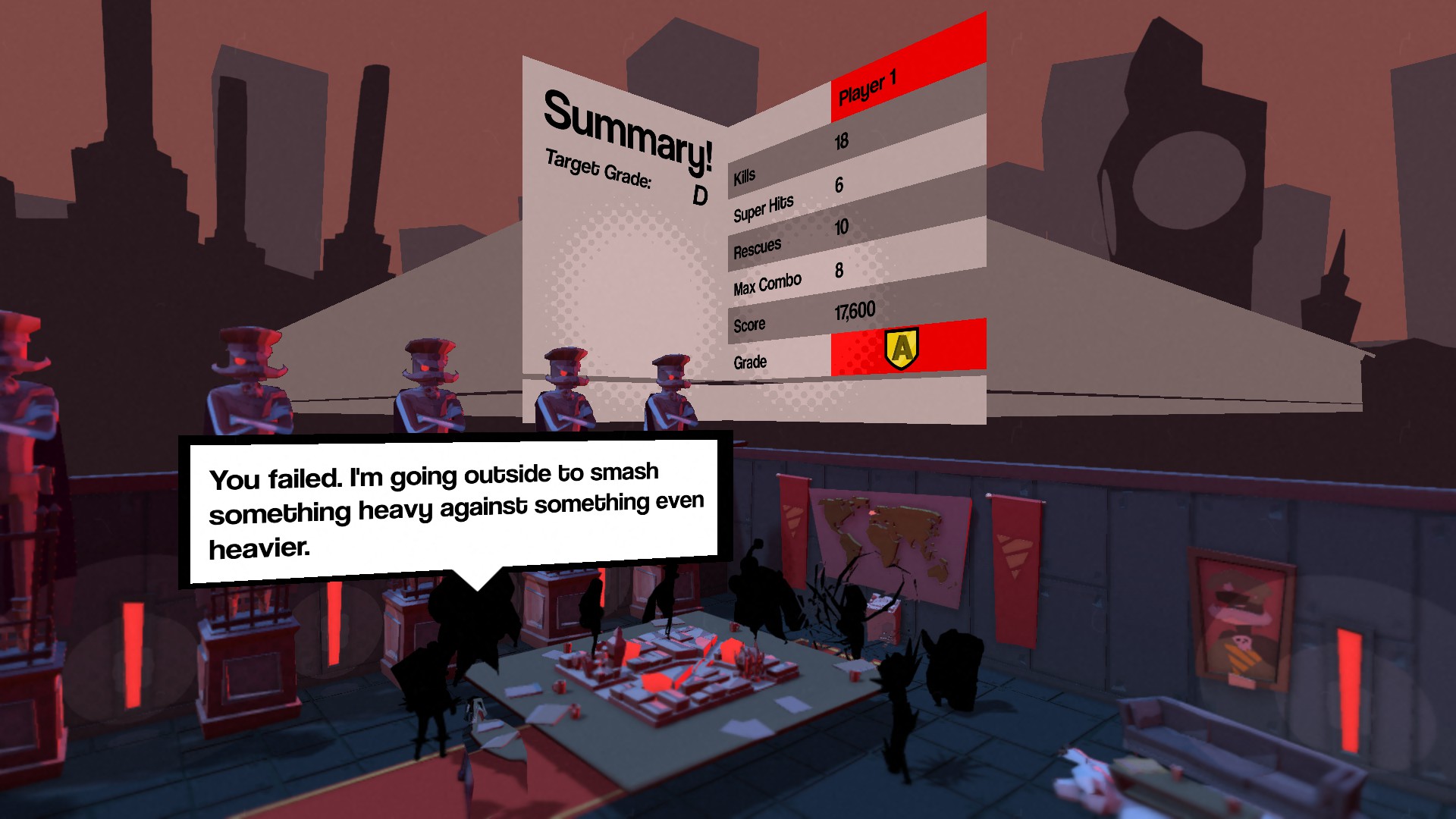 While brawlers in general tend to be rather simple affairs, with you punching and kicking everything into oblivion, Deadbeat Heroes offers a unique gimmick in the form of the rocket punch.  This is, for the most part, your only real attack.  True, you can copy enemy powers at times, but this isn’t used even remotely as often as the punch itself.  What’s more, every single attack from this crazy gauntlet of yours is a very heavy blow that will tend to launch your foes all over the place.  There are no light or medium hits here, and this means that combos work a bit differently than the norm.  Instead of having to deal with long strings of specific actions, combos are all about movement and momentum.  Punch an enemy, and he might bounce off a wall, at which point you can jump up, and punch him again as he’s falling back down, and perhaps do it a third time, or chain your way into other baddies.  For the most part, this free-flowing combo system works well and it can be a nice change from the usual canned combos seen in a lot of brawlers.  The attacks have a very meaty feel to them, connecting with a satisfying THWOCK that really gives a sense of just how hard you hit that shotgun-wielding goon.  You do have a couple of other sorts of things you can do though.  You have turbo-attacks, which are super-powerful impacts of various sorts, doing massive damage, breaking enemy guards, and stopping the action for a moment for a dramatic freeze-frame of you punching some jerk straight into next Tuesday.  These combat mechanics can be quite satisfying, and you’ll unlock various new forms of rocket punches as you go along, but at the same time the whole thing can get a little repetitive.  Most of these moves will originate from a single button, with the exact move being determined by what you’re doing at the time.  If you’re standing still you’ll get a different move than if you attack while you’re running, for instance.  And you do have all sorts of options for movement, whether it’s double jumps or wall-running, all of it controlled quite nicely.  But as I mentioned, these moves are all heavy attacks that tend to launch you at your foes, and since they all tend to follow this one theme, they can begin to seem a bit homogeneous rather quickly, even if each one serves a different function. 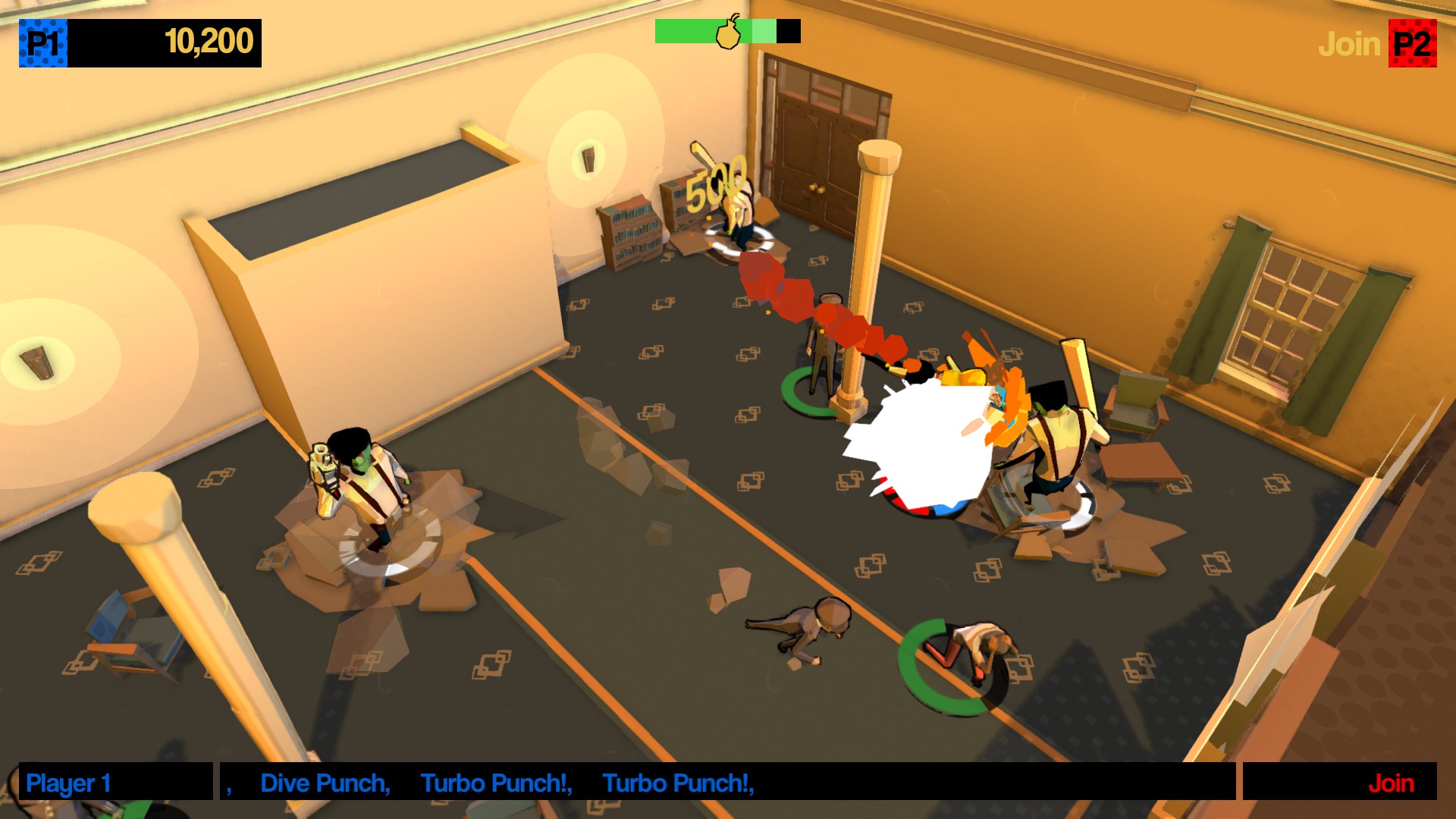 Now, those rocket punches may make up the majority of the combat, but you do have that ability to temporarily grab new powers for yourself.  You’ll get these from powered minions that will appear from time to time.  These guys tend to be pretty dangerous, but if you pound them into the ground with your mighty Hulk fist, they’ll drop an item that gives you the very same power they were using.  This could be anything from an explosive AoE blast, to invisibility, or maybe the power to freeze foes from a distance.  More and more powers will be introduced over the course of the campaign.  Now, as fun as these are, they don’t come into play quite as often as they could.  You’re still going to be using your rocket fist for most of your attacks.  They don’t end up feeling like they have quite the effect on gameplay that they could.   There is, however, one other option for getting these powers, but this is where I ran into a problem quickly.  As you go through the game and defeat super-villains, you’ll have the ability to choose and equip a power from your home base.  The problem:  I never quite figured out just how to use them, even though the description for the power will say to just hit the button for turbo attacks when the meter is full.  The vast majority of the time, even though it looked like the power should be usable, this would just produce the typical turbo punch.  Now, it’s absolutely possible that the game did explain this mechanic directly, and I simply forgot… this isn’t uncommon for me, with my terrible memory.  However, the issue remains that this system just isn’t very intuitive at all.  I seriously just could not figure out how to use these pre-set powers during missions, and would end up only using powers directly snatched from fallen foes.  There wasn’t any way to look it up, either.  There is a training room in the base, but it explained pretty much everything EXCEPT that mechanic.  I could check out info on basic and advanced moves, but the exact explanation for the equipped power usage just wasn’t anywhere to be found. 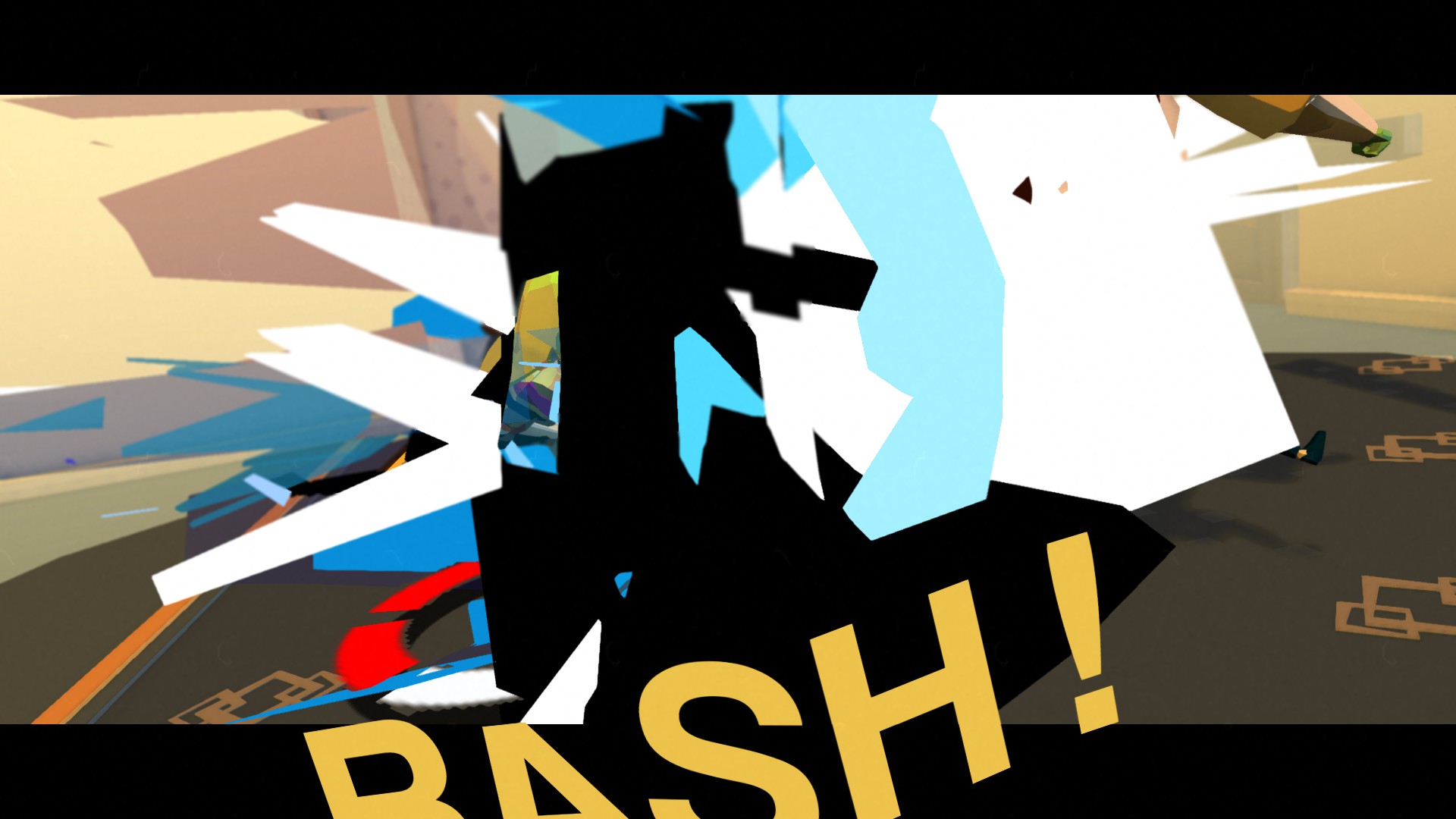 On top of this, there was a second rather annoying issue I constantly ran into during combat which involved the game’s combo system.  An interesting feature of it is that if you hit the turbo attack button while your meter isn’t full, you’ll get a quip from your hero instead.  Often,  it’s some snarky line of the sort that you might get in comics.  These serve the function of extending your combo timing a bit, giving you more of a chance to keep the combo going without breaking the chain.  Or, at least, it did this as long as I didn’t have a power active.  Once you have one, this important mechanic becomes inaccessible to you because that button will now just use powers instead.  This can actively make it harder to keep your combos going, and it makes these special abilities quite a bit less desirable than they otherwise might be.  This isn’t exactly a game-breaking issue, but it can definitely make it harder to get a good grade on a mission, and these grades are important for your advancement through the campaign, as each set of missions has some target grade that you need to hit.  The exact way that these are scored is a little unclear, but the basic idea is simple enough:  play skillfully, and don’t screw it up. 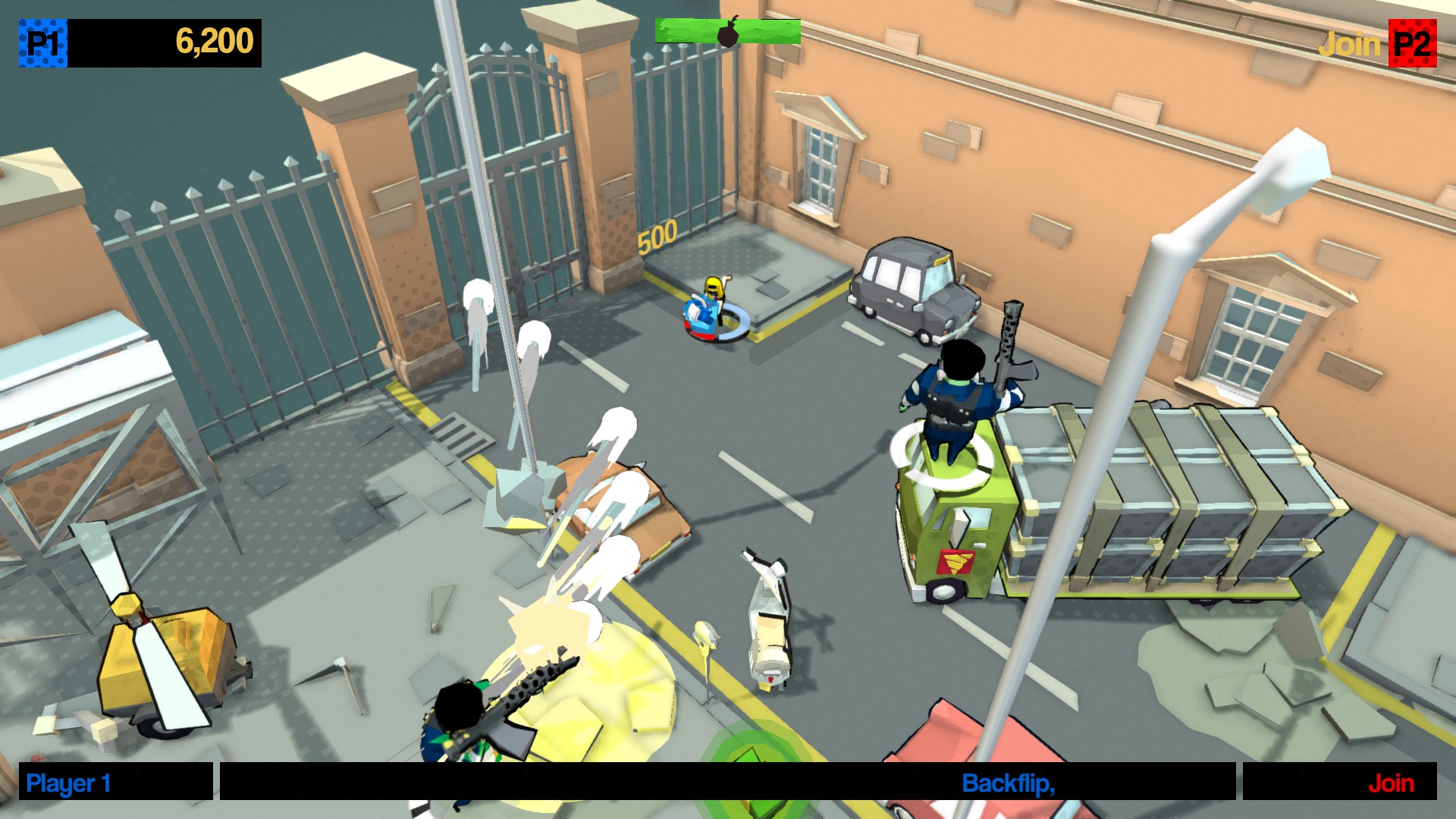 Not that it’ll be easy to manage that.  All sorts of minions will be thrown your way.  Everything from bat-wielding jerks to nasty dudes with shotguns, going alongside the occasional much stronger foe with special powers.  In an overall sense, these baddies tend to have fairly simple, traditional attack patterns… nothing particularly unique or special here.  You’ve seen these sorts of attacks before in other games, even those coming from power users.  But they’re all balanced out well enough.  It’s never too overwhelming, and there are no unfair hits here, just your own personal failures.  These guys, simple as they often are, make for fun enemies to knock around.   The levels, on the other hand, are perhaps a bit too simple.  They are extremely linear, and just feel very basic all around.  Yeah, they’re filled with all sorts of objects that can be knocked about, poles to climb and dramatically leap off of, and walls to run on, but they just feel rather lacking, and are also extremely short.  Also, their overly linear nature means that there is no exploration to be done here.  Not that I really expected any, as brawlers are about clobbering, not wandering.  So perhaps that’s fine.  But they still just feel like they’re missing something.  This aspect of the game could be a lot more interesting than it actually is. 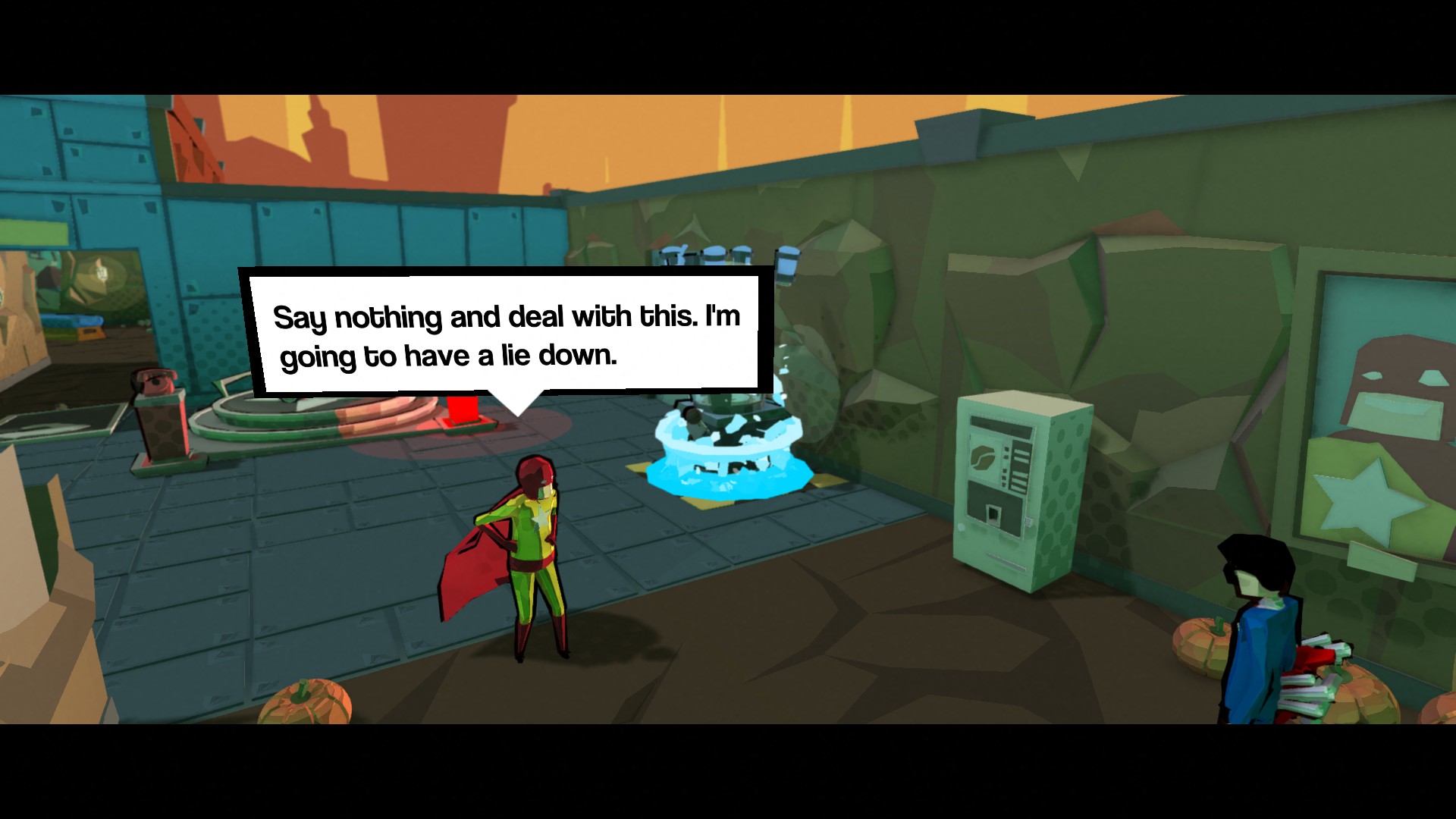 Deadbeat Heroes is a pretty fun game that doesn’t overstay it’s welcome.  It has a specific theme for it’s gameplay mechanics, and sticks to it well, not adding in a lot of superfluous ideas that just complicate things for no good reason.  But that rigid aspect leads to alot of repetitiveness that might be unattractive to some players, and is something to consider when you’re thinking of buying this.  While it’s a very solid game, it doesn’t truly bring anything new to the table beyond the extreme focus on rocket punches.  There are definitely better brawlers out there, but there are also definitely many, many worse ones.  It’s not particularly great, but I do think it’s worth playing.  You’ll have some fun here even if it doesn’t last as long as you might like.