Though the Steam store page suggests Epic Tavern is an adventure / RPG / strategy title, I think it’s a cross between a management simulation and a kinetic novel.

In Epic Tavern, you’re the child of Merrick and Lycacia Ravinger, two famous heroes of the Ravinger Four, the adventuring group that saved the world only a decade ago, but sacrificed themselves in doing so.

Over 1400 years ago the Flaming Gate opened and hordes of netherkin entered the world of Beor, laying a path of destruction over the land. The Gate was sealed with powerful magic, and so it remained until 10 short years ago, when evil magic opened it once more. The Ravinger Four set out to destroy the gate, bringing down a mountain on top of it and the Necromancer Elysia — and themselves.

Your parents didn’t leave you entirely to fend for yourself, though. You inherited their tavern, and now that you’re old enough it’s time to fix up the place and reopen it once again as a place where legendary heroes can gather … and drink mead.

The two distinct parts of Epic Tavern — tavern management and questing — are both very different in look and feel. The tavern section is made up of a fixed-position third-person three-dimensional view of the tavern’s main room interior as well as a number of management screens, while the questing section is a single map screen with some animated markers and a large scrolling text box showing progress through the quest, with the only interaction being to press the Continue/Roll button to advance the story.

The tavern interior looks pretty nice, with good models, textures, and animations, but it’s always the same; there’s no variation between games, you can’t move anything around, and any modifications or improvements to the tavern make no visual difference. The number of character models is also pretty limited, but what’s here does look good. The world map is also very pretty, with especially nice-looking bodies of water. 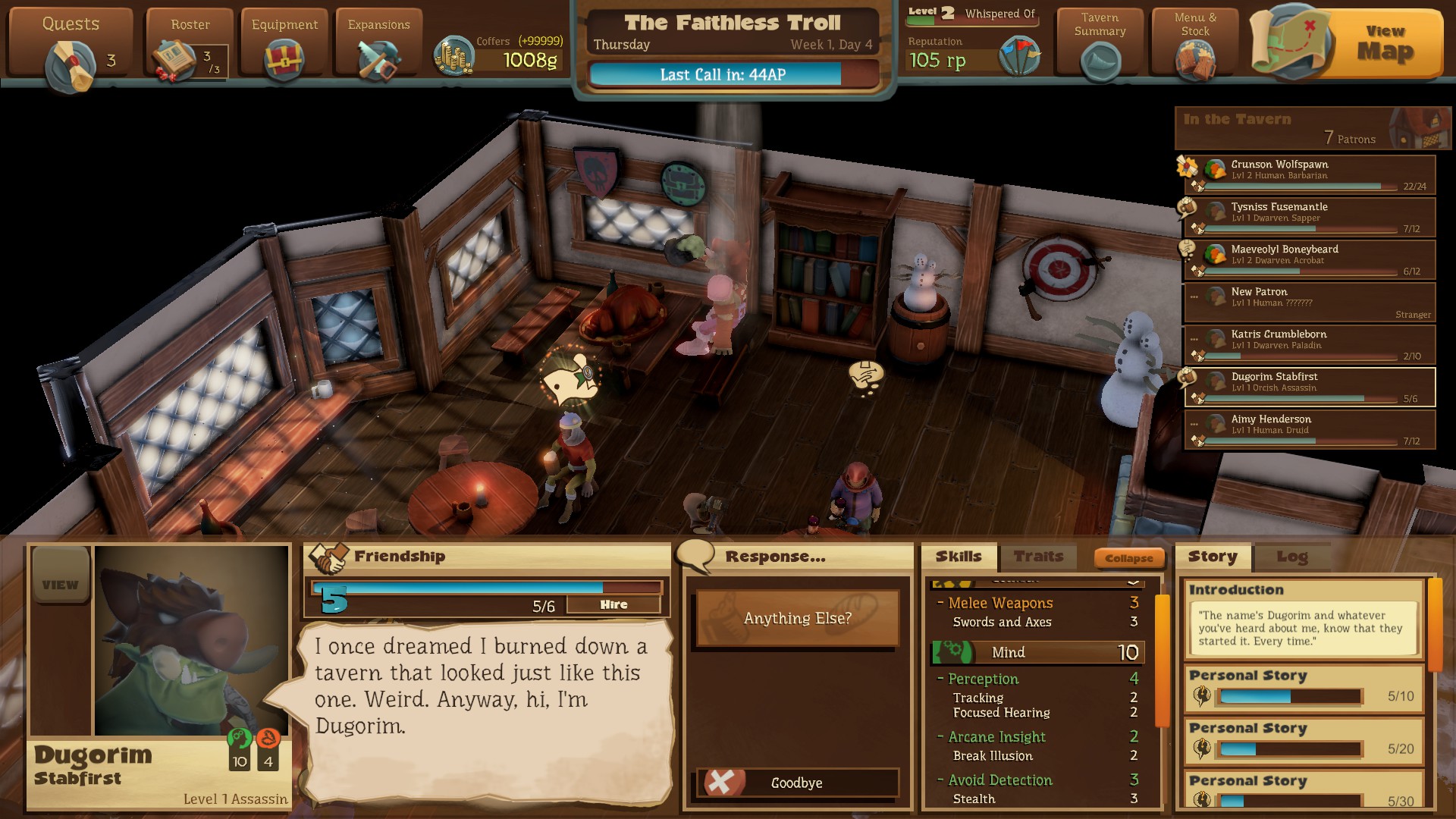 The interface is functional and mostly looks good, but can be confusing. There are very few tooltips, so trying to find out what certain game elements — basically anything to do with your heroes — actually do can be frustrating. It has some placeholder style elements, too, and some of it just doesn’t make sense. For example, why even have the equipment screen if it’s only there to display one button redirecting the player to the character roster screen?

There are some minor graphics-related bugs, too. In quest mode, the text sometimes displays and then deletes the control words used to demarcate different colours of text. There also seems to be no documented way to rotate the tavern camera, but when you talk to a patron and exit the conversation the camera may rotate a tiny bit automatically.

Sound effects are limited, but the tavern does sound quite good, like a quiet pub on a busy night. The music is fantastic with a definite fantasy/mediaeval flavour, but it seems that there are only a few tracks so far. There are no voices, but there are a few grunt-like voice effects.

Epic Tavern is a Unity game and the only options are accessible via the standard Unity launcher, with resolution, full screen / windowed toggle, and a single detail setting. 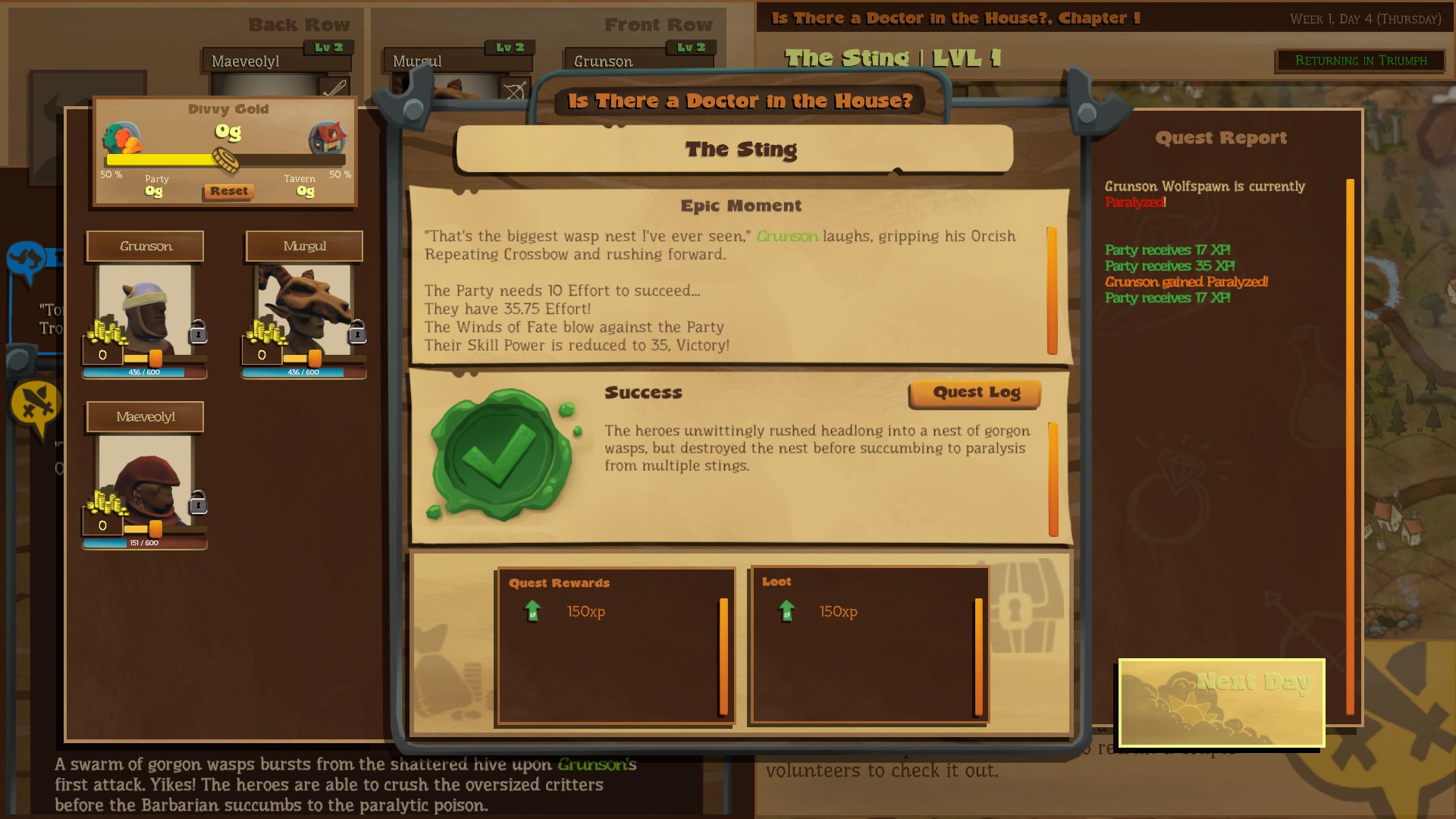 Epic Tavern‘s gameplay is a weird mix of management simulation and kinetic novel. There’s not really a role-playing game here; though your heroes level up and you assign skill points, I think mostly your choices are irrelevant: total points in each of the four skill categories — combat, mind, social, and survival — are all that matters. In any case, neither the skills themselves nor their impact on the game are actually explained.

The tavern management section gives you a number of action points to use each game day. You spend these on customer interactions: talking with them or serving drinks or food, essentially. Patrons will tell you about quests and, once you’ve befriended them, themselves as well, but much of this is work in progress. Patrons can come and go as time passes, too, but they tend not to change too much throughout the day.

You can manage tavern upgrades — a wine cellar or infirmary, for example — as well as order food and drink and manage your menu and profit percentage. You can also hire patrons as heroes (only up to a small number, based on your tavern’s level), manage their equipment and level them up, and send them on quests. 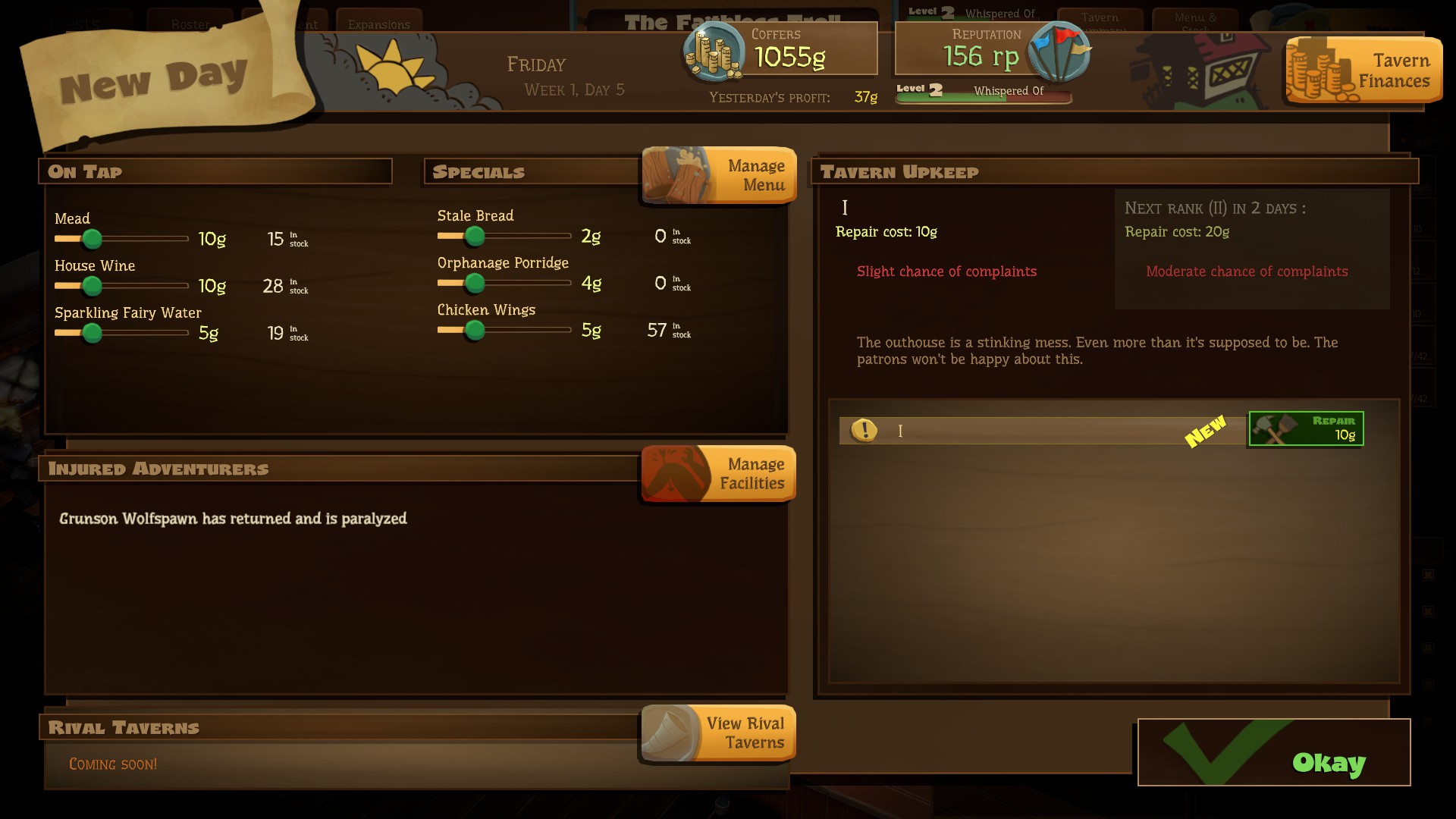 The questing is essentially a RNG-influenced kinetic novel. You begin the quest from the tavern, which ends the day. You can queue up multiple quests if you have enough characters, but ultimately that just lets you progress through them more quickly; I don’t think there’s any benefit other than saving time — unless a quest timer is about to expire, I suppose. The quest interface comprises a large marked-up text box on the left of the screen and a cut-down world map on the right. Each quest is divided into a number of events, some of which are scripted as part of the quest itself, and some of which are ‘random’. You progress through the quest by hitting a button and when you get to an encounter and press the button, the game calculates some numbers based on a combination of RNG and your characters’ abilities to determine if you succeed. Oh, and you can change each character’s stance, too, which can affect the rolls by a few percent either way. 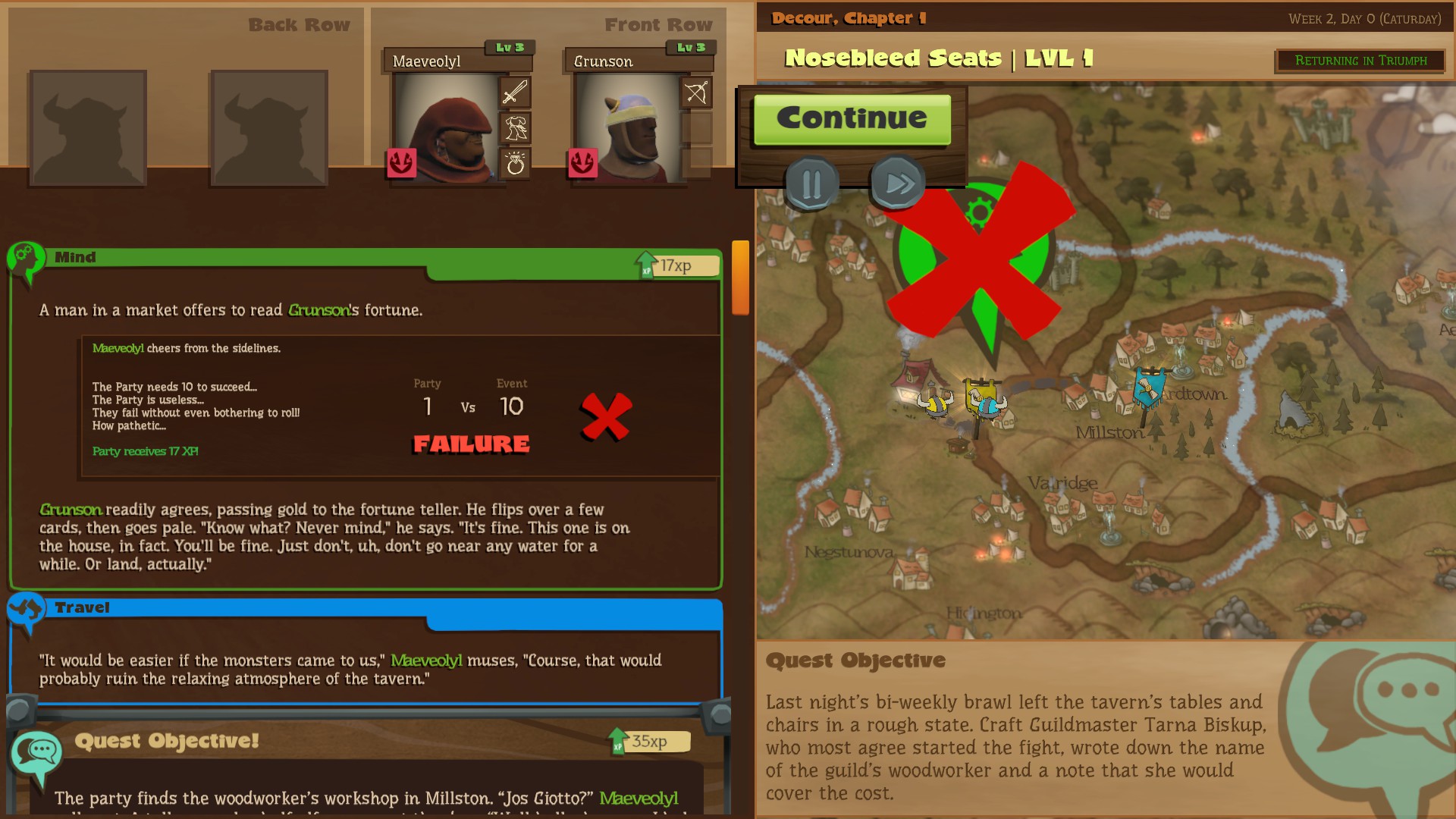 There’s no direct control over character actions. All of those great skills are effectively just modifiers to the core skill group numbers, and the quests themselves are the same every time you play the game; the only procedural generation is in the ‘random’ characters that sometimes enter your tavern and events that can occur during the quests. Fairly quickly the whole thing starts to feel rather shallow.

That’s not to say it’s not fun, though. The writing for the quests is mostly very good, with a dry and clever sense of humor and only a relatively small number of grammatical errors. And there are a LOT of quests: hundreds of the things! I haven’t reached anywhere near the end. 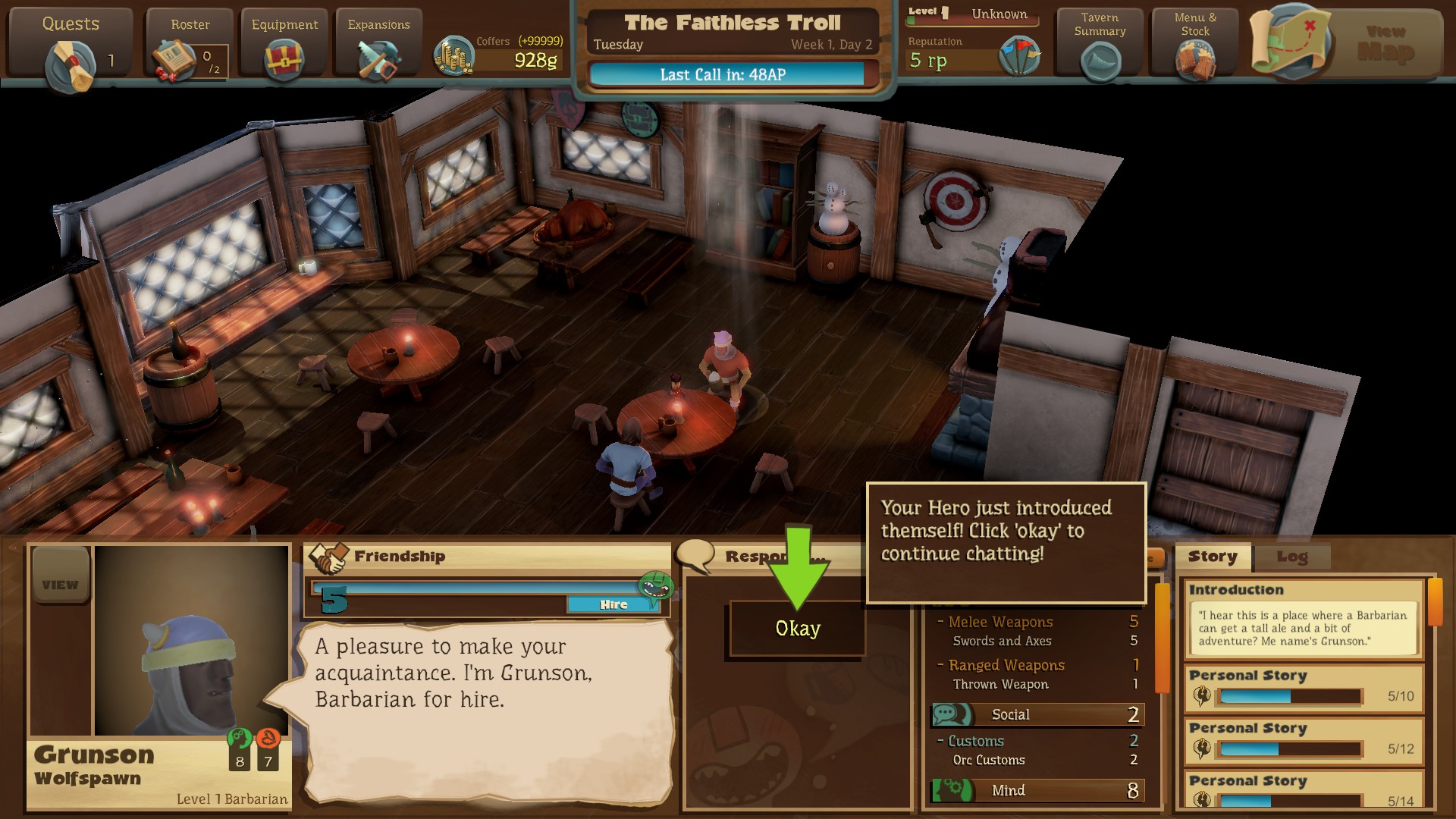 The game is in Early Access and it shows. Mostly the questing system is functional, though I’m uncertain whether it’s finished or will be expanded further. The tavern management section of the game, by comparison, is quite bare bones and has a lot of obviously unfinished features. From placeholder text (“The Quest with a Name”, “[Quest not found]”), to “coming soon” notices in character backgrounds, and sections marked as work in progress, there’s not enough here yet to get excited about. This should improve with time, but don’t expect too much at the moment.

There are also many bugs, though most of them are minor. Perhaps the most annoying I’ve encountered so far is that quests sometimes take more days than specified in their descriptions, which really stuffs up planning. Some weird control words in quest text, quest text not matching game occurrences (e.g. being offered gold and earning XP), tavern characters playing musical chairs, and non-working Steam achievements are all quite common, too. The quest log would be better in chronological (rather than reverse-chronological) order to make it easier to read — and a button to save it somewhere would be nice, too — and the loading times can be surprisingly long. 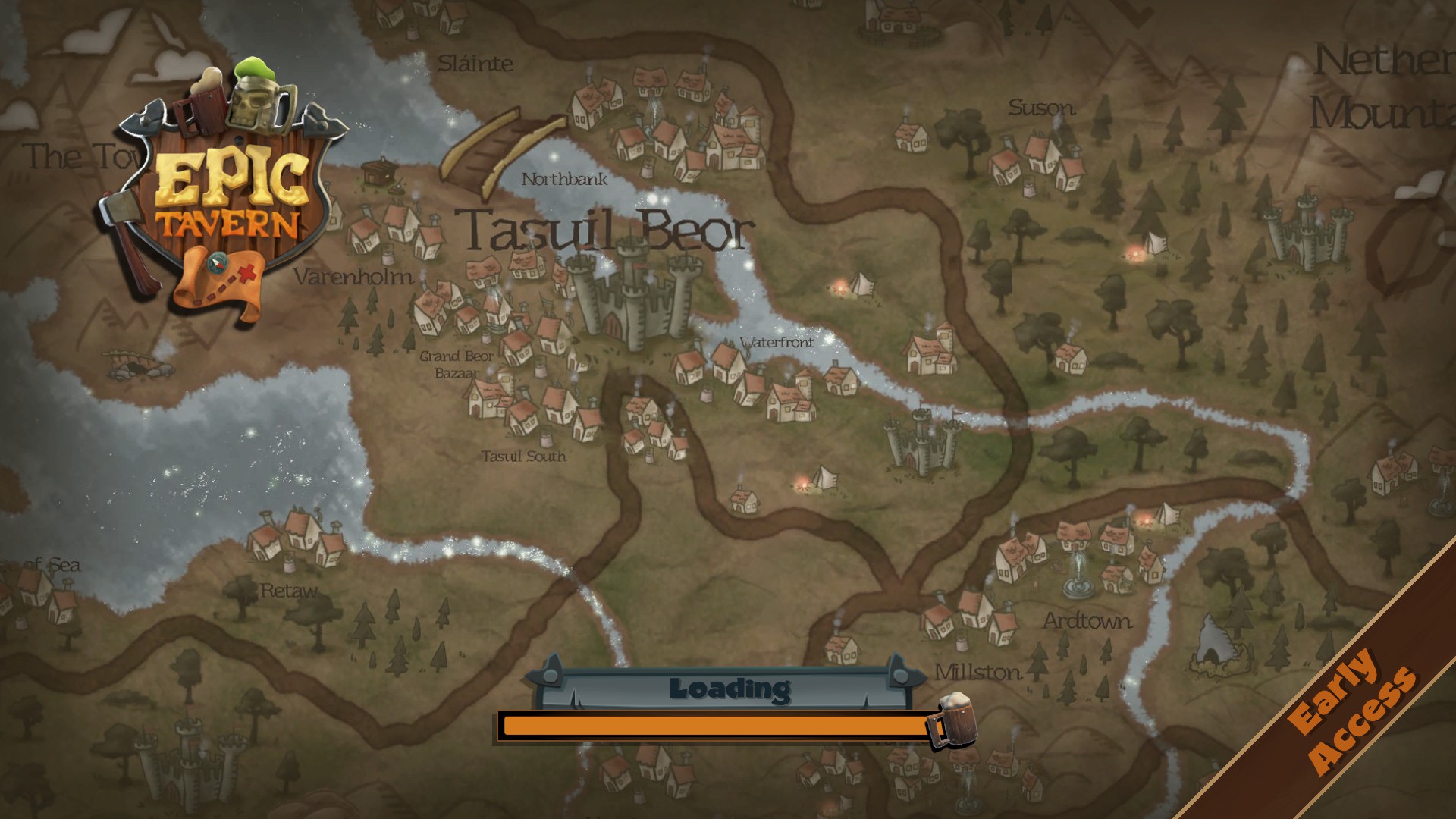 I think Epic Tavern will be a really good game eventually. At the moment, though, parts of it are sorely lacking and rather buggy, though that’s pretty much expected in Early Access. Is it worth the asking price? No, definitely not. But it is a unique combination of game genres that I don’t think you’ll find anywhere else, and it is fun in its own way.