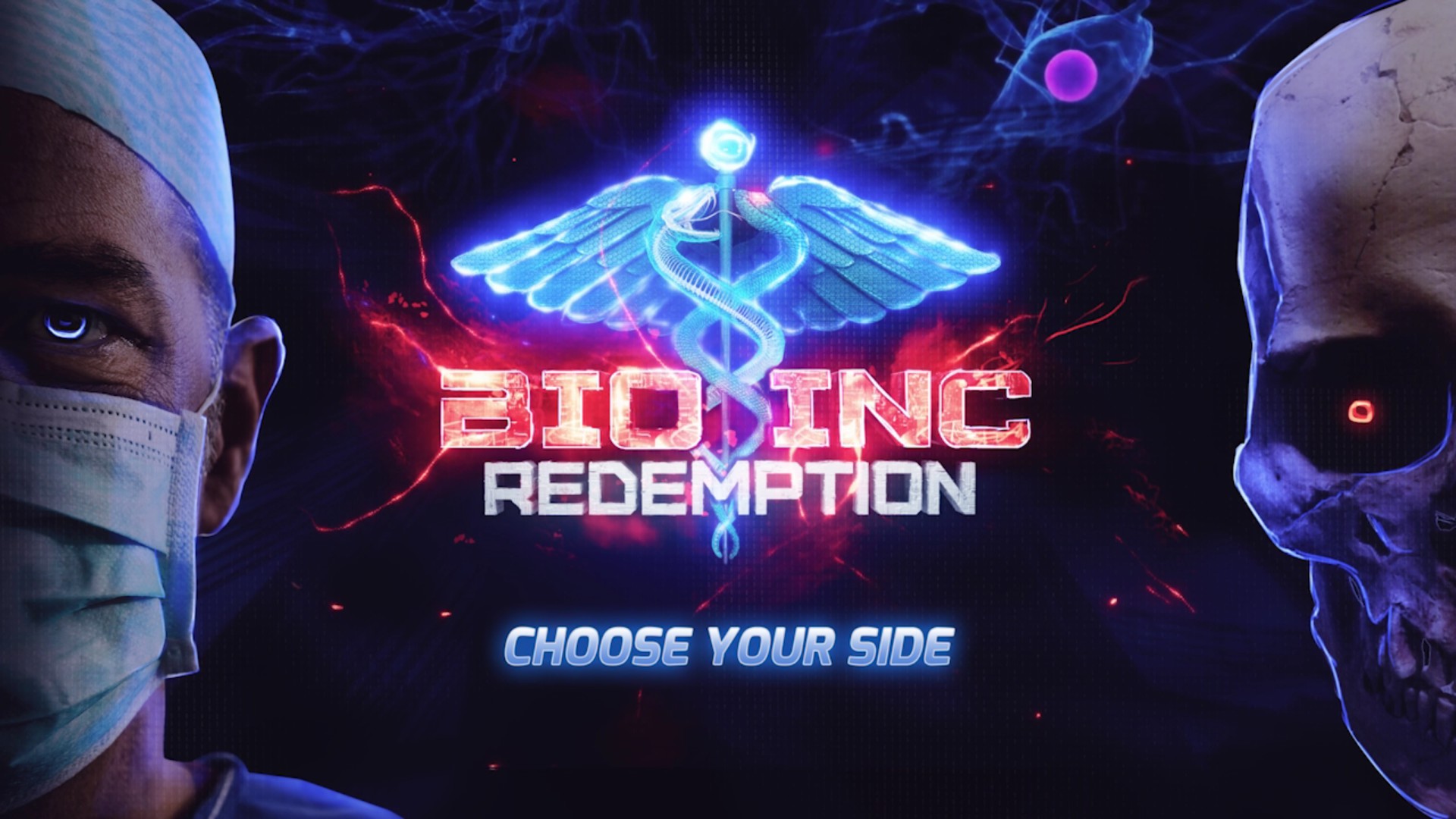 Bio Inc. Redemption is a fun disease simulator, which lets you either fight for the patient’s life or evolve the disease enough for them to die. The choice is yours.

In singleplayer mode, you can choose either life or death. In the former, you try to heal the patient and in the latter, you try to kill them as fast as possible. To spice things up, the developers recently added a multiplayer mode, in which two players compete against each other. One is tasked with the patient’s death, while the other one tries to counteract the disease’s effects.

When you open the game for the first time you are shown a cutscene, which was of unexpectedly high quality. I sincerely enjoyed those 60+ seconds. In this short time, they show you that there are two completely different game modes from which you can choose – you can either be the villain or the hero. When the cutscene ends, you are shown the main menu, where you can choose how you want to start playing.

Choosing any of the two game modes shows you the appropriate levels along with the ability to play the tutorial. Both tutorials are well-made, they show you all the basics you need to know in order to play the game successfully. The only remark I have is that it ends too quickly – they should at least let you kill/heal the person completely even when all of the game mechanics have been thoroughly explained. But this is not a big deal, really.

Each game mode has its own levels and challenges. At first, only one level pack is unlocked. In order to be able to play the next ones, you have to earn enough hearts/skulls on previous levels. The amount you get is based on the difficulty you play on – all levels can earn you between one and four units. If you’re not able to unlock the next packs, you simply have to play some level on a higher difficulty. 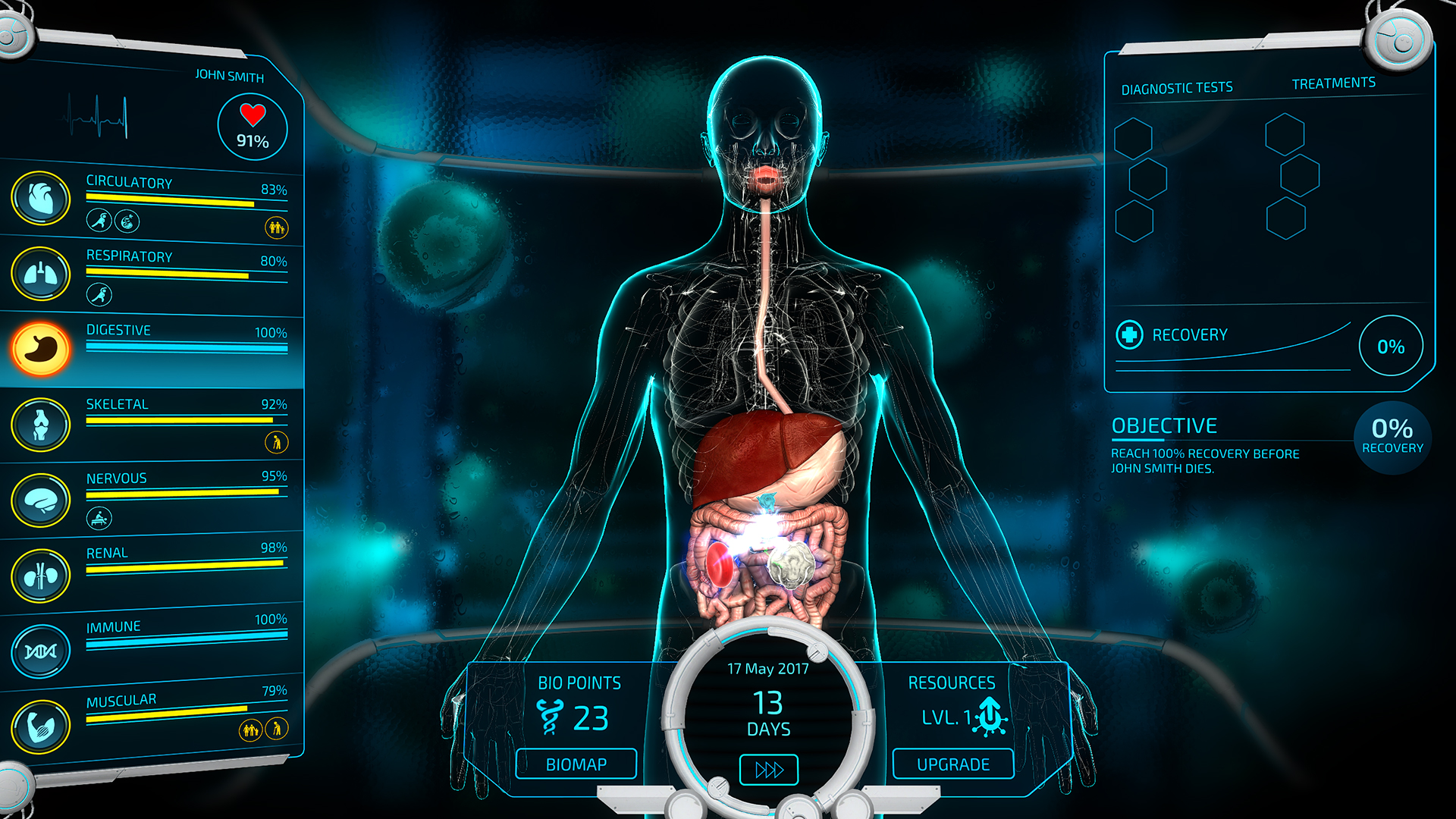 The levels can appear to be quite hard at first, it may even seem like unlocking new levels is next to impossible. However, each time you level up, you get an XP point, which you can assign to a booster before starting a level. This can help you a lot if you decide smartly when picking the bonus.

When you do so, you finally get to play the game. On the left side is the Systems panel, which shows you how the patient’s body systems are doing. Each system has a percentage of “health” left, based on which you decide which diseases you should prioritize when buying treatments/diseases.

On the bottom of the screen, there is a button which opens the disease menu. There, you can buy more diseases or try to diagnose the problem based on the symptoms (this depends on the mode you picked, obviously). When you’re in-game, the so-called Bio Points spawn on the patient’s body, which you have to collect as soon as you spot them in order to prevent them from disappearing. You can then spend these points on the Disease panel. 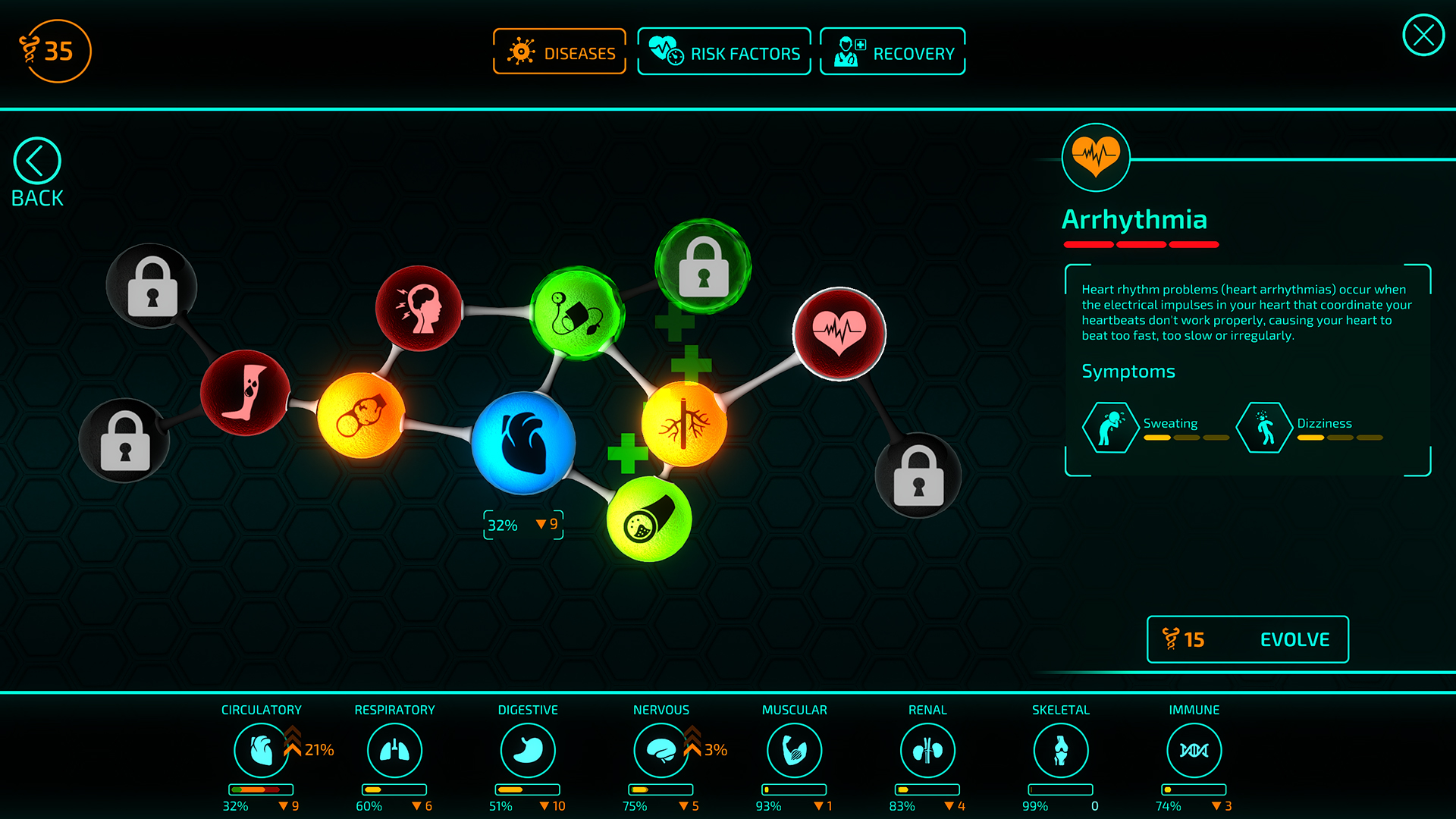 The multiplayer mode is not much different in terms of the gameplay. You can play with your friend on Steam or other some random player who also happens to be looking for a person to play with. One of the players plays Life while the other plays Death. While I was playing with JimDeadlock, a fellow SaveOrQuitter, I first picked Life and I won with absolute ease. This is due to an apparent imbalance because of which I was receiving enormous amounts of Bio Points. This meant my victory was imminent and prompt – my opponent didn’t stand a chance. Similarly, he won the next round when we switched roles.

There are some other differences in multiplayer. If you pick Death, you get 40 BioPoints right at the start of the round and you have 60 seconds to spend those points on what you think will bring you victory faster. Although this somewhat justifies why you get much fewer points later on, there is one thing which I truly dislike – you can’t save any of those 40 points for later. Buying 40 points worth of diseases right away isn’t necessarily a good way to start the game as it really doesn’t fit everybody’s strategy.

Still, I had a lot of fun playing the multiplayer mode. It was much more exciting to play with another human being and I’ll definitely do it again, especially if any balances are announced. 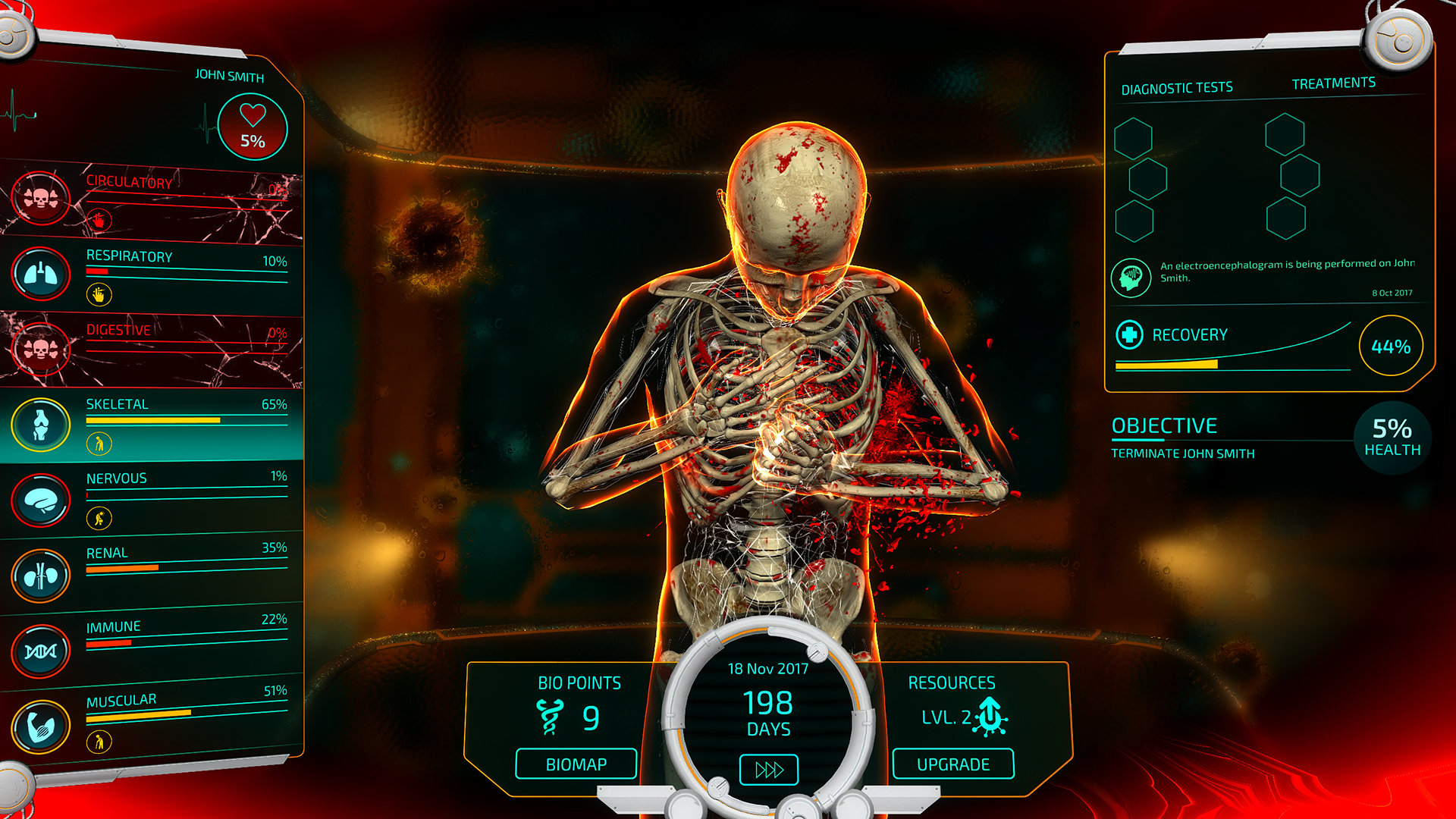 Other pros and cons

There are still some more things I was to express my opinion on. First of all, the soundtrack fits the game really well. Especially when the patient is close to their death, the heart rate beeping other noises make the game much more exciting to play and I often found myself leaning towards the screen because I was so immersed into the game.

I would also like to point out how great this game looks. The user interface is really intuitive and you quickly figure out everything you need to know. I really liked the icons of systems and diseases – in most cases, you don’t even need to read to know what they mean.

Not everything is so great, though. During the nine hours of my time I spent playing this game, the game crashed four times. Although this game supports saving the current round and continuing it at a later time, I had to start the round again after crashing.

I had a wonderful time playing this game and I can recommend it to everyone. The price isn’t that high and especially if you have a friend who is willing to play with you, you will most likely play this game for a substantial amount of time. The levels are just challenging enough to make you feel excited and rewarded for what you’ve achieved. The game also looks and sounds good. Apart from the occasional crashes and the somewhat imbalanced multiplayer mode, you will definitely have a good time playing.