Let’s have a look at Elium: Prison Escape, a new roguelite action and stealth game from Lone Artisan Games.

Elium – Prison Escape is a roguelite first and third person action game in which we will impersonate a prisoner attempting to escape a dark and forgotten dungeon. The story is minimal, and begins the game with our unnamed prisoner, apparently a veteran from some kind of conflict, standing in a cell for unknown reasons, and suddenly liberated by a fellow prisoner who somehow managed to escape his cell and get a pair of keys. Right after this brief introduction we are catapulted into action with only one objective: escape. Even if this concept and setting might prove interesting, Elium is a game with several problems that do not allow it to shine we thought, as you will read further in this review.

General Gameplay
We are introduced to mainly two different play styles for Elium: one is the way of “Stealth and shadows”, focusing on staying hidden from guards, stealing necessary items, killing without being noticed, and generally being out of trouble. The other gameplay we can choose to undertake is the “loud” one, meaning fighting every single enemy we encounter and clearing our way using brute force. The game, within the tutorial, makes us understand both of these styles are viable depending on which one suits you best.

The mechanics concerning the character and environment are pretty straightforward and basic: there is a Health bar, without any regeneration over time, a Stamina bar, consumed when performing attacks or parrying, a quite basic Stealth system revolving around staying out of light sources, wearing lighter clothes and generally avoiding enemy line of sight, a basic inventory management system with a maximum weight limit, and the possibility to grab pretty much anything and throw / move it to distract enemies or hide. Within the first part of the game, this adventure will be a lonely one, with no particular companions to aid you in any situation.  The developer did note that there are prisoners who will follow you as you progress in the game, though. 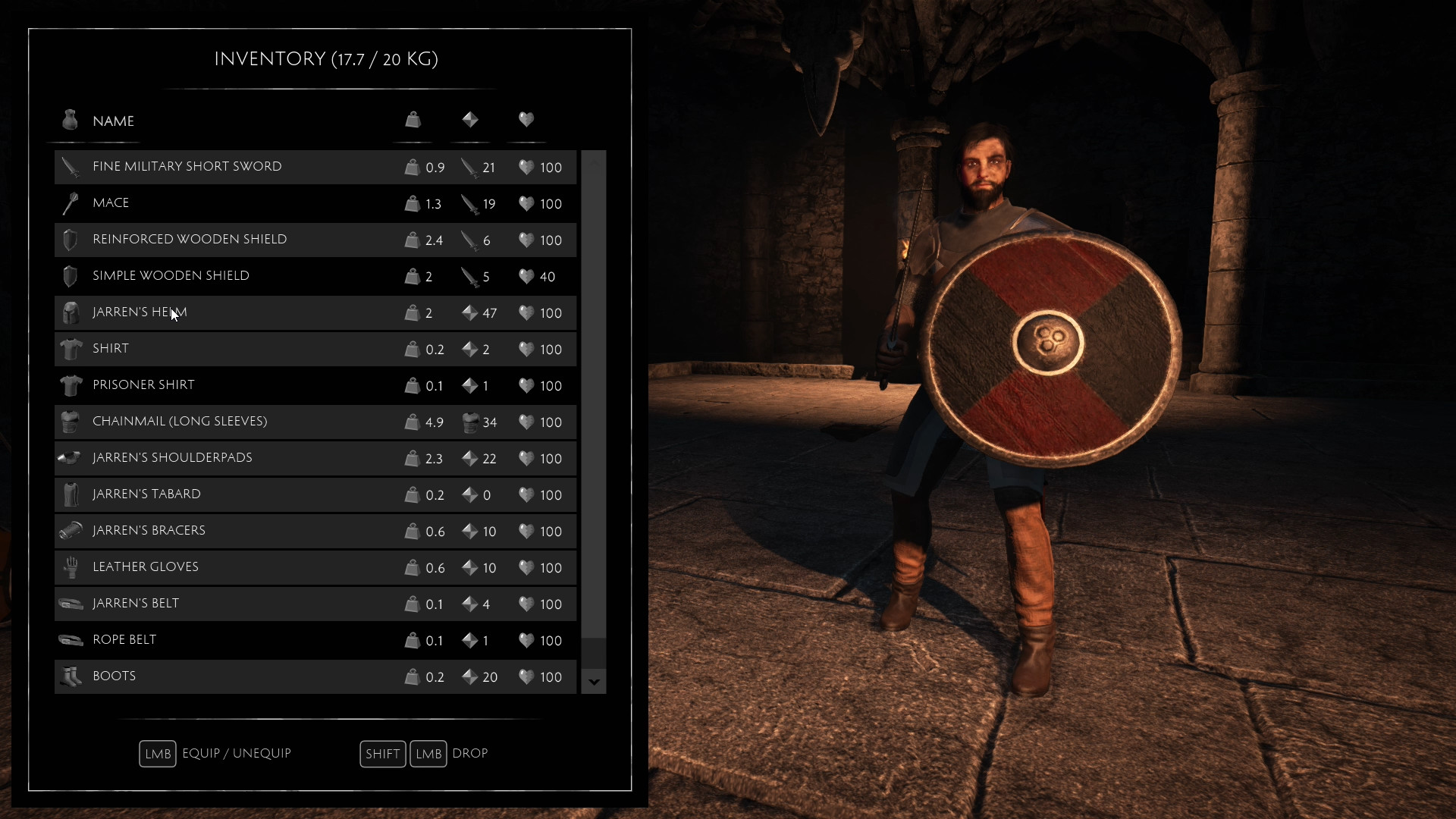 There are some problems with the Stealth system itself. The enemy AI will sometimes fail to notice you even at very close range while in other cases they will spot you even when in pitch black shadows or very far from them.  There is a  “stealth level” indicator built into the crosshairs that glows more when light hits you and darkens as shadow covers you, however it is hard to see.   Granted, this also depends on the type of player you are as some people prefer to play without any indicator whatsoever.

The combat in Elium is a very strange and peculiar system, innovative some would say, and it would be all good and happy… if it worked. Let’s start with a quick rundown: in Elium, attacks with any weapon (including fists) can be directed Up, Down, Left or Right, by clicking Left Mouse Button and simultaneously moving the mouse itself in the general direction we want our attack to go. The exact same mechanic applies to Blocking with either weapon or Shield if you have one. On paper this looks like a dynamic and refreshing system, but in practice it just doesn’t work well. My tests on this system have shown a severe inaccuracy in detecting directions, meaning sometimes it just makes attacks go where they want, and this when just testing. In a real combat situation against an enemy, missing just one or two slashes (or even worse, parries) can prove fatal, so this inaccuracy is really crippling the whole system. The developer replied to this and stated, “the player should click-and-hold, then move the mouse, then release the button. Simply making a click and moving the mouse simultaneously leads to an incredibly small “direction detection window”. I will however make a fallback system that will artificially make the detection window longer for such cases.”  We did try this again in a repeat gameplay, but the same issue occurred no matter how many times we tried to follow these instructions.  We also listened to his advice that, “the block is timing-based” and attempted to use time-based methods, but again were unable to block well.

Animations, weapons feel, combat pace all feel very clunky and unresponsive, almost as if your character is some kind of wooden figure that has not been oiled for years. To add more problems, hit detection on enemy models is inconsistent: more than a few times I noticed swords just going through enemies without any effect, and also the opposite, slashes hitting us (or them) from completely ridiculous distances or directions for no reason. These problems with hit detection and model accuracy make the combat system in Elium fairly unreliable and severely rough edged in a bad way, making any “loud” type of approach (or any sporadic combat even) very difficult and frustrating simply because of technical problems and unintended challenge. 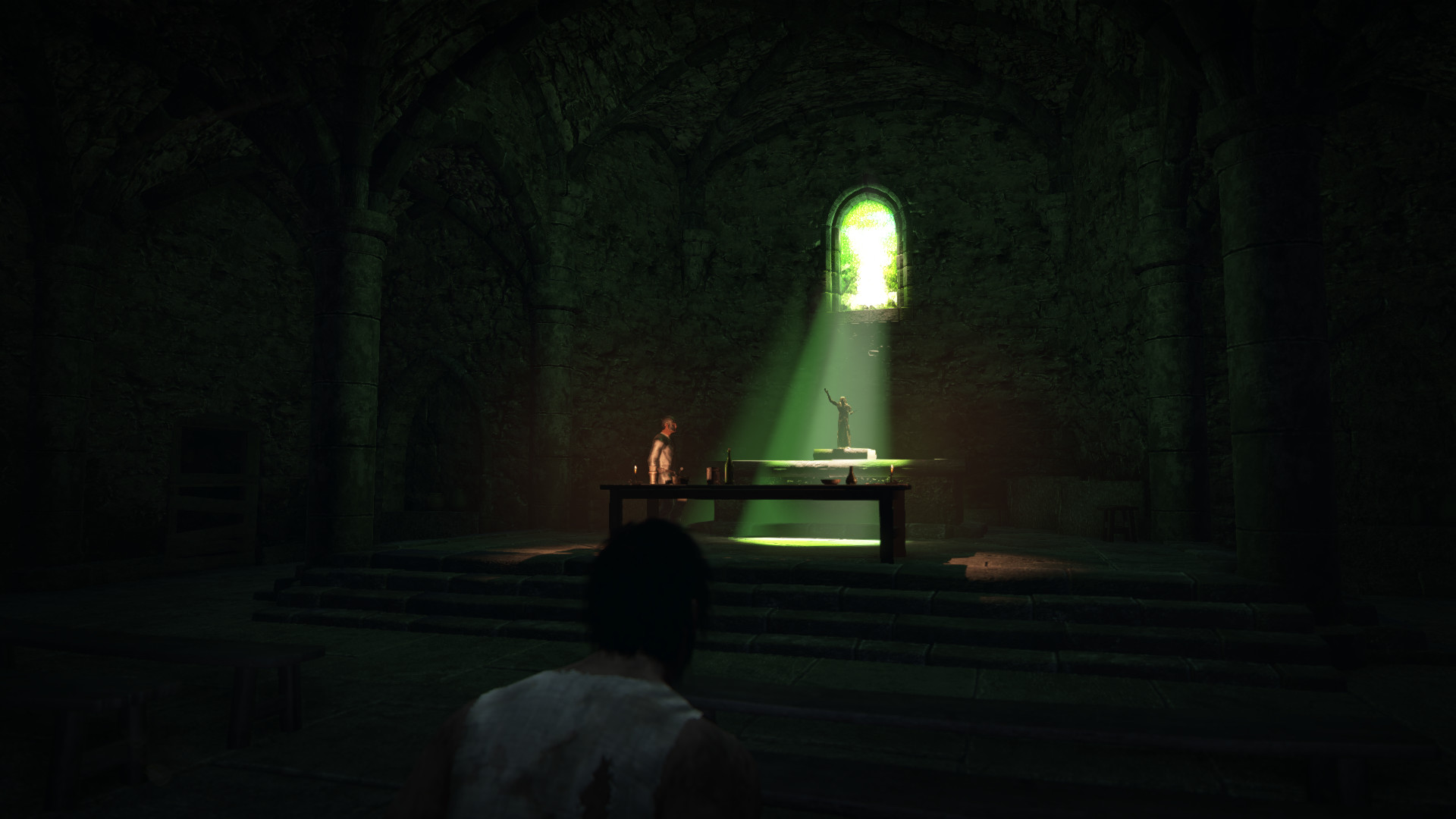 Content
Because of said technical problems I have not been able to finish this title, or even get very far in it, so I cannot say muxh about the total content / playtime of it.

Balancing
Generally, I noticed the enemies will take out a very consistent chunk of your health when fighting if you get hit, even with armor / some protections on (looted from dead enemies), while the player character will take many more hits to take down an enemy than an enemy takes to take him down. I can quite safely say combat is not completely balanced in a good way, since in a game with this concept and combat system, at least hit damage and effectiveness should be in a 1:1 ratio for player and enemies, but this is not the case. Anyway, with the severity of technical problems in the system itself, balance is only a small part of the issue.

The developer did reply to this balancing issue by saying, “the damage ratio is exactly 1:1 between player and enemies, however armor plays a big part on damage reduction so it might have given the wrong impression. Since enemies usually come with more armor than the player it causes an imbalance, which I will anyway mitigate with a slight damage reduction from the enemies to the player.” 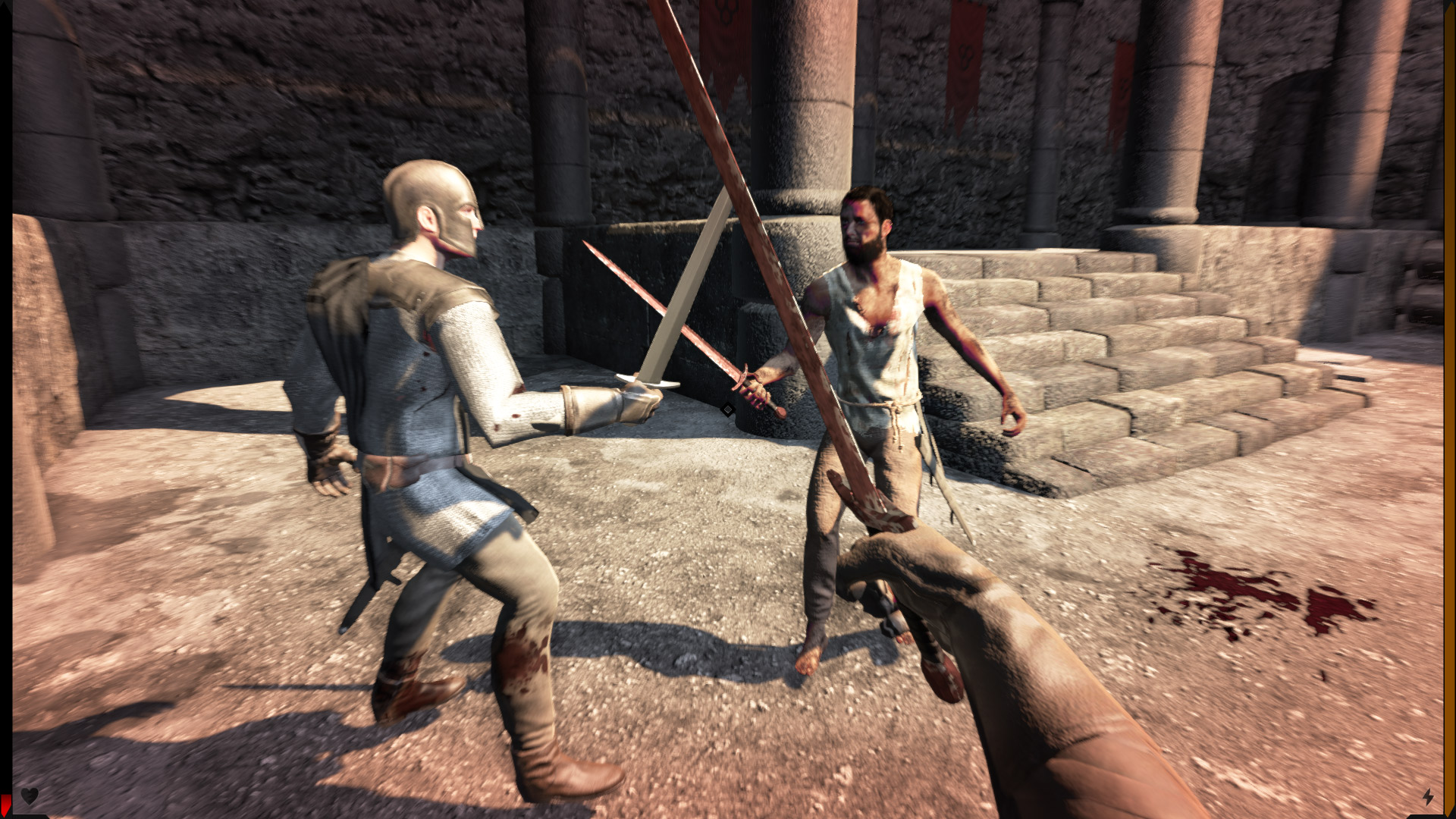 Challenge
Depends on what type of approach you choose. Stealth will put you in the hands of pure luck since sometimes enemies will just spot you for no reason, but it’s still much easier than the Combat approach given all the problems the combat system has. Honestly I cannot give a serious Challenge rating, since the Combat, which is the main challenge source, has severe problems.

Graphics
The graphics use Unreal Engine 3, a solid and reliable engine with a decade of development. Generally speaking the graphics are not too bad, with some decent light effects and textures. Although Elium‘s overall appearance is somewhat “dirty” and unpolished, it has a good feel and atmosphere to it, and is satisfactory overall as far as eye-candy goes. Environments could do with some more elements and particle effects to make them a bit more “immersive”. The quality of models and meshes is acceptable though not stellar.

Sound
Sufficient, with nothing to mention in particular.

Performance
I tested Elium on 1440p first and got an average of 20-25 FPS, then I passed to 1080p to get an average 35-40 FPS with drops of even lower than 20, with all settings maxed out. The test rig has an i7 4820K, 16GB RAM and a GTX 1080 in it, so this hardware is way above the game’s recommended specs. This game simply runs terribly because of performance / optimization issues, and if it runs so badly on a high end config like this one, I cannot fathom how it will run on lower ones. These performance issues cause stuttering and FPS drops all over the place. During combat this can prove devastating, on top of all the other issues.  The developer did contact us about disabling “indirect illumination” in the settings, but it still gave poor FPS results both before and during recording including a subsequent recording made after the first to test this. 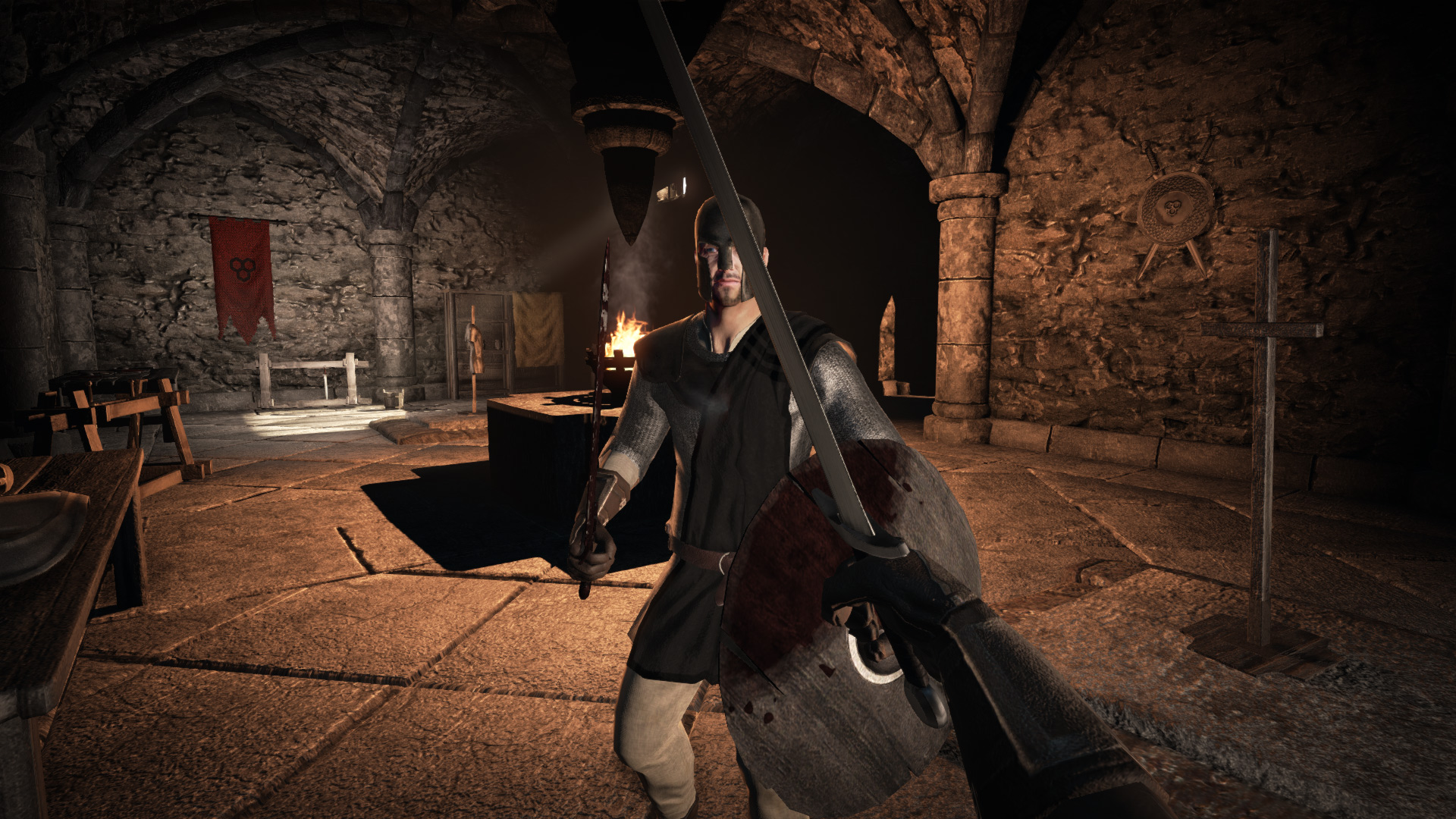 AI
Enemy AI has particular difficulty detecting the player from Stealth. The detection can feel completely random as sometimes you get spotted from miles away while other times you can be right in front of some enemy and not get spotted at all. According to the developer, “the amount of light touching the character determines the visibility and staying in the shadows will leave you undetected”, so guards cannot see you in the dark.  That may explain some of the issues, but overall in general gameplay it can be hard to determine if it’s working adequately.  Enemies follow fixed paths like in most Stealth games, while in Combat, enemies will vary their attack directions randomly trying to hit you. There is nothing else to mention about AI.

Quality of Life
Inventory and interface are decent enough, no particular problems, while the control system regarding attack directions etc. is completely awful.

Bugs / Issues
No issues to report.

Elium Prison Escape is a roguelite action game with surely some potential. It tries to use some innovative concepts, but fails to deliver because of technical issues and lack of polish that can completely ruin the combat overall.  Hopefully, some updates and fixes will alleviate these issues, as it seems the developer is open to discussion and will be addressing these issues with fixes.