Fancy being the only inhabitant of a junky space ship, forced to live out your life earning a profit for a faceless corporation with only an interactive script for company?

You play a convict-turned-involuntary-employee of Astra Deep Space Solutions, indentured to the interstellar mega corp for an undisclosed length of time. You work off your debt to society by taking on the role of pilot/engineer of a one-person Deep Space Vehicle (DSV), tasked with mapping out a nebula many light years from home.

In your new life your only direct company is the wittily named URSA artificial intelligence, who tries to keep you alive and optimistic through the many trials and tribulations of your everyday existence on the frontier of space.

A player’s first introduction to Deep Sixed is the beautiful pre-title credit animations and wonderful music. This soon finishes and is replaced by the title screen, which features a 3D animation of a rather derelict looking space ship — your new home — and a relaxing minimalist title track.

The game itself is played from a first-person view and is made up of nine rooms (one at base and eight in your DSV), point-and-click-adventure style, with relatively minimal animations for most and a number of highlightable interactive zones. Most of these rooms are overwhelmingly busy for the novice, but I suspect that’s part of the game’s intent and charm: to throw you in the deep end. Your view of space is always very small, and a bit disappointing, through the viewing room windows. 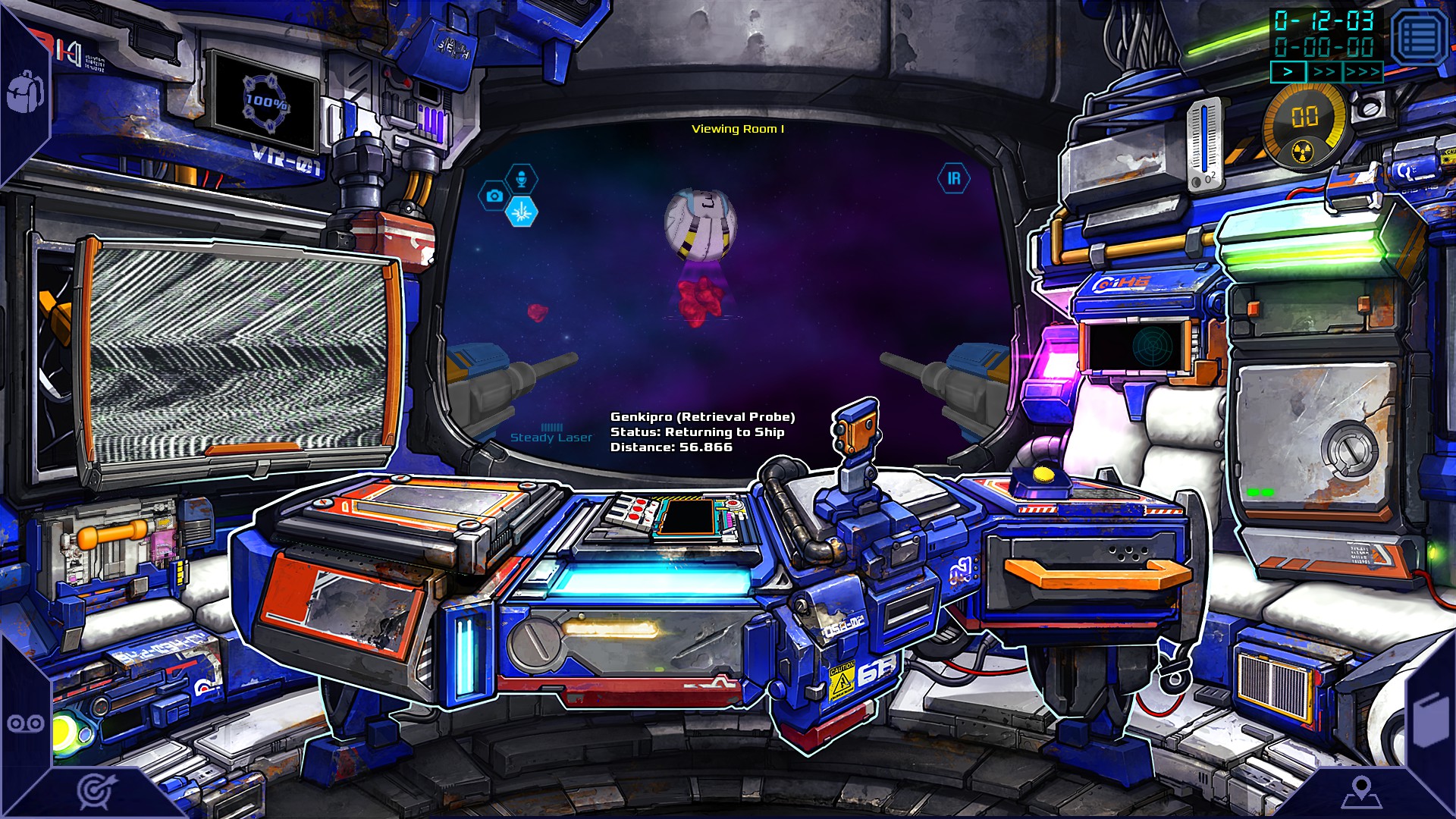 As you play you get to know the rooms and their zones better — mainly through trial and error, and reading the helpful (but not too helpful) in-game DSV manual — but the interface can still be annoying. Each of the five observation rooms is not identical, with a few different layouts that will invariably cause you to waste time when you really can’t afford to. Inventory management is a bit fiddly, and I always find myself pressing room hotkeys when they’re disabled (e.g. when the guns are active), clicking when I need to right-click, or right-clicking when I need to left-click somewhere special on the screen. It just seems unintuitive, though maybe that, too, is deliberate. 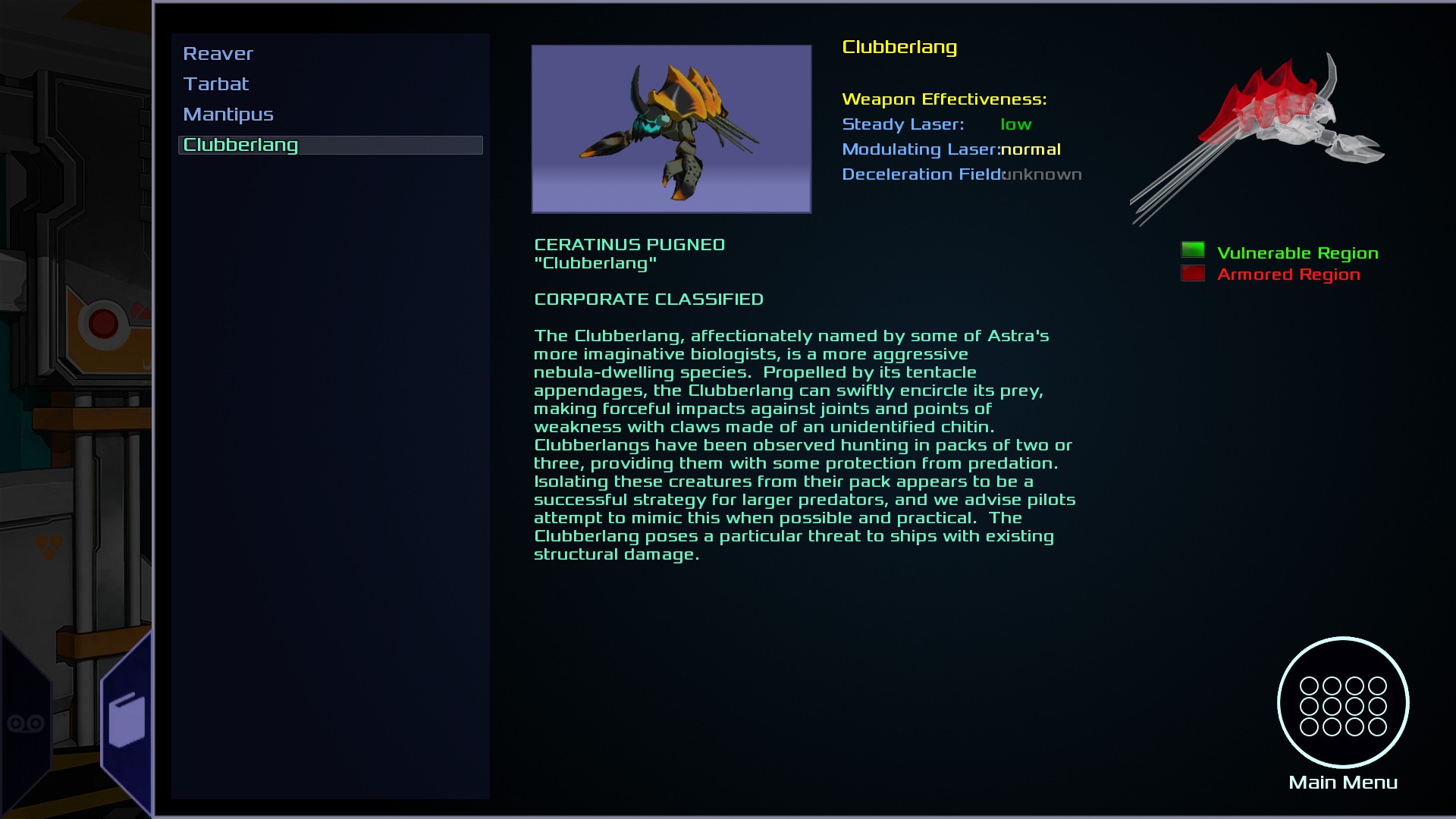 Sound effects are good, though nothing stands out as being unexpectedly brilliant. Music is excellent throughout, like an instrumental cross between Massive Attack, Air, and a late-night piano bar. It’s really, really good; this is one game for which I’d go out of my way to buy the soundtrack. The game’s script is also fully spoken (at least to where I’m up to), with all of the dialogue being between the unnamed female protagonist and the “not an interactive script” AI, URSA. 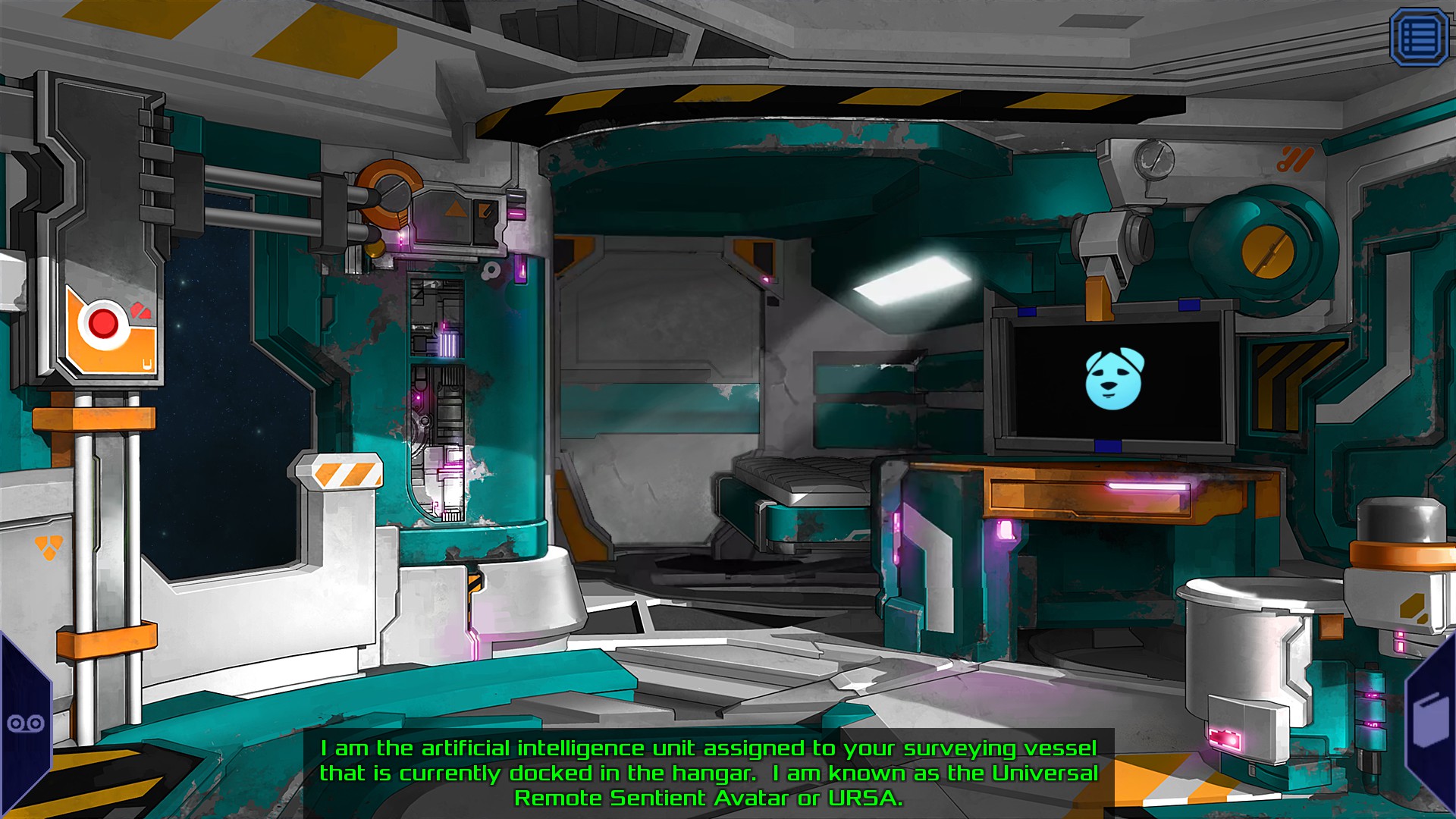 There are some animated cut scenes, which look quite nice until they move; the animation is rather poor. There’s a lot of text in the game and, unfortunately, quite a few typos and grammatical errors. It’s a lot better than many indie games, but could really use a professional editing pass. There are no performance options or graphics settings apart from a full-screen/windowed toggle, but sound effects, music, and speech all have separately adjustable volumes. 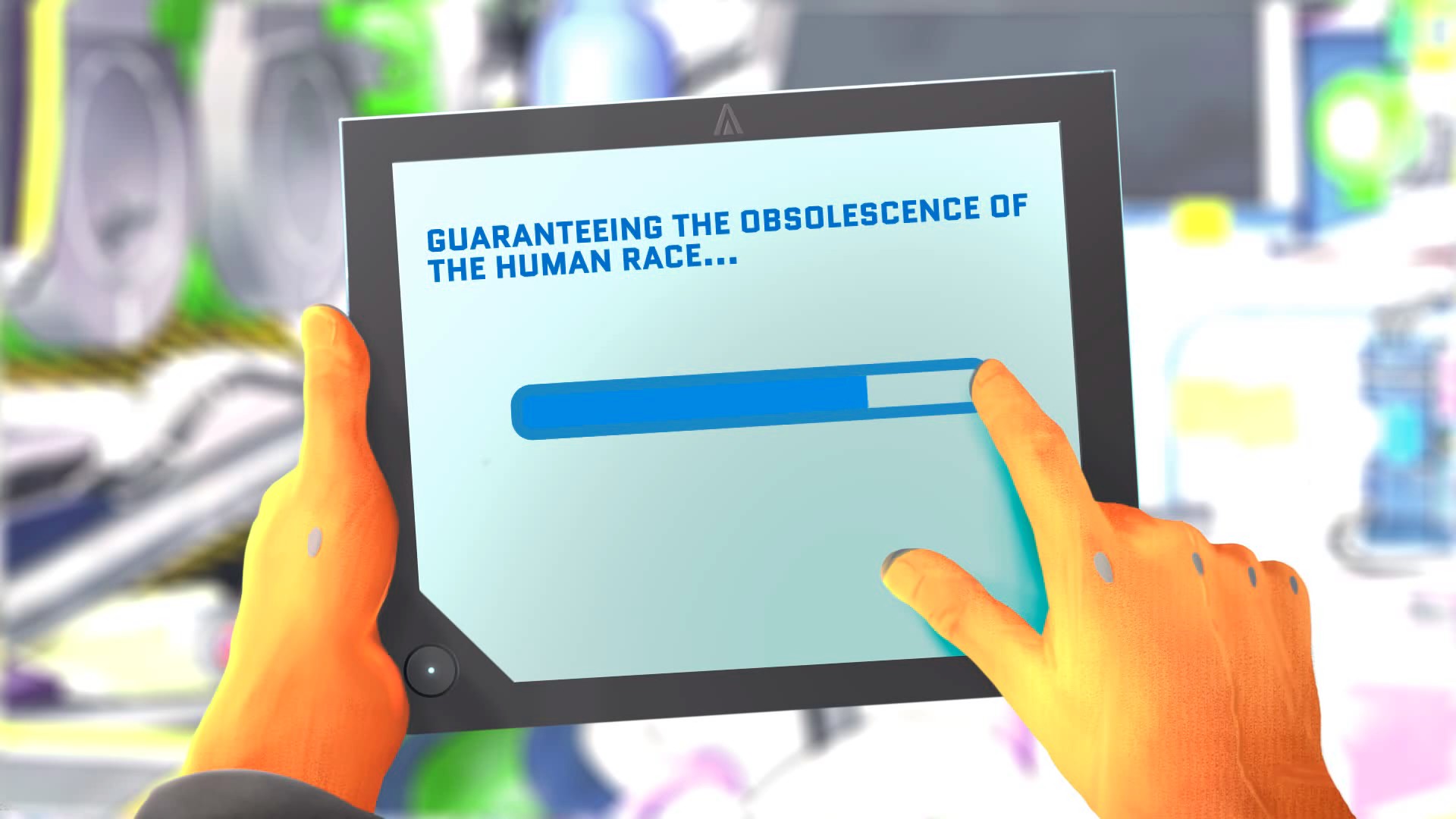 Deep Sixed is a weird game. It’s like a cross between a first-person point-and-click adventure game, whack-a-mole, and a space craft simulation, bundled with rogue-like elements such as perma-death, procedural generation, and an evil random-number generator. 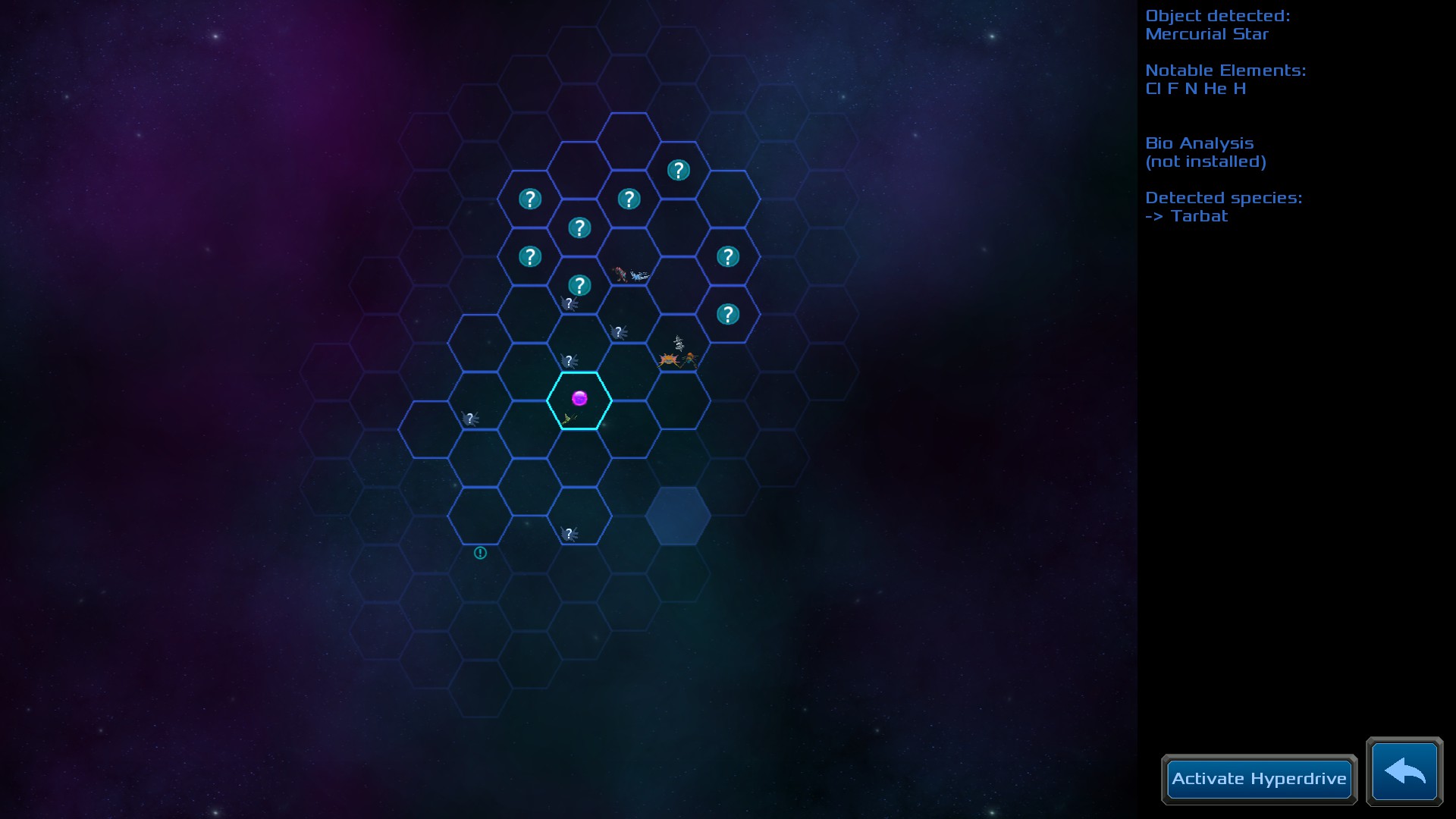 The game throws you in the deep end from the get-go, with a rudimentary tutorial that covers the basics — navigating, targeting, and using the technical manual — and then leaves you on your own. This trial by fire makes sense in terms of the game world, but may turn off some players; the learning curve is very steep and when you couple that with the deadly RNG, the first few hours’ play can be extremely stressful.

Your ship, to put it bluntly, is a piece of junk. Anything that can go wrong will, usually at the worst possible time. I’ve had to rush down to refuel the engine in the middle of randomly spawning waves of aggressive space fauna, only to have the fuel tank door get stuck, spewing radioactivity into the cabin while I repeatedly bash it with a wrench, then rush back up while URSA cheerfully told me that the radiation scrubber was broken … ARGH! 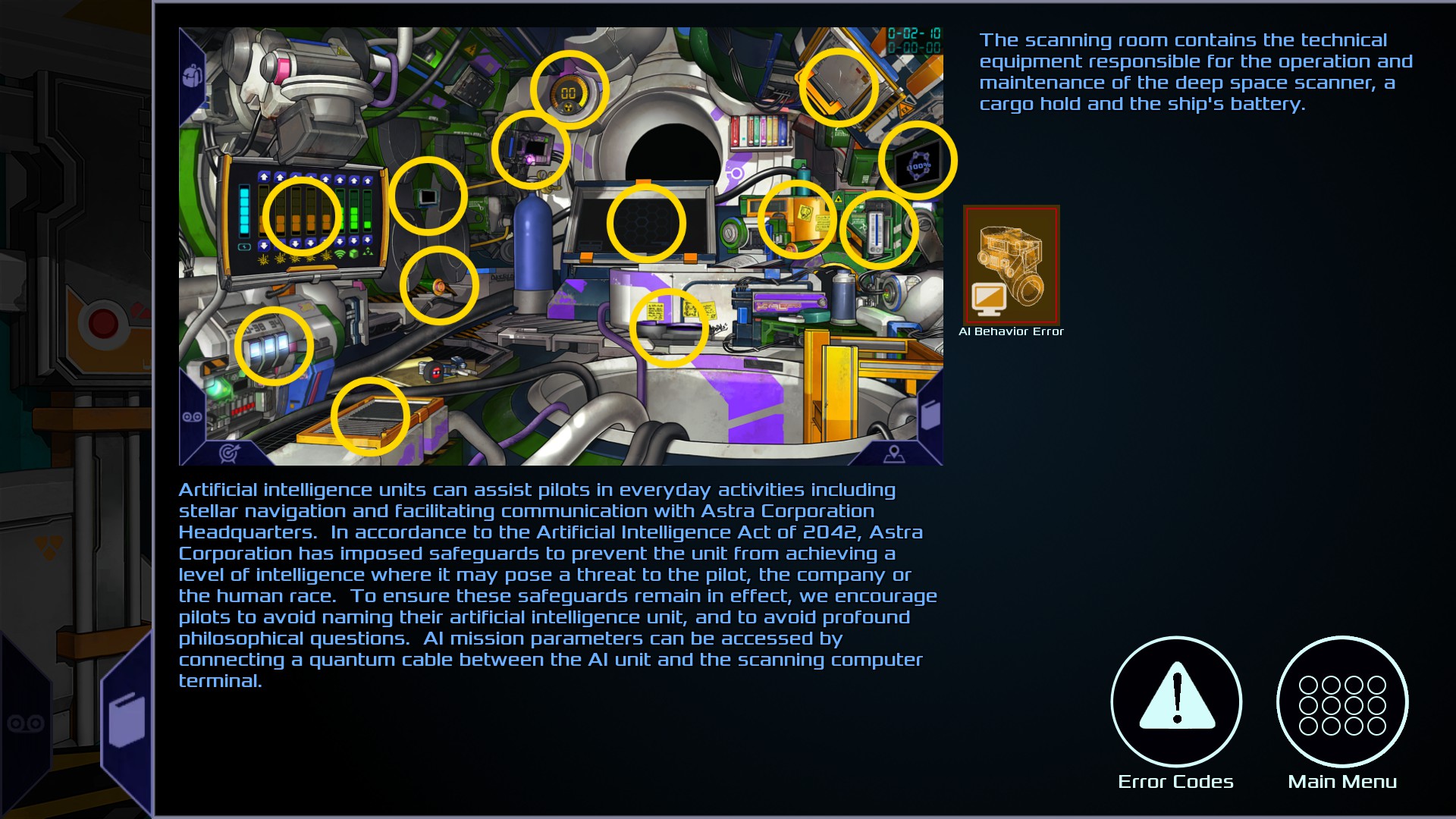 To make it even more challenging, when you begin you have only a small array of spare parts available; you have to purchase others in advance with reward points that can only be earned on successful missions, guessing what might break in the future. Those same reward points could otherwise be used to repair your ship’s structure or purchase one of the many upgrades available for your ship (many of which also require raw materials, which you have to find and collect in-mission), but if you actually do that then you’ll invariably find that you’re out of a key spare part when you most need it.

Core gameplay involves allocating limited power from your ship’s battery to key systems: scanning, hyperdrive, weapons targeting, and weapons in each of the five observation bays. But using many of these permanently drains the power, which can only be regained by feeding the engine from your limited radioactive fuel reserves, which, you guessed it, cost reward points to replace. To me the power use is a bit too severe and unavoidable for it to cost so much to replace; doubling the units per purchase would be better balanced, I think. The in-game manual (especially the troubleshooting section) is invaluable, but when everything is going wrong it’s hard to remember where certain components are located, both in the manual and in the ship, and the inconsistencies between the different room interfaces can make it even harder sometimes. In some ways this adds to the charm of the game, but it can be aggravating. 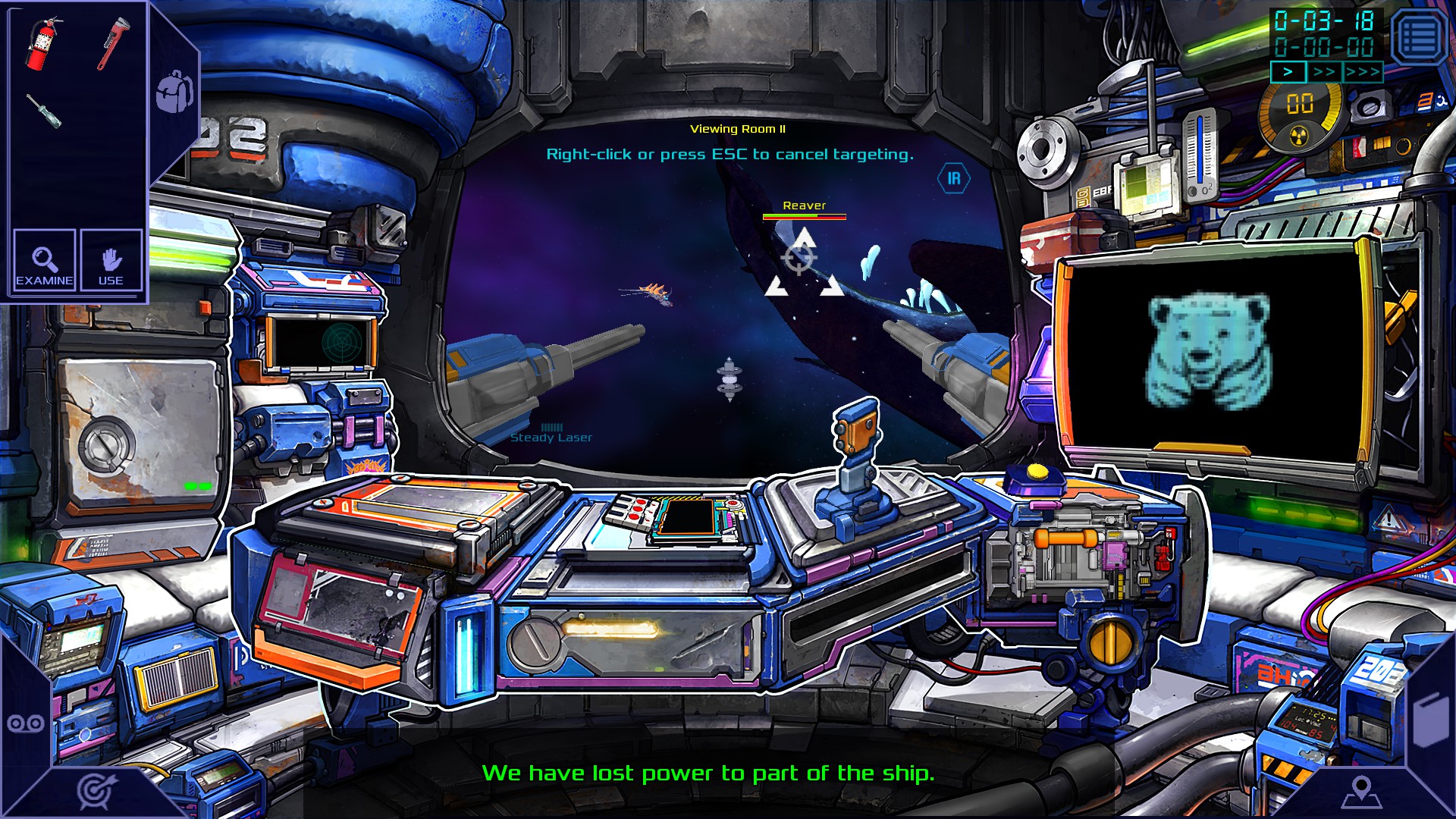 Perhaps the most annoying thing to me is that the game won’t let you effect repairs when you’re back at base. Sure, you can repair your hull, but nothing else. I managed to hobble back after a particularly gruelling bad-luck session, expecting to be able to work out what was wrong with two of my viewing rooms and fix my scanner. Then I discovered the only way back into any of those rooms was to start another mission. As you’d expect, that didn’t go too well. This design decision maintains the hectic always-on-the-back-foot approach the game takes to everything, but completely breaks the immersion; why can’t I fix anything in the relative safety of my base? 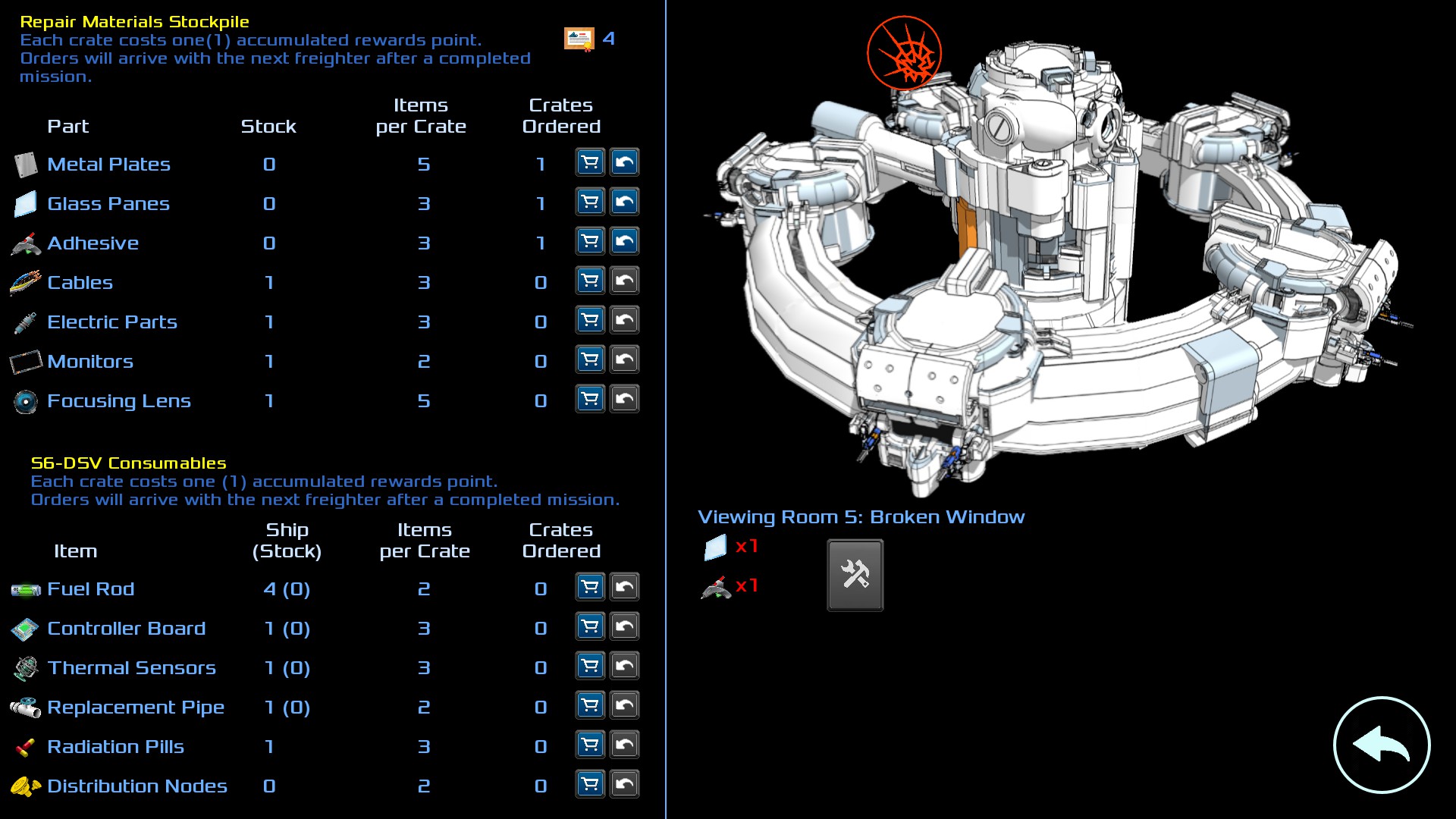 The game has a great sense of humour, though, and the core gameplay works well. Combat is a bit of a weak point — the view screens are small and combat too simple — but sometimes you can avoid it, which I’d definitely recommend! The rogue-like elements mostly work well, though the challenge is perhaps a bit too much for new players. There’s no progression between games; once you die everything resets, and unfortunately there’s no way to skip narrative sequences, which are the same each time you play. This means you end up skipping through dialogue line by line, which is admittedly only a small annoyance. 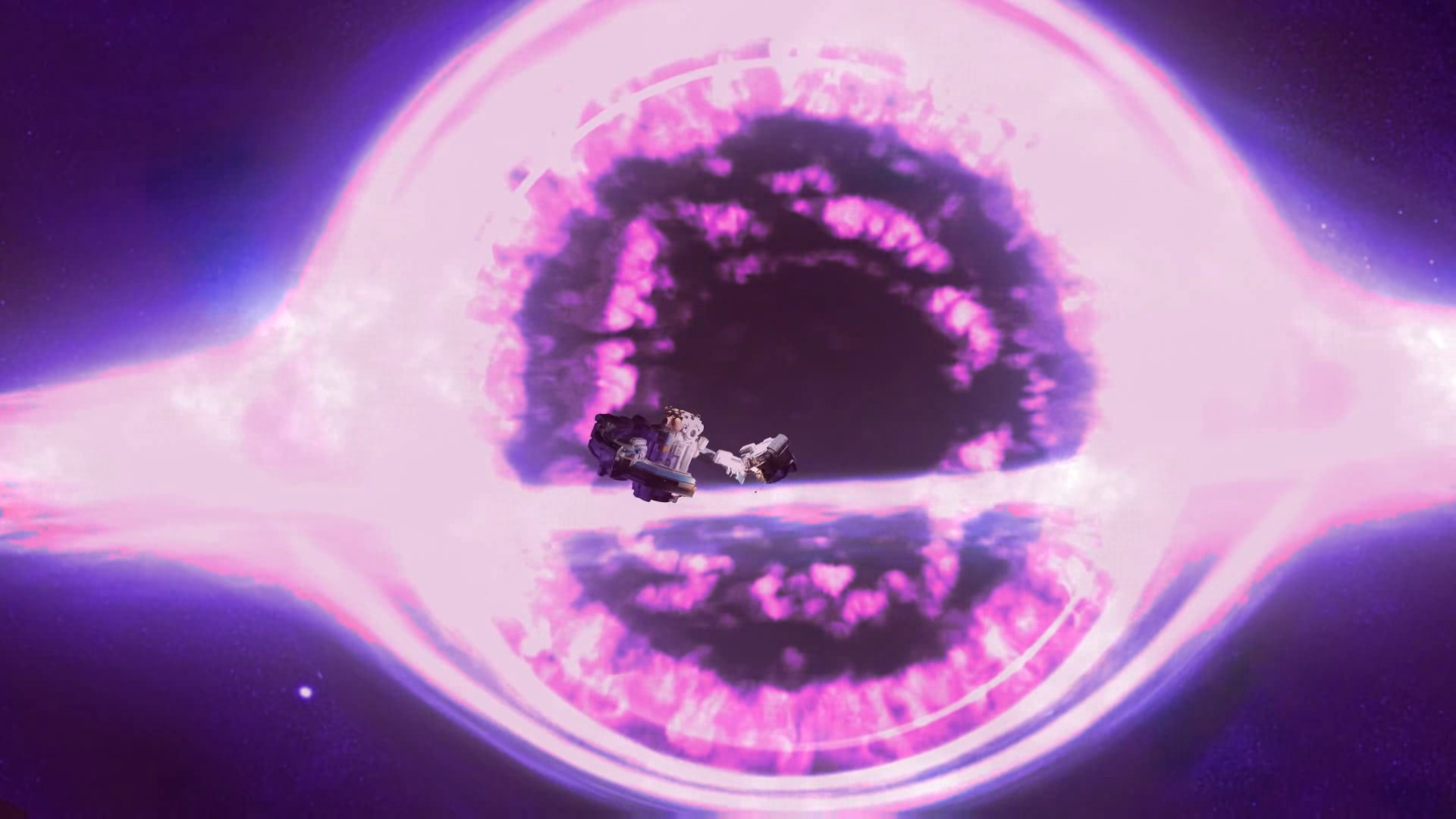 Deep Sixed is not what I expected. It is not an FTL ‘clone’. It’s not quite like any other game I’ve played. That’s not to say it’s bad, just different. I’d urge anyone going into it to do so with eyes open; the difficulty curve is extremely steep and the RNG unmerciful, and some design decisions make the game more frustrating than it should be. But if you like a seriously stress-inducing challenge with a good dose of humour and great music, Deep Sixed could be the game for you.