Save the world from the Illamanati, a terrorist organisation that has turned Llamazon’s faithful delivery llamas into psychotic creatures of destruction.

Vicious Attack Llama Apocalypse (VALA) is the debut Steam game from indie developer, RogueCode (PTY) LTD. According to the official website, it is “the world’s best mass llama-slaughter roguelike-lite-ish couch co-op twin-stick top-down shooter”, and I was rather surprised to learn that Jeff Minter was not involved in its development.

You play a dedicated employee of worldwide retail delivery company, Llamazon, in control of a prototype assault mech called RONALD (it’s a silly acronym). From the safety of your desktop aboard a state-of-the-art battle cruiser which is docked just off the coast of Santa Llama City, you can control and oversee RONALD from a drone high above the carnage as you drive the mech through wave after wave of angry llamas.

You see, an ex-Llamazon delivery guy became dissatisfied with Llamazon’s money-saving and profit-driven attitude and formed the Illamanati, a terrorist organisation. Somehow the Illamanati managed to reprogram the control chips used in Llamazon’s delivery llamas and now those llamas are rampaging all over the world, destroying everything in sight.

Can you and RONALD — and an impressive llama-focused arsenal — stop them?

VALA is played from a 3/4 top-down fixed isometric camera view, ostensibly transmitted to you from a drone hovering above RONALD. You have no control over the camera, but the fixed view works fairly well. A cool static filter and occasional glitches improve the immersion of the video feed from the drone, but it’s a shame you can’t zoom in and out by causing the drone to ascend or descend; it would be great to be able to get a view of a larger area, in lieu of a map. 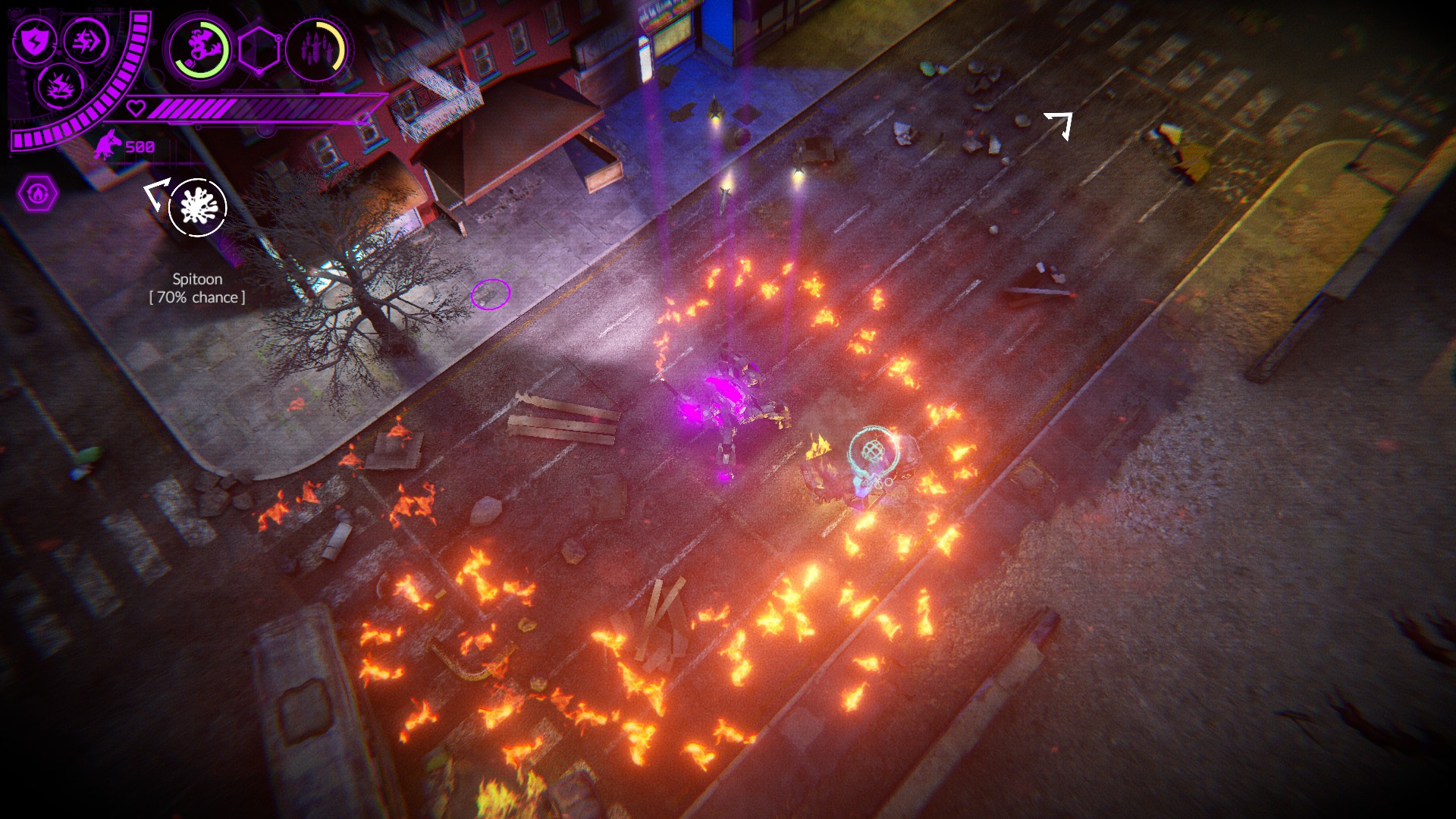 Graphics are impressive, with RONALD lit up in nicely glowing lights of the player’s colour (there are five from which to choose). Batteries are also colour coded, as are some of the weapon and targeting effects. It’s a simple effect, but very cool. Lighting and shadows are excellent and most of the weapon effects look very nice indeed. 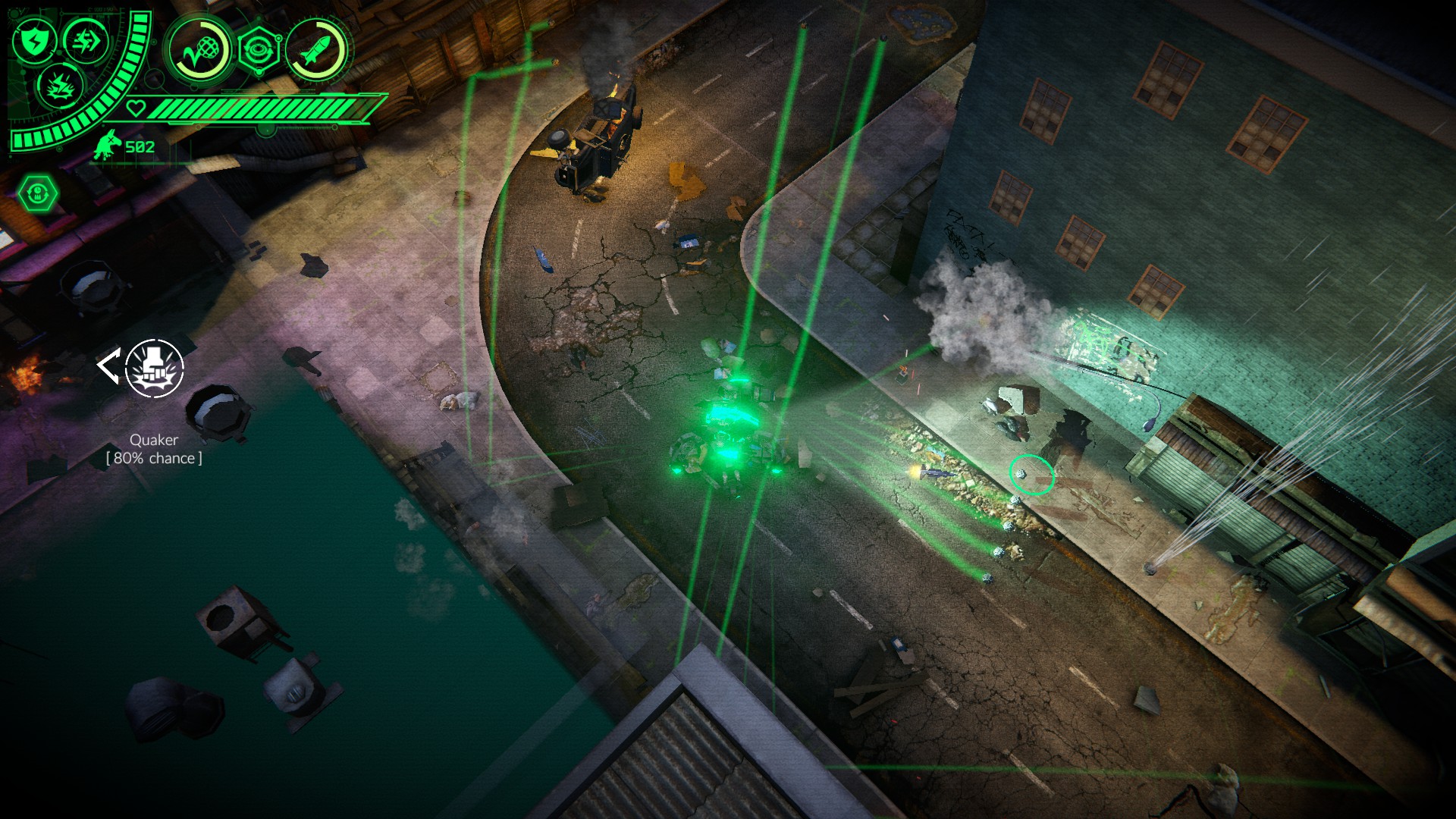 World graphics are good, with lots of destructible objects, but there’s not enough variation. Even though your path through each area changes with each play, you’ll very quickly encounter all of the available procedurally generated components, and it all ends up looking very samey.

The user interface is simple and effective, also coloured for each player. One thing that confused me in the pre-mission menus, though, was the “SELECT” button on the armory and perk screens. I expected it would let me select unlocked items for use in my next play, but it doesn’t do anything at all. 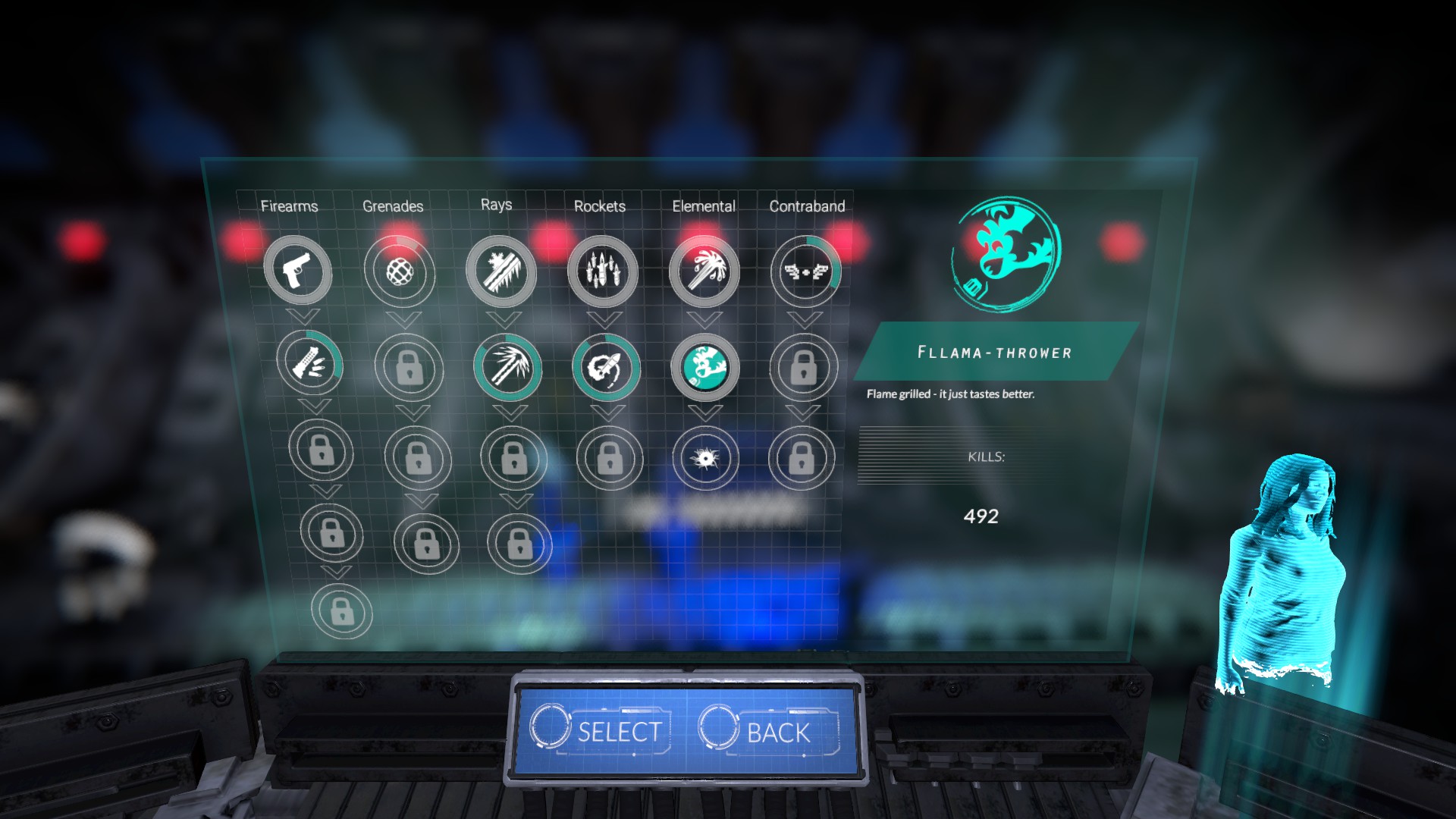 Sound effects are good, too, with clunky mech footsteps providing a backdrop to the cycles of intense combat and relative quiet. Weapons and explosions are meaty and satisfying, but some of the llamas sound a bit odd, like Speedy Gonzales. Background music is fairly quiet and forgettable, but it does prevent silence in the quiet parts of the game.

Melissa, your ‘eye in the sky’ advisor, is professionally voiced. She does a good job, even when the script occasionally has her make some pretty woeful comments. The talking doors are hilarious, too. Video sequences are well made, both CG and live-action, but it’s a shame the starting drone animation isn’t skippable; after watching it dozens of times I’m getting a bit sick of it. Grammar is excellent; I’ve only noticed one typo so far.

I haven’t noticed any stuttering on my GTX 1070 laptop, but there’s a detail level slider and a couple of options to play with if necessary.

VALA is a twin-stick shooter with rogue-like elements. Your control RONALD’s movement with your left hand and aim its weapons with your right. RONALD has two weapons, fired and reloaded independently, and three abilities that require energy to use: a jump smash, which does a circular area of effect attack; a dash, which damages anything you move through; and a shield, which prevents all damage while active. If you’re lucky you’ll also find passive perks that increase RONALD’s effectiveness, and single-use special powers, of which you can only carry one at a time. There’s full controller support, but as is normal for twin-stick shooters, I prefer the precision aiming provided by the mouse. Controls are responsive and the default control layout for both devices works very well.

There’s a brief tutorial that you seem to only be able to play once. It’s well done and explains the different controls and how to use them. One important point to note is that there’s no healing; though RONALD has plenty of armour to begin with, it will slowly deplete with each llama bash, spit, or explosion. Each level you have to eliminate all llamas before the chatty doors will open to let you through to the next. 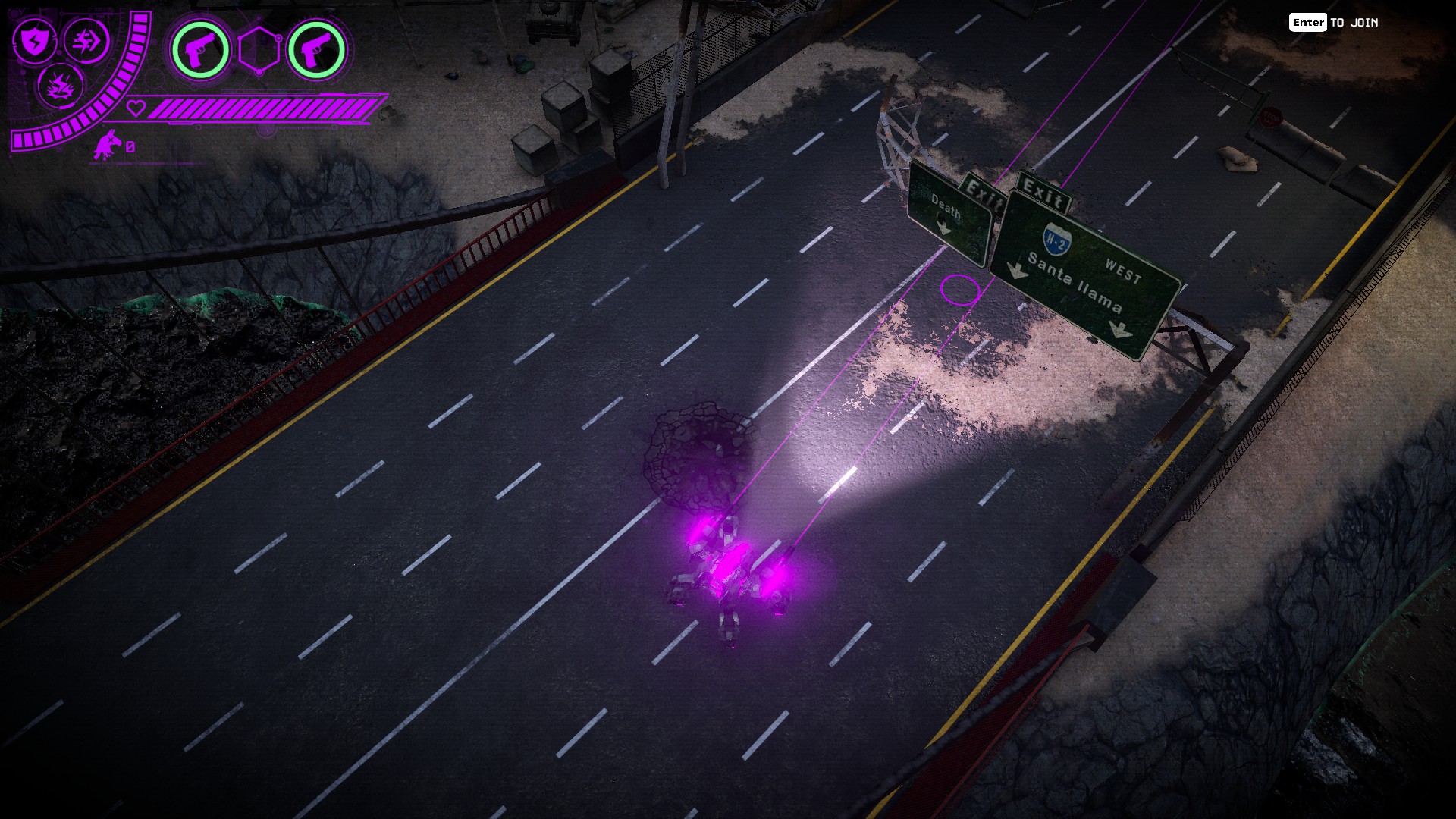 The store page mentions endless mode, though I can’t see that anywhere. It could be that it’s not yet in the game (my review copy was pre-release), or perhaps it has to be unlocked. There’s also multiplayer support, but only local (i.e. on a single PC). I wasn’t able to try this, either. The main appeal for me, in any case, is the single-player campaign mode, which has you trying to stop the Illamanati’s evil plan across multiple procedurally generated regions of the city. I believe there are four regions, but I’ve only reached the second one so far. 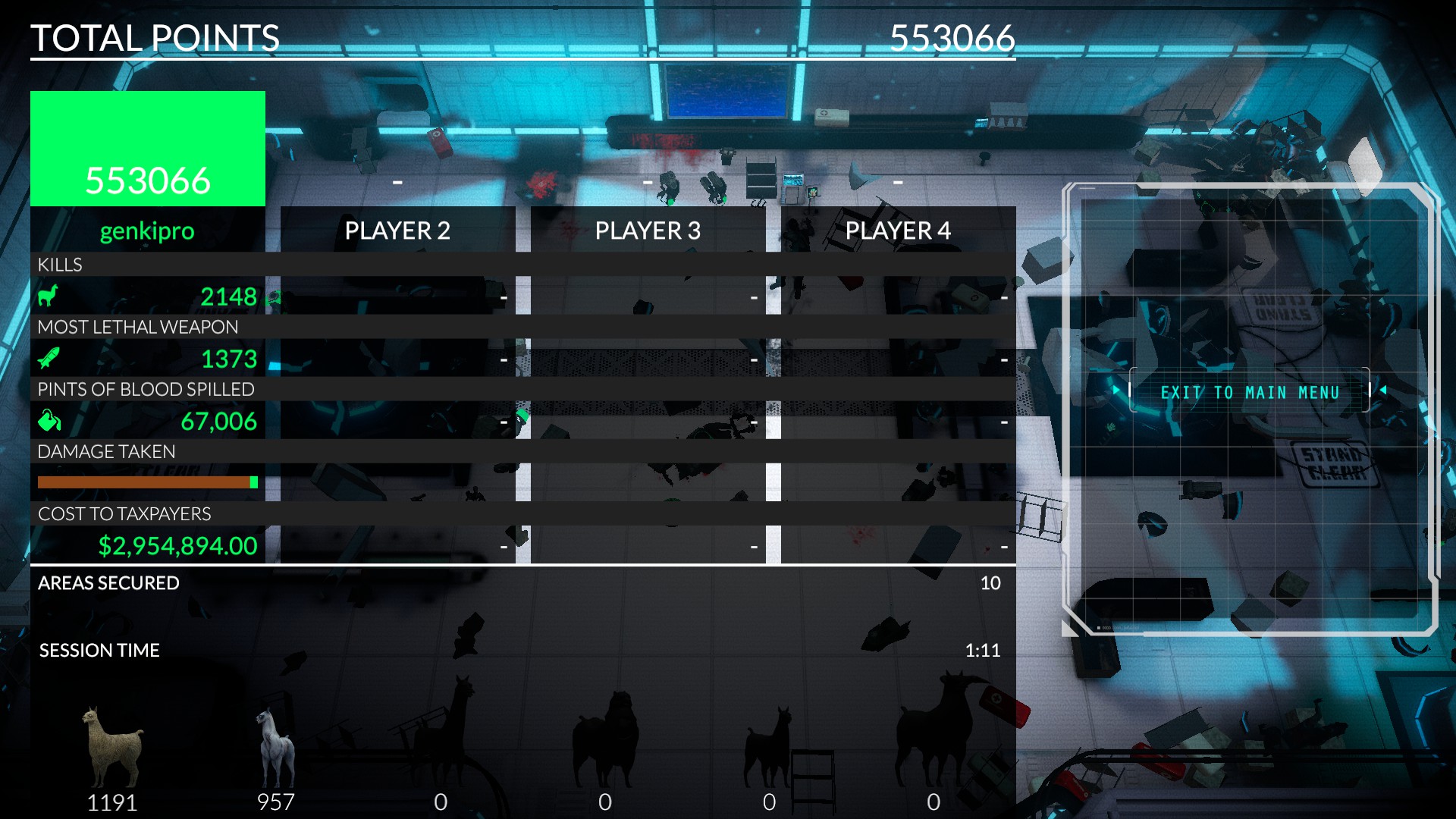 You begin the game with two pistols and no perks. Weapons and passive perks are unlocked through killing specified numbers of llamas with certain other weapons and completing specified missions, respectively. These missions are typically simple things like “Destroy 10 lamp posts” or “Kill 500 llamas”, but they provide you with an extra short-term goal. Once unlocked a weapon or perk is not automatically received, but it is immediately added to the pool used for each loot drop, so there’s a chance you’ll receive it at some point. Or you might get yet another pistol drop … . 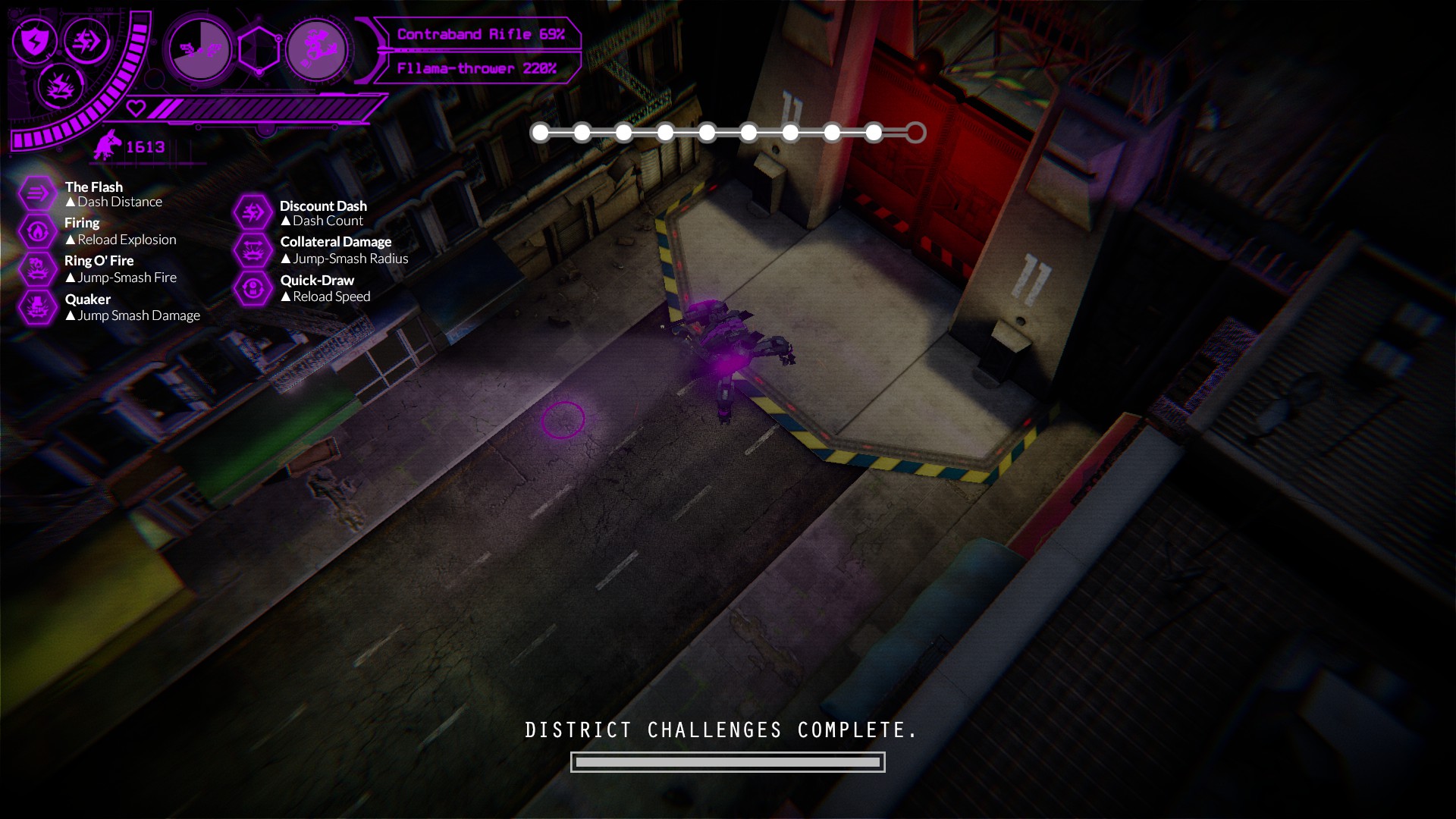 One frustration is the almost complete lack of health regeneration, combined with a player character that’s slower than many of the enemies. This results in every play through turning into a war of attrition in which you try to stave off health loss for as long as possible while hoping for good random weapon and ability drops. This could be said to some degree of most games with rogue-like elements, but RONALD’s relatively slow speed and low damage output with the starting weapons make it very frustrating here.

One way of improving this and making progression more rewarding would be to make the “SELECT” button on the pre-mission armory screen actually do something. As it is, the unlocks only add to the pool of random drops; there’s no guarantee they’ll be available to use.

I also think the damaging explosions are overdone. They do too much damage to RONALD and the visual area of effect seems to be slightly off; I’m sure I’ve been hit when standing just outside of it. The game would be better if explosive damage were reduced. Oh, and I can’t work out what is going on with the Tazer. Sometimes it works and other times it just shoots out and does nothing. 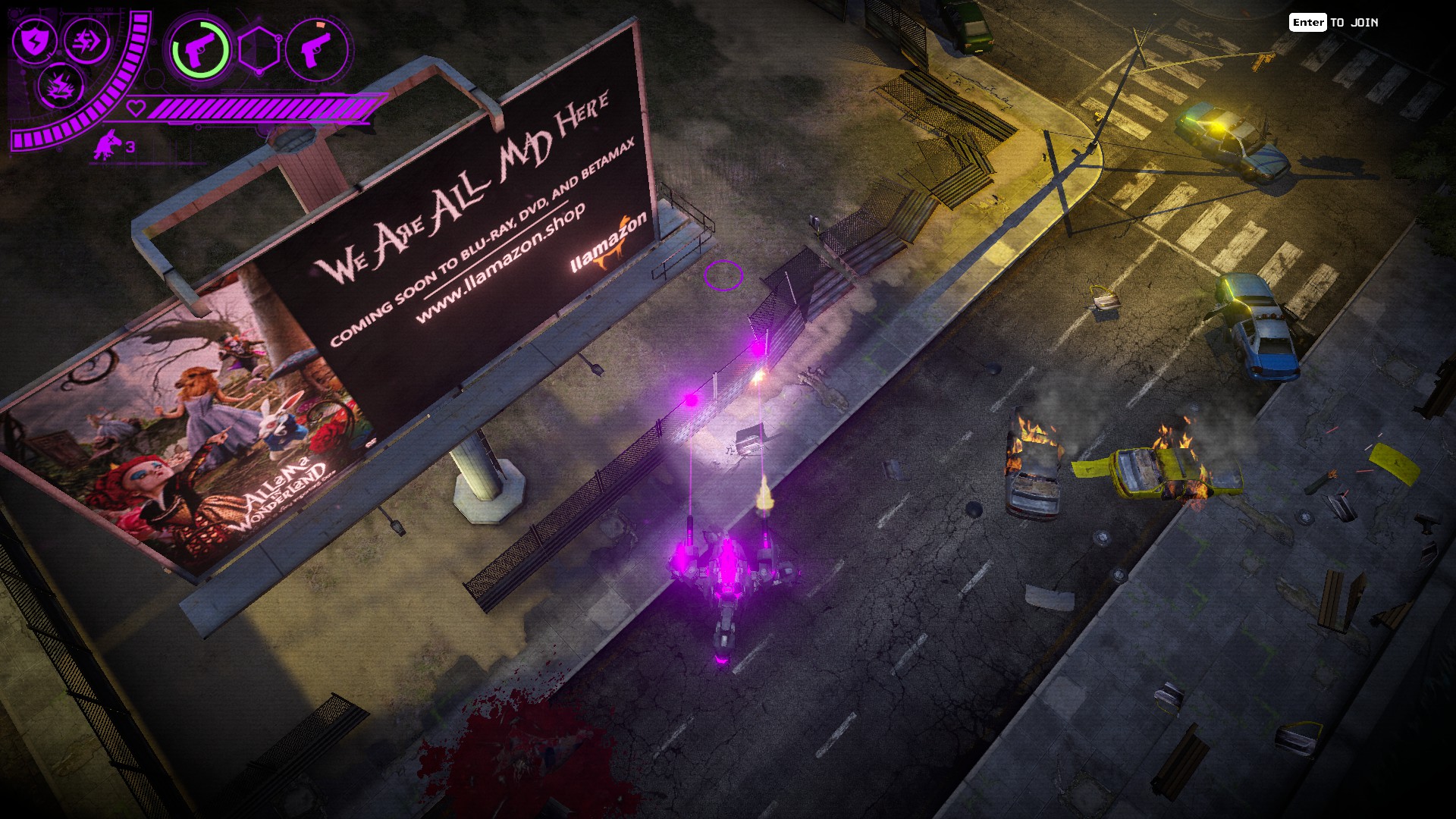 Vicious Attack Llama Apocalypse is a solid twin-stick shooter with a silly sense of humor, a good range of weapons, and excellent presentation. There’s not a great range of enemies, however, and in spite of the procedural generation, every level ends up feeling much the same as all the others. The unlockables provide a sense of progression, but this is not sufficiently realized with random weapon drops.