Verdant Skies is like a cross between Harvest Moon and Animal Crossing … in space!

In Verdant Skies you play an eager space colonist who has signed a contract to help develop the new colony on Viridis Primus, a lush, beautiful world similar to Earth. The next thing you know you’re the only passenger on a space ship headed for your new home. Not everything goes to plan, however, and your ship explodes while on approach. You survive the crash landing and wake to find yourself only a short walk from your intended destination. All’s well that ends well, I suppose.

You meet Rosie, the friendly resident blind mechanic, and Jade, the officious colony administrator. As the third colonist, your tasks seem to be all the general labour that no one else does: farming, building, harvesting, etc. But never mind; soon enough your work allows Jade to recruit a doctor, scientist, nurse, and more, and within a couple of weeks the colony is bustling with activity.

Verdant Skies looks very pretty, with two-dimensional graphical objects placed into the three-dimensional world, which you view from a fixed camera position. Everything is cartoon-like, with most characters easily recognisable and with their own personalities. The world graphics change dynamically from bright and colourful on sunny days to dark and dreary when it’s raining. Misty early mornings look rather lovely, too. 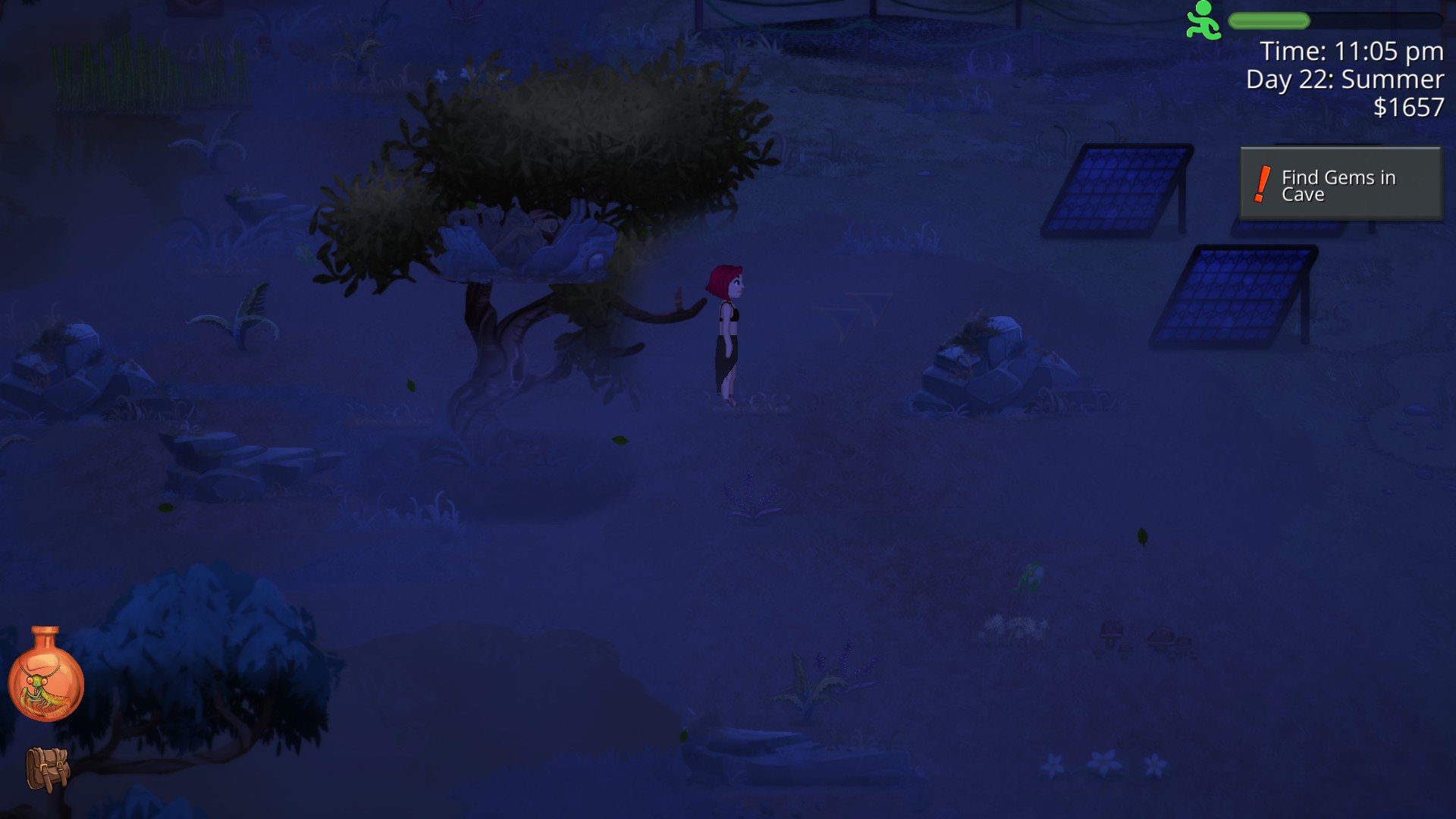 Sound effects are slightly lacking, though what’s here is appropriate and well produced. A few more sounds of life would not go amiss; it’s a lush planet with only a fledgling colony; I’d expect a lot more noise from nature. Speech is all text-based; there are no vocals.

There are plenty of background music tracks that all seem like they could have come from any other game from the genre. Some are almost elevator musak, but still nice, and they keep the world from feeling too lonely. Early in the game you’re given a music box that allows you to listen to various music tracks, too.

There are a few special effects options, including a lovely blurry effect that occurs when you’re getting really tired, but no detail settings otherwise. I haven’t encountered any performance issues, though I have seen occasional Z-fighting, with background objects drawn over the foreground. 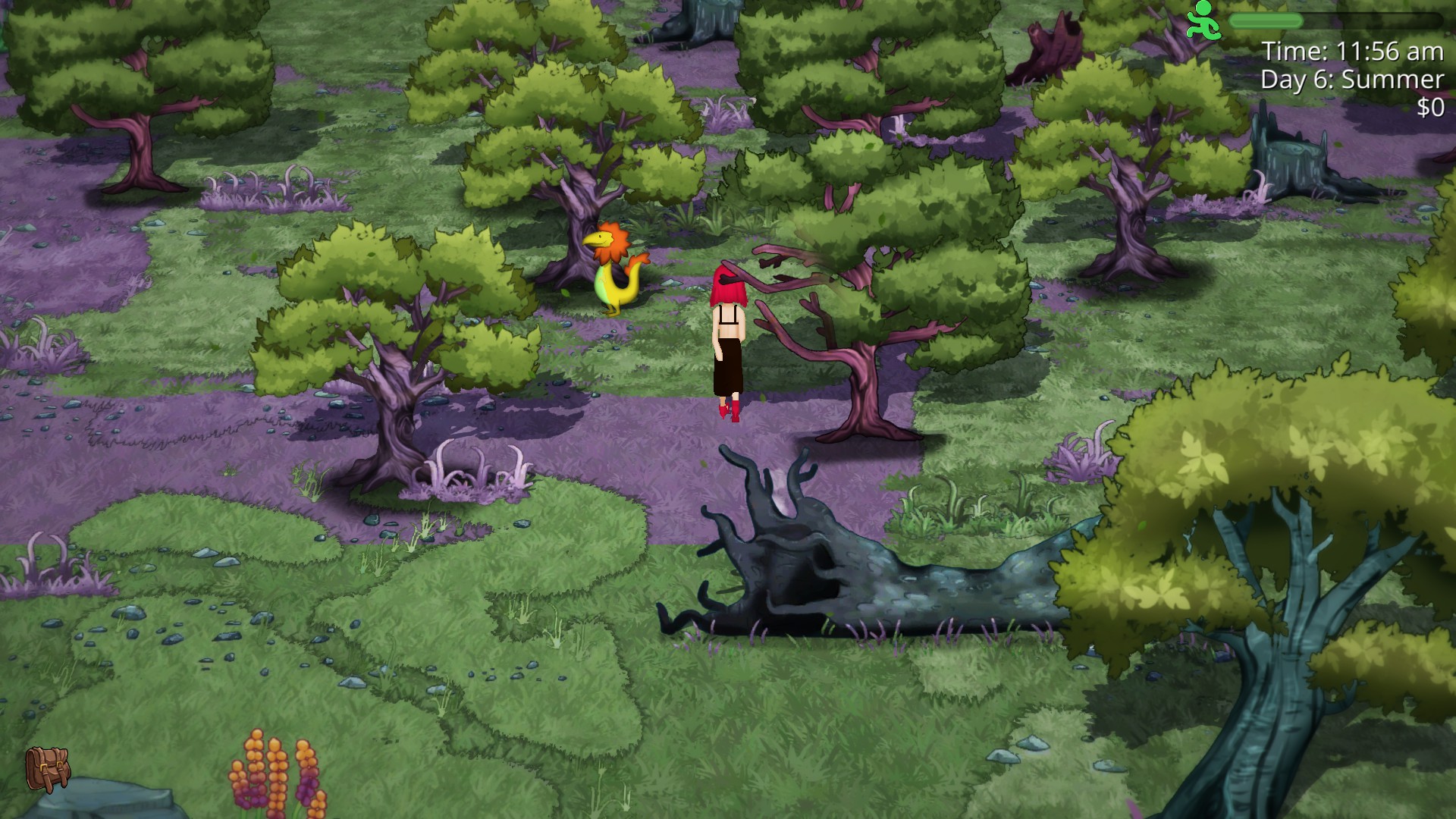 Verdant Skies is a console-style life-simulation game, like Harvest Moon or Animal Crossing. Gameplay is day-based. Every morning you wake at 07:00, do your daily tasks, and then spend the remainder of the day and your stamina bar exploring, harvesting materials, or building new objects. Stamina is recovered by eating, or sleeping, which advances to the following day. It sounds sort-of boring described that way, and in a way it is, but the joy I find in these games is in the developing stories and NPC interactions, and in exploring and discovering the game world.

Basic materials are wood, stone, and scrap (from your destroyed space craft — what the colony did for scrap previously is anyone’s guess), with other materials discovered as you play. Harvesting is stamina intensive, so don’t expect to chop down trees or break rocks all day. Materials are used to extend the colony, build or extend your home, and build tools and other components for use or decoration. Everything respawns within a few days at most. 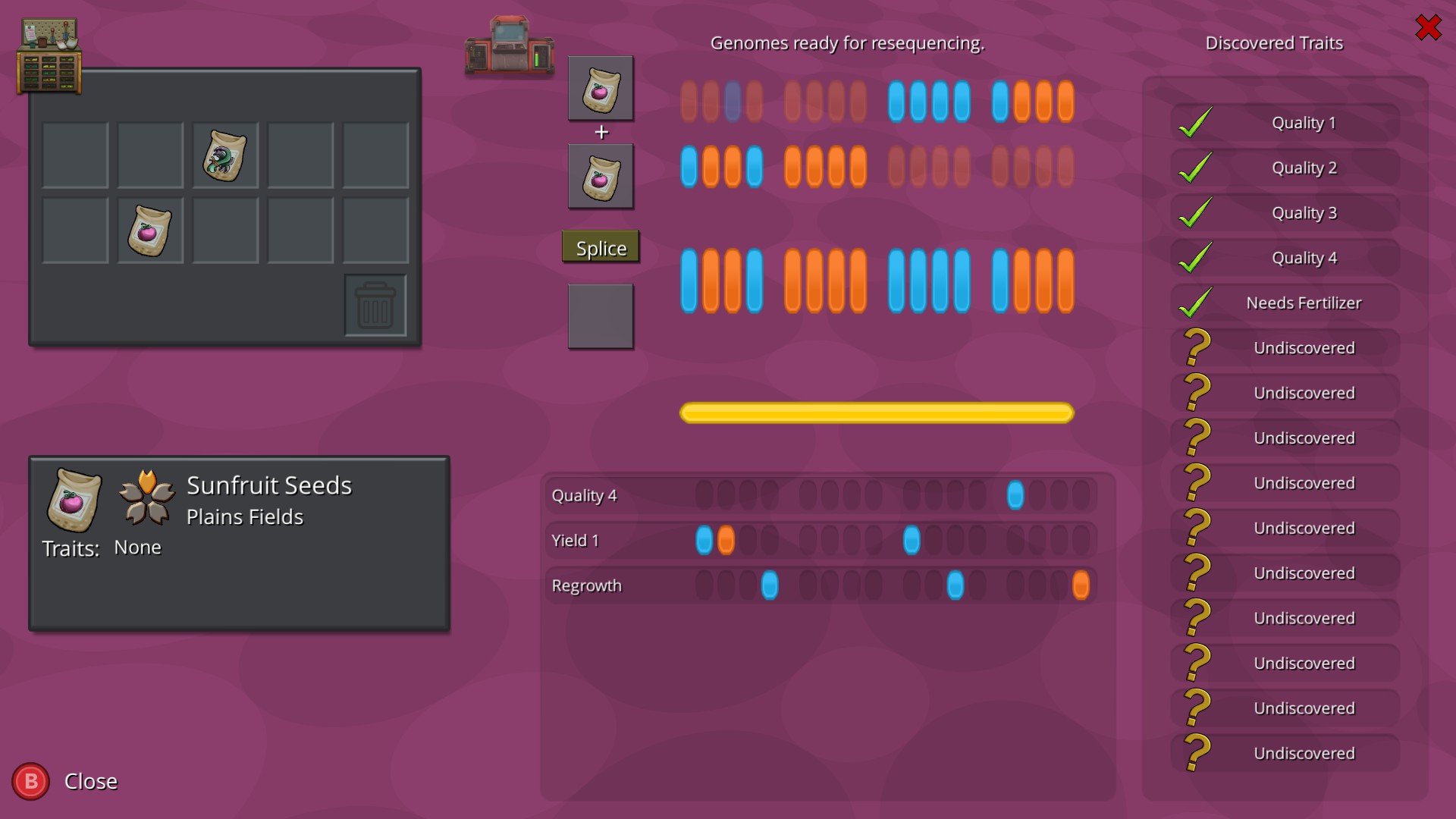 In-game currency is earned by selling things you find, grow, or make. Place what you want to sell in one of the shipping containers around the colony and confirm the sale to watch the container beam the goods off into space, instantly filling your virtual wallet with dosh. You spend your hard-earned cash on colony or house upgrades and blueprints for crafting. Once the colony has a shopkeeper you can also check out the day’s offers in his shop (restocked with new goods each day). 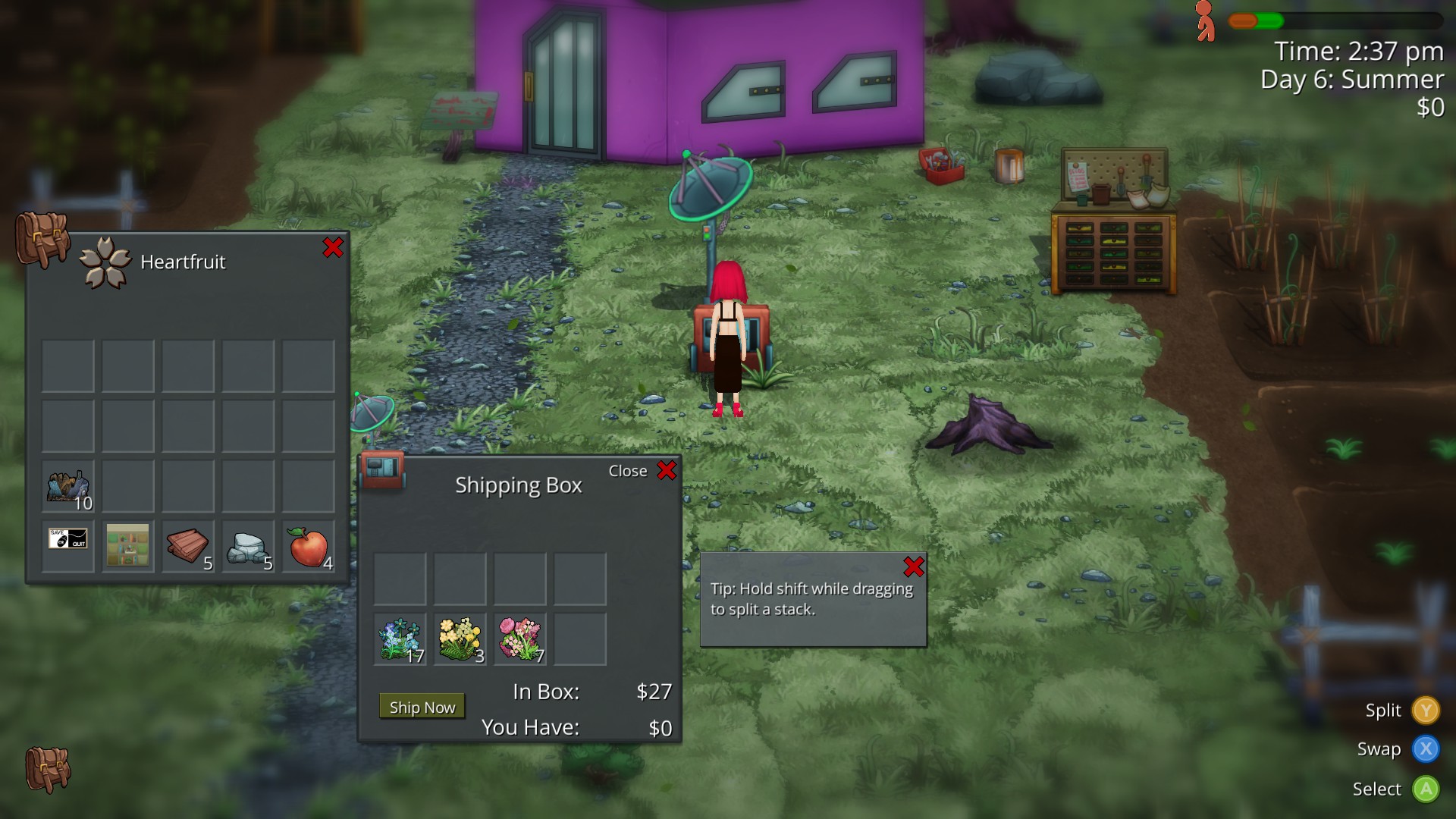 The planet has different biomes, access to some of which requires crafting and using different items. Each has different fish, creatures, insects, and plants to find, and some have uncommon materials as well. One small complaint I have is that the walking speed is quite slow; the game could do with a run option or some sort of craftable item to speed up movement, as travelling to other biomes takes up a fair portion of the day. There may be an item later in the game for this; if so it should probably be brought forward.

Relationships with the other colonists develop gradually, represented by the heart bar at the bottom of dialogue windows. Each day you can gain a little friendship by speaking with each colonist and you can gain more by performing certain once-off collection quests as well. Every time you fill the friendship meter with a colonist you gain a new heart on the heart meter and the next time you see him or her you’ll see a special event: dinner, a walk around the village, a scripted friendly chat, etc. You can eventually develop special relationships, but bear in mind that you can’t please everybody; some of your actions will trade your relationship with one colonist for another. It’s a simple system, but it works well and provides yet another time sink each day, together with some longer-term goals. 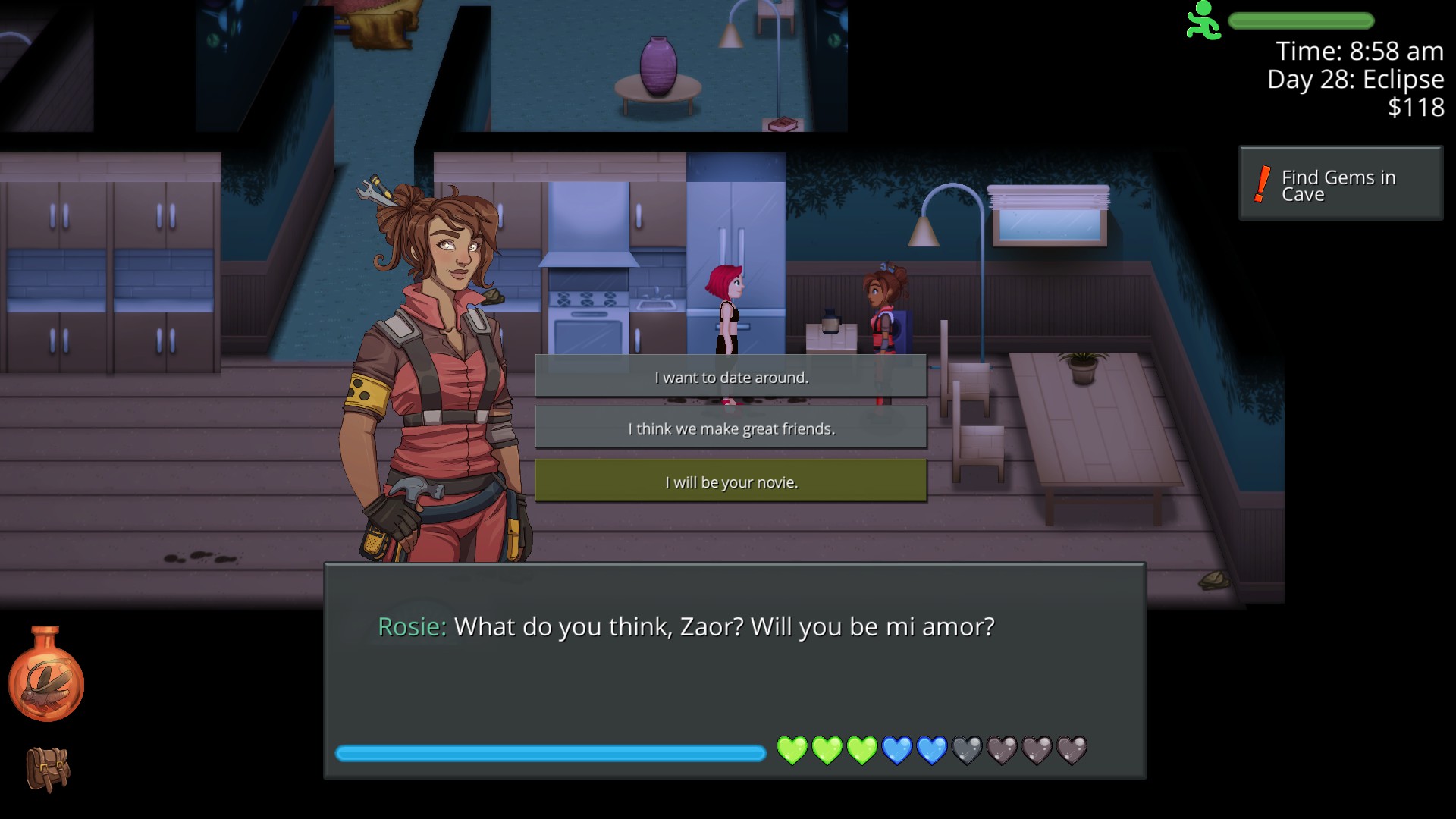 In-game goals are shaped by quests from other colonists: craft this, grow that, unlock this area, and the like. Once you’ve unlocked a few colonists and planted a few fields, though, you’ll end up spending less time actually completing these goals and more time doing your daily tasks. And it’s here that I think Verdant Skies really shines. The game walks a fine line between overburdening the player with chores, thus preventing progress in the game, and giving the player too little to do, thus progressing too quickly through the game’s content. And I think it’s just right. 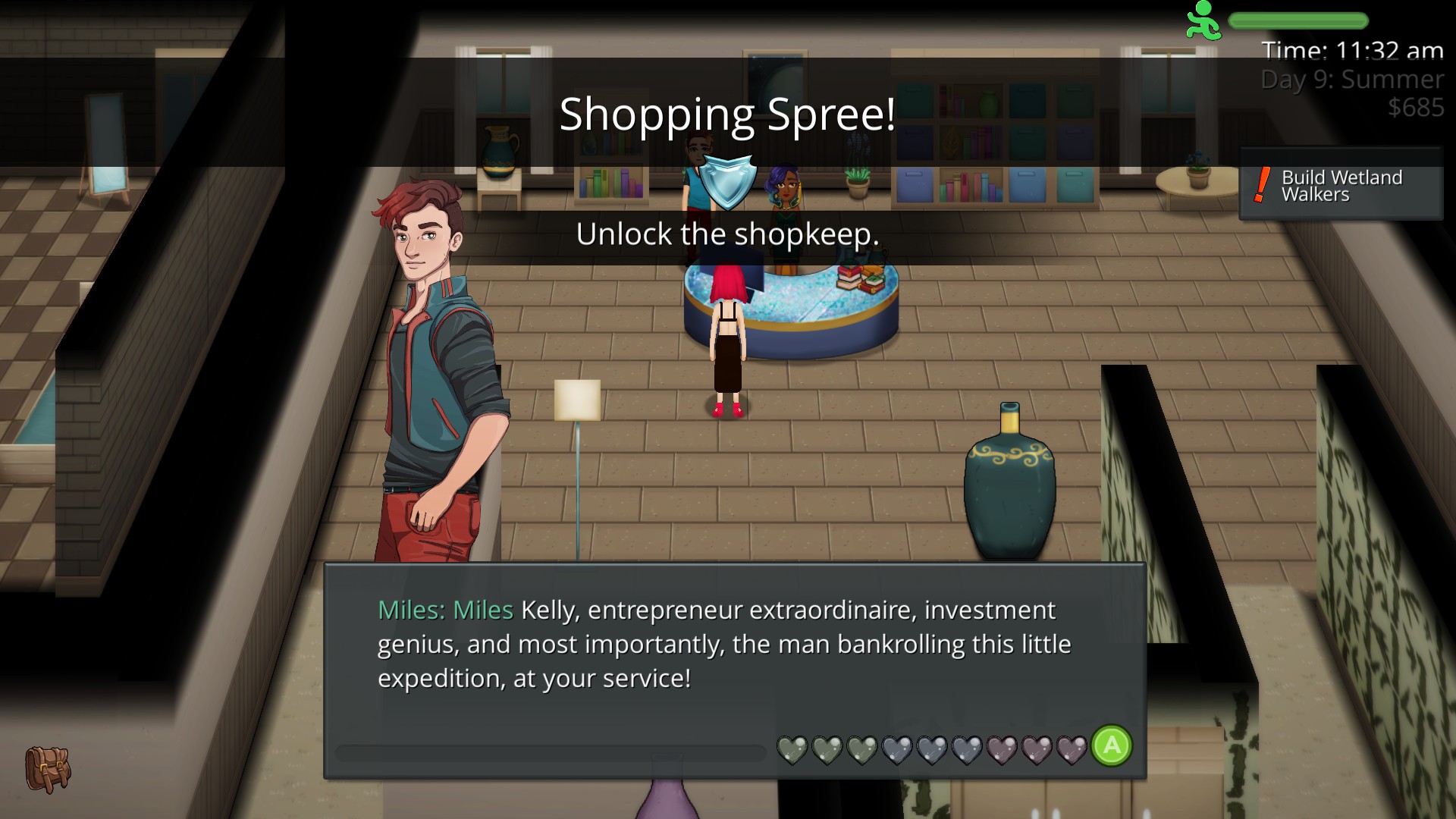 It all starts becoming a bit hectic with half-a-dozen people, harvesting, farming, science ‘stuff’, cooking … but then you realise that you don’t have to do it all at once. The game is very forgiving. Friends won’t hate you if you don’t say “hi” for a few days; fields won’t dry up immediately — rain may even water them for you — and quests don’t have time limits. So take your time, enjoy the gradual development, and relax. 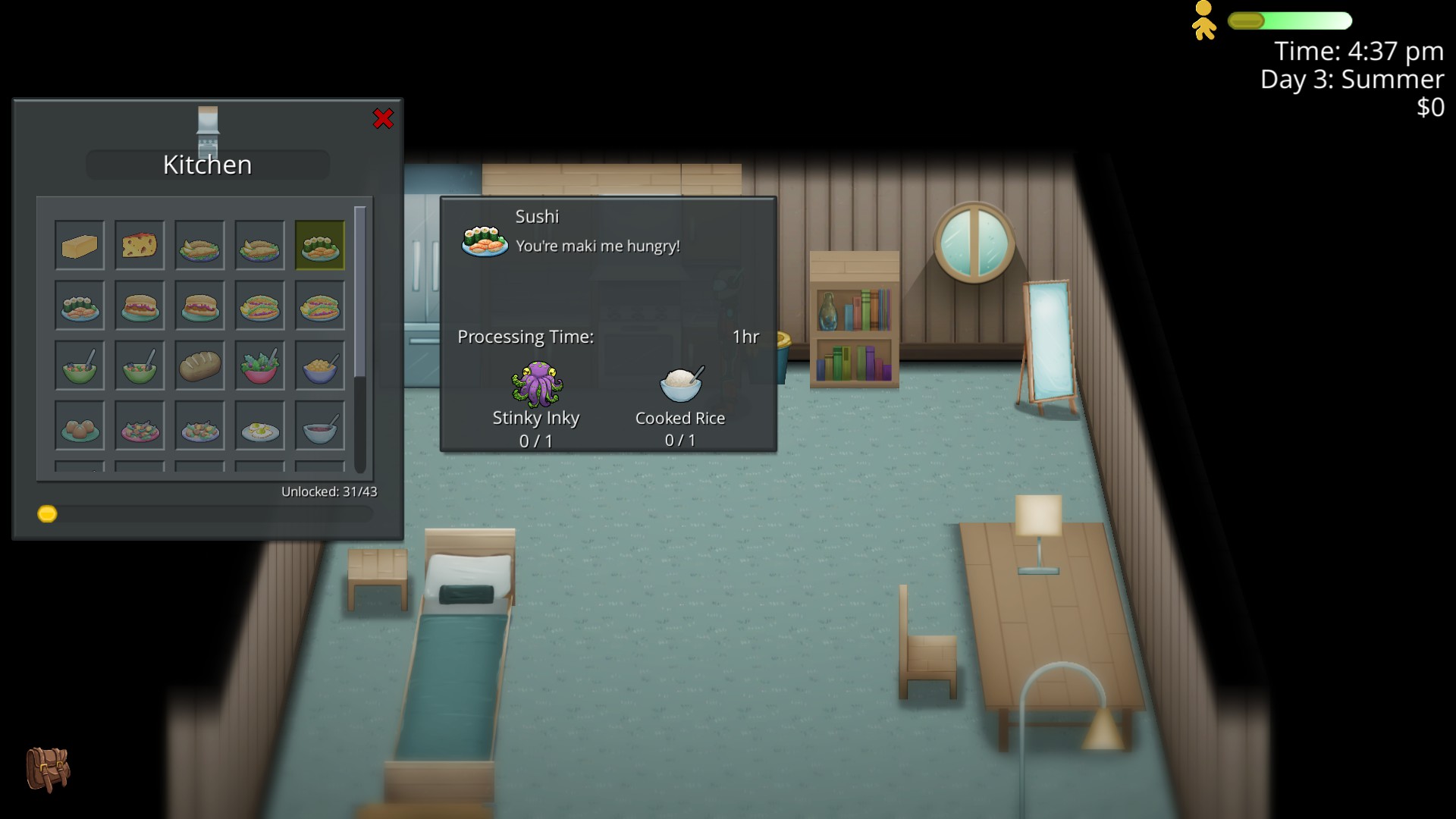 I have found a few issues, though the developers have been very quick to respond. Remaining are some control niggles: pathing when using a mouse is wonky, but using a controller can be a pain in some menus. Sometimes the game will make it difficult to select something small next to something large, which can result in you using the last of your stamina chopping wood when all you wanted to do was pick a flower. There are a few grammatical errors, too, and some confusing parts, such as talking to Jade in the administration building and her telling me, “Please stop by the administration building”. Some players may not like that you have to play a female character, but I don’t mind that. 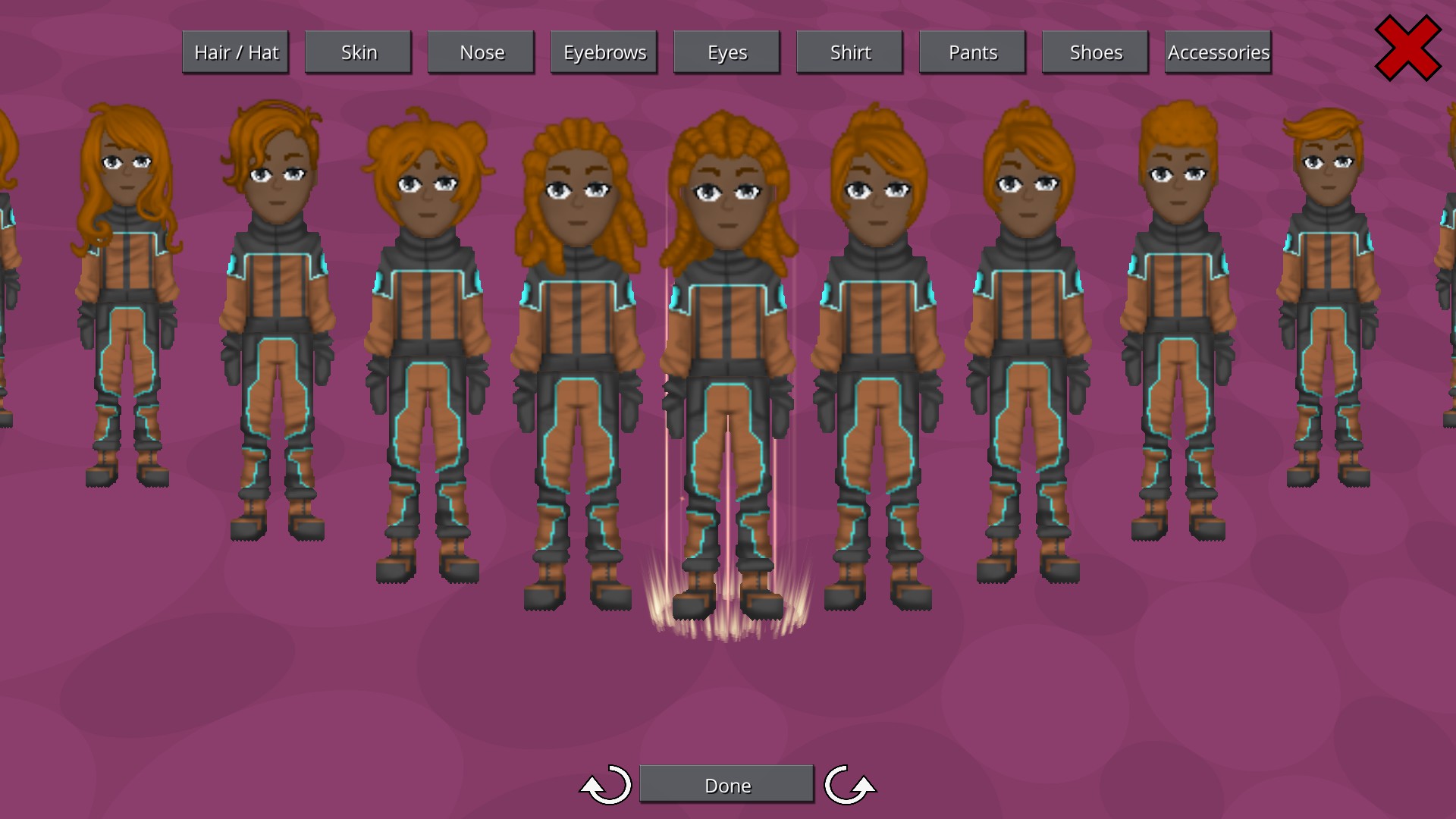 Verdant Skies is an excellent example of its genre; the developers are obviously familiar with similar games and what keeps people playing them. It has that “just one more minute” addiction that keeps you playing well past when you should. Viridis Primus and the colonists are full of personality, making the gradual development of the story something that’s hard to not care about. 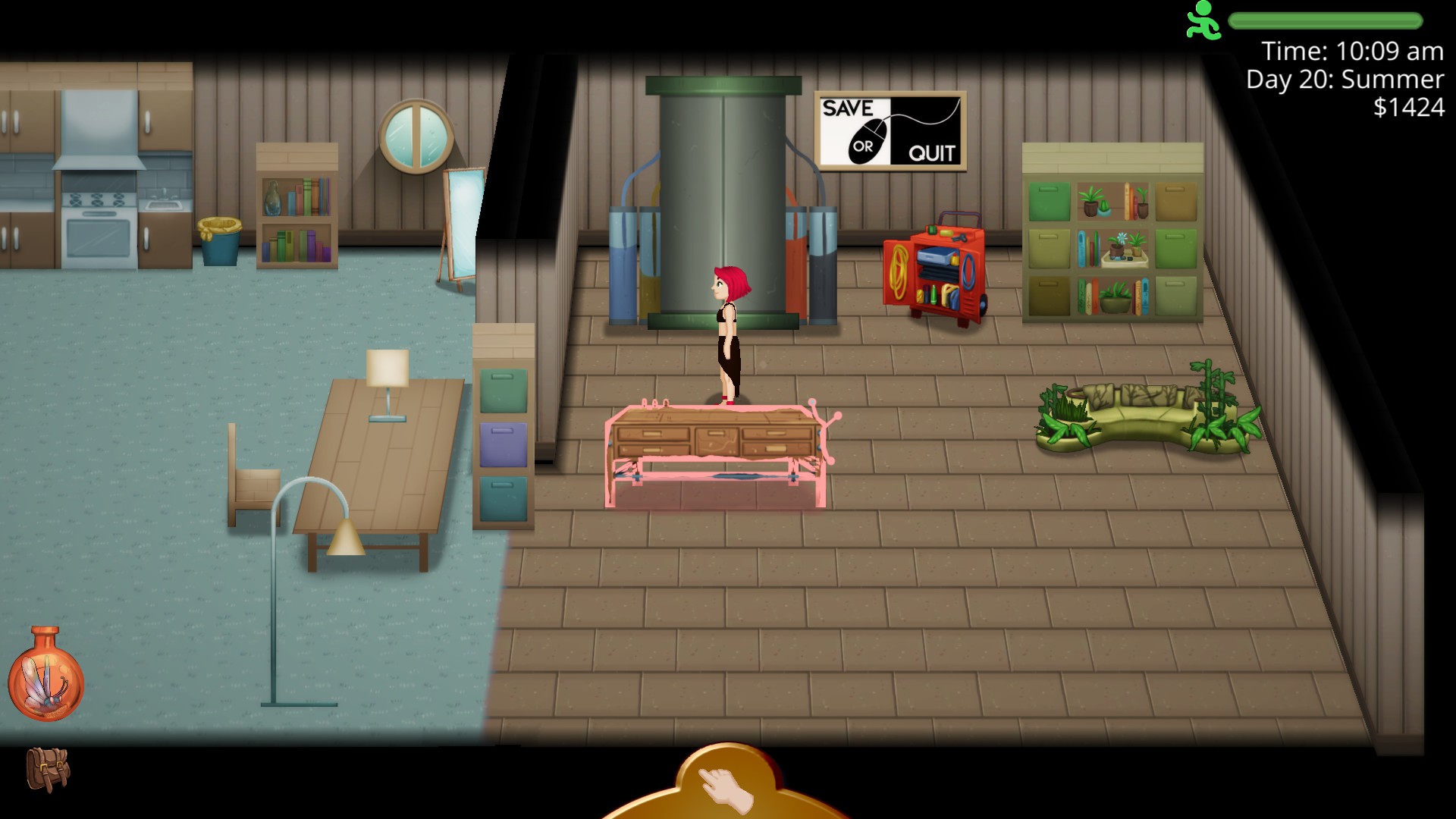