While the Nintendo title Super Smash Bros is the main inspiration for the wave of 4-player games hitting the PC market, most games actually play very differently with ranged attacks and one-hit one-kill. However, there are two games battling for the title of best Super Smash Bros brawler on PC: Rivals of Aether and Brawlhallla. What is special about Super Smash Bros? Characters do not have a health bar to determine when they die, but rather the more they take damage the farther they get projected by a hit. The only way to kill someone? Knock them out of the arena! Not so easy when characters can double jump and have aerial moves.

You are what you fight with

Brawlhalla features a roster of 37 characters and counting. They differentiate from each other in two ways: different stats, and more importantly different weapons. Naked characters have the same range of moves (hitting on each other, *wink wink*), but when it comes to the weapons the differences are vastly different. Each character can pick up two specific weapons on the battlefield, as well as the occasional mine or other props. The weapons range from swords and axes to guns and canons. I will repeat this concept to make sure I conveyed it properly : there is an assortment of weapons in the game, and each character is designed to wield two. Each character is in fact a different combination of weapons, and mastering the weapons is the salt of the game. 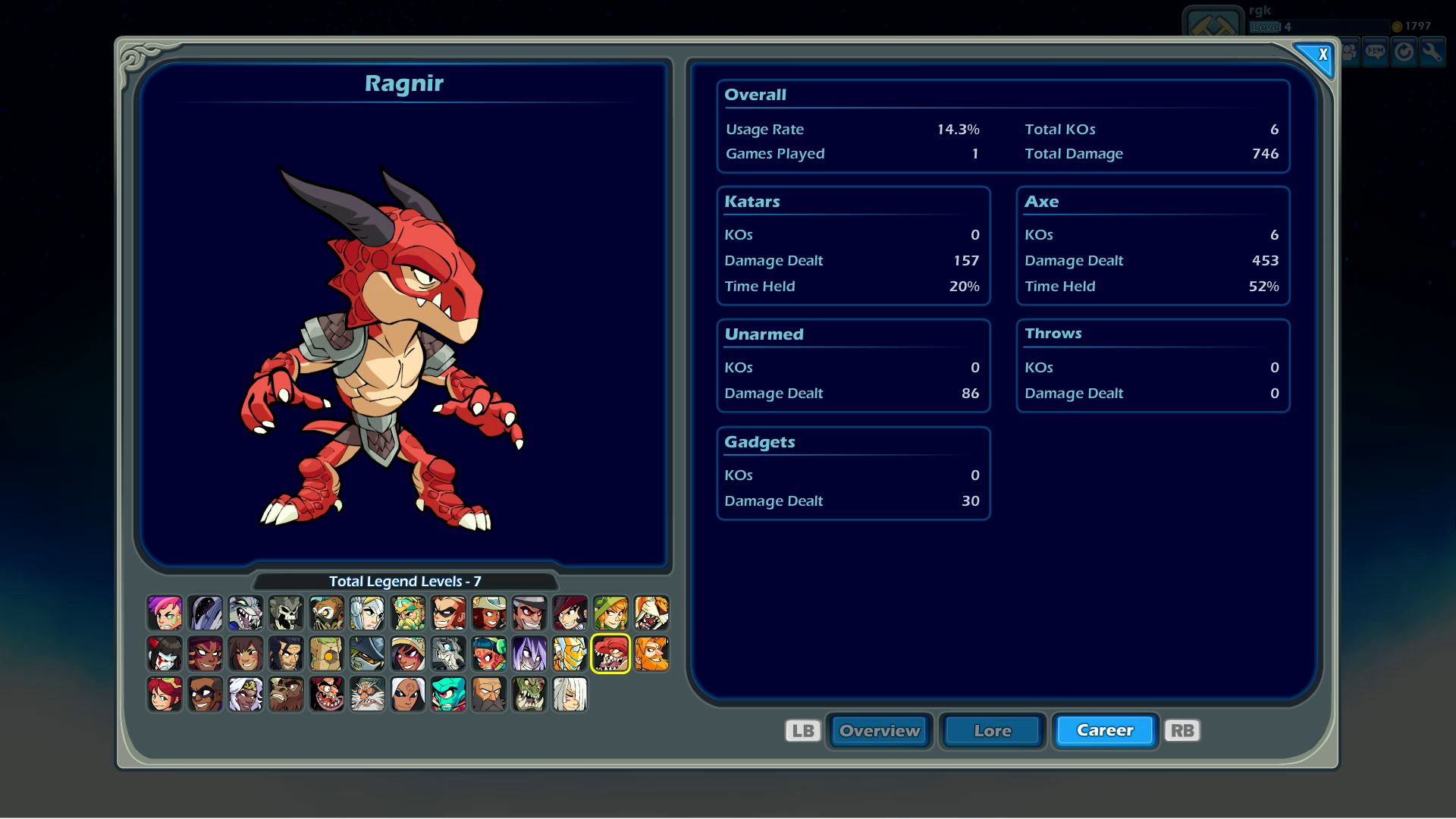 The spice of life

There are many maps which are all well designed with their own quirks and pitfalls. However, I sometimes regret the lack of Super Smash Bros events such as a tree blowing wind, spaceships shooting characters and so on. Rivals of Aether had a bit of this, but the latter had no fun items. Brawlhalla keeps the items to a functional minimum, it’s not as flashy as a crazy hammer or a Pokémon but it’s there, it’s fun, it adds variety to the fights. Something that Rivals of Aether sorely missed. 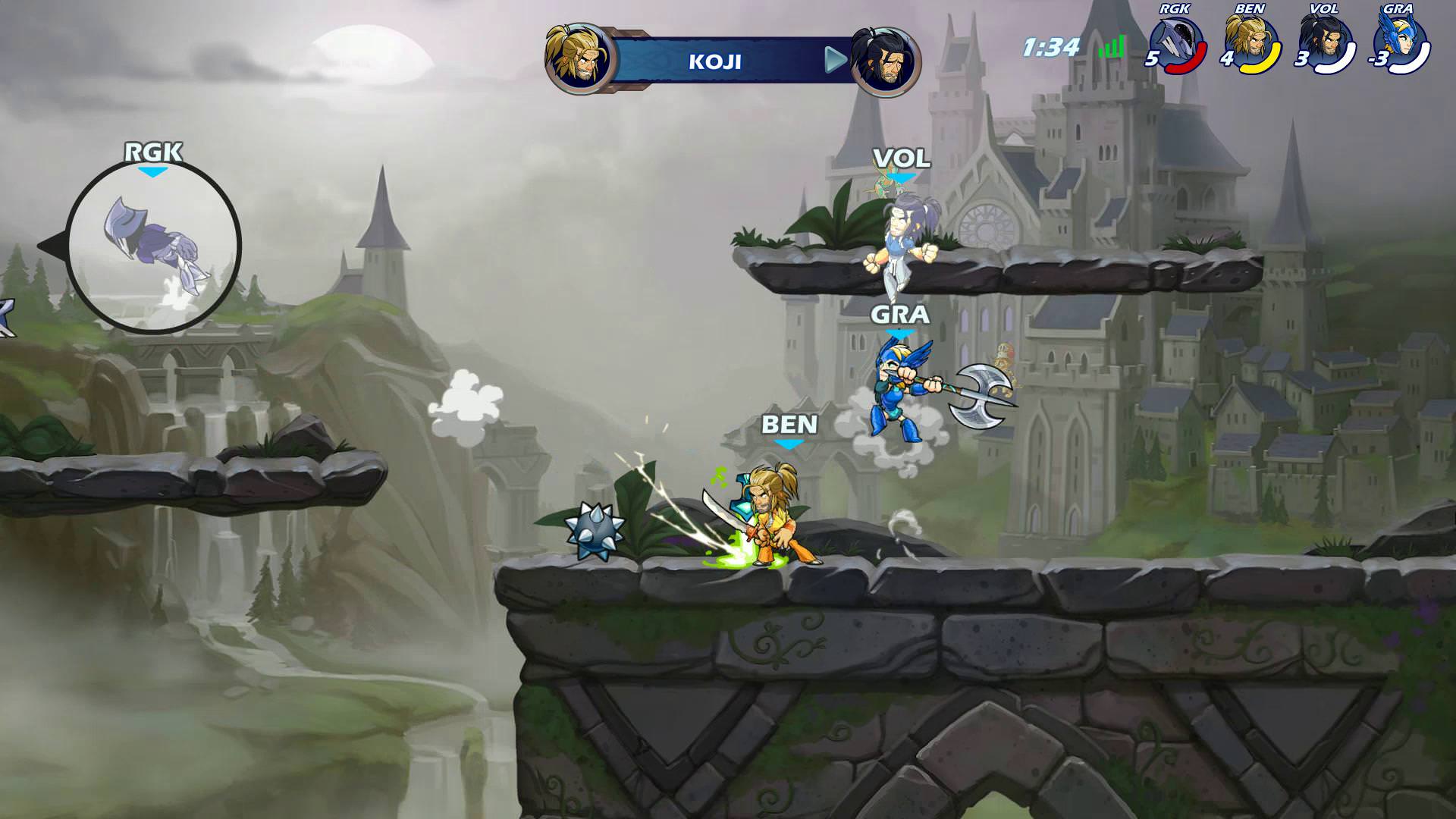 Now please bear with me as I attempt to explain the complexity of the moves available: There are two types of attacks, light and heavy. As you might imagine, light is for faster attacks and heavy is for more devastating hits. However, each of these can combine with other inputs. Heavy attack while standing still and attack while pressing forward or attack while pressing down will each yield a different result, now do that in the air and you have another set of moves. What kind of moves? Your character might jump then perform a diagonal slash. Your character might lunge. Your character might gain altitude while spinning a sword up in the air. And then there are grabs and combos, such as doing a light attack down that will catch someone with the scythe, if followed by a heavy attack up it will throw the opponent far away. Your opponent is trying to get back on the arena? Heavy attack down to divebomb them, hit them and they are out, miss and you are dead. You can see that there is a huge learning curve to master all the weapons, but that’s child’s play if you want to defy those who have learned to combine the shield/dash with different inputs to get aerial cancels and so on. 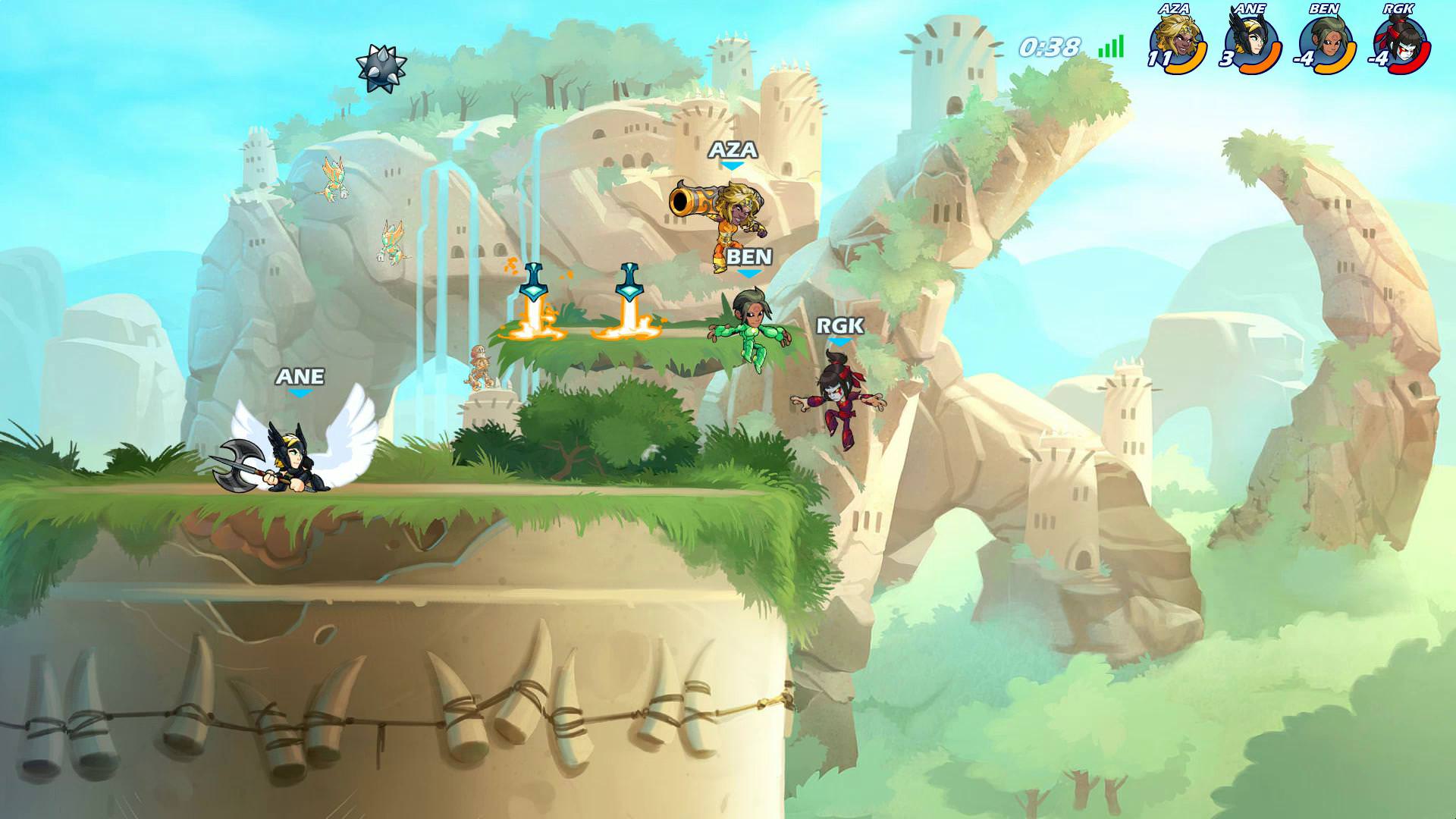 A lot to do, for everyone

Fear not, because the game is actually super accessible to beginners. The vast array of jumps makes it easy to navigate the map, and the chaotic nature of 4-player fights without a health system is a joy to casual gamers. Also, even by pressing all the buttons randomly they eventually pull something cool. The game comes with offline play for local brawling, as well as ranked and unranked play, 4-player FFA, 2 v 2 or 1 v 1 and finally a practice mode to learn the moves. There are always people playing, Brawlhalla seems quite popular already. And, well, it’s a free-to-play. 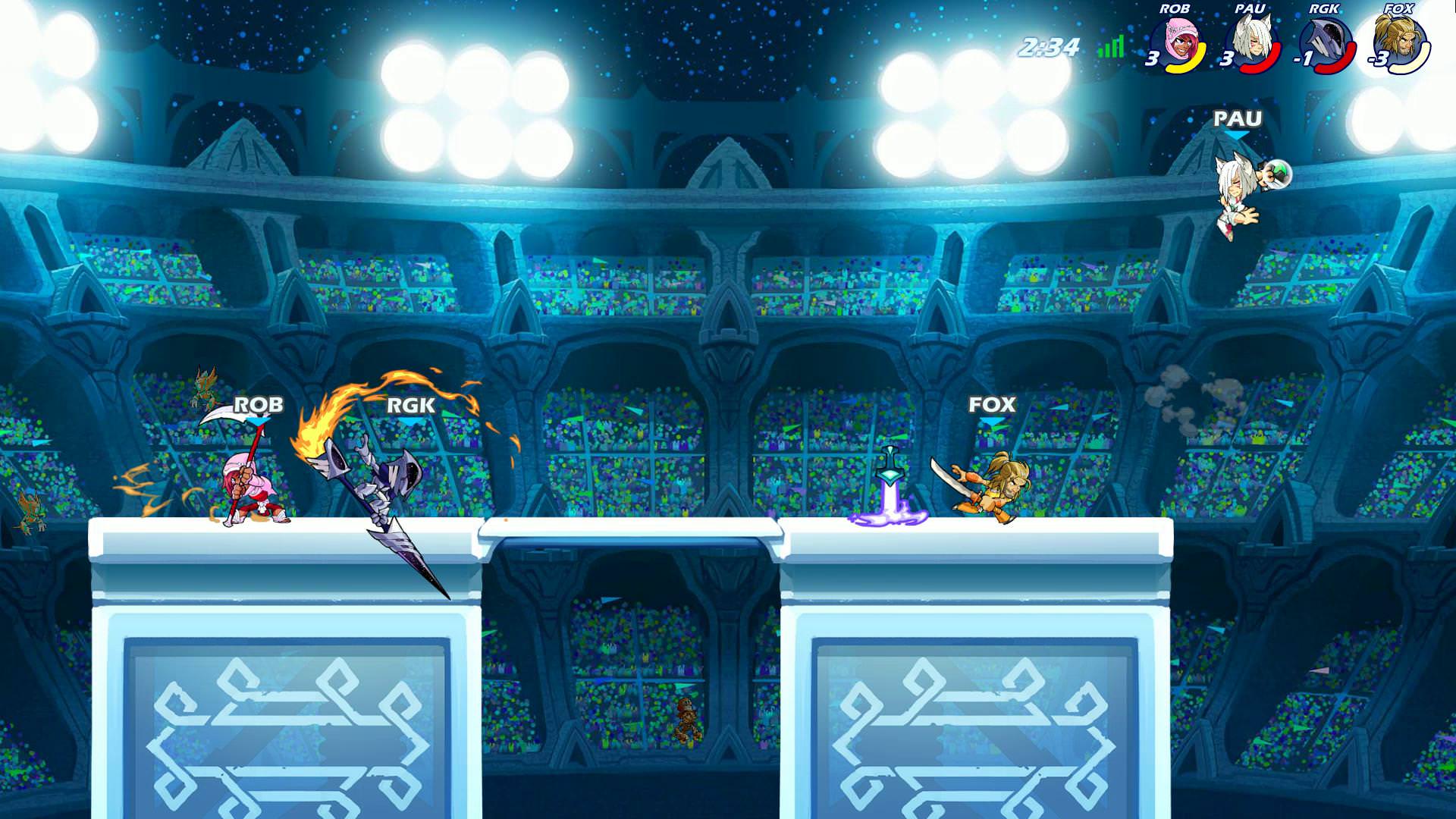 I will start by dispelling the notion that Brawlhalla might be pay-to-win: no. Free-to-play players will only access a few heroes, but they rotate frequently. The price of any other indie game like this one will unlock the whole roster as well as any new hero to come, which is perfectly reasonable. Finally, money can be spent on cosmetics such as skins, while in-game resources can be spent on a few more cosmetics – or to buy heroes, in case you have a favorite who is not in the rotation. I am perfectly fine with this free-to-play economy, it’s clean, it does not affect enjoyment of the game in the slightest – I am happy to see that despite the current trend to milk players through chests and loot boxes to gain power. 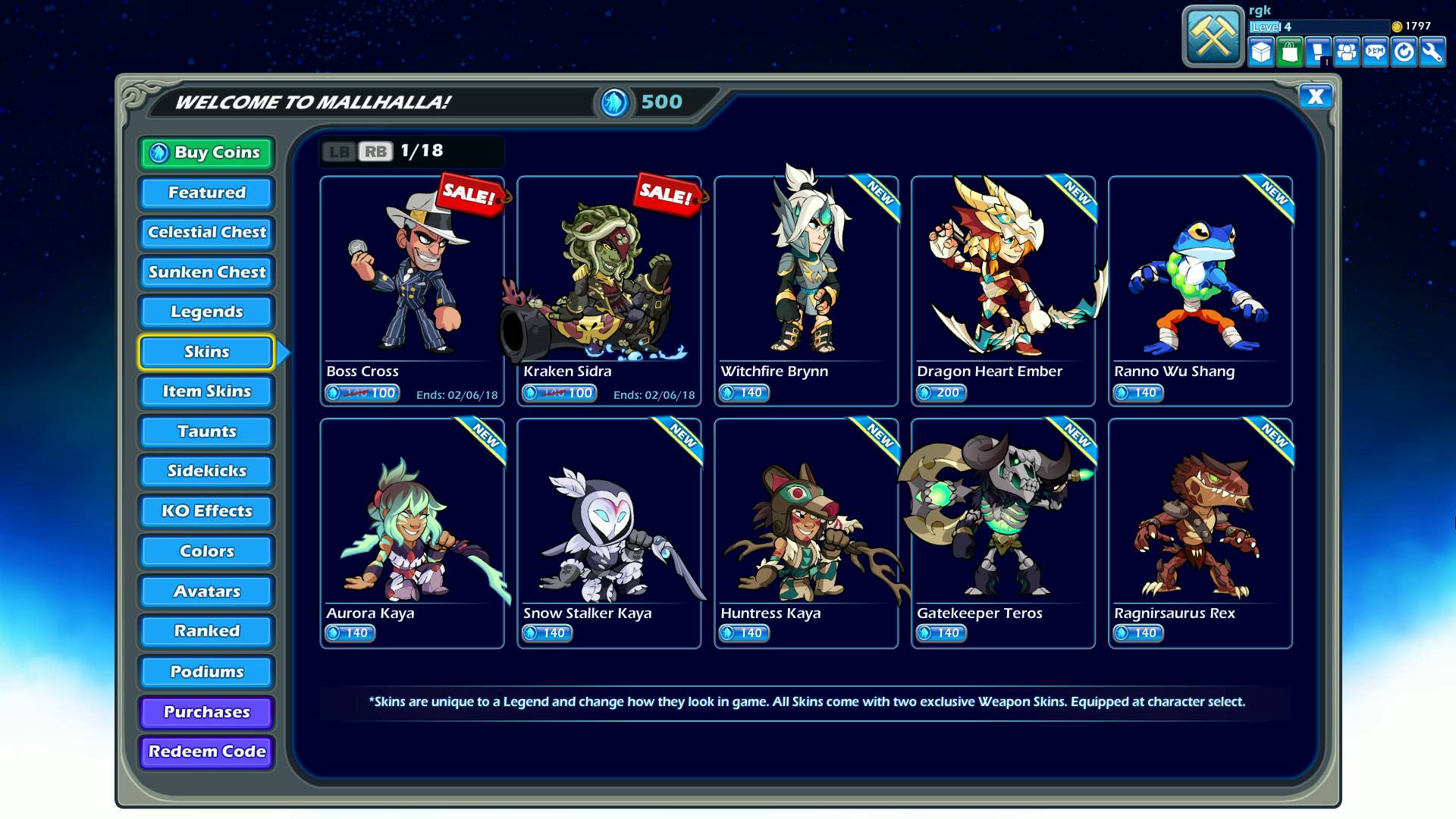 Notwithstanding that the game keeps its head high with in the free-to-play department, everything else is absolutely polished. Rebinding keys is entirely possible, the netcode is good – I found nothing to complain about. Great job. Another thing that I liked is that at the end of the match, besides the chat, there is a button to say ‘GG’. Only that, no button to directly berate people and promote toxicity. Good. Overall the art is from ok to good. I am not a fan of the faces of the heroes, but in movement this did not bother me at all. The game is very responsive to player inputs, it feels great to control the characters. 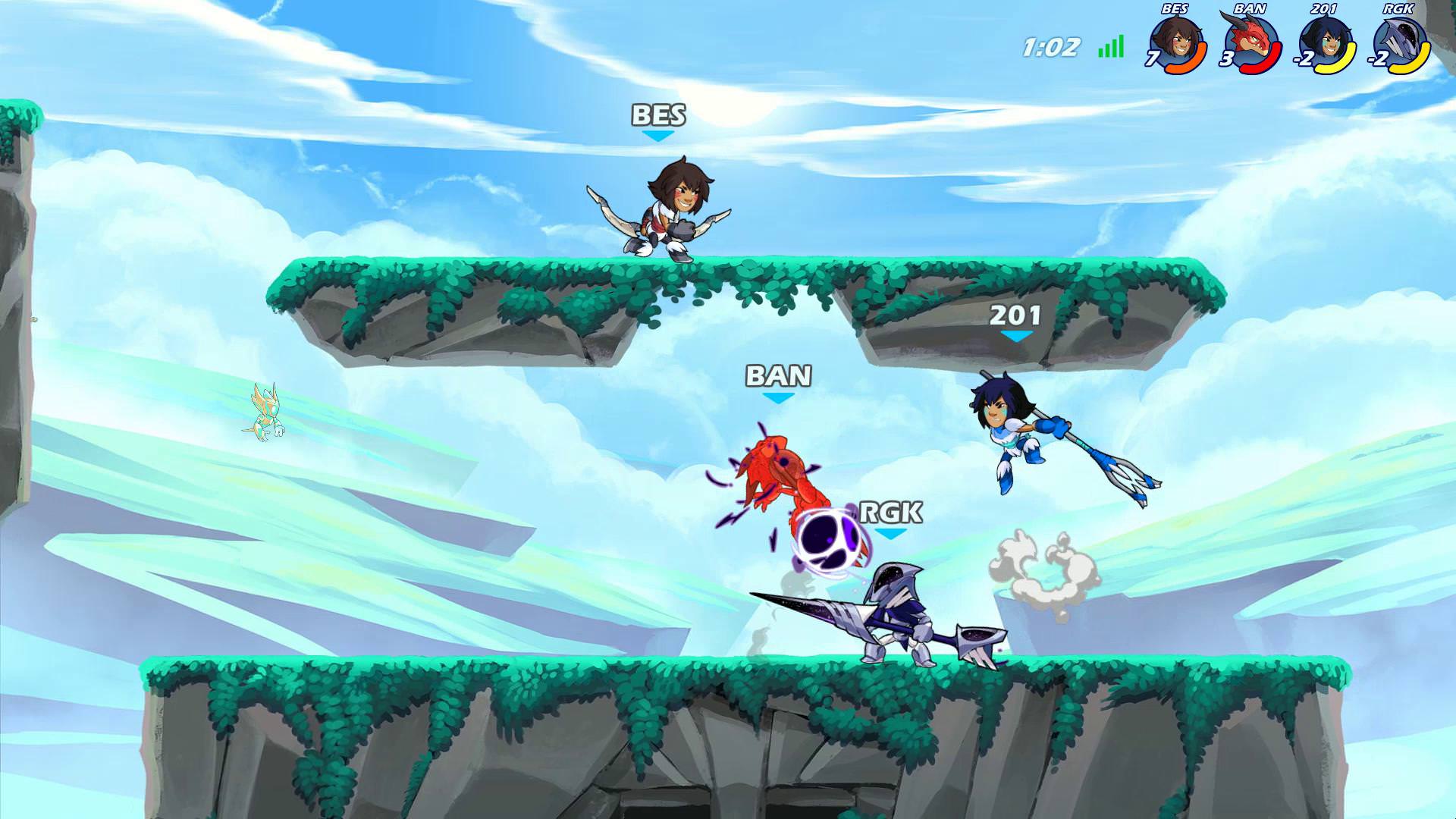 Brawlhalla is accessible and fun for local 4-player parties or online with friends. It’s free, it’s super polished, you have no reason to hold off – except if someone in the group plays it alone a lot and starts to get too strong. Then there are unranked games to enjoy a brawl with strangers, as well as a ranked mode for experts to display their mastery of the complex techniques in the game. I can’t find any fault in this game; my small regret might be the lack of spectacular events in the maps but I understand that random or unfair elements have been stripped of the game.