7 Days to Die is a survival-crafting masterpiece. So what if it’s still in EA? Buy it anyway!

7 Days to Die is a survival-crafting game from indie developers and publishers, The Fun Pimps, currently in Early Access on Steam.

In 7 Days to Die you play one of few survivors in a post-apocalyptic wasteland. The decaying remnants of society are scattered about you, inhabited now by endless hordes of wandering zombies. You start the game on a bright, sunny morning in the desert in Arizona (or potentially another biome somewhere else, if you’re playing a generated world) wearing your stylish underwear and carrying only a few odds and ends. It’s up to you to find your way to shelter — or make it — and survive as long as you can in a hostile world.

The graphics in 7 Days to Die are mostly excellent, with a range of great zombie models with good texturing and animations; believable lighting effects that differ convincingly between flame, electric lights, and ambient lighting; and a desolate world that really draws the player in. 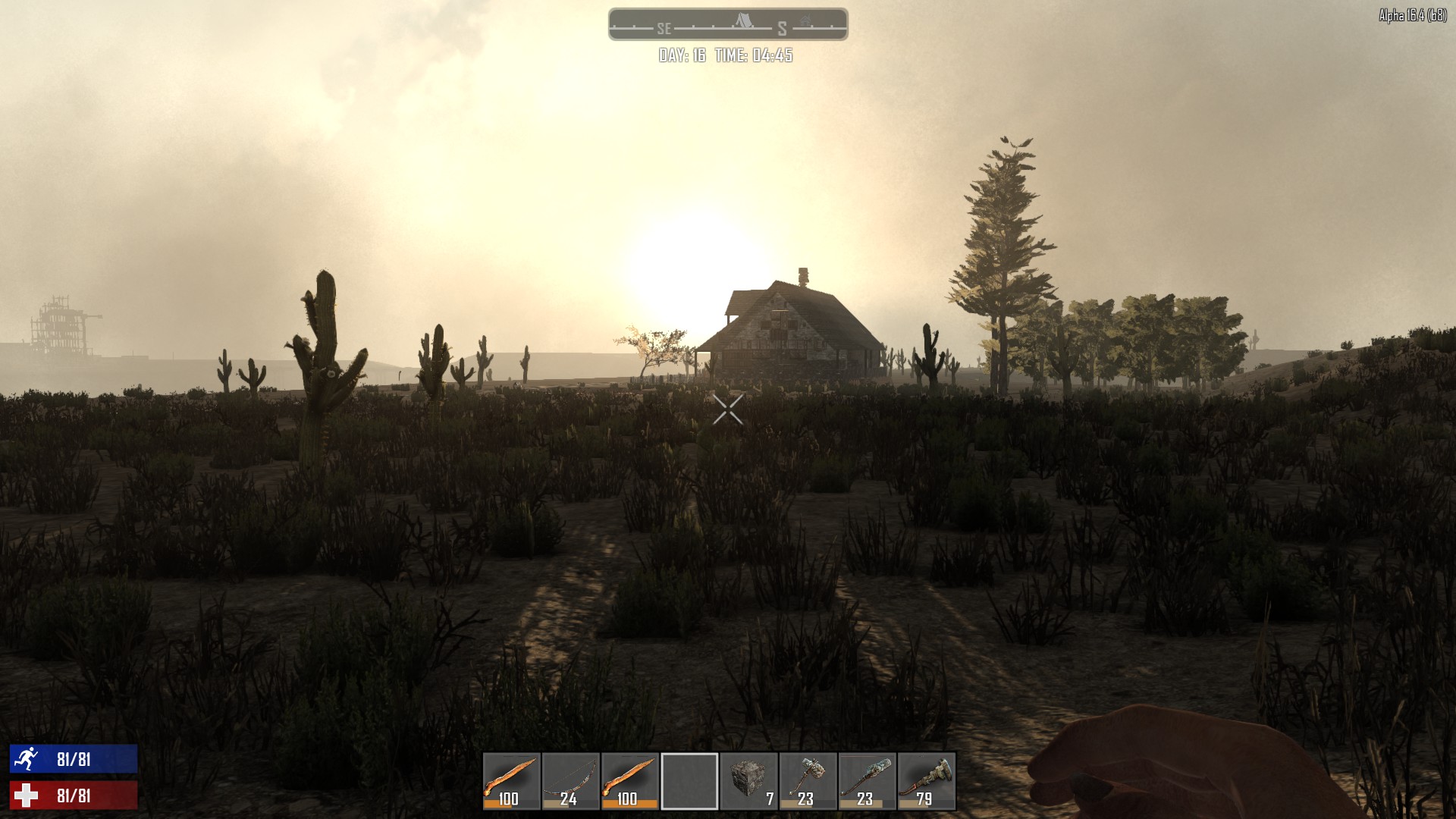 Some of the graphics, though, are considerably less impressive up close, with much of the ground foliage being obviously made of a couple of flat planes with textures applied, stuck in the ground as if on a wooden cross; many of the building block textures being just a little too repetitive and plain; and a number of little graphical glitches, such as water containing weird sharp-edged shapes, occasionally disappearing textures, and some weird shadow effects visible on occasion. 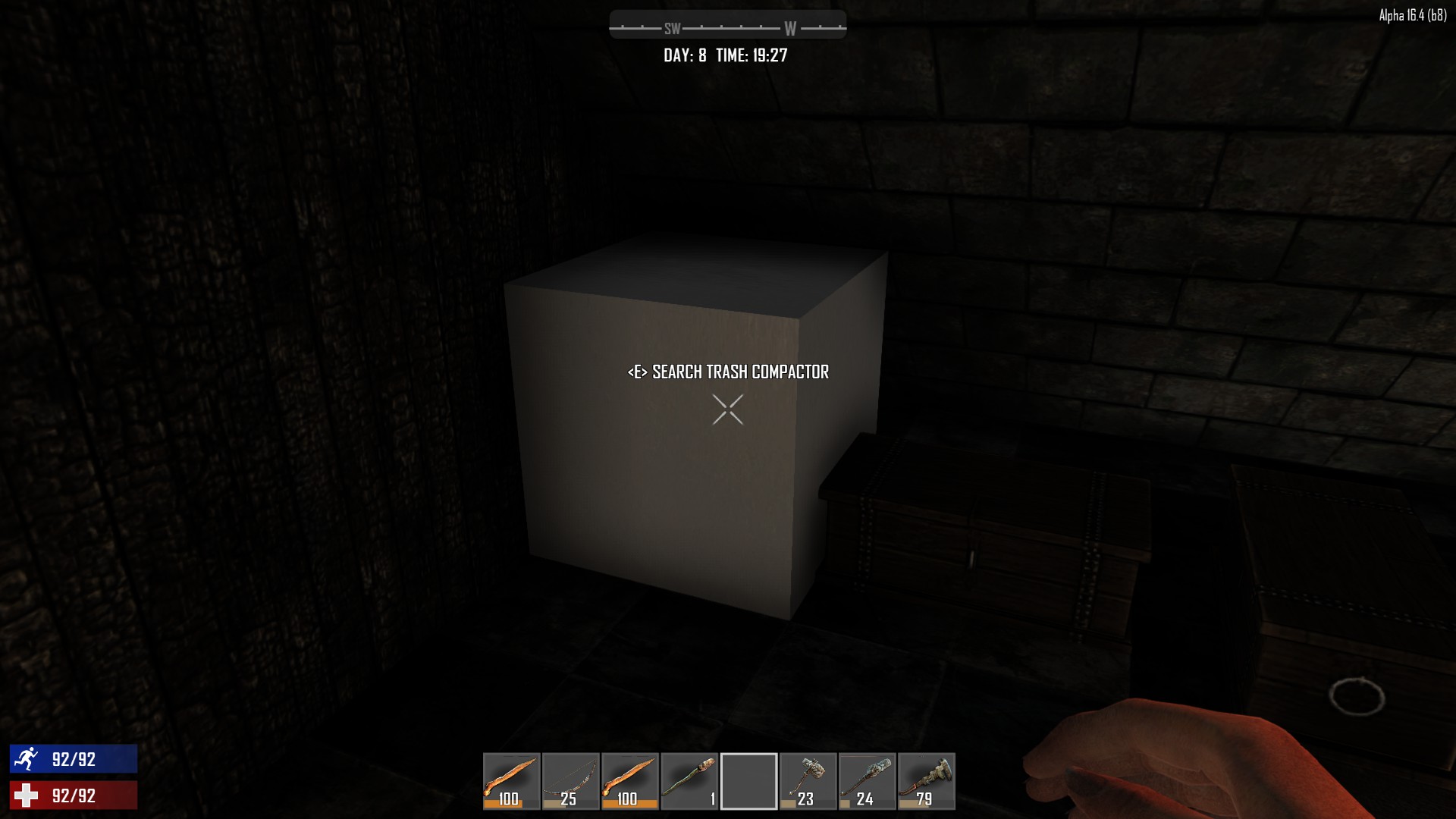 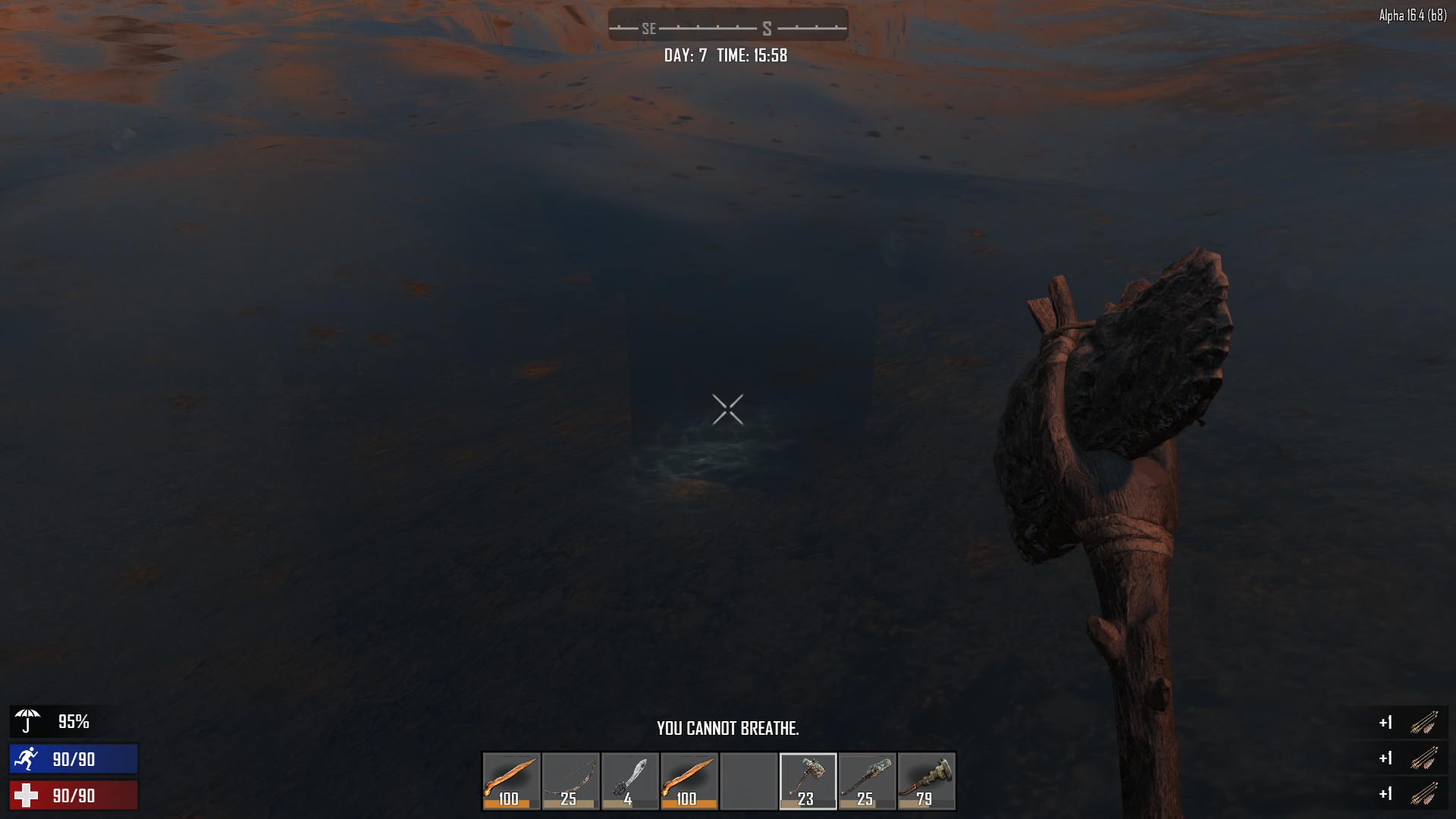 The user interface is consistent and reasonably good looking, too, though it can be a bit confusing and fiddly. Even after hours of play I often find myself pressing LMB to place something in the world rather than RMB, and dragging items in the inventory sometimes requires a brief pause to pick something up, which took me a while to get used to. It’s also much too easy to irretrievably destroy something important through accidentally dropping or throwing it.

Music is extremely limited, but not lacking, if that makes any sense. There’s a minimalist title theme, which suits the game perfectly: lonely, mournful instruments that evoke a feeling of drama and loss. Other than that there are a few chords here and there, keyed off dramatic events occur as you play, but nothing else that I’d actually call a music track.

Sound effects are mostly really good. There are the usual tool crafting sounds — axes, hammers, and whatnot — as well as typical FPS sounds of exertion from running, jumping, and becoming tired. Zombie sounds are varied, and after a few encounters one learns to recognise zombie types by sound. Weapons sound convincing; I haven’t yet managed to build any vehicles so I can’t comment on them, but the occasional plane flying overhead sounds good. There are no voiceovers.

Graphics settings are numerous enough to customise performance vs quality to a range of PCs. I haven’t encountered any persistent performance issues, though the game does stutter for a second or so when loading in new areas or spawning zombies and I found inventory performance was terrible when facing a river while also crafting a stack of short-timeframe materials. 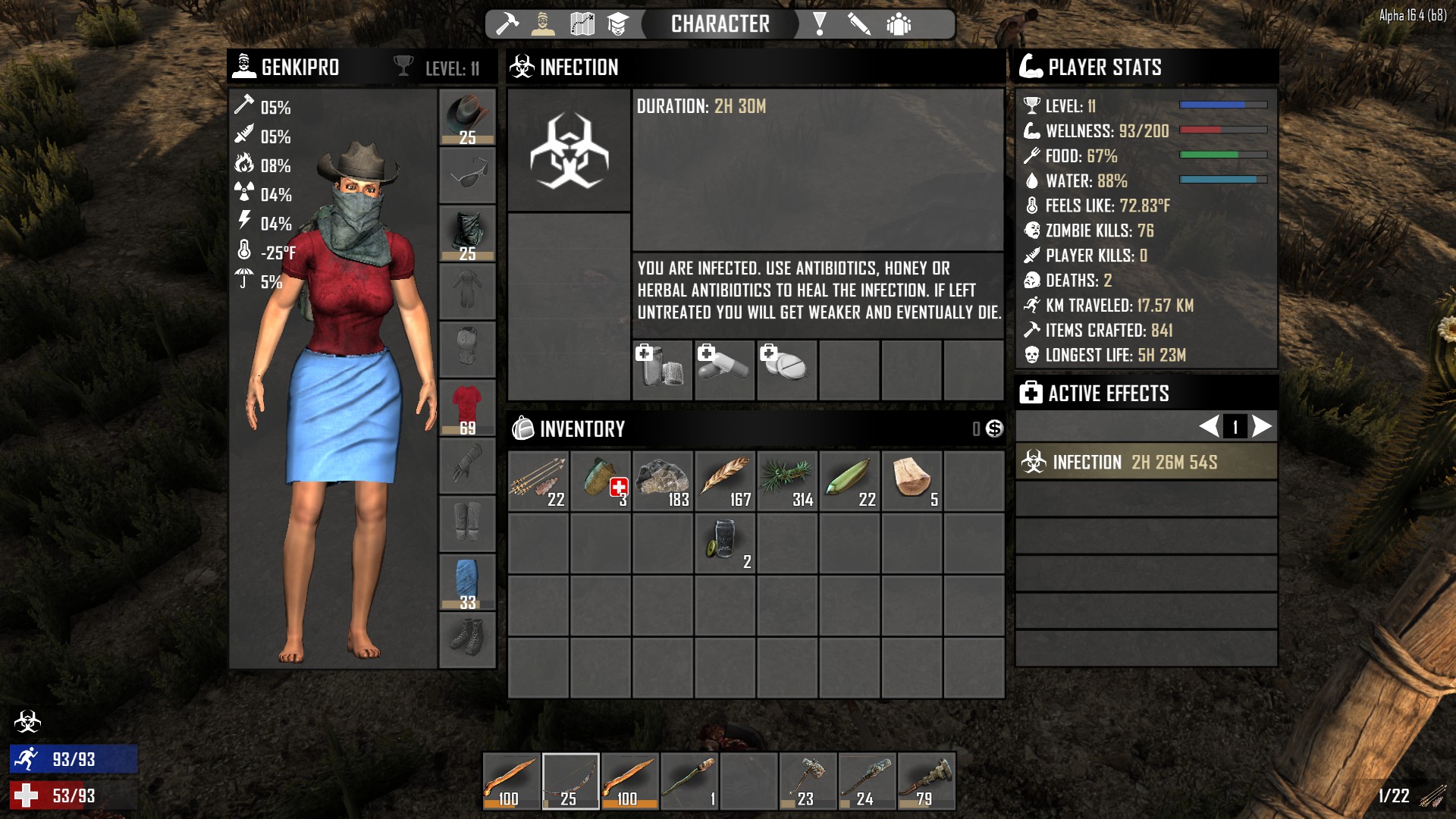 The game gives you a brief tutorial, presented in the form of UI messages ostensibly received from a surviving human settlement, which should keep you busy for the first few hours of the first day, and see you kitted out with a club, a bow, an axe, and a few more goodies, all of your own making. Then it’s up to you to find or build somewhere to live. Don’t take too long, though, as come 22:00 it’ll be getting very dark, and as we all know zombies like the dark … . There’s a reason the game is called 7 Days to Die, too, and it’s a scary one. Survive until 10pm on Day 7 and you’ll be rewarded with a rampaging, slavering horde of zombies who, under the influence of the weekly Blood Moon, are able to find you unerringly, wherever you may be hiding. Build up those defenses; you’re going to need them! 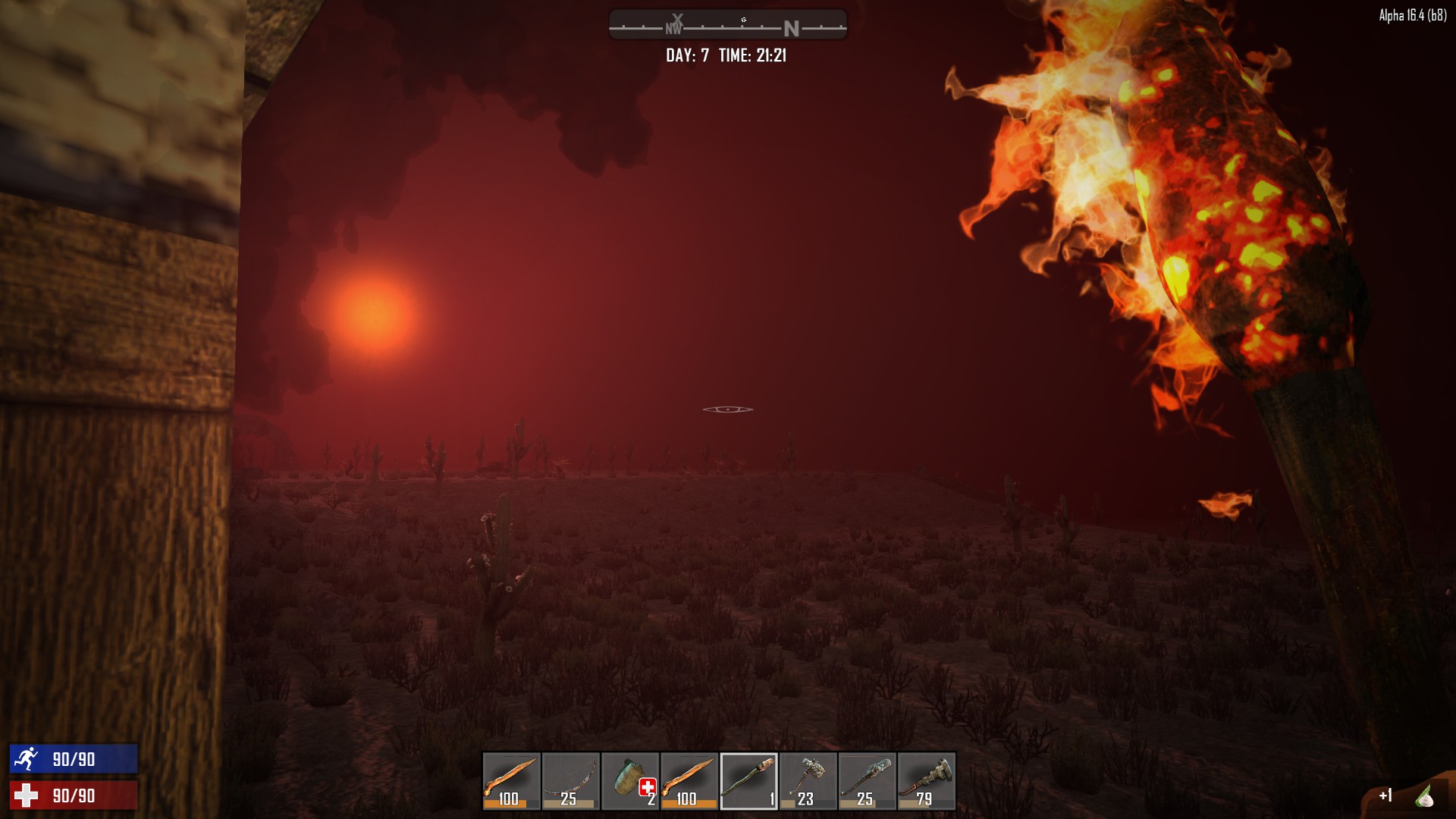 7 Days to Die is played from the familiar first-person view, and it takes much of its action from the FPS genre. I wouldn’t call it a FPS, though; while there is indeed a lot of combat, to me the game is much more about building an intelligent defense from the scraps you find or can harvest than it is about shooting. 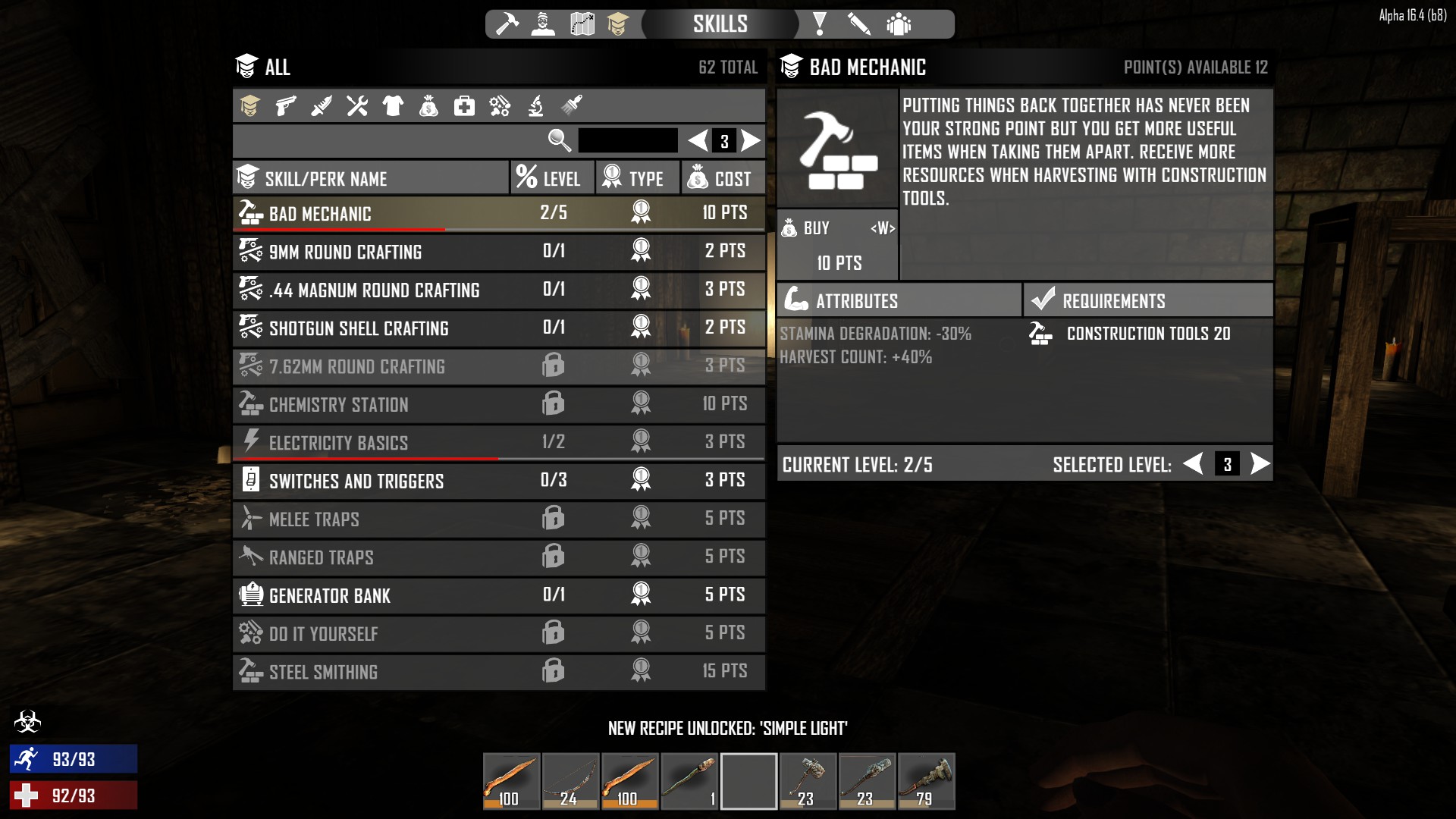 Typical play is cyclic, with your long days spent farming, mining, exploring, and scavenging, and your very dark nights — when the zombies are most active and aggressive — spent huddled next to a dim candle, recovering from the day’s activities, crafting items, and, planning your next day’s activities. Each week is cyclic, too, with the first six days and nights as described, but the seventh night spent praying your preparations were enough — and defending your ramshackle base if they fail. 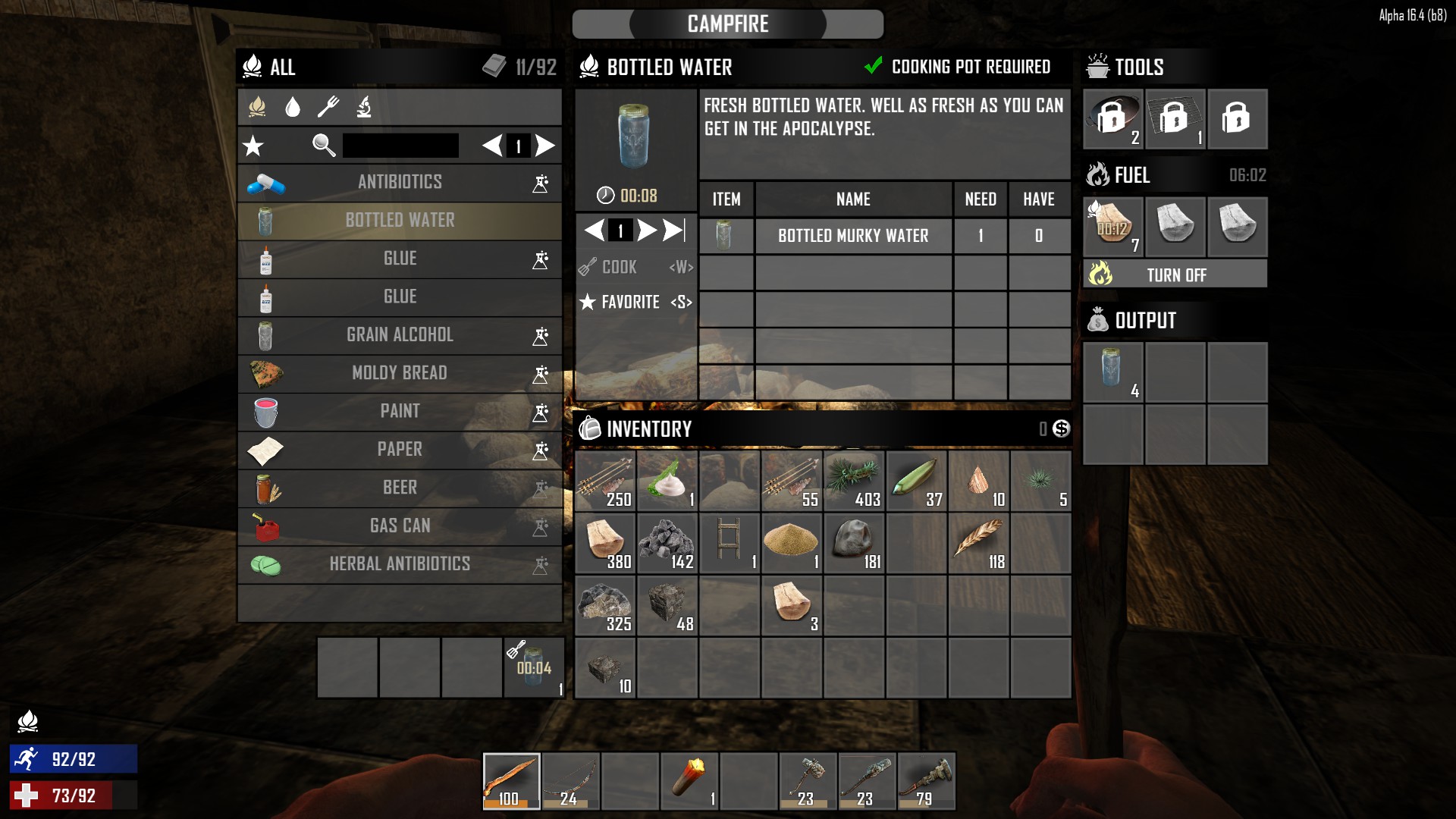 The pre-built world of Navezgane County, Arizona, is huge and it provides a lot to explore and do. I’ve been playing for about 20 hours so far and have built and reinforced a tiny base near my starting point, but have only explored a tiny portion of the map. Navigation is easy with the UI compass (there’s no need to make your own, which would have been a cool addition to the game) and the map provides some pre-defined waypoints for things like traders or your bedroll (spawn point for when you die), as well as allowing you to specify your own.

You’ll encounter a number of different types of zombies as you play, and as well as the Blood Moon horde every seven days you’ll also come across roaming hordes randomly during the day. These can kill you just as dead, so be careful! The game is mostly fair, though; I’ve died twice so far — strangely the game says three times — and both times have been to my own stupidity. 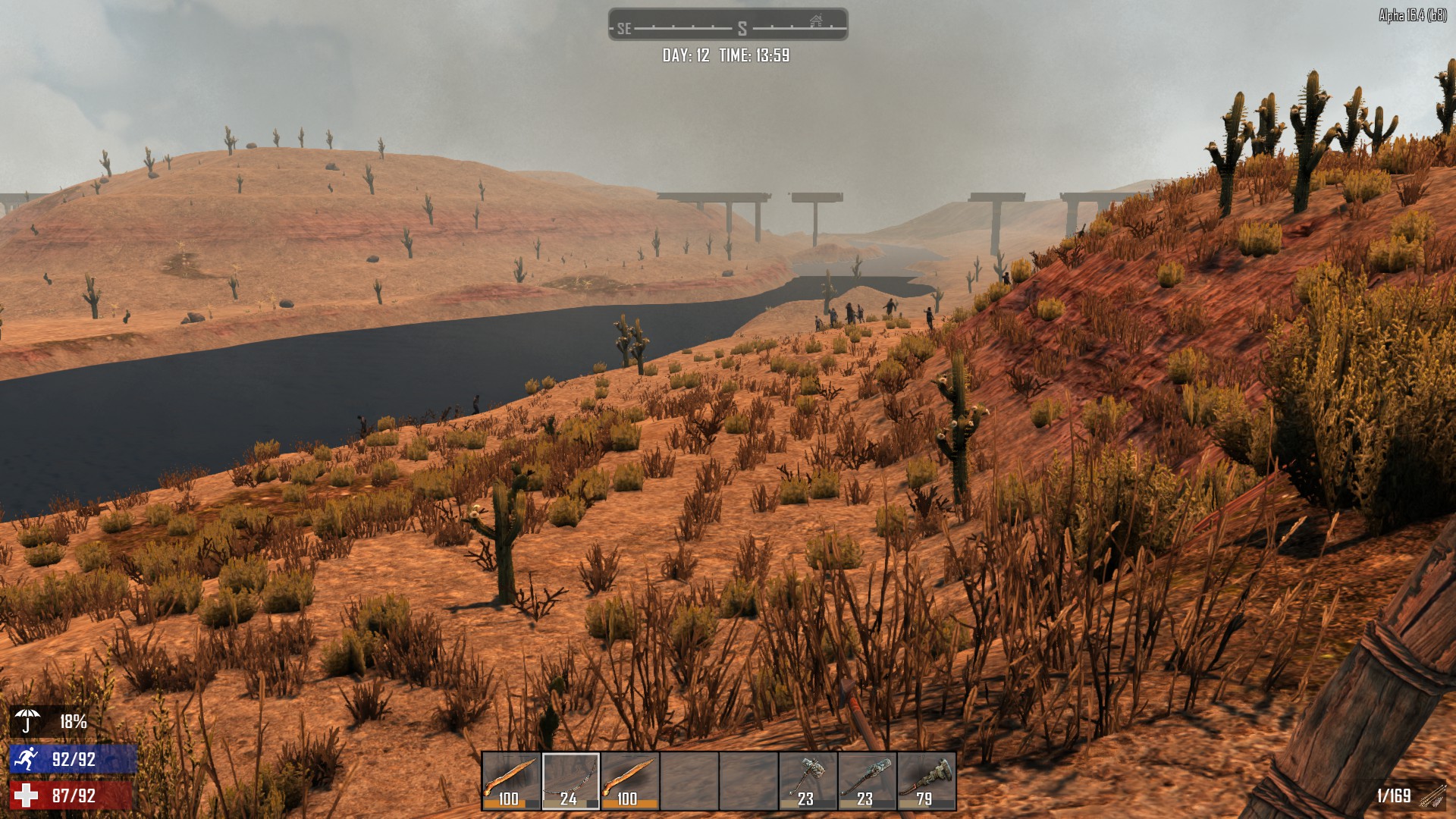 The best part of the game in my opinion is the immersion. Nights are so dark that it can be really frightening huddled there in a corner with only a candle for light — larger light sources are more likely to attract zombies — while strange night noises surround you and you hope the shuffling zombie you can hear doesn’t decide to investigate the door you didn’t quite manage to repair. And while the scavenging, mining, crafting, etc, get very repetitive, they’re very well done, and with so much to create! This is all helped by the renewed sense of purpose that each week brings.

As the game is still in EA, there are a number of bugs and other issues, the worst of which break this wonderful immersion. The worst is probably zombies who spawn inside sealed buildings, especially while you’re in them. They also seem to know the weakest points in your defences, even if it all looks the same from outside. I’m not convinced about the attraction to light sources, either; placing torches in a completely light-sealed room seems to magically cause more zombie interest in your base. There are also the graphics issues I mentioned earlier. 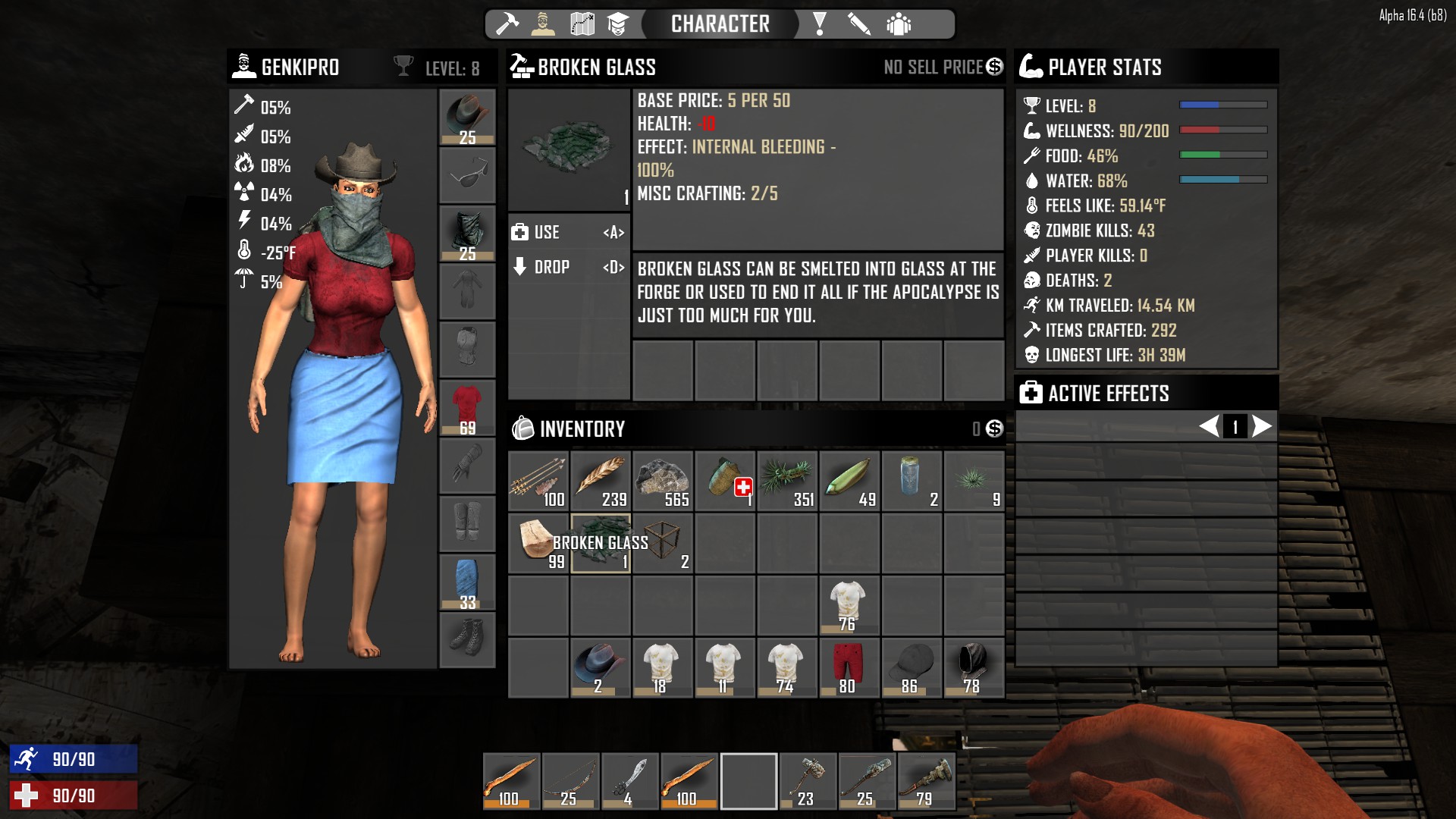 7 Days to Die has been in Early Access on Steam for just over four years, but don’t let that put you off; the still-very-active developers are simply using EA as a means to produce an excellent game with community involvement, exactly as it should be used.

If you enjoy survival-crafting games, can put up with some bugs as new game systems are introduced and refined, and don’t mind killing a zombie or two (hundred), then you really shouldn’t miss 7 Days to Die. It is an amazing game, EA or not.