REVIEW: A Hat in Time

Hats off to this 3D platformer, which is one or two steps away from being a classic.

2017 has been quite a year for gaming, and I had the privilege of playing through most big releases that came to PC. Prey, Nier Automata, Cuphead, were all great. But there was one big release that disappointed me: Yooka Laylee. It wasn’t a bad game by any means but as a successor to Banjo Kazooie it was a let-down given the talent behind it. The expected greatness did eventually come, but from another game entirely: A Hat in Time, which finally came out in October after four years in development.

You play as Hat Kid, a space-faring child on her way home from some expedition the game doesn’t elaborate too much on. While waking up one day however, she’s confronted by a member of the mafia from the planet below, demanding a toll. This ends up causing her whole batch of Time Pieces powering the ship to end up falling there. You’ll need to get them back to get her home, and the game does a lot to make you want to. Despite being a fairly simple character with no direct dialogue, Hat Kid still manages to be very endearing. 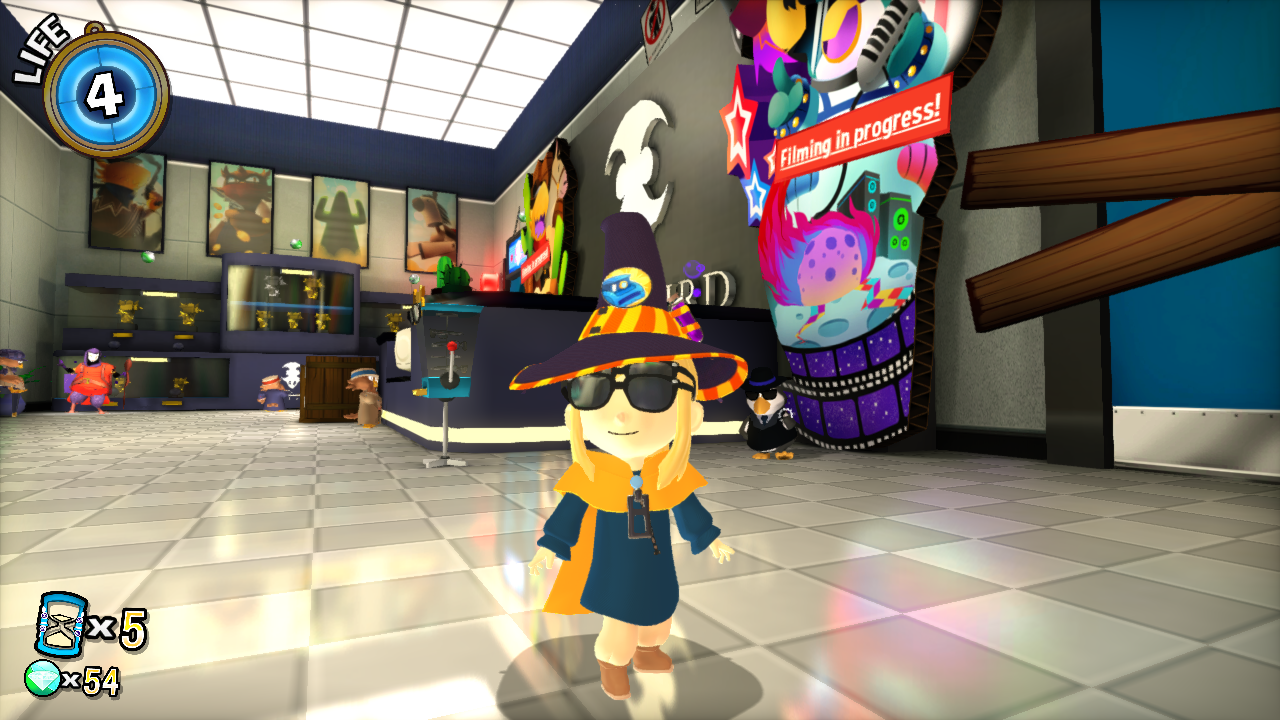 A Hat in Time clearly borrows influence from Mario 64 and Sunshine primarily (ironic, given Mario Odyssey went the Banjo Kazooie route recently), with most worlds being divided into different acts with clearly defined goals, although there is one that lets you free roam. The first world, Mafia Town, owes a lot to Sunshine thematically it seems, being a tropical town on the sea. It’s a strong start to the game’s visuals, which are colorful and varied even if not the most advanced, and its good sense of humor, as all the Mafia members (who are all named Mafia and speak in the third person) have something funny to say.

Mafia Town is probably the most ‘normal’ level. The second, Battle of the Birds, is set on a movie lot with you playing as the lead in two movies by rival directors; a western by the perfectionist and grouchy Conductor, and a musical by the laid-back DJ Grooves. Subcon Forest has you continually roped into contracts by a comically evil spirit known as The Snatcher, and forced to do his dirty work. The fourth, Alpine Climb, has no real story, but is set in a series of mystical mountains with various platforming setpieces that all test what you’ve learned so far with your abilities. Aside from the finale, those are the only worlds so far, which is a little disappointing, but the Kickstarter did make enough to add some more as free DLC; they should be out sometime next year. 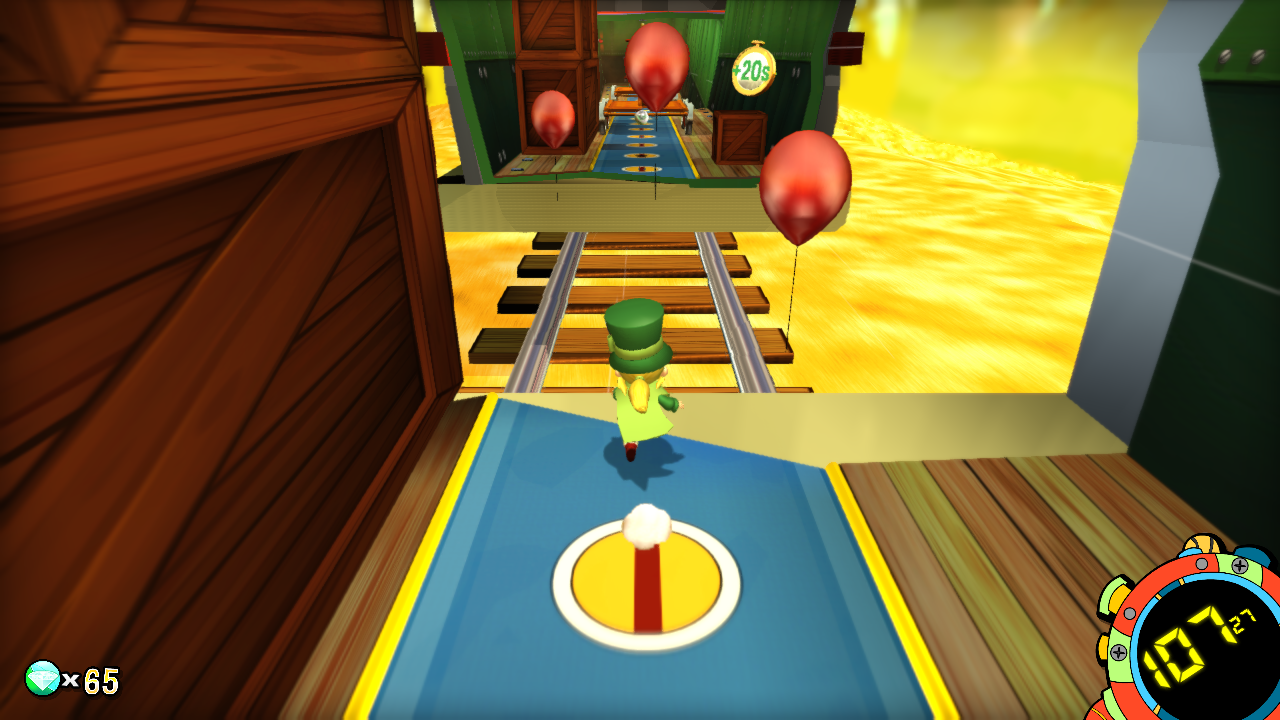 What is there though, is incredibly fun to play, thanks to Hat Kid’s tight controls. She doesn’t have that many moves in her arsenal, only a double jump, a diving tackle, and wall-running, but you can cover a lot of ground with them and the level design works with it, so you can make your own path and shortcuts in many cases. Since her name is Hat Kid, you can also knit yourself a lot of alternate headgear with wool you find dotted across the stage; those do things like let her run fast, lob explosives, or make certain transparent platforms visible.

Since levels are either open or have a lot of hidden nooks or crannies, naturally there’s stuff to find besides your main objectives. There’s a lot of ‘relics’ (stuff like a hamburger sofa, or a set of crayons, which Hat Kid will give her opinion on) you can find in chests that when put together, unlock Time Rifts somewhere in a level that grant you another Time Piece once you complete a platforming challenge, ala the No Fludd levels in Sunshine. Some of these grant little comic strips explaining some backstory for characters in that level, similar to the Memory Vaults in Psychonauts. So it definitely does pay homage to earlier games in the genre, but isn’t overbearing about it. 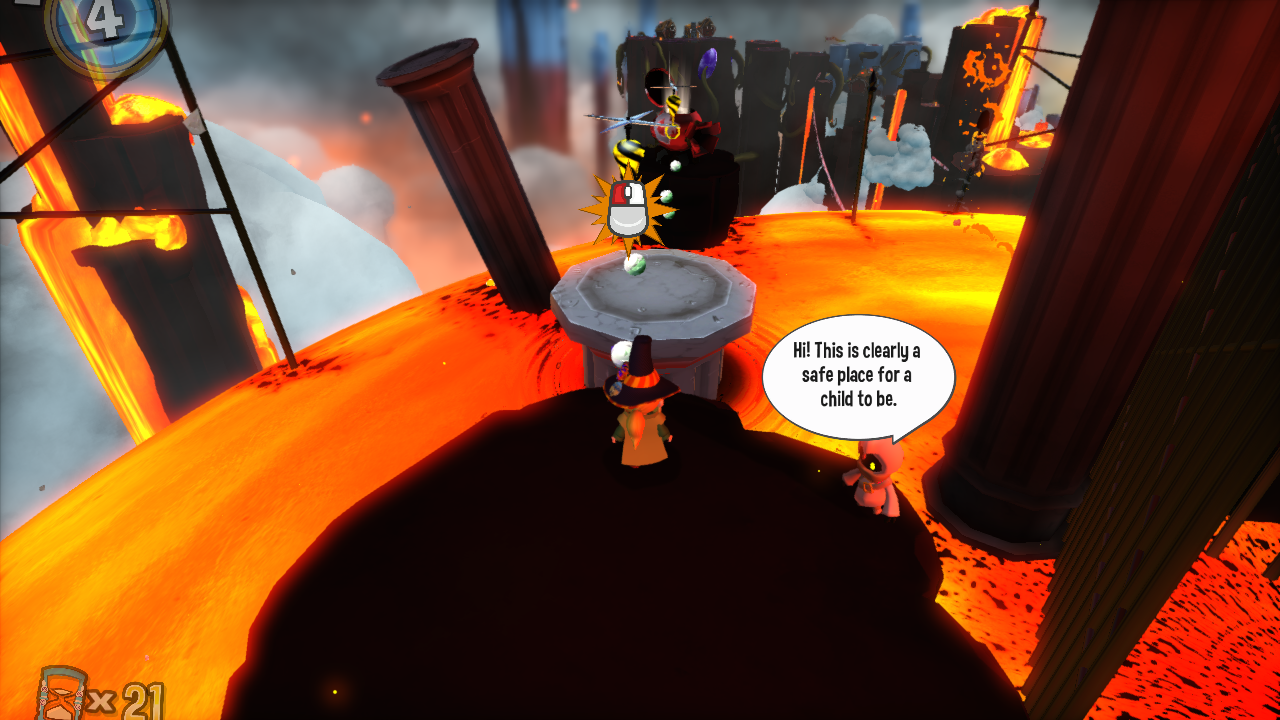 Overall, after playing through most of the game, I couldn’t find much to complain about with A Hat in Time. The only real minus is its current length, but that may be a subjective flaw. Lately I’d personally rather have a shorter game with a lot of focus and effort put into it rather than a long one that’s a bit bland all-around. Even if it’s only around ten hours, A Hat In Time is just a fun game, and for that reason I give it an easy Auto-Save.