Post Human W.A.R  is a bold and unique take on the dull hex gaming world. Rejoice in its lunacy and polished gameplay.

At the dawn of our third millennium, mankind went extinct, leaving behind a deeply affected planet Earth. Ferocious mutated animals, household robots converted for warfare, and inventive monkeys in tracksuits battle it out to decide the fate of the human heritage.

Form your armies and set off on an adventure through solo campaigns, or face off against players online. Experience a purely strategy-oriented gameplay with nothing left to chance, and filled with tactical challenges, bluffs and absurd humor.

Another day. Another passion project. This time it’s from the good folks at Studio Chahut. A team of six, residing in the sunny climbs of Grenoble, Southern France. This talented group of developers have been beavering away on Post Human W.A.R  ( I shall abbreviate as PHWAR from here on ) for six long years. My writing colleague Genkipro previewed the game back in June and since then the title has had fourteen updates. This shows the level of commitment to the project. The two issues he raised in his article were the lack of in-game saves and the overall AI. I’m glad to report that both have been resolved in this final release candidate. 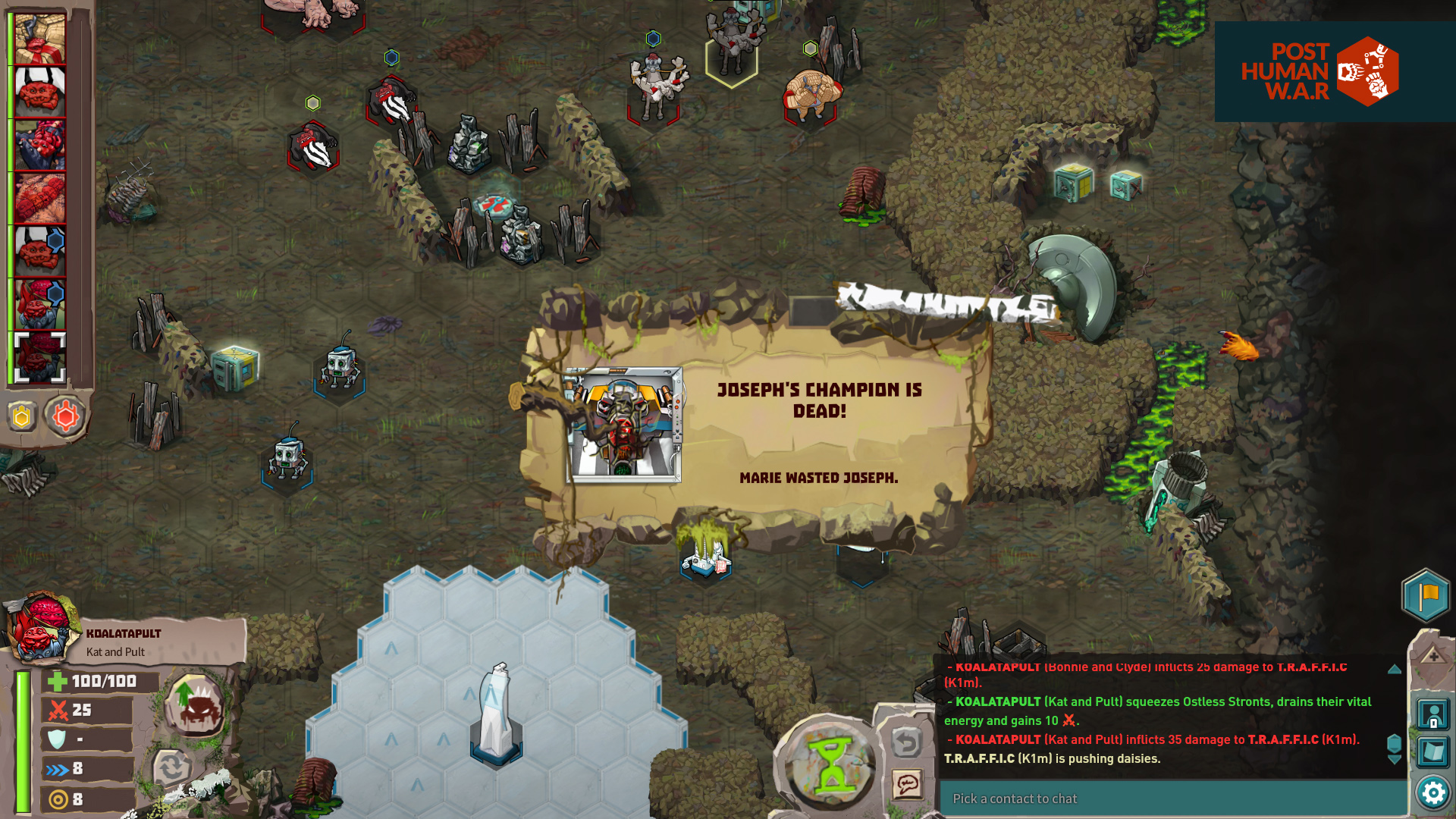 Set in the far-flung future PHWAR’s history is a strange hybrid of Wall-E meets Planet of the Apes, with a cup of The Thing thrown in for good measure. It’s a totally bonkers premise, but one that’s in keeping with the art style. Three factions duke it out for control of Earth sans humanity. The R-PATCH is a weaponized troop of domestic robots, duty bound to protect the last vestiges of mankind’s buildings and infrastructure. Stronts are parasitic blobs who have mind melded into two factions. One, a bunch of unruly apes called the “Anthropists” and secondly the “Wraaks”, mutant creatures hell-bent on returning the world to nature’s law.

Let’s put some meat on the bones and see what is included in the 1.0 package. There is a campaign mode with eighteen missions split into three parts covering all the factions, Local and online multiplayer mode, and finally a skirmish/ practice mode.

The campaign mode should yield about 15-25 hours of content depending on the skill level of the player. There’s a good mix of mission types, ranging from the total annihilation of all enemy troops to rooks drift-type horde encounters and escort operations.  Once completed, an expert mode is unlocked to further challenge hardened pros with much more challenging and stronger foes. In-game cutscenes top and tail all missions, adding to the gameworld lore in an entertaining and enlightening manner. These can all be skipped for impatient folk.

Skirmish mode is the bread and butter of any good strategy title. Once you have burnt through the solo campaign, its the mainstay and add endless amounts of solid gaming if implemented competently. PHWAR’s is the best I’ve encountered in a long long time. Its replete with options and QOL features that show a level of polish I’ve only ever encountered with venerated devs like Westwood or Intelligent Systems. You get a generous 15 maps to choose from. along with custom loadouts, which can be saved as well imported and exported. There are two levels of AI or a hot seat opponent. session recordings, custom resource points, and handicap points to level the balance against more experienced players. It’s a pleasure to see such a well thought out mode and not just bare bones offering that some lazy devs might conjure up in an afternoon.

Oh, I forgot to mention a couple more features on the main menu. There’s a coin shop where you can spend your PVP winnings on cosmetic fluff such as Avatars, unit colors, skins, and animated chat emotes called “Parleys”. A verbose unit Codex can also be perused by clicking on the book icon in the bottom right corner of the screen. 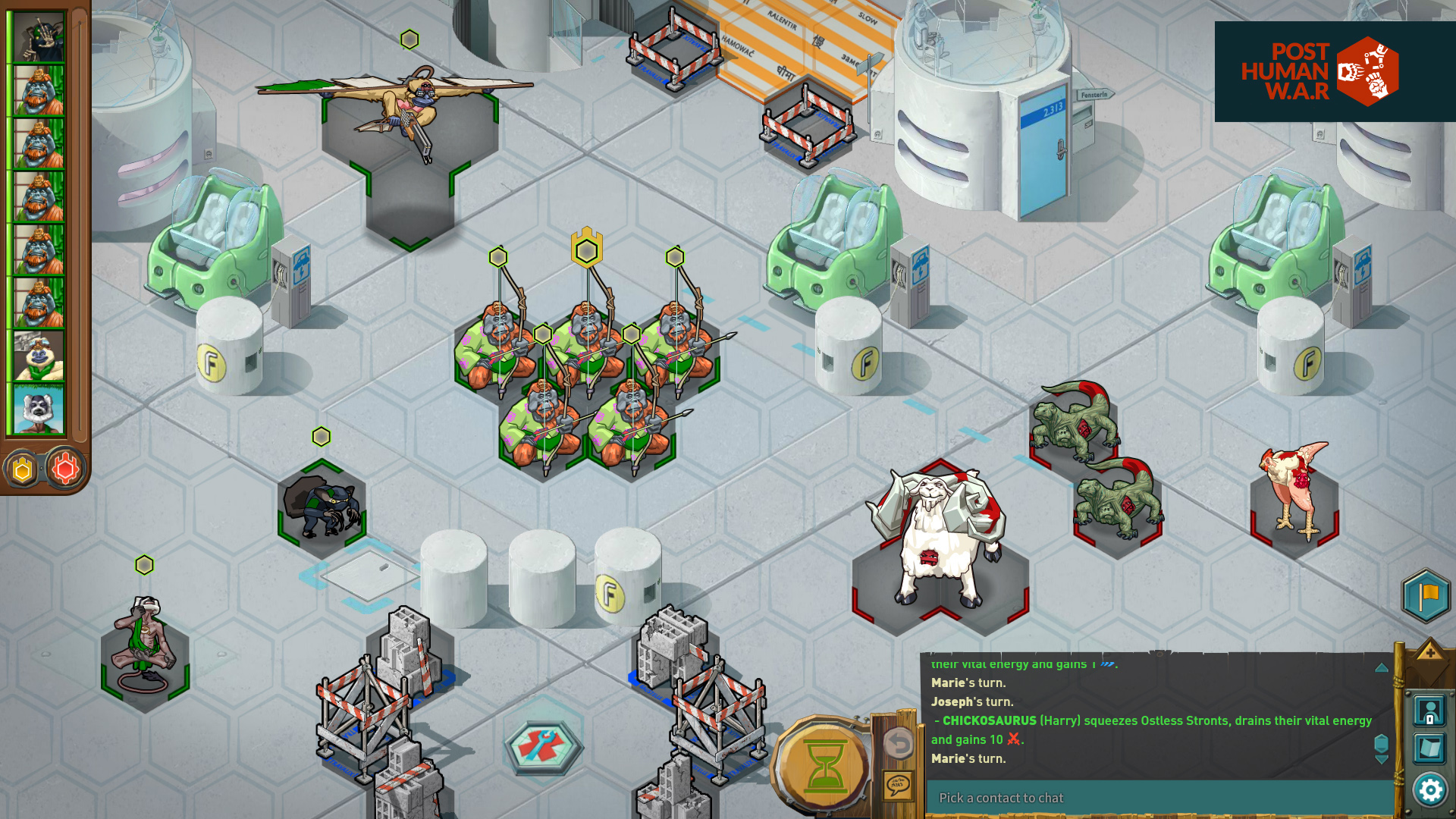 In order to make the gameplay as accessible as possible, Studio Chahut has removed the usual systems found in a typical turn-based strategy game. There’s no fog of war, no dices roles in combat, and no base building. Every stat is clearly displayed for all to see. To further this cause there is also an undo button on the first phase of any move or attack. What you see is what you get. No ambiguity, no fudging, and no howls of derision if a badly equipped or thin-skinned unit bested one of your troops with some dodgy fluke move. This distils the gameplay and removes any element of computed chance. To also aid the player, there is hit point information which plainly shows whenever one of your units can attack a foe.  This reliably informs how much damage you will inflict, taking into account armor and unit type.

Clicking on any enemy unit shows their zone of attack and movement range. This is a great help against archer class foes, to keep your prise, or keep an underpowered or champion unit out of harm’s way. There’s also a groovy QOL feature to add to this. By right clicking on any tile, you can measure out distances by dragging the cursor to another block. Cool beans.

At the beginning of all PVP sessions and most campaigns, players start missions with an equal amount of unit points. These points will allow them to pick units during the initial composition phase. This can vary depending on the power and size of the troop. You don’t have to spend all your points straight away and can hold back some in order to boost your unit’s stats during the match. This is a clever feature, allowing you to see an encounter unfold and act according. For example, if one of your units gets into a tight spot or you want to blitz a foe with increased attack stats in the hope of punching a hole in an enemy defensive line.

Taking inspiration from Warcraft 3, you have a champion/hero unit. In PVP mode you can select any unit during the starting loadout phase of the game as this important troop. This can then be revealed or left hidden, adding the element of uncertainty or surprise to your opponent. This feature is the one unknown mechanic in the whole game. Bluff and subterfuge are now components of every battle. If a champion unit is taken down then the host team starts taking damage every turn. 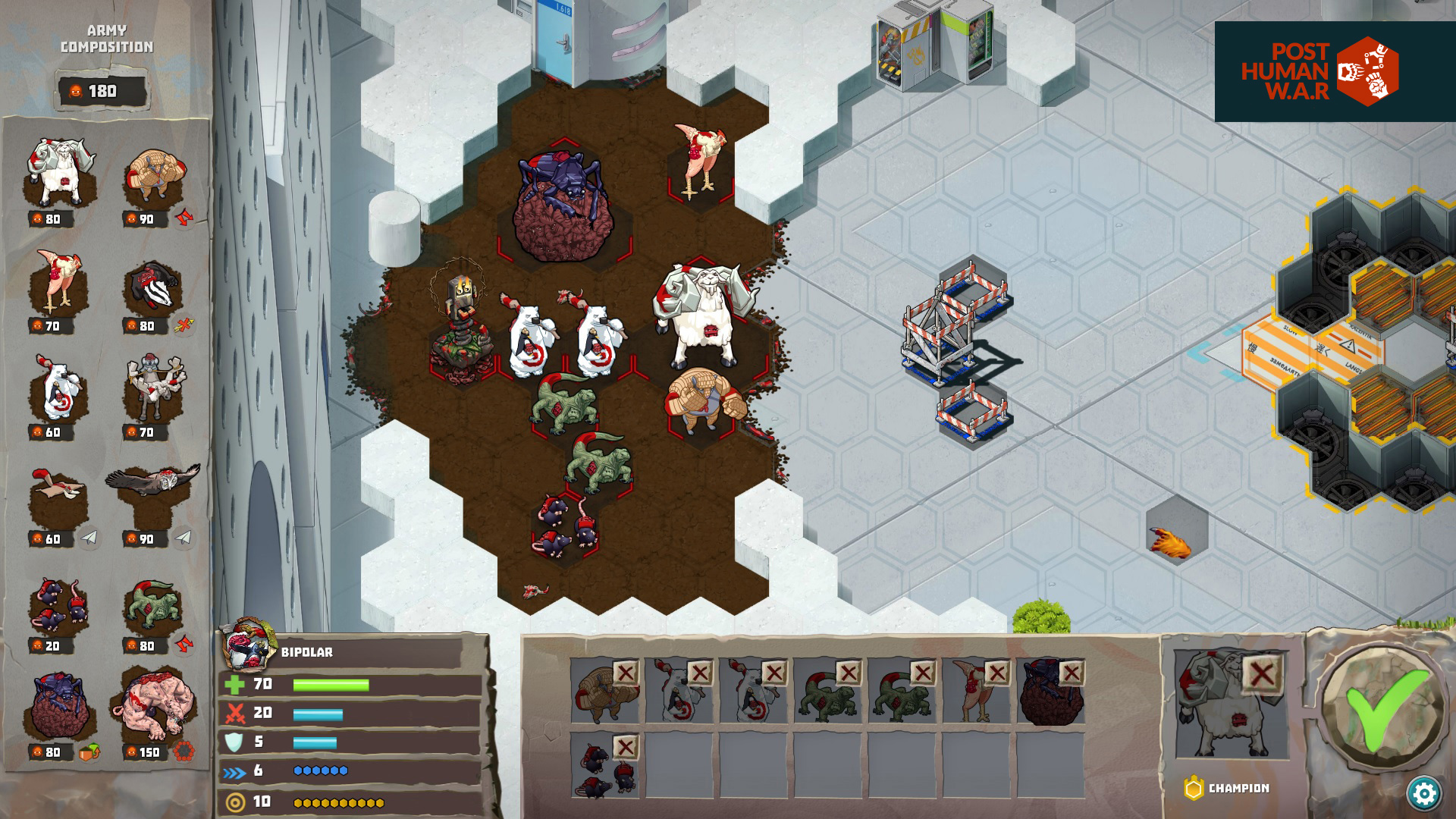 The game’s aesthetic is far removed from the usual hex war game which normally fall into one or two camps: A dystopian future full of hover tanks and high tech battlefield weaponry or a historical reenactment of a WW2 theatre assault. These can be overbearing, dull, staid and just plain stodgy affairs which do nothing to reach a wider audience. Merely pandering to the hardcore strategy fan. PHWAR’s whimsical atmosphere lifts the overall experience, making the gameworld more fun and easy to get wrapped up in. I’d liken it to the approach by Intelligent system’s classic Advance Wars titles on the GBA, with their cartoony adversaries and light-hearted tone. This doesn’t detract from the overall polish and depth of the gameplay.

Given the game lore. The unit design is way out and wacky. It’s almost like Team Chahut has channeled Terry Gilliam and the ghost of Frank Oz in some weird dev ritual to come up with a bonkers assortment of characters.There are some obvious standout units for me that include an Italian stove droid called Cookix, D4rth the Hoover, K4rl; the slightly camp german floor cleaner, Bigwash B4rry; the massive industrial washing machine and finally, Calvin Candie; the pith helmet posh talking, tamarin monkey. These are all beautifully animated. There’s a fluidly to the death sequences, which goes above and beyond most games. They are Cartoon Network standard. 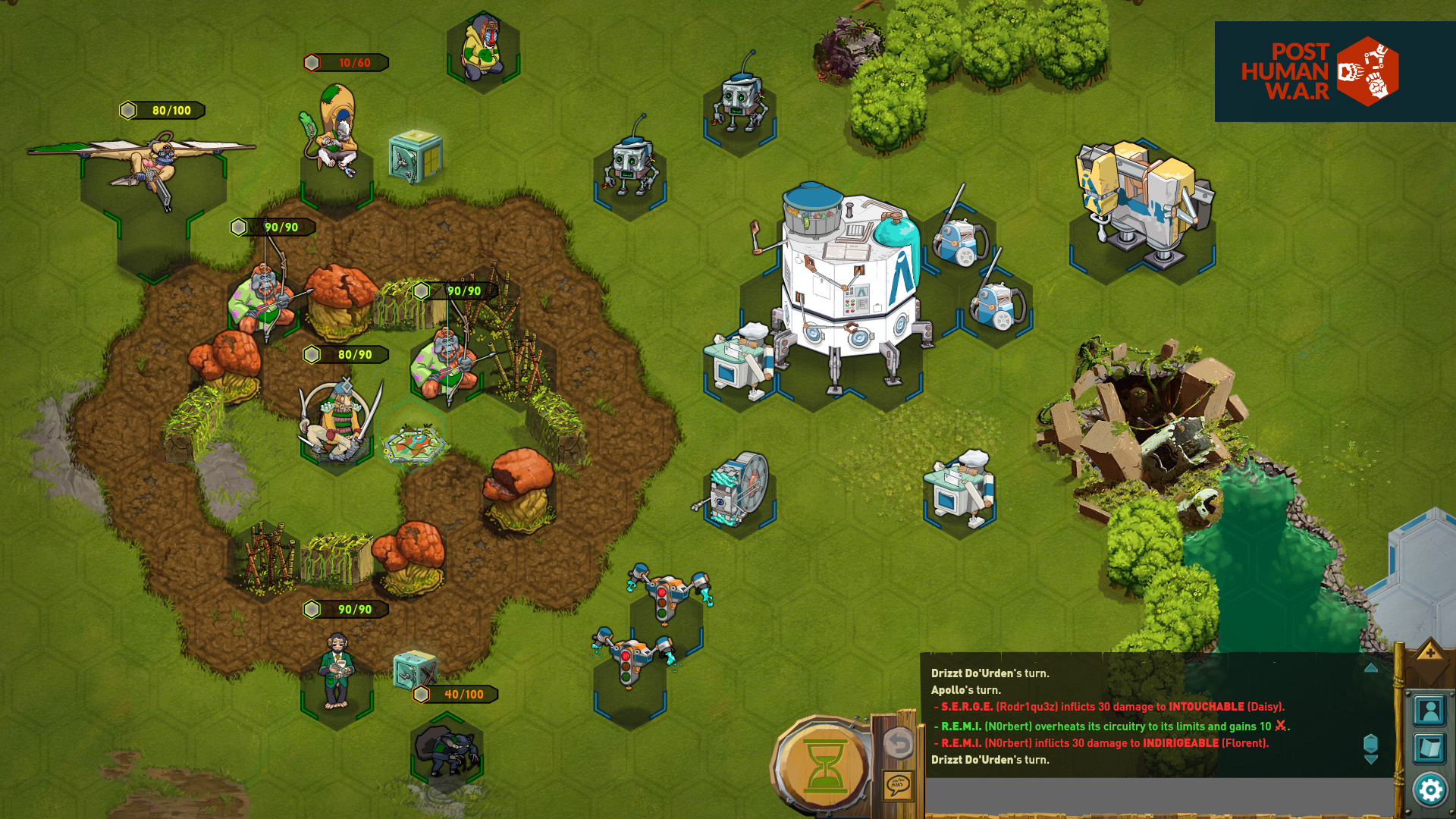 The main theme of the game is one of those tunes that’s slowly seeped into your subconscious. It’s a bombastic staccato military marching beat with sweeping orchestral overtones. The top line instrument sounds like a kazoo filtered through some kind of light distortion/bit crusher FX, giving it the feel of robot humming a melody. You could almost imagine some domestic droid busily going about its chores, buzzing away to this simple refrain. It fits perfectly into the general tone of the game.

Unit spot FX abound. I particularly like the bipolar bear and his penguin pal with the speech impediment, which has a definite nod to daffy duck. Or the koala bear and moose combo who keeps shouting “legalize eucalyptus”. There’s an underlying playfulness to the audio design. Right down to unit movement fx, which on some sound like a child’s bare feet pitter-pattering across a cold bathroom linoleum floor.

PHWAR is a bold move for any development studio to undertake. To tackle a niche market like hex strategy and give it a new lease on life. It’s an even bolder move to add such a quirky art style to the mix. Grizzled veterans may be put off by this aesthetic. It’s a risky venture. I for one applaud such a fresh and unique spin on one of my favorite genres. But this would count for naught if the gameplay was not rock-solid. After years in development, you can see the polish and attention to detail. All the feedback garnered from the beta testing phase of the project have been acted on. Every quality of life component you could imagine has been added. What is the result? A pristine jewel of a game. Oozing with a unique charm and wit, seldom found in the strategy genre.

Thanks for reading this review. Guess what? We have a limited number of free Post Human W.A.R keys and you may be a lucky winner if you’re quick! To claim your prize, please subscribe to our YouTube channel then contact JimDeadlock#0106 on Discord and say the pass phrase “I’m a banana!” While you’re there, you can join our very active general chat channel and shoot the breeze with us about games or anything.