Post Human W.A.R is a turn-based strategy game in Steam Early Access, with a post-apocalyptic setting and a lot of silliness.

Humans are extinct, but our legacy remains: huge cities, larger dumps of radioactive waste, and countless artificially intelligent robots. With no humans to serve, the R-PATCH — Robots of Protection for the Arts and Territories and Cities of Humanity — continue on, performing their basic functions and, with the discovery of mutant creatures trying to infiltrate or destroy the remaining human cities, defending humanity’s home.

The mutant creatures are the Stronts: blob-like creatures able to possess mammalian hosts. But even amongst these creatures there is disharmony. The Wraaks, inhabitors of creatures lower down the evolutionary ladder, wish to destroy everything built by humans and return the Earth to a natural state. The Anthropists, on the other hand, inhabit primates and other more advanced creatures, and wish to inhabit and take over the human cities, becoming the new rulers of the planet.

The game is played on hex-grid-based maps from an isometric view. The graphics are clean, detailed, and with enough variation to make the maps interesting. Many maps are littered with amusing obstacles, such as portable toilets, statues, and plaques to future historical events. 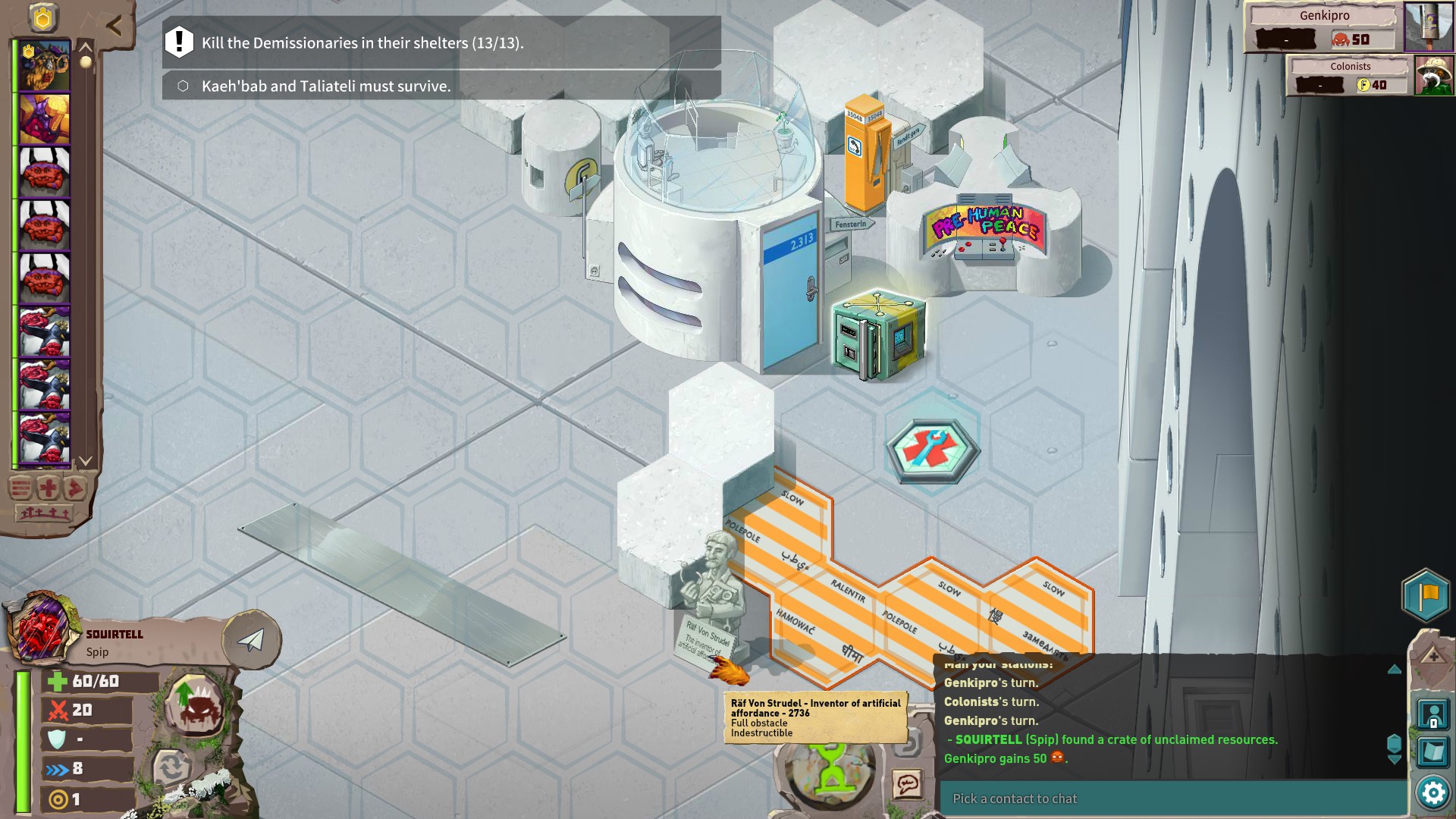 The units are very nicely drawn, and each faction has a distinct character to it that is represented well in the unit graphics. There are plenty of details and the animations look great, too. The artists have done an excellent job.

Cut scenes come in two forms: a small number of fully voiced full-screen, crudely (but amusingly) animated videos that introduce the large-scale ideas in the game, such as game introduction and a video for each of the different factions; and a large number of scripted scenes that use the game engine itself, with text-based dialogue bubbles. Both are well done and full of humour, though the subtitles could use some editing.

The in-game interface is simple and neat, and works extremely well. Tooltips are provided everywhere they’re needed and the information provided is useful and seems accurate.

Graphics options are minimal, with no detail or effects settings provided. I noticed a bit of jumpiness in the map scrolling on occasion, but it didn’t detract from the game. 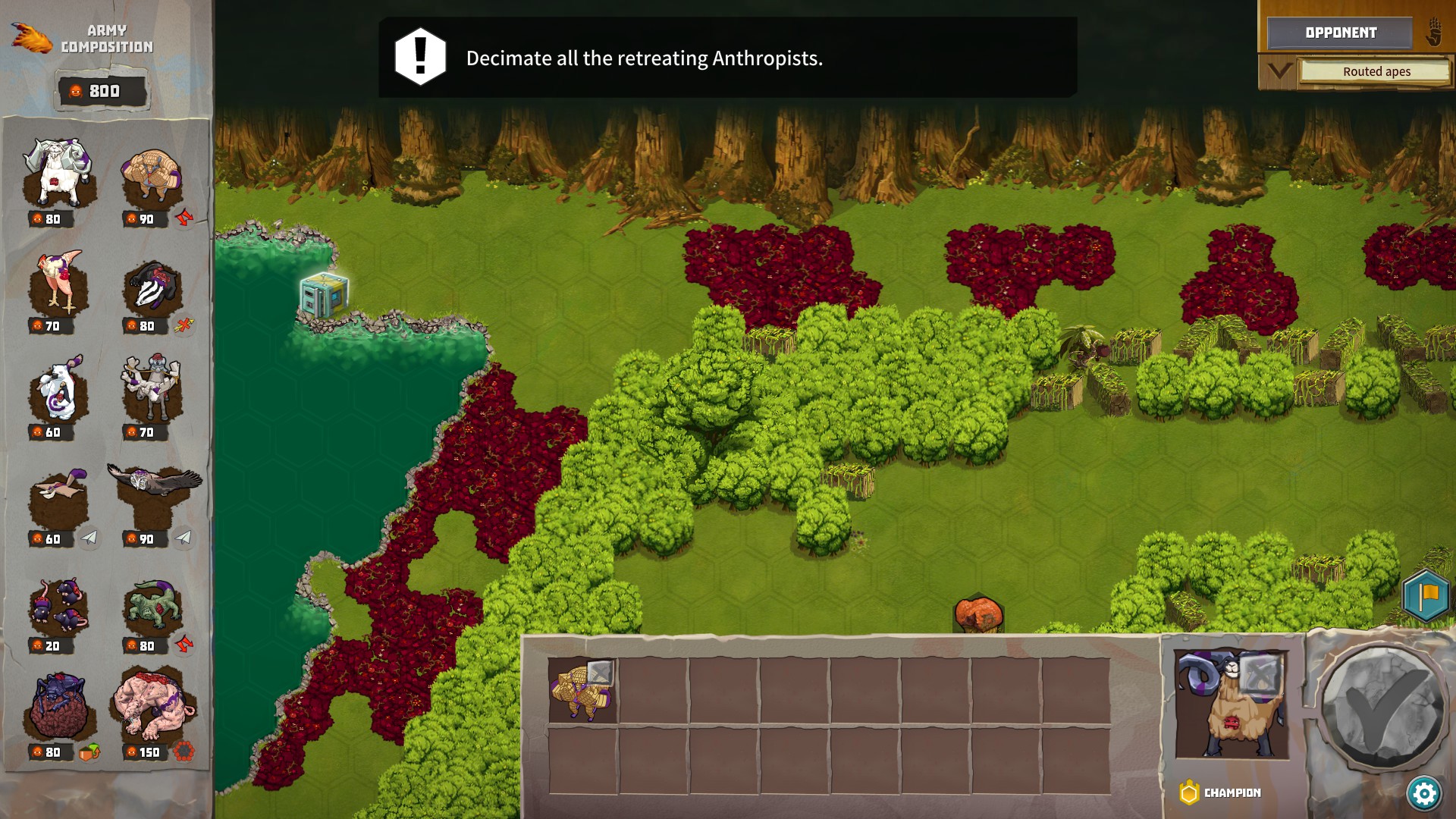 The game includes a number of different instrumental tracks ranging from an ‘elevator musak’ style to more dramatic battle music. Each track fits its situation well, though, and I didn’t find any of them annoying.

Sound effects are good and appropriate to their uses, but I don’t recall anything standing out as being exemplary (or awful).

Voices are mostly excellent and include the fully voiced videos as well as remarks when you select and order troops in game. There are one or two extremely annoying unit remarks that had me turning the volume down, but for the most part they are really very good indeed, though with absurd accents in many cases.

Post Human W.A.R is a turn-based combat game, and plays similarly to the other titles in this under-represented genre. There’s no resource gathering, base building, and troop training as you’d see in typical RTS games. Instead, the game presents you with a battle map overlaid with a hex-grid, and a certain number of resource points. You spend your points by picking from the available troops, deploy them to your starting zone, and fight your opponent in a series of alternating turns. Then you proceed to the next map. 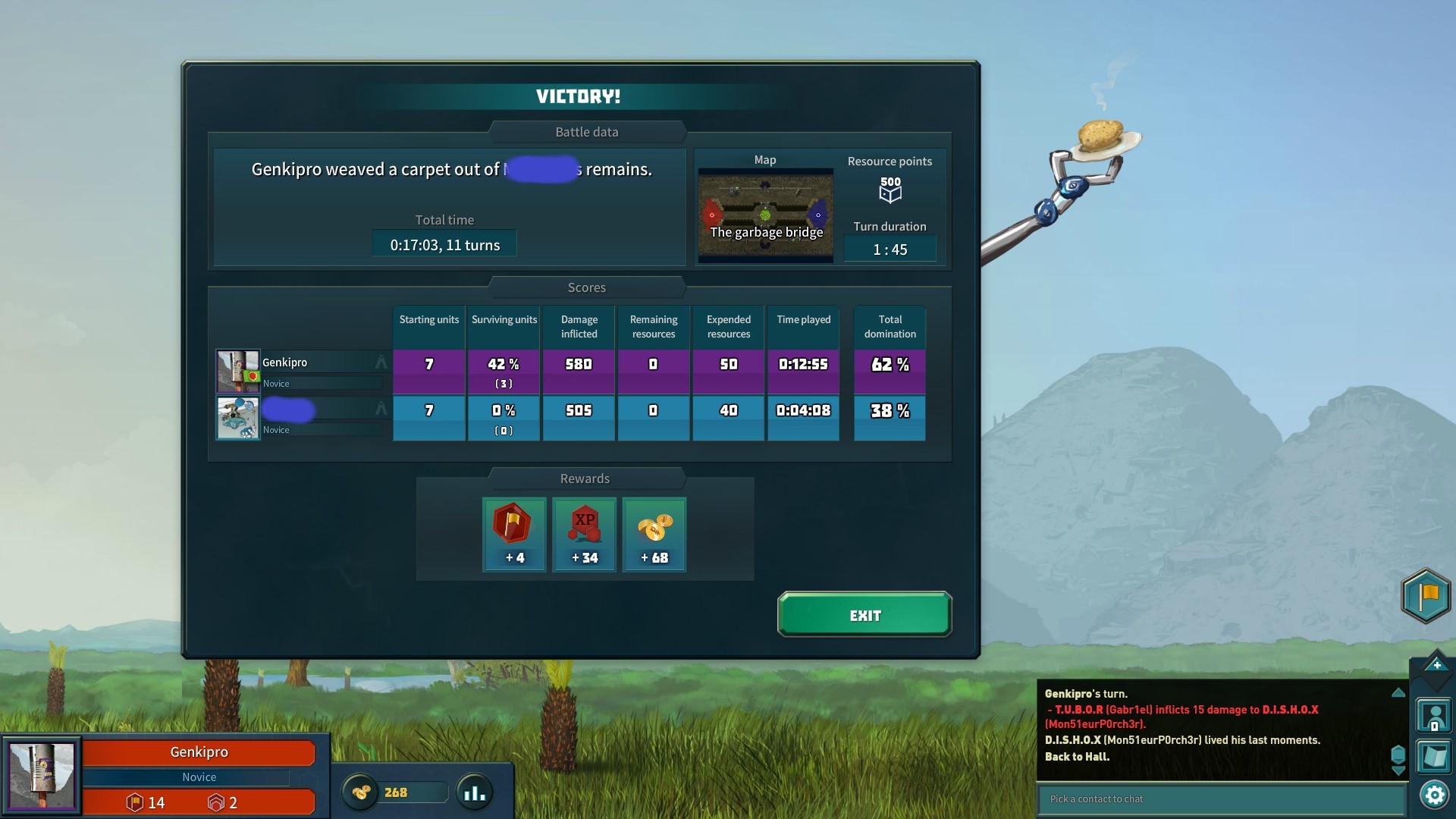 Each turn each of your units can move up to its movement rating or move up to half its movement rating and attack (in either order). The game’s interface shows you plainly where you can move and where you can’t, and helpfully highlights enemies that will be visible and in range of your unit for each hex in your movement range. Attacking a visible unit that’s in range always hits the unit for a specific amount of damage (minus the unit’s armour); there’s no pseudo-random-number generator here.

There’s a good selection of troops available, with differences between the three factions — each group isn’t just a graphical reskin of the others. Troops are very roughly divided into two groups: melee and missile (ranged), but with the variations in movement, armour, health, damage, and range, as well as a few special abilities, that distinction certainly isn’t the only one. Unit prices vary wildly, depending on effectiveness. I believe the cheapest unit is 20 points, whereas the most expensive is 180. I’m not sure if there’s a maximum number of units per battle, but conceptually, at least, one could have 60 of the cheapest unit in the largest multiplayer battle. There’s a very good codex that provides information on each unit, should you want to read more about them. 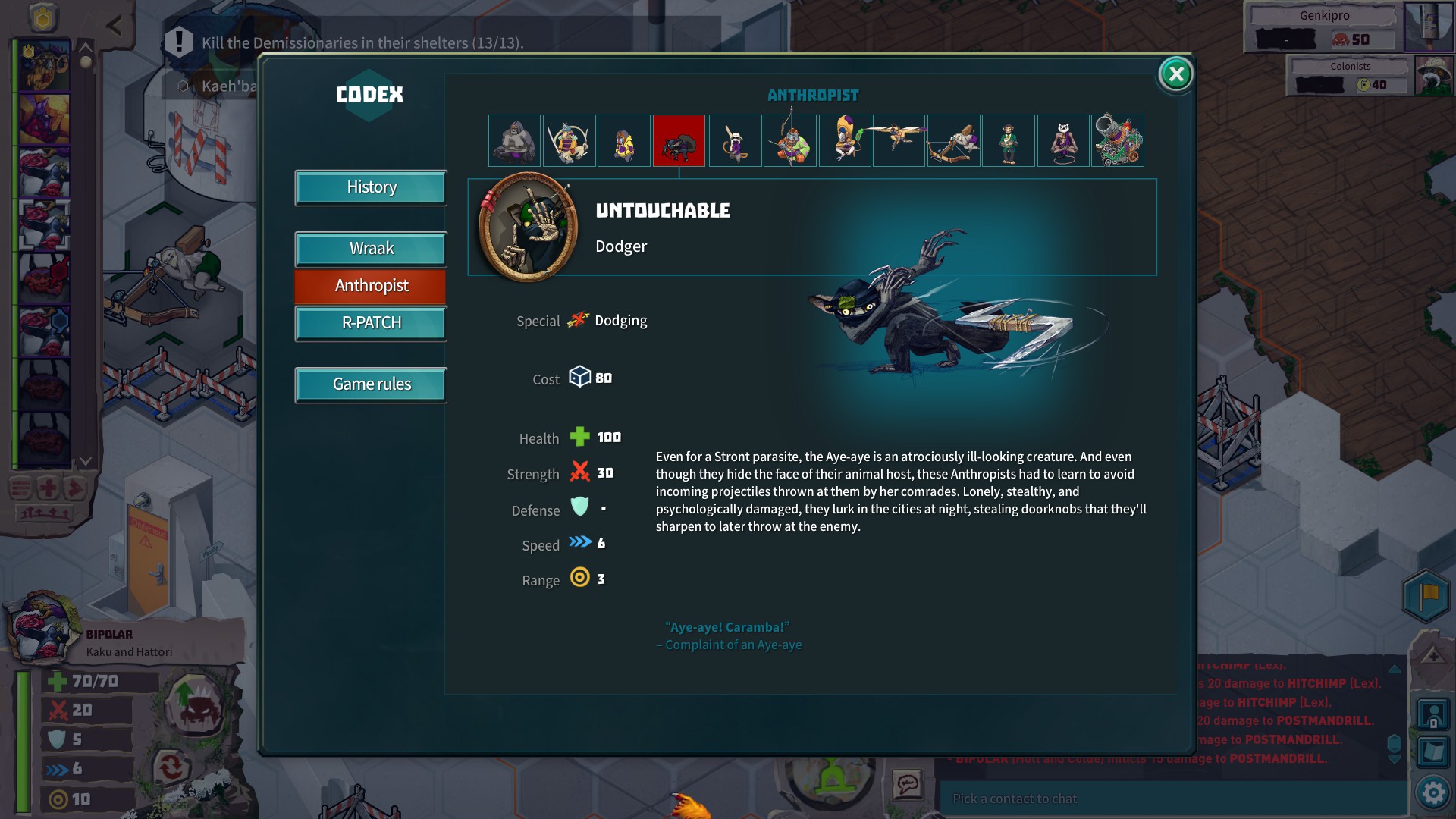 The game adds a couple of interesting features to the genre, probably the most important of which is the concept of a champion. Each battle you have a single champion, as does your opponent, but neither of you knows which unit is the other’s champion — they just appear to be normal units. The champion doesn’t receive any bonuses, but if you destroy your opponent’s champion then from then on at the start of every turn, every other unit in his army takes damage at the start of the turn. This adds a tactical element, but also a luck-based one. Get lucky, or be particularly intuitive, and take out your opponent’s champion early, and then all you have to do to win is wait. But if you’re unlucky, and a pot shot takes out your chosen champion, then you’d better hurry up and win, because time is against you.

Many maps also include totems within each army’s home zone. Take out the enemy’s totem and his units take damage each turn, just as if you’d taken out his champion. Take out both totem and champion, and you’ve almost certainly won the battle!

Maps include obstacles too, in particular the ‘murder holes’, which provide cover for ranged units next to them while allowing them to fire back. The game also adds a ‘cancel last move’ button, which is a valuable addition to a turn-based interface. For some reason, though, the developers chose to only let you use it three times per battle, which seems rather silly indeed.

I believe the game currently contains a three-mission tutorial (shown in the linked video), 18 single-player missions, and online multiplayer. So far I’ve only completed the tutorial, a handful of campaign missions across the factions, and a single multi-player game. There’s no way to save mid-battle, even in the campaign missions, which is a big oversight since they can take over an hour. There are not yet many people playing online — winning a single skirmish placed me in 84th position — but I’m sure that will change as the game moves through EA. There’s no hot-seat multiplayer (on one PC). 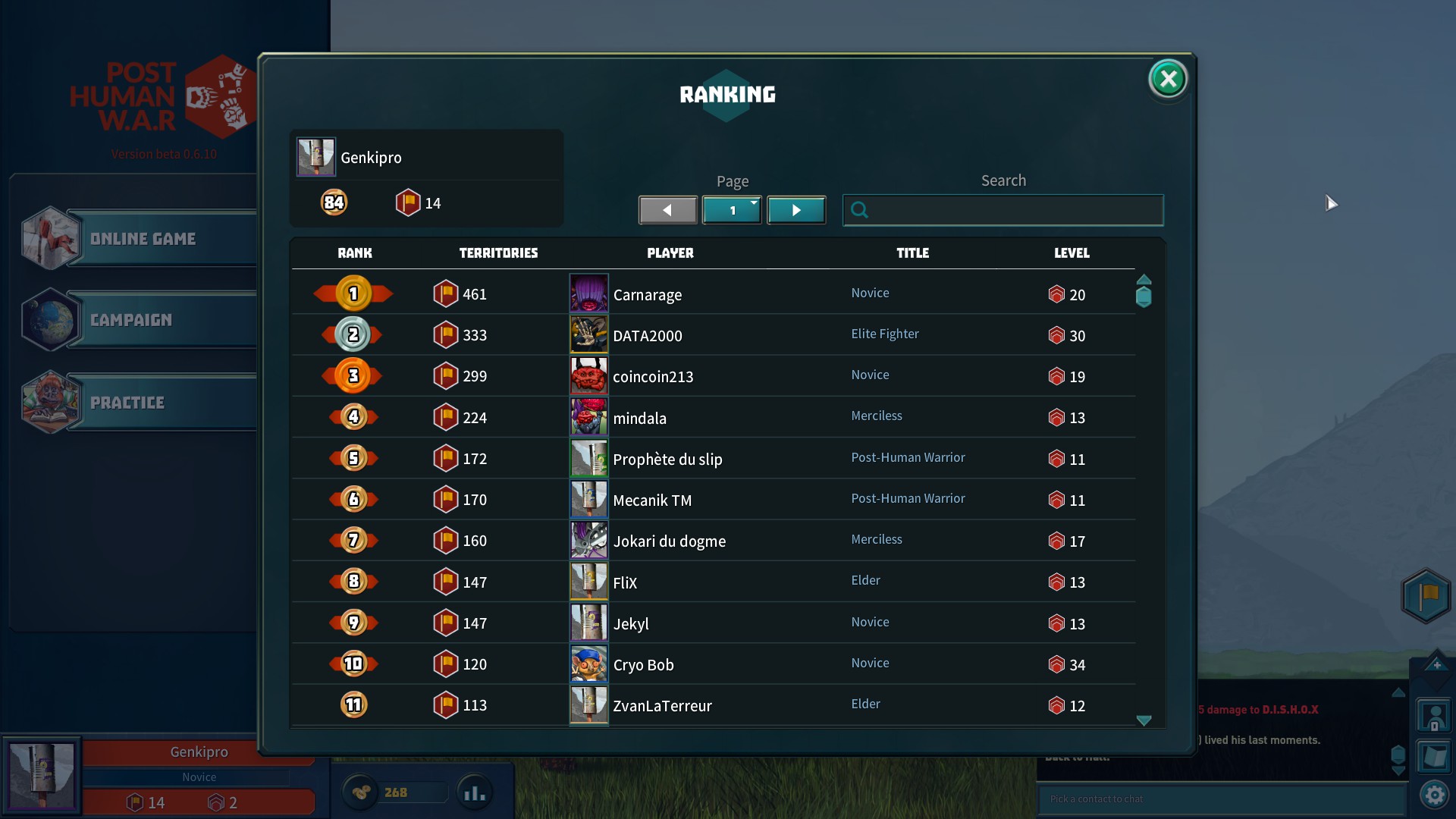 The AI in the game can be annoying, with escort missions being more frustrating than they should be. Needing to be online, even for single-player missions, is a bit annoying, too.

Cons:
– No in-mission saves
– Online only
– AI could be better

I love a good turn-based strategy game; I’ve spent more hours on Battle Isle than I can remember. Post Human W.A.R has done an excellent job of sucking me back in. Its original premise, factions that are all fun and different to play, and basic, but surprisingly deep tactics, all add to its appeal. The crazy sense of humour and elegant interface help, too.

In short, Post Human W.A.R is a bucketload of fun. 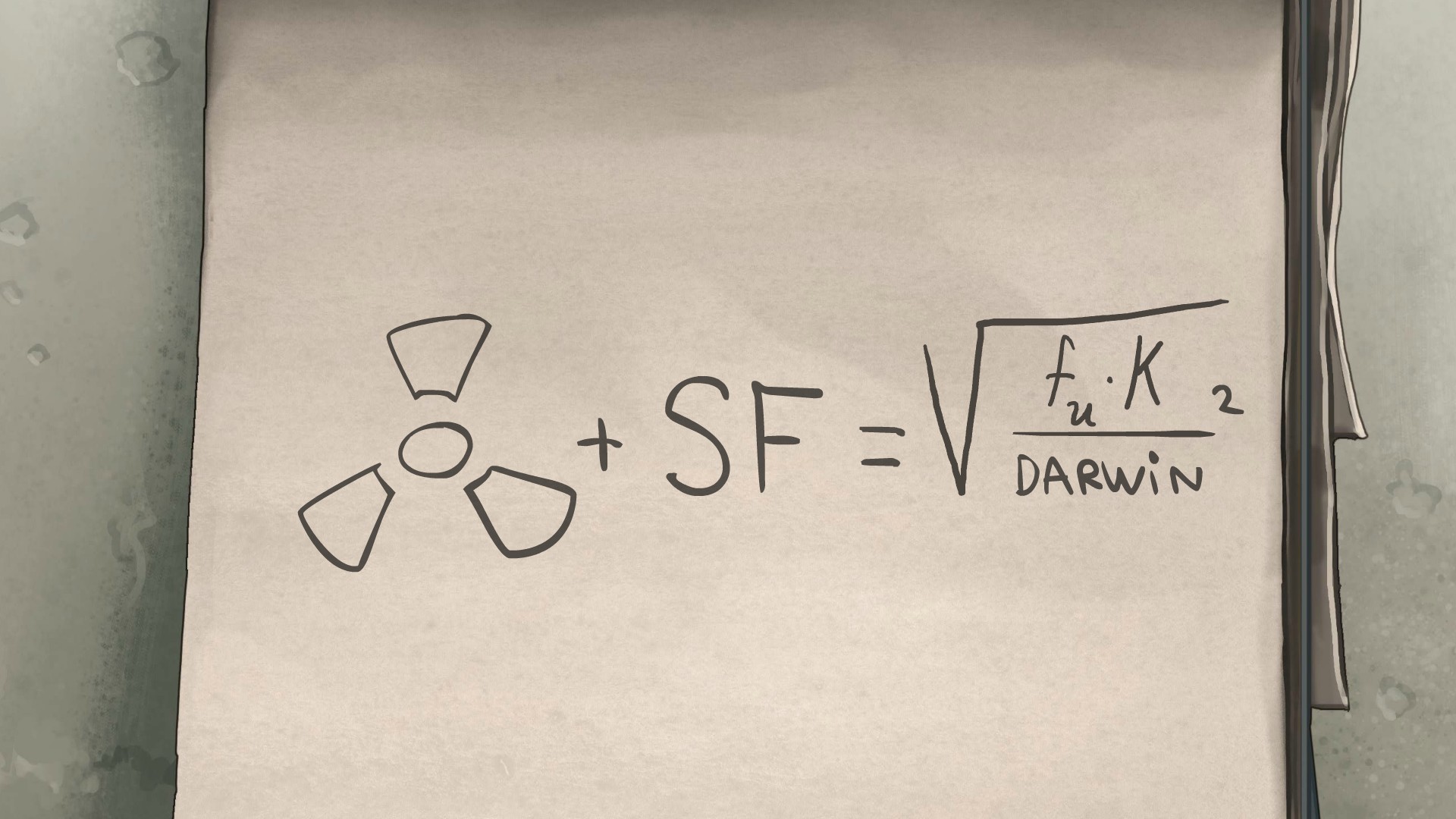