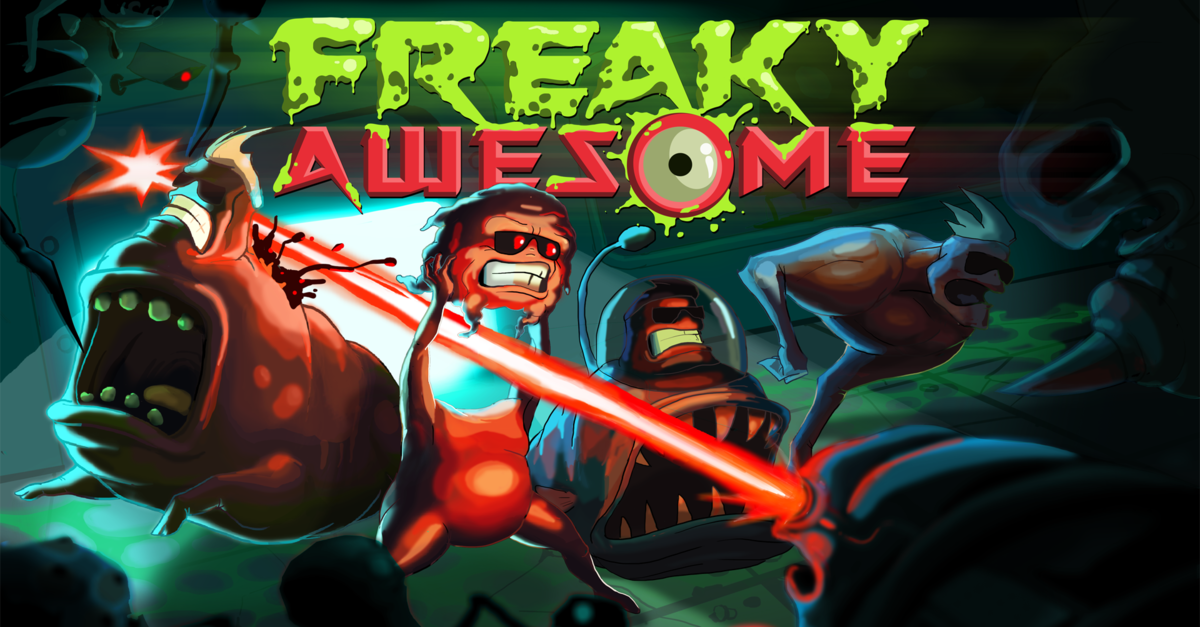 A mutated cross-over between The Binding of Isaac and Crawl. CO-OP friendly!

Good for your diet

How about a trip to a factory with spilled toxic waste all over? Nothing can go wrong. These mutated monsters are perfectly normal. That river you fell in? Monsanto’s best scientists proved that it was actually more healthy than real water, and proper for consuming. Just… just don’t look at yourself in the mirror after a bath, ok? Your body might feel different when you walk, but it’s just your nerve endings feeling elated. Nothing to worry about.

The Crawl of Isaac

Gross. Gruesome. These words could apply to The Binding of Isaac, but now they are proper ways of describing Freaky Awesome as well. If you played Isaac you will be on known grounds, as the concept is relatively similar: the player moves in procedurally generated rooms with the occasional locked doors, frequent monster, and occasional spikes. Eventually there is a boss fight before jumping down and exploring a new level. Now use Crawl’s dark pixel art as a graphic style, add the ability to play the game with up to 4 players, and you have Freaky Awesome. But apart from these similarities, the game is its own beast. 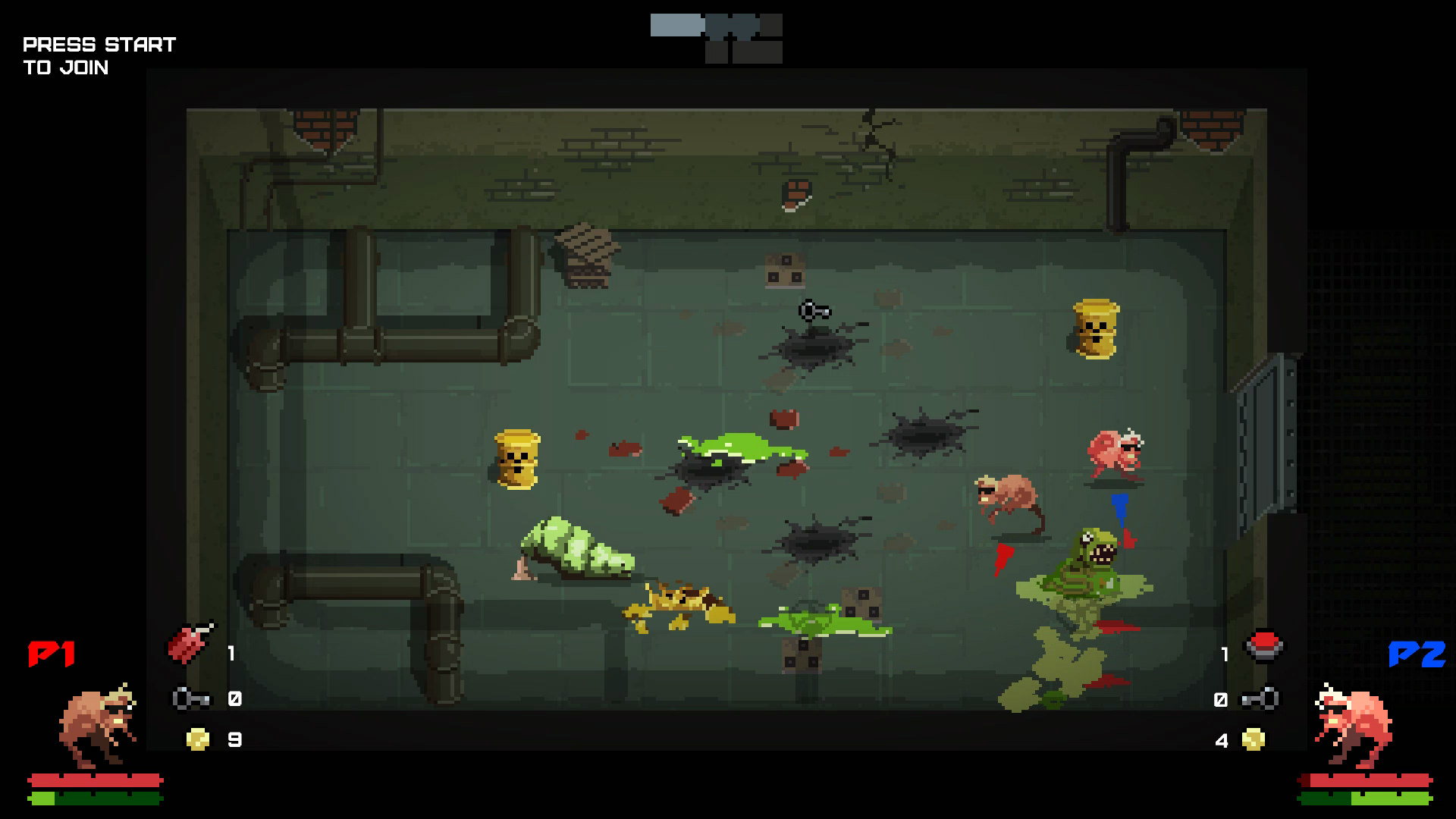 Combat in Freaky Awesome is mostly melee hand-to-hand combat. Wait, no. Head-to-hand? Foot-to-claw? Or whatever these strange limbs are. Only a few mutated forms have a longer range. While this can often feel clunky in top-down games with only 4 aiming directions, here Freaky Awesome has the good taste to let players orient their attacks with 360°C of freedom whether with the right stick or… the mouse. More games should do that. Each form also has a secondary attack, such as a dash, a stun or familiars laid with eggs. Considering that closer quarter combat is more dangerous, in comparison to other games it is also easier to get health back from the corpses… poodles… of fallen enemies. The drawback is that consuming blood can accelerate the mutation process and force the player to change form. Not all forms behave the same, so you might be happy or unhappy. New forms are gradually unlocked in a system of permanent progression, as well as stats boosts and passive powers. 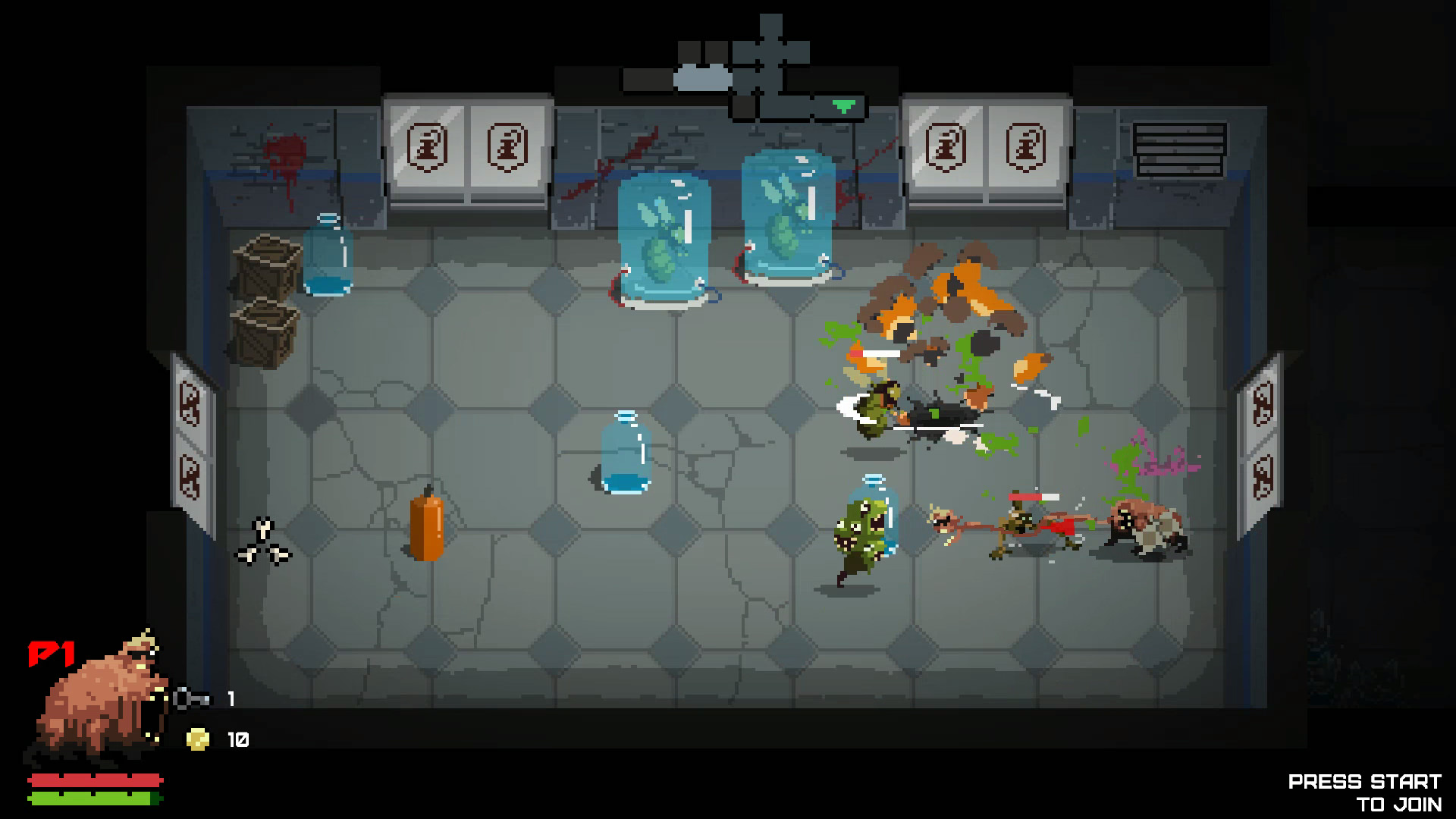 Let’s dedicate a whole paragraph to the systems at play here. Health regen is commonplace, and permanent progression is always determining the form and strength of players right from the start of a new run. I absolutely get behind this choice, since it removed the frustration from randomly generated numbers (RNG) and removed chance from the equation. It’s all about player skill and decisions, and although RNG was accepted when Isaac was the first game to occupy the roguelite genre, now it gets harder to willingly invest that much time in a game for many runs to be ruined by bad luck. However, the downside is that the play experience does not wildly vary from one Freak Awesome run to another. That is, eventually the game feels repetitive as it takes more time to find new forms and new areas. 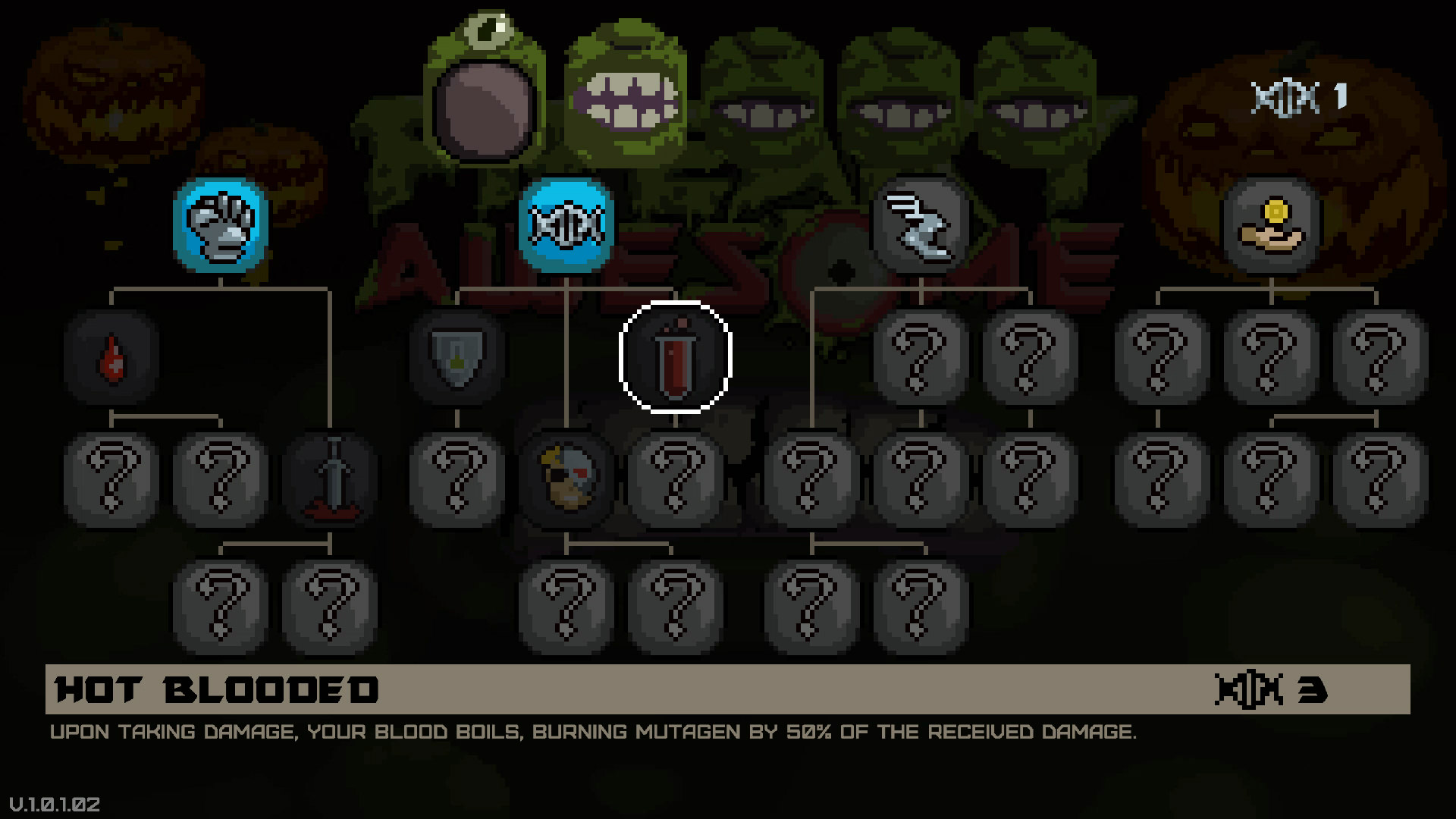 Technically, the game runs like a charm at 60 frames per second. Keys are fully rebindable, whether on the keyboard or on controllers. The sound of the game is pretty good, from the menu blasting in full force to the intense music during the levels. The music feels part of the madness and a good incentive to go forward on a violent rampage. Cooperative is enjoyable (with online coop in beta), enemies are multiplied and a fallen player can be revived although they will remain in bad shape as to not make the game too easy. 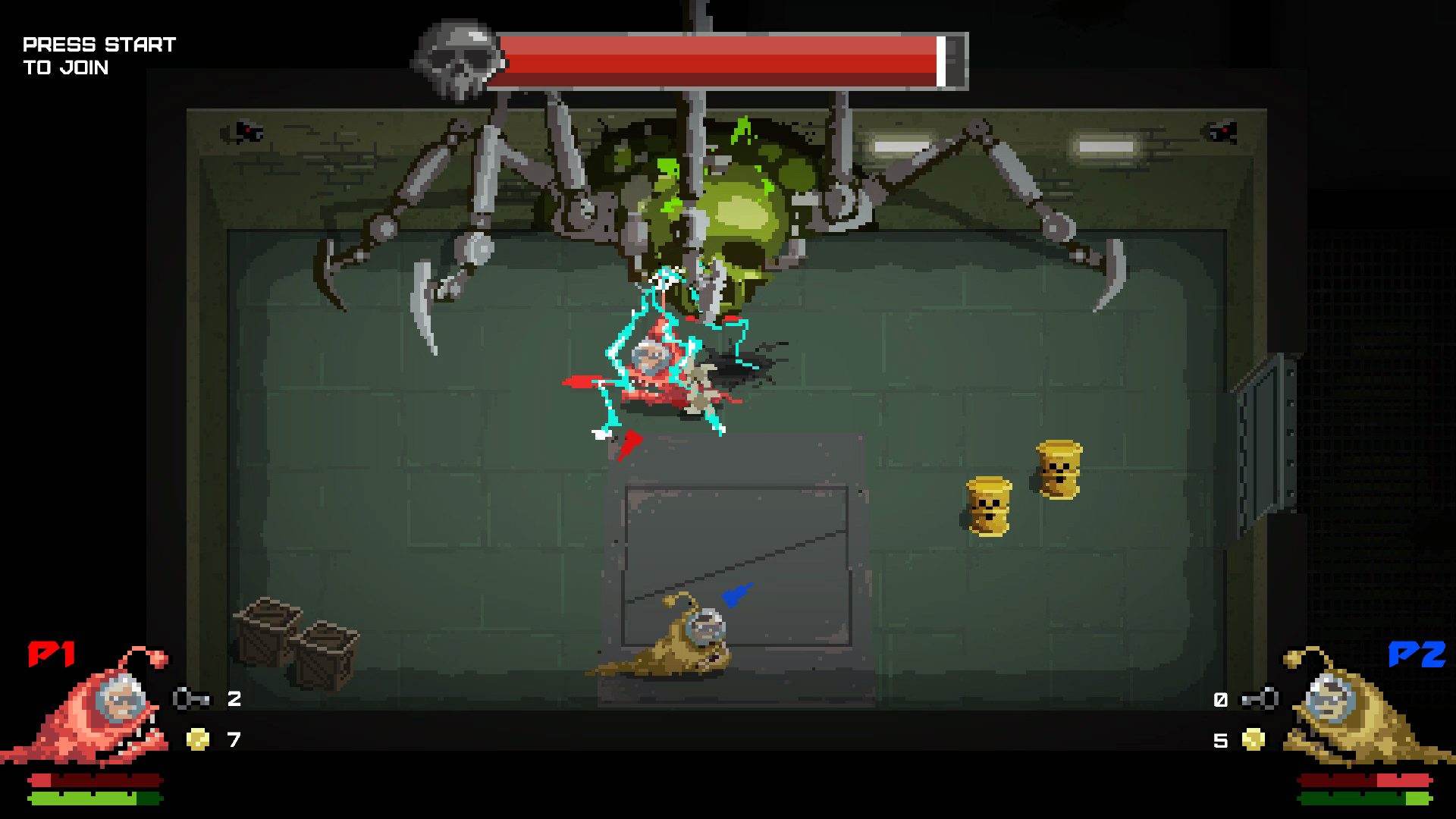 Freaky Awesome is a fun roguelite, I absolutely loved playing with its slimy beasts. Art design is deliciously gruesome and gorgeous, the combat is messy but enjoyable, and the permanent progression and other systems in place effectively replace chance to make each run a good run. However, the game can feel a bit repetitive if played several times in a row. Maybe alternative levels and more enemy types could fix that, although with things as they are it still is damn good and a more streamlined approach to games like The Binding of Isaac. With up to 4 players coop!