Break into a maniac’s house to discover what he hides in his basement!

Hello Neighbor is a beautiful idea. Players have to break through the house of a crazy neighbor with a learning AI and find their way to the basement. The concept is exciting, the art style is cartoonish and surrealistic, and Youtubers/Streamers quickly got hold of the alpha versions to give Hello Neighbor a cult following and make it a hit before it was even released. Does the final game hold up to scrutiny? 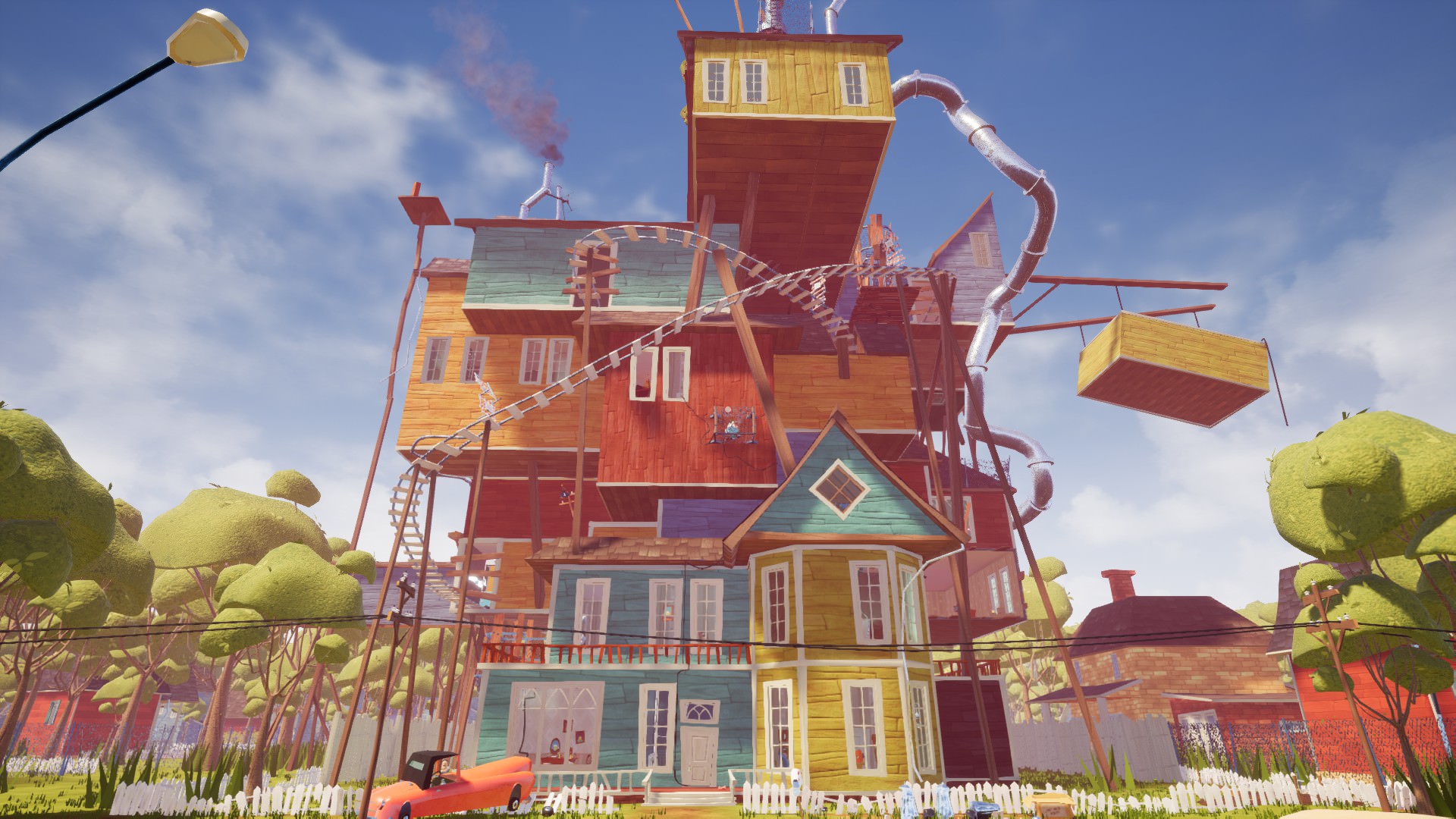 The short answer is: no, Hello Neighbor does not hold up. But how could it? Despite its brilliance, the concept was also flawed from the start. Isn’t it annoying to have to solve puzzles when you have to travel all the way to them again, and an increasingly smart AI makes it harder as you go along? During the alphas, I often found it better to straight up restart the game to remove all the new traps and cameras that the AI positioned all over my favorite spots. Thankfully, the developers thought about how a stronger Neighbor could hinder the experience of many players, and a friendly mode was added so the antagonist is slower and its toolset is limited. But then, what about the puzzles? 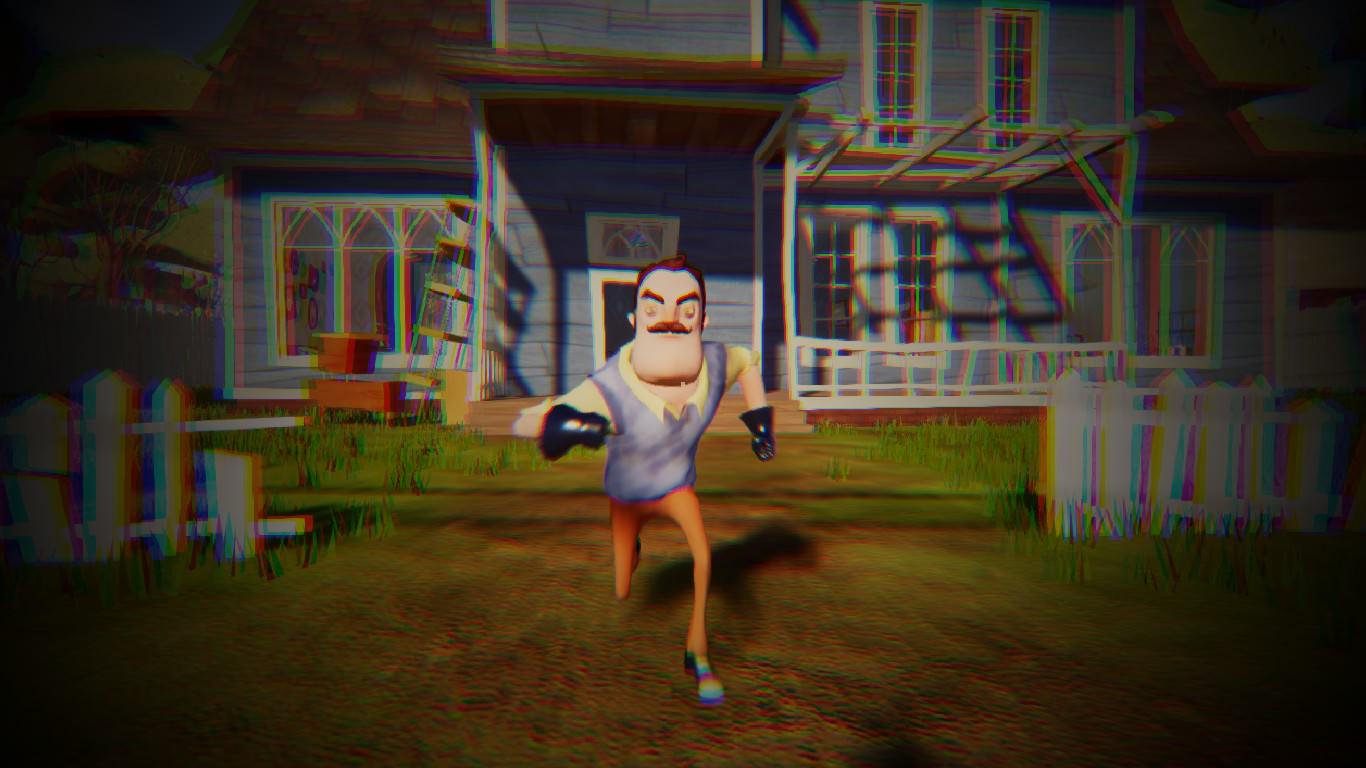 Problem is, the puzzles can be infuriatingly hard to figure out. Not because they require advanced intelligence, but because many elements are hard to find and require platforming. Platforming such as piling up a stack of boxes, only to be ejected into the sky by the wonky physics. Or jumping on bushes, only to fall in the middle of them and having no way out. It was clear from the first act that this would not be a pleasant journey: while the first act was supposed to teach the basics of the design of the game, there was some sort of makeshift ladder hinting that the roof could be accessed. I managed it, only for the game to knock me out and force me to restart. I tried another time by using an ejection glitch, and the same thing happened. I learned that the roof was to be avoided and tried to figure out where in the house I could find the key, and before giving up I looked online and saw that my initial plan was good, just that for some reason the game had decided to punish me the first time I tried. The second act turned things around: there is a pipe puzzle to figure out in order to receive other items. It was a pain to solve, and at some point, an ejection bug threw me out of the garden. It triggered the end cutscene, since my aim had been to escape from this house. Then the third act goes back to a house full of puzzles to explore, and this one is huge. 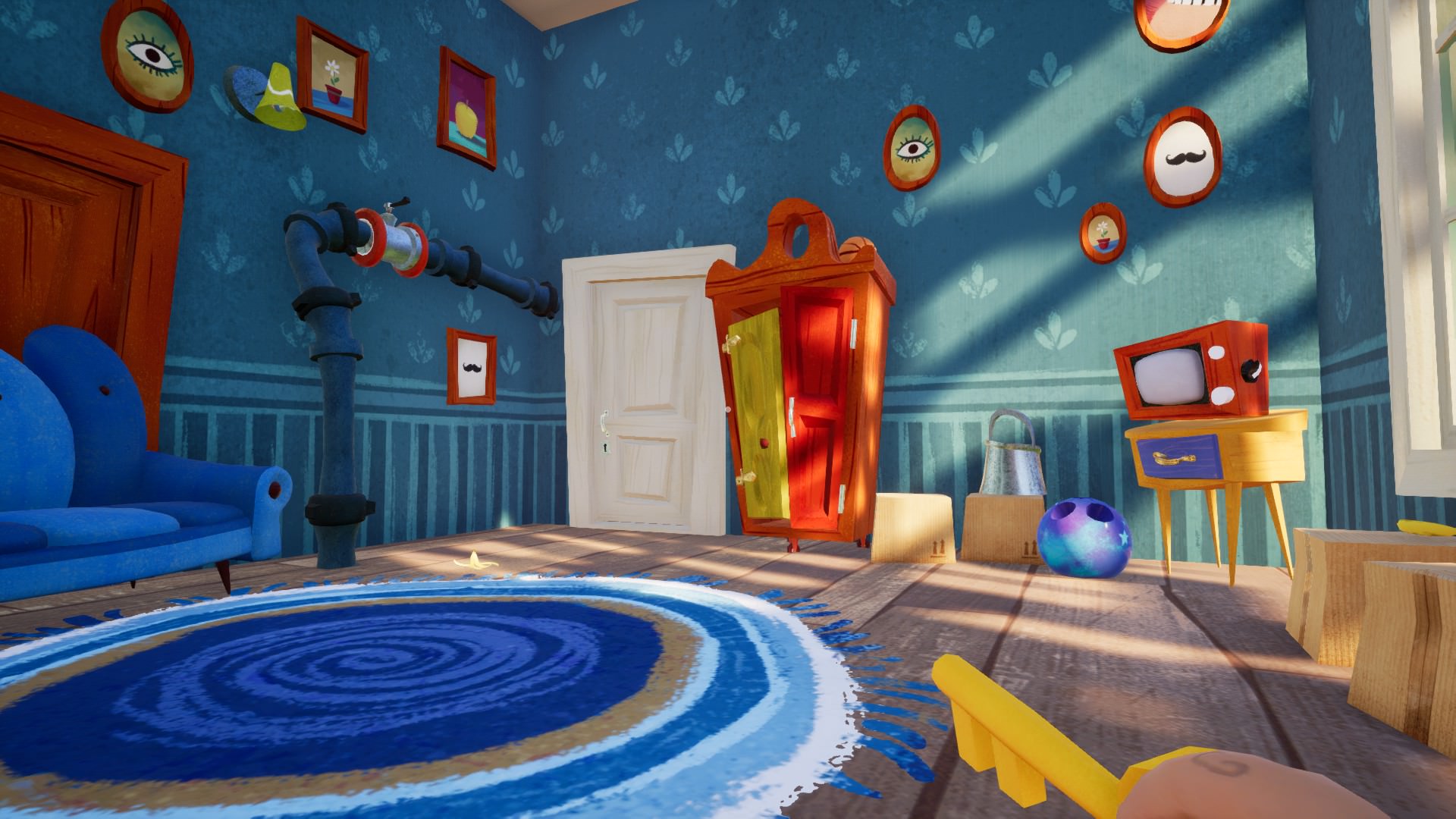 A maze of things to do

The third act is when the game starts to come together. A gigantic house surrounded by accessible rails is, in fact, a huge sandbox for the player to explore and play with. However, due to the absence of direction, it becomes difficult to figure out where to go to do what. And another issue is the confusing layout. Many rooms can only be accessed by having to climb/fall on the gigantic rooftop. It becomes hard to remember where is what, and if the player starts to move around important items then the mess can become diabolically annoying. I spent hours figuring out how to retrieve a simple key stuck to a room-sized magnet, only to realize that the key opened a door on the ground floor that I got used to bypass by breaking a window. I think that it’s good to have puzzles that are hard to solve, but there should have been a better balance and direction. Secrets can be hard to find, but it’s annoying not to be able to have the slightest idea on how to reach the basic items necessary for further exploration. Sometimes I would open an area through bugs and glitches rather than using the obscure way the developers had intended. 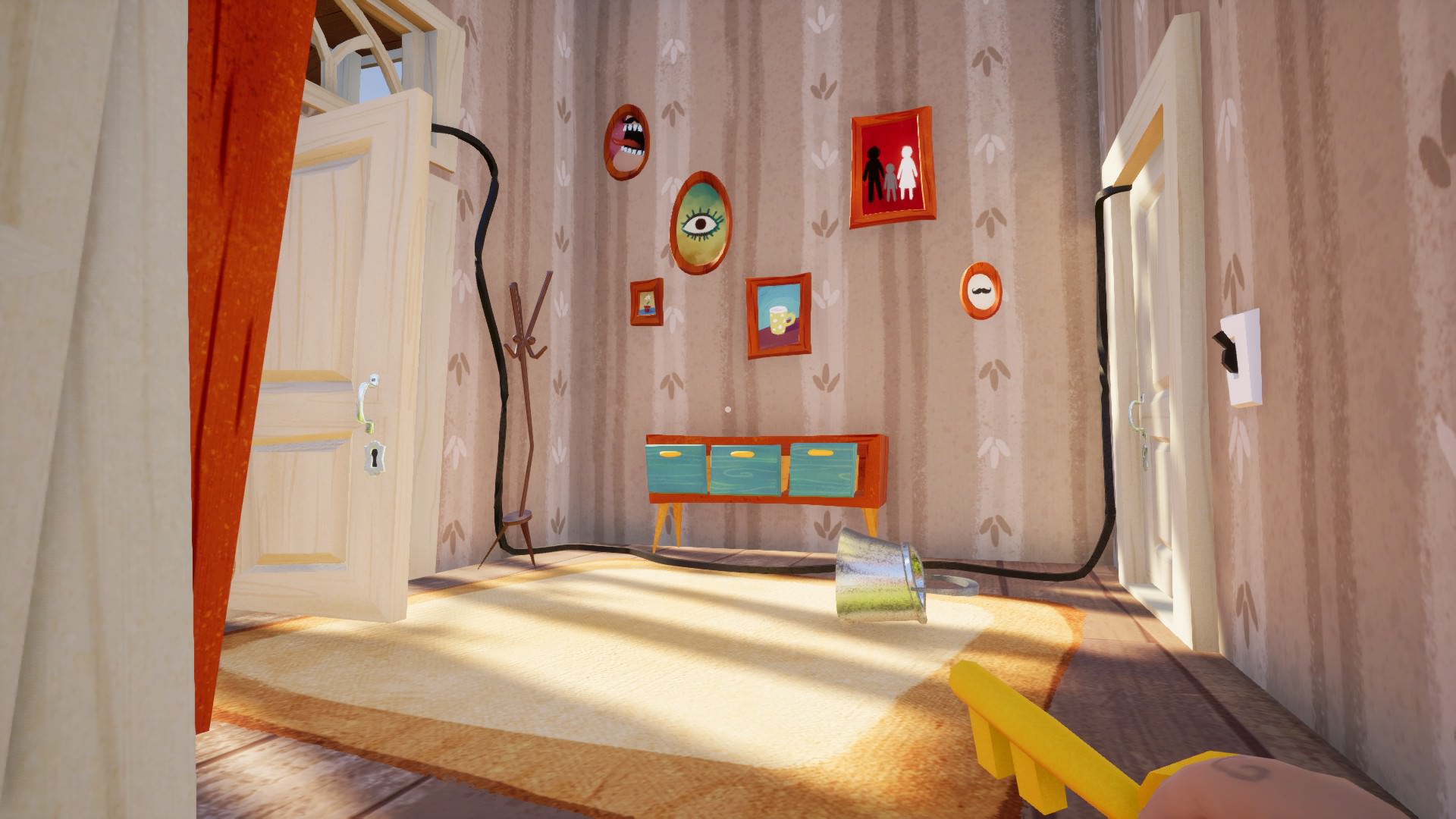 I completely understand the need for things not to be too easy, or the game would be too short, and most players would not stick around for the secrets. However, between the glitchy physics, the confusing puzzles, the unforgiving platforming, and the forced restarts when caught by the neighbor, I can’t say that most of my time with the game was enjoyable. Still, the feeling of exploration and the playground style of gameplay felt like an enriching experience then and now. However, what I enjoyed most were some short vignettes of nightmarish escape sequences with the mannequins during the third act. I don’t want to spoil them too much, so I will only say that they are both creepy and interesting puzzles to figure out. This was the game at its best, when it was focused rather than sprawling and when there was a specific direction rather than a vague sandbox that is still too constricted to be an enjoyable sandbox.

Technically, the game runs well but the loading times can be grating, especially when it comes to the nightmarish sequences. What was not very well done was that each time the player died during the third act, day time would change. Since there is absolutely no benefit to night time and blinding dusk light, I jumped the neighbor for a deadly hug so I could fast forward the time of the day. At least a dynamic light system would have solved this issue, by forcing the night but only making it temporary. But then the night really shows the problem of the game : trying to be scary/difficult, while this prevents players from figuring out the puzzles. Finally, it is not possible to rebind keys, which is simply not acceptable. 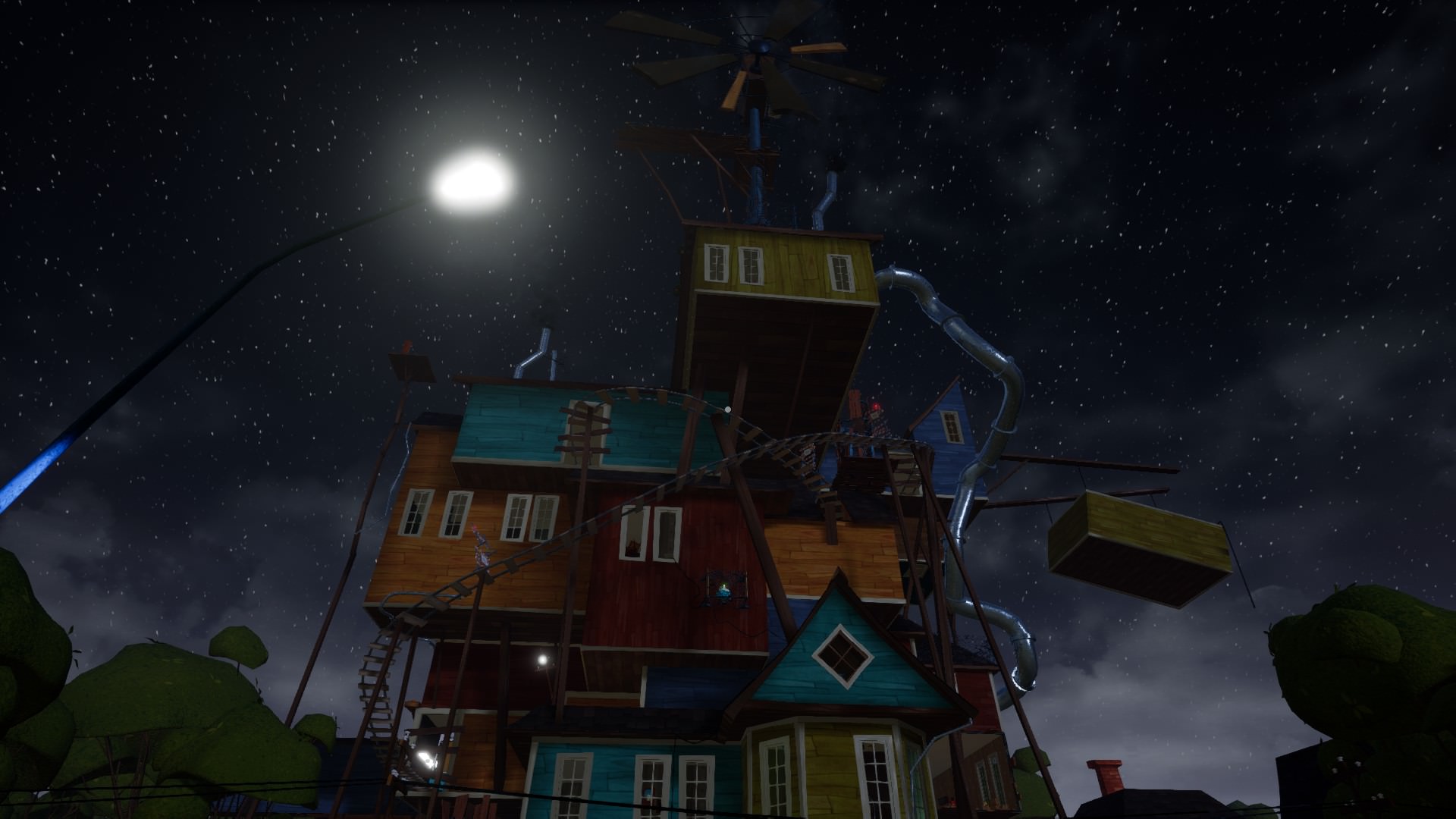 If you have read thus far you understand that I am very disappointed in Hello Neighbor and did not have a great time with it, especially considering the price of the game. This also reflects my feelings when I tried each new alpha, more and more dispirited by the game’s reliance on platforming and obscure puzzles. Still, despite my gripes and the bugs, I think that Hello Neighbor is a game worth experiencing due to its unique nature. As frustrating as it is, it brings something new to the table, and it has moments of brilliance.