The Scrungeon Depths is a real-time dungeon crawl with rogue-like elements, which leaves you wading through piles of pixel-graphic bodies as you try to dodge vicious monsters and game-breaking bugs.

[ Please note: we played this game a couple of days before release. The dev has said that the game-breaking bugs mentioned in this article were fixed by the time the game was released ]

The Scrungeon Depths is a fast-moving action dungeon crawler with rogue-like elements, and the debut title from indie developers, When’s Lunch? Games.

You play a little pixelated dude. The game begins as you are dropped into a room with some old furniture and a stone staircase leading downwards. Dusting yourself off, you wander about the room and collect the weapon, helmet, and armor that some thoughtful person has left you, and maybe browse the bestiary sitting in the far corner. Not having anything else to do, you venture down the stairs.

The Scrungeon Depths follows along with many other recent action dungeon crawlers and renders everything in large pixel graphics. These aren’t the best I’ve seen — they look pretty blocky in full-screen HD resolutions and picking out objects or enemies is often difficult given the organic ‘litter’ that quickly covers the dungeon floors — but they’re also not the worst. They do a reasonable job. 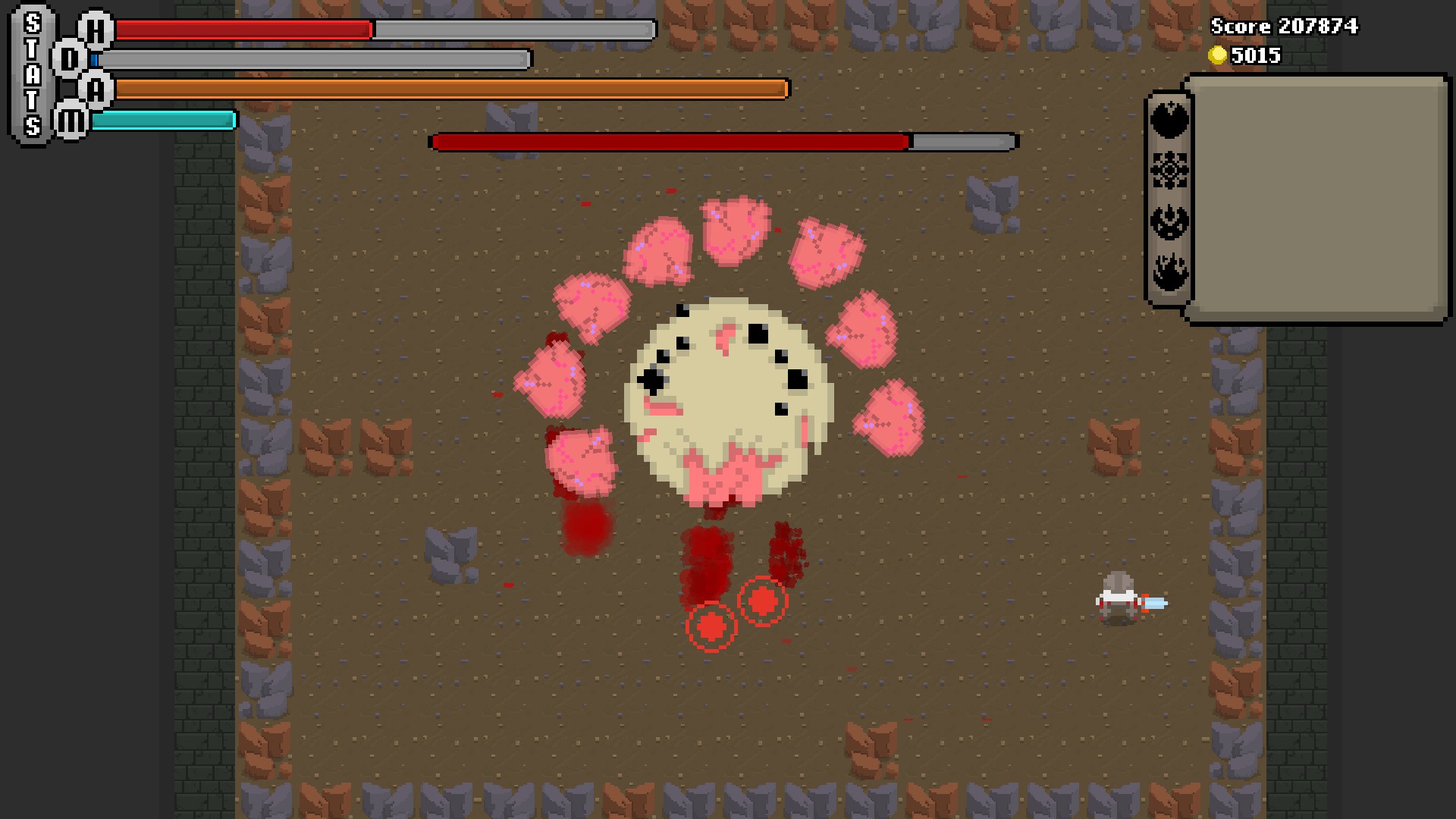 The game is played from a top-down view, with character sprites drawn side-on, which is common for the genre. The protagonist graphic changes depending on equipment, which is a nice touch. There’s not a whole lot of enemy variation — I think the bestiary has 11 enemies, with two reskin-style variations — but each enemy type is easily identifiable. There are four (I think) dungeon types, each with 10 levels, and each tile set has a distinct flavor to it. The enemies mostly stay the same between levels.

The music is surprising. It’s mostly guitars and has a sort of eastern feel to it. It’s not at all what I expected, but it works very well for the game and I really enjoyed it. There are a few different tracks, but they all have a very similar feel.

Sound effects are fairly weak, with explosions sounding distorted even at low volume. There’s a single voice actor, but he only seems to be there to announce combo ratings. Mostly he sounds pretty good, though.

There are only the standard Unity launcher graphics options: a single-detail-level setting, from Fastest to Fantastic, a resolution drop-down, and a full screen / windowed mode toggle. The game suffers from some performance issues when a lot is going on; I think it’s more the animations than the dead bodies slowing it down, as once you’ve killed everything it speeds up again, but it did surprise me a bit.

The Scrungeon Depths is a real-time action dungeon crawler. It’s sort of like a simplified cross between Dungeon Souls and The Binding of Isaac, though it doesn’t have the same depth as either game.

There are no character classes, levels, skills, or anything like that. Instead, you have four equipment slots — weapon, helmet, armor, and relic — and four attributes — health, attack, defense, and speed — and you rely on lucky item drops to increase your stats, one of each equipment type. As well as the items that can be equipped there are also some drops that provide you Binding-of-Isaac-like abilities, such as robot eyes that blast your enemies and devil balls (!) that rotate around you, causing damage to anything they hit. When you find these it’s not immediately clear whether they’ll replace your currently equipped relic or not, but after a bit of experimentation you find out what works and what doesn’t. 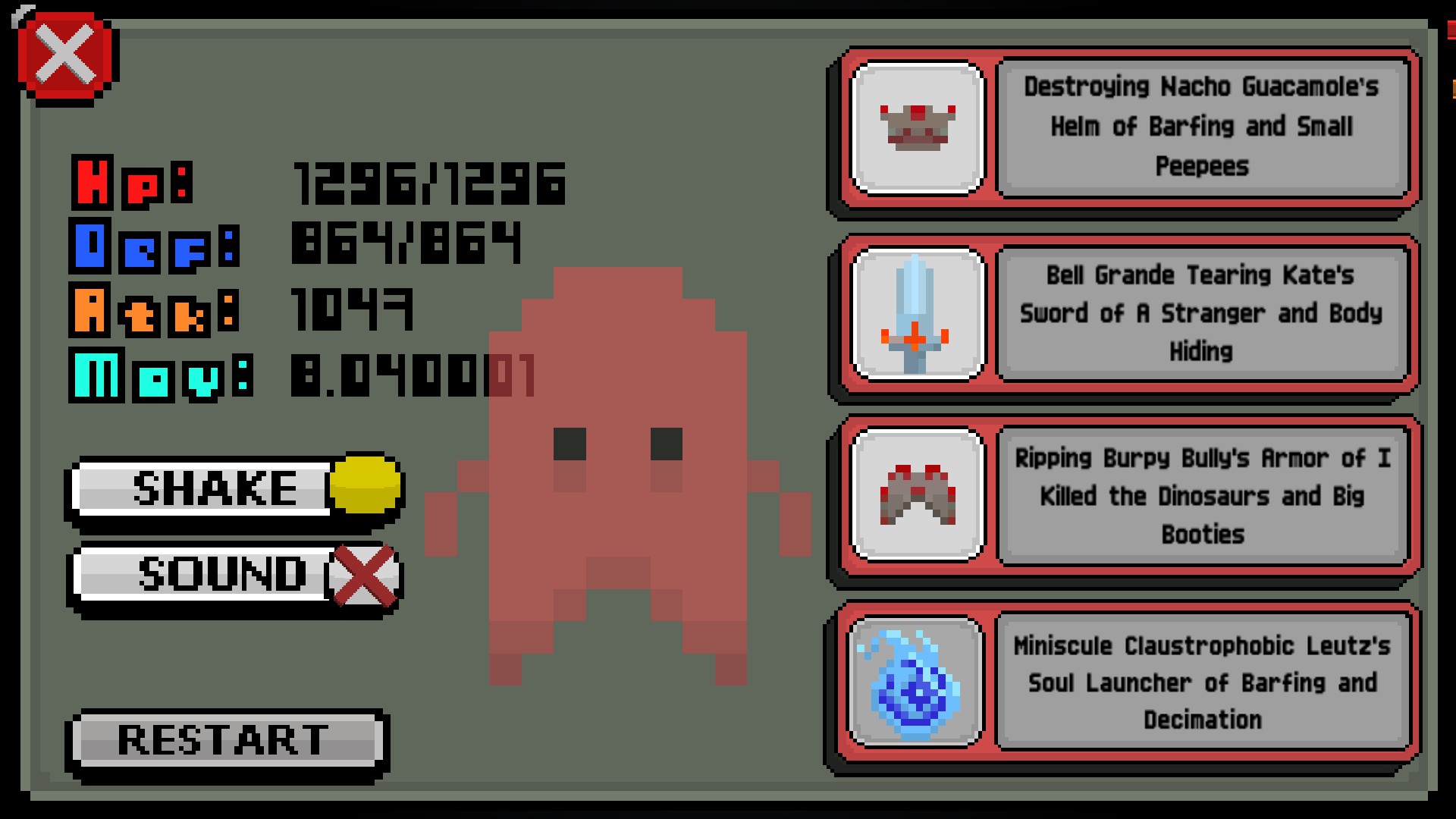 Combat is in real time and enemies seem to know where you are implicitly, regardless of walls or other obstructions. Each level includes a number of Gauntlet-style ‘nests’, which infinitely spawn enemies of a particular type. Once you’ve destroyed all the nests on a level the exit materializes next to you with a large explosion. Pro Tip: if there are bombs about make sure that you move out of their range — I’ve been killed by them. The game’s gimmick is that, when they die, enemies’ bodies remain on screen and become physics objects, getting in your way and slowing you down. This works well and makes for some darkly funny scenes of your little pixel guy wading through dead monsters. After you’ve died a couple of times from being slowed down that way, you’ll be much better at accommodating it. There’s also a combo meter that increases with each enemy kill and resets when the timer expires without you killing anything. I haven’t worked out if this has any in-game effect or if it’s simply for bragging rights.

Loot is procedurally generated in the rogue-like style, but it has crazy names. You’ll see references to genitals and other body parts as well as foodstuffs and other oddities. I think the highlight of my gameplay might have been “Ripping Farty Vagina’s Sword of Burping”, but it’s hard to say for sure. 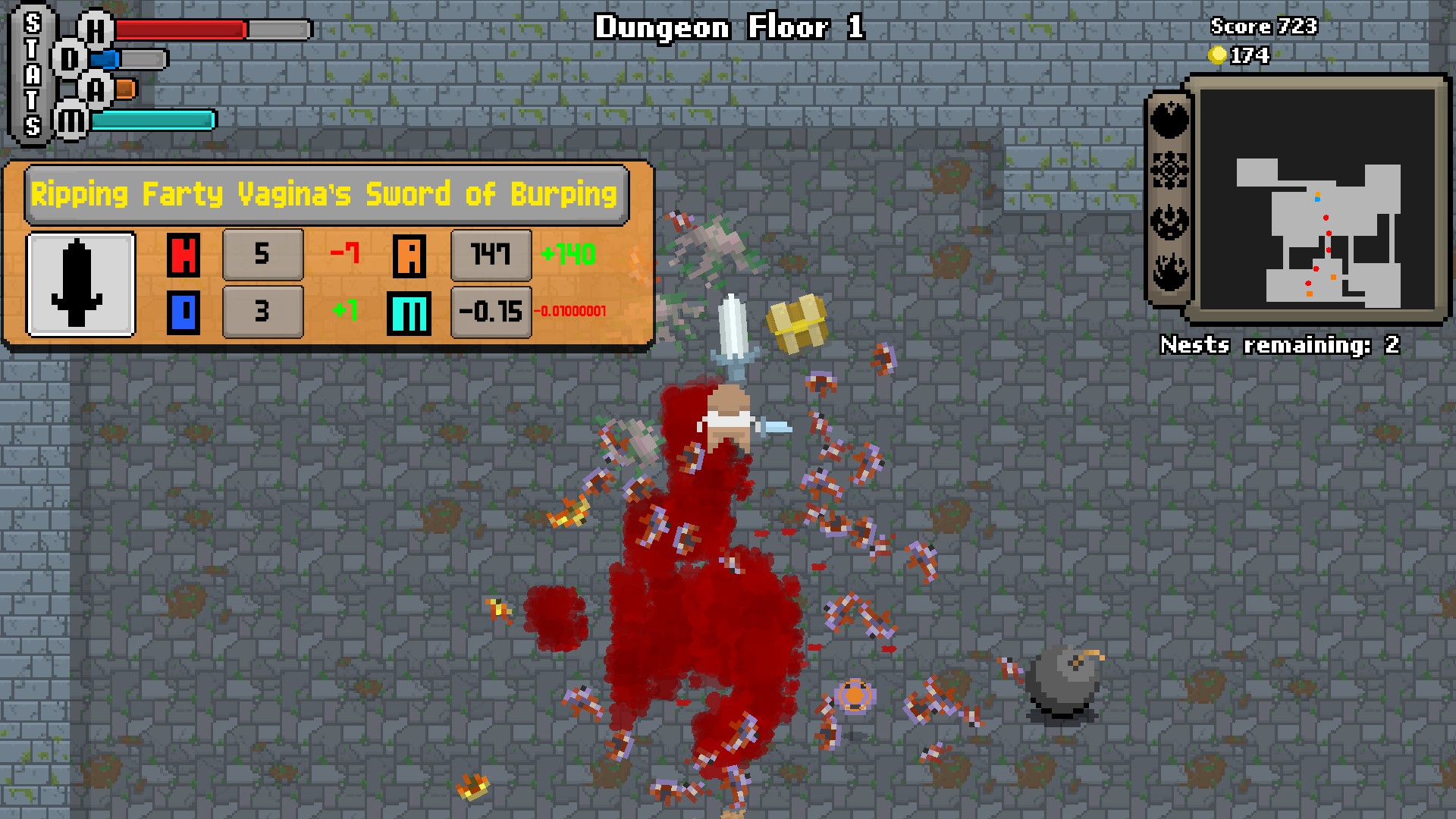 Unfortunately the items all become very samey after a short time, as they all simply adjust your basic attributes, with no other abilities or modifiers, so you just end up comparing stats and picking the higher numbers. There is permanent improvement available from shops by purchasing attribute increases with gold, but other than that each game plays essentially the same as the last, albeit on a different procedurally generated map. 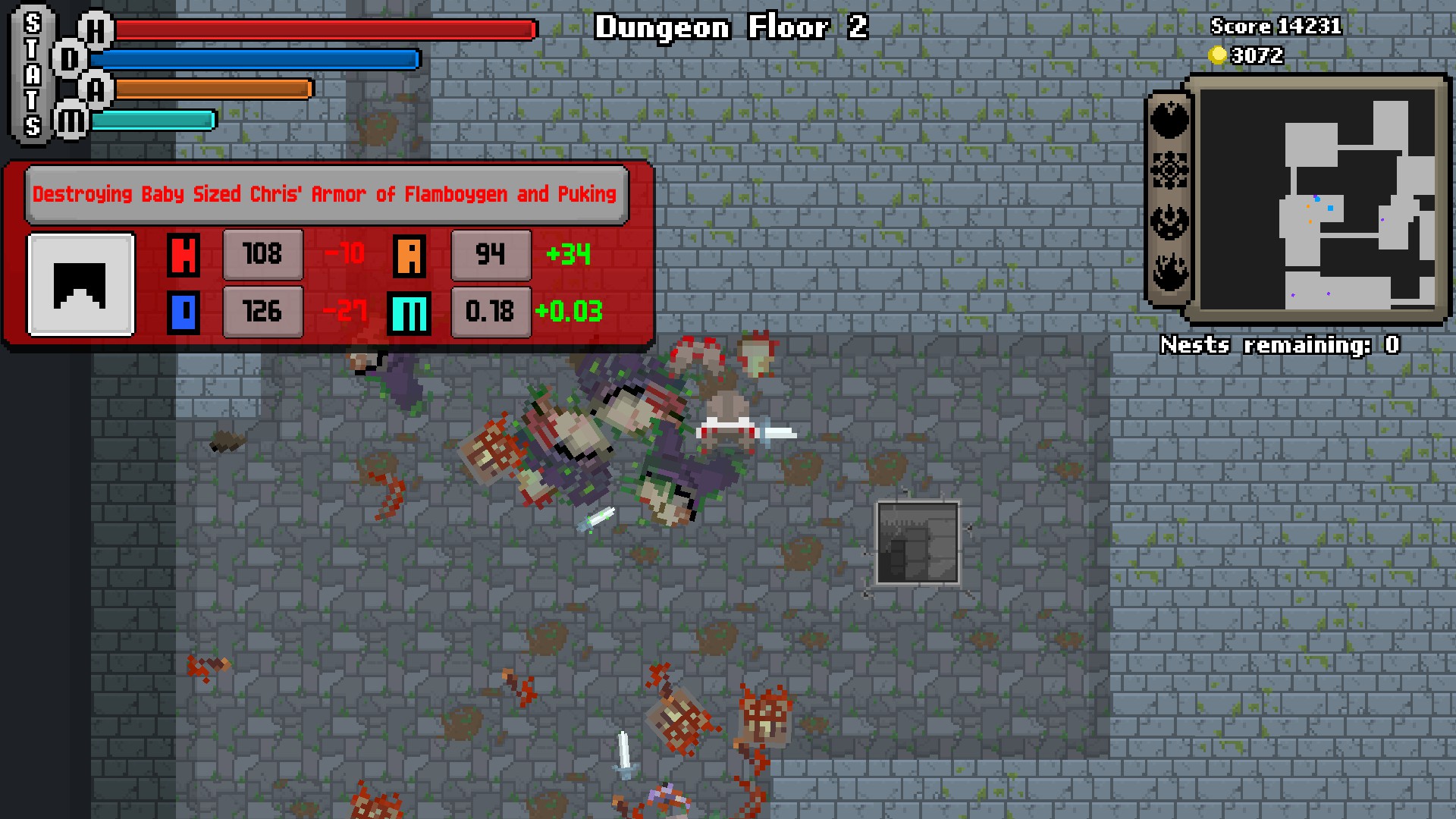 And that’s basically it. There are no ranged weapons save for the automatically-firing relics/items, and there are only a dozen or so enemy types, including some reskins, as well as a boss monster at the end of each level. Defeating the bosses grants you a special ability, but I don’t normally bother with them until I’ve killed the third boss and gained the healing ability.

Keyboard and gamepad controls are both a bit annoying, requiring the use of a mouse to navigate menu screens, but the undocumented keyboard and mouse mode, using the LMB for attack and RMB for picking up items works better than the other options.

The game has a few big problems. First, it seems to be buggy in the worst possible way: waiting until you’re near the end of a great run and then exhibiting a game-breaking bug. In my case, I completed Level 36 and the game loaded up a blank level: no enemies, no walls, no floor, no exit. All I could do was quit. I haven’t bothered playing again since then. I’ve noticed another video in the Steam Discussions for the game that shows a level with an unreachable exit. These bugs need to be fixed. 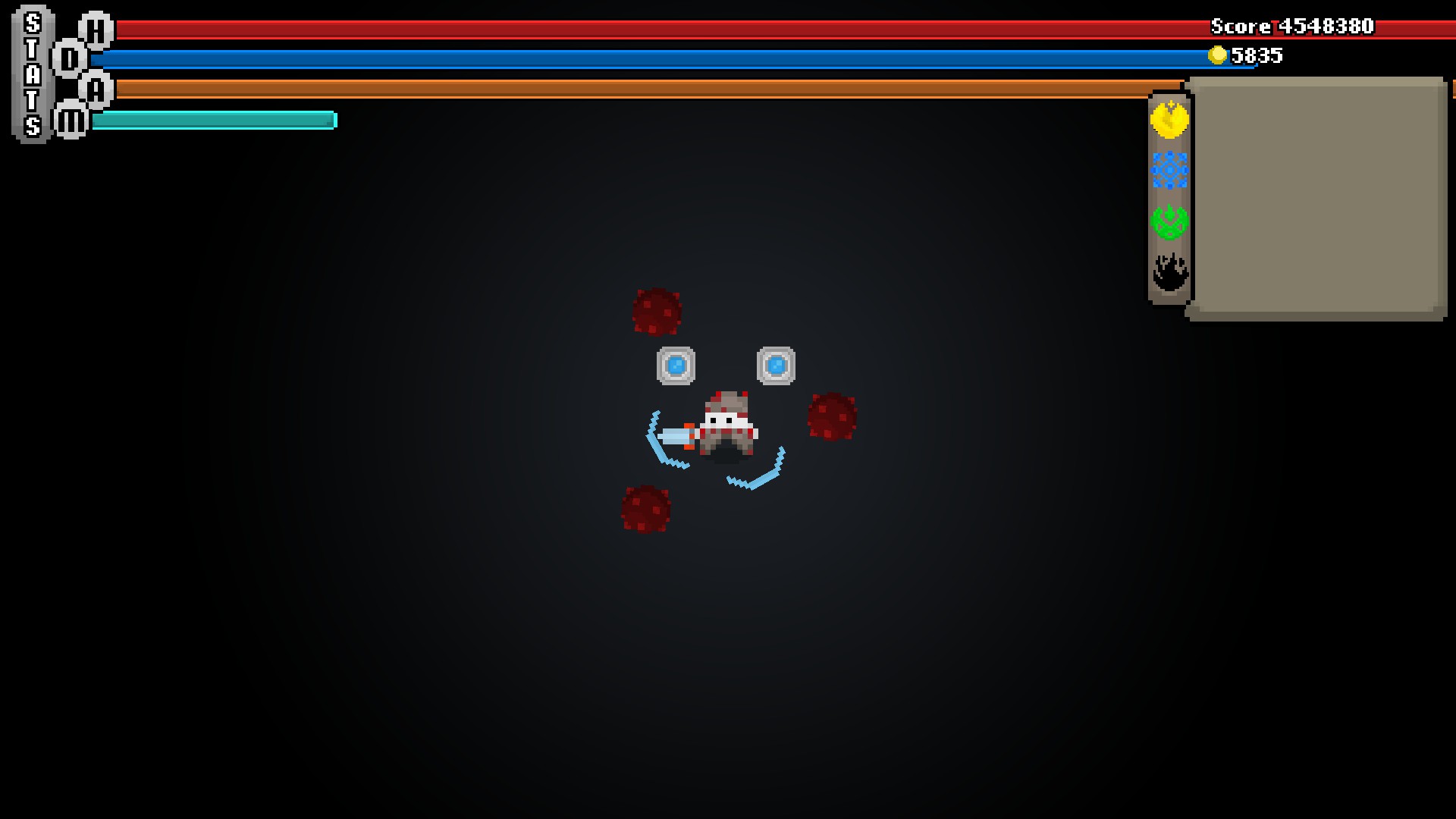 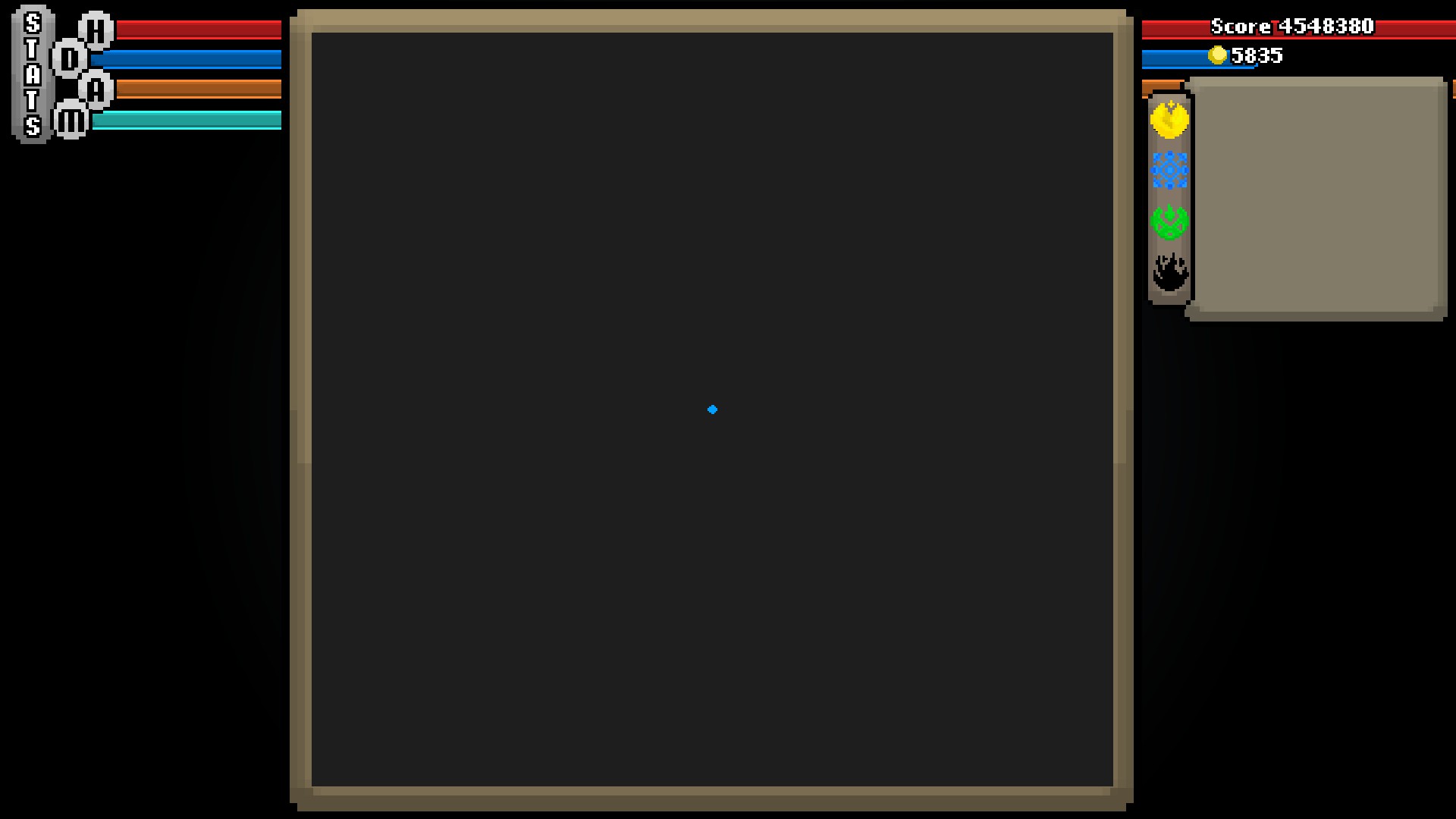 There also seems to be no way to quit; I had to alt-tab each time and kill it from the taskbar. And it gets very repetitive very quickly. With limited enemy types and items that only add to your base attributes or provide one of very few benefits, each game ends up playing out like the last, regardless of the procedural generation. You very quickly find the best items you’re going to find, and choose your relic to best suit your play style, and after that it’s just grinding through the levels one after another, fighting the same enemies over and over, until you stuff up or you get bored — or the game breaks.

Dungeon crawlers with rogue-like elements are some of my favorite games. In fact, add rogue-like elements to pretty much anything and I’m in. But even procedural level and loot generation can’t hide the fact that The Scrungeon Depths needs more content, and it needs to have its game-breaking bugs fixed.

If, like me, you love this sort of game, then keep your eye on it; watch the news, read the forums, and wait to see if it improves. But as it stands right now, I’m very sorry to say that I can’t recommend it. 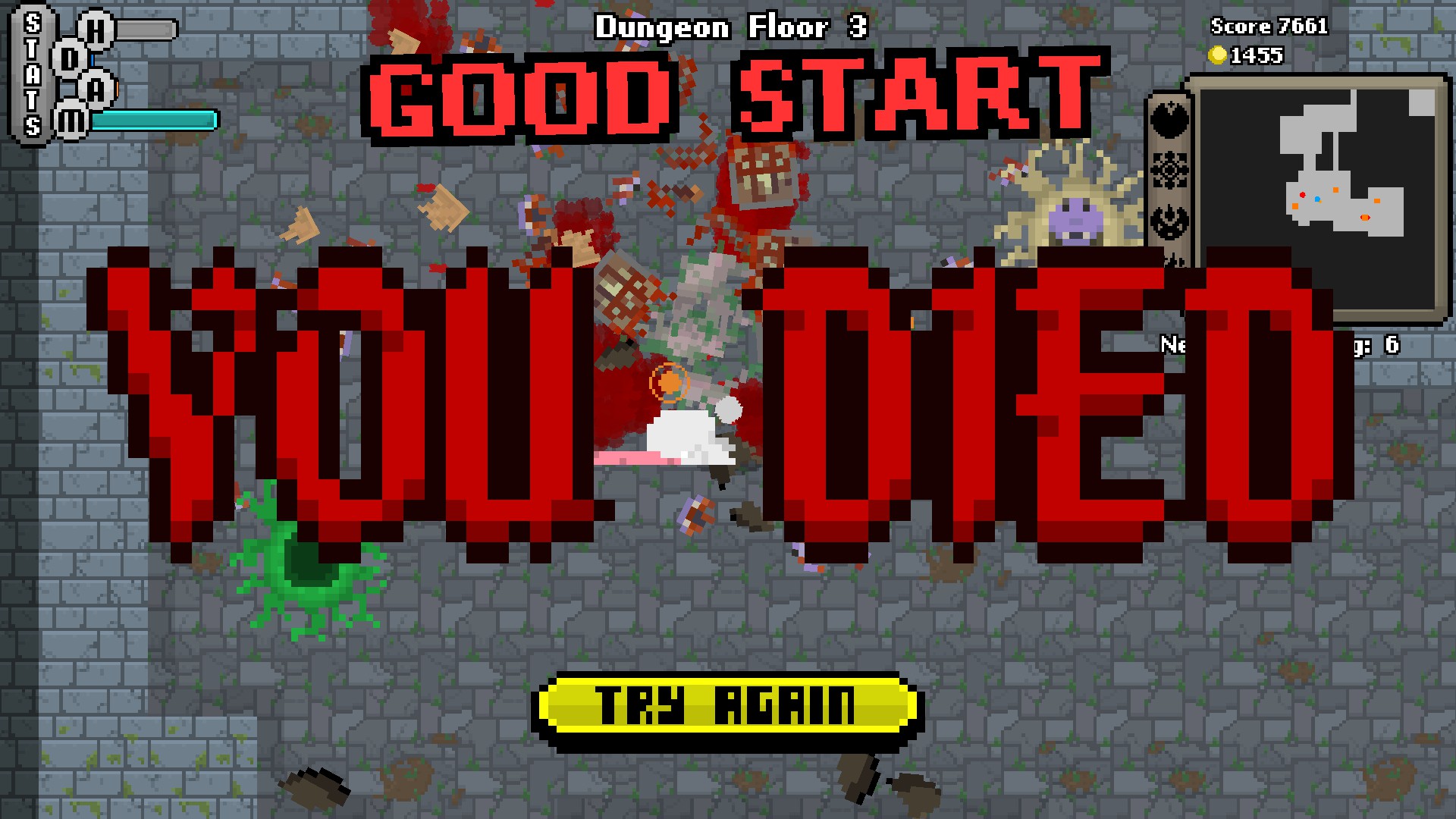