The game promises much, but delivers precious little at this point. This is one to watch and bookmark for when those promises become more than just promises.

I’ll keep this as straightforward as I can because I feel doing a deep dive on a moving target is a waste of time, the game will likely change quite significantly (for the better I hope) in the coming months. As it stands, Sociable Soccer right now is only worth your money if you intend to support the developer in their efforts to make Sociable Soccer a better game. It is not, and I highlight this with big bright pink crayon, not something you’ll get a great deal out of right now in the current Early Access state. The game engine works, you can play games of soccer with it, and that’s really about it. Most of the modes are very perfunctory and shallow, and the game engine itself is also very much a work in progress. 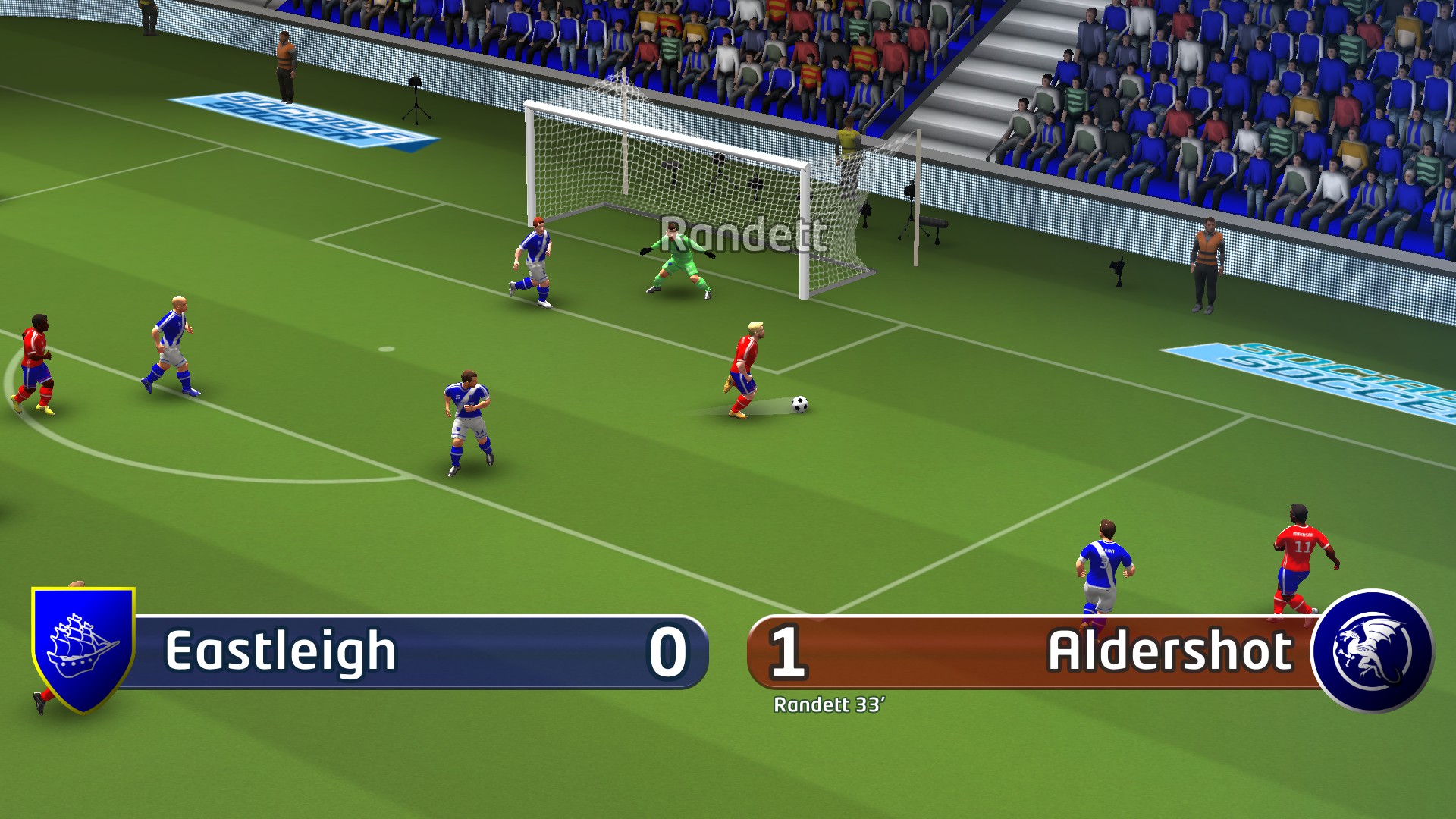 This is probably the best look for it right now, the post-goal replays, and even that doesn’t exactly give you much to go on. The models are pretty low detail, the pitch is flat green stripes and you can count the crowd polys in the low double digits. It moves like butter even on really low-end devices, so there’s no risk of it not running well even on a beige box from the 90’s. As a budget soccer game, this will likely fill a very nice slot, especially if they can get the singleplayer modes to actually be something more than the pretty sterile mess they are at present.

The sound is simple, but it works, despite the theme tune possibly being enough to make you reach for the mute button in record time (it’s one tune, and it’s annoying in a cheesy and catchy kinda way), everything else is fairly generic thuds and crowd cheers. No commentary (to be expected) and everything else is displayed in text. In terms of gameplay, well, it’s no FIFA or PES, there’s no fancy footwork here, you’ve buttons for kick, hoof, pass, chip, and buttons for tackle and press and change player and that’s kinda it. You basically charge after the player with the ball and get it off of him by any means necessary or if you’re the ball holder, you whack it upfield and get it to a striker and then wang it towards the goal. 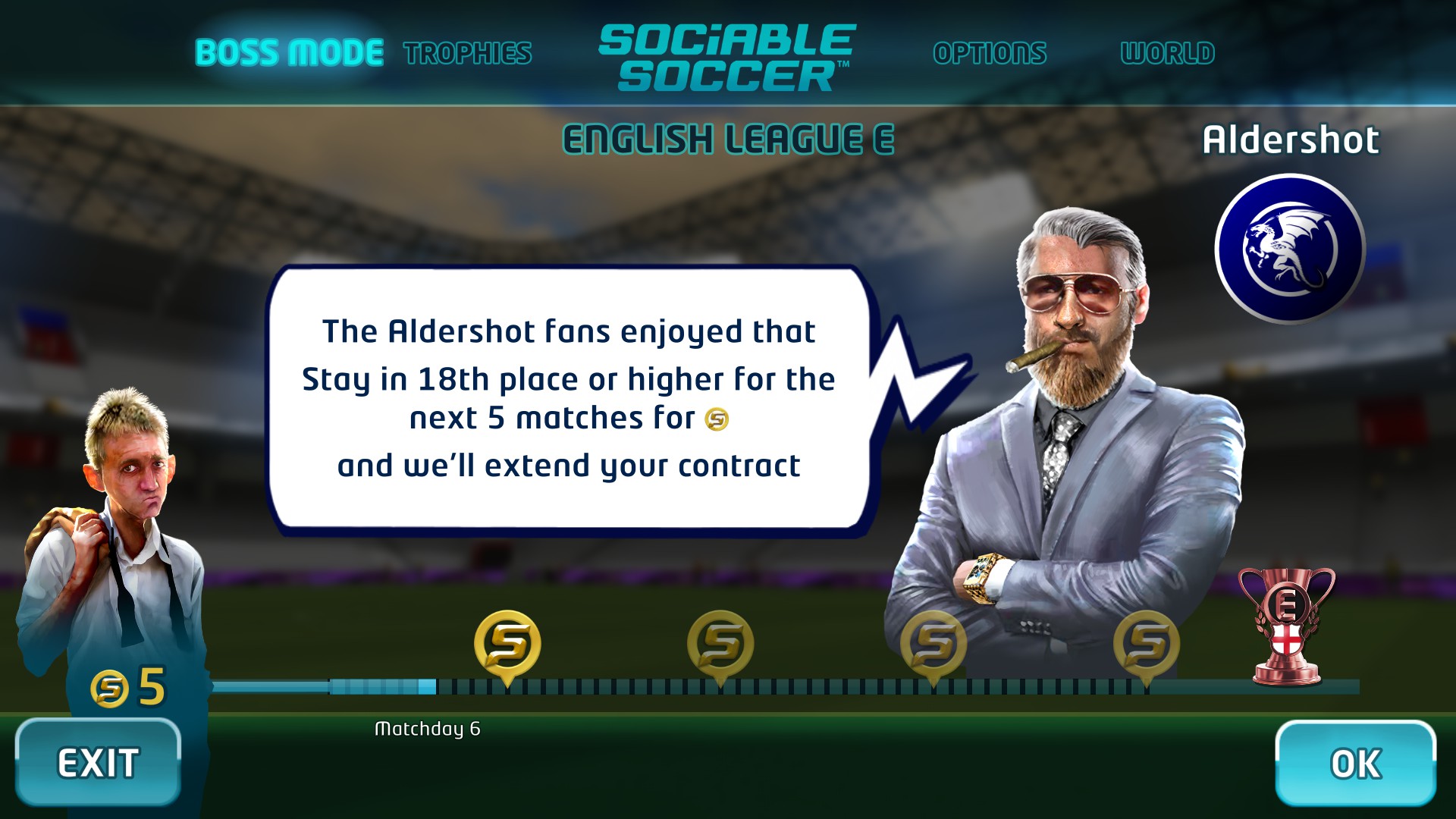 Game modes are equally simple, Boss Mode has you take on a team for a full season, with progressively tougher goals over the course of the season, pass and you become a “better” manager and can manage better teams, fail and you’ll have to start over, other modes are variations on that flavour, and without the ability to transfer or improve your team at this point it’s very, very sterile and missing much-needed depth. This is something that needs urgent work on (along with goalie AI) over the next few months. 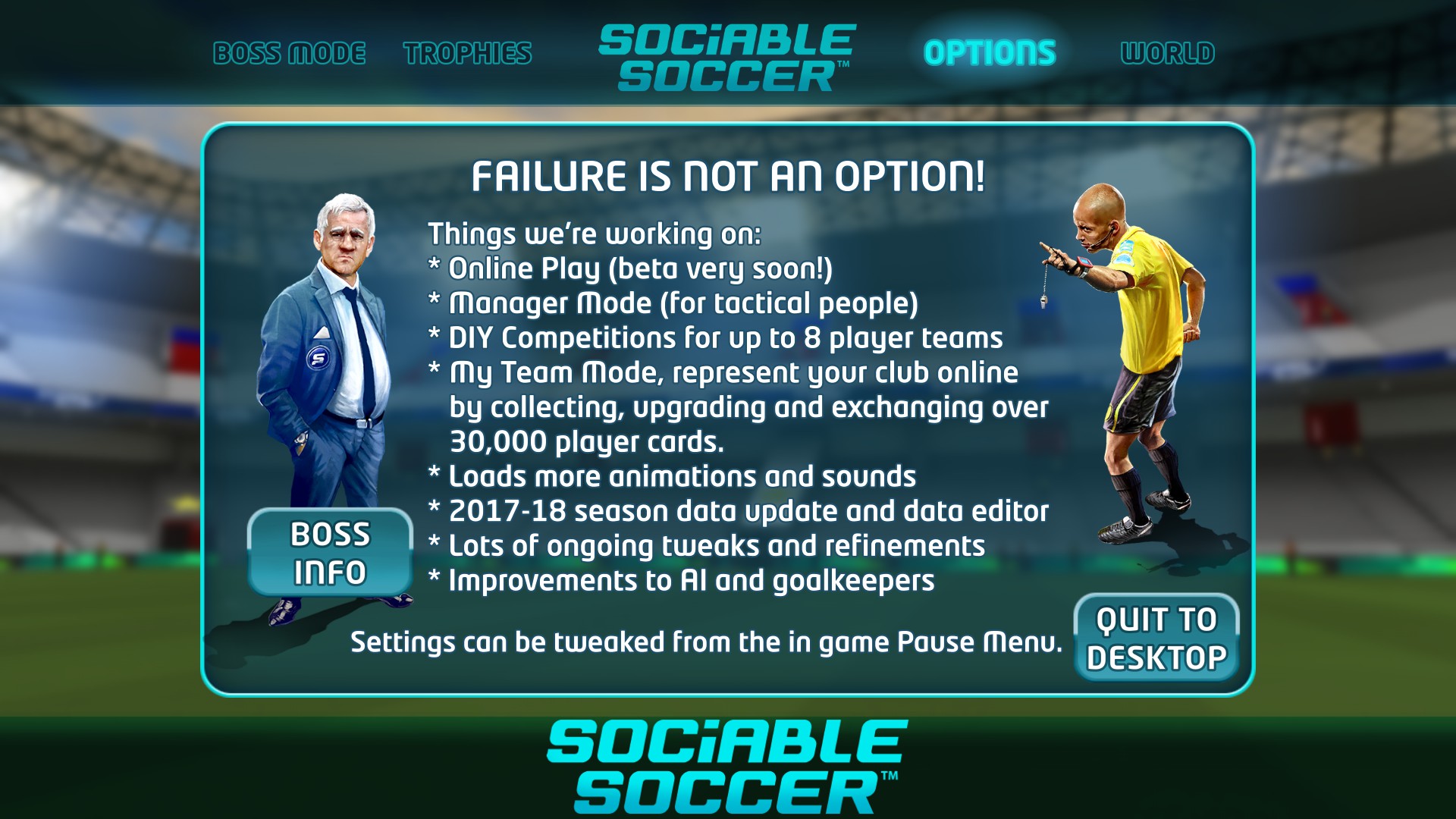 Perhaps come Christmas, this game will be much closer to the Sensible Soccer ancestor it’s trying to be. We shall see.