Neighboring Islands is an adult-oriented pirate-themed visual novel. Can you navigate the rocky waters and even rockier English to reach the abrupt conclusion?

Neighboring Islands is a pirate-themed visual novel from indie developers, BAD Team (Blue Angry Dog Team) which tells the story of the crew of the Siren Santy, a pirate ship plying its violent trade in the Spanish Caribbean waters in the early 18th Century. The game begins with the then-unnamed protagonist locked in the ship’s hold, the last remaining of a group of prisoners. He’s weak from hunger, thirst, and exhaustion, as well as torture and beatings. The other prisoners, it seems, have already been dealt with by keelhauling, and the protagonist knows that his fate will be even worse: left defenseless and alone with nothing on a deserted island in the middle of the ocean.

Neighboring Islands uses the Ren’Py Engine and a fairly traditional visual novel style throughout, with posed characters and portraits overlaid on mostly still painted backgrounds. The story and dialog are displayed in a semi-transparent text box towards the bottom of the screen. 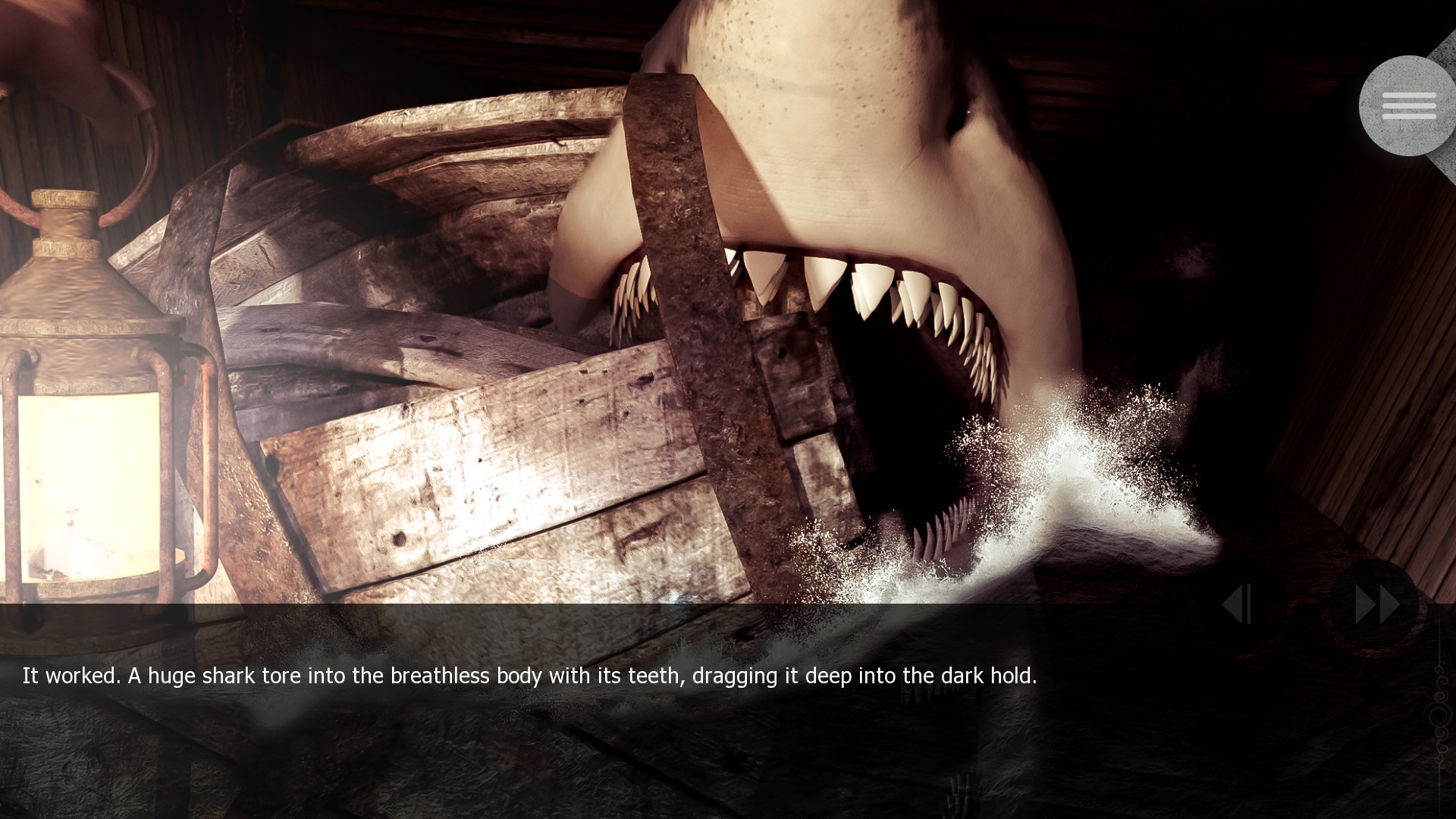 It diverges from most other VNs in the style of the graphics, though, with characters and some foreground objects being posed and pre-rendered — some even including animations — giving the game a much more three-dimensional appearance. For the most part, this looks pretty good, but character expressions are few in number, and many of them look somewhat comical. Some scenes are too dark, with the details hard to discern.

The developers have added a large on-screen button to access the menu, which is unnecessary and obtrusive. A standard small button on the main text box or even no button at all would be preferable. The little pop-up windows explaining certain piratical terms are okay and might be useful for someone completely unfamiliar with them, but they seem unnecessary in my opinion. I found the title screen quite ugly, too; the black-and-white skull sketch part just looks out of place with the rendered part.

Typical of the genre, there are no graphics options beyond full screen / windowed mode.

The music has quite a large range of instrumental tracks and at least one with vocals: a haunting melody in the opening scene. The title music has a sort of dark, pirate feel to it. I noticed one very out-of-place track at the start of Chapter 2, but other than that the music was well chosen to complement the scenes of the story. 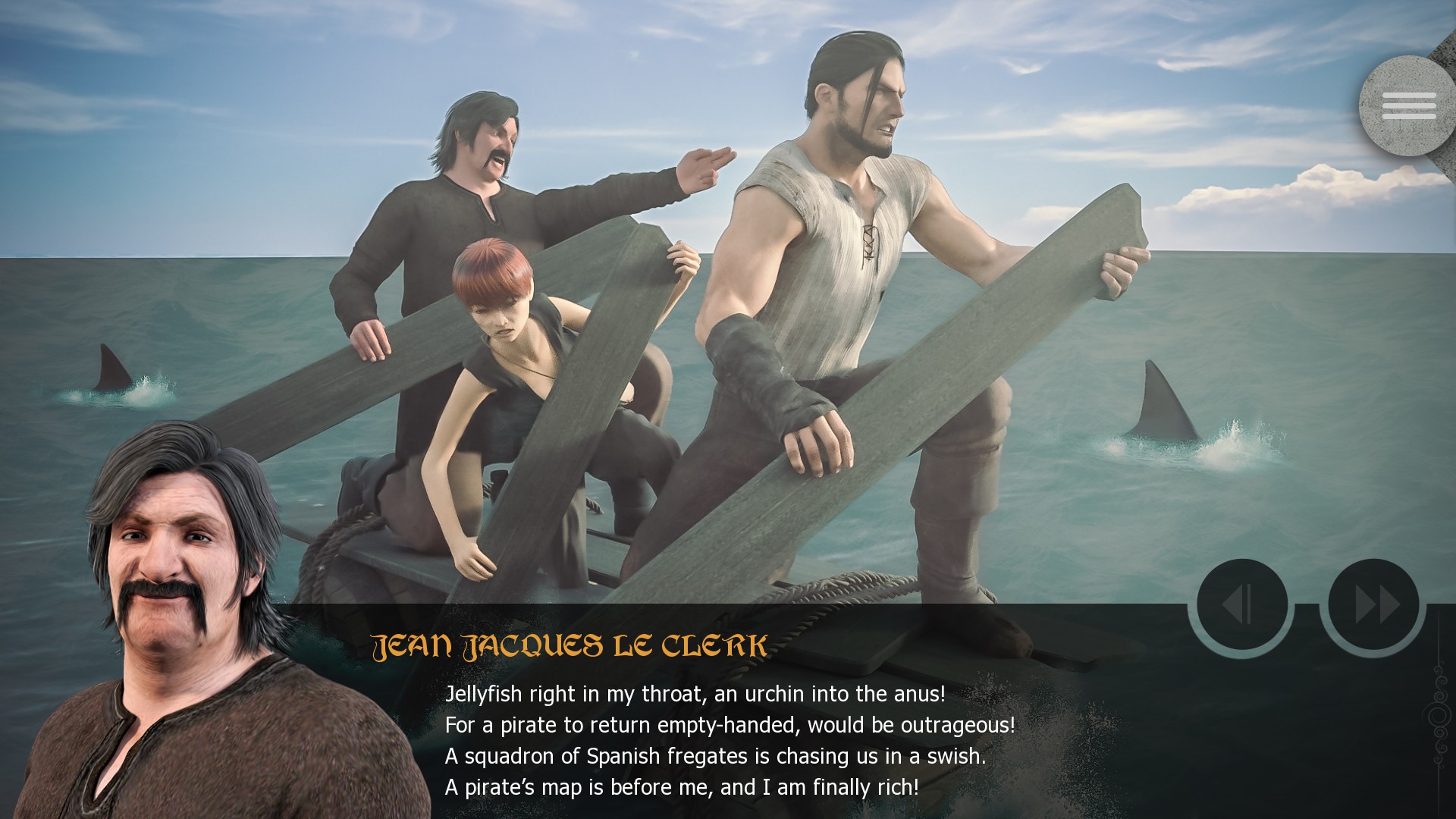 As with most VNs, the sound effects are limited to the occasional scene-setting sounds played at certain key points in the story. They’re appropriate and well-made, but somehow still seem out of place at times, probably just because of their rarity.

There are no voices, which is a bit of shame. 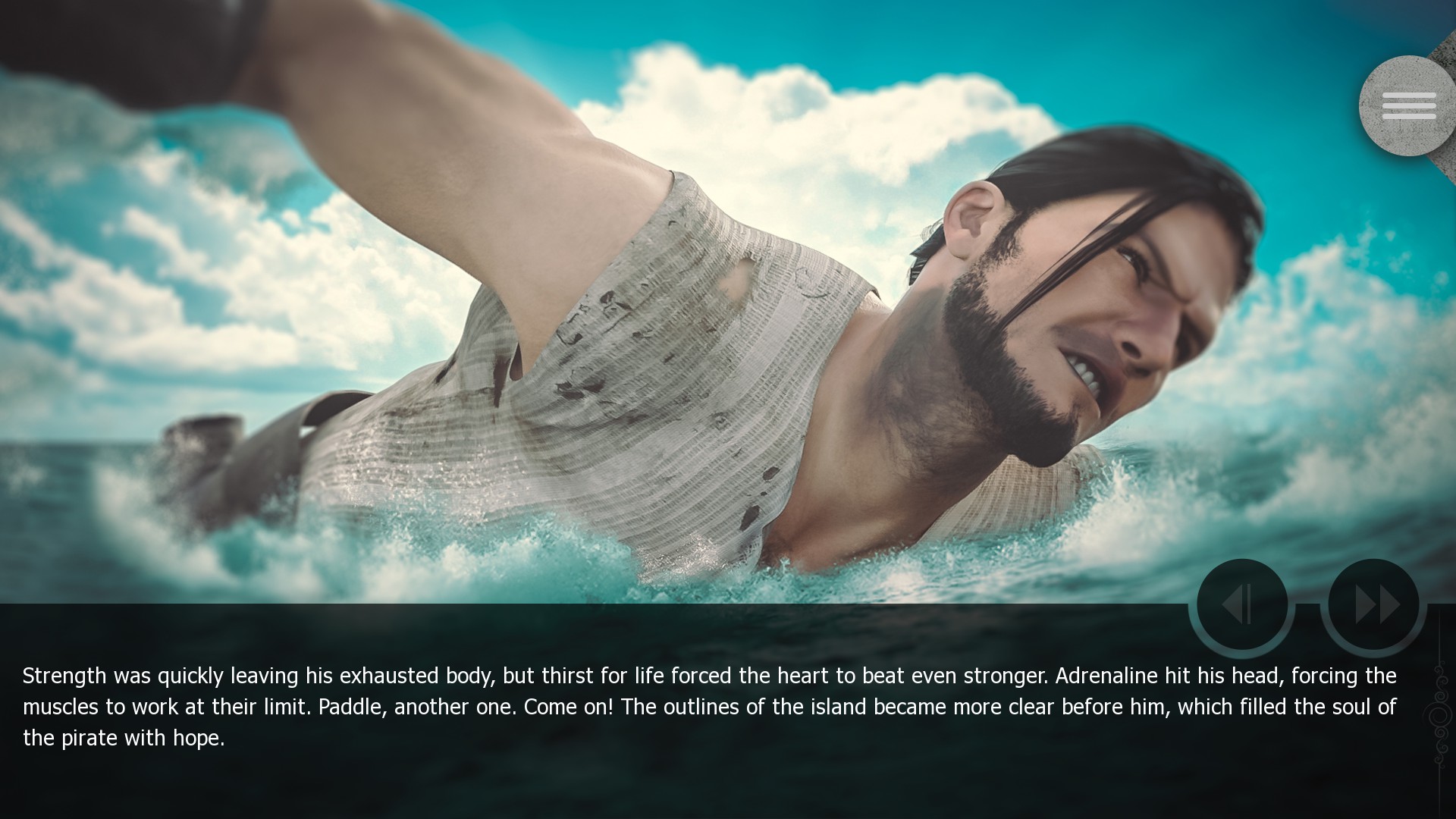 Neighboring Islands doesn’t diverge from the tried-and-tested VN formula used by almost every game in the genre. Visual Novels are a blend of two types of media: visual art and writing. To my mind, for a VN to be good overall, it really needs to have good visuals and good writing. I’ve discussed the visuals already; though perhaps an unusual choice for the genre, the combination of pre-rendered 3D, small animations, and drawn backgrounds actually works quite well. So what about the writing? In short, it’s terrible. Simply awful. Cringeworthy, even.

“Viscous half-darkness wraps over most of the room. Dust dances in rare rays of dim light, somehow filling the premises with resemblance of life. Grated door encloses this uncapacious place …” And it gets worse. The story seems to have been very poorly translated from Russian and is desperately in need of a professional editor. It reads like something written by a pretentious, but illiterate, English major, who copied down a whole lot of fancy-sounding words and approximate meanings, but doesn’t know how to string them together properly. Or perhaps it began life as a machine translation, and someone has had a go at fixing it. In any case, there are a lot of big words that don’t quite fit, the tense is all over the place, there are incorrect punctuation and spelling errors, and so on. The grammar is really very bad. I can normally see what the writer was trying to say, but it’s genuinely sad to see it jumbled so badly. 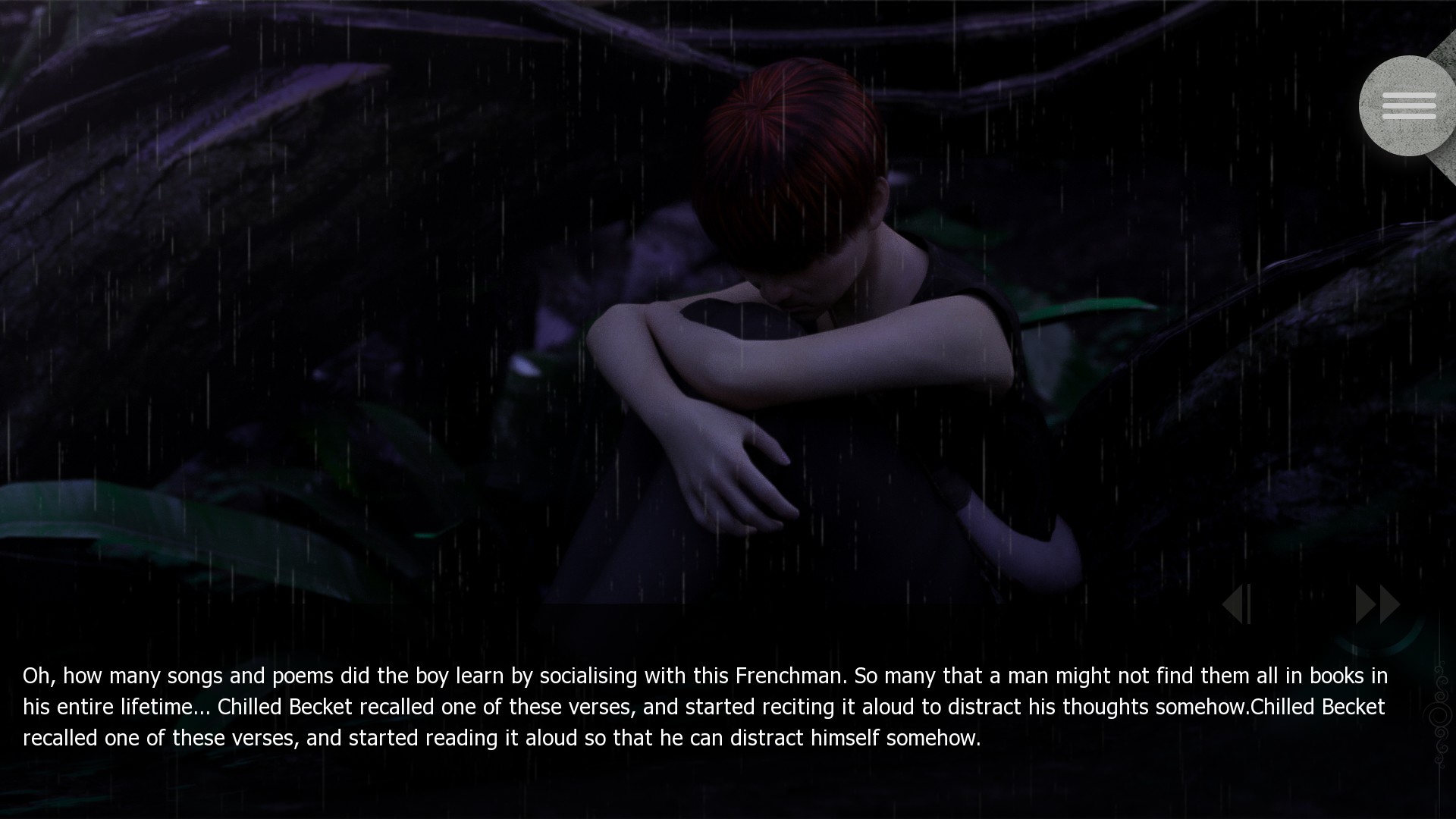 I will say, though, that I grew more attuned to it as I read. I suspect the writing might have improved ever so slightly, but I think I also became more versed at plucking out the important details from the Pidgin English text.

Some choices are included, but the non-linearity introduced by these choices is almost always short-lived, with most ending up with the protagonist dead and a new achievement awarded, or simply moving the story along the same route, usually with only minor temporary flavor differences. While the death scenes are sometimes amusing, the game really only offers the illusion of choice from most of its decision points.

The game has adult themes running throughout, including violence, gore, sexual themes, and even a little bit of nudity, but for the most part, these themes are part of the story, rather than being merely gratuitous.

Finally, the story is currently unfinished. There are two chapters and the end of the second chapter is quite sudden, the game finishing with “To be continued”. The third chapter was announced in June and work is ongoing; I’d expect it to be a free update for owners of the current game since that’s how the second chapter was released, but I haven’t seen any official announcements that confirm this. 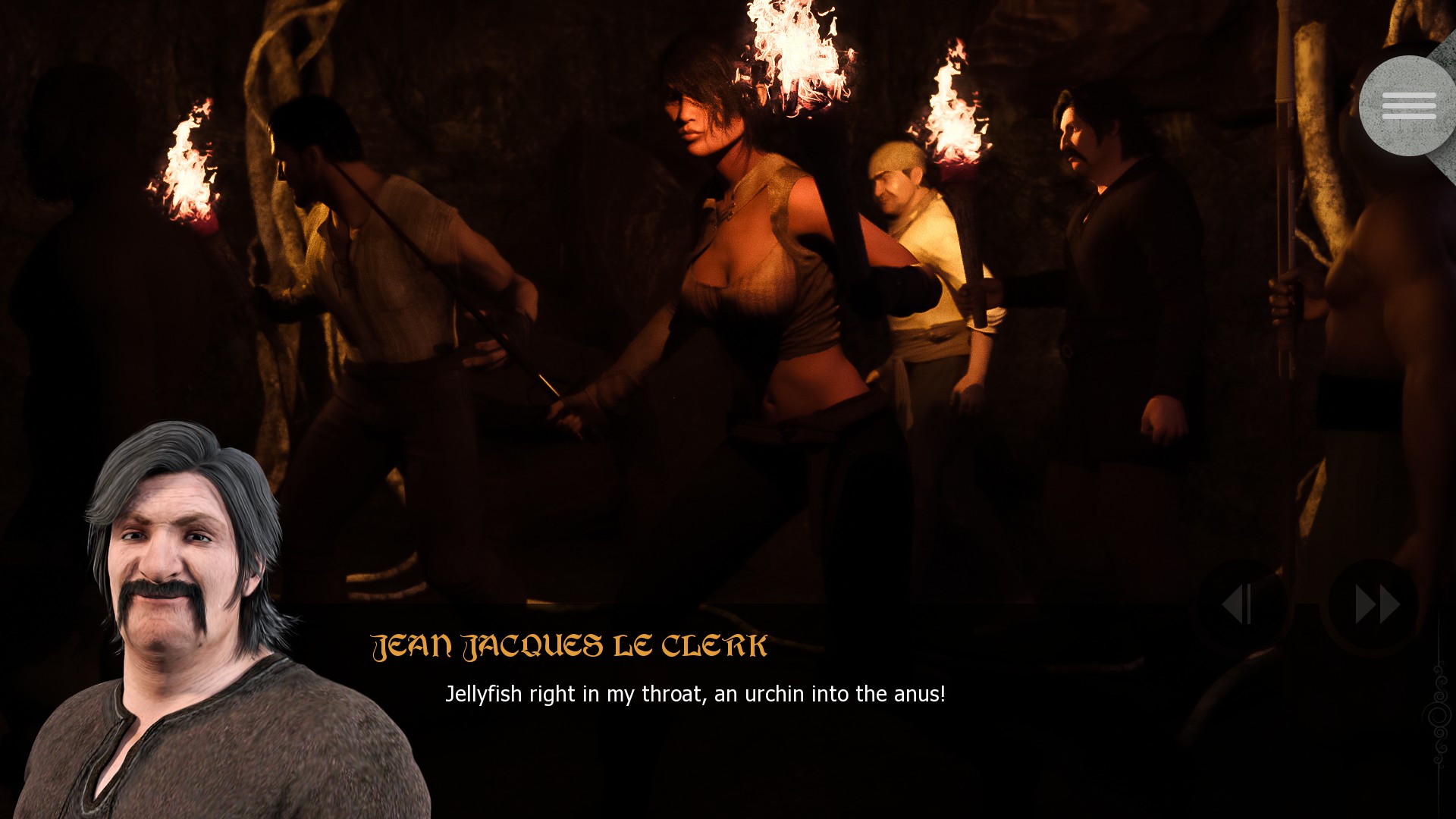 I struggled to make it through Neighboring Islands and then felt a rude shock at the abrupt second-chapter ending. The subject matter is interesting and the story should have been gripping in places, but it was ruined by the English translation. Though I would dearly like to recommend it, in its current state I just can’t bring myself to do so. If an adult, pirate-themed visual novel interests you, then, by all means, take a look, but if you’re planning on reading the English version, be prepared for a really rather awful translation that makes it hard to take the game seriously.