Age of Gladiators II is a very difficult, very niche management game that relatively few players will appreciate and enjoy, but for those that have the patience to delve into its statistics and management shenanigans, this is certainly a game that can bring great satisfaction.

Age of Gladiators 2 is a team-management game with some turn-based RPG elements. Think of Football Manager, since many of us know that one, but with gladiators instead of footballers and a thousand years into the future..and in space on top of that. And yes there are aliens, and laser beams, and premature deaths. There are also a ton of numbers, statistics, and charts to look at. Well, mostly that. It is a management game after all, with all the good and bad aspects of it depending on your inclination for these type of games.

General Gameplay
In Age of Gladiators 2 you play as an entrepreneur running your very own space station inside an asteroid because asteroids are cool. Ice cold actually. This is an enterprise that is all about Gladiator fights, winning huge amounts of money, glory, renown and all of that.  Sounds good, right? To do this, Age of Gladiators 2 puts at your disposal a complex set of functions, ranging from hiring your staff such as trainers and medical, engineers, to, obviously, hiring gladiators, training them to enhance their statistics, equip them with upgradeable weapons and armor, and even execute them on the spot if they do something wrong, or just make you lose money.

You will have to micromanage all the aspects of your gladiator enterprise: staff, combatants, training, healing, equipment, repairs, finances, debts, loans, morale, third party proprieties to enhanche morale or income, leaderboards, see how your competition is going and act accordingly… there is a whole lot of stuff to do in this title and it can be overwhelming if you are new to this genre or not particularly keen to charts, statistics and lots of numbers. On one side, the system is solid and allows a very in-depth management, on the other hand, less experienced users will likely find themselves overburdened and perhaps confused with all the stuff going on at once, so keep this in mind before buying.

The gameplay evolves via Turns, each is a day, in a set amount of days a fight draft will initiate and your gladiators will have to fight in either Rookie (non lethal) or Blood (lethal) leagues. Obviously, the lethal one is the real deal whereas the other’s just for training! At the end of each year, the six best gladiator managers with their teams will dispute a final where, in the inevitable end, there will be a sole winner. The next year, it all goes on once again! Gladiators will get injured, die, and be mutilated, perhaps permanently even. Modern technology and upgrades can aid you but in the end, all is about your managing skills and strategy. 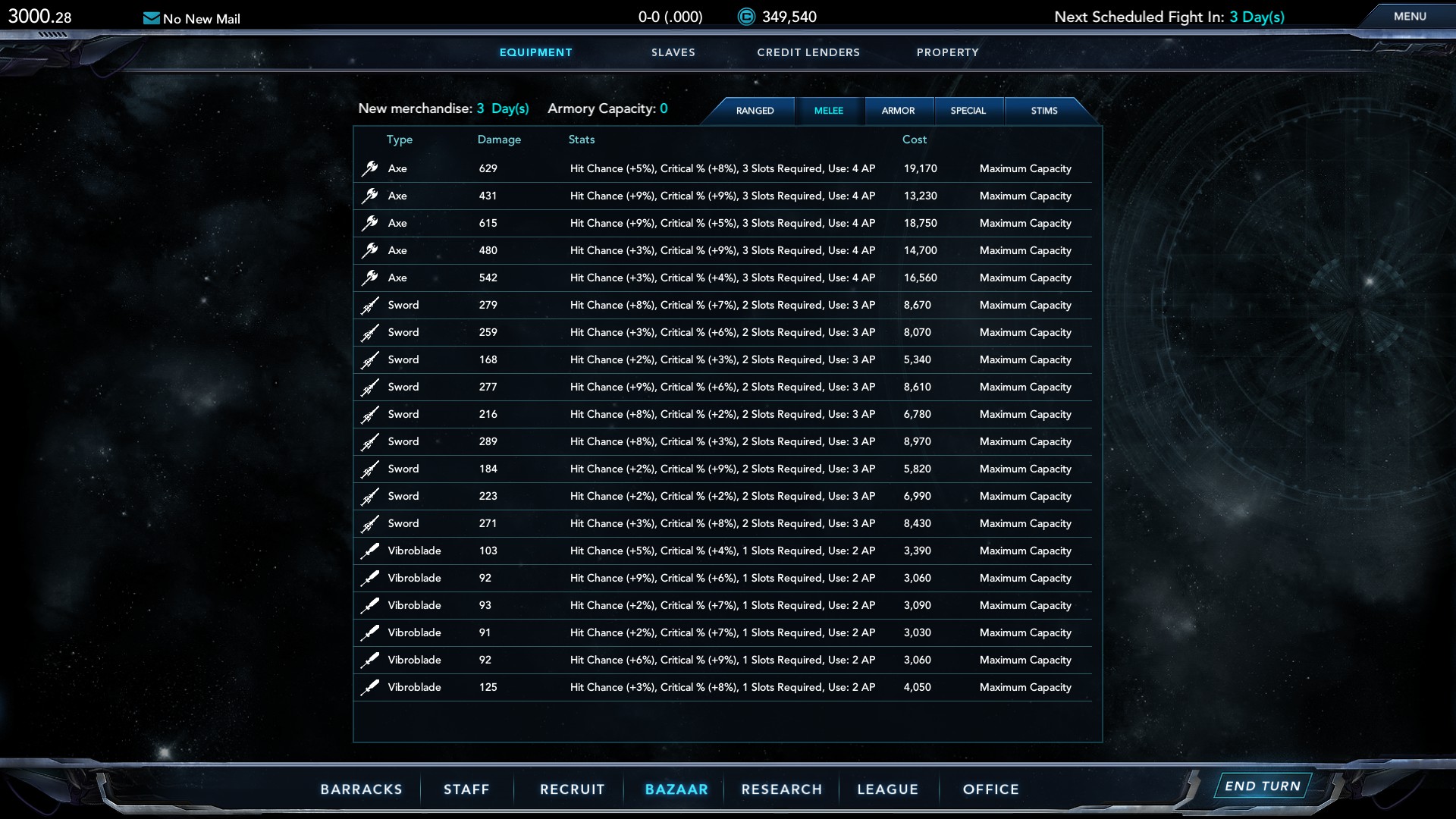 Combat System
The combat within the game can be played with a method of directly taking manual control of or just simulated automatically. If you decide to take control, as you should, the game becomes a top-down turn-based RPG showing your gladiators against their enemies in a hex-cell based arena. The battle system is based on action points with three attack types, ranging from more accurate to more powerful, consumables, and special moves to get bonuses if you are lucky enough.

Various armor and weapon types, along with statistics, play a big role in combat. Every move can be the last and attacks that connect well are very lethal as well as incredibly fast. The combat is rather unforgiving with luck playing a big role as a critical hit can end a fight in one shot pretty often. Your strategy on whether to play it safe or just try hard for that one perfect blow among many missed ones is up to you in additon to equipment and formation.

All considered, this combat is pretty solid and is a good reflection of how well you managed your gladiators overall.

Content
The game itself can go on forever, as the fights never really end. It is entirely up to you to decide when to retire and start a new game. Obviously, there will be a point where you have it all, your gladiators became demigods and nobody can stand in your way, sure. And that point is at least say, 50-60 hours away, if you are lucky severand good.

Balancing
No major issues to report.

Challenge
This is no game for casuals, and not even for hardcore players that have no experience with similar titles. It is a very niche, intensely difficult management game that few will appreciate to its full extent, and to only those players is it suggested. 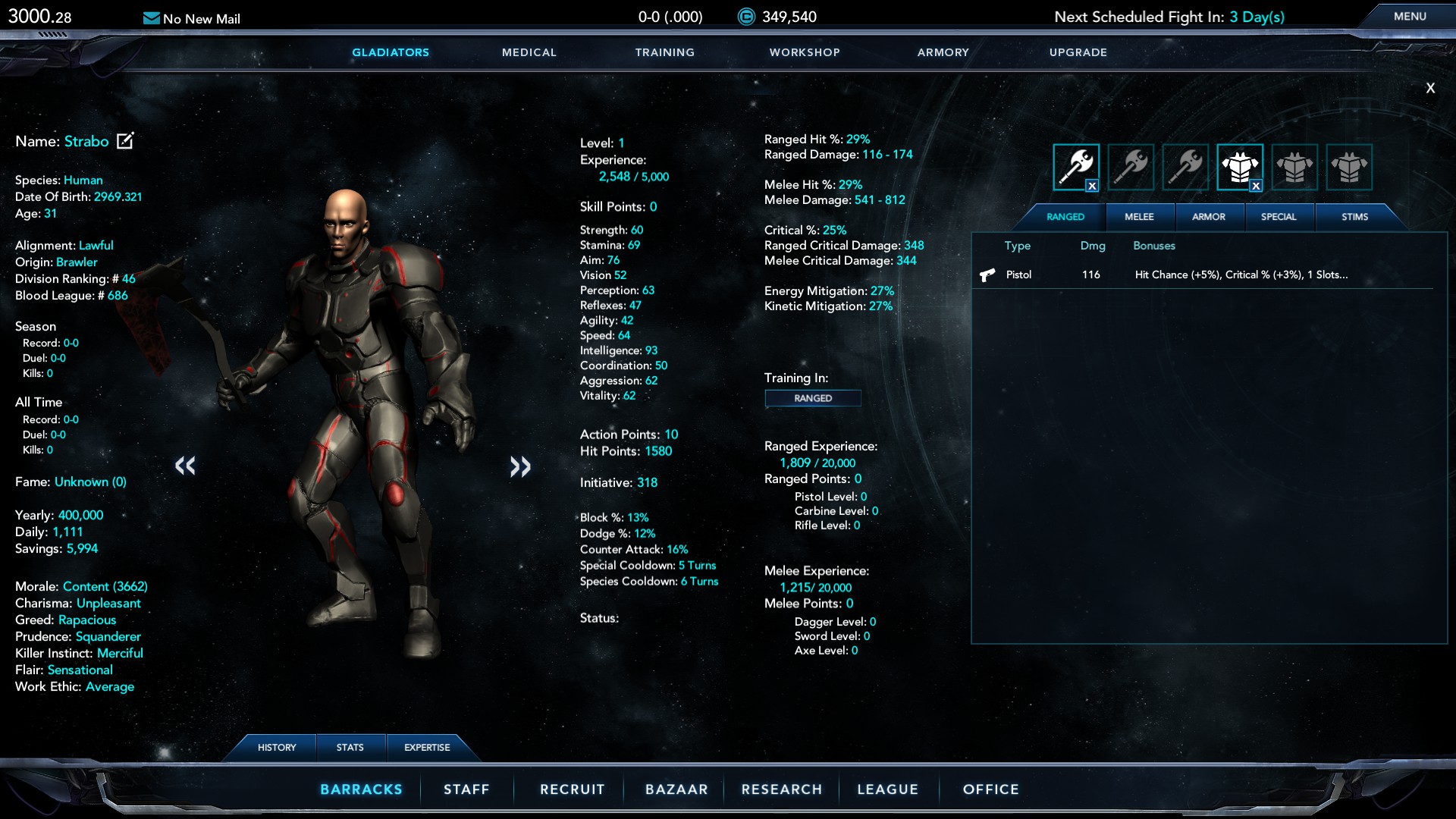 Graphics
Being mainly a UI and text-based game with combat being just an accessory to the main gameplay, the UI graphics are alright. The 3D combat graphics are obviously dated and with a lower-end quality, which is in this case feels alright since this is a management game that makes of graphics the last concern.

Sound
Soundtrack and effects are decent, sci fi themed, are well placed in the setting the game takes place in.

Performance
This probably can run on a potato.

AI
I found the enemy AI in combat to be average. They will generally follow you if fighting with melee and then attack, while if ranged or multiple gladiators combat, sometimes they will focus on one at a time to maximize damage, some other times this will not happen. Sometimes the AI makes mistakes or inexplicable decisions but mostly it will be good enough to keep you challenged.

Quality of Life
The UI is very important in this kind of games, and in that, Age of Gladiators does a pretty good job. 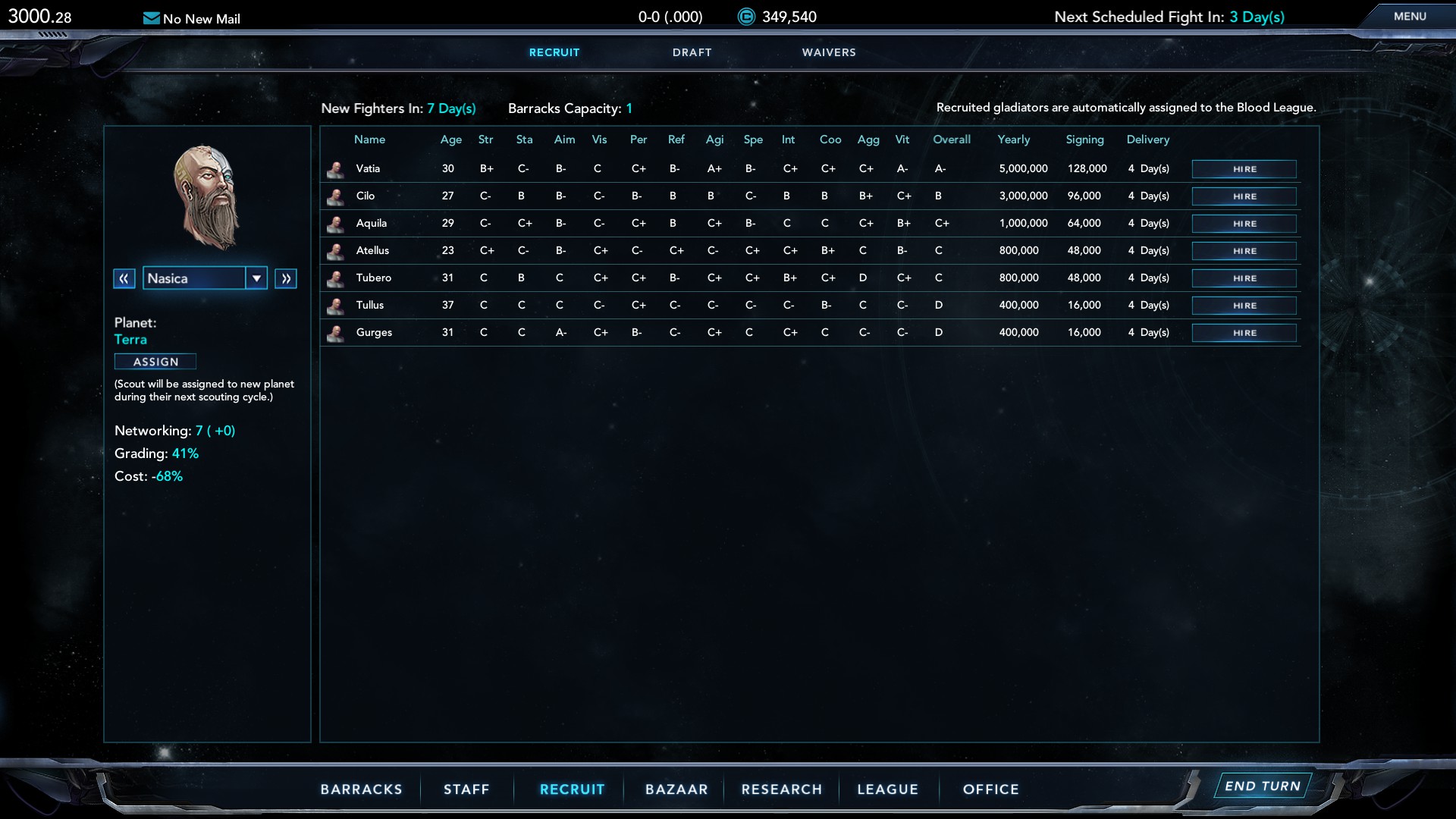