Galactic Crew is a single-developer attempt at an FTL-like game, currently in Early Access. I hope it gets a lot better.

[ We asked the developer for his feedback for this review and his comments are shown in red. The main thing he wants to make clear is that the game is under constant development and there are weekly updates. Our reviewer can only comment on the version he played at the time of writing though. ]

Galactic Crew is the debut title from solo indie developer, Benjamin Rommel Games. The game lets you take on the role of a space pirate or trader of your own choosing and drops you into a small spaceship in a procedurally generated galaxy where you are left to fend for yourself.

As a pirate, you earn credits and renown by, well, acts of piracy. Destroy enough ships — civilian and pirate — and an overpowered law-abiding nemesis will spawn and chase you about the galaxy, homing in on your position like a spacey bloodhound. As a trader you, um, trade. Earn enough money and again an overpowered nemesis will spawn and track you down, in this case, a pirate.

In the current Early Access state of the game, I’m not entirely sure whether the game has a goal or if you’re just supposed to wander around the galaxy until you get bored or die.

[ Dev says: The player’s supposed to survive the game as long as he/she can. If gets more difficult over time, because you are not only dealing with resource shortage, but with increasing difficulty of the enemy and the appearance of the Nemesis-class ships. The balancing of all encounters is done until this week’s update. ]

The graphics within Galactic Crew seem to be rendered in 3D, but the camera has a fixed angle, with only panning and zooming supported. Panning is sometimes jumpy and erratic. 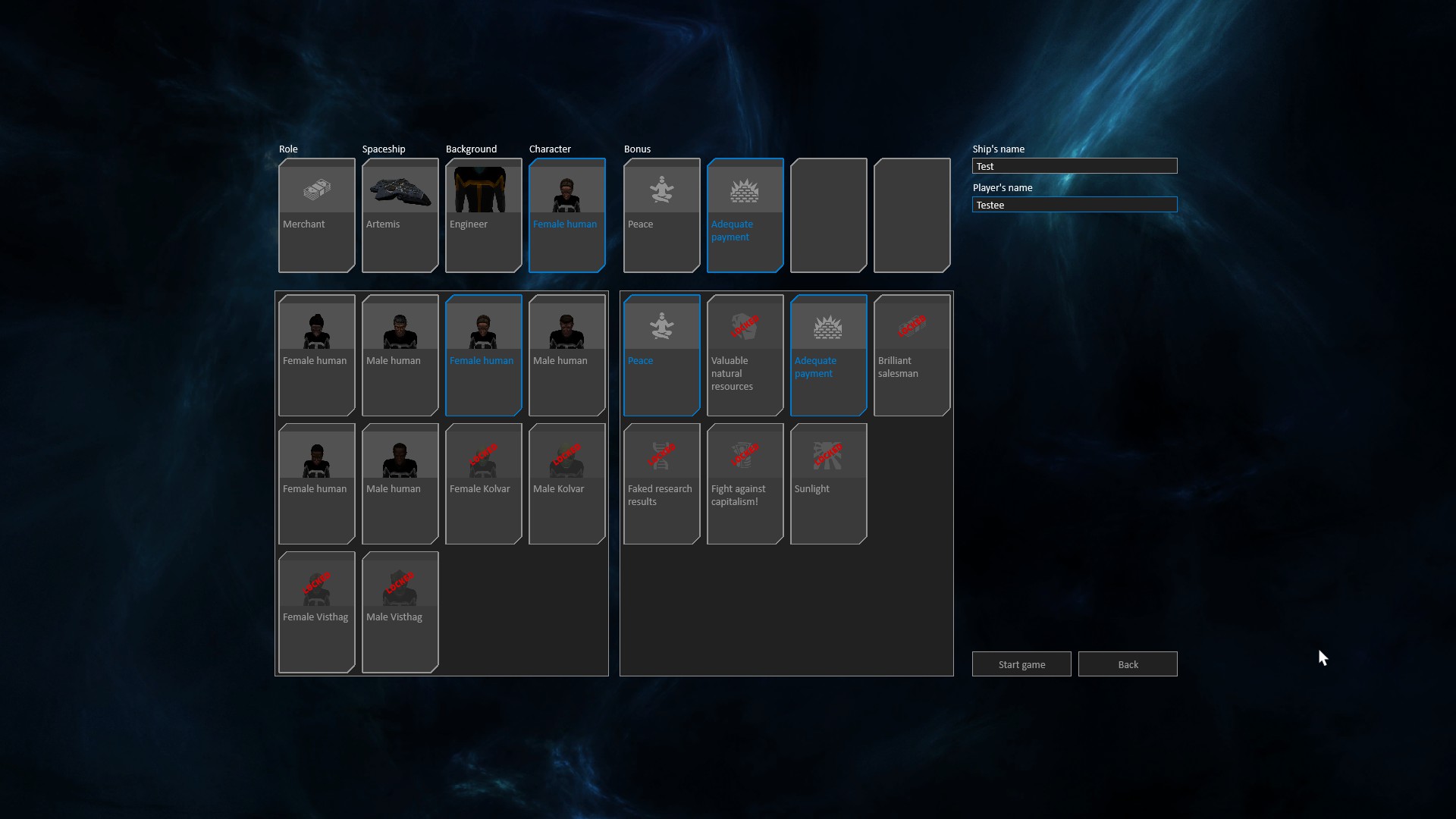 The ships are the graphical highlight of the game. They look really quite good at first, but there are only four of them and the graphics are largely static, with only a few visible changes as you play. The rest of the game seems to feature programmer art quite heavily. Character models are bland and uninteresting. Animations are reasonable, but not very varied. You can choose a model for your character when you first start the game, but they all look basically the same, with the same animations. Weapon effects are minimalist and disappointing: thin colored lines with no special effects or visible damage.

[ Dev says: This is on the TO DO list but I can’t tell you when the close-combat is going to be improved. It’s going to be somewhere in November I think. ] 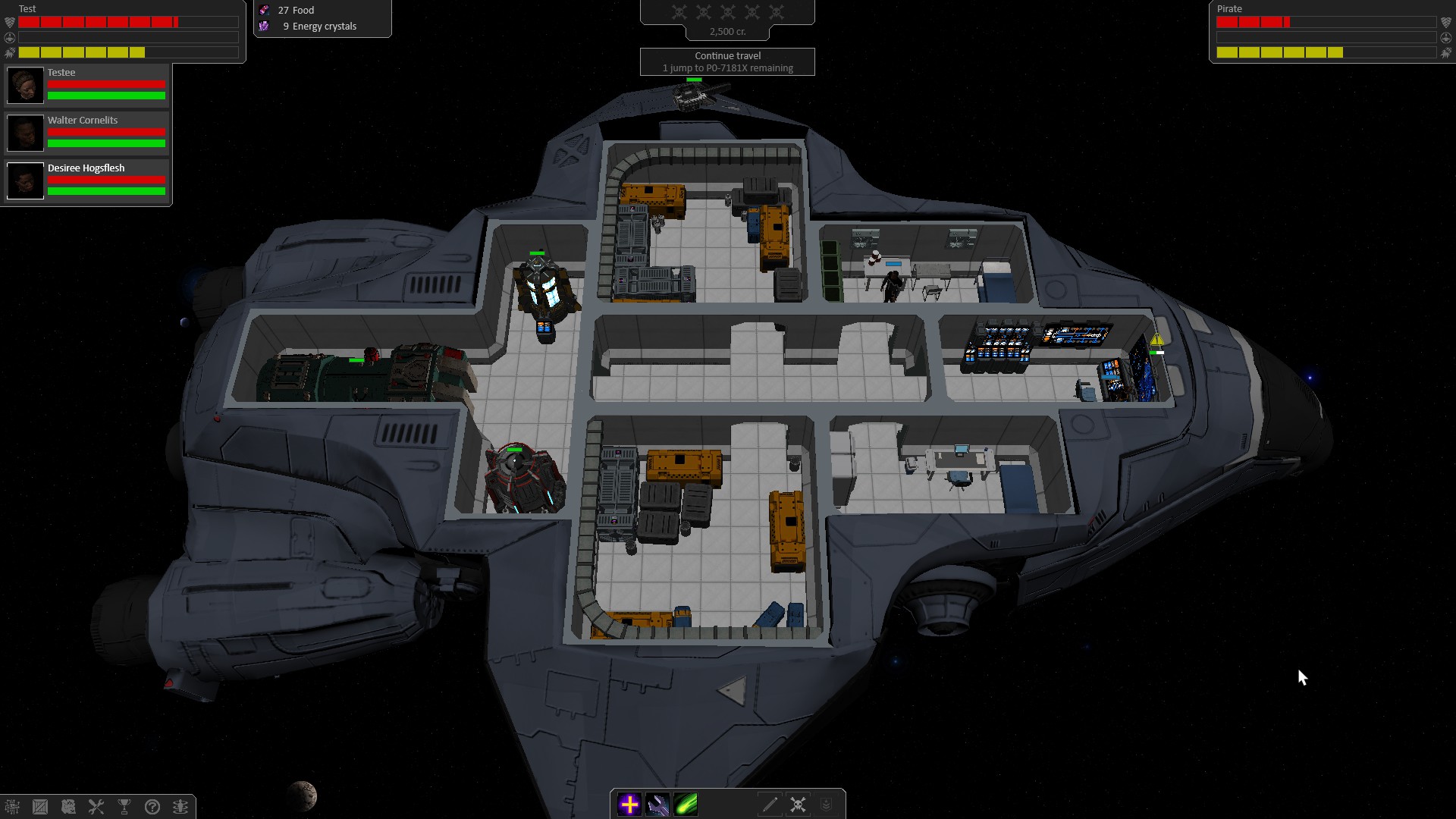 The interface is only partly explained and sometimes unclear. Ship components, though very few in number, don’t have tooltips and mostly have no obvious effects; it took me half an hour of pressing buttons and searching menus before I worked out that you need to walk a character into the teleporter manually to board an enemy ship in combat.

The few music tracks are okay but mostly forgettable: a range of short, repeated electronic tunes with a minimalist feel, ideal for background music.

As for the sound effects, they come off as very basic, with a couple of different weapon sounds and little else.

The tutorial is fully voiced and there are a number of spoken status messages in the game, such as when a system is destroyed. This is a nice idea and the audio quality is surprisingly good, but the voices themselves seem amateurish and out of place.

[ Dev disagrees with all of the above, but it’s a matter of taste/opinion. ]

Galactic Crew plays similarly and is obviously heavily influenced by FTL, but it is inferior in basically every way; comparing the two is an exercise in disappointment for the Galactic Crew player. 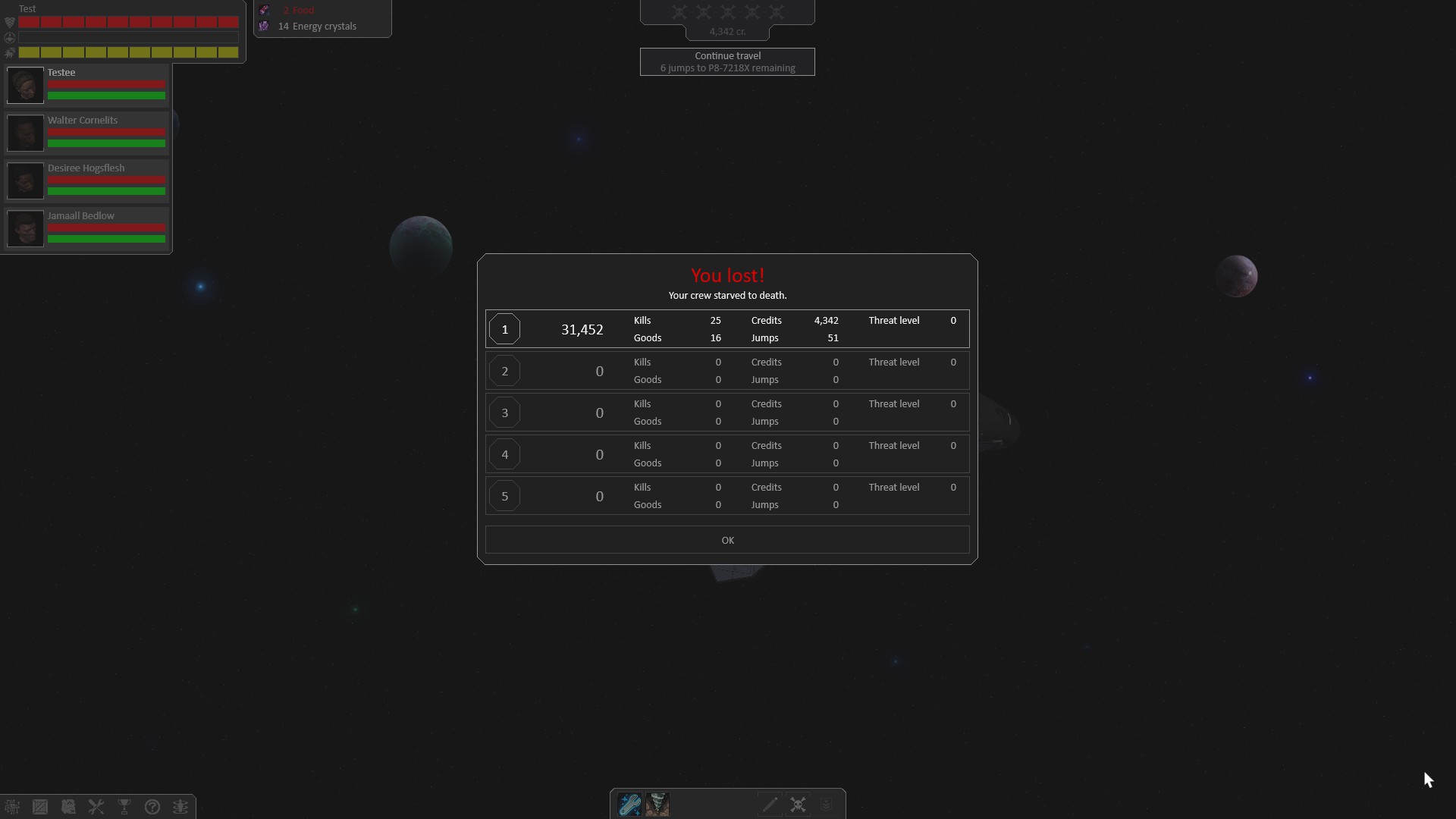 Each time you start a new game, a new galaxy is procedurally generated. This itself is a bit disappointing, as there are so few elements that every game ends up basically the same anyway: a few space stations, one shipyard, and a number of other nodes of two different types, asteroid belts or “solar systems”.

[ Dev says: More objects are in development or were added in one of the latest updates, like the shipyard. ]

Space stations allow you to retrofit modules and systems to your current ship and to trade from the small array of goods available; shipyards allow these same actions, adding the ability to buy a new ship from the four available; asteroids allow mining for resources, if you have a mining laser; and solar systems provide random encounters.

Ship layouts are extremely restricted, so retrofit choices essentially boil down to whether you want a teleporter or a shield and whether you can spare the crew/officer space for a hydroponic module, to save on food. Once you can afford the most expensive ship you no longer even need to make the choices; you can simply have everything. 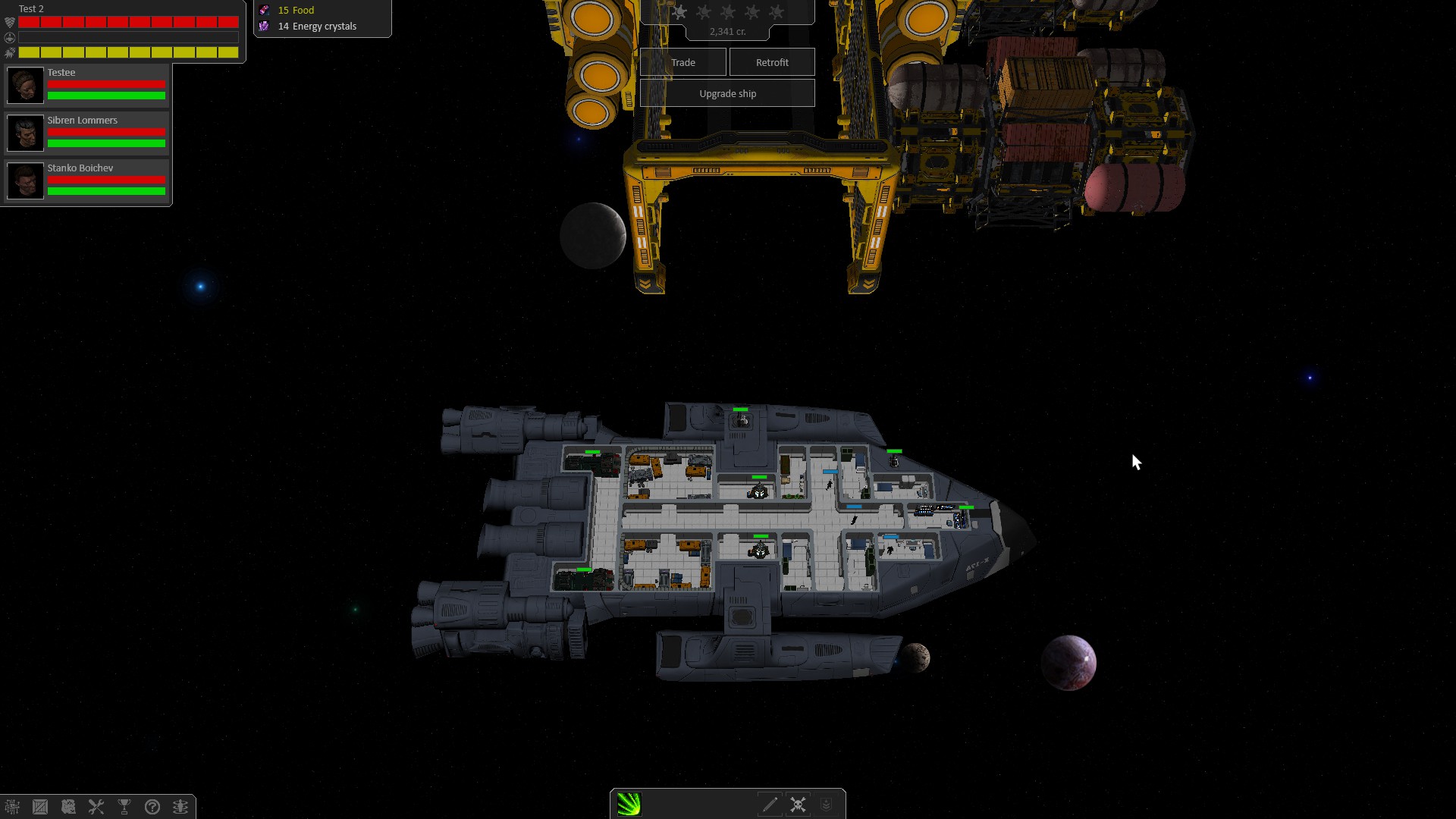 Trading is limited, too. Every station seems to have the same prices for all goods, or very nearly so, and there are no practically no differences in any of the trade goods except for food and energy crystals, which you’ll probably end up keeping for your own use anyway. The rest may as well just be removed and replaced with a generic “Trade Goods” placeholder.

Asteroid mining doesn’t seem to work, or at least I couldn’t manage to do it, even with an engineering background.

[ Dev says: You need an engineer and a mining laser. Your engineer has a skill for mining like the soldier has skills for attacking the enemy’s ship. ]

That leaves the random encounters, which one might expect to provide variation and replayability as in FTL, but which actually all devolve into four situations: nothing, combat, planetary exploration, or betting food or energy on potential gain. The first of these is straightforward: sometimes nothing of interest happens, or nothing you can do, anyway.

Combat is rudimentary. You select a character, select your weapon or weapons, and target an enemy ship component. Enemy weapons are never destroyed before the hull is reduced to zero, so there’s basically no tactical targeting. [ Dev says: Some encounters have heavy shields and you can penetrate them with any Particle Laser that were recently added. In addition, disabling all reactors on the enemy’s ship prevents them from shooting. You can also disable their engines so that they can’t flee anymore. ] Meanwhile, your enemy is attacking you, so you assign your other characters to repair the module being targeted. If you have a teleporter and you can work out how to use it then you can also teleport characters onto the enemy ship, but mostly you don’t need to bother. [ Dev says: By teleporting to an enemy’s ship you have another way to bypass their shields to do damage to their systems. ] I loved FTL’s combat. I have trouble staying awake in Galactic Crew’s. 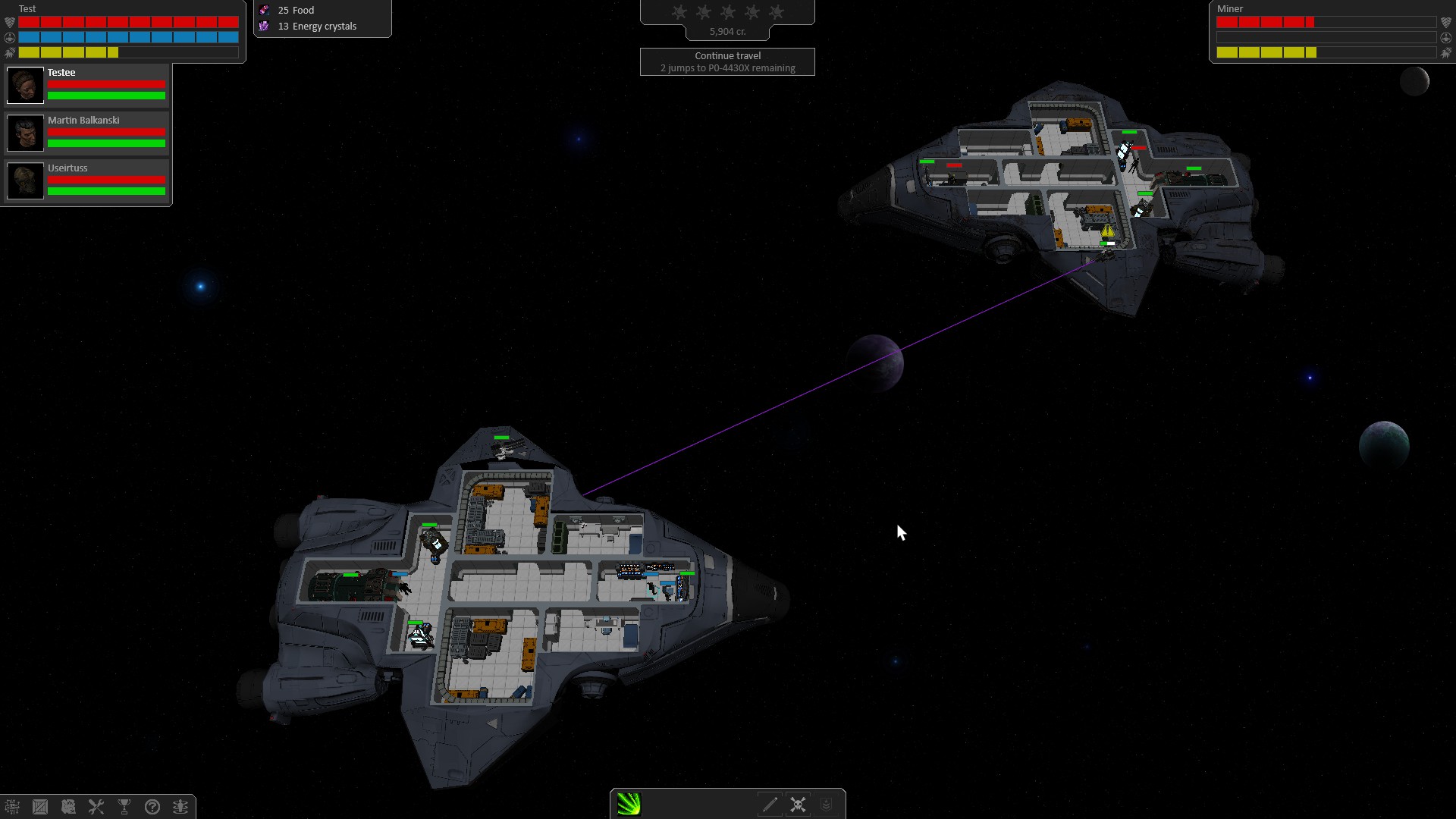 Planetary exploration sounds like a great idea, but as with combat, it’s rudimentary and boring. You teleport to the surface, wander around an extremely small map, pick up some resources, and leave. It’s disappointing in the extreme. It’s also very laggy to pan the view. 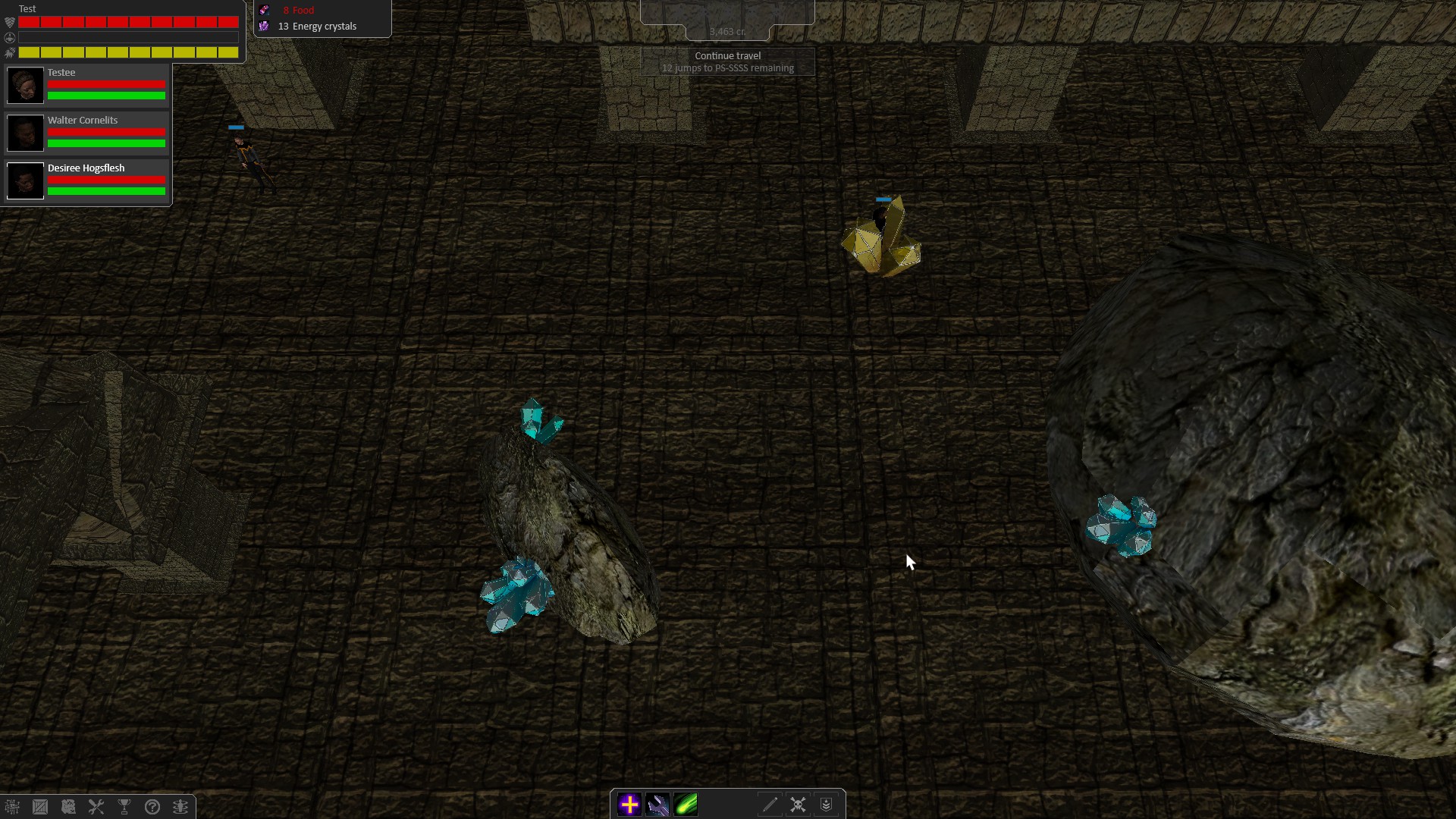 Finally, the remaining encounters let you help someone, explore a derelict, or similar. These either devolve into combat or consume food or energy to give you a random bonus: a crew member, salvaged resources, or nothing. There’s little variation and little of interest.

[ Dev says: Actually, the variance is bigger than in FTL… More events are currently in development. ]

Add to this lack of interesting content a number of annoying bugs and the game really doesn’t seem very appealing at the moment. The worst I’ve seen are the exceptions (crashing the game) and broken in-game achievements. The price is also way too high for the content available, especially when you consider FTL’s regular and sale prices.

[ Dev says he fixed several bugs in the first week and it should be fine now. ]

I was really excited to have a chance to play Galactic Crew, but so far I’ve been disappointed. It’s a bare-bones FTL clone with boring combat, limited tactics, and repetitive gameplay. Even though it’s in Early Access I can’t bring myself to recommend it, especially at the asking price. Play FTL again instead.