REVIEW: Age of Fear 3: The Legend

Let’s take a look at the new RPG, Age of Fear 3

Age Of Fear 3 is a top-down 2D tactical RPG / Strategy game with management elements. In this title, you will be in command of an army composed of many different units of your choosing, ranging from walking trees to orcs, to undeads, to mercenaries: a menagerie of different fantasy characters and species are present and almost all are recruitable for your army. The game consists mainly of two separate modules, one is the map and story where you decide what to do and where to go, while the other is the battlefield where the numerous battles take place. This title is pretty much old school in many ways and that, nowadays, is a really good thing.

General Gameplay
The first half of the game, the map and storytelling section, works as any normal map you can think of. There will be one or more locations to choose from, and each one will be a different branching arc of the story, assuming there is branching available, which is not always the case. A dialogue prompt will be triggered and you will be able to make choices such as which party support is used during a multi-faction fight, which way to go in some dungeon, and so on.

Such choices will impact what enemies you encounter and where the story goes most importantly. There is a management screen before each battle where you will be able to equip both Heroes and normal units in detail, each with customizable skills, inventory, and progression, and also the option to buy and sell units, dismiss existing ones, and evolving surviving ones who got experience.

The second part of the game is the battlefield, which is depicted as a standard, old-school 2D top-down field with all the units on it. Each unit can be analyzed to gather information, this applies to everything from doors to environmental hazards etc. so yes there is a lot to read and learn in each battle about enemies and environment alike.

Combat System
The combat in AoF 3 is turn-based. Each character will be able to either move or use a skill (unless a special ability allows both), have its own movement range and attack radius. The equipment on heroes often grants passive and active unique skills, usable during battles instead of regular attacks. All of this also applies the enemy, the only difference being that if one of your Heroes dies, the battle is immediately lost, so you should move them wisely because enemies will make them priority targets.

Sounds simple? It is not. Each enemy has its own equipment, statistics, resistances, and whatnot, you WILL have to learn all of them in each battle and act accordingly. In this game, here is a rather complex system of stats so AoF 3 is definitely not something for beginners. Killed units are lost forever unless a special ability allows them to resurrect after battle, those who survive a fight will often be able to level up and gain new abilities and traits, becoming better.

Also, certain abilities will allow you to convert enemy units to allies and retain them after a battle. This is a feature not often seen in this type of game and helps vary the gameplay in a good way. Battles can also have victory or defeat conditions of their own, so each battle is different in some way.

Content
There are a HUGE number of units and equipment options in this game with many battles to fight, and two different campaigns. Content-wise, there is plenty to do and see.

Balancing
The standard difficulty is fair enough, pretty tough I have to say, even for a hardened RPG veteran like I am.  In my opinion, it is tough to get through certain fights, but never anything unbalanced or broken. Higher difficulties sure will be a kick in that place tho.

Challenge
Overall, the rating here is for a High challenge rating, since the game system is rather complex, higher difficulties are really, really hard as far as I’ve seen, and managing a balanced army for each situation without waste is something that will challenge even battle-worn veterans of the genre. 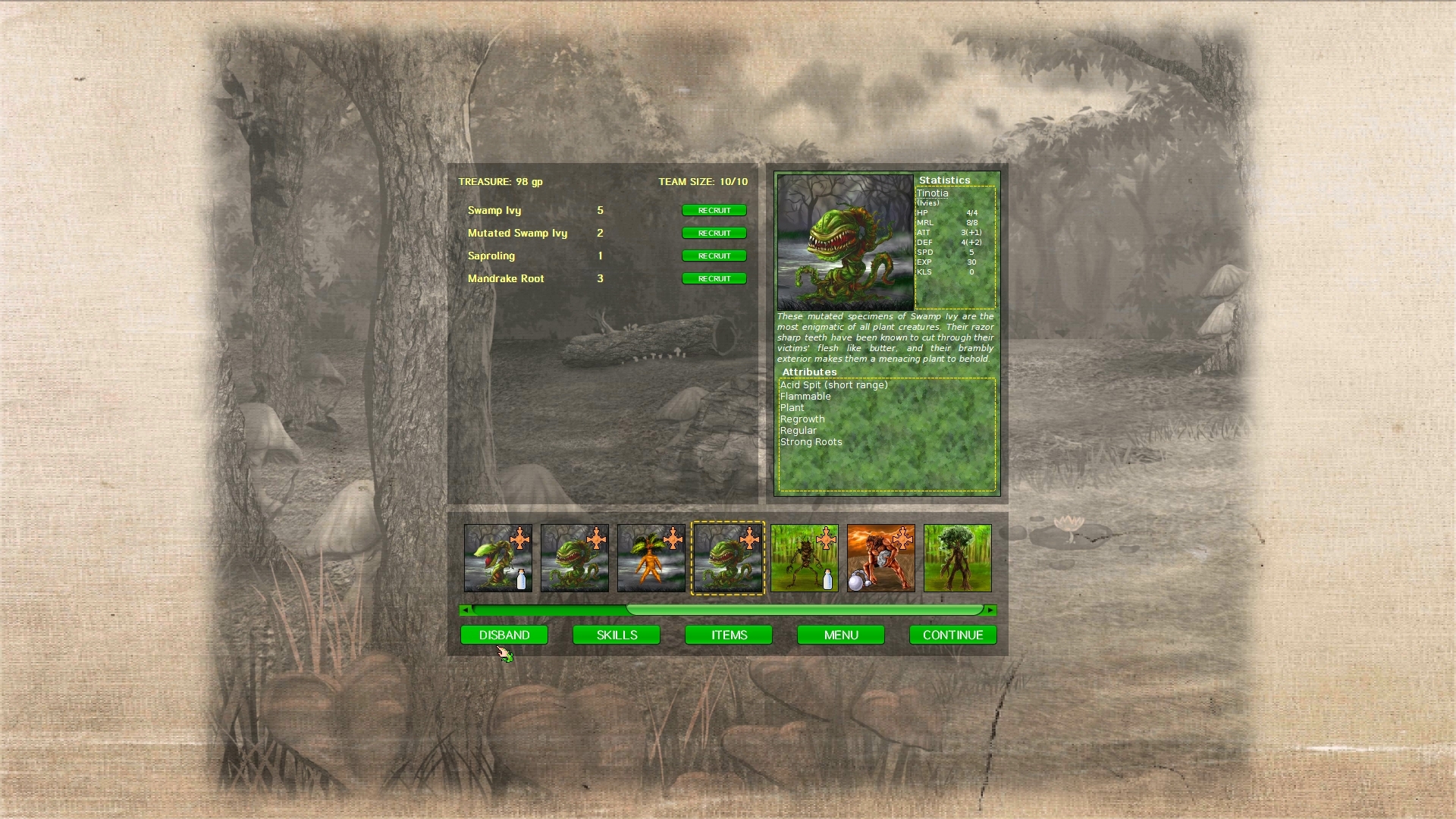 Graphics
The game’s graphics are pretty simple, 2D sprites, backgrounds, maps, and portraits are of a decent quality. The characters have enough detail to be on-par, but overall the game has sufficient to decent levels in this field. For a game that clearly throws everything towards gameplay and content while not necessarily as much towards graphics, it is an acceptable balance.

Sound
The soundtrack is actually pretty good, sound effects and unit chatter are remarkable for the simple fact that the developers gave unique lines to each unit, and there are a whole lot of them.

Performance
Issues were fixed from the developer temporarily, until a more permanent fix for the previous issues. No problems to report here as of now. Use the RESET button in the game options if performance is still bad, as the developers fixed it.

[ Performance issues have since been permanently patched. ]

AI
The enemy AI will target Heroes and other sensitive units if they can to bring a rapid loss to the player, generally maintaining a decent formation sending melee units first and ranged behind to support.  As far as I could tell, the AI at Standard rank can be a good challenge already.

Quality of Life
The UI is pretty old school and not very immediate in many things, which can be a good or bad thing depending on who plays. In my case, a good thing.