Dark Souls, Hotline Miami and Ghost in the Shell got put in the blender, the result was a beautiful, gritty, drenched in blood beast that has the same raw violent emotions as Thumper and Hotline Miami, but requires the precision of Dark Souls on many an occasion. It’s *very* good indeed.

Where Hotline Miami was a shot of LSD induced violence, this replaces the LSD with the darkest flavour of Cyberpunk, where all hope is lost and you’re chasing the last embers before they die out.

This game wants you to feel. Right from the outset it wants you to know you’re walking into a world where your level of control isn’t entirely your own, where your mind can be controlled by others, where your face is replaced by an anonymous digitised mask that plays gifs, memes from obscure references (as an example, the red and black flashing KILL YOU comes from Cyber City Oedo 808, Hello Darkness references Simon and Garfunkel), you are a living, walking set of pithy phrases that sum up your emotions in a quick throwaway comment, and a swift swing of your pipe and your weapon, the titular RUINER. It wants you to feel hate, the use of red and sharp colour is by design, it wants to tap into that little bit of you where the adrenaline flows a bit faster and your reactions work a little harder because you going to need those reactions. 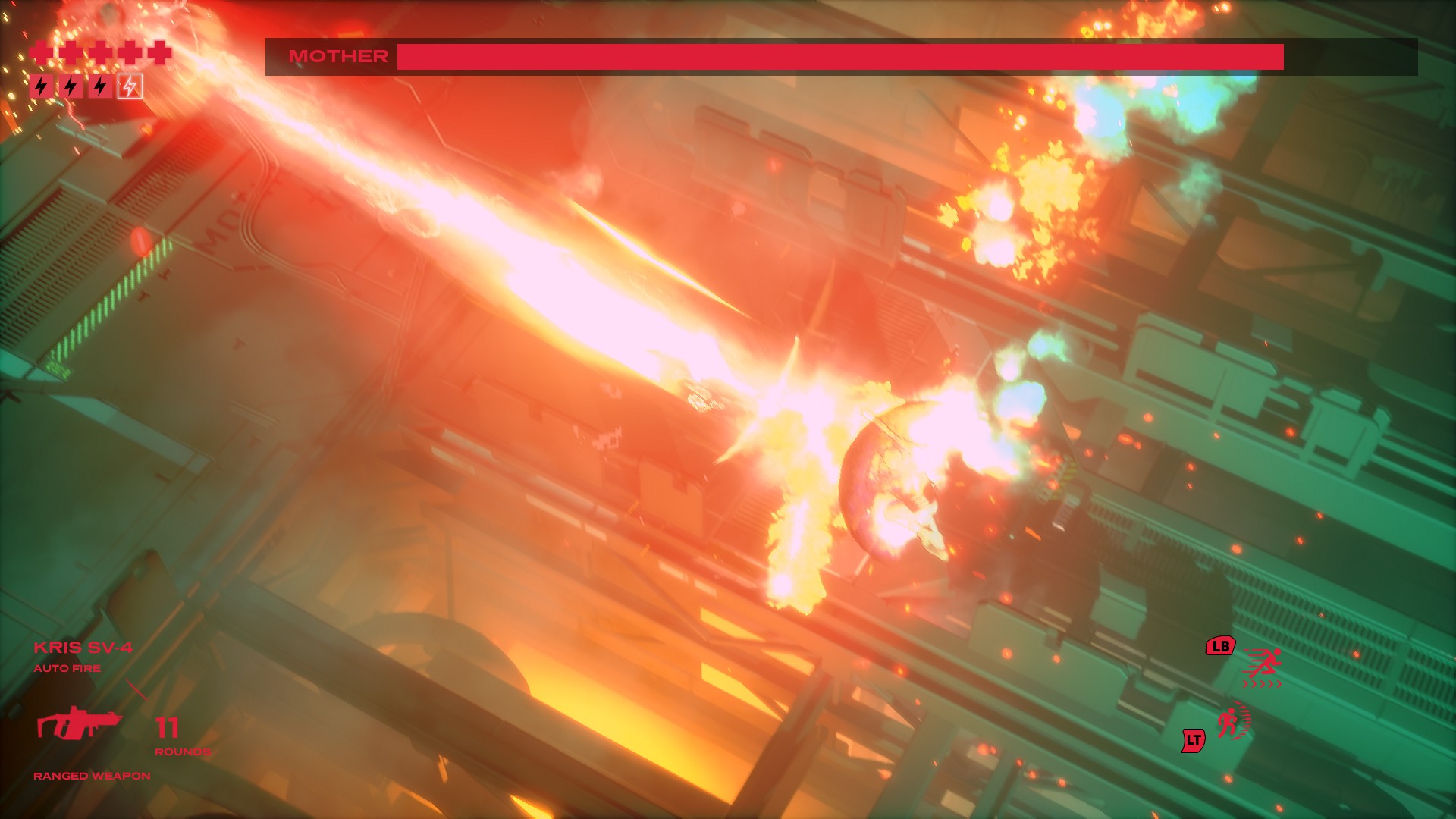 There’s a perfunctory hub in the game, which serves as a brief respite and place to pick up side missions, but the vast bulk of your time is going to be spent fighting or admiring the sheer brilliance of the worldbuilding on offer. This game is literally drenched in the kind of worldbuilding that a lot of much higher budget games would aspire to, with attention to detail being lavished even on things that would fall into the “The devs didn’t need to do this, but it’s nice to see” category. The lore is extensive and provides a lot of extra detail in the form of a codex much the same as DOOM’s (albeit being automatically filled in when you pick stuff up or encounter enemies, no need to fish for extra data in this one). In some ways I wish the hub had been expanded on a little more than it had, it’s a little too shallow for what it is, you get to dig around but there’s not a lot to find, when really they could have added options to allow for more unlocks on both ranged and melee weapons (as it stands, you only have a couple of unlocks and those happen at strictly defined plot points, it would have been neat to allow you to choose mutually exclusive weapon unlocks at specific karma levels to improve your ranged arsenal along with cosmetic suit unlocks to change your appearance). 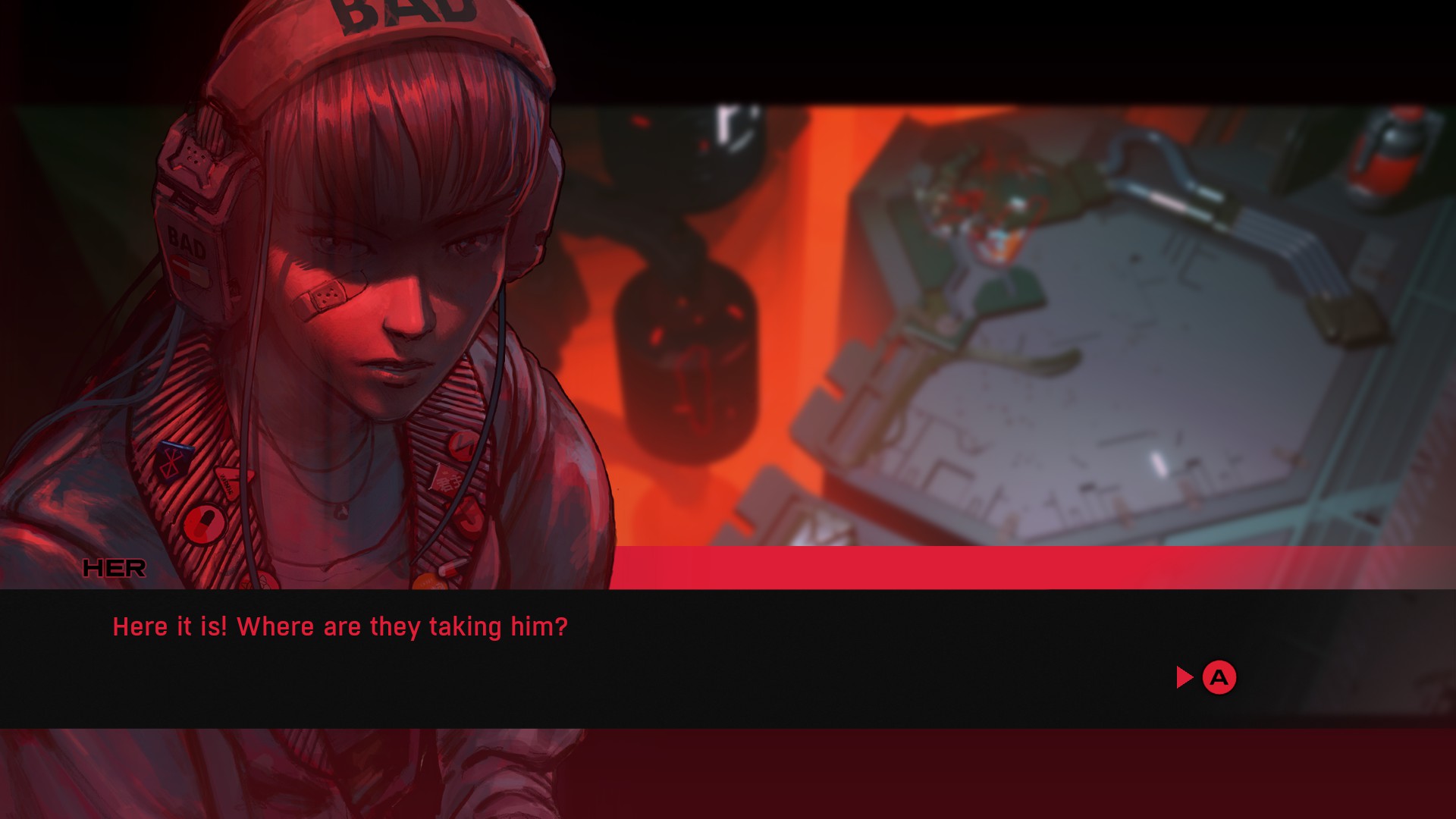 As you dig into the detail and nuances of the game, the more you realise that this is a world very much on the downward trajectory. Gangs cling together defending what little territory they have from mega-corporations who are stripping what little is left of the Earth for profit and gain, private security runs unchecked and operates with a license to kill should you dare step on their property without the correct clearances, anyone not signed up with a company or famous or talented is quickly relegated to being homeless or destitute. This world actually makes the ones created by say, Satellite Reign look quite cheerful and it has more in common with ones like Dark Souls. This is not a nice place to be, and everyone here is trying to survive. Morals are something that tends to get in the way of that ethos.

Which brings us neatly to the story and where you come in, you, the protagonist (and I won’t use the term hero, because you don’t overly feel heroic) are hacked and taken over by a disgruntled programmer from the very company you’re tasked with killing the head honcho of. You get to the door that leads to the office of said bigwig when your signal is intercepted by a potential ally and they stop you from completing the assassination, you escape, are given a fresh citizen chip and are advised that your brother was being held hostage, hence why you were put up to this in the first place. However, given the way the story begins, it’s eminently possible you’re being used by this new ally, so it leaves you to work out whether your newfound friend is really on the level. 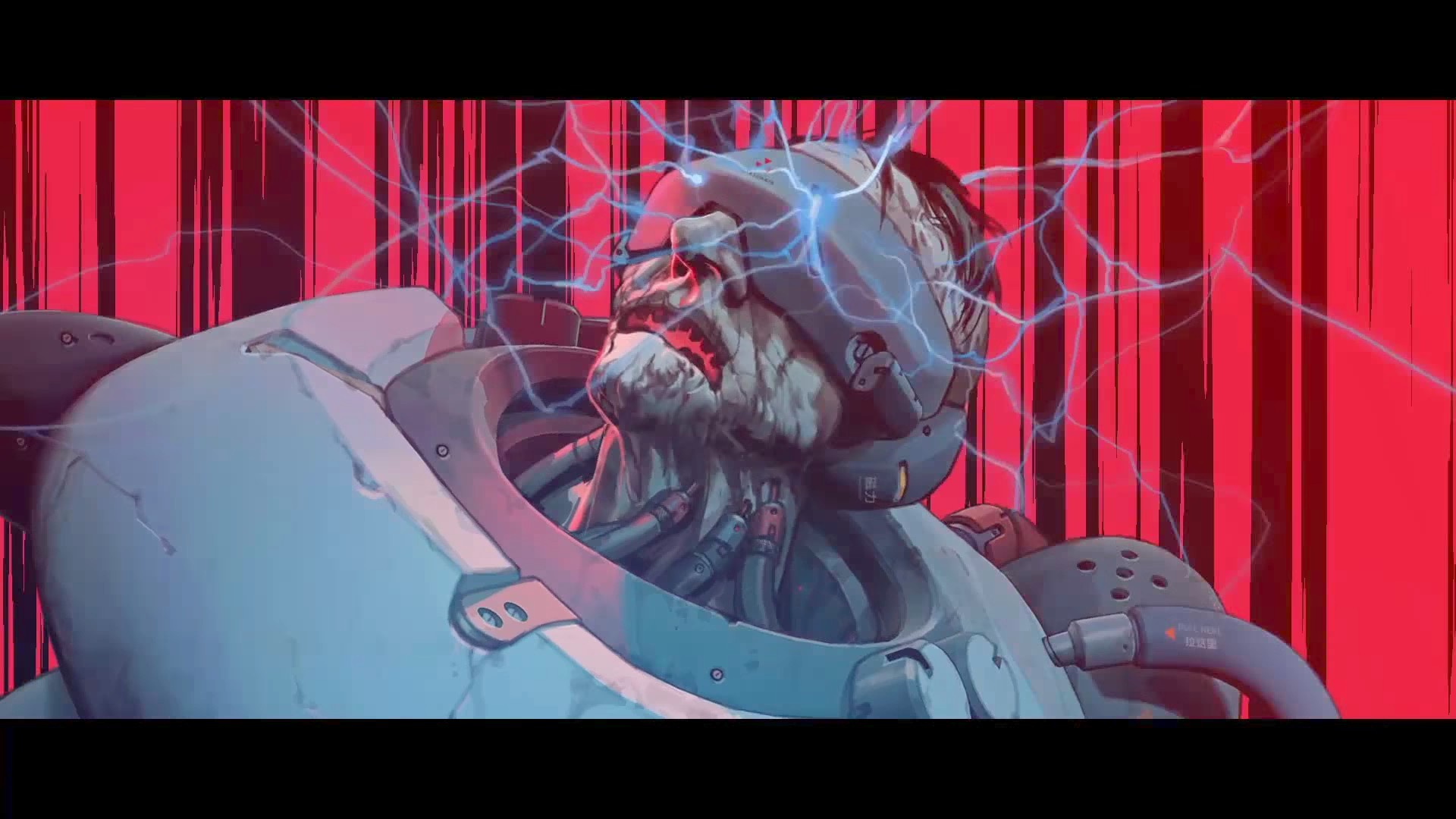 In case it’s not obvious, the worldbuilding and artwork are both jaw-droppingly gorgeous, taking copious cues from Ghost in the Shell and Cyber City Oedo 808 and then placing its own unique, much darker take on future-tech noir. I suspect the artists had a field day with this title and there’s lots of incidental art you only get to see for a few seconds, but if you’re fast with the screenshot tool (like this image above) you’ll get some fantastic bits to take away from the game. Sound design too is way, way up there, though it can get just a mite too busy even for a dedicated soundcard setup when the action gets flowing, there’s a lot going on and it can become a mixture that sounds somewhere between a drumkit being assaulted with a machine gun and someone grinding coffee beans using a mortar and pestle.

The world is one of survival, the characters you meet are all unpleasant at best, or out to screw you or use you in some way, none of them qualifies as morally clean in this world, so you’re dealing in shades of horrible right from the get-go. Even “her” who is arguably the least messed up (physically or mentally) is more a master to you as the slave, taunting you when you fail by saying “That was painful to watch” or “Get back up puppy!”. Unlike a few other reviews I don’t exactly see this world as holding some kind of gender bias, this is humanity reduced to its most base, reduced to the need to survive, or the desire for power over all else, and in that sense, it’s all about who can control who. The house of pain served by a dominatrix will offer you skill points in exchange for tales of your failure and pain, in effect requiring you to surrender to death. Every little bit of control you give up either consciously or unconsciously tugs at the central conceit of the game, you’re not the one pulling the strings here. 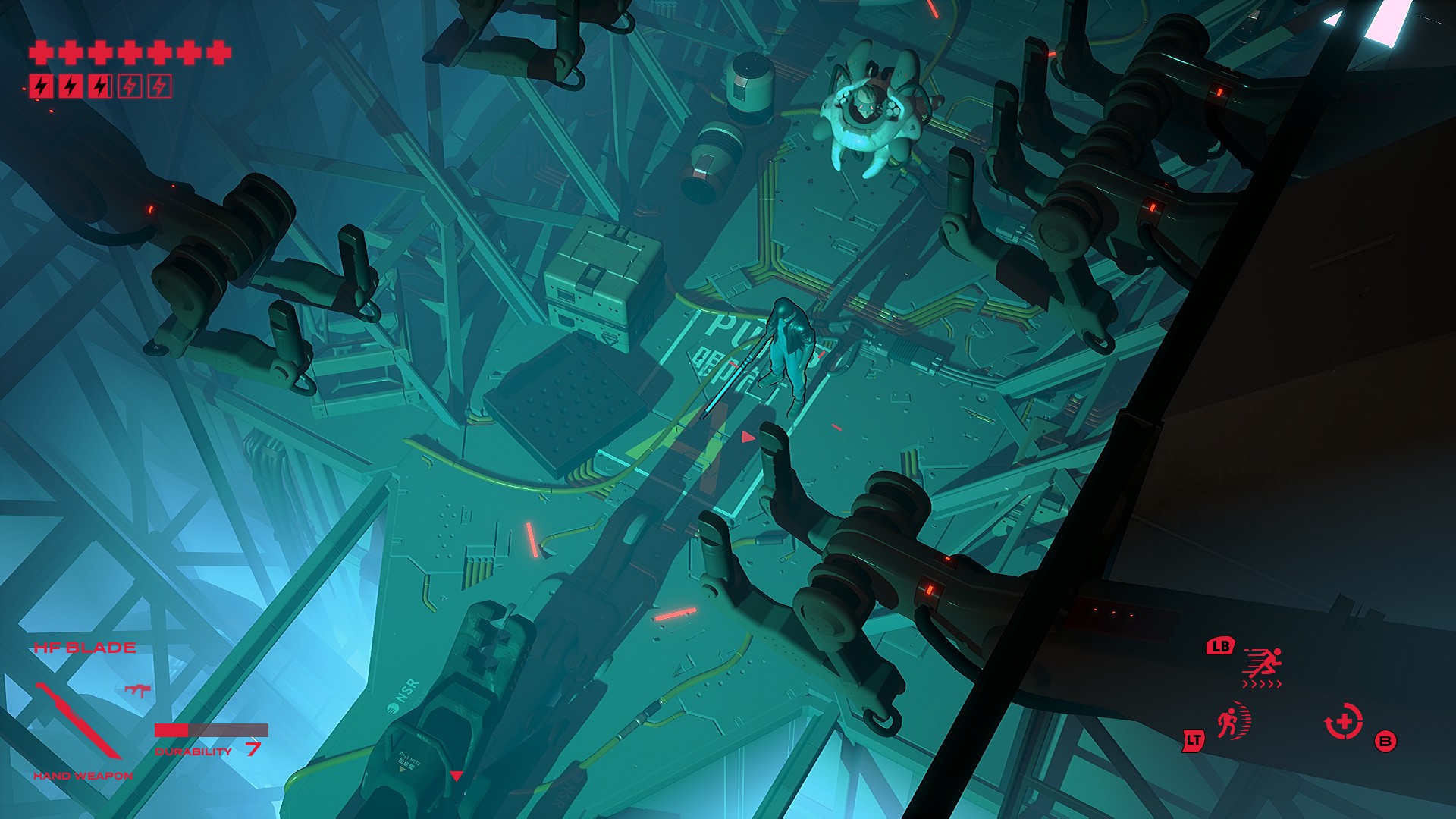 So, I’ve covered a lot of the stuff around the main event, now to go into depth about the combat. Anyone who’s played Hotline Miami will be intimately familiar with the rapid pace of “Kill > Die > Reload > Repeat until one gets it right” but there’s a lot of changes which differentiate this from HM, starting most notably with the health and energy meters, things which can be replenished during the fight with pickups, or managed with the appropriate upgrade. These meters need a weather eye during each fight as both can drop and rise pretty fast (special note, if you’ve a razer chroma type mouse or similar, it’ll highlight health and energy using the LED’s, so you can use that as a sidebar meter rather than having to glance to the top corner all the time), in addition to this you’ve a palette of swappable abilities which you can manage within a submenu during fights, and there are situational uses for pretty much every single one. Progressing through the game will give you a steady trickle of skill points with which you can unlock various commands available to you, starting with a dash and a directional shield, and working up to droppable barriers, the ability to hack foes and make them work for you, along with frag and shock grenades and even bullet-time if you so wish.

Much like HM you get the ability to pick up enemy weapons, and in the projectile weapons case there’s a fixed quantity of ammo (upgrades can increase just how much ammo you get) before you have to ditch them, that said with sufficient upgrades your default RUINER gun is more than sufficient for the vast bulk of gruntwork, with heavier duty work only necessitating the special weapons that the soldiers drop as and when (which weapons you prefer is very much a matter of taste, but the TAS-8 shotgun tends to be a mainstay if only because you don’t have to be absolutely precise and one shot more or less guarantees one kill). Melee weapons that are not your default pipe or “Nerve” Nano-7 that you acquire after the car park have Durability (once again, upgradable with the right set of skills) and this means they have a finite lifespan before you’re forced back to the default melee weapon. This is where I have more of a problem because the default weapons do get absolutely outclassed and fast as you progress, which means unless you’re carrying one of the nonstandard melee items such as the HF-Blade you’re going to have a problem engaging in melee with any degree of reliability, and that’s a problem for a game where melee is a significant component of the menu. 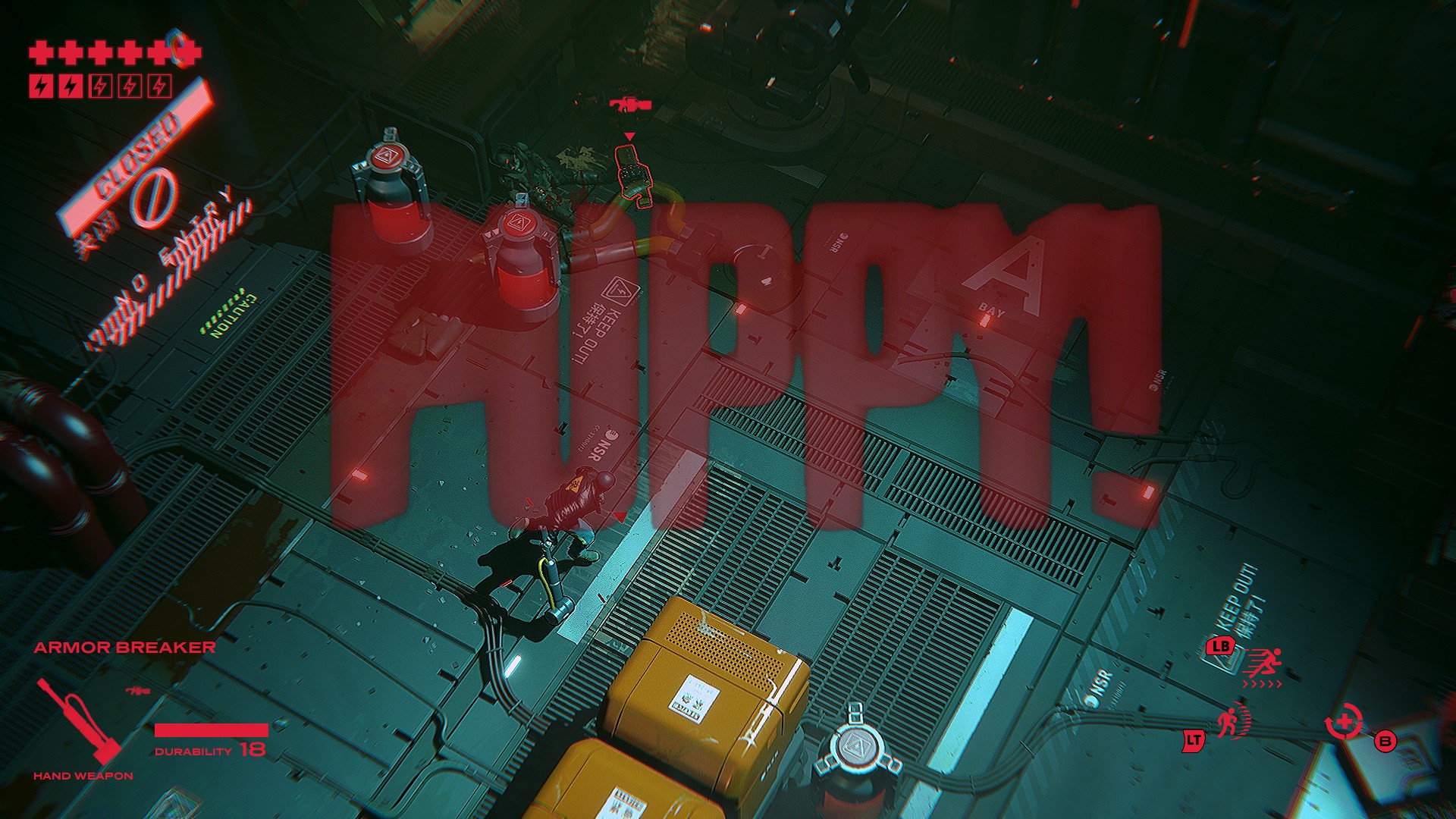 Enemies start off pretty simple, but they quickly ramp up, gaining player abilities such as the said same dash and directional shields, eventually being able to teleport, utilise grenades and other abilities over and above what the player has, more critically, they will always carry better weapons than the player has so it’s vital to keep yourself armed with something useful (assuming you didn’t buff the RUINER gun). Dipping back to something I mentioned earlier, this is where I felt the hub area could have done with some love, the ability to buy “upgraded” ranged weapons such as unlocking a permanent TAS-8 or Vector by the second major complex and then unlocking the Xaar or HF-Blade for the third major complex would have lent to the sense of progression and would have taken some of the spikes out of the difficulty. Customization through different jackets would have also been a nice touch.

Do I think however this takes away from the game? No. Not really, this is one of those “Buy it you fool” type games, because it really is that unique a setting and the lore really does stand out that much and the soundtrack really is that great and whilst it does cleave pretty close to Hotline Miami, it’s different enough and vibrant enough that it stands alone, in the dark and drenched in the blood of the dead and dying, red lights screaming “KILL YOU” all around it.