A game that proves something, whether or not on purpose: there’s more to Metroid than meets the eye

There’s no way to ignore Metroid’s influence on A Robot Named FIGHT! I try to judge a game on its own qualities, but it’s impossible not to notice the similarities. Fight feels and plays exactly like Samus in Super Metroid. You spin like Samus when you jump forward, you aim up and down like Samus, you crouch like Samus. This isn’t a bad thing because Samus felt great in Super Metroid, and Fight feels great here. However, problems arise when the game seeks to not only emulate the feel but the structure as well of games like Super Metroid. 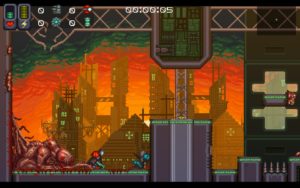 To the game’s credit, it does generate a properly built interconnected world. It is, by the end of a run, a complete Metroid map. Sure, each room is of a pre-built format, but it serves the form for this game. The premise is that you, a lone robot on a planet of robots, must fight the “meat.” Enemies are dynamically designed, if a bit ugly to look at, and the combat is snappy. All enemies look like big flappy flesh monsters, with a few exceptions. You’ll come across an area boss occasionally, all of which are fun to fight. I do like how the game handles “saves”. A save station functions basically as an extra life. If you die, you’ll respawn back at the save station. This is a smart way to give the player a second chance, especially in the context of a game with a lot of space to cover. 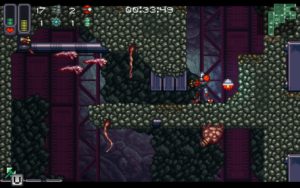 Being designed like a Metroid game, the world map becomes large and sprawling. Runs can be too long and lost too quickly to feel satisfying. You can be in a run for well over half an hour and not be too far in before it’s all over in an instant. Sure, that’s the idea of a rogue-like, but runs more often than not felt like sunk time. Occasionally, you’ll unlock a new permanent upgrade. Dying always feels super disappointing, because you know you’re going to have to do the same things every time: find a gate, get one of a few upgrades, use on said gate, fight a boss, drop into a new area, etc. This is a caveat from the random generation. Upgrades are consistently the same for the sections, so it becomes repetitive and unexciting. You always collect the same subset of weapons and upgrades in the first section: missiles, charge beam, flamethrower, etc. It felt like I was just playing the same game over and over again, but without a normal save slot. 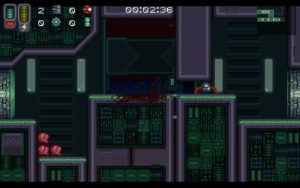 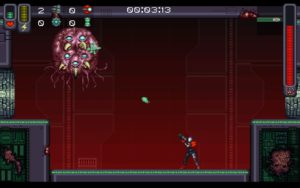 It’s weird because ultimately I think A Robot Named FIGHT! is a fine game. The game plays well; it’s put together fine. But every time I played a run, it just felt like a bland Metroid. Yes, the game has succeeded at emulating the Metroidvania structure of an interconnected world within the confines of a rogue-like, but it fails to realize that the structure of those games was only a fraction of what made them so good. When these maps have only the cold generation of a computer, they lack flavor and heart. It’s a Metroid game in shape, but something was lost in its spirit. 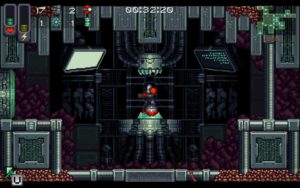