REVIEW: Archaica: The Path of Light

A lasers puzzle game cranked up to the max! Awesome graphics, extremely wide range of difficulty and tons of variety.

The first thing that strikes you when you start up the game is the gob-smacking beauty of it. It’s like a UE4 game which is totally unexpected in the puzzle genre, for me at least. It’s all in 3D and you’re introduced to the main menu by a camera panning cutscene that glides you to the exquisitely-lit stone monument where you can select your levels. Here there is also a Totem that records your achievements by activating each stone block that lights up with a blue glow. 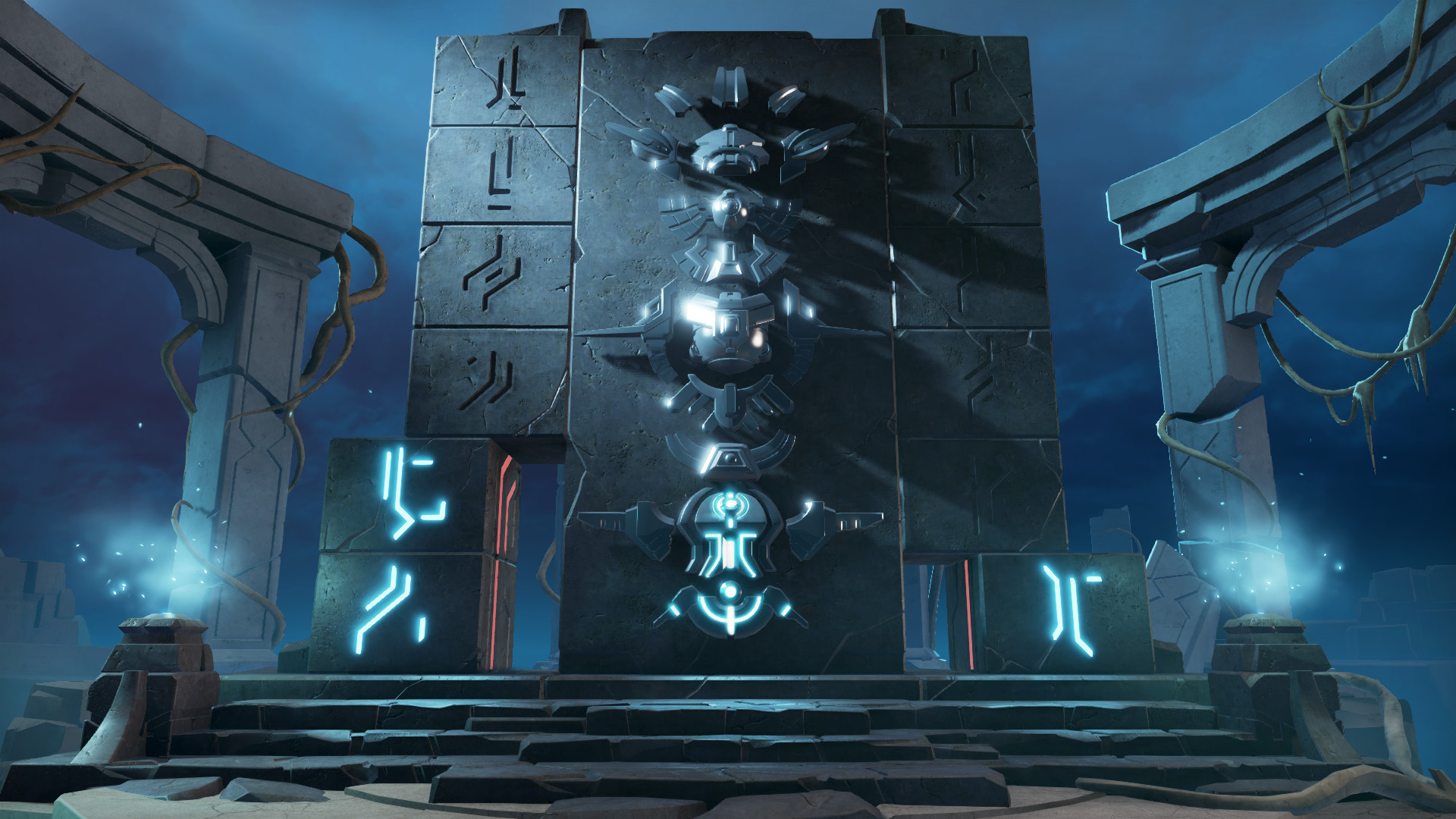 You click Play and the next uncompleted level is loaded. Every level starts with an appetizer of an easy hidden object game. There are 2 or 3 white crystals to find and usually (not always) Cryptoglyphs (half-buried glowing tablets). The crystals activate the hints; the Cryptoglyphs show you a short cutscene and a poetic verse of some ancient lore involving battles, pseudo-historic events and so forth. Once in a while it will refer to the mechanics of the level you’re about to attempt. This part of the level is always very easy, you drag the scene around to find the objects, and the area is not very large so it rarely takes more than a minute or so. Then it’s on to the main course with the lasers.

If you’ve ever played Lara Croft GO, you’ll find the level layout very familiar. The puzzle is totally different, of course, but you drag the scene around in the same way; hidden object aspect is the same, the board grid is the same and even the environments could be swapped between the two. I had to double-check to see if it was the same developer, but no. Anyway, I’m not complaining, it’s all very pleasant. 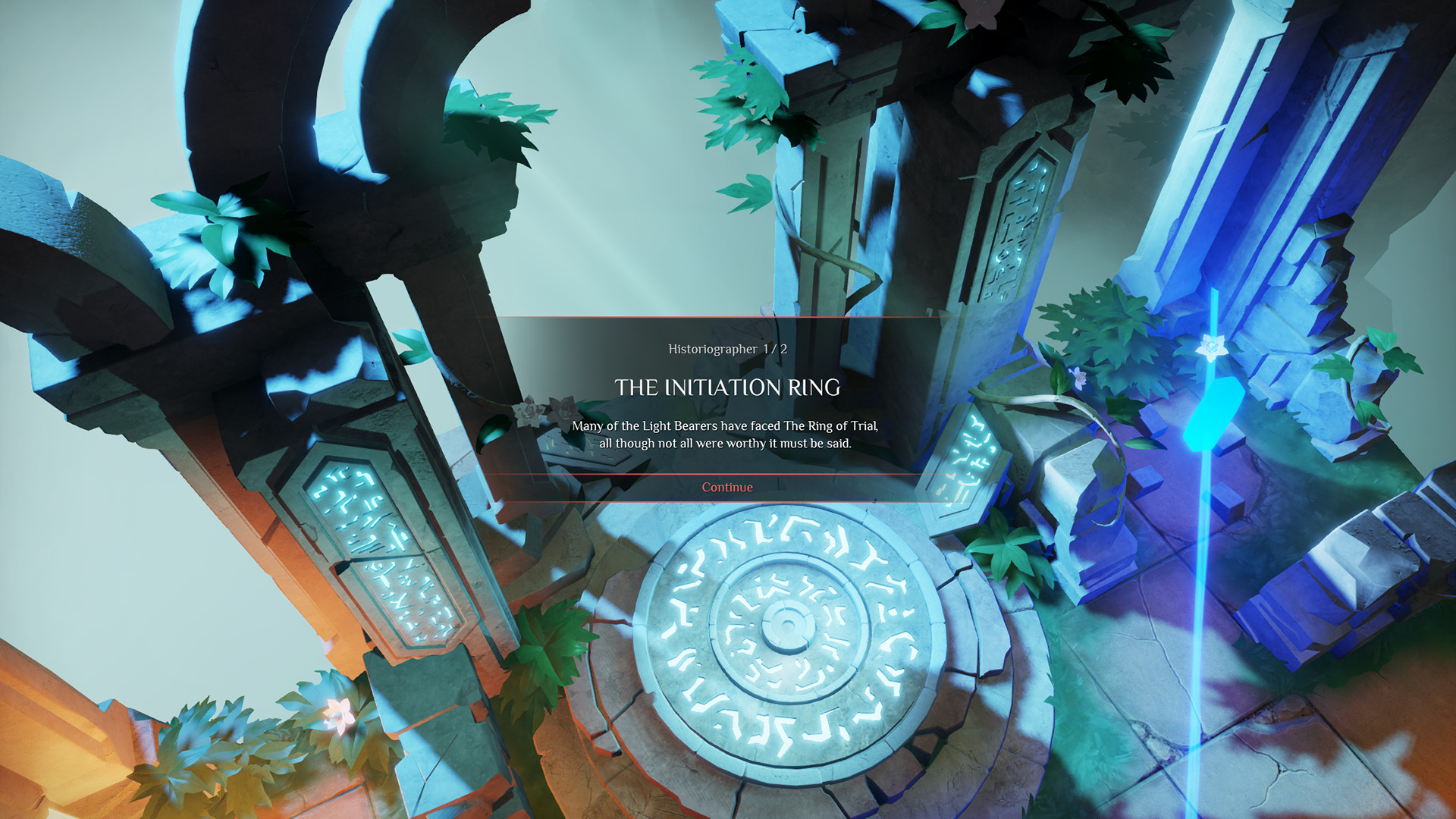 So you’re presented with a grid containing a number of mirrors (there are 90 and 45 degree types) and various types of tools such as power boosters, colour-change crystals, beam splitters… there are at least a dozen different types, and more are introduced as you progress. The goal is to position and rotate these items on the board in order to guide the laser beams to light up the exit crystals with the correct colours. Blending and splitting the coloured beams to get the right colour is often necessary, so the obvious route is rarely the solution. For example, in the early stages I would position my mirrors in the spots where I expected them to be, switch them around and try various arrangements, then finally succumb to the hints… which would reveal the positions to be in weird places on the board that I never would have expected. It’s fiendish!

As you light up each target, a portion of the ‘solution circle’ lights up. When you’ve successfully lit up all targets and the solution circle is fully lit, you click it to trigger a cutscene and sometimes an animation of the stonework of the level moving around and taking you to the next level. All very slick indeed. 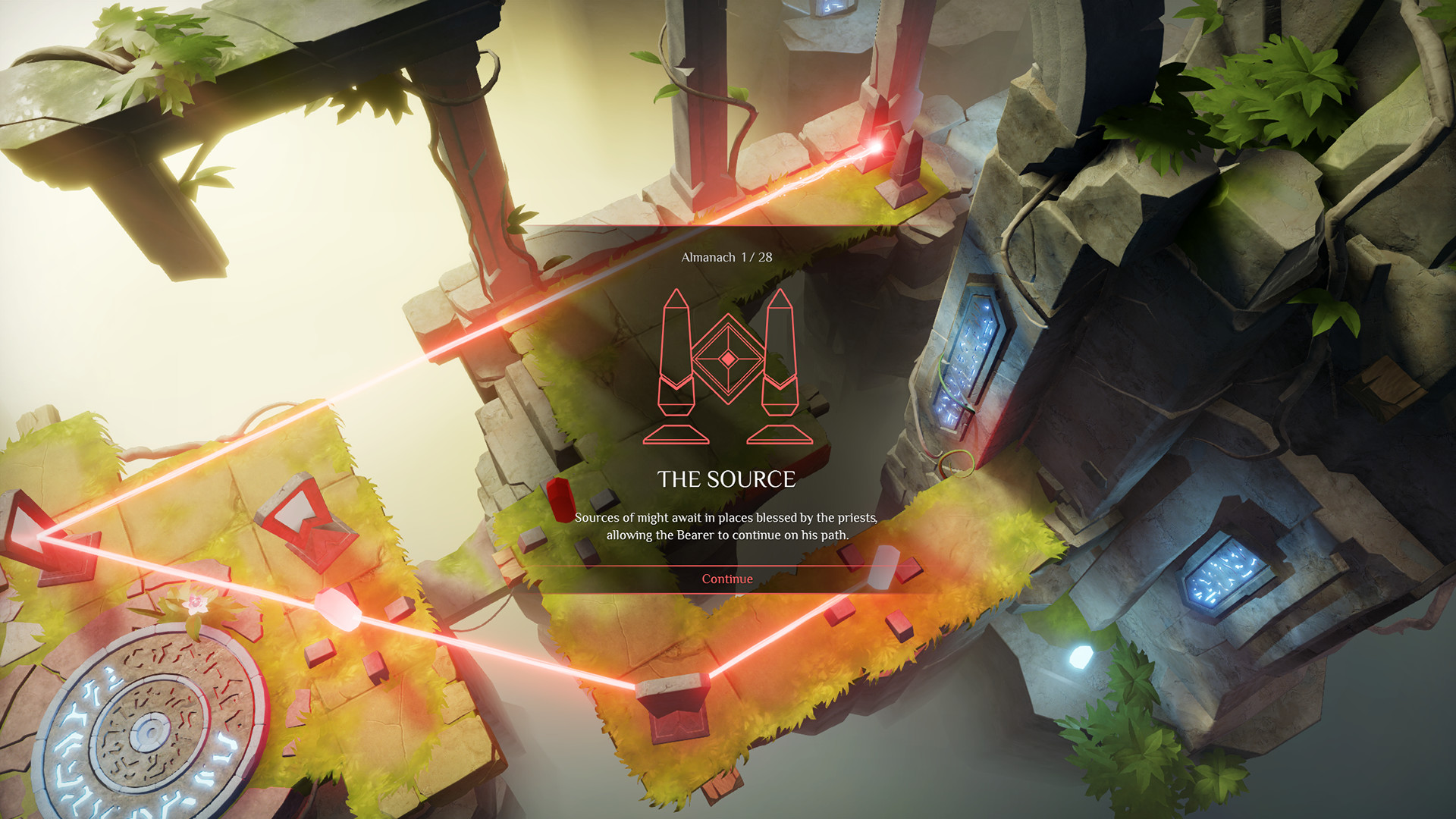 There are five main themed Areas: Desert City, Eternal Islands, Crystal Mines, Jungle, Temples and each is more beautiful than the last. It’s not exactly flashy and the levels have a limited area, but the use of lovely glowing colours, swaying plants, glittering water and so forth makes it feel so stylish and upmarket. The background music, if you can call it that, it also nicely understated so as not to interfere with your concentration. A gentle drumbeat, occasional chime or bird call to break the silence, no more than that. Every level has an imaginative and wistful name, there is no numbering here at all. 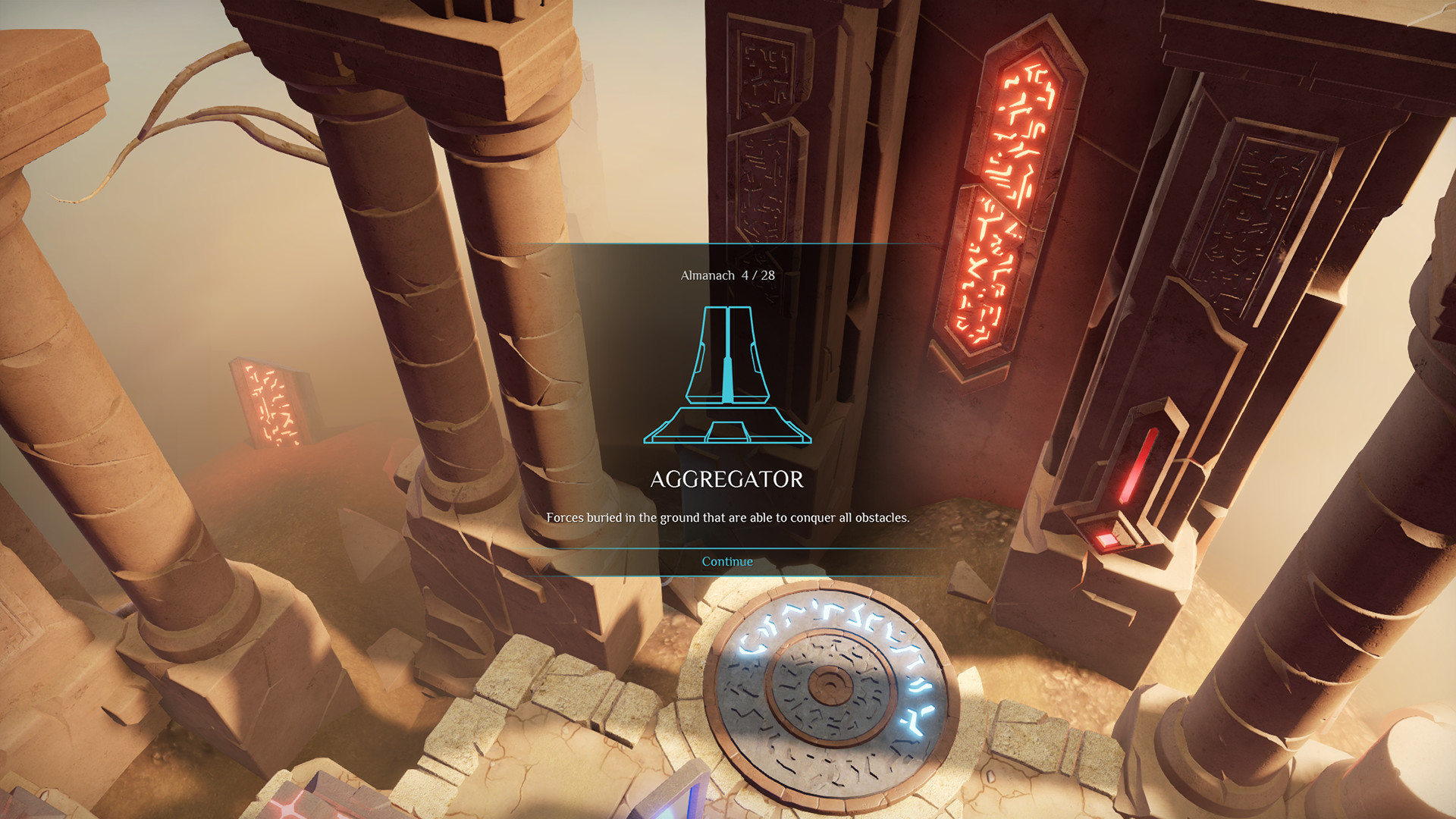 This is the type of puzzler I love where you can decide for yourself how hardcore you want to play it. If you’re a purist you’ll complete the levels without using the hints. I think I managed to beat most, if not all of the first area without hints. By the second area I started to struggle and was tempted more and more by the hints. By the third area my pride was well and truly in the bin, and I was routinely taking all hints immediately. After the initial 2 or 3 hints it forces you to wait for a while before allowing any further hints, giving you a chance to maintain at least some dignity. The thing is, even after you’ve mashed the hints circle to reveal the whole board you only have a set of positions. You still don’t know which item goes where, and in what rotation, so it’s still hard even with hints!

Some levels have bonus difficulty where you have to light up Stone Keys to reveal hidden levels. These are extra tough, and thankfully they’re optional so you can leave them for later. There’s an achievement for these, of course.

There are NO TIMERS WHATSOEVER within the game. A big plus for me! A puzzle should be a relaxing, thoughtful affair in my opinion – not an artificial race against time. 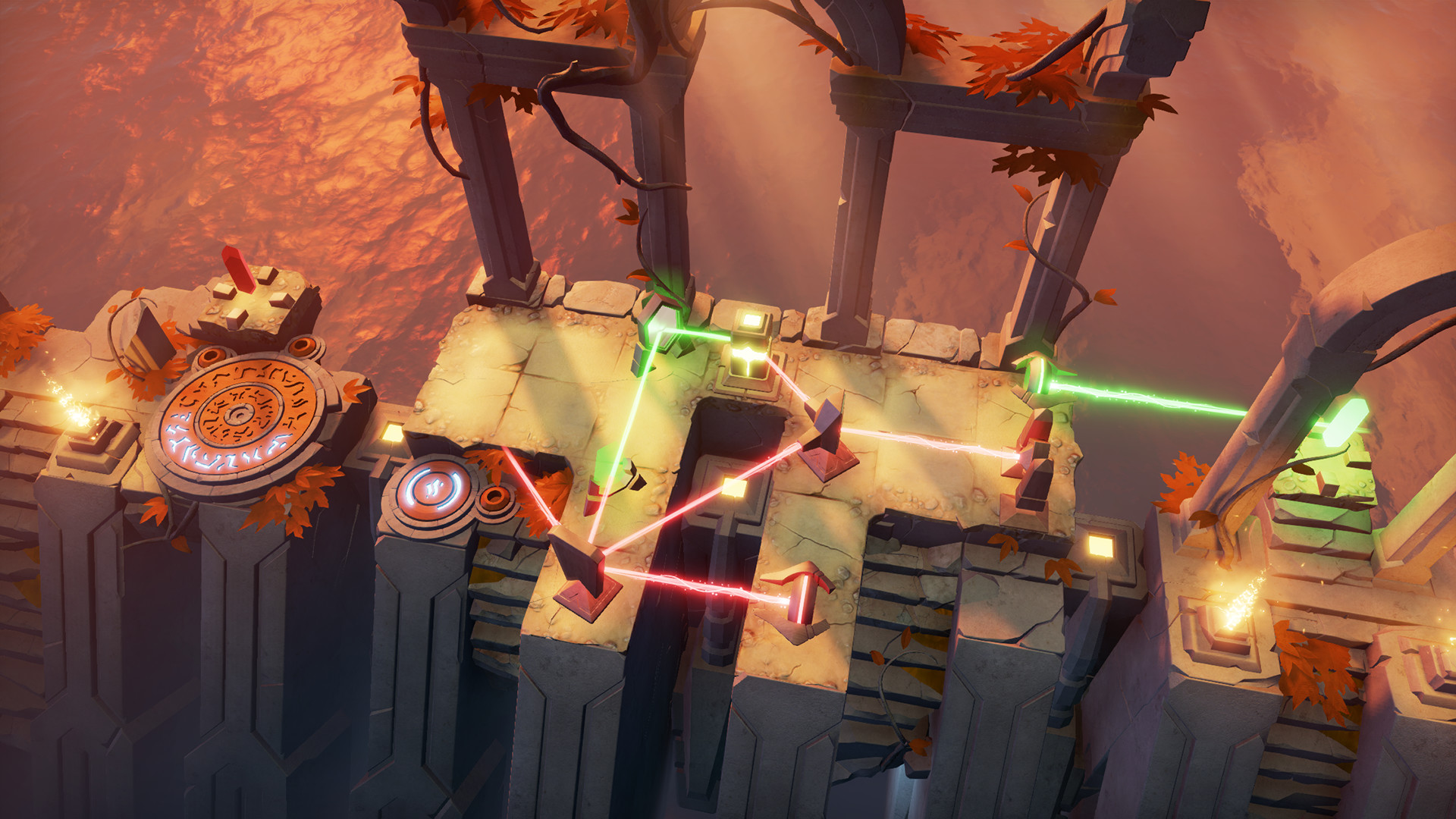 It has the lot – Trading Cards, Cloud Saves and Achievements – which are represented very nicely in-game as well as via Steam. There are no plans for Linux, unfortunately, which is a bit of a disappointment for me in an otherwise perfect game.

I know what you’re thinking. This is just a lasers puzzler, it’s going to get repetitive. I can honestly say that the game is packed with variety and no two puzzles are remotely similar. Amazing to think how much has been done with a seemingly limited mechanic. There are 62 puzzles (in 42 levels) + secret levels and additional puzzles needed to unlock them. By the time you get past the first couple of areas, you’re talking about a good hour or so to beat a level, especially without hints, so I’d say this is well worth full price. 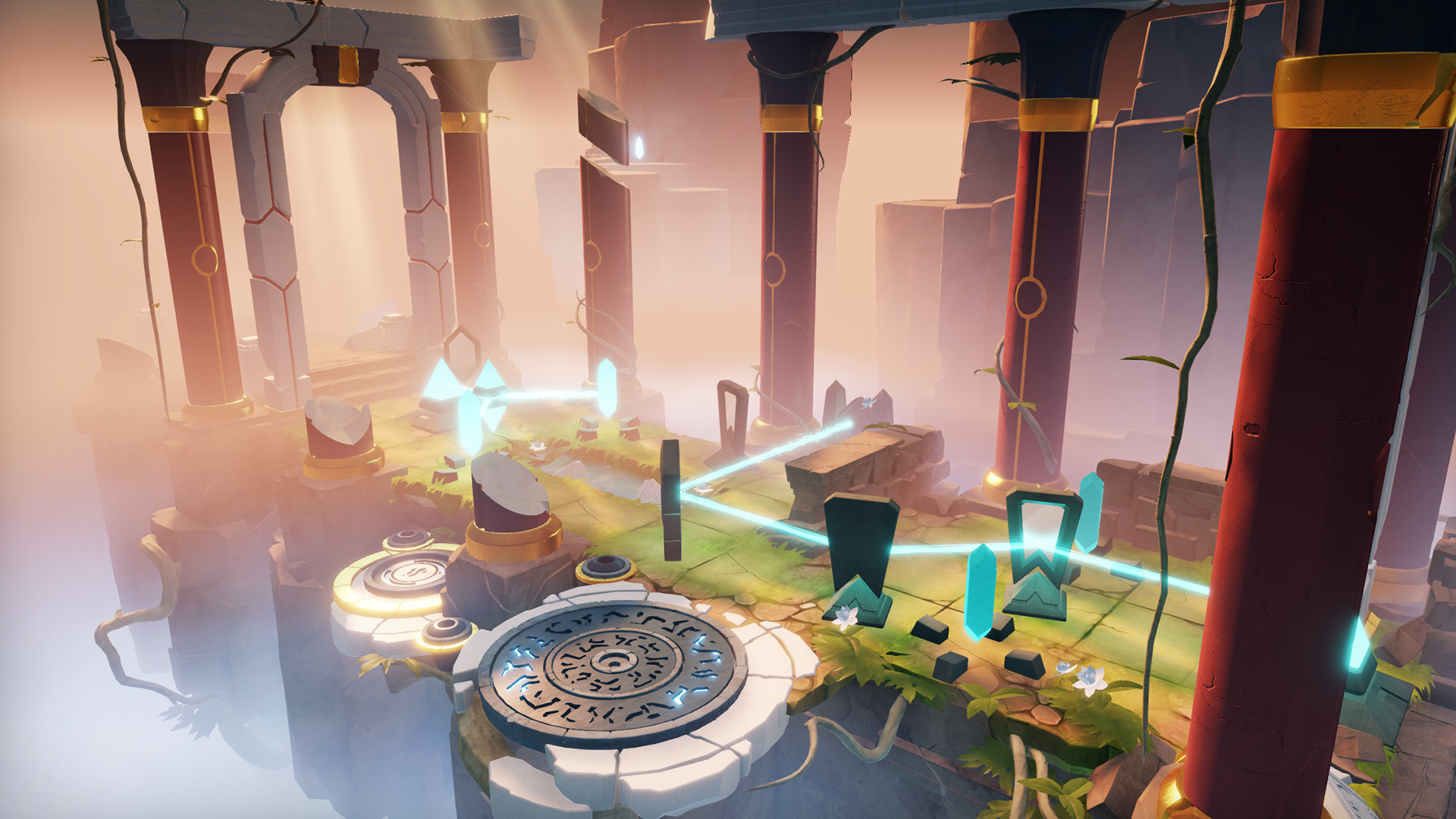 There’s one word for this: classy. Every aspect of it has been expertly crafted and the result is a lavish feast of puzzling, fit for a king… or pharaoh or whatever they’re called in this lore.

A top contender for my puzzle game of the year. 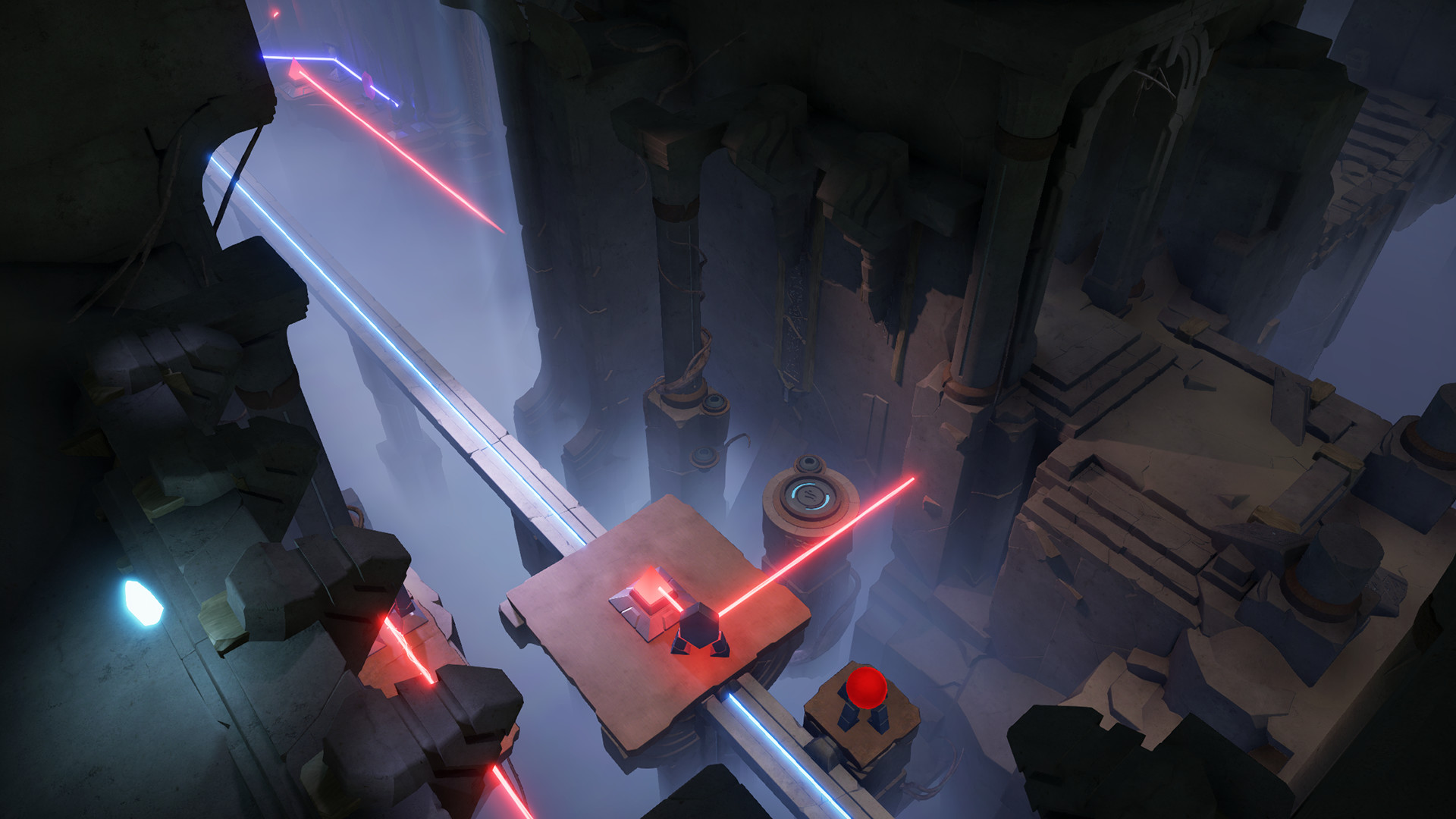