Looks aren’t everything, but they don’t make the experience any better

It’s important not to judge a book by its cover, so let me be perfectly clear: Toricky does not look good. Toricky looks like a deviantArt profile transferred into the Unity engine. The colors are garish, the art is ugly, and half of the UI is mysteriously cut off at the edge. There’s no way around this. Toricky looks bad, and half the screen is mysteriously cut off. But let’s look past that. So the game looks bad, fine. Some of the greatest games of all time look bad. There’s a lot more to a game than that. The music, for example, is pretty nice, and the story is simple and silly, something about crystals and goddesses and pig pirates, and the game seemed to lay it on a bit thick for a game of this sort, but it’s inoffensive enough. Localization features dialogue such as: “It’s round?” “Indeed, it is… round.” It’s kind of endearing, frankly. 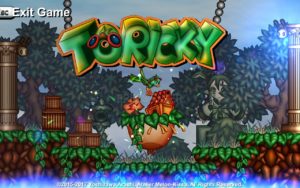 As for the gameplay, Toricky is based around gathering “crystars”, these little collectible MacGuffins in lightbulbs that are scattered around the level. They usually require some exploration or some light puzzle solving to figure out. Crystars are used to open doors and advance the story. Each level has a multitude of crystars hidden inside it. (They function like stars in Super Mario 64, to keep it simple.) Because you have to return the crystar back to a checkpoint, every level is basically a fetch quest. The level instantly ends after you return a crystar, which means you can’t get several in one go, you have to start over every damn time, and you start at the same checkpoint every damn time, and fly and open the same gates every damn time. It’s repetitive and annoying to do this over and over. It gives you a time stamp for your run, which might encourage speed-running, but I can’t imagine wanting to go back and play any of these missions again. The game cycles through day and night, and to the game’s credit, this does actually serve a mechanical purpose (some things only occur at certain times of day), but the primary cause is just to make the visuals less appealing and less parsable half of the time, as they’re drenched in black as you fly through these flamboyant levels. 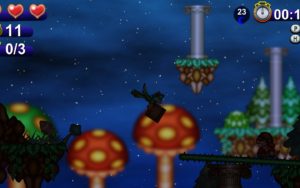 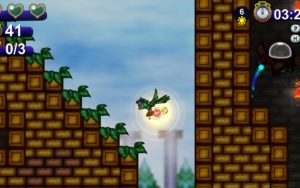 Most crystars are hidden behind some form of puzzle. Occasionally, there are boss fights, as well, but the primary gameplay loop is exploration. The puzzles to get your crystals aren’t particularly great, either. They’re generally basic rote or a simple exploration of areas. This isn’t inherently bad, but the act of exploring itself doesn’t feel very good. The trek through these areas will take you past enemies, which, for a while, you can only combat by picking up and dropping objects on them. For a while, I was completely stuck. I had checked each level and around the hub area, and couldn’t find a way to advance. Eventually, by chance, I stumbled onto some fake blocks I could fly through hidden within the hub area. This wasn’t a fun little secret; this was a necessary discovery to continue the game, within the first hour or so. Pardon my French, but: that’s bull hockey. The whole game is filled with this feeling of aimlessness. Collecting these crystars doesn’t feel good. It feels like a chore, another reason you have to fly blandly through these multi-colored environments. 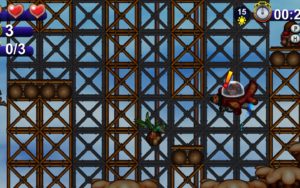 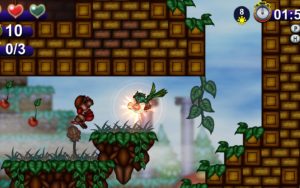 Flying just doesn’t feel that good, either. Moving up and down and around feels awfully twitchy. It feels imprecise, but most of all it just feels… empty. You turn on a dime, which feels ill-fitting for a character who is entirely airborne. Your character flies in an arc, sure, but there’s no reason to go through this arc when you can just mash the directions you want to go in. If you kill an enemy and start flying down, you can die on a dead enemy. Your only method of interaction with the world is picking up or dropping objects. On one hand, this creates a clear line of thought for problem solving. On the other hand, it makes play feel incredibly limited. The whole game feels wrong. My actions don’t feel connected to those of Toricky’s. This, along with an unsatisfying gameplay loop, makes the whole game feel just not worth the effort. 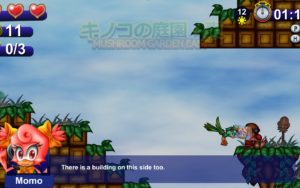 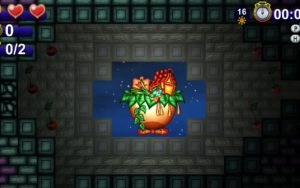 I think what bums me out the most about Toricky is that there was clearly so much love put into this game. The Japanese indie market is a somewhat elusive scene from a Western perspective, and I, personally, am always excited to see what comes out of it, and ready to support it. The developer is responsive to its players, communicating with them and updating, and the art, as unappealing as it is, is all handmade. There are a multitude of language options. The voice actors are clearly putting energy into their lines. Anything from a developer that would indicate a commitment to the project, it’s here. It warms my heart in the same moment it breaks it. They had a vision, and they aimed for it. The devs cared; they really cared. But all this motivation and passion doesn’t translate into good game design. 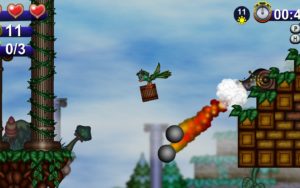