3030 Deathwar Redux is an open world space exploration game that mixes a lot of elements from various other space games into a nice little package.

The game’s main focus is split between the space exploration, and a pretty enjoyable narrative and overall storytelling. The narrative is, for the most part, delivered through text dialogue between characters and it has a pretty good sense of humor, but you can also check the current news at a space station, as well as chat with random strangers and watch TV. Sometimes you’ll spot a reference to a popular game or some other thing, and characters also tend to make fun of certain cliches that are, unfortunately, rather popular in contemporary game design.

Now, in terms of movement and space travel, the game is rather simple, and if you’ve played other space games it’s very likely that you’re familiar with the concept of how things work here. Basically, you can travel at your ship’s normal speed and use afterburners when making short trips, but when you want to cover bigger distances, either inside a specific solar system or going from one side of the map to the other, you’ll engage a split drive which allows you to travel extremely fast. When doing so, if the distance is rather long and if you’ve been in this mode for a while, you’ll enter escape velocity, which shortens your flight time even more. Nonetheless, your ship needs to have a split drive in order to perform such maneuvers, which I believe most ships have, besides the starting one. 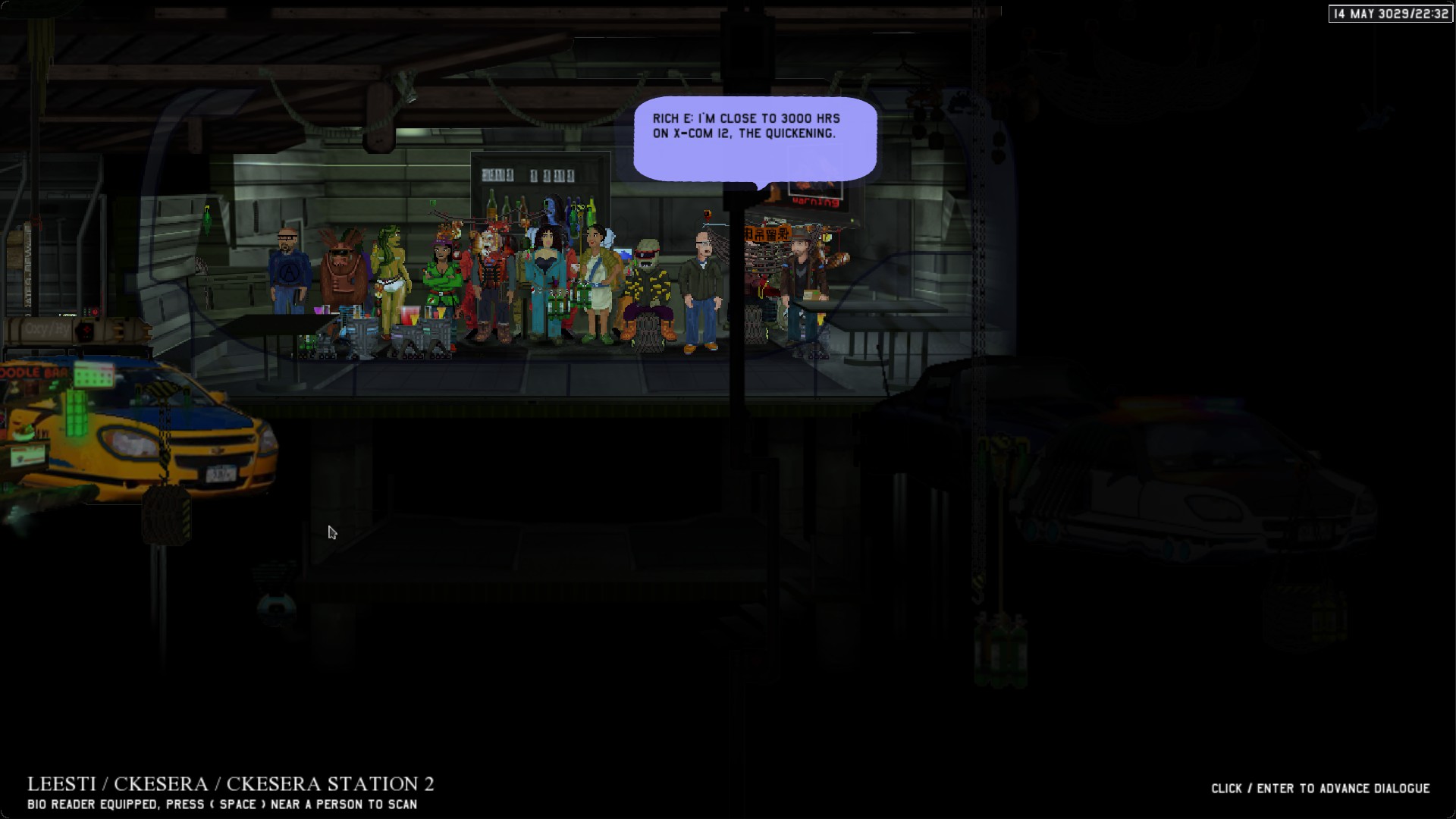 Much like the way moving around works in 3030 Deathwar Redux, the combat itself, including the way the ship handles, will feel very familiar to you if you’ve ever played Asteroids. Still, each ship has different characteristics such as the size of cargo hold, a number of people it can carry, if it supports turrets or not, the number of missiles it can hold, hull, turning speed, engine power, amongst a few other things. It’s a pretty in-depth system, and it adds a lot more to what, at least at first glance, looks like just a standard top-down space game. As for the weapons themselves, ships can support turrets, a front gun, and missiles which lock to nearby enemies, and that’s pretty much it.

Space stations play a vital part by assuming the role of a hub for the player’s activities such as trading goods, completing missions, interacting with different characters, taking on new missions, refueling, and purchasing upgrades for your ship, acquiring a new one, or repairing your current one. By going to the jobs console you can check the available missions, how much each of them pays and where the objective is located. In any case, these missions don’t offer much variety in terms of goals, as they’re pretty much only used to earn credits, the story missions are where the real meat of the game is, with all the main characters interactions, puns, and whatnot. With that said, there are taxi missions, in which you’ll have to take one or more people to a specific place, assuming you have enough cabins on your ship to accommodate everyone, you have cargo delivery missions, hunting down pirates and destroying space junk. Besides all that, you can also explore and scavenge derelicts in order to gain credits. 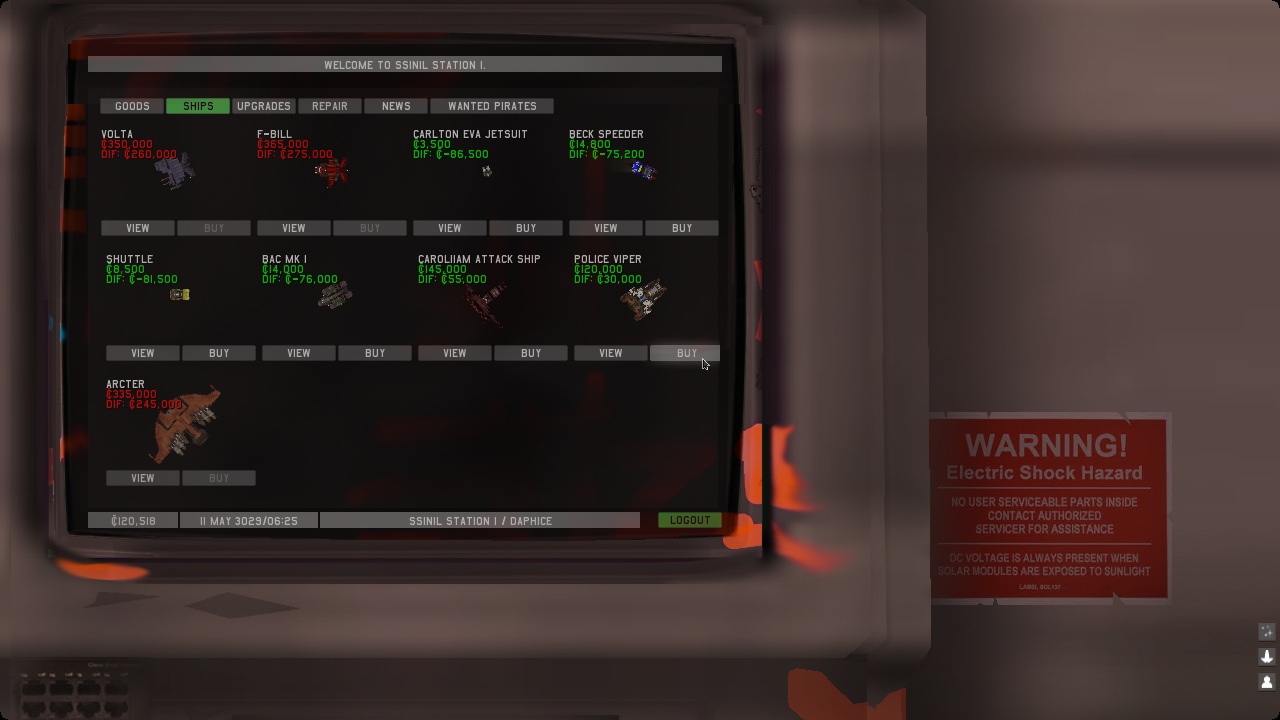 There are two things that I really like about the game and that I must mention, and these are the way it looks and the soundtrack. The art style is very peculiar but, while some people will love it, some people will likely dislike it for being somewhat outdated. Personally, I’m a huge fan of the vibe it has going for it, and the visuals totally look like they’re inspired by old adventure games like The Dig. Still, the animations for the salvaging sections and for walking characters look rather clunky. As for the soundtrack, I think it’s absolutely stellar, from the tracks that play while you’re roaming around in a space station to the ones that play when you’re traveling amongst the stars. It’s really hard to describe what they sound like, but it makes me feel extremely nostalgic for some reason

The game does suffer from one rather annoying issue, and that’s the fact that you can’t save while you have active missions. I find this to be a downside since I often found myself with missions to do in different zones, and having to go back and forth when I just wanted to save and exit the game can be rather bothersome. 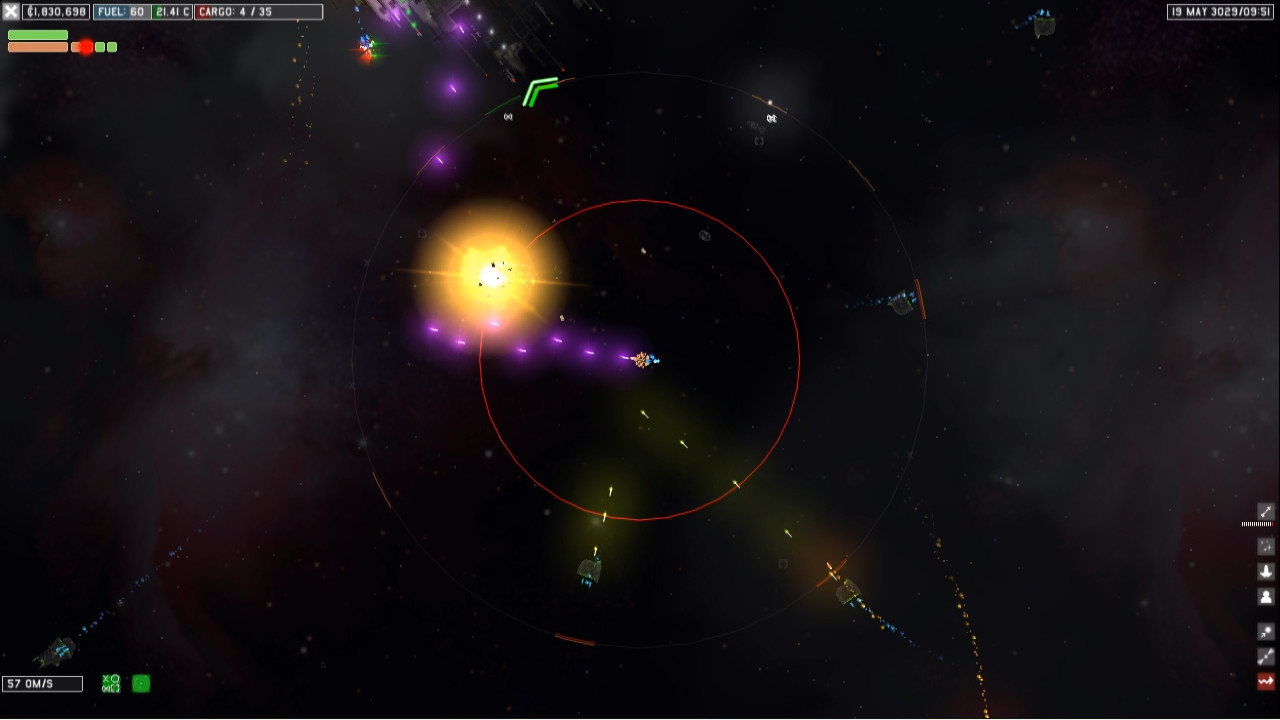 I think it’s fairly obvious that 3030 Deathwar Redux is a rather pleasant experience. If you’re a fan of open-world space games, chances are that you’ll very much like this one. Nevertheless, it’s worth noting that the game’s true charm is present in its dialogue and characters, so do keep that in mind if you’re planning on giving this a try. However, if you’re looking for something that has a lot of depth in terms of mechanics, combat, and missions, you might feel dissatisfied. In the end, 3030 Deathwar Redux offers more than enough content and entertainment for the asking price and it’s impossible for me to not recommend it.