Set in the arctic, Distrust is an isometric survival-horror game with rogue-like elements that focus on scavenging, cold, scavenging, psychoses, scavenging, and scavenging.

Distrust is the debut title from developers, Cheerdealers.

In Distrust, you take control of two polar explorers: survivors of a rescue team en route to an isolated Arctic research base. As the rescue team is coming onto land, a glowing ball of light appears inside the helicopter, causing it to crash. Only your characters survive.

Escaping the burning wreckage, you find your way inside a nearby building and start to piece together what has occurred. You soon find out that the deserted base has been overrun by weird alien creatures referred to as ‘anomalies’, which are only able to enter the world when you sleep, but which also suck the life out of anyone nearby. You have to scavenge what you can from the scant supplies left in the few buildings and find a way to survive as long as possible without succumbing to sleep and the anomalies.

Though Distrust‘s world is full 3D, the game is played from an isometric viewpoint. You can rotate the camera in 90-degree increments, which isn’t as useful as free camera rotation, but rather than just changing the point of view instantly, the view rotates through a 90-degree arc and settles into its final position, which looks rather nice. Zooming in is a bit too limited to be useful; increasing the minimum and maximum would be a good idea here.

The world looks very nice and portrays the desolate, lonely environment well. There are some great special effects and dynamic lighting, and lots of well-made objects lying about, though I’m not really sure why an arctic base would have all this stuff. Sometimes it’s hard to tell whether an object is a ‘special’ one with which you can interact or just a piece of eye candy.

Character graphics are pretty good, too, with smooth animations. The anomaly graphics are not that exciting, though; each one is just a floating sphere with some different textures and surface elements. They also don’t do anything other than wander around — very anticlimactic.

The interface is lovely. Icons are large and obvious and animate when you mouse over them. Tooltips are plentiful and well written. Portraits are nicely drawn and go through a small number of changes depending on the condition and mood; some are quite amusing when the characters are affected by a psychosis. Loading screens are varied and appropriate. 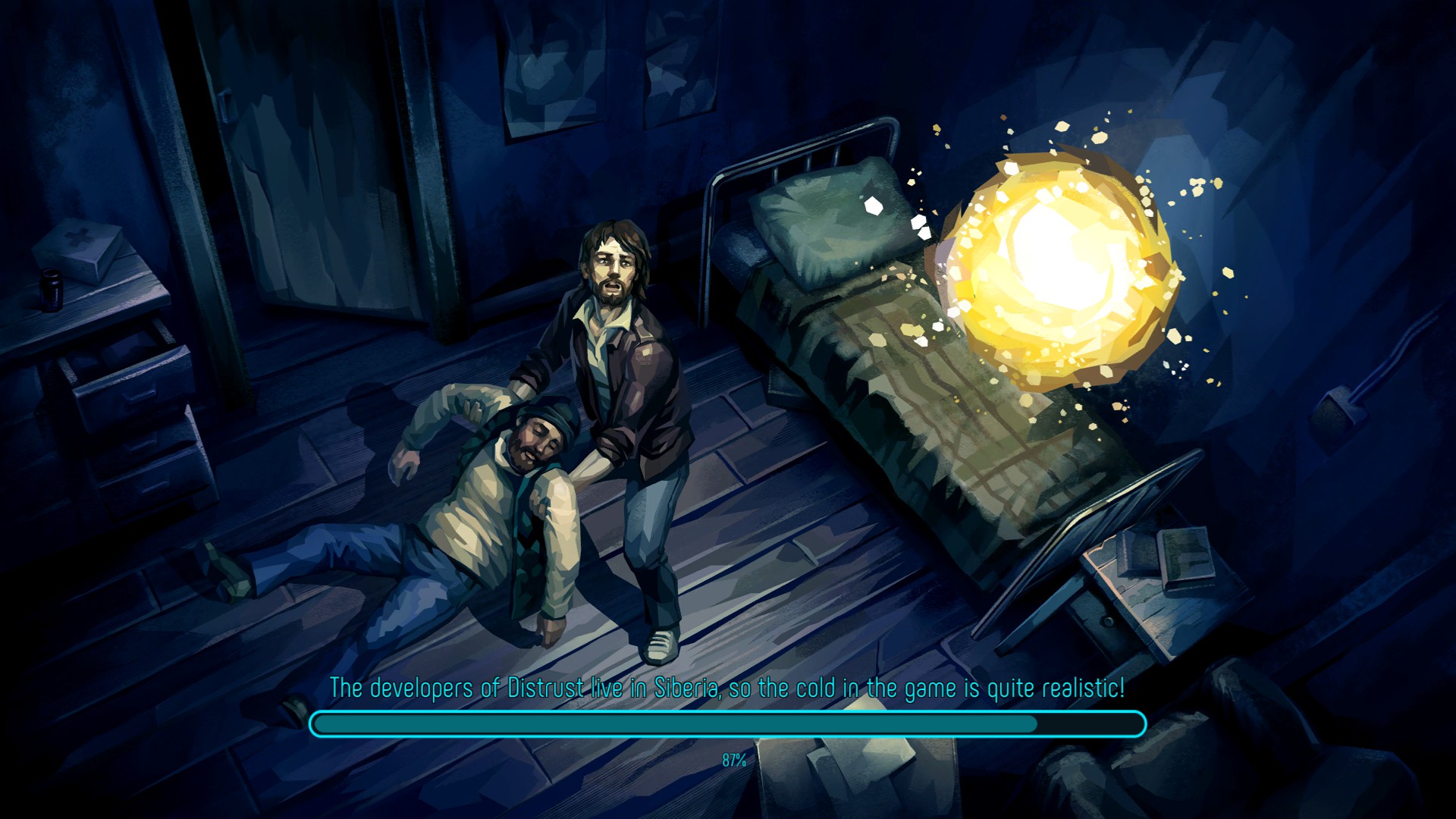 There are a handful of graphics settings including frame-rate limiting with a V-sync option. I didn’t experience any performance issues.

The mournful title track and in-game music suit the game well, helping to evoke feelings of isolation. I only noticed a couple of music tracks, but it could be that the developers have done a good job of blending a number of similar-sounding tracks together depending on the situation. It’s a synthesizer-heavy sound, but that’s not a bad thing.

Sound effects sound professional and appropriate to the situation. Some of the sleep-induced psychoses have their own sound effects, which are a nice touch. The laughter was particularly distracting.

There’s speech within the cut scenes, but not in-game. It’s heavily accented but professional.

There’s a short tutorial that shows you how the basic gameplay elements work. It skips some important controls (e.g. pause), but it’s otherwise very well made. Keyboard and mouse control the camera, while characters are controlled exclusively with the left mouse button: left click to move or hover the pointer over an interactive object in the world to bring up a radial menu to interact. The game includes two modes: adventure and trial. Adventure mode is easier, but doesn’t let you unlock every character or achievement or see the ‘secret ending’. Trial mode is where it’s at. 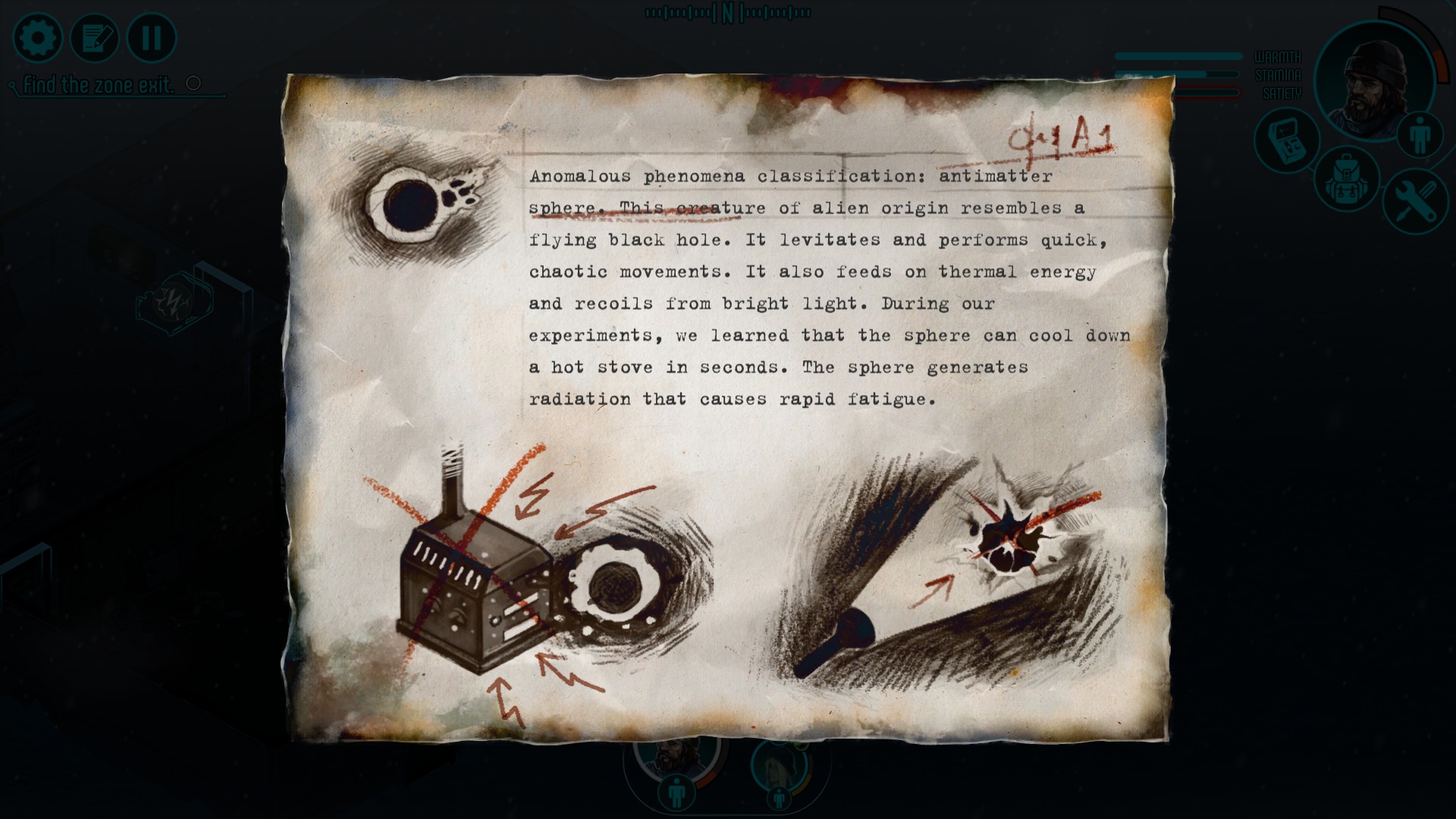 When you begin the game you have two available character slots and three available characters. As you gain achievements you unlock other characters and, eventually, a third slot. There are three base characteristics: cold resistance, walking speed, and running speed. Each character also has a unique passive ability and up to three starting inventory items. The tooltips tell you all about the options available to you, as well as how to unlock each locked character.

Starting the game proper gives you control over your two characters, virtually equipment-less in the snow next to the burning helicopter wreckage (which for some reason doesn’t give off heat — weird, eh?). You select your characters and begin your investigation, which involves entering buildings, clicking on interactive objects to search or examine them — always ensuring your characters have light and heat — and then moving to the next building to do the same thing again. You gradually amass assorted items in your inventory. 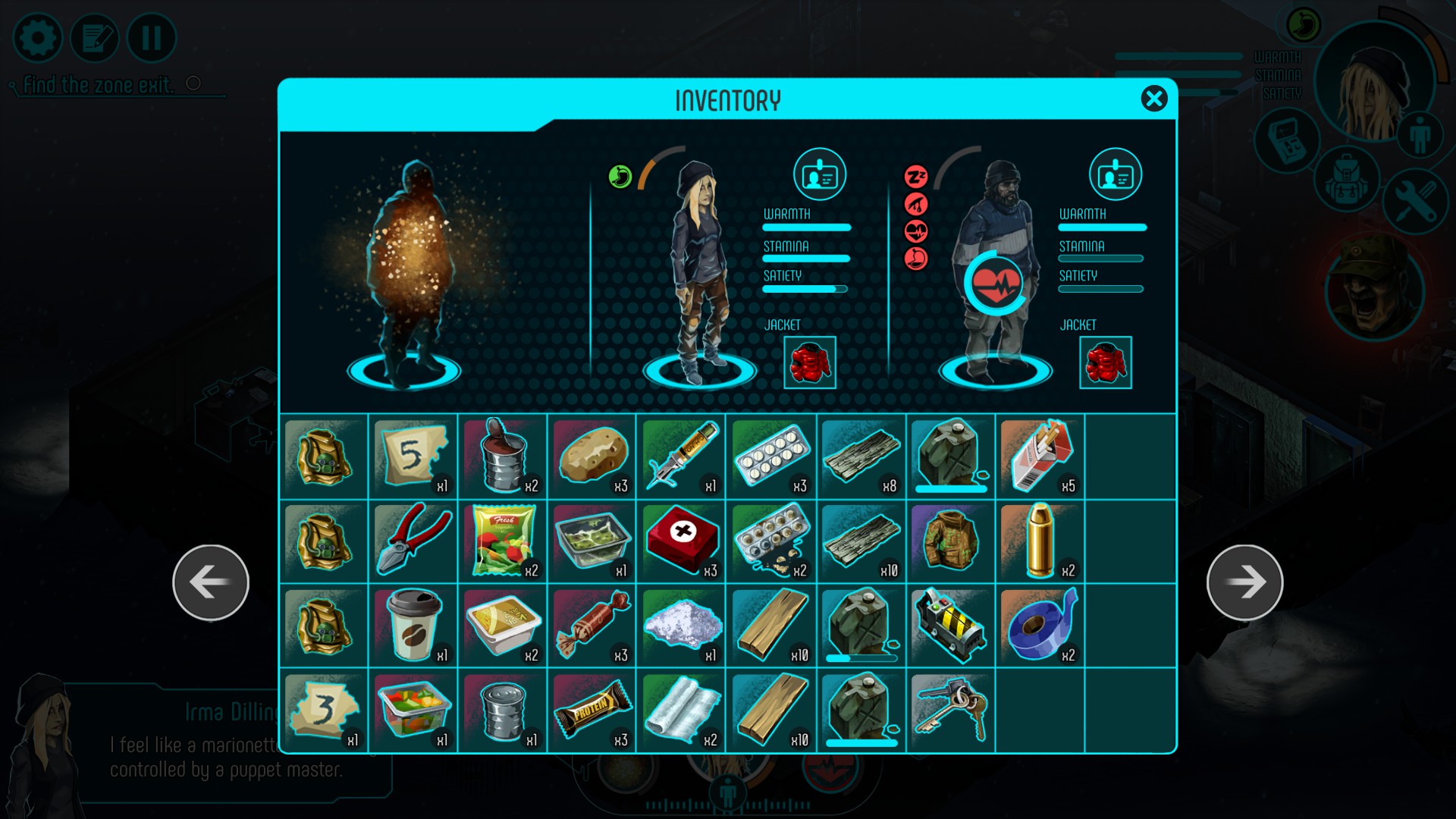 You have three basic condition meters: warmth, decreased in the cold and increased in a heated enclosed building; stamina, decreased while awake and increased by sleeping; and satiety, decreased by living and increased by eating. When any of these drop below a certain threshold the health bar starts to reduce. When health is completely gone you fall into a coma. If not resuscitated in time, the character dies. Once all characters are either in a coma or dead, it’s game over. 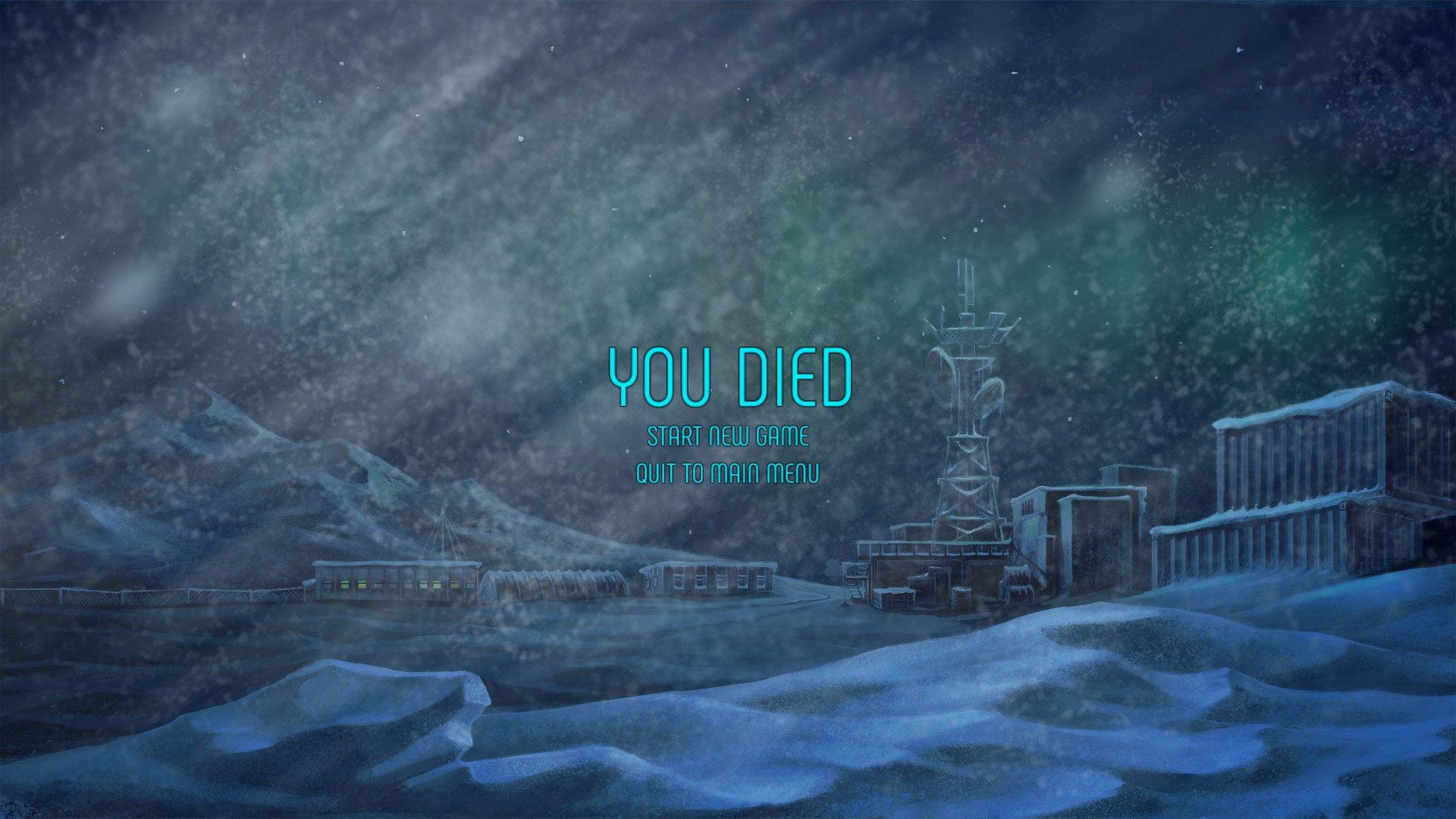 The game features an innovative madness mechanic when your stamina drops below a certain threshold, it randomly assigns a psychosis to the character. I think there are 19 psychoses with a huge range of effect; you might find yourself randomly selecting and eating food items from the inventory, quoting Shakespeare, or cursed by hallucinations. Many psychoses have graphical filters or change the sound effects. 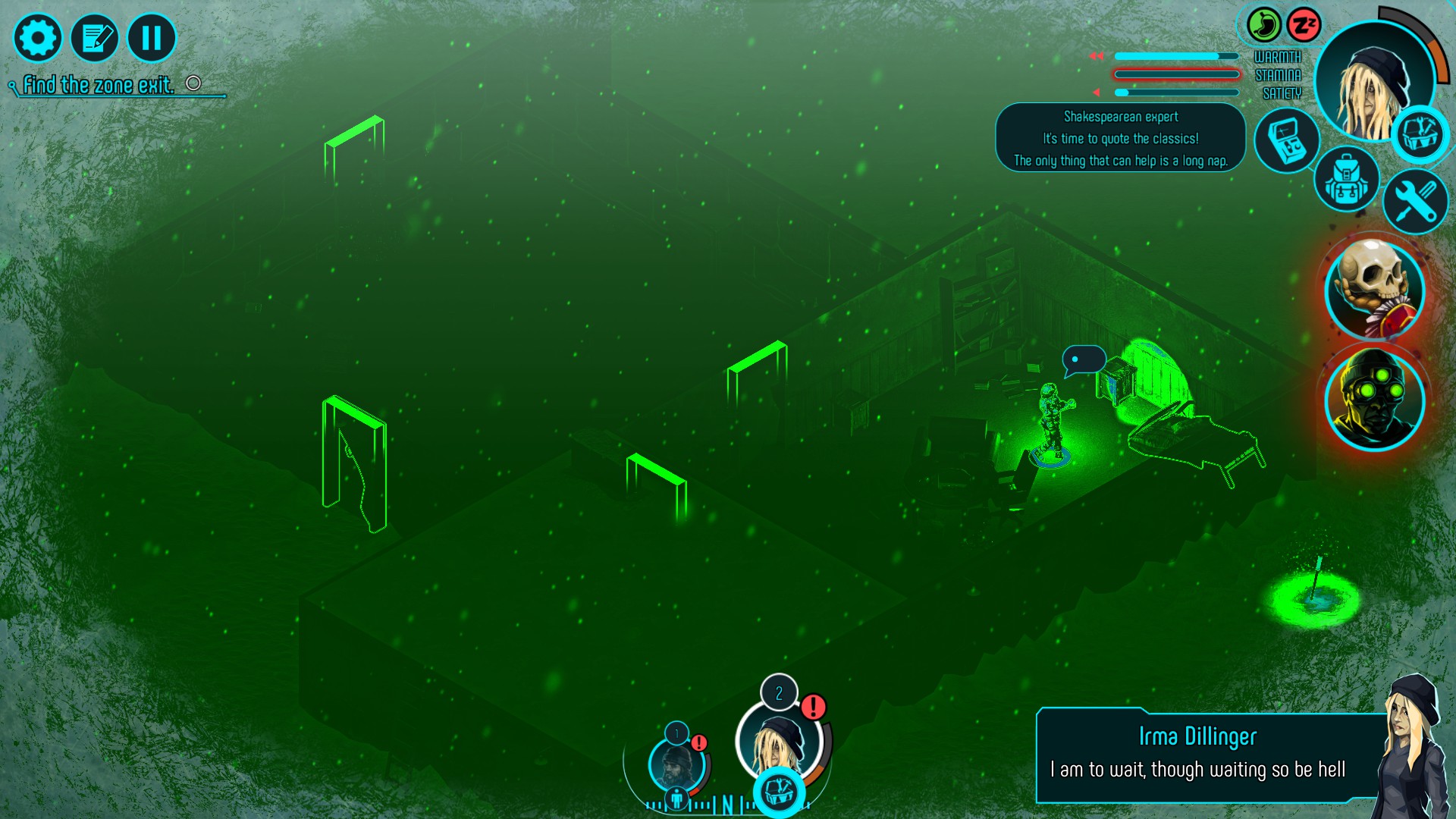 There are six procedurally generated levels, each within a fenced area of the base or its surrounds, with a randomly assigned requirement to open the exit: collecting keycards, flipping switches, and so on. Make your way to the final level to discover the source of the anomalies and see one of the endings. There’s an invaluable in-game map showing character positions and the buildings in the current level, together with their type (residential, medical, storage, etc).

The game has a number of disappointments, though. Foremost among these is that there’s just not much gameplay here; you spend the whole game moving from building to building and scavenging, but that’s it. Scavenging does get a bit boring after a while, and there’s no crafting, only very limited combat, and an enemy that is a bit naff. 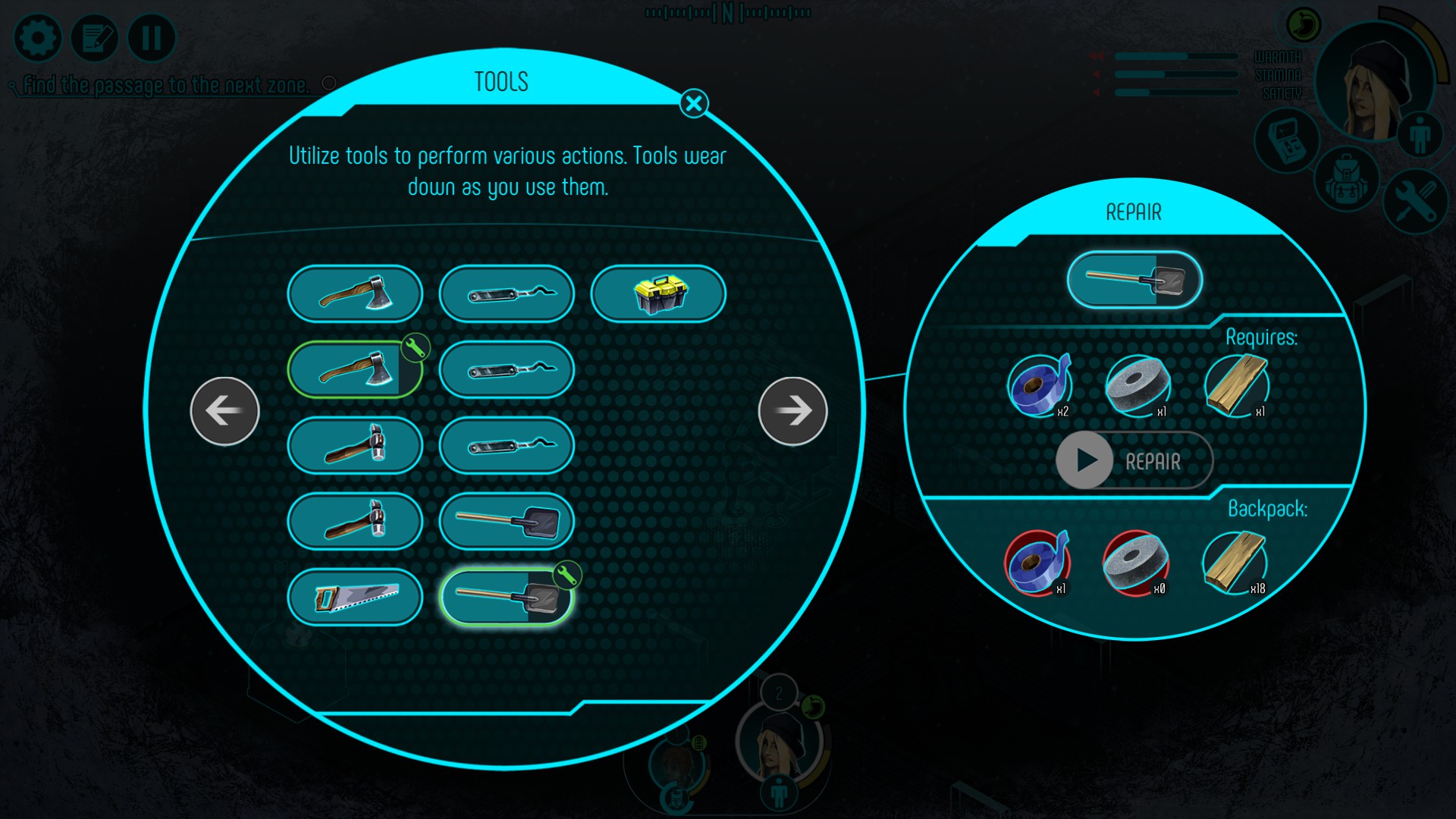 Controlling multiple characters seems great to begin with, but I found that it actually just drained resources more quickly and made the game less fun to play, so I often let one of them die early on and played with a single character instead. There’s not really any benefit to not being alone, which is a shame in a game with such an isolated setting. You also have no direct control over character movement speed; it’s very frustrating to watch your characters die because they refuse to run indoors. 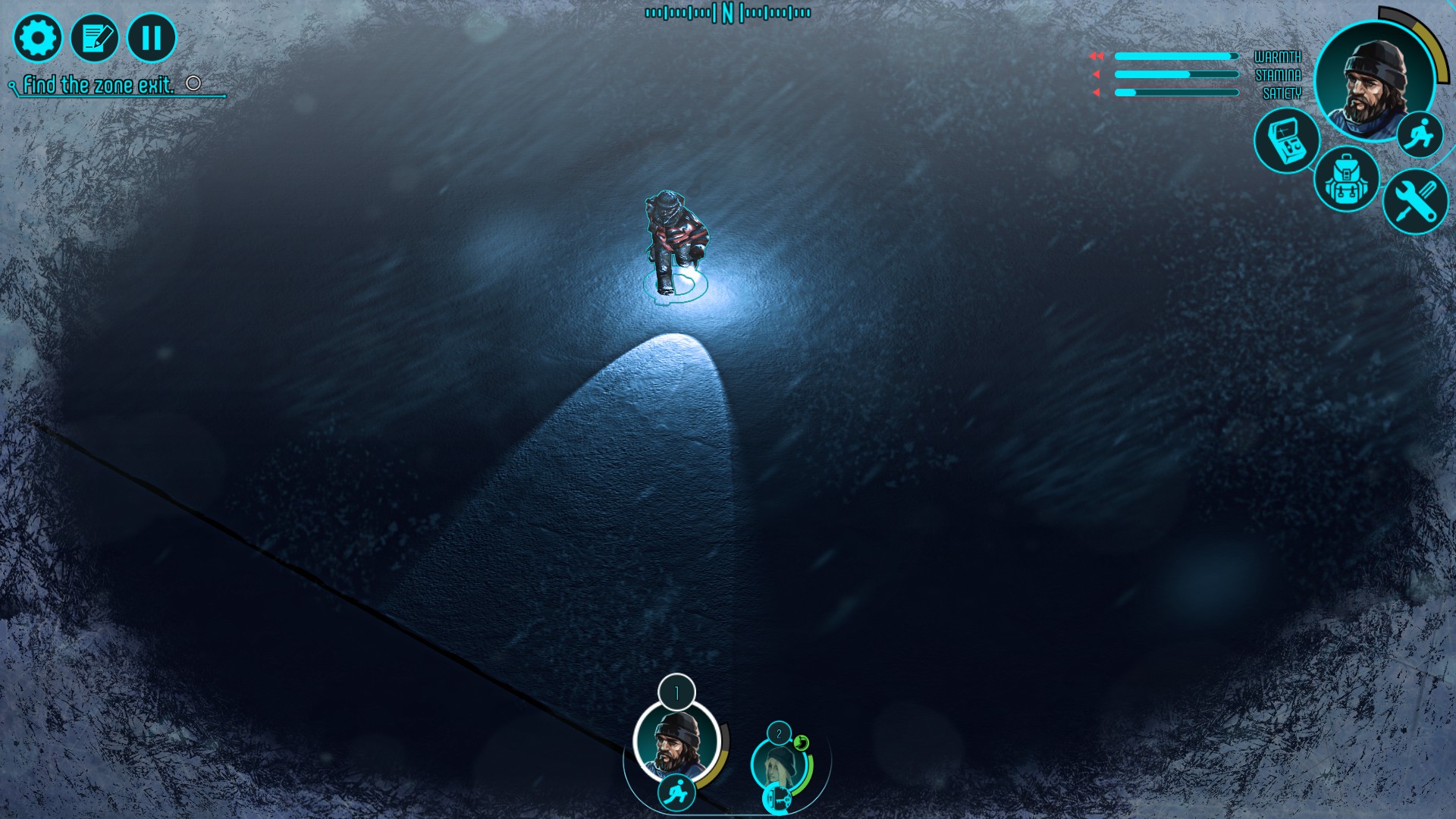 Finally, you can only interact with a small number of things in the game world; everything else is just static, even if it looks like you should be able to do something with it. Want to use that axe to chop up that nice bookshelf and burn it for heat? Bad luck — you have to look for a crate. What about that pile of crates in the corner? No; it has to be a specific crate … . 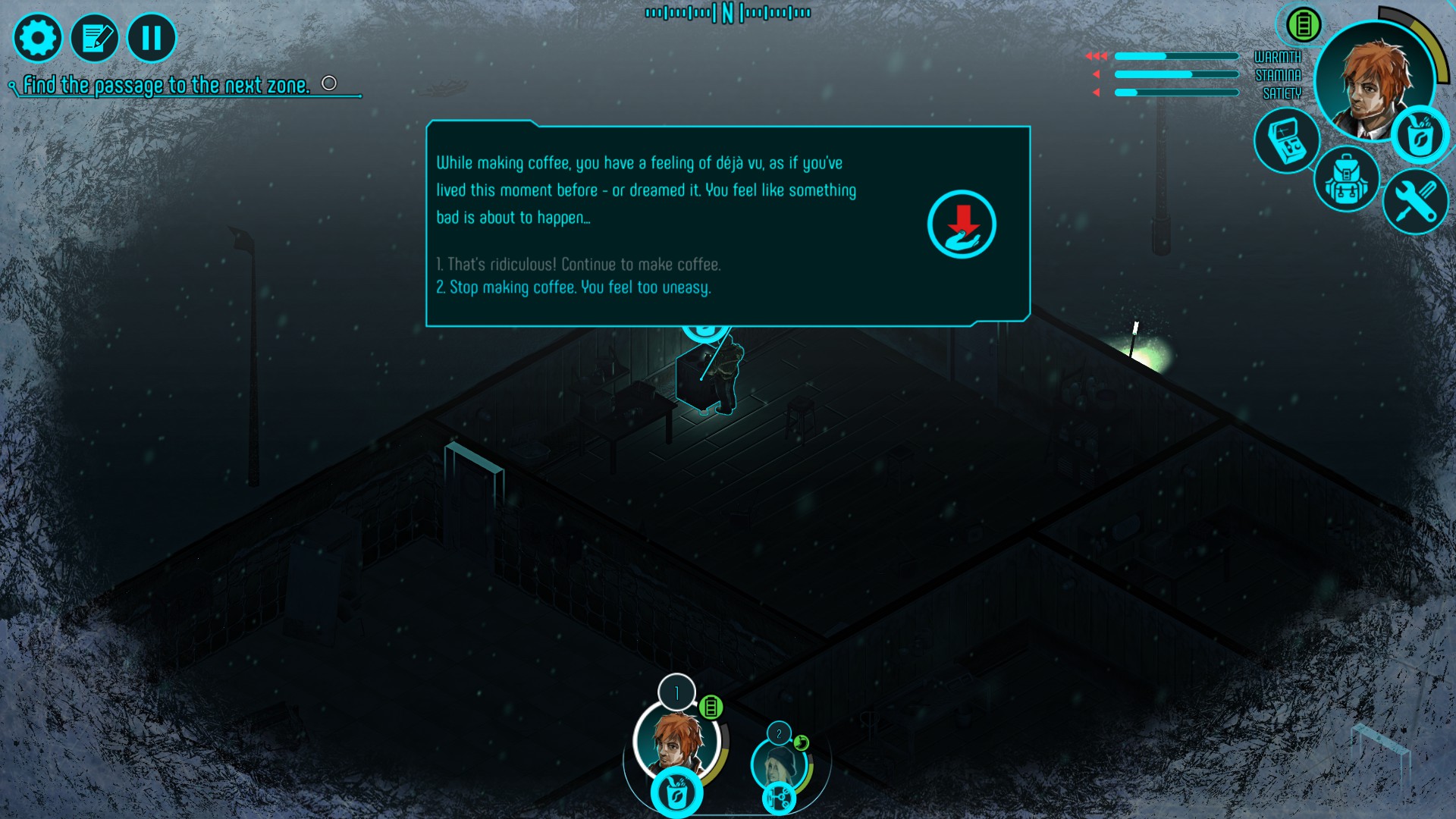 Distrust does a great job of portraying the atmosphere of an isolated arctic base and has some wonderful game design elements. There’s also a good number of unlockables and procedural generation, enhancing replayability. But when it comes down to it, the actual gameplay is rather repetitive. It could be so much more!