Wrongworld is a science fiction survival-crafting-sandbox game where you play as a big teddy bear who likes to headbutt trees. Sound good? It is!

In Wrongworld you play a weird teddy-bear-like creature who, as it seems to be the case in every survival crafting game, was traveling through space when its ship was damaged, causing it to crash land on a strange planet.

The game starts with you weaponless, foodless, and everything-less, stranded on an island inhabited by other weird creatures. You have to hunt, grow crops, build stuff, and defend yourself in order to survive. Though I’ve not yet done it myself, I get the impression you can actually build enough cool stuff that you can get off the planet again.

The graphics in Wrongworld are 3D, with a simple, cartoonish style: low-poly models with sharp edges and brightly colored, flat textures. It’s all done in a consistent style and I have to say that it looks rather nice.

The days pass quickly in Wrongworld and the day/night cycle is particularly well done. The sun is a great ball of fire that moves across the sky, brightening the world and acting as a proper light source, with great dynamic lighting and shadows. The color changes at sunset and, once the sun falls to a certain point on the horizon, the day-time sky backdrop is replaced by a wonderful hand-drawn night-time sky full of weird constellations and nebula-like thingies. The moon then rises and also looks rather grand.

The island has a number of different terrains (‘biomes’), each with different trees and creatures, and it definitely looks weird having them all so close together: weird, but cool. The water lets it down a bit, though; something a bit more modern (and transparent!) is definitely needed. The weather effects are a nice touch, but graphically also need work; there’s no change in lighting or skybox whether it’s bright sunshine, raining, or snowing, and all three seem to be equally common in each biome. 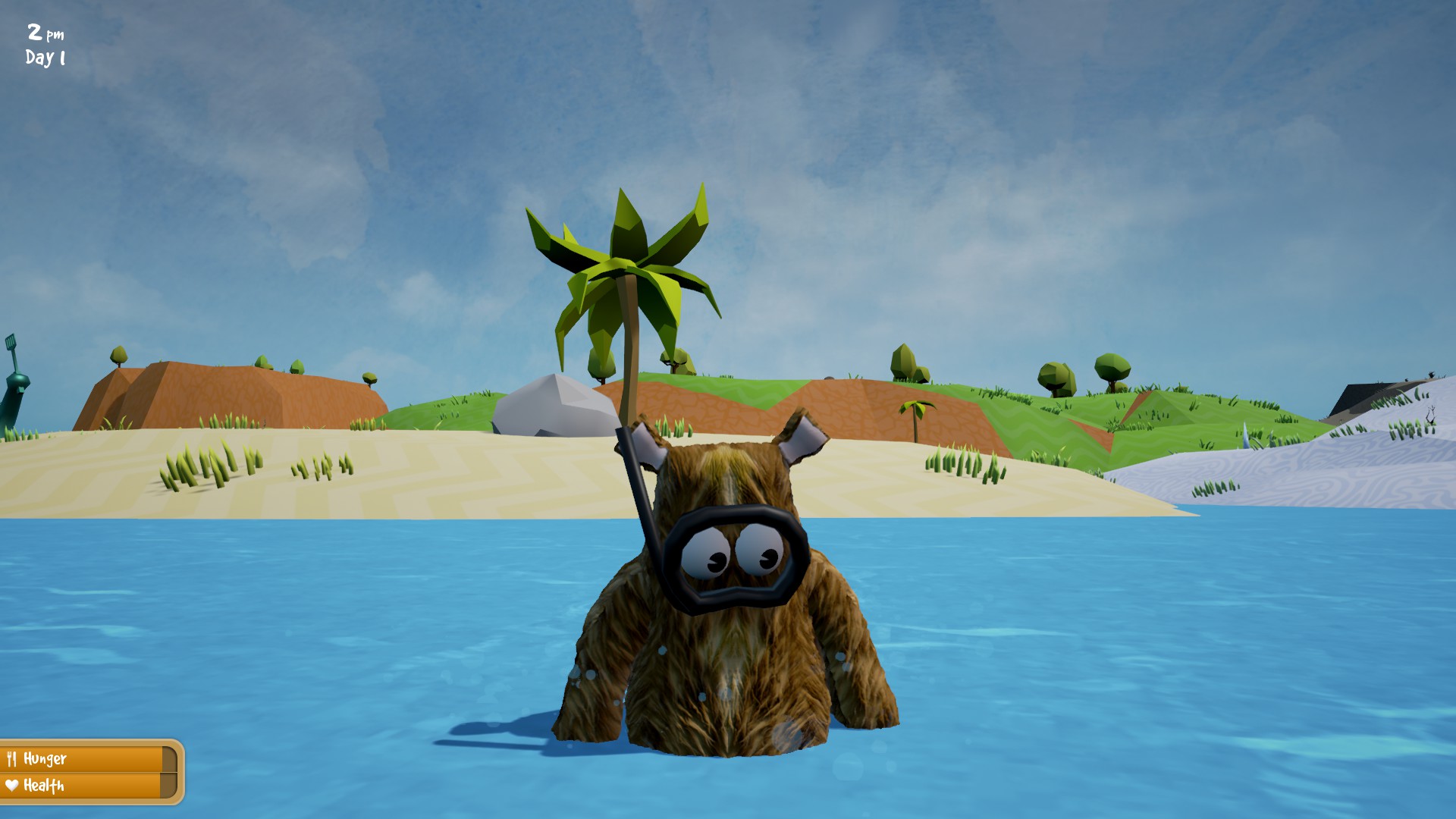 The animated models really bring the world to life, with crazy-looking creatures — not all of which are set on killing you — that ooze personality, and giant comic-like “Biff! Bam!” balloons making hitting them feel a bit less like murdering your toys. Your eyeballs falling out of your head and rolling around on the ground when you die is a touch of graphical genius. 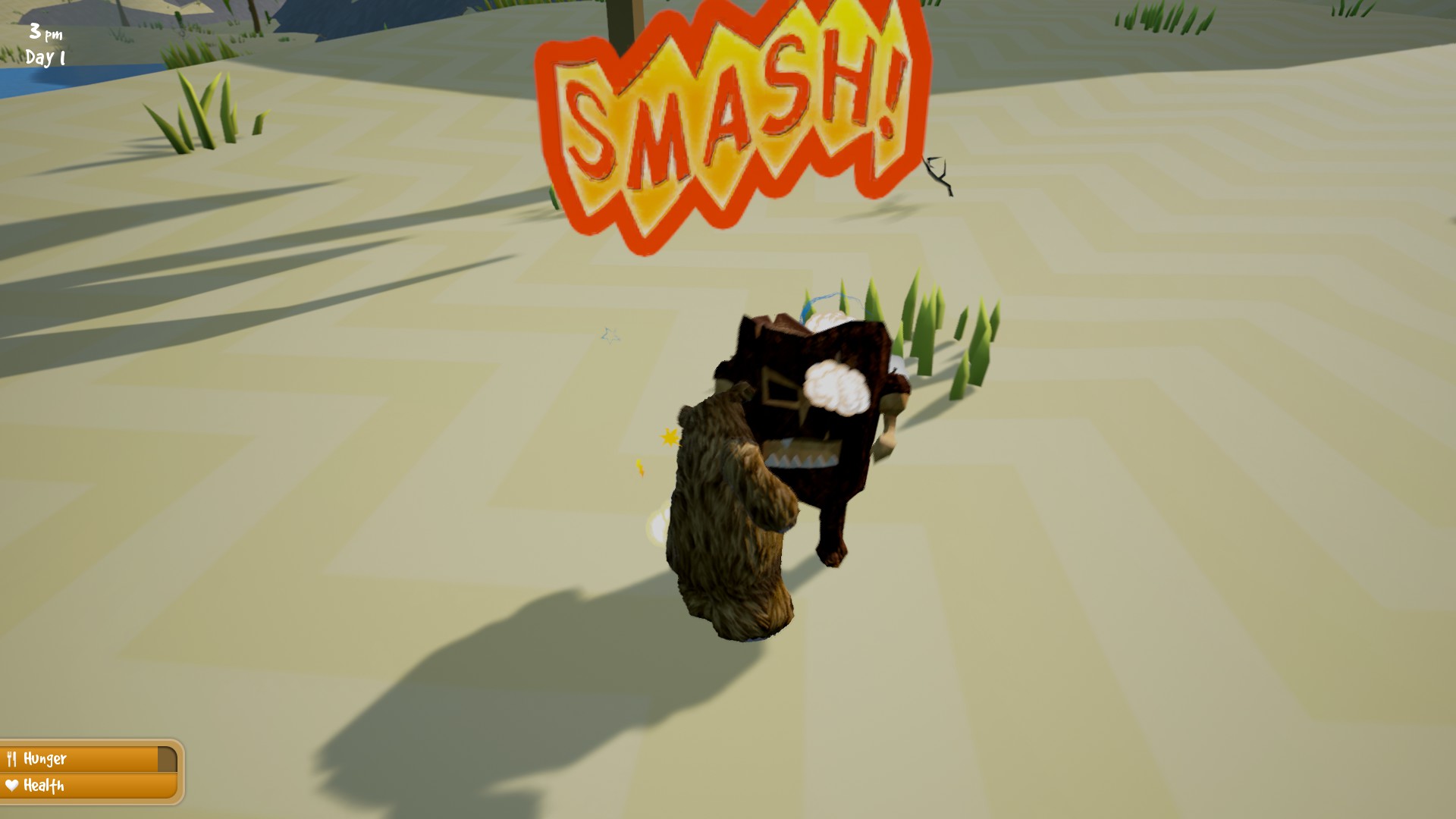 The interface is big and easy to use, including informative and amusing tooltips. There are plenty of graphics settings to play around with; I put them all up to max and only experienced any performance drops when the game was autosaving. It tells you when it’s doing this, but I think it needs to run in a separate thread.

There’s basically no music in Wrongworld. I think there’s a very quiet sort of ambient track that plays throughout, but it’s so quiet and unobtrusive that I might be imagining it. The game doesn’t feel lonely like some other titles, though, with plenty of sound effects that fit the action well, and nothing that struck me as being too quiet or too loud.

The crafting sounds are silly, though. Why does cooking something make sounds like you’re using hammers and saws?

There are no voices, though the protagonist does make some cute voice-like sounds. 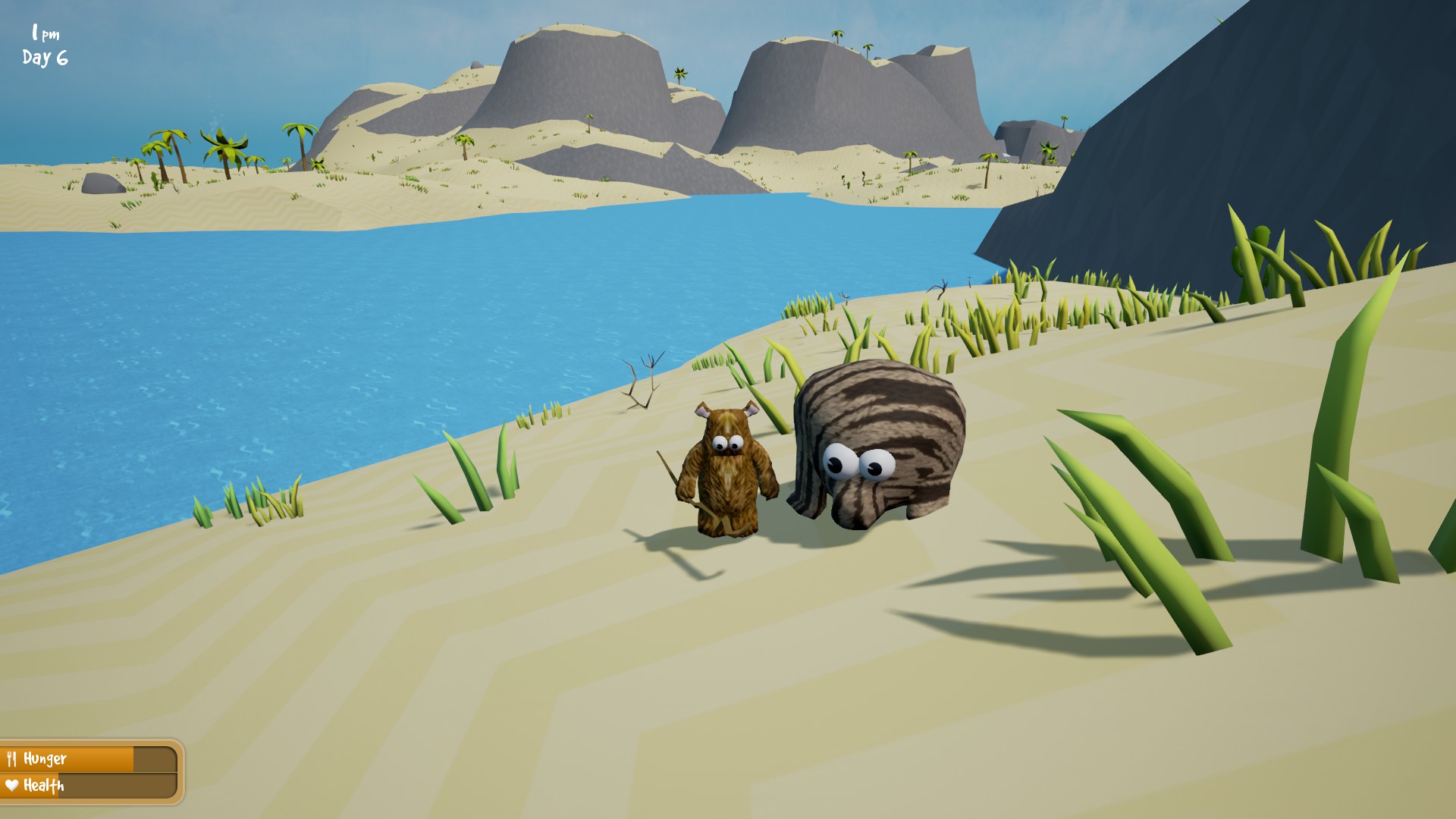 The core gameplay in Wrongworld involves collecting resources and crafting stuff. The more you craft, the better tools you have at your disposal to get more resources and craft better stuff. You have two meters that you need to monitor: health and food. When your food meter hits zero, you start to lose health. When you get hit by an aggressive creature you lose health. When your health reaches zero, you die. You regain food by eating. You sometimes also regain a little health. 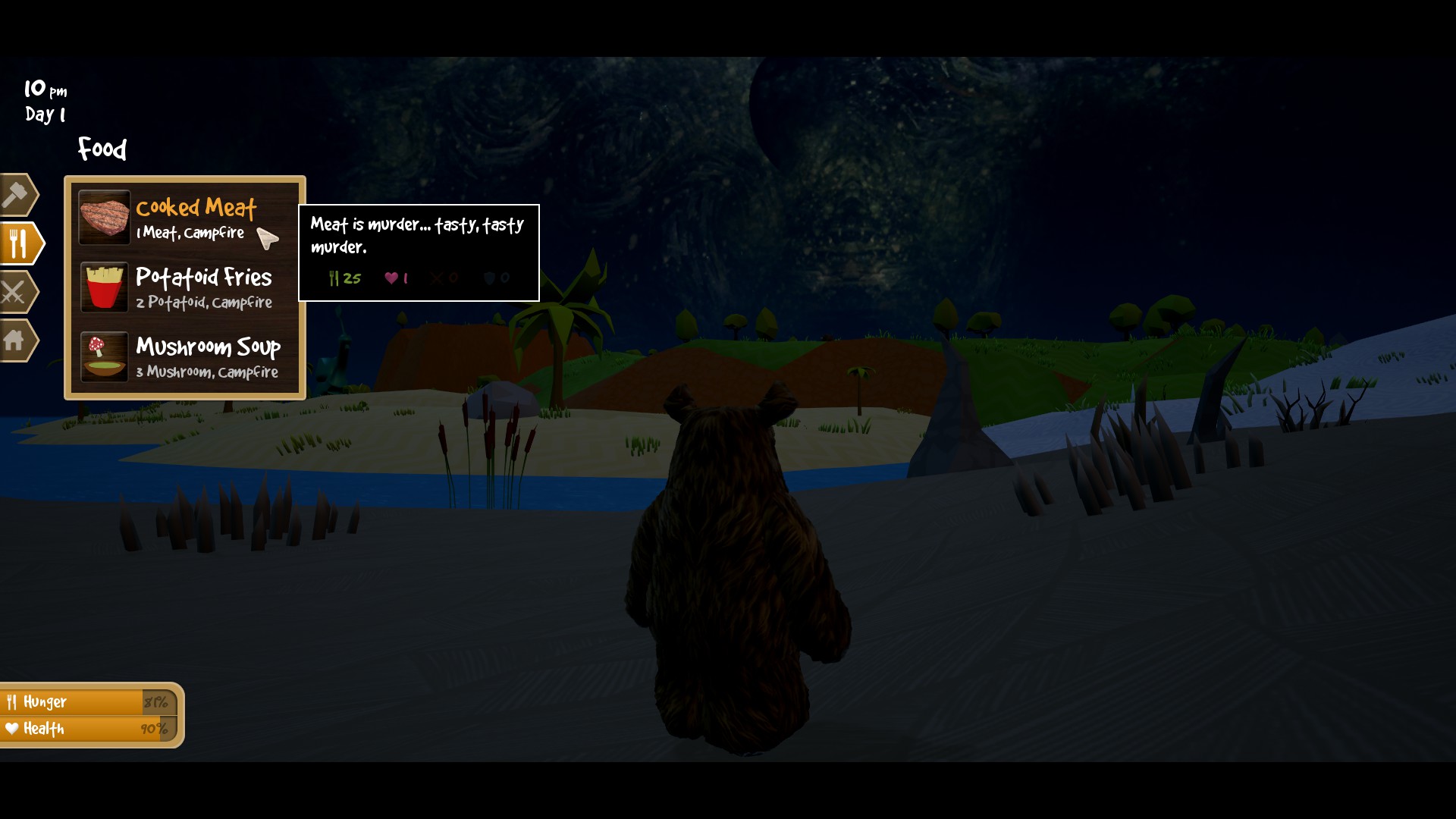 There’s no tutorial beyond a few simple tips and loading screens, but that’s enough for the basics. You use WASD to move, LMB to attack, RMB to interact, and keys for inventory, crafting, crouching, and jumping. The game also includes controller support, but I couldn’t get my XBox 360 controller’s ‘B’ button to work in this game for some reason. 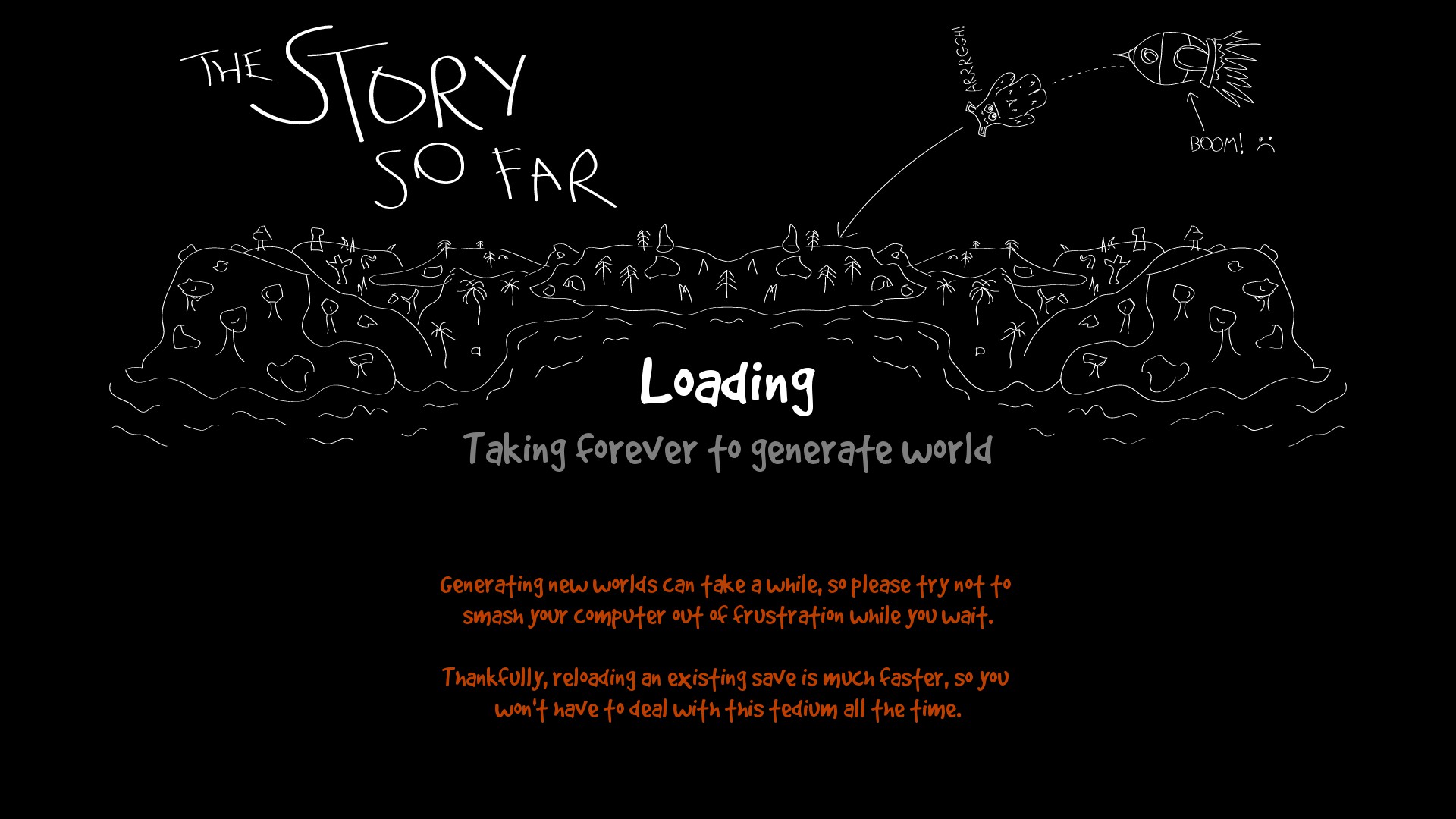 Crafting is simple: just make sure you have the items you need in your inventory and stand near any stationary objects needed for the recipe, such as workbenches or smelters, then hold the interact button. You can collect the basic resources of wood and stone by headbutting trees and rocks, and if you’re lucky you might find acorns or seeds to plant, or ore and coal to smelt.

Combat is very simple: attack. You can jump or roll to avoid attacks, but it doesn’t seem consistent: sometimes you roll and sometimes you jump. Enemies drop resources when they die, some of which you can’t find elsewhere, so combat isn’t only important for self-defense. It can be a bit annoying, though, as you move with every swing, so attacking a stationary enemy isn’t a matter of just swinging away; you have to continually move and adjust your aim.

The game features some rogue-like elements: permadeath and procedural generation. When you die the game gives you a final score; if it’s enough to push you up to the next reward level then the game rewards you with a new recipe that becomes available in all future games. It’s a nice draw card to keep playing, and, being a fan of rogue-like games in general, I love it. 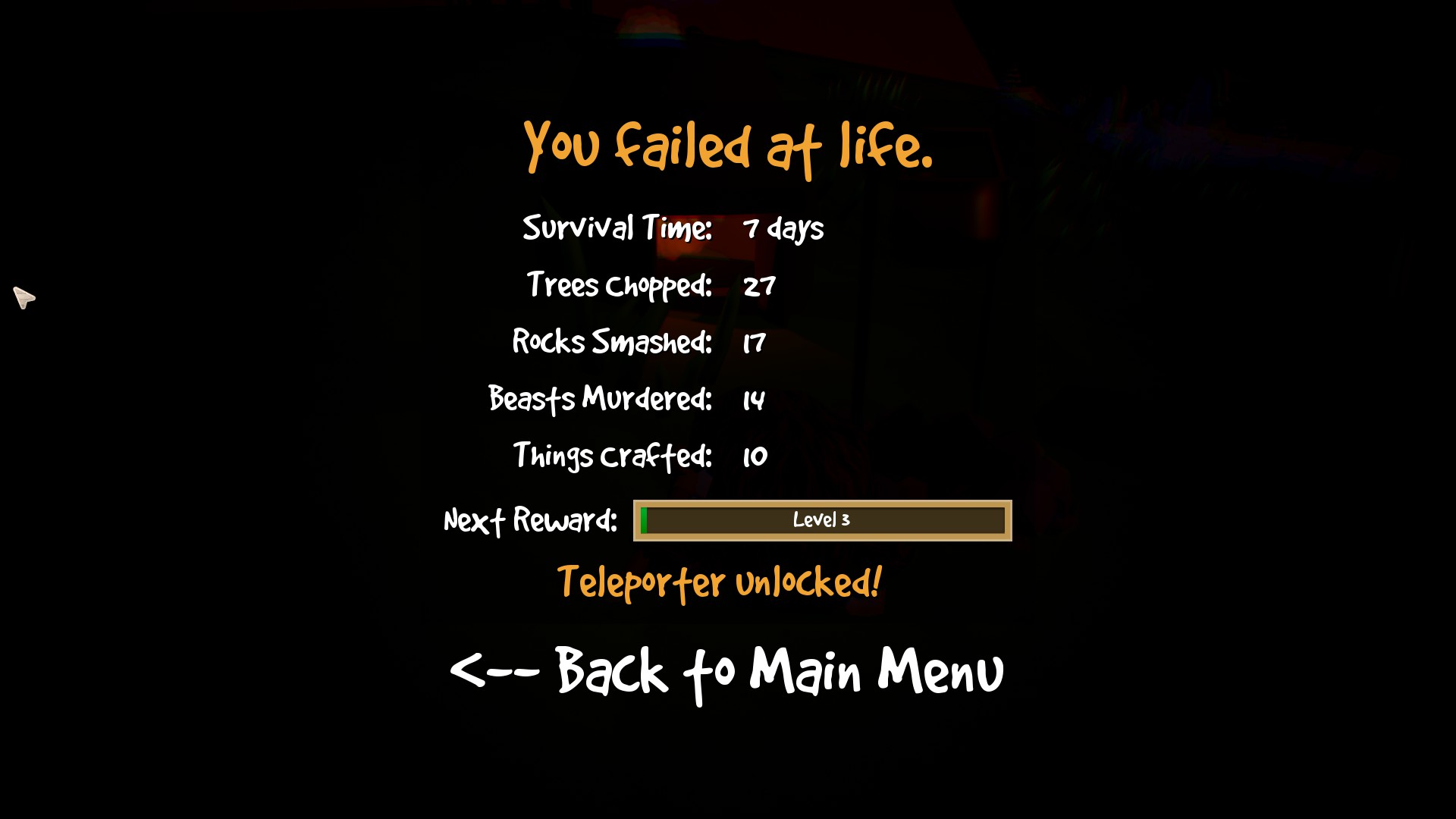 Though there’s no real background story or introduction provided, the grammar in the in-game tooltips and other text is excellent. There’s a great sense of humor that permeates the whole game, too, with some very funny tooltips, loading messages, and achievements, and a general sense of unrestrained craziness throughout. It’s really very well done. 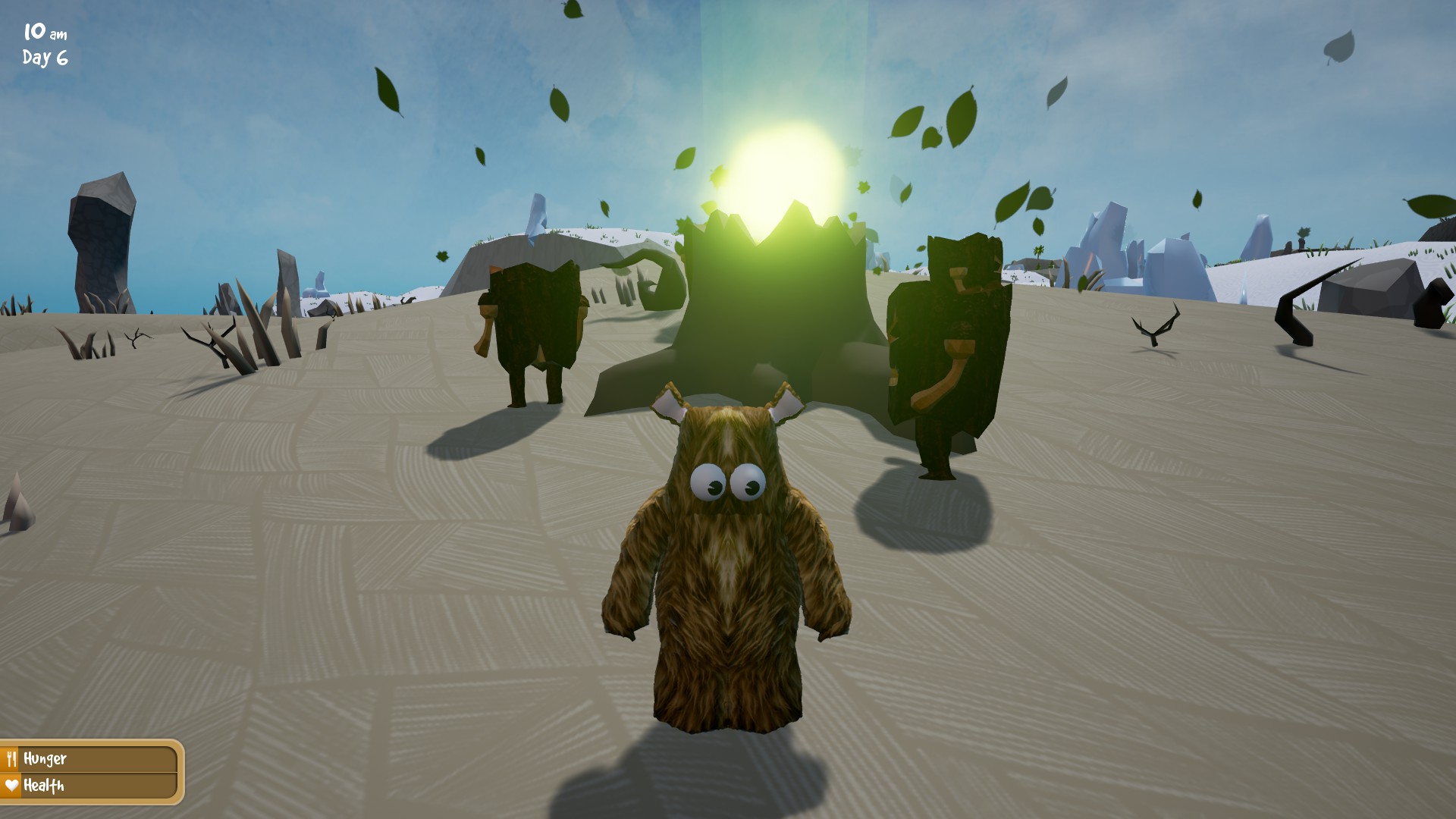 The game is in Early Access and has a number of small annoyances, though I don’t think I’ve encountered any real bugs or stability issues. To begin with, the game seems to imbue objects with a random velocity vector when it first creates them — such as when you harvest a tree — and sometimes this vector’s magnitude is quite large. Be careful especially when you’re harvesting or crafting near water, as I’ve lost many resources and items from the game sending them flying through the air with considerable speed, straight into the water.

There seems to be no way to relocate objects that you’ve built and placed, so make sure you place them where you want them. There’s also no obvious way to fill in any holes that you dig unless you have something to plant in them. This makes digging for sand, ice, and other resources a rather ugly proposition. The island also isn’t very big, though the developer has already hinted at expanding the game world significantly. 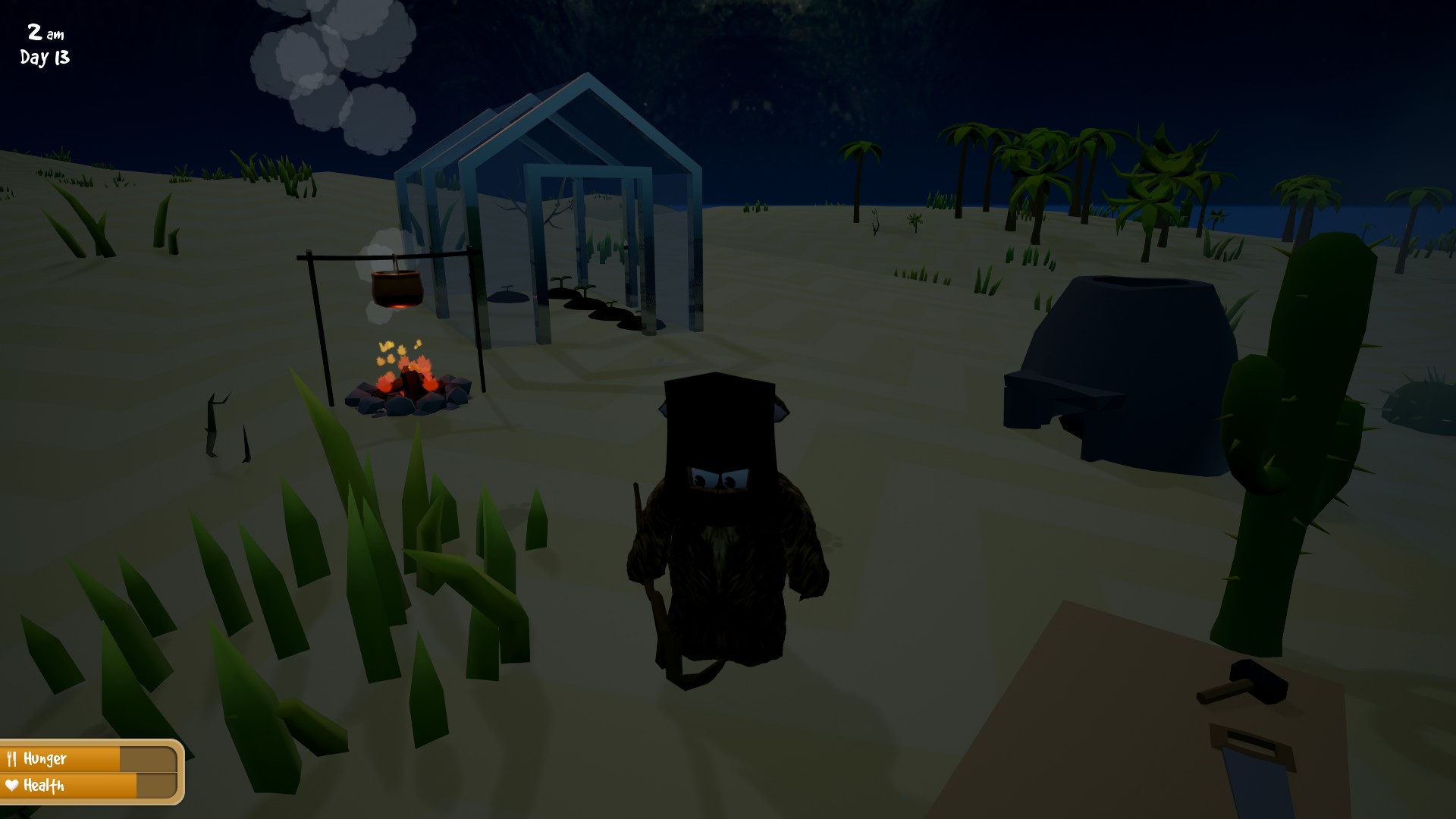 A couple of design decisions are a bit frustrating, too. The inventory is very small and there are no mounts available (though there is a sort of fast-travel system if you have the resources to craft it), so you’ll do a lot of backtracking to your camp to deposit resources there and use your crafting stations. Also annoying is that tools such as shovels and axes don’t have any obvious wear gauge; instead it seems to be random whether a particular item will break on each use. I’ve had a new stone shovel break after digging five holes, while my wooden shovel lasted for longer than I did. Health and food can also be quite hard to come by, so you should expect to die early on a few times before you get lucky.

Cons:
– Island is small
– Can get repetitive
– Weather and water graphics 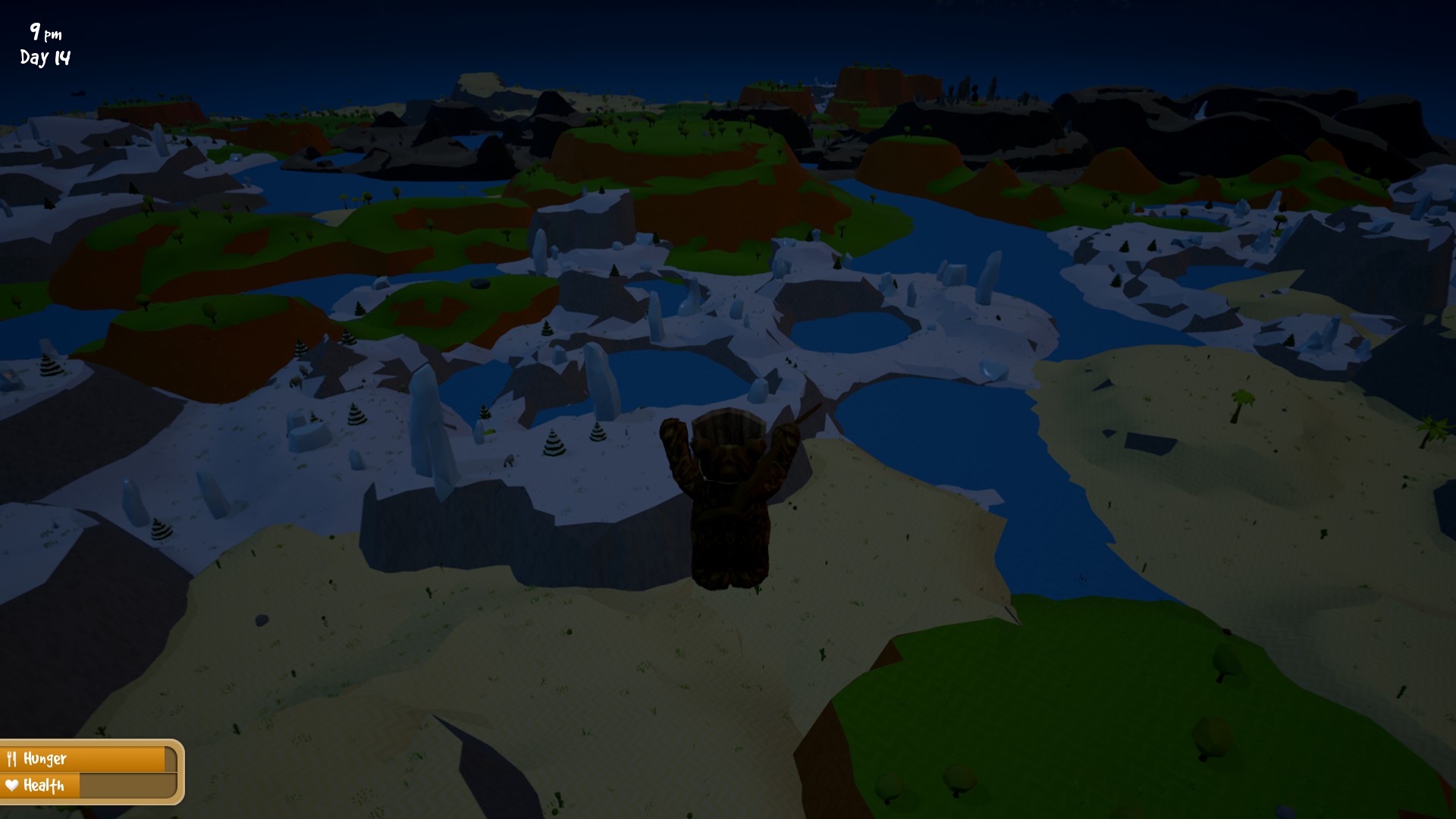 Wrongworld is already a very fun game. If the developer keeps on with his plans to expand the game to a whole world rather than just one relatively small island, then it will be even better. If you’re into survival crafting games and you can appreciate some weirdness and humor, pick up Wrongworld now. I’m really looking forward to seeing where it goes.

Feedback From The Developer!

Thanks for the preview. Very much enjoyed reading it, and I’m glad you mostly enjoyed it 🙂 As this is early access, I’m taking all feedback on board, so thanks for the constructive criticism as well!

I’ll just run through a few points you raised:

— The Skybox does change based on the weather, but it’s rather subtle. For example, when it’s raining or snowing, the sky becomes less blue and more grey. At some point, I plan to make this much more dramatic, probably with a completely different skybox texture and lighting for the various weathers, rather than just a tinted texture.

— Putting the auto-saving on a separate thread is already on my list of things to do 🙂 I’m a relative novice so I’m learning most things as I go, but I hope to wrap my head around this reasonably soon.

— Haha! Yep, I completely agree about cooking making anvil and sawing sounds being a little odd! It still makes me laugh, but it’s also on my list of things to update. To be honest, I think I’ll be sad to see it go because it’s so stupid 🙂

— Someone else recently reported their Xbox controller not registering holding “B” as well, so I’ll be looking into this soon. It always worked perfectly for me during my controller tests, but obviously something has gone a little bit wrong!

— Combat has already been upgraded somewhat with a lock-on system, and there’ll be plenty of changes coming down the pipeline. Oh, and regarding the jumping and rolling… If you press jump while you’re in the early stages of attacking, you’ll roll instead of jump. Again, this will all be upgraded in the near-ish future.

— Spawned objects flying off into the distance… Yep, this is on my list of things to improve. It happens when two of the spawned objects (which are randomly placed) appear on top of each other, and the engine fails to adjust their position slightly to accommodate them. I think I just need to tweak their maximum depenetration velocity and it should pretty much resolve that.

— There isn’t currently a way to relocate placed structures, but I think I’ll be adding a way to dismantle them at some point. Oh, and regarding the holes you dig up… they should automatically shrink and vanish from existence about 60 seconds after you’ve dug them unless you plant something.

— I think I’ll be tweaking the inventory size, or, at the very least, make it upgradeable. There is already a way to get another 5 portable inventory slots, but I won’t mention that here in case you haven’t discovered it yet in-game 🙂

— I’ve already tweaked the tools’ chance of breaking, so there’s no way a stone shovel should break after just 5 digs any longer, and they don’t ever break in combat now. Also, they have an absolute maximum now, meaning that it’s very unlikely that a wooden tool would outlast a stone one. Not impossible, but very, very unlikely.

Anyway, big thanks for all the feedback! I really do appreciate it 🙂