This is a story-driven game involving watching/building stats for various things in your Viking village, while your warriors go on seafaring quests to defeat enemies in turn-based combat and return with the spoils.

You start the game in your home village and learn that all the best warriors have been killed by the Saxons on a voyage to England. You’ve been (half-heartedly) voted in as the new chief and it’s your responsibility to restore the fortunes of the village and ultimately avenge the deaths of your friends.

First of all you have to manage your village by assigning points to various aspects such as farming, diplomacy, craftsmanship etc. Then it’s time to set off on a quest. You select which warriors you want to take with you and stock up on enough supplies, repair tools and trading items to sustain you on however long the voyage is due to last, and then off you go. As you sail along, multi-choice dialogs pop up with various scenarios and you have to decide on options such as attack, investigate, trade etc. which have positive/negative/neutral outcomes. Occasionally you have the option to stop off at various villages where you can replenish your strength by doing some trading, hunting, resting and perhaps upgrade your weapons. At this point there is usually some kind of challenge to invite you for some combat. It’s possible to decline one way or another, but of course this will incur penalties.

Once you’re done with the side-village it’s on to the next one, or else you can keep sailing on to the main destination. As you visit villages they are revealed on the main map, and the overall story unfolds. 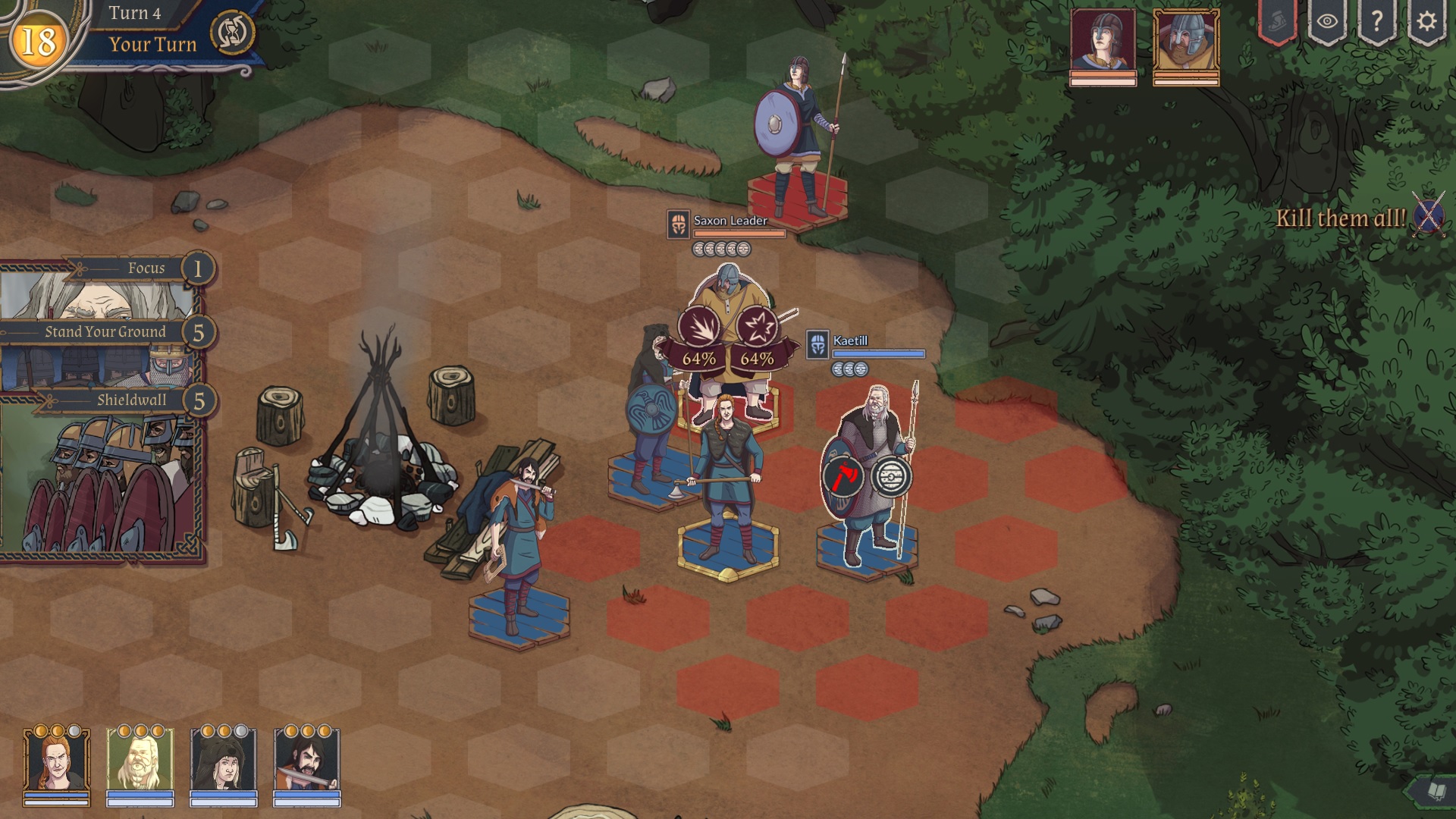 It’s turn-based combat on a hex board. It uses the common style whereby you place your fighters at one end of the board and then move them within a range that’s lit up. Depending on the type of weapon, you sometimes have a choice of two types of attack – blunt attacks are best for lowering defence before the penetrating slash/pierce attacks – or you can choose to defend. Weapons have various stats, some have longer reach, others are better for specific types of attack etc. You also have a certain number of ‘Warcry’ points you can use to boost your fighers for one turn – you get extra Warcry points when you defeat an enemy, and lose them when your own crew members die.

Call me a philistine if you like, but I’m a modern gamer who has come to expect games to teach me how to play by example, being shown what to do, and starting off gently. Here we have the old-school philosophy of reading instructions and then applying them afterwards. And these are pretty complex instructions, especially for someone not familiar with this genre. I was about to say I forgot most of it each time I had to scroll through several dialogs explaining the small details of what I was about to do next, but then I realised that was not entirely true. The fact of the matter is that those instructions might as well have not existed at all. Not a single item of information penetrated my cranium. I found myself performing the usual procedure of clicking everything to see what options were available, using my experience from other games, and generally playing it by ear. This is the normal way of doing things, isn’t it?

Nobody enjoys reading instructions and user manuals at the best of times, even for flat-pack furniture and stuff like that, but this is a GAME. It’s not 1990 any more, I really shouldn’t be forced to do that. 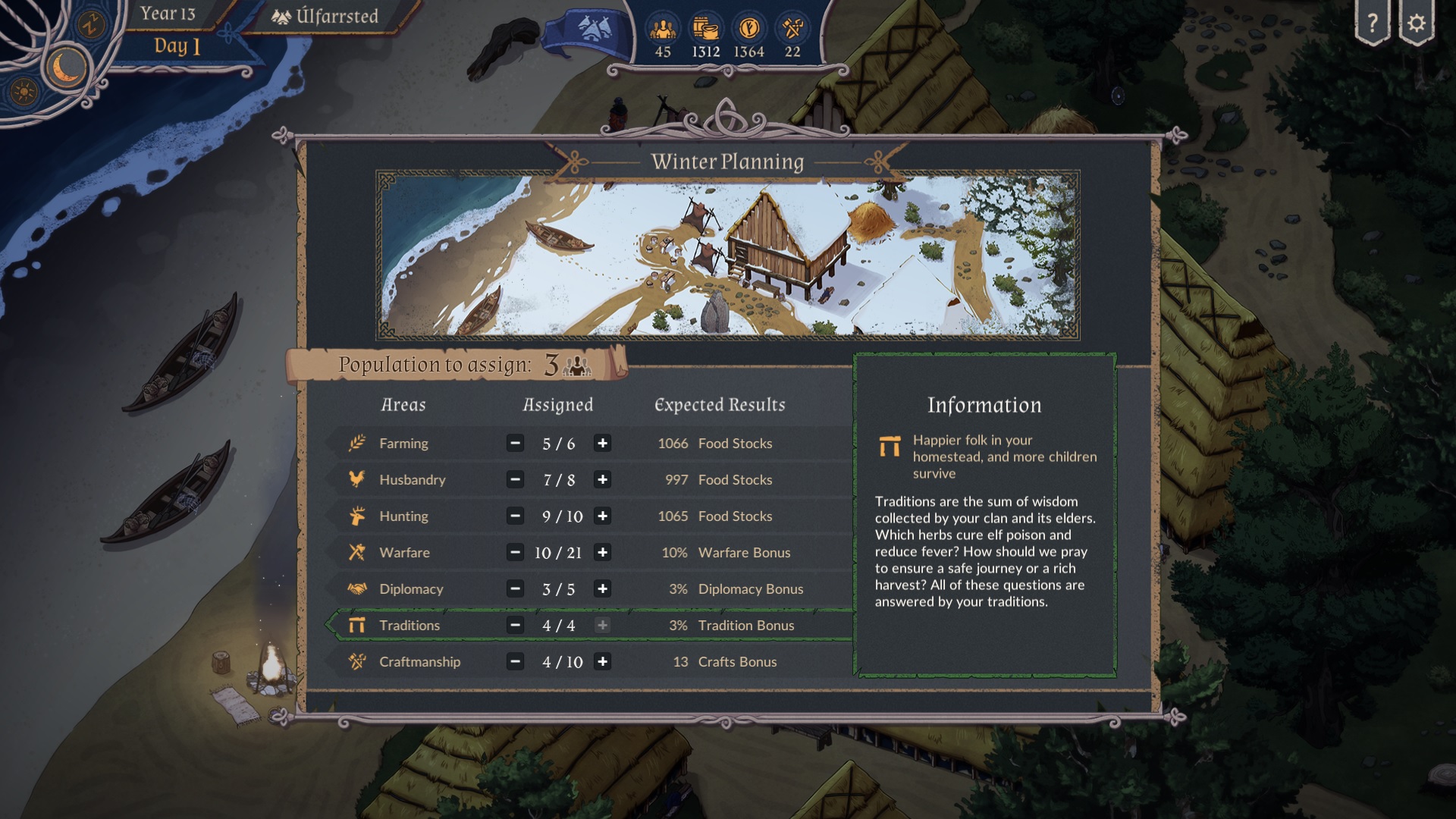 Due to the tutorial methods being so awful, this makes the learning curve unacceptably steep. The game starts with a one-day quest which I managed to win, but it was nothing more than a quick test. The first proper 12-day quest I attempted was a failure. I seemed to be outnumbered in every battle. Lost them all. Lost a warrior each time, making the next battles even more one-sided. My whole party was soon dead and I was offered the option of either reverting to my last auto-save point or starting again from scratch. I have to admit, neither option was very appealing.

There are no overall difficulty settings. It looks like you have to just keep replaying until you get the hang of it, or else study the text-based tutorials to improve your understanding and make better progress. I’m sure there must be ways to defeat enemies with superior numbers on their side, but the methods to reach that stage of competence seem like drudgery to me. 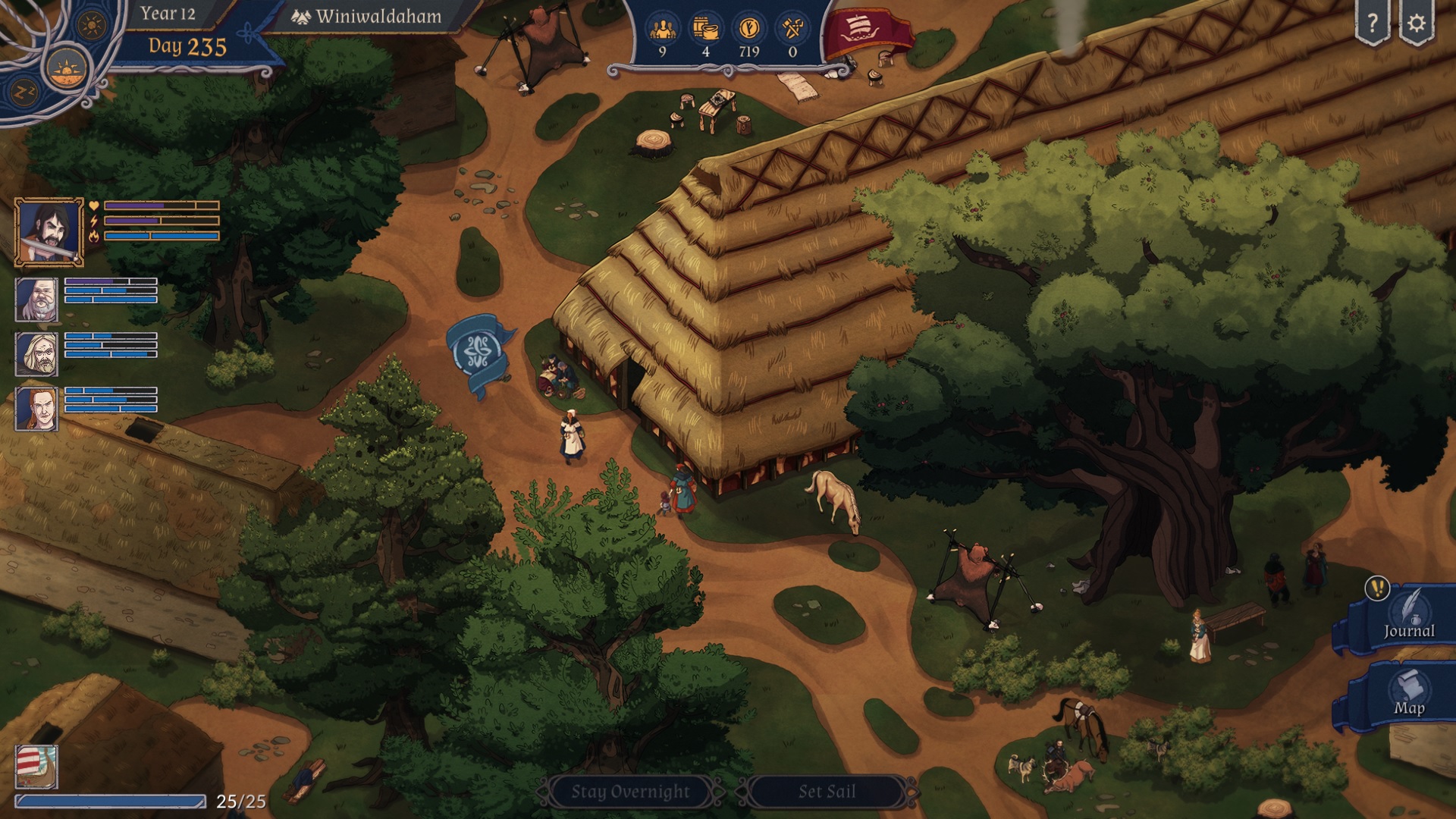 Graphics are pleasant enough with some nice watercolour scenes but the game is more focused on function rather than form. Animations are sparse and basic, but do the job well enough. Music and effects are what you would expect, not much to report.

Trading cards have already been added and achievements have been promised although they haven’t appeared yet. Steam Cloud support has not been mentioned, and I would very much like to see this added. It would be very useful for dual-booters like myself, since the game is fully cross-platform. 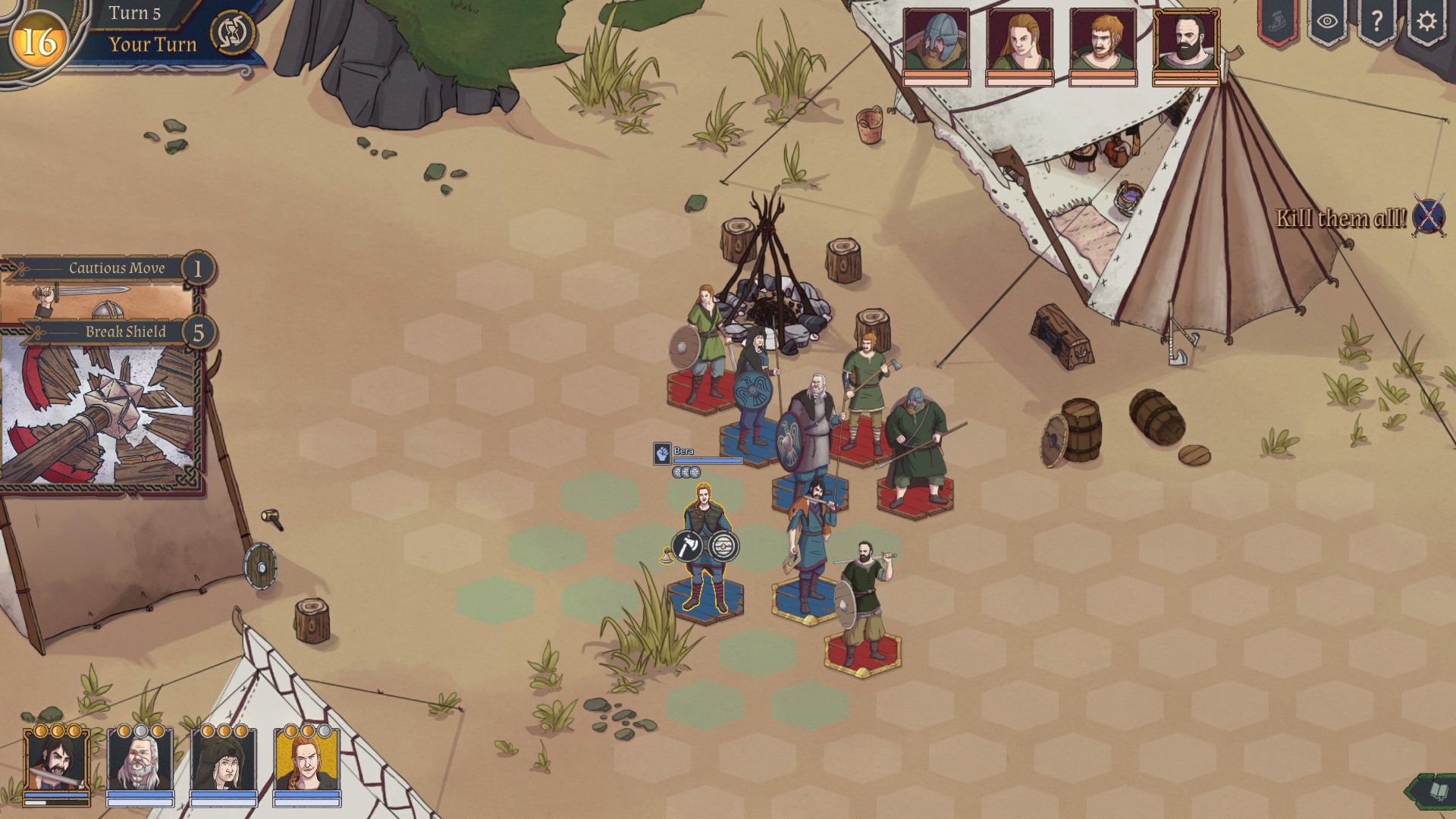 It’s a fair price for the amount of content and complexity of the game. There’s no fancy presentation but the underlying game is solid and plentiful.

I suspect there’s a worthwhile game here if you have the patience and willpower to persevere with it. All the proper ingredients are included: village building/management stats; unfolding storyline; dialog choices; turn-based combat. But the final product doesn’t excite me, I’m just not ‘feeling it’. The ‘RTFM’ style of tutorial is a particular annoyance that in my opinion doesn’t belong in modern gaming, except in games like TIS-100 (look it up and you’ll see my point). Combine that with throwing you in at the deep end with no easy levels to get you into the swing of it, and this is a recipe for frustration.

I always try to ‘get over the hump’ with games like this that block me from further progress in the early stages. In this case I wanted to experience some more of the storyline, but after several hard attempts I just couldn’t get past the difficult combat. 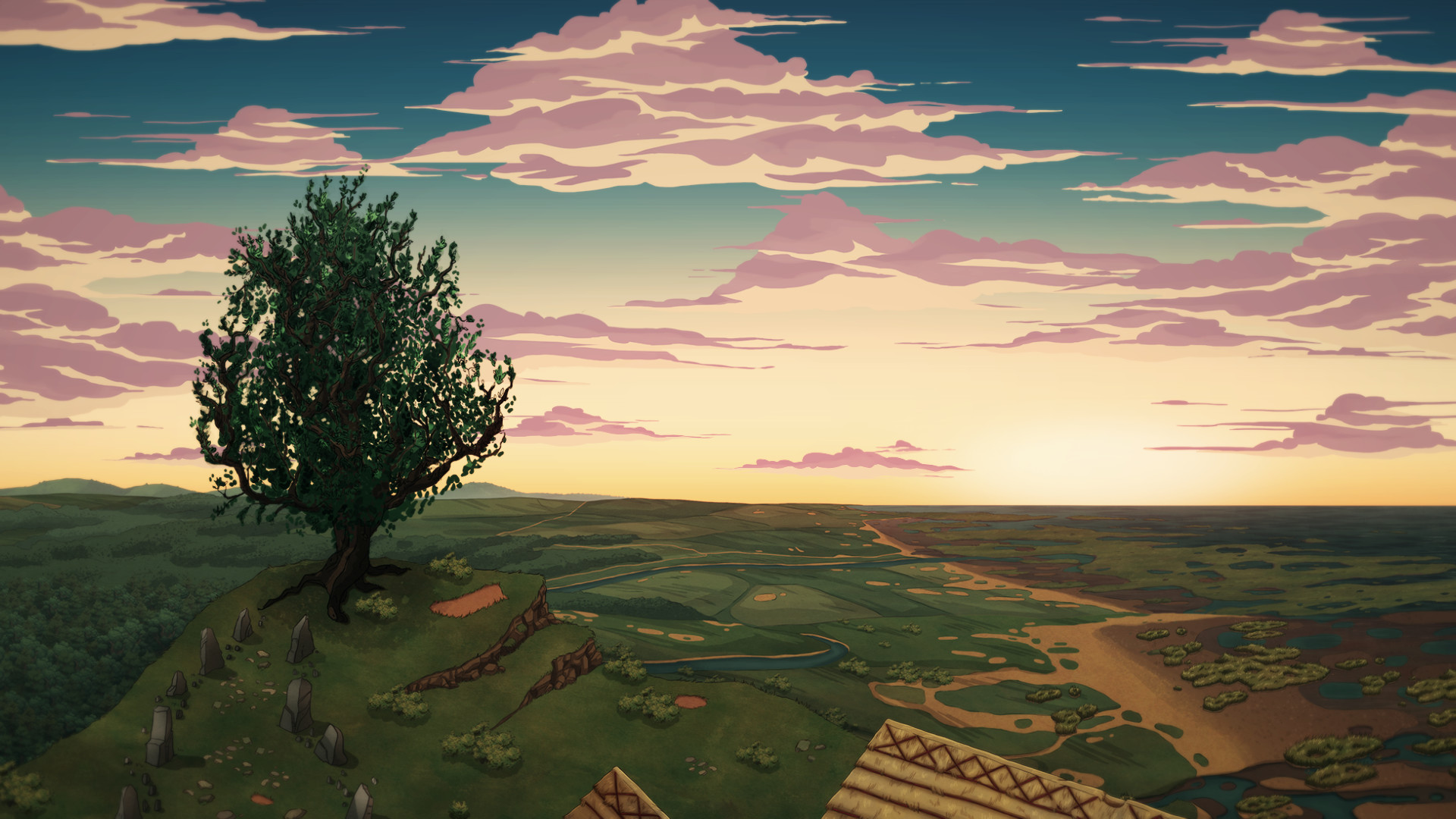