An arcade style game involving some shooting but the main goal is to navigate the 6-axis 3D structures to discover all the hidden pickups and then find the exit point, while trying not to be killed by the aliens.

I picked this up after a quick glance at the video on the store page and was expecting a racing/shooting type game with not much in the way of brainwork. I was delighted to discover something completely different.

The game starts off with a charming cutscene where your character finds an old arcade machine around the back of a building, then a UFO abducts you and you find yourself in an office. The computer terminal tells you that you’re being tested and the future of the human race is at stake based on your performance. No pressure then! 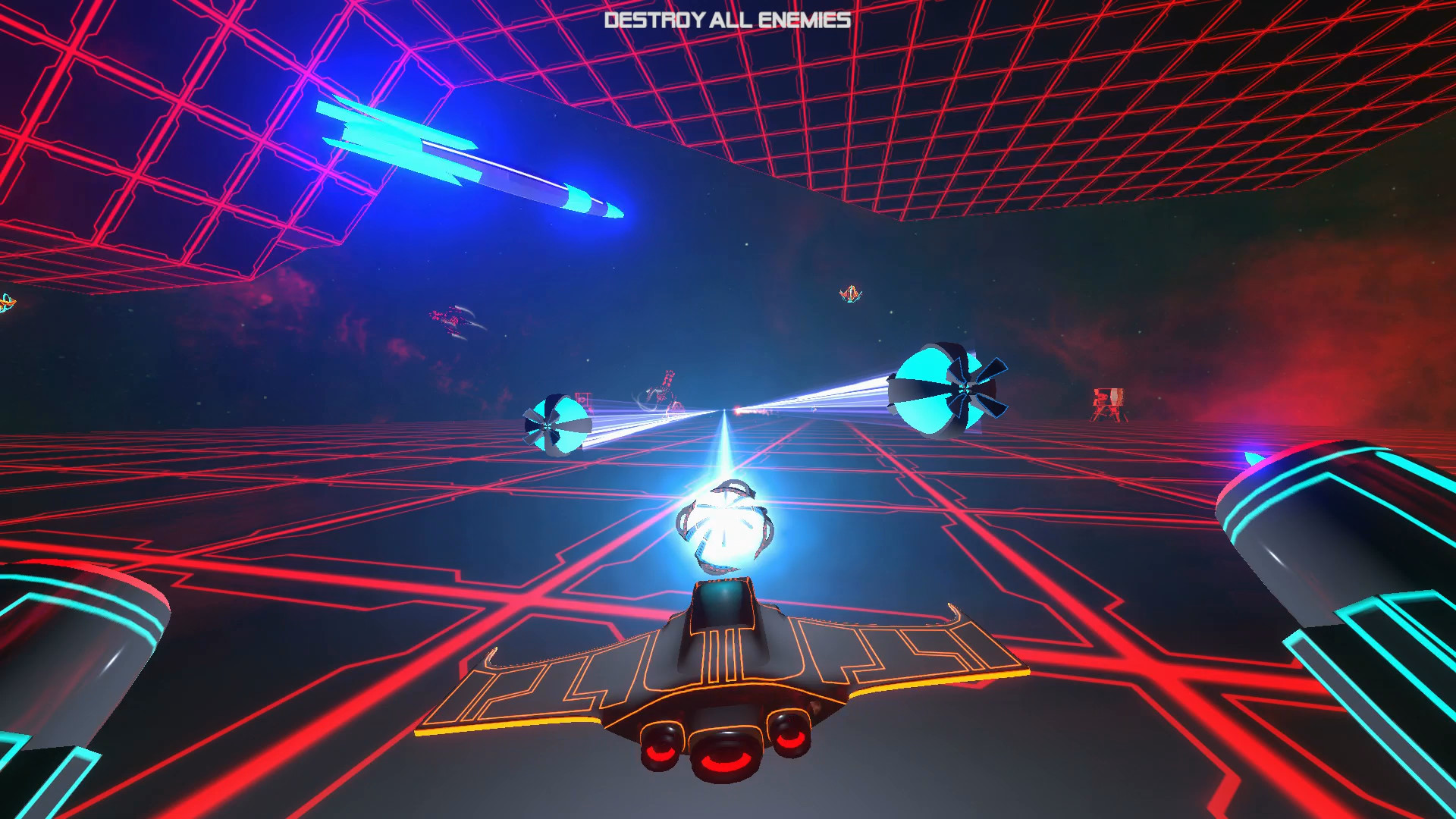 It’s a series of 30 or so levels comprising 3D structures floating in space. The surfaces of these structures have centralised gravity, so there are no ‘walls’ as such. When your ship goes up against a wall it becomes the floor, so you’re travelling around this structure like an insect, stuck to the surface regardless of whether it’s up, down or sideways. It’s wonderfully disorienting. With that said, it is possible to ‘fall’ off the surface if you rush over an edge too quickly. It’s called ‘decoupling’, and if you don’t make it back to the surface within 10 seconds you fail the level. The structures have moving parts and teleporters to make it all the more challenging, and there are items to collect everywhere: Nucleons which are the currency you can use to purchase ship and weapon upgrades from the computer in the office, orbs – always three of them, collect them all to max the level, hidden ship parts – these are very difficult to find but are optional, and bombs. Bombs can blast away glass surfaces to allow you inside hollow areas and tunnels to collect hidden items, and all the while you’re being shot at by aliens.

There are various ways to dispatch these creatures. You can do it the traditional way by remaining on the same surface and strafing them from midrange using cover; you can snipe them from afar; you can snipe them from strange angles by sitting on a different plane and hitting them as they walk into your line of fire, unaware of your presence. This last method can be a little awkward and time consuming though. I’ve found a good tactic is to give them a quick volley and then dive off the edge of the surface, then pop up and give them another blast. You have to watch out for their buddies sneaking up behind you though.

Once you complete a level it’s back to the office where you can spend your Nucleons on different ships and weapon upgrades. You can repeat the same levels again to pick up more currency and improve your firepower if you start having trouble with the later levels, which is nice. There’s also another computer terminal that stores all your messages which gradually build the storyline as you progress. 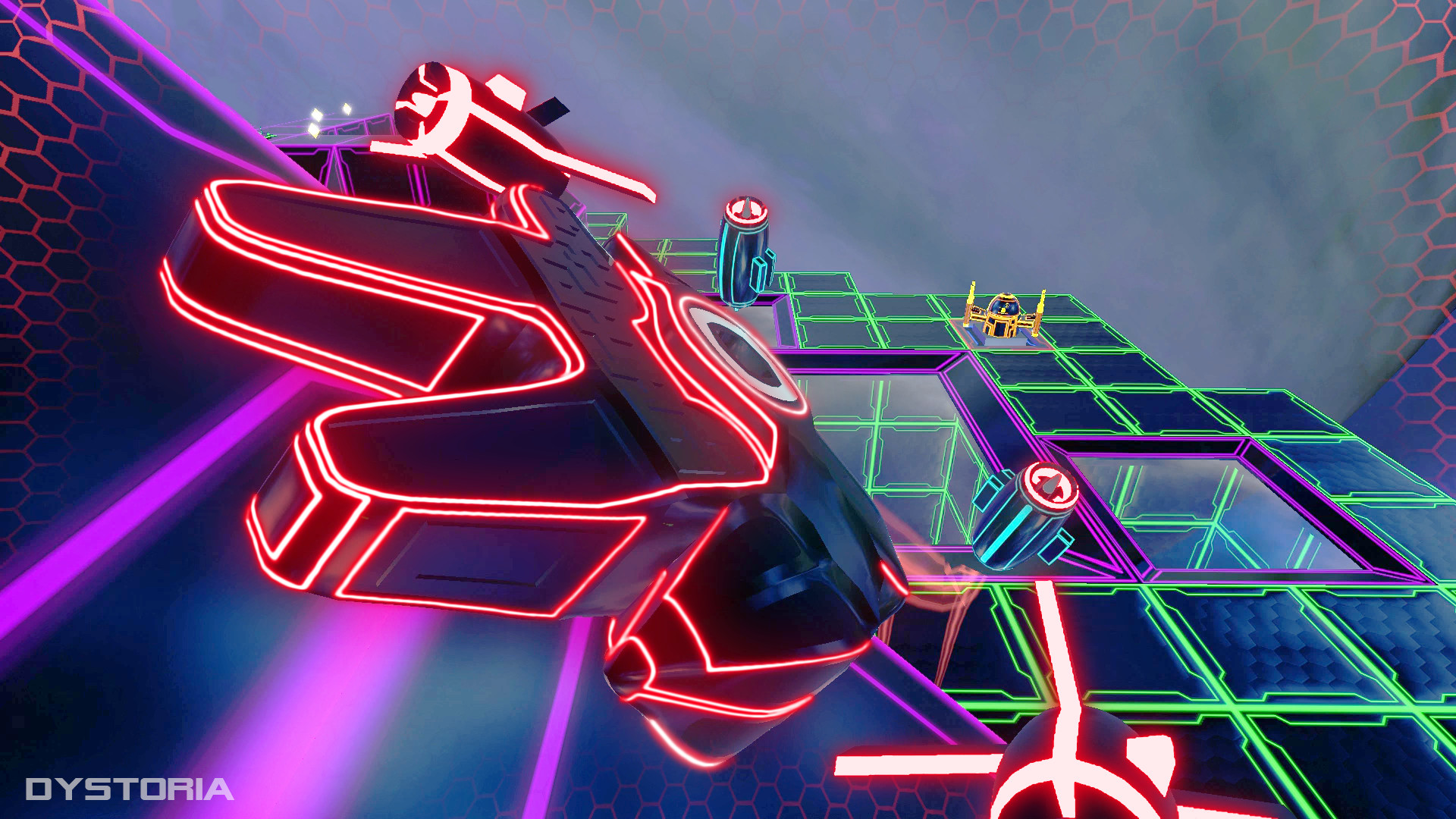 This deserves a special mention. The developers have said that they wanted to capture the original feel of an arcade game within a modern gameplay style and if you ask me they’ve absolutely nailed it. I’m old enough to have experienced actual arcade machines and this is exactly what it was like – smooth, solid controls, neon graphics in primary colours and lively electro background music. Back then you would usually only have the frameworks but here it has been upgraded with modern lighting and effects to make it look even nicer than the originals. A perfect blend of enhanced retro design.

My Xbox One controller kind of worked but I think some of the functions weren’t working properly. This didn’t matter to me because the game is perfect for my Steam controller, which I always choose for games that use the right-stick for camera control – the touchpad feels fantastic for flicking the camera around and aiming with pinpoint accuracy, and all the buttons worked perfectly having selected the recommended option in Steam Big Picture mode. I’ve also tried keyboard/mouse and that also works great, you can mostly just use W to move forward and steer with the mouse.

Pressing RB zooms you out for a 3D overview of the level structure, in case you feel completely lost – which is not uncommon! You can turn it around and view it from all angles to see where your ship and all the (visible) pickups and enemies are located. It gives you a general idea which direction you need to go, but when you revert back to ‘ground’ view it’s still not obvious where you’re heading, you have to move on a bit then ‘pop your head up’ to overview to see where you are. Sometimes I go to overview just for the fun of turning the structure around like a 3D model, it looks great. 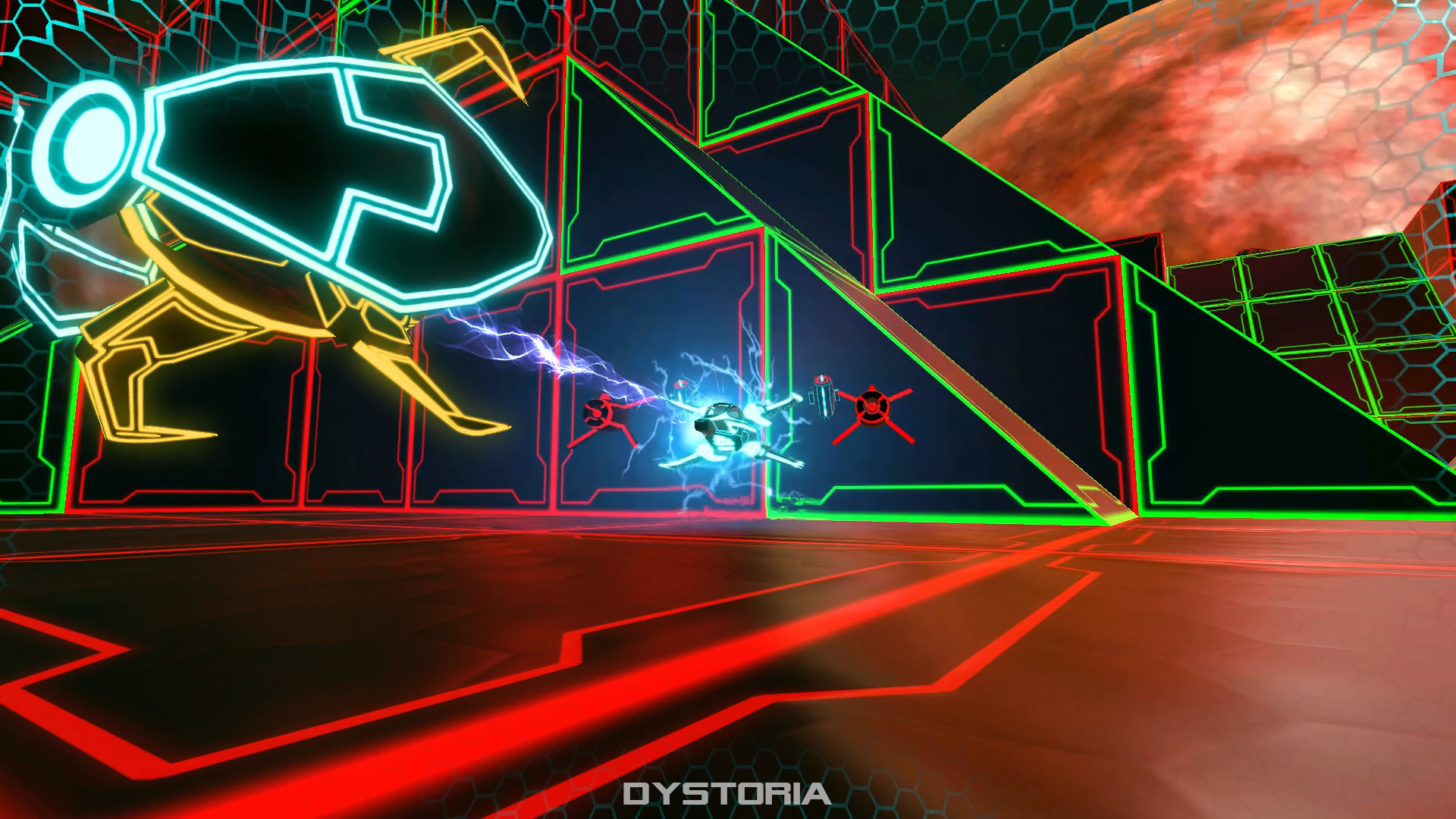 There are several difficulty settings. I can’t remember how many exactly because you only get to choose at the start of the game, there doesn’t seem to be any way to change the difficulty level mid-game. I’m a lightweight so I went straight for Easy, but even on this setting I was already struggling with the monsters before the halfway point, so I imagine it can get pretty hardcore if you want to play in Iron Man mode.

There is no crosshair for aiming, which I found slightly odd. I don’t know if it was omitted intentionally (for the retro feel?) but I would suggest perhaps having it on easy mode and removing it on harder modes. Just a thought, it’s not a major issue. 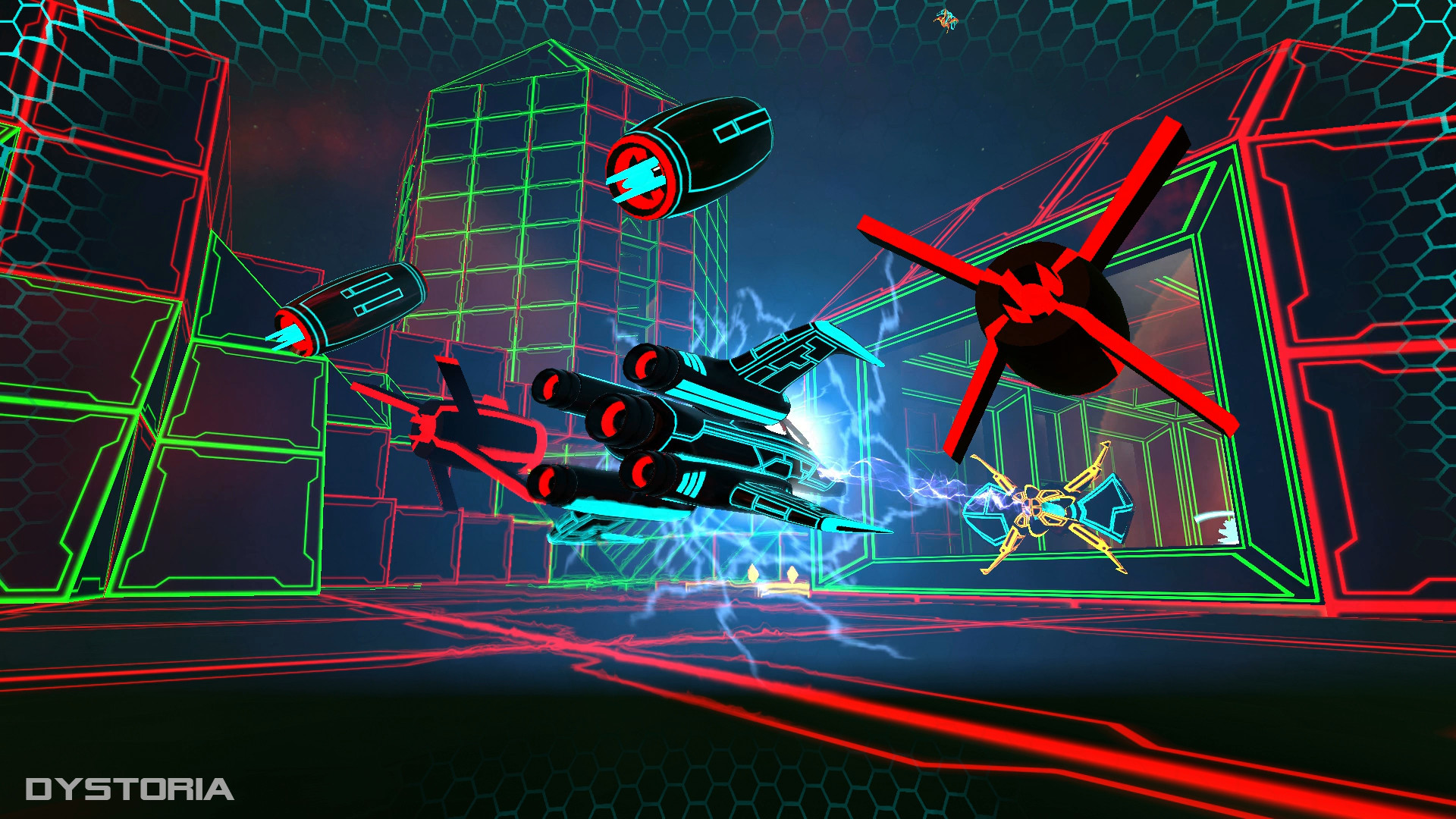 All the main things. 12 achievements, all basically tied to milestones and the amount of time spent in the game, there’s nothing quirky or unusual that you have to specifically strive for. 7 Trading Cards. Steam Cloud, which would be useful for me if the game was cross-platform, which it should be considering it’s made with Unity. The only thing that slightly spoils the experience for me is having to boot into Windows to play it. Linux please!

In retrospect, having played the game, I would certainly pay full price for it. The thing is though, people will probably look at the store page, see an arcade game (just like I did) and decide it’s too pricey. I think this could be the main reason why it seems to have such low sales, and it’s a real shame because this is a gem that people are missing out on.

This is a hugely satisfying arcade game with elements of puzzle, shooting and discovery, along with a unique gameplay mechanic not to be found in any other game that I’m aware of. Controls are tight and it feels fabulous with a Steam controller.

Dystoria is a game about finding hidden gems. Entirely appropriate, as the game itself is one. 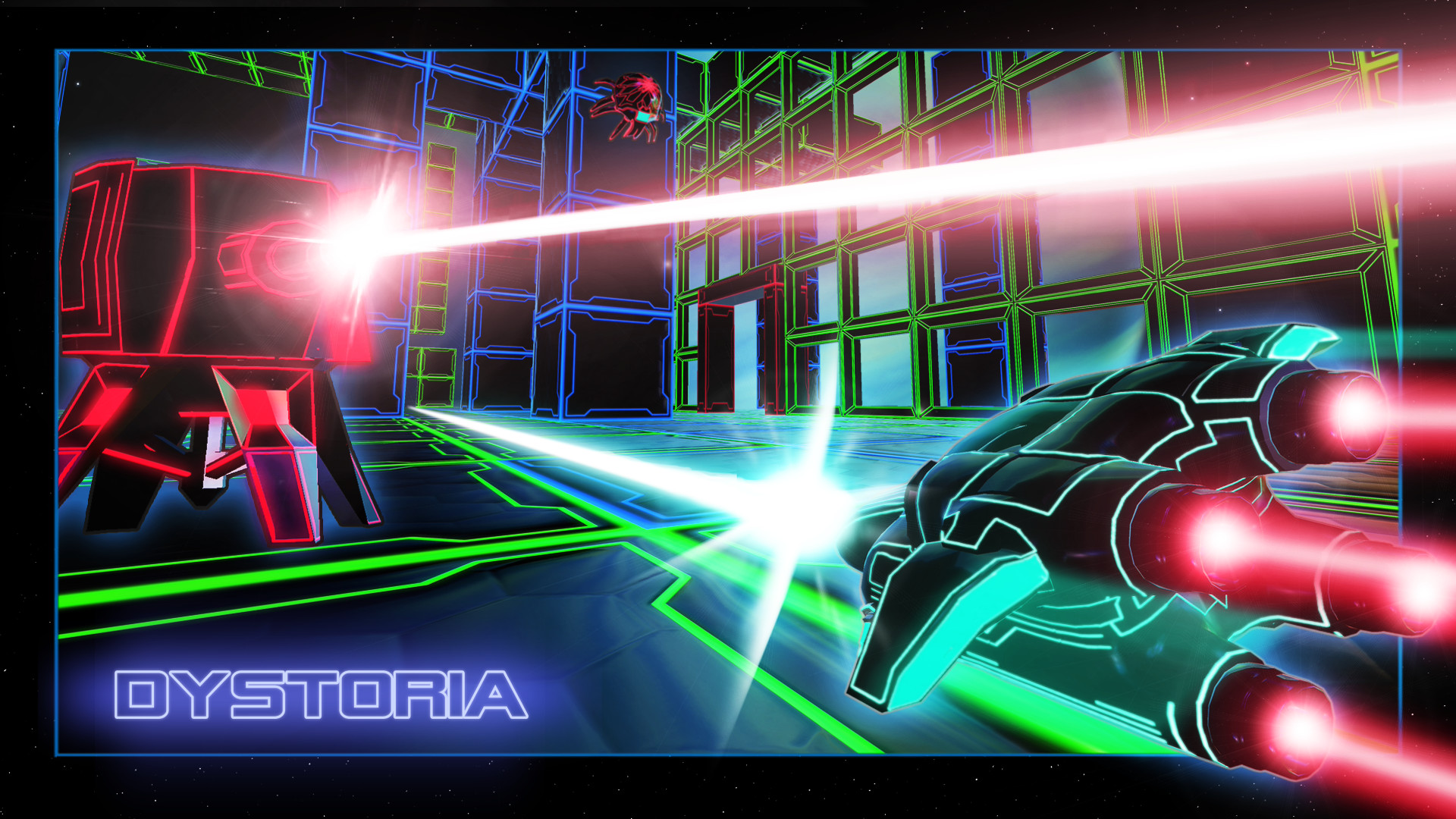