Holy Potatoes! We’re in Space?! is the second game in the Holy Potatoes! series made by Daylight Studios and published by Daedalic Entertainment. In contrast to the first game in the series, this one doesn’t put you in charge of a weapons shop, but instead, it puts you at the helm of a fully capable spaceship. In essence, the game consists of going around different solar systems, exploring various planets, while fighting numerous enemies, crafting a wide variety of weapons and researching new upgrades along the way.

The story revolves around Fay and Cassie, two sisters who’re searching the stars for their lost grandfather. Along the way, you’ll meet various different characters which you’ll be able to help, and so, the game actually contains several little side stories besides the main one, which I won’t spoil for you. The narrative is delivered through text-based dialogue between the different characters, and the game’s dialogue has a great deal of charming and amusing humor to it to go along with an impending death scenario. While most of the dialogue tends to happen outside combat, characters do tend to engage in conversation in the midst of combat.

Throughout the game, you’ll be traveling via the system map, where you can see and visit different planets or the local Star Hub. You can dock in Star Hubs in order to refuel and repair, as well as purchase ship upgrades, hire new crew members, gather resources, and locate weapon parts. Planets, on the other hand, are where you’ll spend most of your time. These come in three different sizes, small, medium and large. Each one of these sizes corresponds to the amount of encounters that each planet will have when exploring it, with the smallest one having three encounters, the medium planets having four encounters, and the largest ones having six encounters. These events can either be actual fights or some sort of “choose your own adventure” scenario. The latter will grant you various rewards depending on the choice you make. Still, you’ll eventually come across recycled events and, while one option was successful, or failed, the first time you tried it out, it doesn’t necessarily mean that choosing the same option another time you encounter the same event will be successful in the same way.

While the theme is different and the game doesn’t come out as one, this definitely feels like a dungeon crawler, with the dungeons being the planets themselves and the star map being the overworld. Now, in order to be able to proceed to the next zone, you need to complete a series of objectives. To provide some tension to the player and some sense of immediacy, the game gives you a limited amount of turns that you can spend on each zone. Otherwise, the enemy fleet will catch up with you. This means that you’ll need to try and complete the objectives as fast as possible. Exploring and traveling from one planet to the next uses one turn, so you can use the spare turns you get after completing all the objectives to farm for resources and upgrades.

One of the main things about the game is obviously the combat. This is turn-based in the old classical fashion, featuring critical hits, hits based on the accuracy of each individual weapon, and action points. In each turn, you have a certain amount of Charge, which are essentially action points used to fire weapons and abilities. It’s up to you to find what’s the best possible combo for your arsenal given the amount of charge you have in any given turn. Still, unused charge will carry over to the next turn. You can have up to four weapons on your ship, provided you upgrade it in order to support this many battle stations. Attacking is as simple as it could be, all you have to do is select one of your weapons and then click on the enemy ship in order to fire. On that note, you can either target the ship’s hull or aim for a specific weapon in an attempt to destroy it. You can also shield either your hull or a specific weapon, in order to absorb incoming damage. Thankfully, the combat doesn’t involve a restricted range of weapons. Instead, the game offers many different weapon types including, shrapnel, missiles, railguns, lasers, wave weapons and other unique ones, each with their own specific role and suited for a specific scenario. More often than not, a good combination of these is recommended. In the same sense, knowing which enemy weapon to take down first is also key to victory. 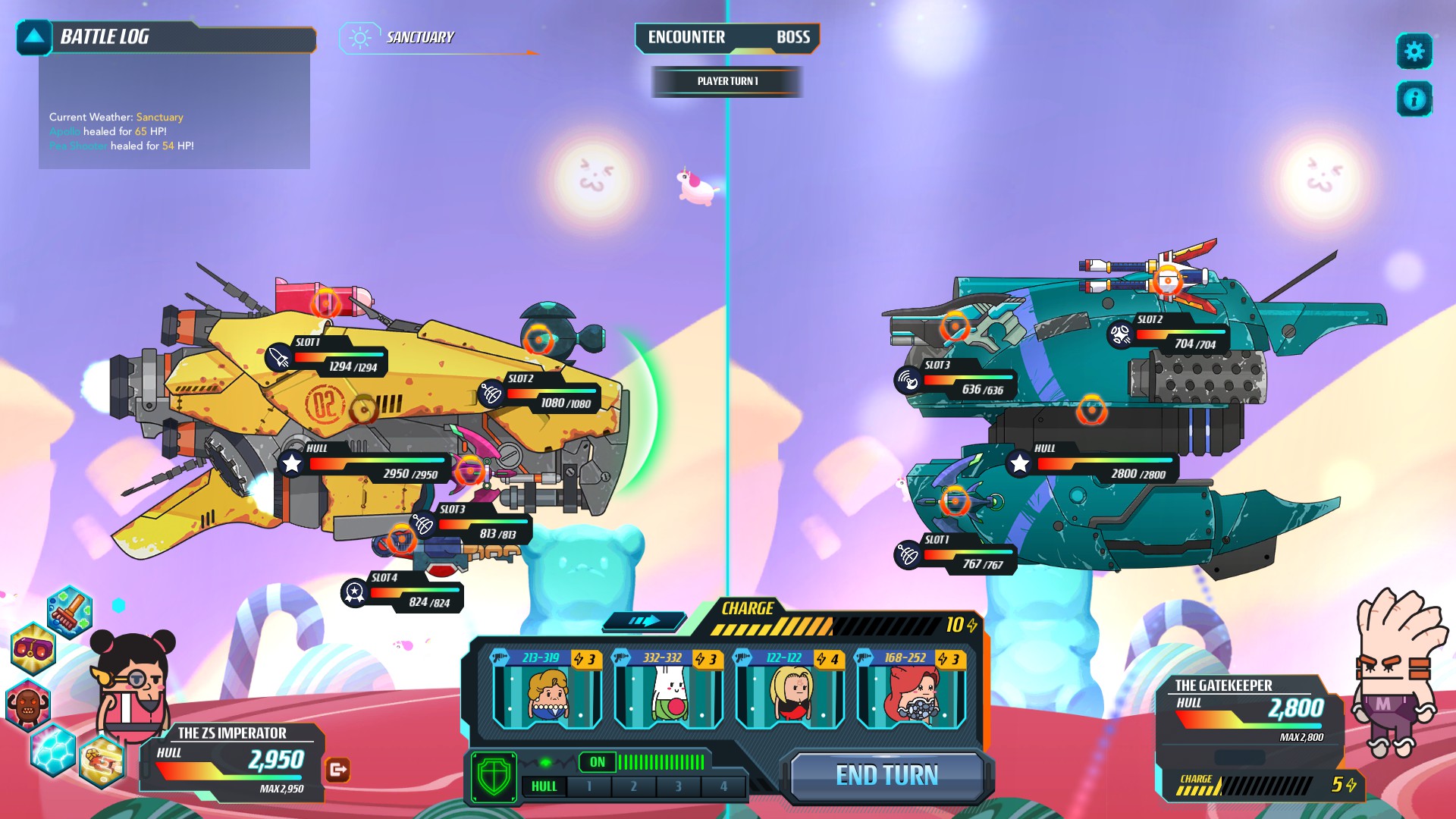 Bearing the above in mind, there are other variants that spice up the combat, including boss fights, which require you to adapt to special abilities and attack in unconventional ways, weather conditions, which can have both positive or negative effects on ships, crew members and pilot’s abilities. Unfortunately the game only offers two pilots for you to choose, those being Cassie and Fay, each coming with a different set of skills that you can use during combat. These abilities level up every time you arrive at a new galaxy, and can consist of things such as stunning enemy weapons for a certain amount of turns or increasing damage resistance. On the other hand, certain crew members are more proficient with certain weapon types, so there’s a degree of management in here, albeit somewhat small.

Most of the management of the game takes place inside your ship, where you can assign crew members to research, crafting and battle stations, as well as to the therapy room. If one of your weapons gets destroyed during combat, that weapon is gone, and the crew member assigned to it will end up traumatized by the event, thus requiring therapy in order to recover. Crew members have unique characteristics that influence how well your ship performs and the stats of the weapons. They’re also more effective at a certain role, and that can be either as a weapons or crafting specialist. With that said, the game also has a very strong crafting element to it. By assigning a crew member and a weapon part to a crafting workshop, work on a new weapon will begin, but that will take a certain amount of time in order to complete. Likewise, you can also train your crew in order to provide them with passive bonuses, as well as research upgrades that affect the overall performance of your ship.

While winning a battle rewards you with money and sometimes even weapon parts, when facing overwhelming odds, enemies might offer you money in order to buy their escape, to which you can either refuse or accept. However, I found out that, even if you refuse their offer, and you end up either destroying their ship or they end up escaping, the reward is either larger or the same as it would’ve been if you had just accepted their bribe. So, the question is, why should the player actually accept their bribe? Is it just because of some personal moral dilemma related to actual surrendering? The whole thing confuses me. 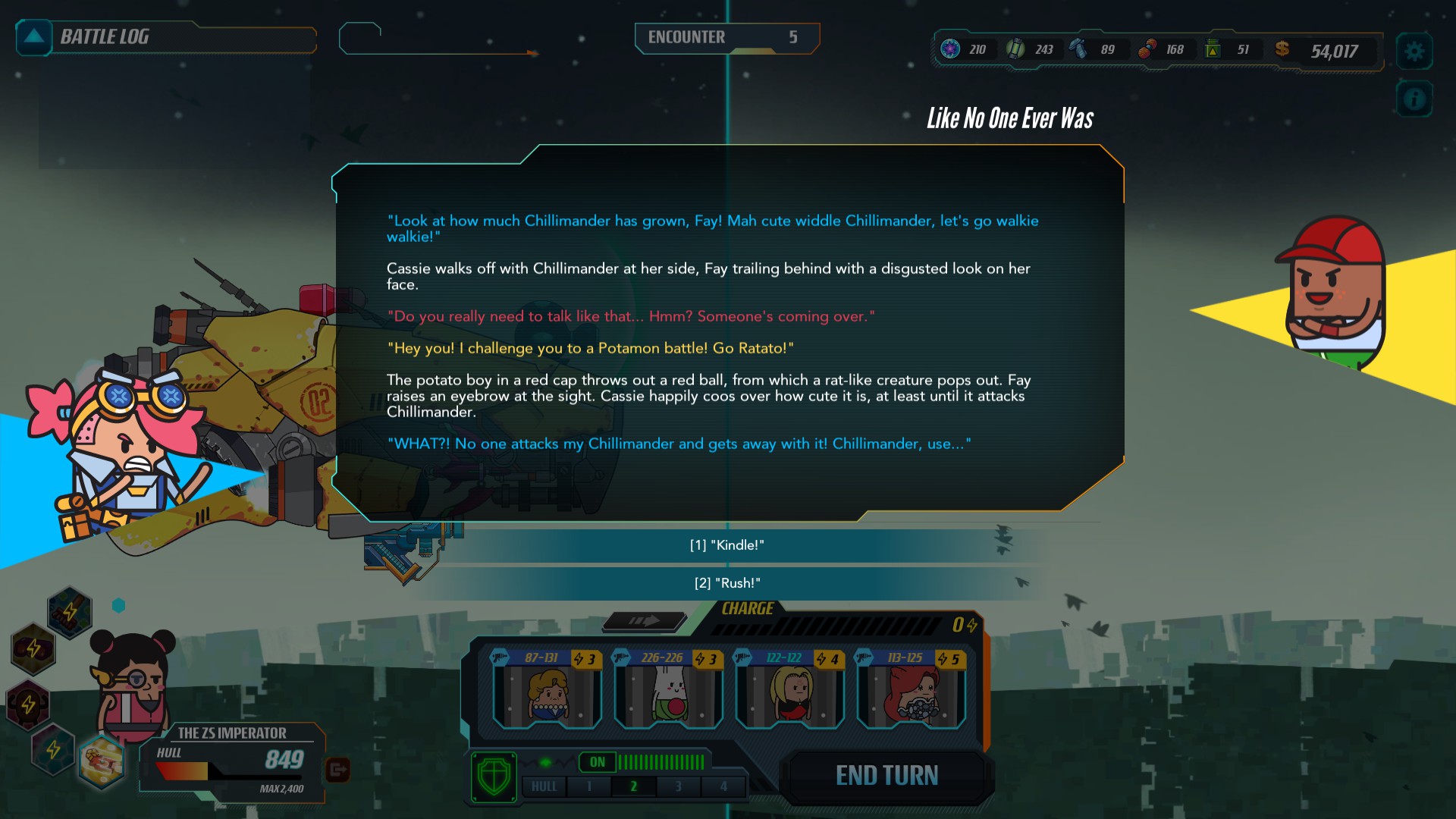 If you find the game to be too hard for yourself, you can opt to play the game in Couch Potato mode, which features infinite turns per star system, allowing you to farm and grind at your own pace. Still, the Normal mode is the one the developers created as the intended experience when playing, so going for this one is most certainly advisable. As far as the game’s options menu goes, it is really lacking in terms of visual settings, but I guess that is to be expected from a 2D title such as this. Still, I find it nice enough to see that there are separate audio sliders for music and sound effects. Some non-native English speakers might be happy to know that the game also supports six other languages, German, French, Polish, Russian, Chinese and Japanese. With that said, I do have one gripe with the game, and that is the fact that there’s no manual save option. You have to rely on the game’s autosave feature. The game usually saves everytime after you travel or you explore, so I guess it isn’t as bad as it first sounds. Still, I would’ve liked to be able to save while exploring, so that I wouldn’t have to finish exploring everytime I wanted to shut down the game

After beating the game, I don’t think that the game has enough content to warrant a second playthrough, unless you don’t explore as much as possible during your first run, or unless you want to find everything you missed in the first time. The encounters will start repeating themselves and that detracts from the overall experience. With that said, I was surprised when I got to the ending and found out that I got the secret ending on my first playthrough. I guess I must’ve been really lucky.

In the end, the combination of a lovely aesthetic with a rather pleasant series of instrumental tracks help in smoothing the rough edges. Holy Potatoes! We’re in Space?! features some charming and humorous dialogue along with a very compelling combat system that is sure to please turn-based combat fans. Personally, I have no issue recommending it at full price, since it can provide quite a few dozens of hours of fun gameplay, even though it tends to start to feel repetitive after long play sessions.