Supergiant goes three for three with stellar music, visuals and a game which refuses to sit in a particular genre, neatly straddling sports, team tactics, and a visual novel that forces some incredibly harsh decisions throughout.

Supergiant much like Housemaque and Klei now have a style which is uniquely theirs, one that runs through each of their games that identify their “brand” of excellence.

Klei has an art style that regardless of the game you’re playing, you can tell it’s a Klei game, there’s something in the eyes I think of every character, there’s something in their facial expressions, it’s subtle, but every game has a DNA that is unique to their particular approach. Housemarque are similar, with their neon drenched, 80’s drug fuelled, electro scorched and incredibly tight shooters that show no mercy yet are somehow innately approachable regardless of your initial skill. So too now Supergiant join that exclusive club, bringing a specific style that makes them easy to identify, easy to notice, and with the quality of their games, easy to recommend. Almost too easy as it stands. These three developers are becoming the new Blizzards of the gaming scene, and with good reason, they’re each carving out their own unique space and they’re exploring and innovating in genres, making new what once was old. 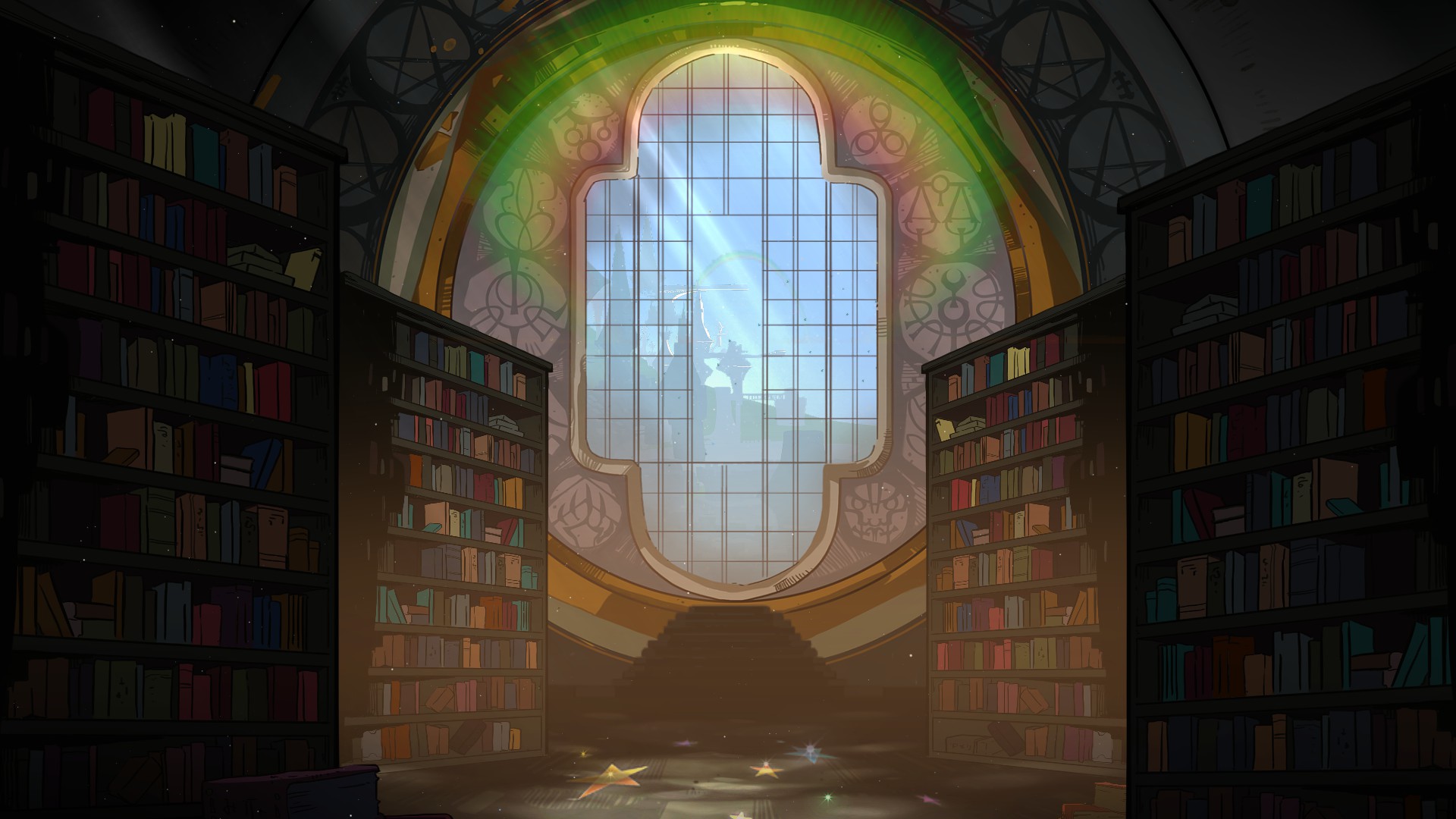 So we come to Pyre. One very large part Visual Novel, telling the tale of a group of exiles, criminals cast down from the Commonwealth above, forced to live in a barren, inhospitable world known as the Downside. One smaller part team-tactic slash handball slash Quidditch sport which requires you to learn the unique rules of the sport, make them your own and defeat your foes in order to earn the freedom of your own party. There is, however, a catch, a gigantic, evil catch in earning an exile their freedom. Once they return to the Commonwealth in glory, they are gone, and you are no longer able to use them in your team, and their loss will be felt by the other ones who are left behind. 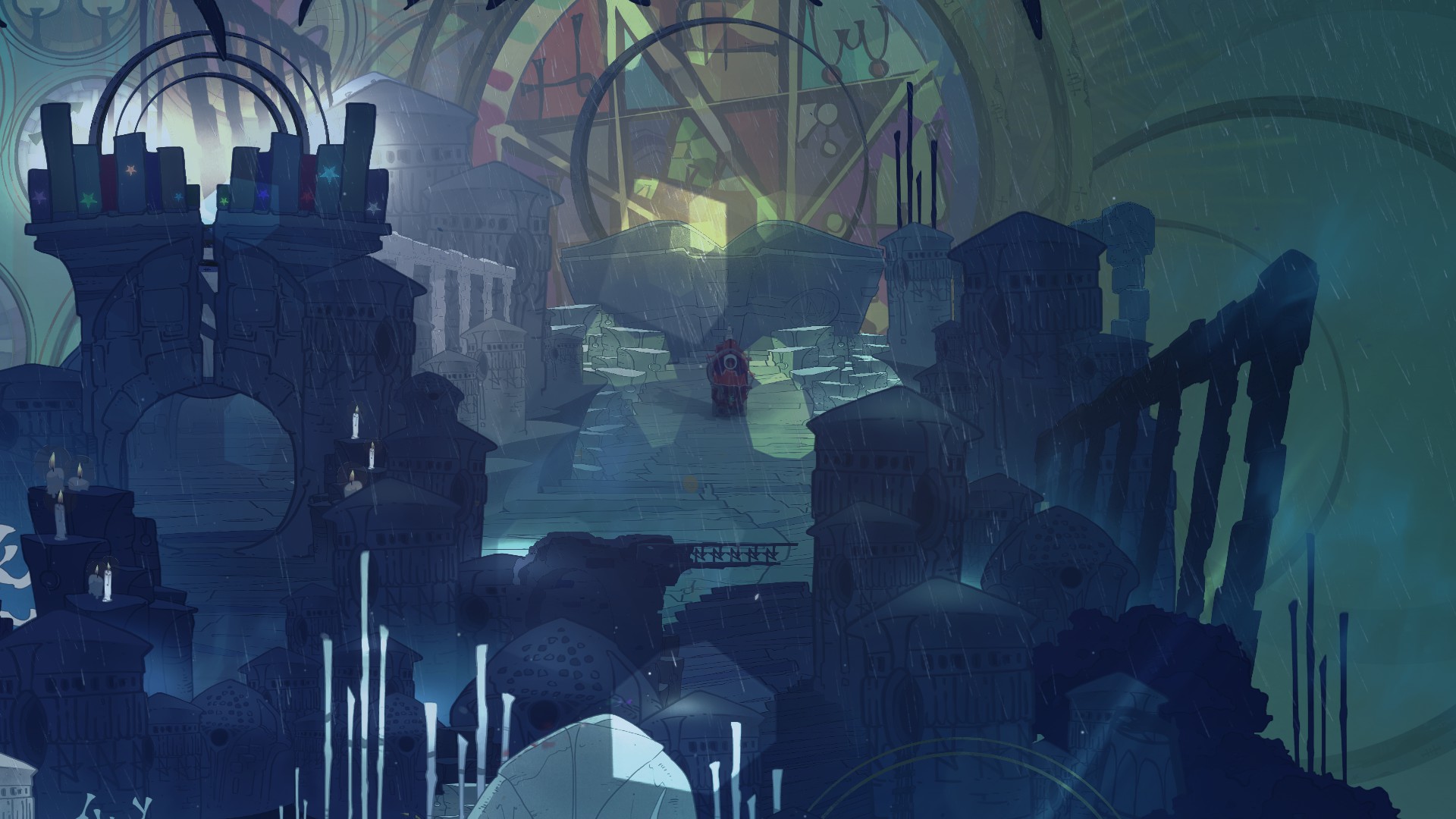 Needless to say, as a story driver it’s absolutely beautiful because it doesn’t happen once, it happens each cycle, so your team will dwindle, and you (as a player) will be left with fewer options, along with your team being slowly reduced to a band of stragglers. It means you have to decide between sending someone who deserves freedom, or sending someone less deserving because that same person is the lynchpin of your team strategy. It’s deliciously harsh in forcing you to make sacrificial choices as the game rolls on.

Supergiant games have been previously notable for a small cast which has been developed deeply, so this was something of a chance for the developer to take by introducing what’s known as an “ensemble” cast, but it’s paid off magnificently, with the various exiles having rich, interesting backgrounds and personalities, each of them having rivalries in the Downside as well as reasons to return to the Commonwealth (and in some cases, reasons to remain in the Downside). There’s a genuine sense that all of the exiles, even the one who gets introduced later on, have enough behind them to warrant further investigation, though some digging and some specific interactions have to be managed in order to find out the full story behind some of the exiles (In that sense it’s a bit like some of the more complex JRPG’s from Atlus, there are lots of possible paths, and a playthrough will by necessity close off some paths as you take others). 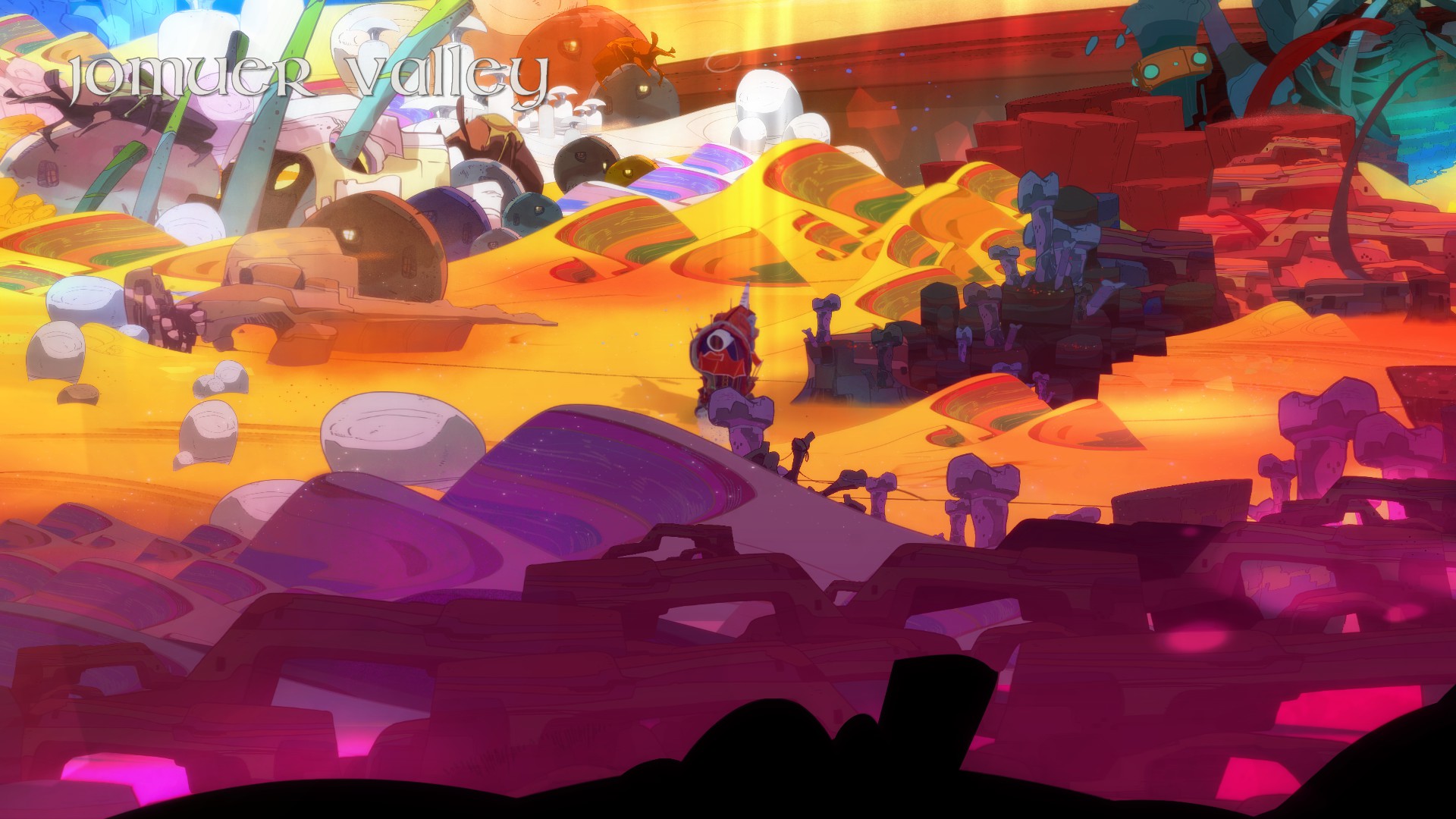 As a direct result, it’s essentially impossible to see everything in one playthrough, and each of the characters most definitely has more than one possible ending (at the very least all of the exiles will have a redeemed or Downside ending, not counting what transpires in their own personal stories). The adversaries you face too will have their endings change based on your own actions, so this becomes a very complicated ending based on your actions, one that depending on your love for the game could see you make multiple playthroughs to examine all the outcomes. In a final, minor yet entertaining twist, the song played out at the end changes depending on the choices you made and who you freed. It’s a neat touch that lends well to the flexibility of the game and the sense that the choices you made genuinely mattered.

The visual novel element is much more for exposition than for significant choices in the journey (with the exception of the liberation rite, that’s a massive choice you need to make each time and has narrative and gameplay effects), but is useful to understand the motivations and beliefs of your exiles, and perhaps how to help them come to terms with themselves before they are eventually liberated. In certain cases, you’ll be posed with using specific characters or activating specific things for a match for story purposes (and that can have much more significant effects down the line), or at other times certain characters will refuse to work with each other for personal reasons, or because of the fact they’re sea sick.

This forces you to adapt and overcome, though the rewards are usually worth the effort, as with the world itself, the character design is absolutely stellar, with a unique cast that defies most of the usual conventions. The fact most of them are non-human in nature I think really helps with seeing the stories and not just the faces, and in some areas actually, makes the stories that much stronger. 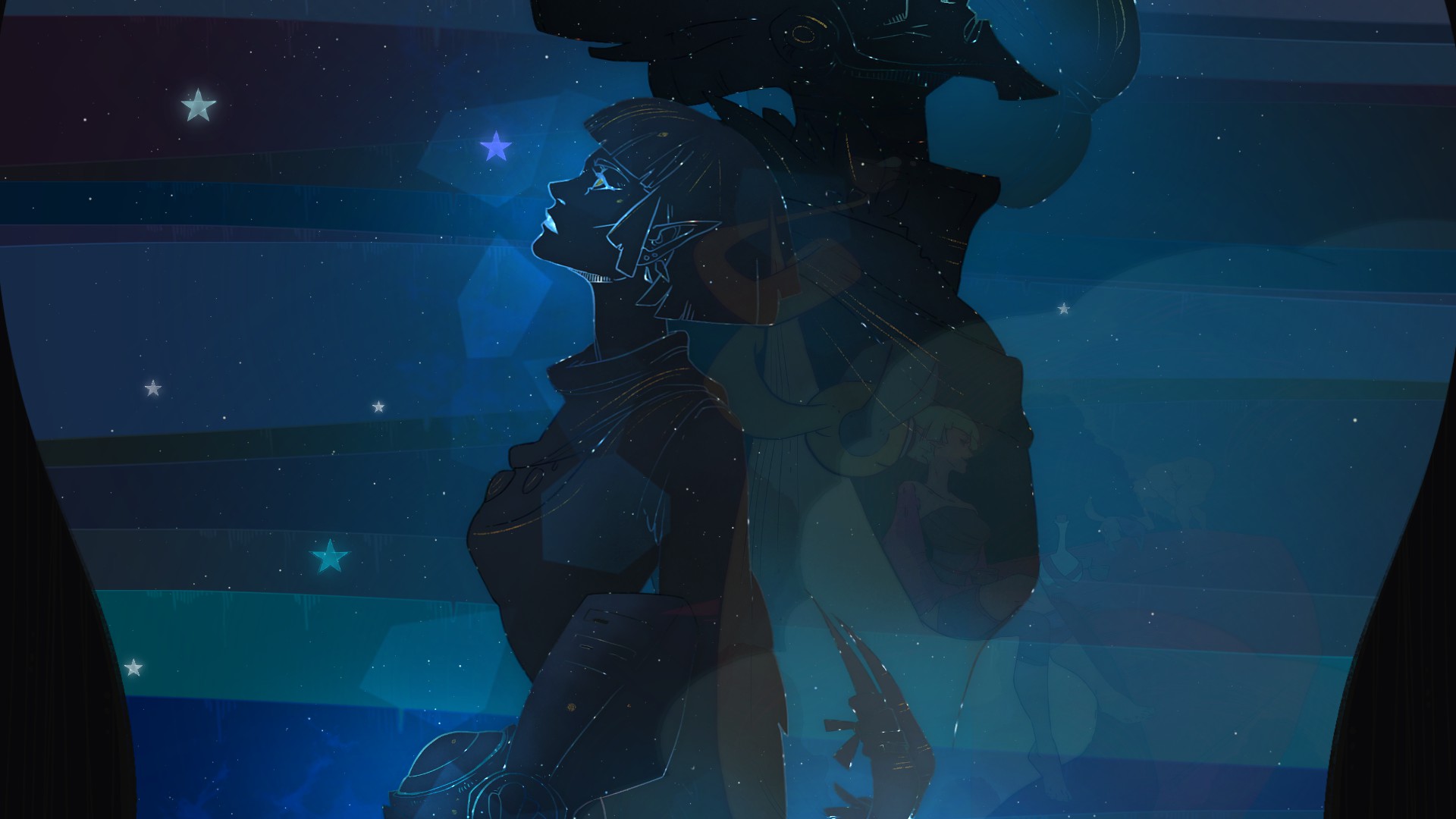 This would all be for naught if the actual sport (or as it’s called “The rites”) element of the game was for naught, as it turns out, Supergiant have done excellently with the design and creation here, with the player and AI working from the same rulebook, the concept is simple, yet at the same time actually pretty complicated if you bother to learn the intricacies. Each team is made up of three exiles, but you can only activate one of those three at any given time (as can the AI), in effect, the reader can only maintain focus and bond with one exile (“Three act as one”), but clever use of moving between exiles allow you to set them up so their auras and locations facilitate good defense and passing play should you have the orb, or allow you to control territory should you lack it.

Each of the exiles broadly has their own strengths and weaknesses (a few overlap to some extent, but this is useful for having solid foundations for a Triumvirate) and most of them have unique attacks and dodges which mean you’ll be constantly adapting (from the sublime *SPOILER* who can evaporate an enemy team wholesale with the right timing to the frustrating *SPOILER* who JUST WILL NOT MOVE FAST ENOUGH). Suffice to say, you’ll find your own favourites and ones you really want to bench, but here comes the real tension at the heart of the game. Only your top three by enlightenment earned are eligible for Liberation, so if you want someone out of your team, you need to play them. 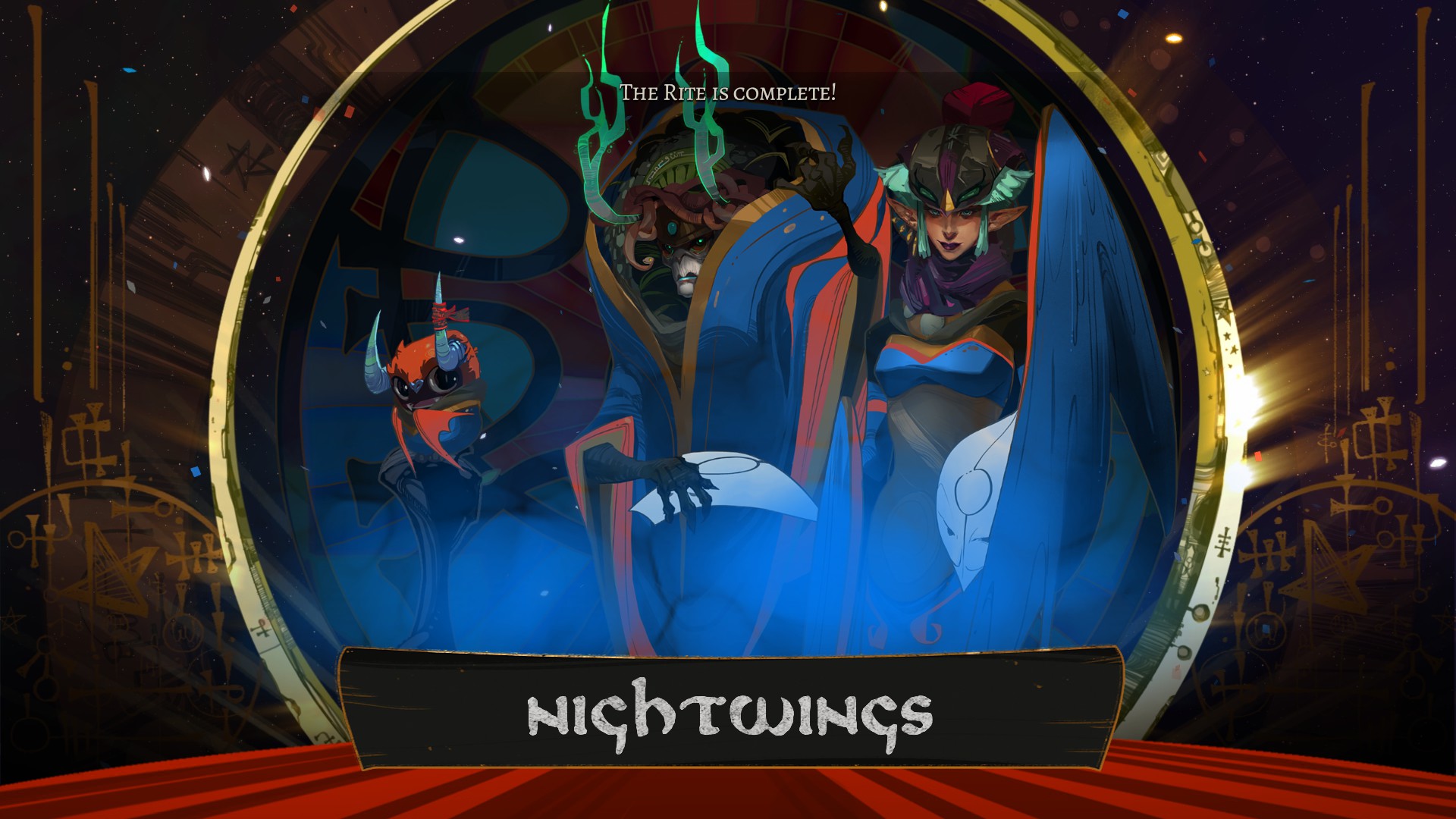 Sometimes, narratively you’ll want to keep someone in your team for the “right” time, and sometimes there is just no right time at all, so you’ll be forced into a heart-wrenching decision whether you like it or not. Other times opportunity and luck will align to allow you to Liberate someone who is “ready” and that will pay major game and karmic dividends, but you have to weigh your choices, even the ones that -seem- right because it’s not always obvious when someone is ready to be sent back to the Commonwealth, covered in glory.

This game is dense in terms of narrative, and the core game “sport” is good enough to serve as filler between what is a genuinely interactive book, one that challenges you to make hard decisions at times, even to the extent of which games you win, and which games you lose, because losing isn’t the end here, in fact it can open up significant new story pathways that otherwise you might miss. There isn’t exactly a perfect ending (indeed, the game ensures that it’s borderline impossible to achieve one, but you can get a good approximation of perfect, with a lot of careful planning). There are, however, many shades of bittersweet and ,unusually for an RPG, it’s entirely possible to mess things up to such an extent that things go badly wrong for everyone, including you. For once, you have to earn your happy ending.

Final Thoughts : Supergiant score a third home run with this game, it’s a brave move to step outside of their ARPG wheelhouse, and I applaud them for it, because in doing so, they’ve shown they can be more than just “The guys that can do great ARPGs”, they’re now “They guys who make unique, interesting games that really challenge the medium” and too few developers go to that length these days. This is well worth your time, and your money, particularly if you’re into Supergiant’s style and music.