This is a 4X-Lite game with card-based powerups and blistering real-time fleet battles which last only a matter of seconds, with fighters, laser beams and explosions galore!

To give you a rough outline of what this is about, you take on missions to conquer networks of planets. Each turn you send your little spaceship fleets to battle with the enemy fleets on the adjacent planets and then once you’ve defeated them you can invade the planet with a big dice. You get gold income from conquered planets which you can use to purchase new ships for your fleets, and crystal planets increase the number of points you can use to play your powerup cards which are added to your ‘hand’ on each turn. Domination is the ultimate goal, of course.

There is a LOT happening all the time in this game, so I’m going to try and explain this with screenshots.

First you choose your faction. As you can see, I haven’t even unlocked the second one yet. 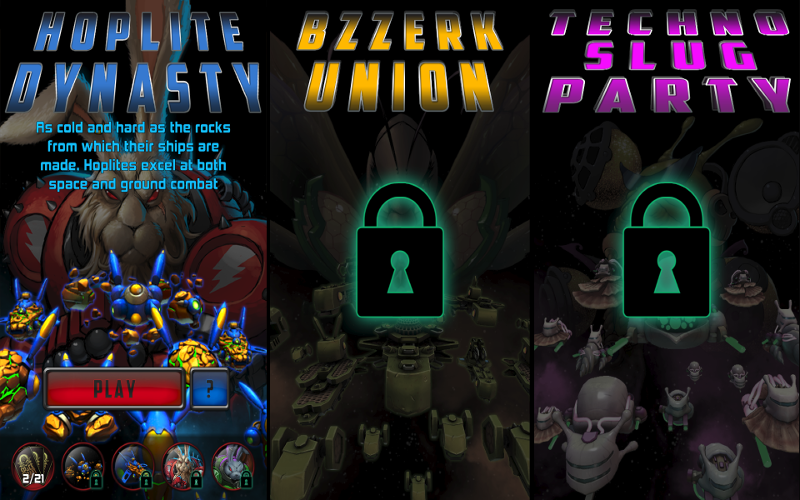 Then you select a mission. Each has a 4-star rating depending on difficulty. Take note of the ‘SENATE CONTROL’ boxes. I found to my cost that if those four boxes fill up with red triangles, it’s Game Over, so don’t just blindly go for the easiest missions like I did 🙂 When you successfully complete a mission you get a skull. Fill everything up with skulls and you beat the campaign. 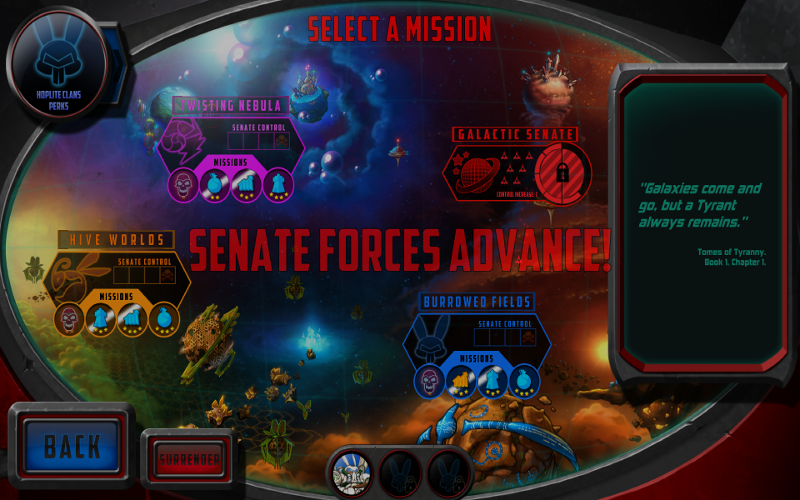 So when you start a mission you’re told what your goals are to win. There are various different objectives each time, like conquering special planets, amassing gold, conquering a certain percentage of the galaxy etc. 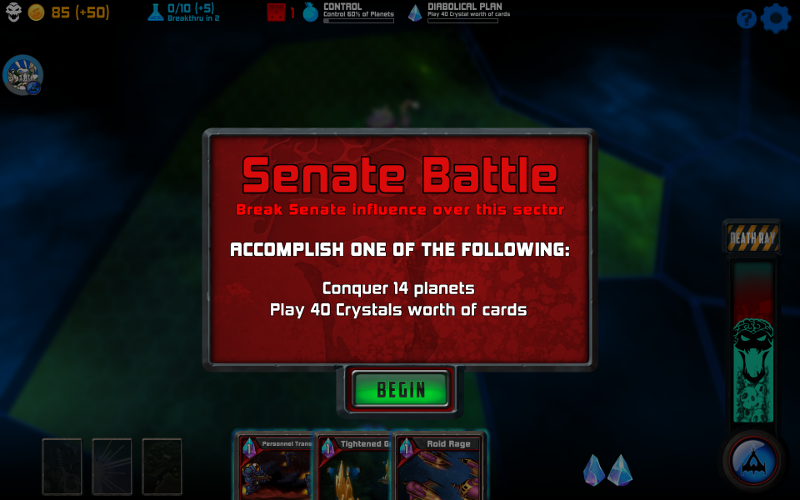 At first you have only your home planet and a small fleet. The best thing to do is go on the attack immediately! Move to the next planet where an enemy fleet is orbiting and the battle screen will open. 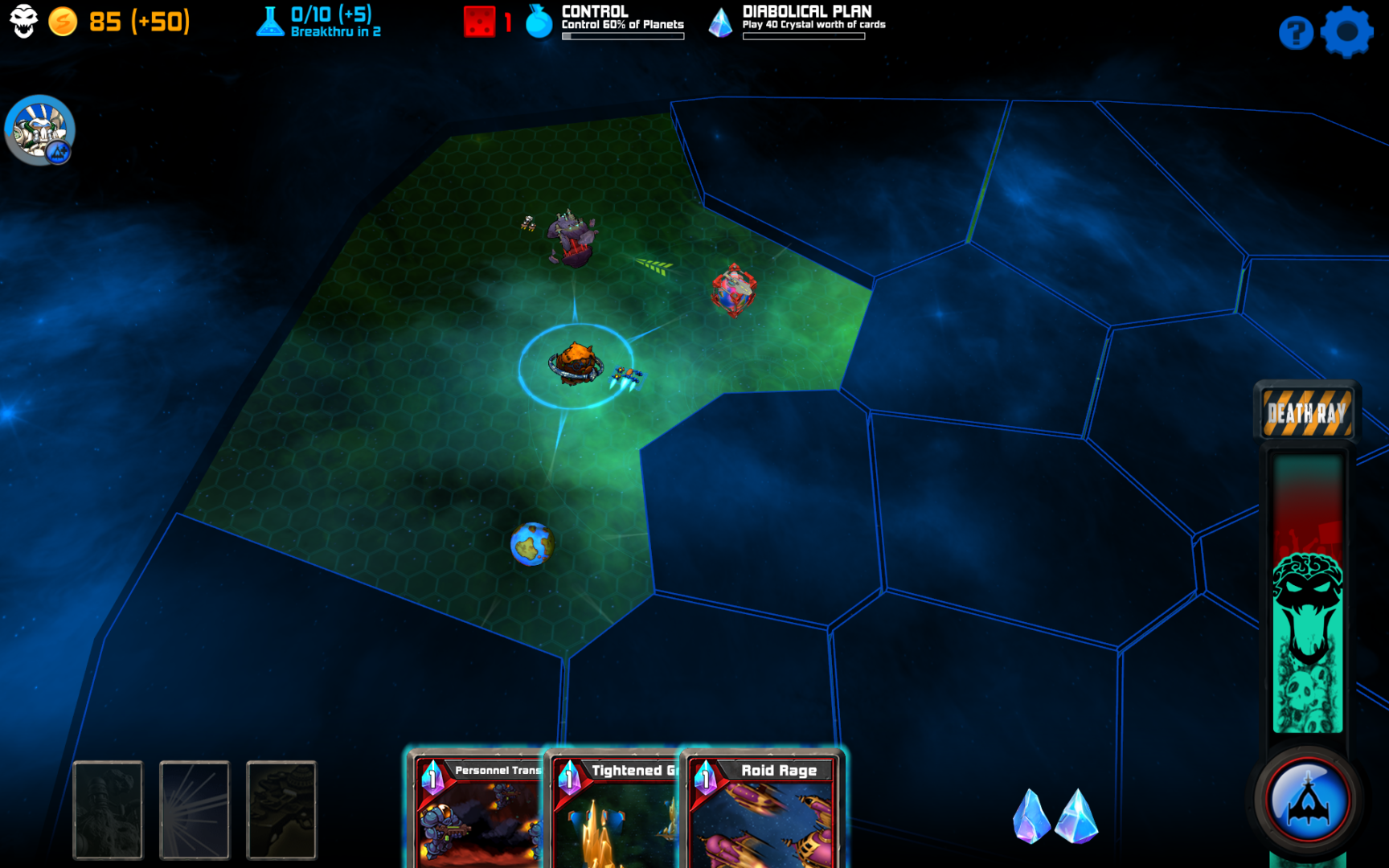 Note the Death Ray over on the right, it measures your Tyranny. It goes up and down depending on how quickly you’re expanding your empire and obliterating any fleets that dare to join the Senate. If any of your fleets stay in one place for too long – well, at all actually – you’ll pay the price here. You have to keep relentlessly crushing agitators and moving on to keep the Death Ray topped up. If it drops too low it’s Game Over – not just the mission, but the whole campaign! If you get it up high enough then a big red button appears and you can zap a few enemy ships with the big pointy finger in the sky!

The cards at the bottom of the screen can be played at any time during your turn. Each shows the number of crystals you need to have lit-up before you can play them, from one to four crystals. If you have too many in your hand you have to either play or discard them, so you always try to play them whenever the opportunity arises. For me, the most useful ones are the ‘-2 planet defence’ which can be used to finish off an invasion if your dice doesn’t quite make it. 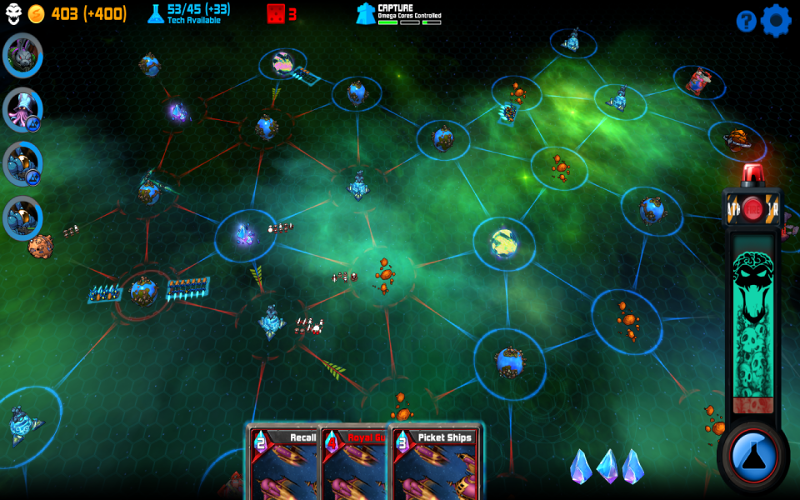 The next images are from a more advanced stage of a mission so I can show you some nice big fleets in action, but they all start the same by offering you a choice of three random tactics which you can apply once during the battle. Then you’re off! Large ships will start firing on their own but the smaller ones you have to click to activate. There’s a power bar at the top which constantly fills up and you have to spend your power by clicking each of your ships to activate a special power or to make it fire. It’s important which order you choose to activate your ships. For example, I often activate all my small destroyers first to get some volleys going quickly, then wait for the larger powerbars of the cruisers and carriers to slowly fill up for some devastating finishers.

The trick, of course, is to never go into a battle that you can’t win! If you have a bigger fleet going into the battle then you’ll (nearly) always win.

Battles are fast and furious! Look at all this! These battles generally only last about 15-30 seconds, it’s intense. Blink and you’ll miss it! 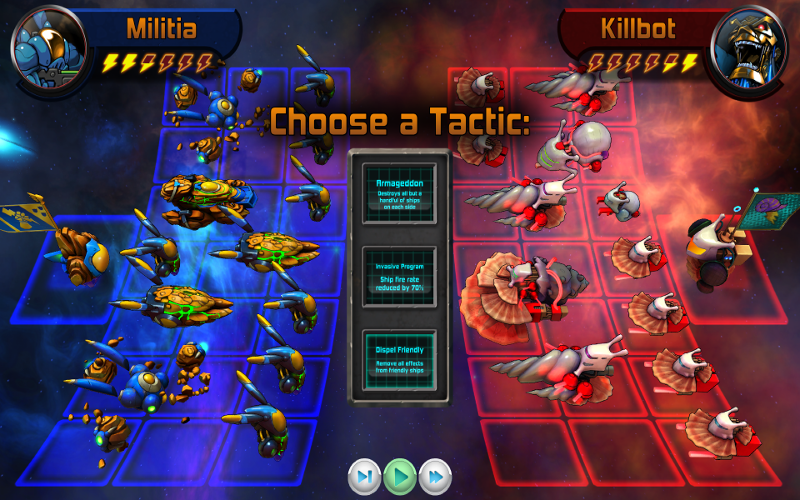 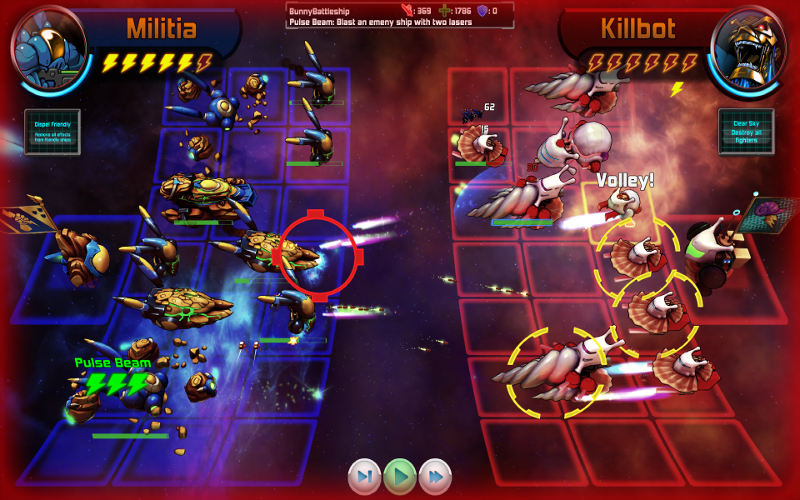 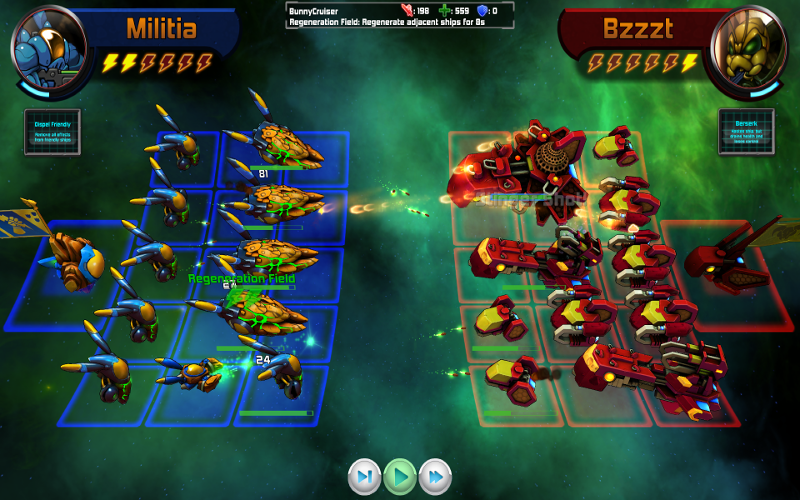 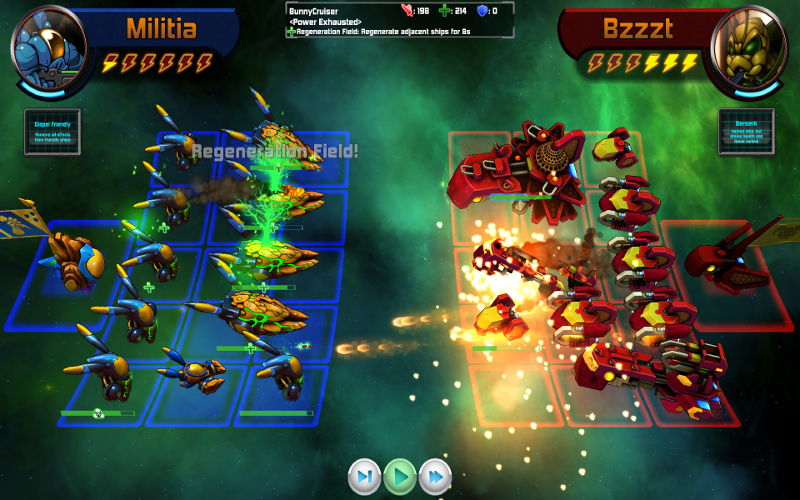 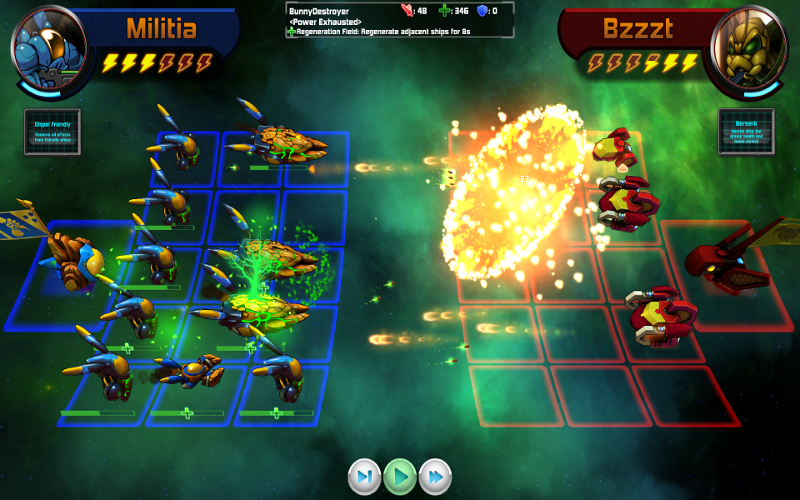 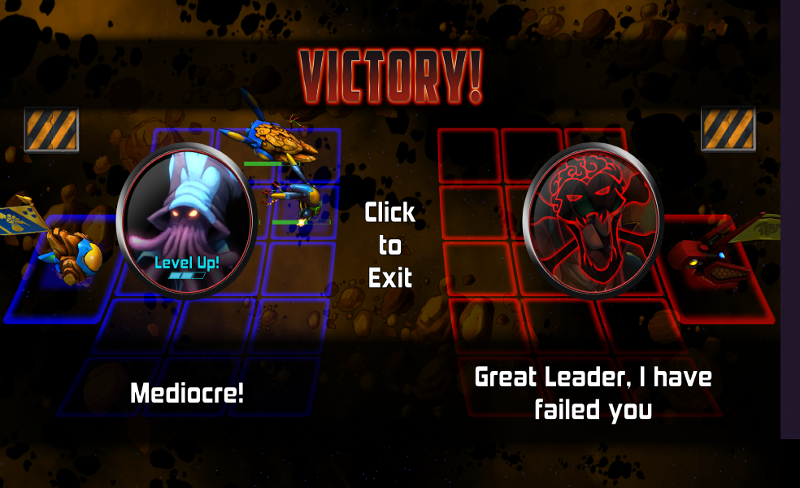 … and eventually you’ll get a bigger fleet: 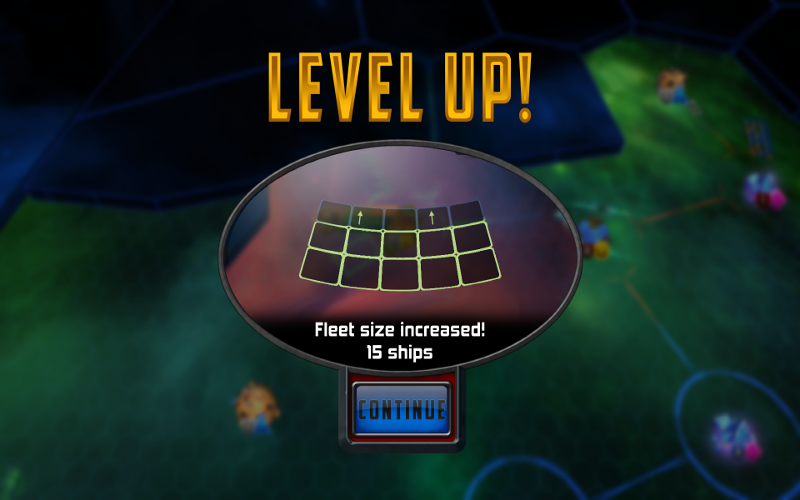 Once you’ve defeated the enemy fleet you can then capture the planet for your empire by rolling the dice. The planet has a set number of points you have to conquer, and the dice, despite being a cube, only seems to have 5 sides – I’ve never rolled a 6!

UPDATE: Dice have been PUMPED UP to MAXIMUM INVASIVENESS! Tired of having punk rebels or puny neutrals kick sand in your face-hole? Our NEW combat dice go all the way to SIX! 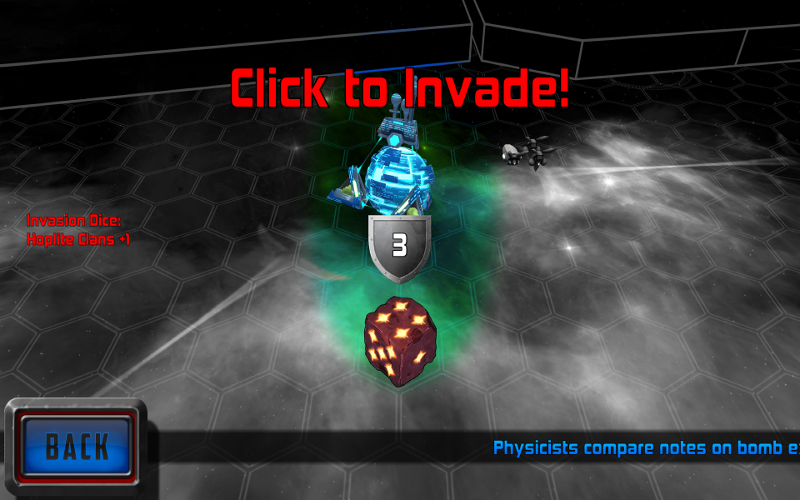 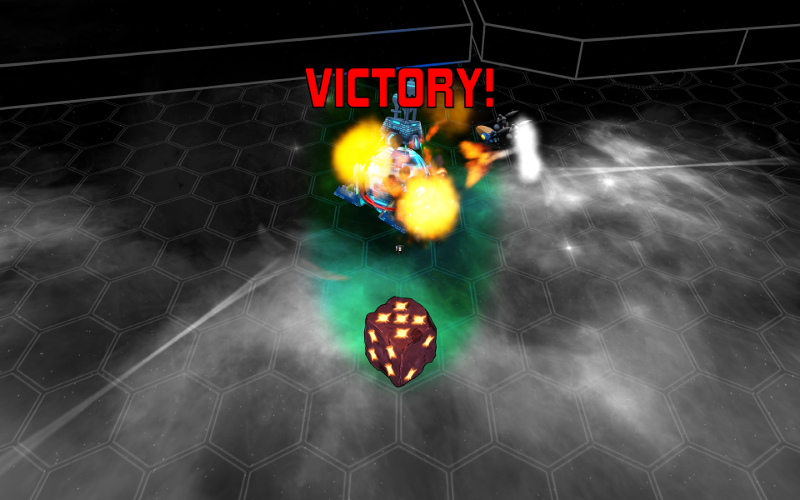 When the planet is conquered you get a few choices of planet exploration, some have good outcomes, others bad. You get to know these dialogs after a while but the outcomes are randomised so you don’t necessarily always choose the same options. Some outcomes can be quite extreme but most are minimal or completely neutral. 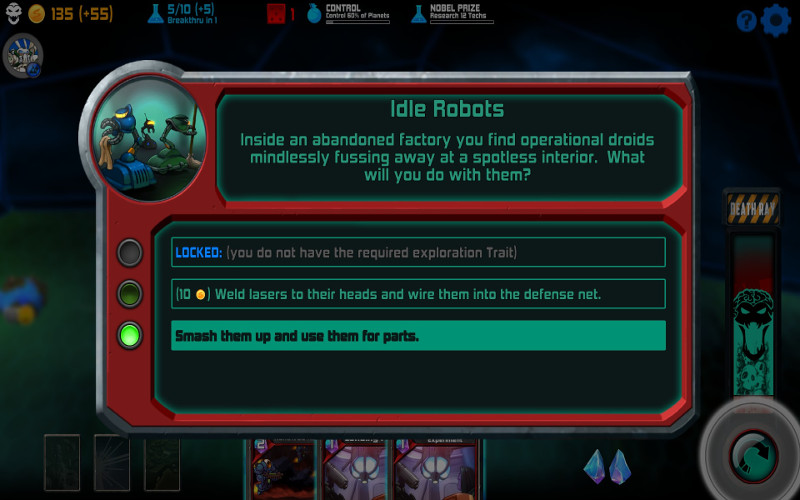 So you continue like that, conquering one planet after another. You can release new fleets by conquering prison planets, hiring a new commander from your home planet with 300 gold, or get them for other reasons. Like I said there’s all kinds of stuff going on.

Hopefully you’ll eventually reach your objective, complete the mission and receive your reward and a perk: 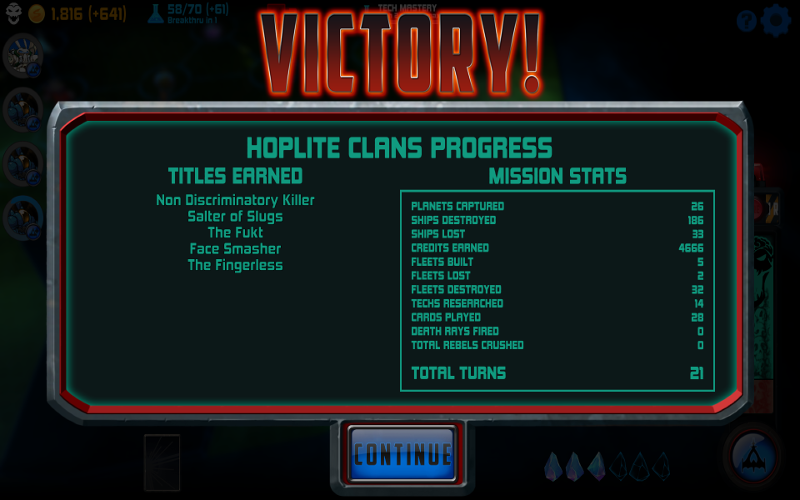 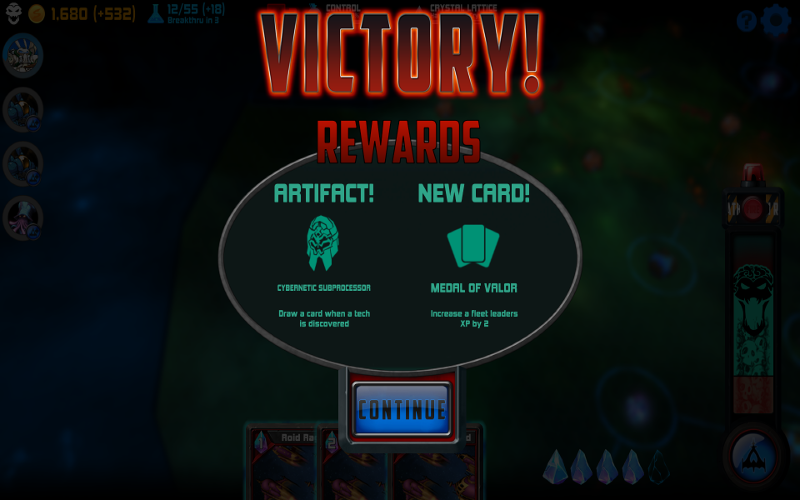 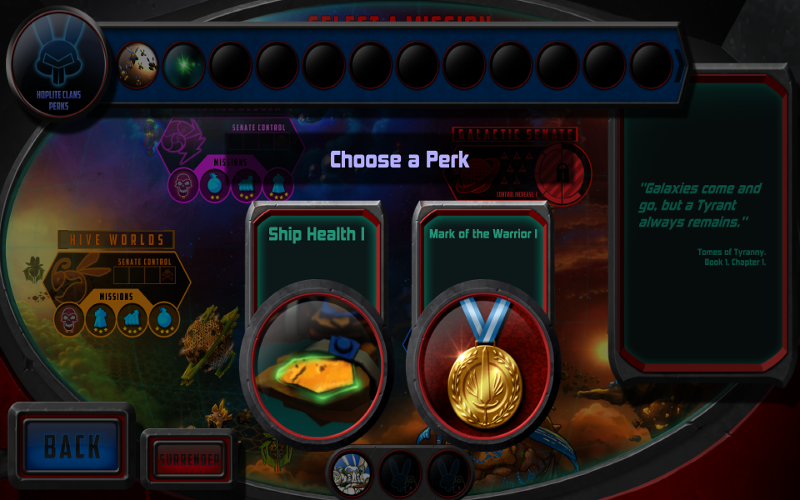 … then it’s on to the next mission.

All in all, it plays like the turn-based strategy version of DOOM – you’re rewarded by pushing forward relentlessly and taking undue risks. Glorious death is rarely in vain as you’ve softened up the enemy for your next wave.

The AI is absolutely diabolical! And I love it! Three times now my campaign has been suddenly and unexpectedly halted in mid-flow while I wasn’t paying proper attention. Each time I was kicking arse and taking names in my missions, vanquishing foes left, right and centre. Then they stabbed me in the back. The first time an enemy fleet sneaked up behind me and took my home planet while I was too busy cutting a swathe of devastation elsewhere. The second time I got busy making my home planet into an iron fortress, ignoring my Death Ray which plummeted until the galaxy rebelled and it was Game Over again. The third time I really thought I had everything covered this time. Nope. It turned out that I’d picked the wrong missions and allowed the Senate to take over a sector without me even trying to defend it!

Each time this happened you’d think I would storm off in a huff, but no. I was grinning from ear to ear and raring to go again, shaking my fist in the air like Grandpa Simpson. There’s nothing quite like discovering something genuinely surprising in a game. Fabulous. 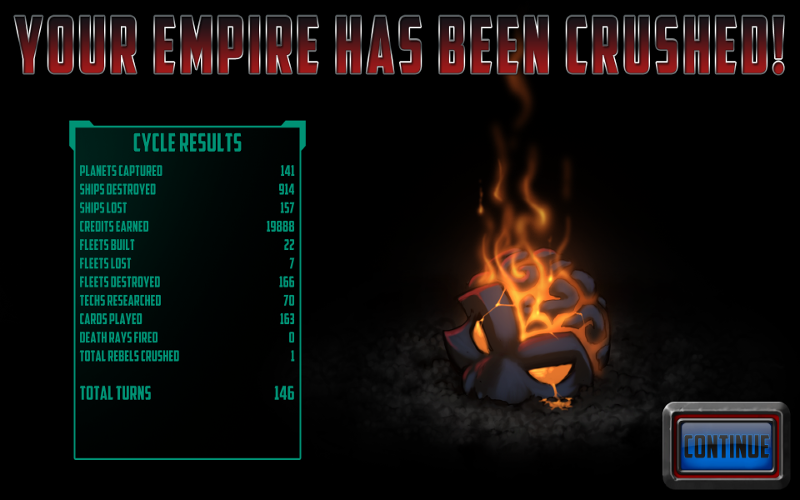 The list of things I love about this game is pretty long, but right at the top of it is the way the learning curve is handled. From the moment you start playing the fun never lets up. At first it’s just joyous chaos, with things popping up all over the place, decisions to make, tips to follow and generally not knowing what the hell is going on. Mad as a box of frogs. Slowly but surely you get the hang of it, and before you know it you’re planning routes, counting ships, calculating your odds and turning into a proper Tyrant. Until the AI blindsides you, of course. Haha!

There are no overall difficulty settings, it just becomes increasingly difficult as you progress, with one to four-star missions. The more experience you get, the further your campaign will go.

There are three main factions to play. When you beat a full campaign then the next faction is unlocked and you can start all over again with, I assume, different powers and so forth. The third faction is not ready yet, and will be a main feature of the full release after Early Access. With that said, each mission can take up to a couple of hours to get through – and the time really flies! It’s going to take me many hours to even beat the first campaign so there’s more than enough to be getting on with already. This feels like a full, complete game. I’ve found no bugs, no annoyances but plenty of gameplay. It’s definitely worth full price even at this stage. The EA phase here is just for adding extra goodies to the pile.

There are no trading cards or achievements yet but they will be in the full release. Please don’t let this put you off in any way. There is personal achievement to be had in beating these missions, never mind about Steam.

I’ve played enough slow, tedious turn-based strategy games to know that this one stands out due to the fast-paced, exciting combat that keeps you constantly engaged and trying to push the boundaries of your power against a fairly clever AI. It’s challenging and addictive while the gameplay is intuitive once you get into the swing of it. The artwork and music make it even better, and the native Linux version is the cherry on the delicious cake.

After 60+ hours of trying I finally managed to beat the first campaign! Yay! I had to beat the final five-star mission and capture the Senate’s home planet to do it. I’m a proper, legit Tyrant now I thought, so I started a new campaign and decided to be cocky and go for the enemy’s home planet. This was a one-star mission, easy peasy right? Well, I was brought crashing down to Earth when my own home planet was invaded. It just goes to show, a Tyrant must be vigilant at all times, there are always agitants plotting and scheming behind your back. Seriously though, there is endless replay value here – ruling the galaxy once doesn’t guarantee a repeat performance. 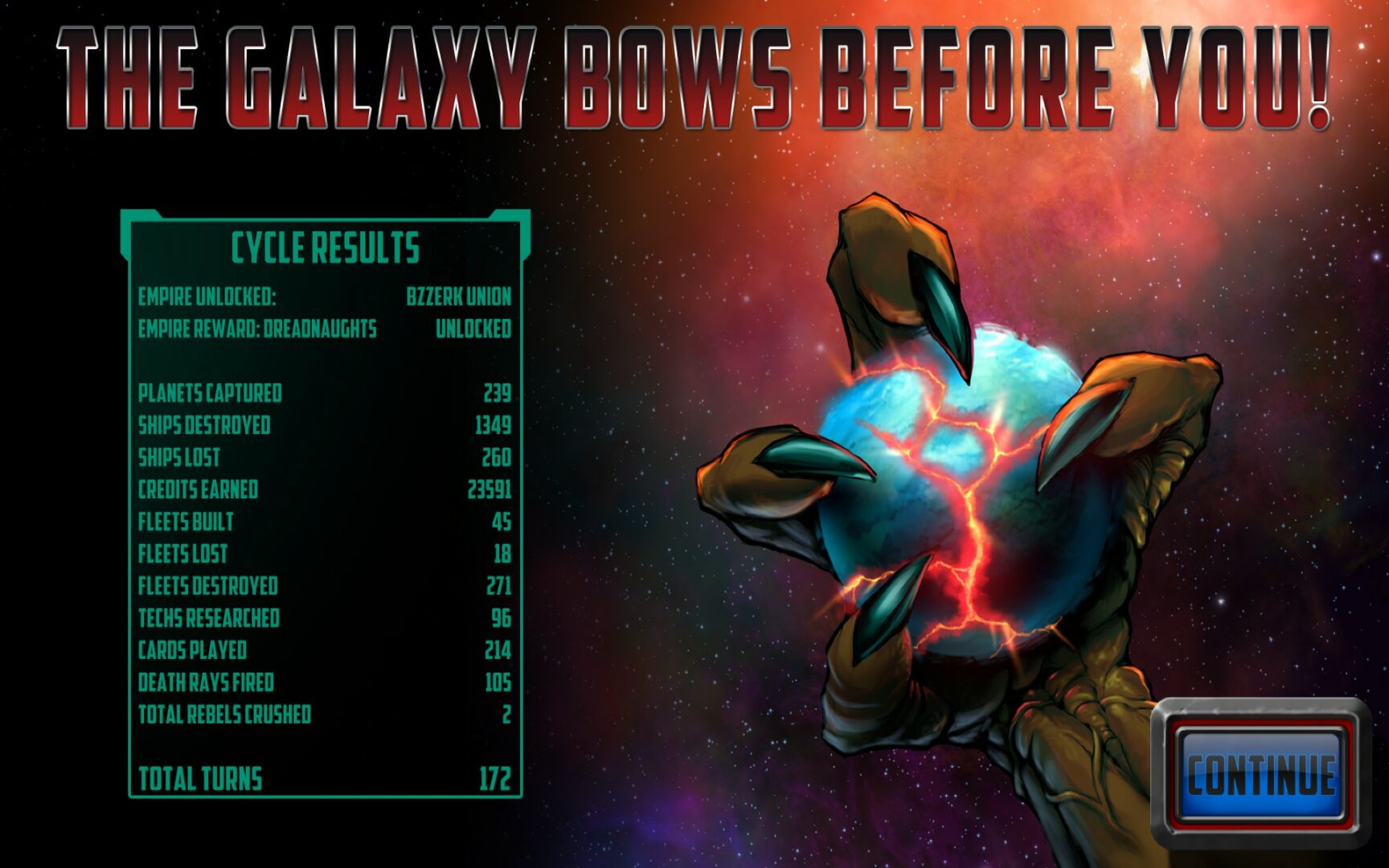